Arjun Erigaisi made a fantastic comeback to the top of the points table 25.0/36 after finishing the first day at eighth place. He scored three wins and a draw on the penultimate day. The reigning National Senior champion defeated Abhijeet, Iniyan and Abhimanyu, drew with Lalit. Raunak Sadhwani is at a sole second place 22.0/36. He took a no-draw approach on the third day of MPL Indian Chess Tour leg 1. He defeated Adhiban, Surya and Leon. His only loss of the day was against Harika. Abhimanyu, Narayanan and Gukesh all three of them are at 21.0/36 each. Round 13 starts today at 3:30 p.m. IST. Photo: Aditya Sur Roy

From eighth to the top

Leon Luke Mendonca got himself a great opportunity to be in the title fray, if he managed to seize his opportunity against Raunak in the final round of the day. A loss put a tall task in front of him on the final day. India no.4, Arjun Erigaisi after starting the tournament only 5.0/12 on the first day, managed to rack up six wins and two draws means 20.0/24 in the next two days to become the sole leader. He is now seven points away from winning the tournament.

Adhiban's phantom attack on Raunak Sadhwani's kingside turned out to be futile. 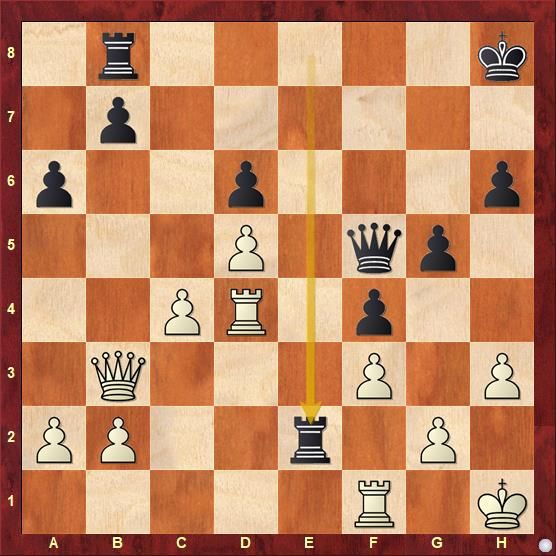 Abhijeet Gupta casually sacrificed an exchange without any definite compensation against Arjun Erigaisi. 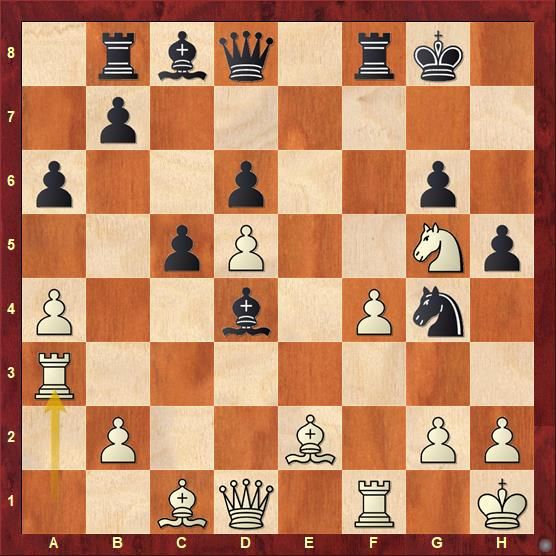 20.Ra3 does not assure any attack for White. Instead 20.Bd3 would have had some real threats on g6. 20...Nf2+ 21.Rxf2 Bxf2 22.Ne6 and White managed to equalize in the next few moves according to the computer. However, in practical terms it was certainly not easy for White to play the position with an exchange down. Soon Black eliminated all threats and got a winning position.

Iniyan created a sharp attack against Arjun Erigaisi. It actually does not work. 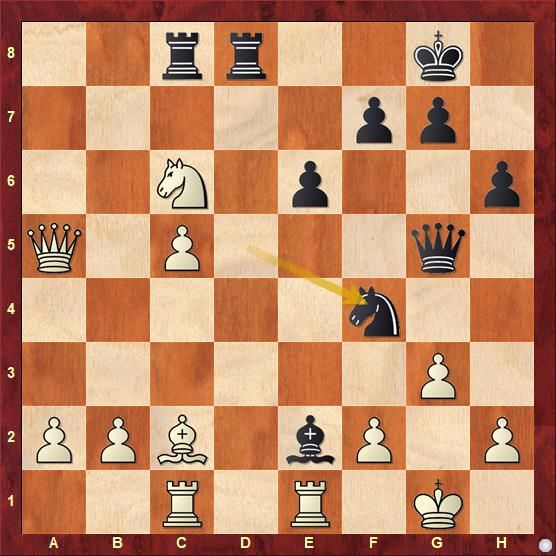 Black is making some deadly threats 27...Nf4. Find out the winning continuation for White.

Surya Sekhar Ganguly made an incorrect decision to not castle which stranded his king at the center of the board against Raunak. 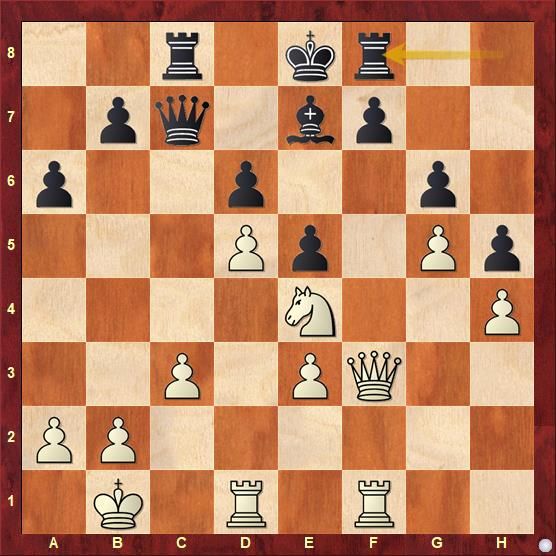 Arjun won a rook and bishop vs rook endgame. Abhimanyu blundered on the 19th move. He had 31 more moves to survive. 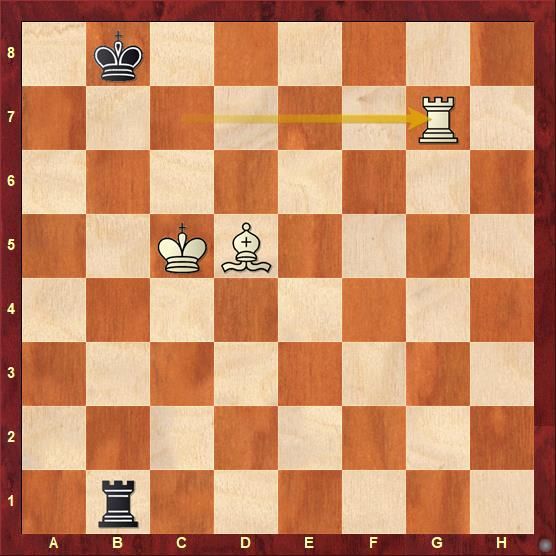 Theoretically the endgame is a draw. However, practically it is incredibly difficult to save, especially when you are down to the last few seconds. Black blundered 89...Rc1+ and lost the game in the next few moves. Find out what Black could have done to survive.

Leon got a fantastic position against Raunak. 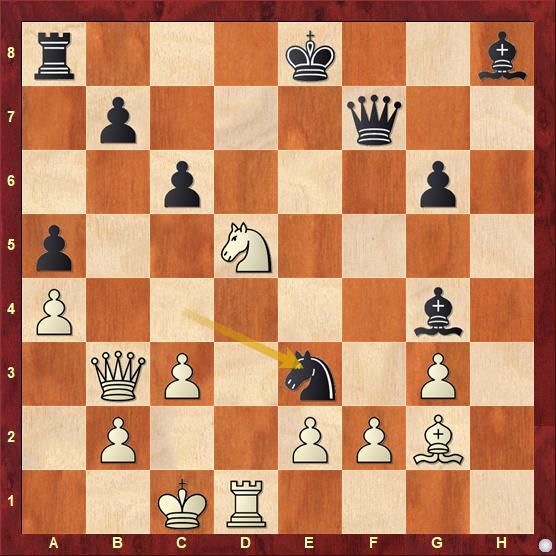 White played 21.Nc7+ Kf8 22.Qxf7+ Kxf7 not only the attack diminished but also trapped his own knight at the corner 23.Nxa8 Nxd1 24.Kxd1. Instead 21.fxe3 maintains the upper hand for White and he should obviously not exchange the queens. Raunak went on to win the game and finish the third day with 22.0/25 score. 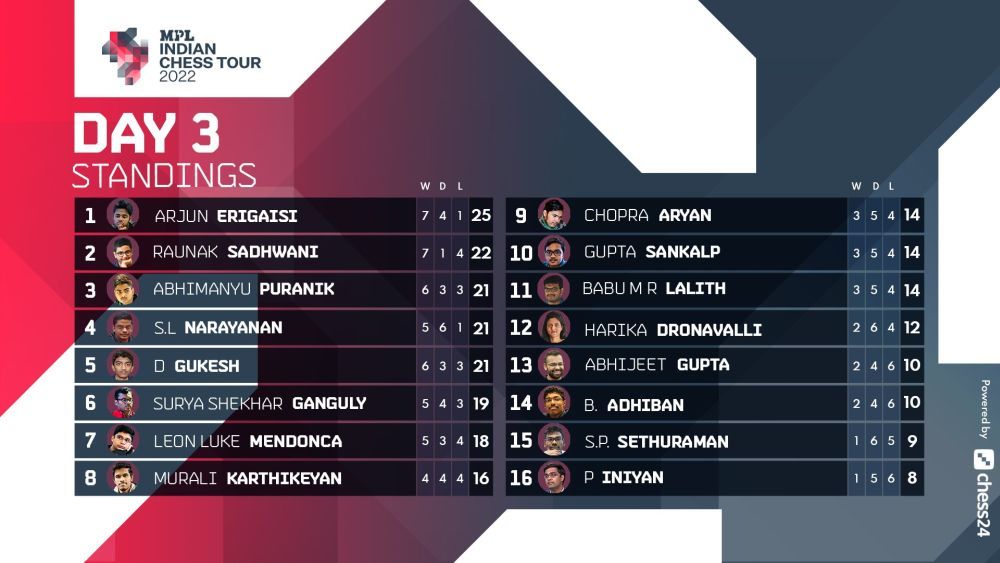