Narendra Modi, as we all know, is a busy man. However, on 16th of October he took out time from his busy schedule and met 10 chess players! Why? Well, these are the heroes of Indian chess who won a medal for our country at the Asian Paragames that were held in Jakarta, Indonesia from the 7th to the 12th of October 2018. This was the first time that chess was included in the overall Asian Paragames. The medals won by our physically disabled and visually challenged players would go to increase India's overall medal tally. From 72 medals that India won at the games, nine of them came from chess. We won two golds, five silvers and two bronze. Jennitha Anto and Kishan Gangolli are the golden duo for Indian chess! Chief Arbiter of the event R. Ananthram has sent us a detailed report.

Kishan Gangolli and K Jennitha Anto brought cheers to the Indian chess contingent by winning gold medals in the Visually Impaired and Physically Handicapped events of the recently concluded Asian Para Games held at Jakarta, Indonesia. Jennitha added one more silver medal to her collection and India secured five silver and two bronze medals in the team standings. India finished fourth in the overall medal tally in chess and ninth in all the sports combined. 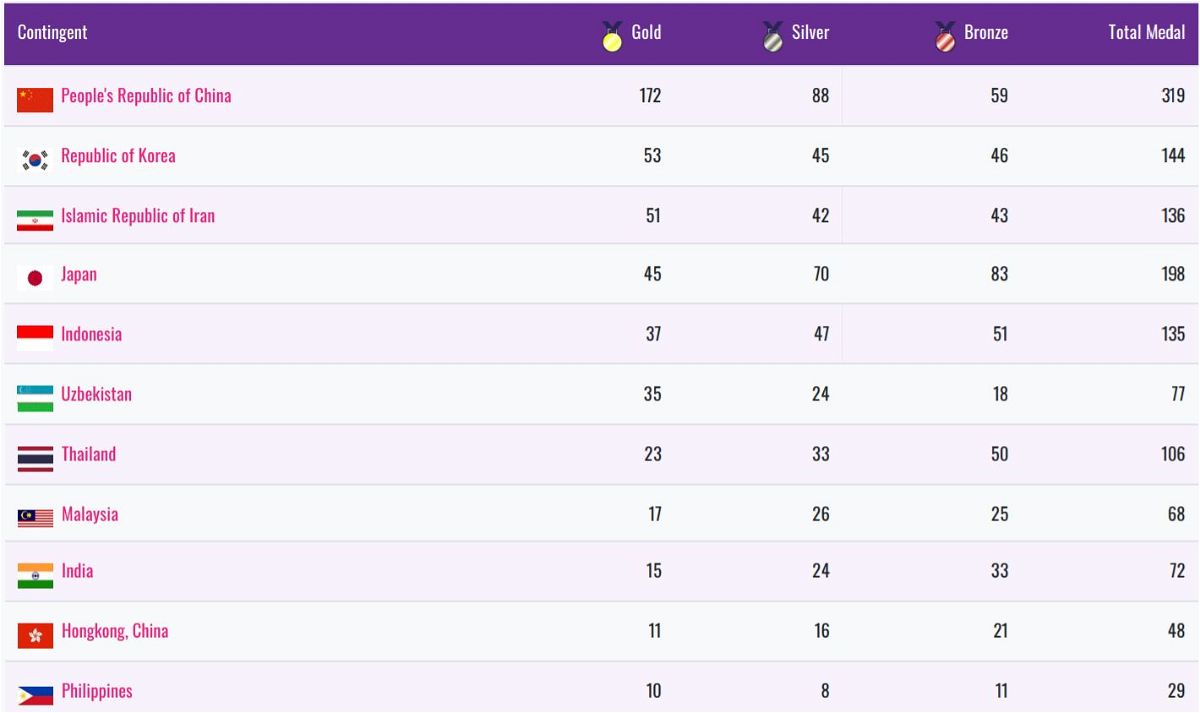 India won 15 gold medals and chess contributed two to it! 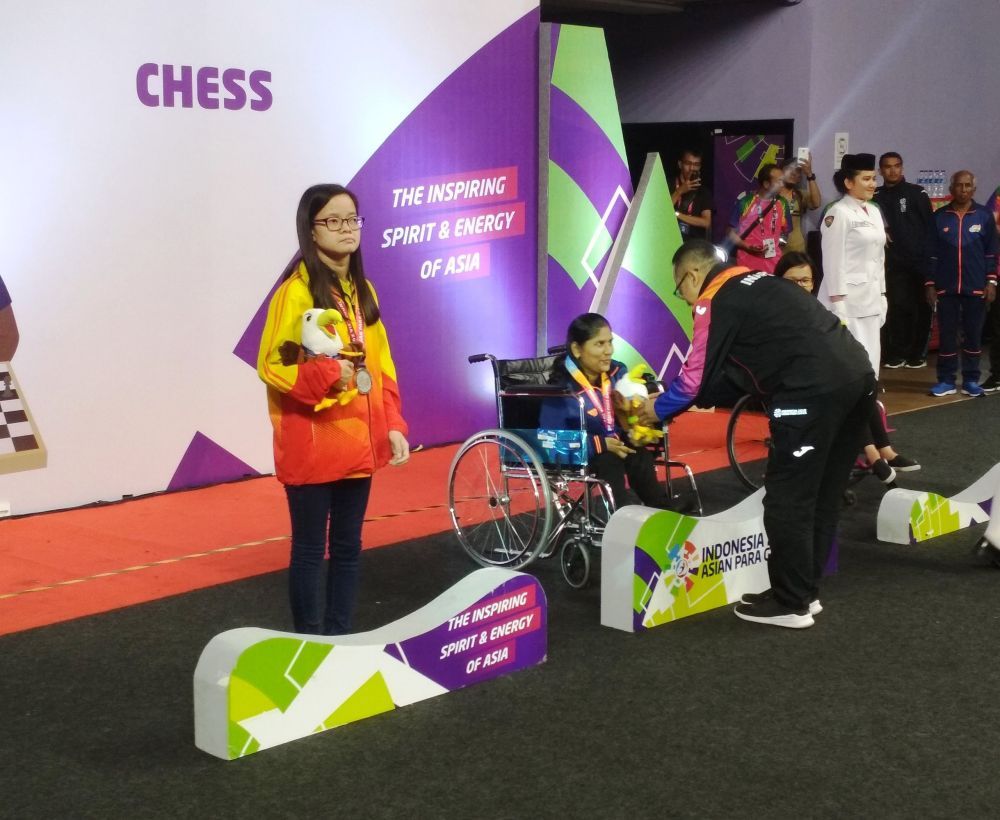 Jennitha receives the gold medal for winning the Championship for the Physically Impaired category. She was also the winner of the silver medal in the Standard event The Asian Para Games which included chess as one of the events, consisted six categories – Standard and rapid events of Total Blind (B1), Visually Impaired (B2, B3) and Physically Handicapped (PI) for men and women. A total of 86 participants from Indonesia, India, Iran, Myanmar, Philippines Timor Leste, Vietnam, Kazakhstan, Sri Lanka vied for the honours. The Standard and Rapid tournaments were comprised of seven rounds each. It had one international master in the event – the 2017 IPCA world champion Shashikant Kutwal of India. WIM Jennitha Anto, who won the IPCA world championship for women five times added charm to the tournament. The 2017 national champion for the physically disabled, Venkata Krishna Karthik was also one of the participants. 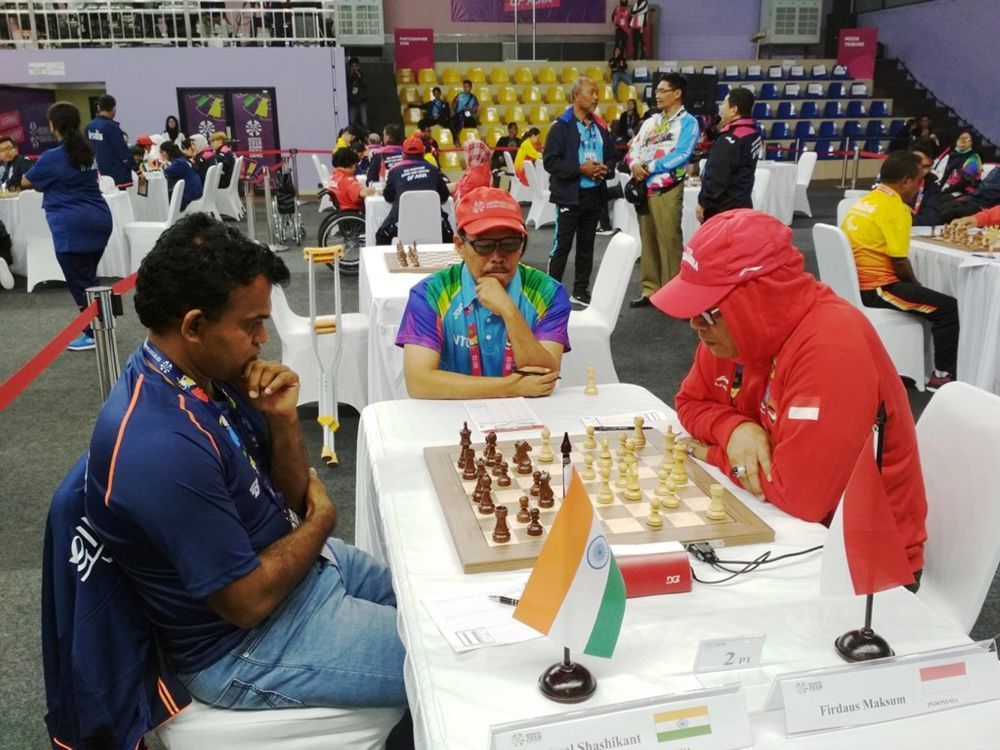 Shashikant Kutwal of India was the only IM in the Games

The only bright silver lining for the Indian contingent in the Standard event was the silver medal won by Jennitha Anto with 5.5 points, half a point adrift of the winner Simanja Nasip Farta of Indonesia.

In the Rapid event, Jennitha and Doan Thu Huyen tied for the first place with six points each and the higher Buchholz score helped the Indian player to win the title. 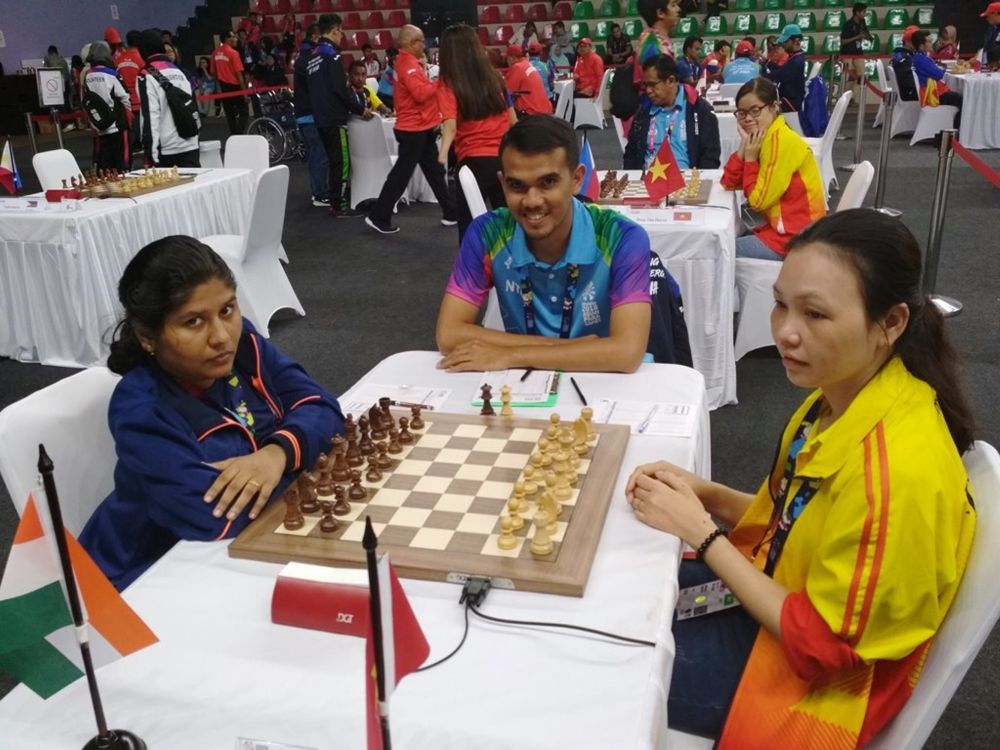 In a similar fashion, Kishan Gangolli and Satrio Gayuh of Indonesia had 5.5 points at the end of the tournament and Kishan emerged winner because of better Buchholz score in B2+B3 rapid. Kishan Gangolli (left) won the gold in the rapid section 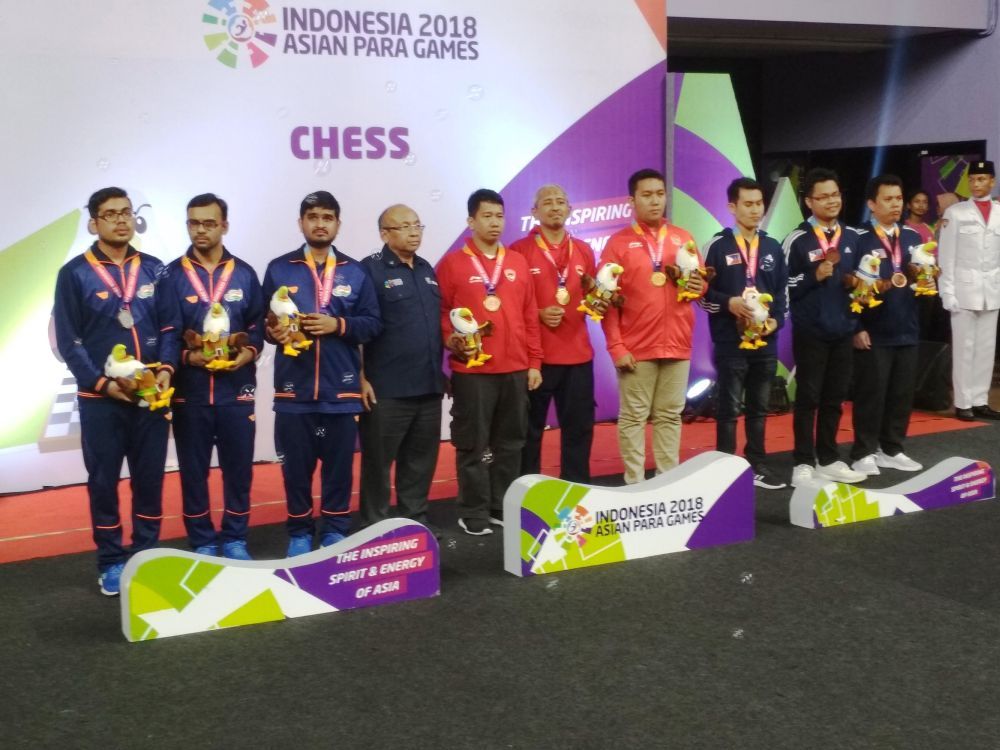 Kishan also won a silver medal in the team event, together with Ashvin Makwana and Pradhan Soundarya Kumar

The team medals were based on the performance of the best two players from each federation in each category. India won four silver and two bronze medals, all silver medals coming from the Rapid tournaments. The host Indonesia finished on top with 22 medals (11gold, 5 silver and 6 bronze) out of the 70 medals delivered. Two bronze medals were not delivered due to insufficient number of teams in some categories. Though China, the major power in chess secured an amazing 172 gold medals (out of 507) in the entire Asian Para Games, it did not participate in the chess event. 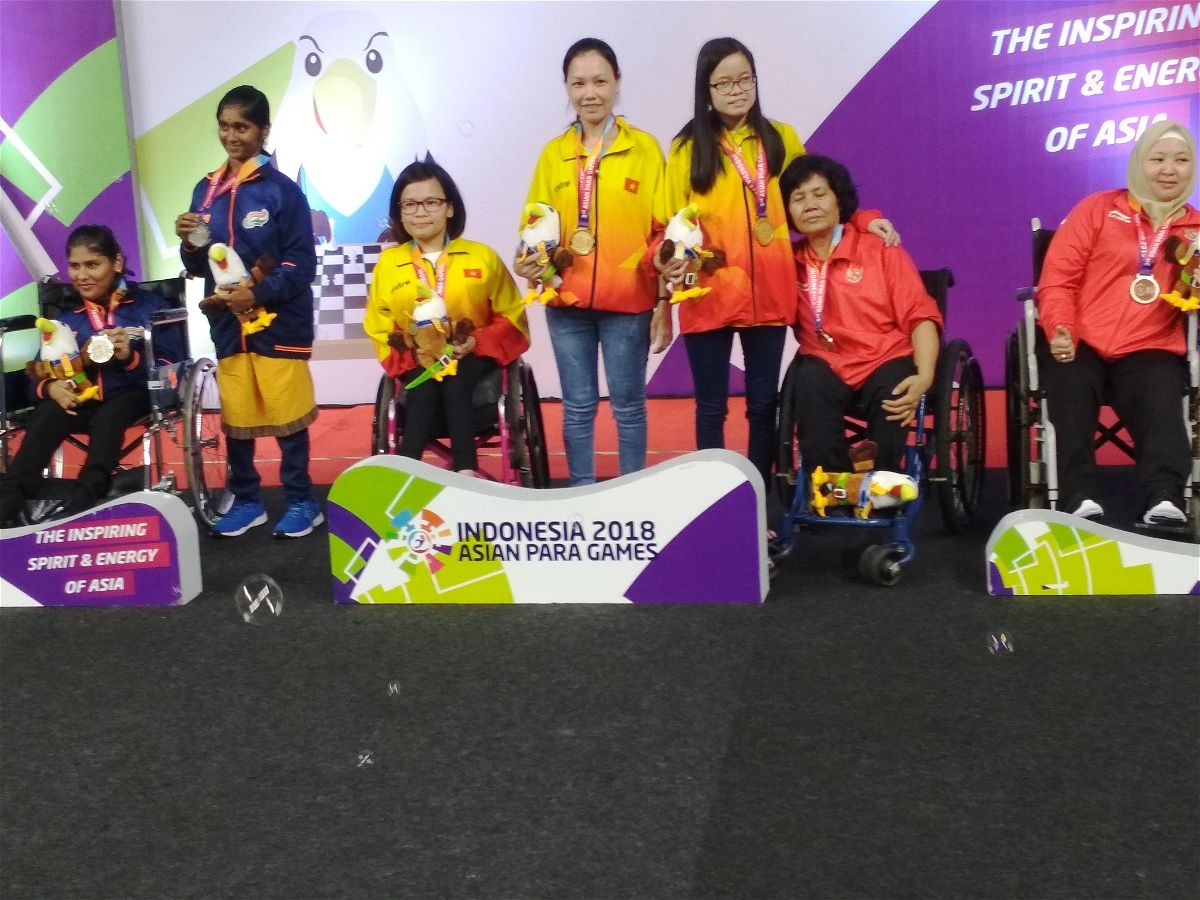 Jennitha and Raju Prema Kanishshri secured the silver medal in the team event, which was won by Vietnam Megha Chakraborty, Mrunali Prakash Pande and Tijan Punaram Gawar received one silver and one bronze medals in the team event for the Visually Impaired category for women

Severino Sander of Philippines won four gold medals, both the Standard and Rapid individual events of the Physically Impaired category and was also responsible for two gold medals of the team event. 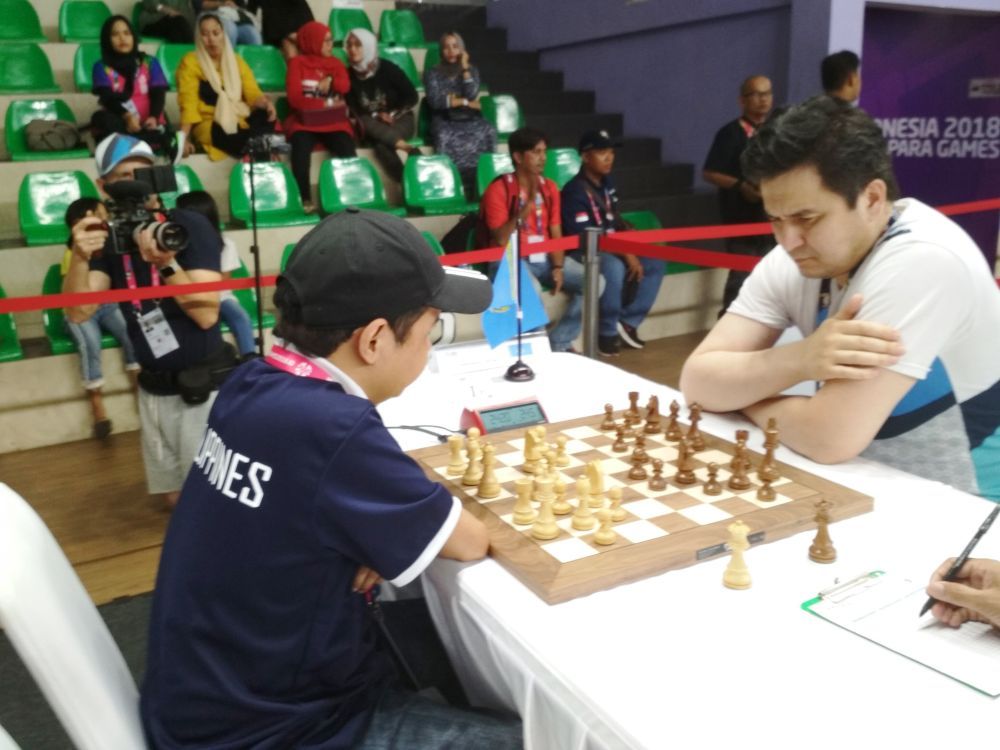 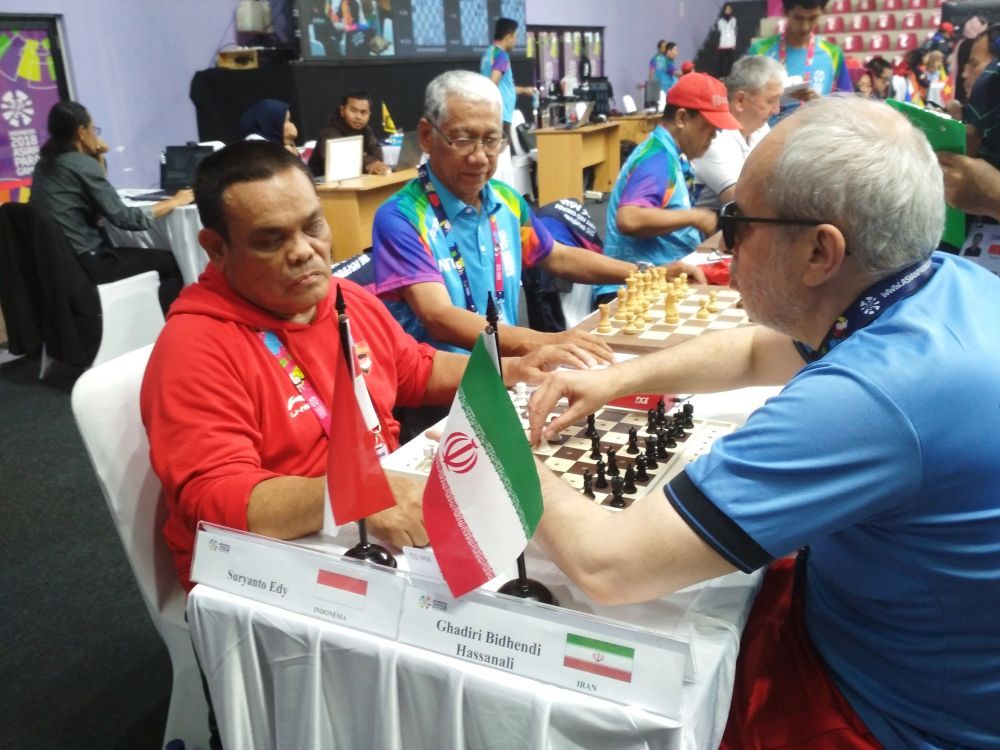 The tournament was well organised with good facilities to players. Each chess game in a round was supervised by a match arbiter, together with an assistant, to make the moves on the board and to maintain the scoresheet. There were more than 50 arbiters and 50 volunteers for 86 players, in addition to the plenty of volunteers, catering to the needs of the players with a smiling face. 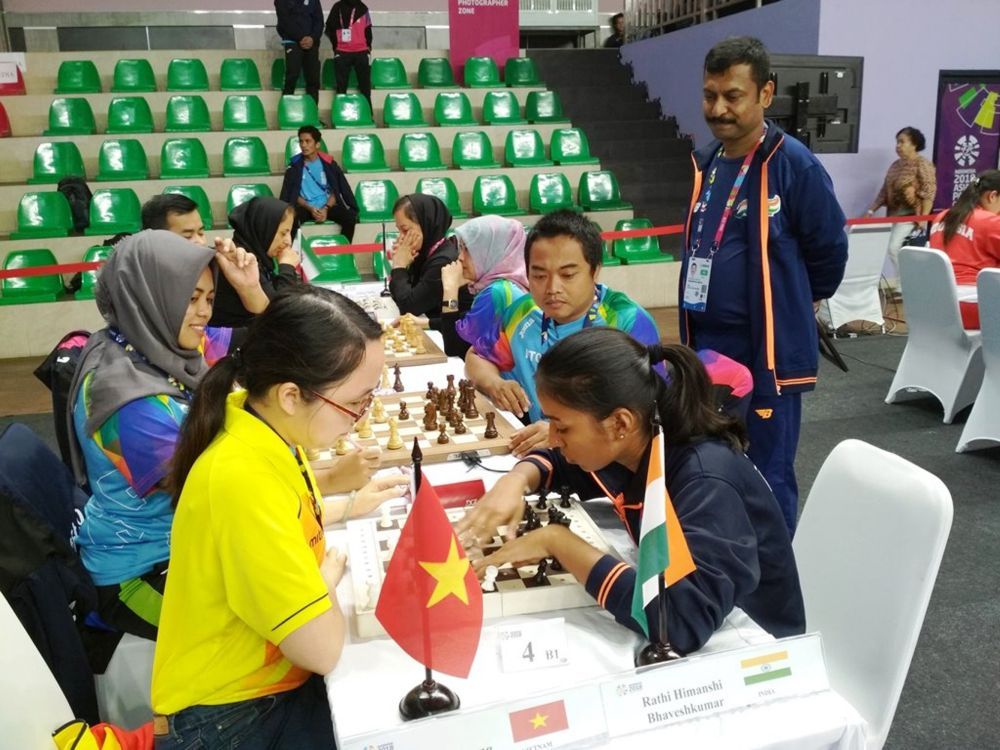 Each game exclusively had one match arbiter and one volunteer. Himanshi Rathi is watched by the coach and international arbiter Manjunatha 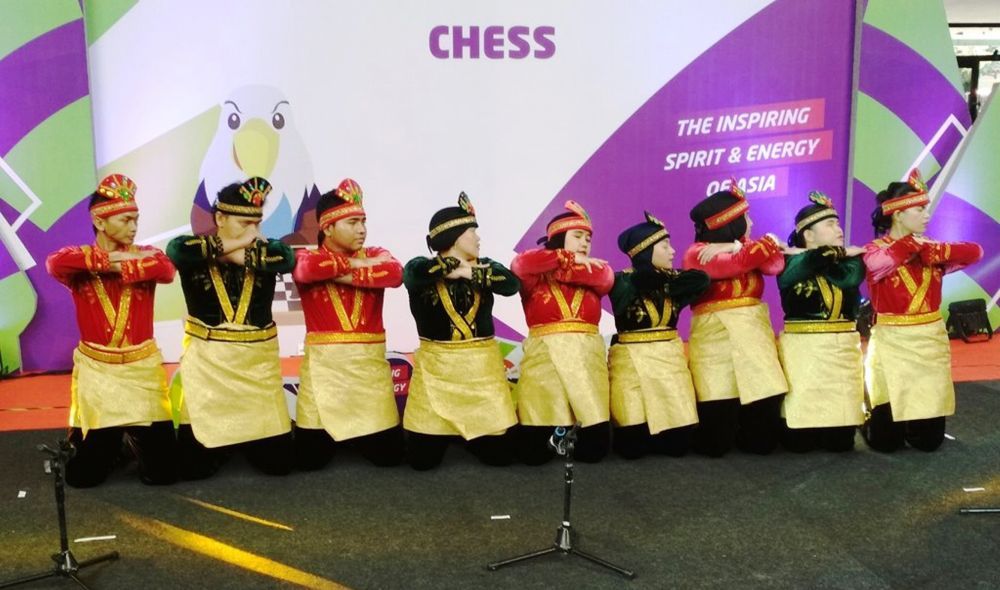 The players were entertained daily in between the games, mostly by blind artists 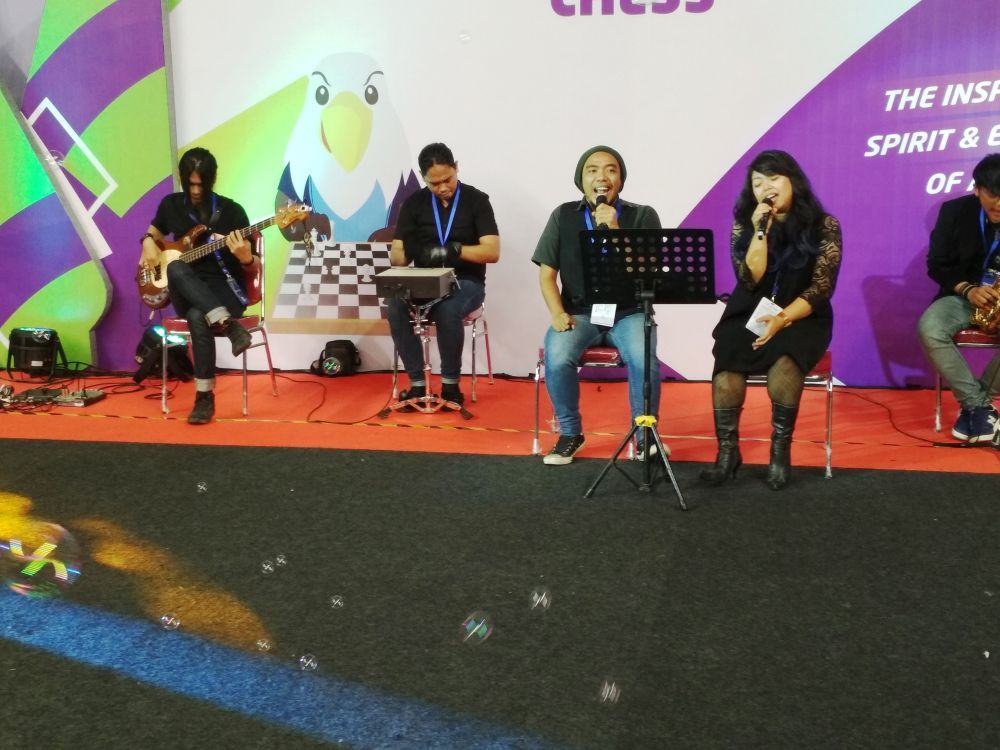 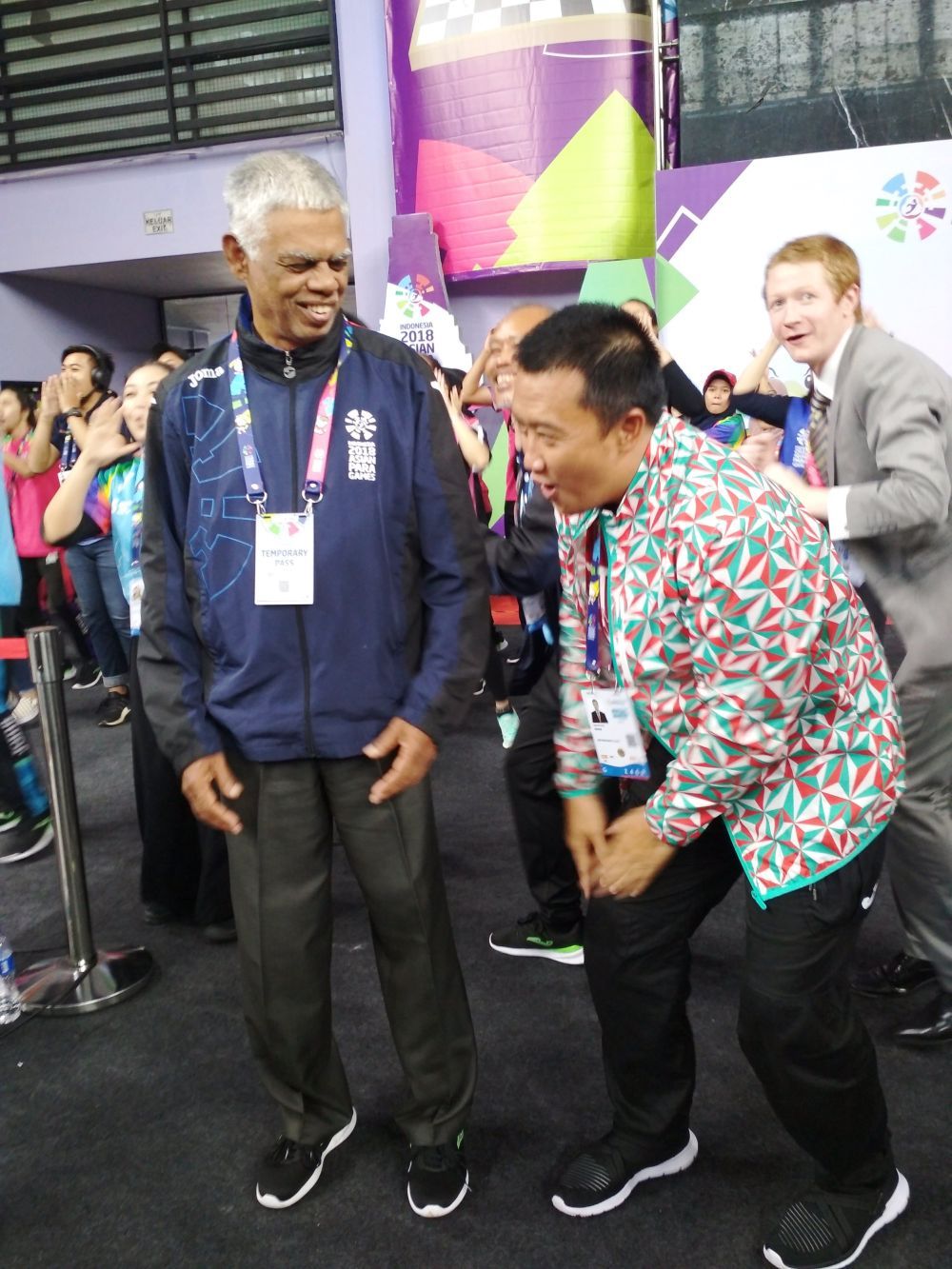 The Sports Minister of Indonesia was enthusiastic in joining the dance 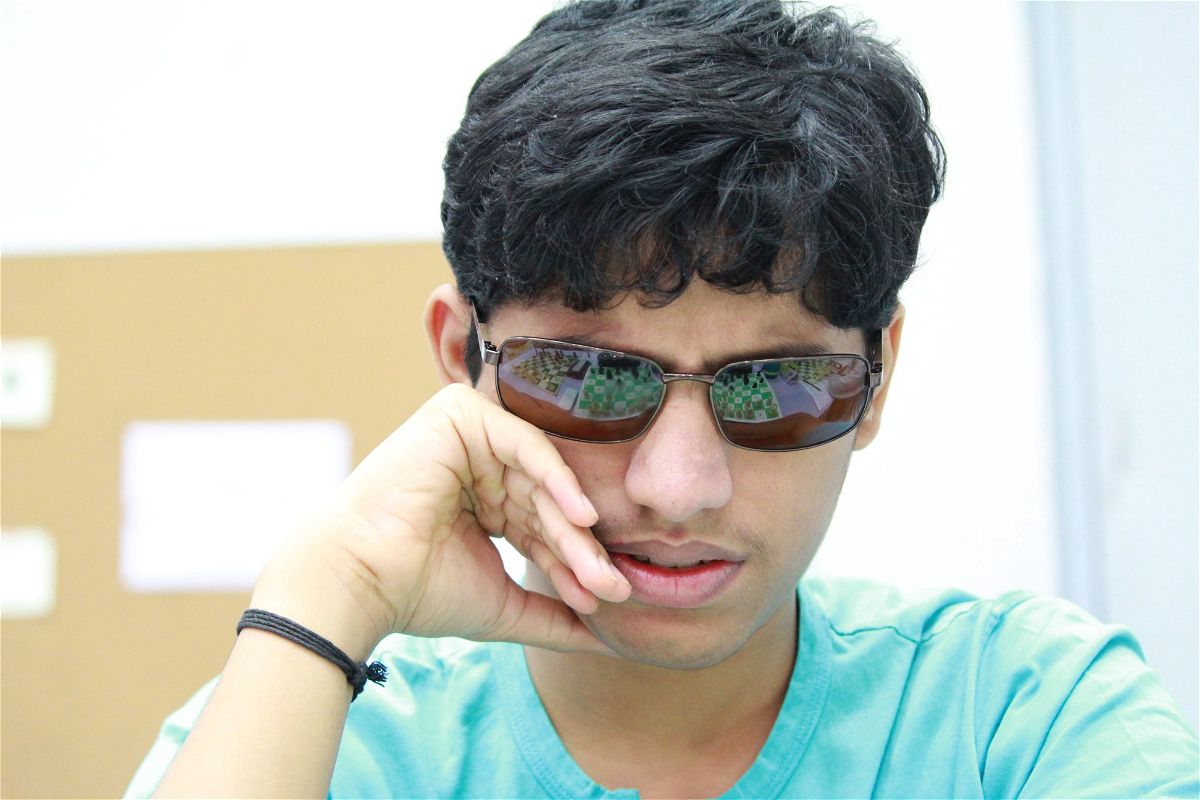 A special mention must be made about Mumbai youngster Aryan Joshi

Aryan Joshi was going to play in the B2+B3 category for India. Soundarya Kumar Pradhan who was going to play in B1 (100% visually challenged) category had issues with his test. Instead of allowing him to play in the B1 category they put Soundarya in B2+B3 category. This meant that Aryan who had travelled all the way from India to Indonesia didn't get to play even a single game. But the youngster is extremely positive and he made sure that his presence was put to good use. Aryan helped his team mates in preparation and in every way he could so that they would win a medal. At the end of the day the boy didn't get to play a game, he didn't win a medal, he didn't get to meet Prime Minister Narendra Modi, but he was a team player and he can be satisfied with the fact that he helped his team mates win a medal for India.

OakTree Sports which produces the famous "Breakfast with Champions" show, started a new series on "India Plays". The first episode of this show was on Aryan Joshi.

The Prime Minister of India showed a great gesture by winning all the medal winners of India at the Asian Para Games 2018. This meant that all our chess heroes also got a chance to interact with Narendra Modi. Here are some of the pictures that were posted on Narendra Modi's Official Twitter Page: 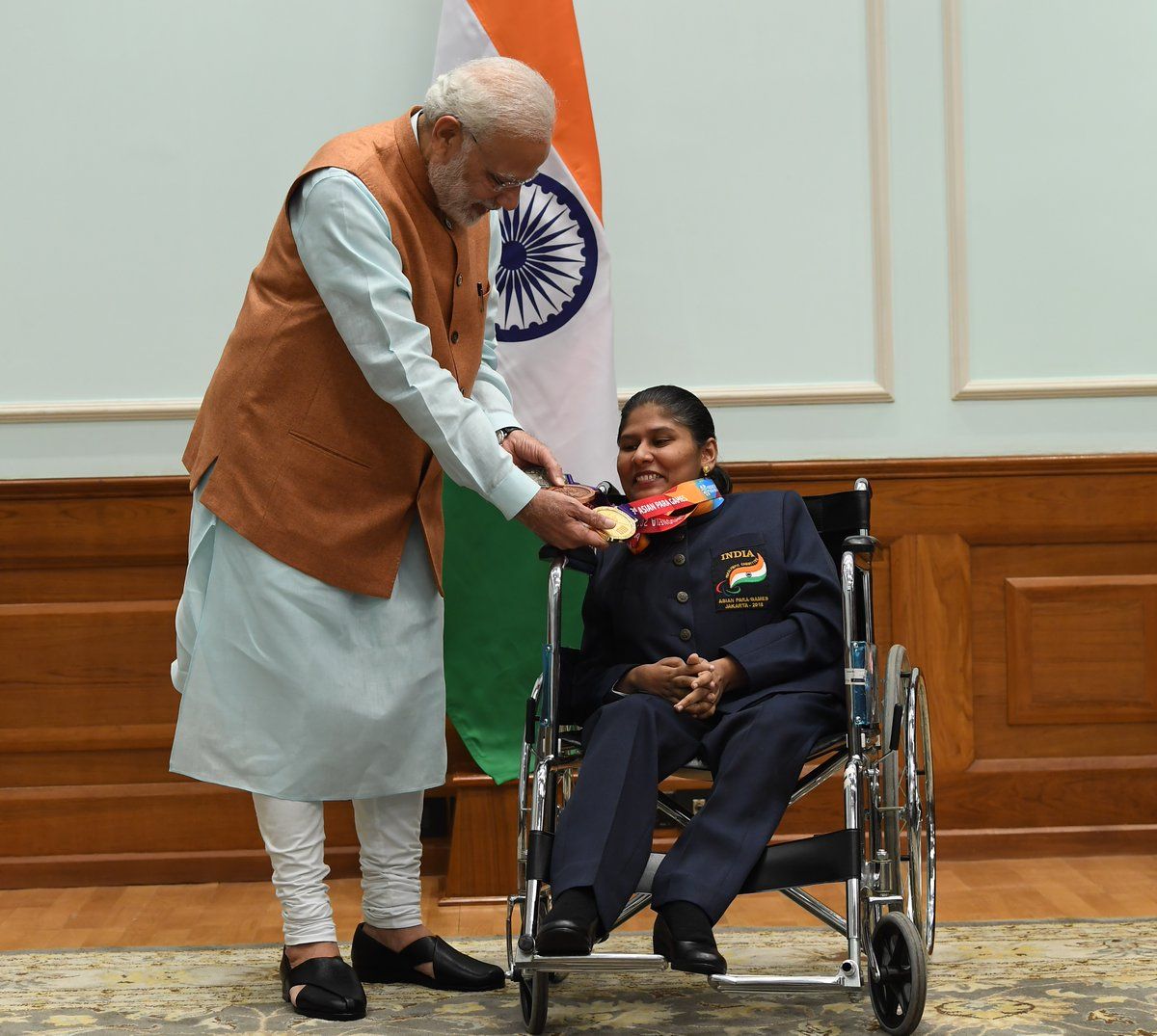 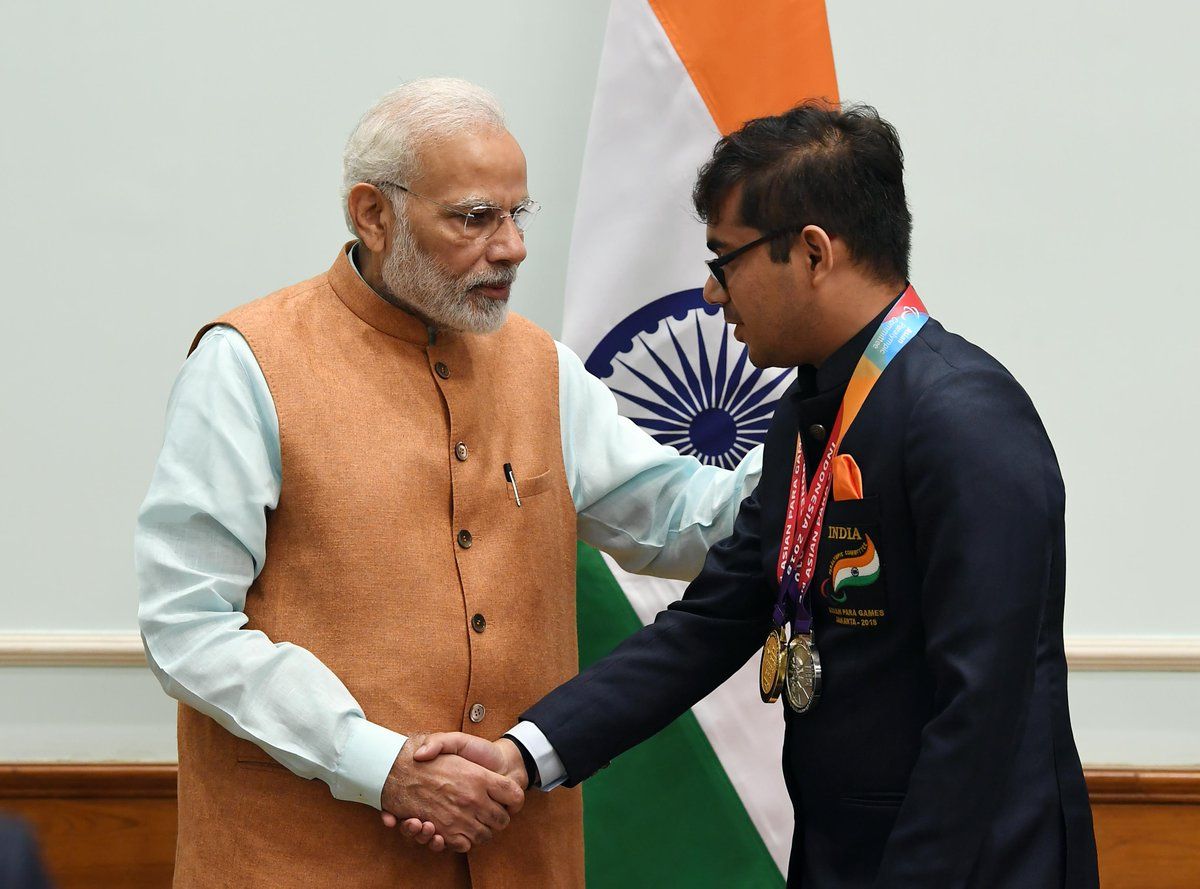 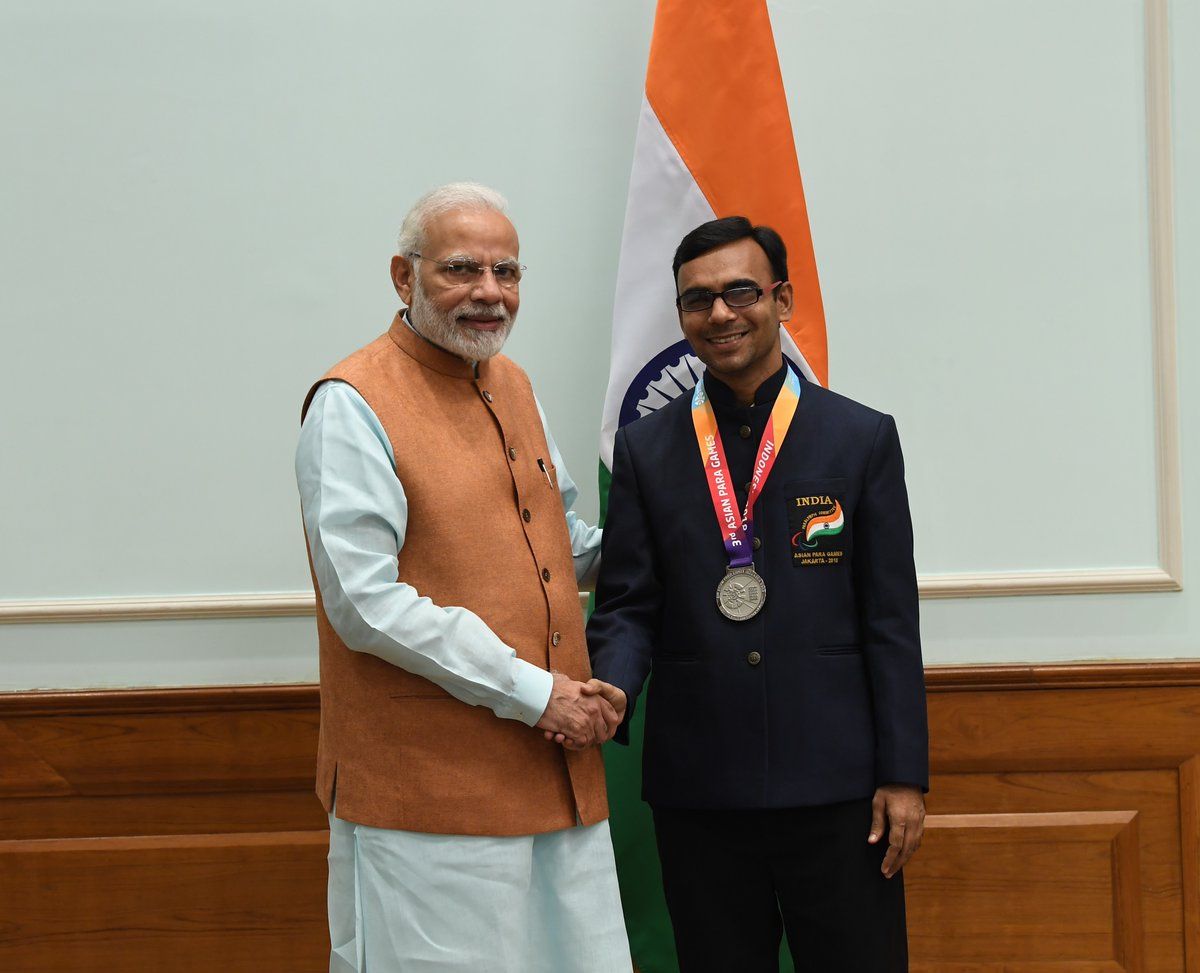 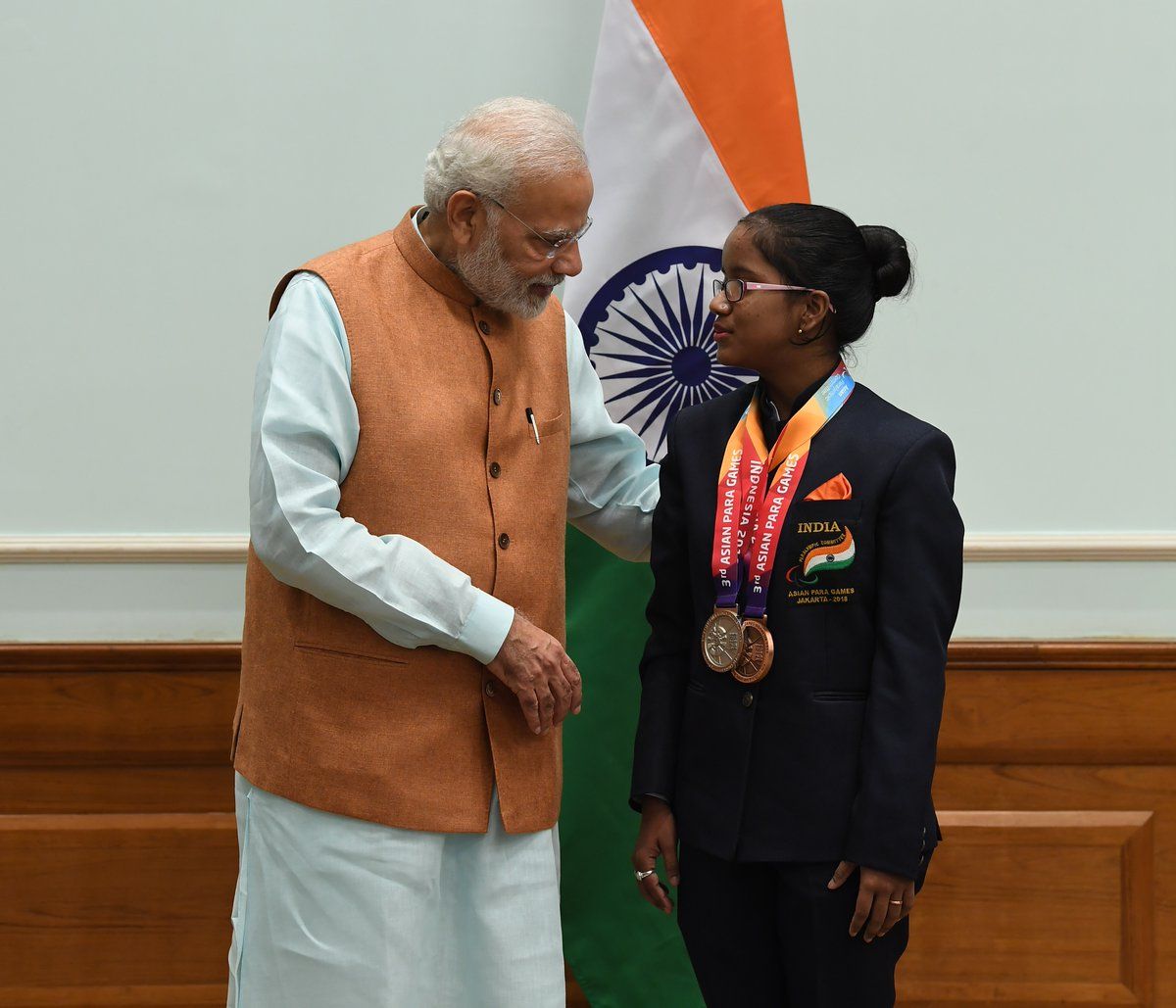 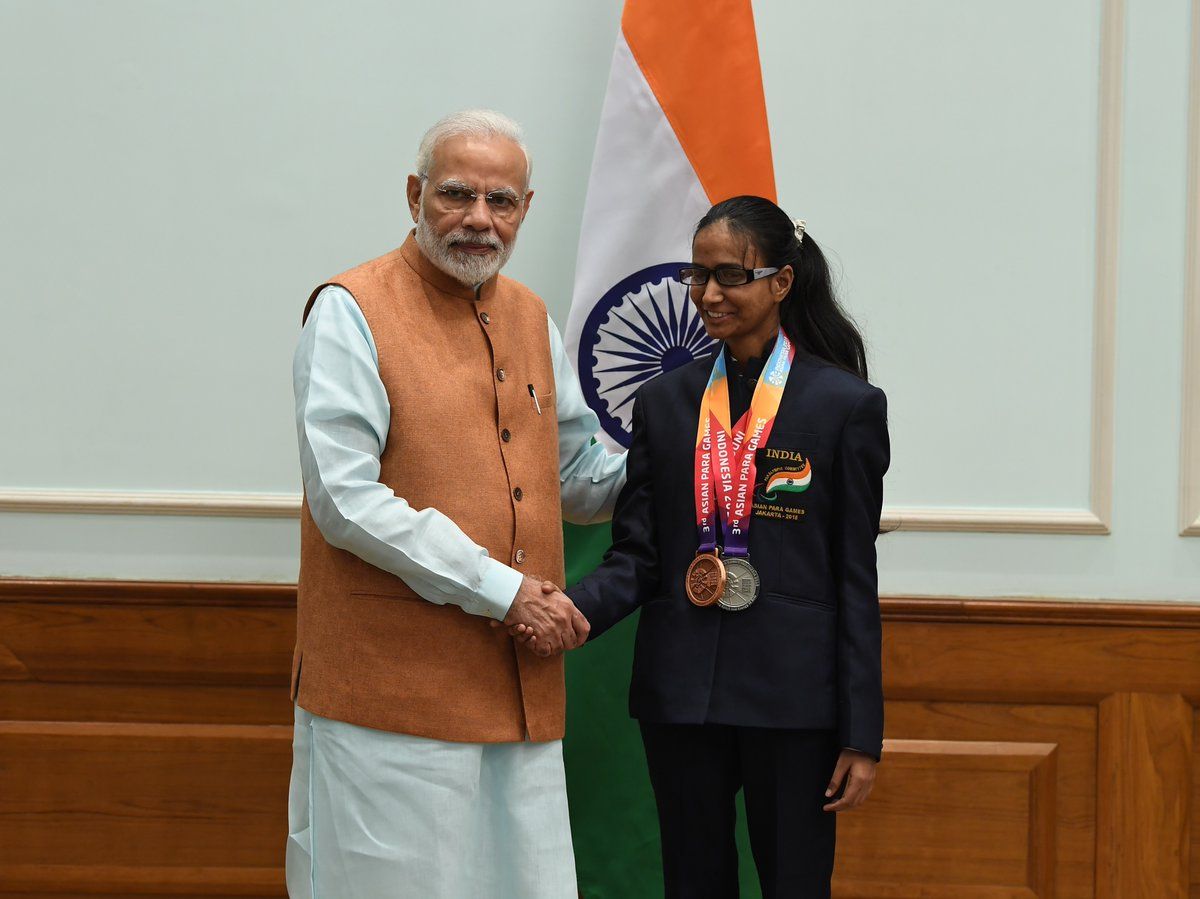 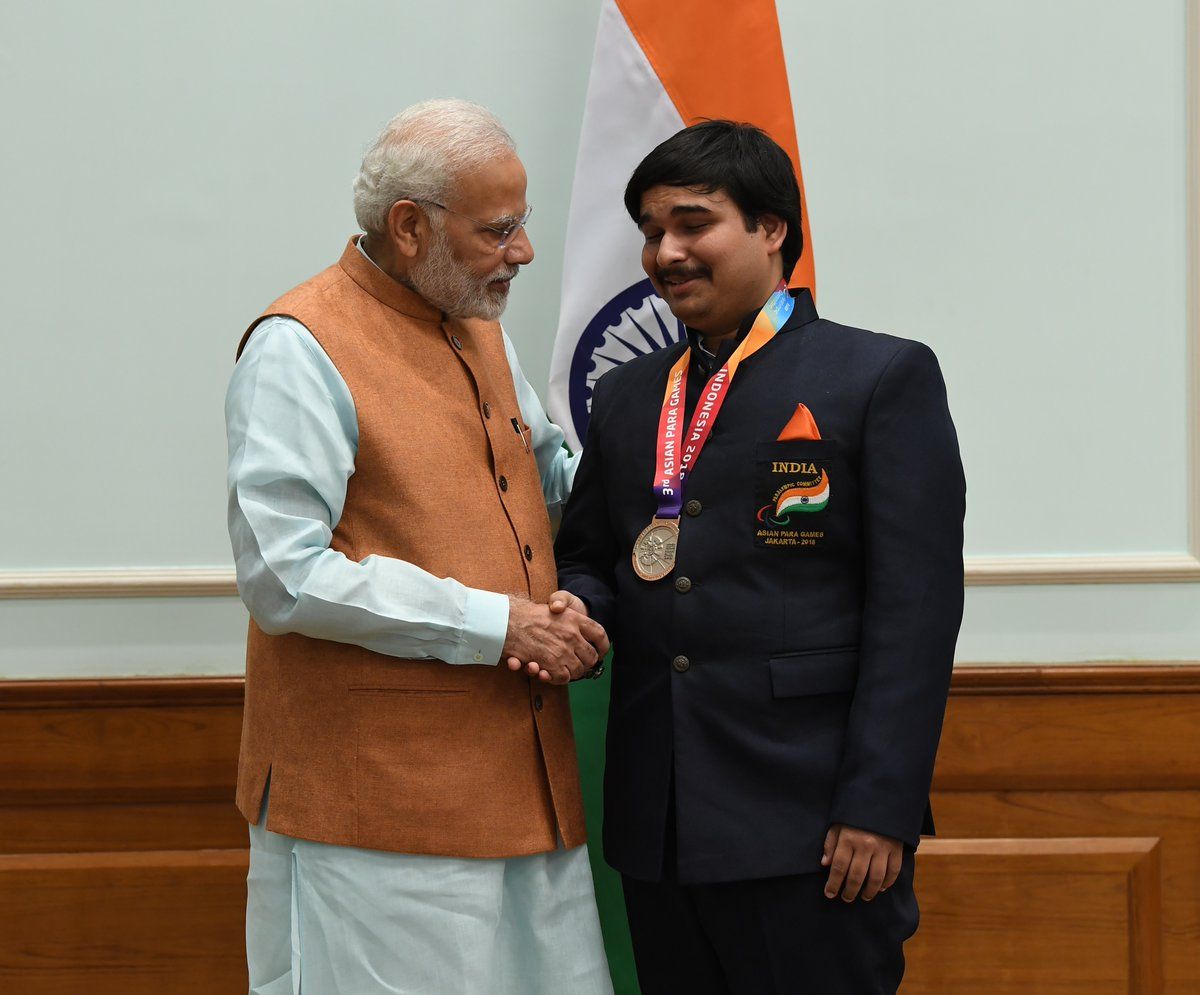 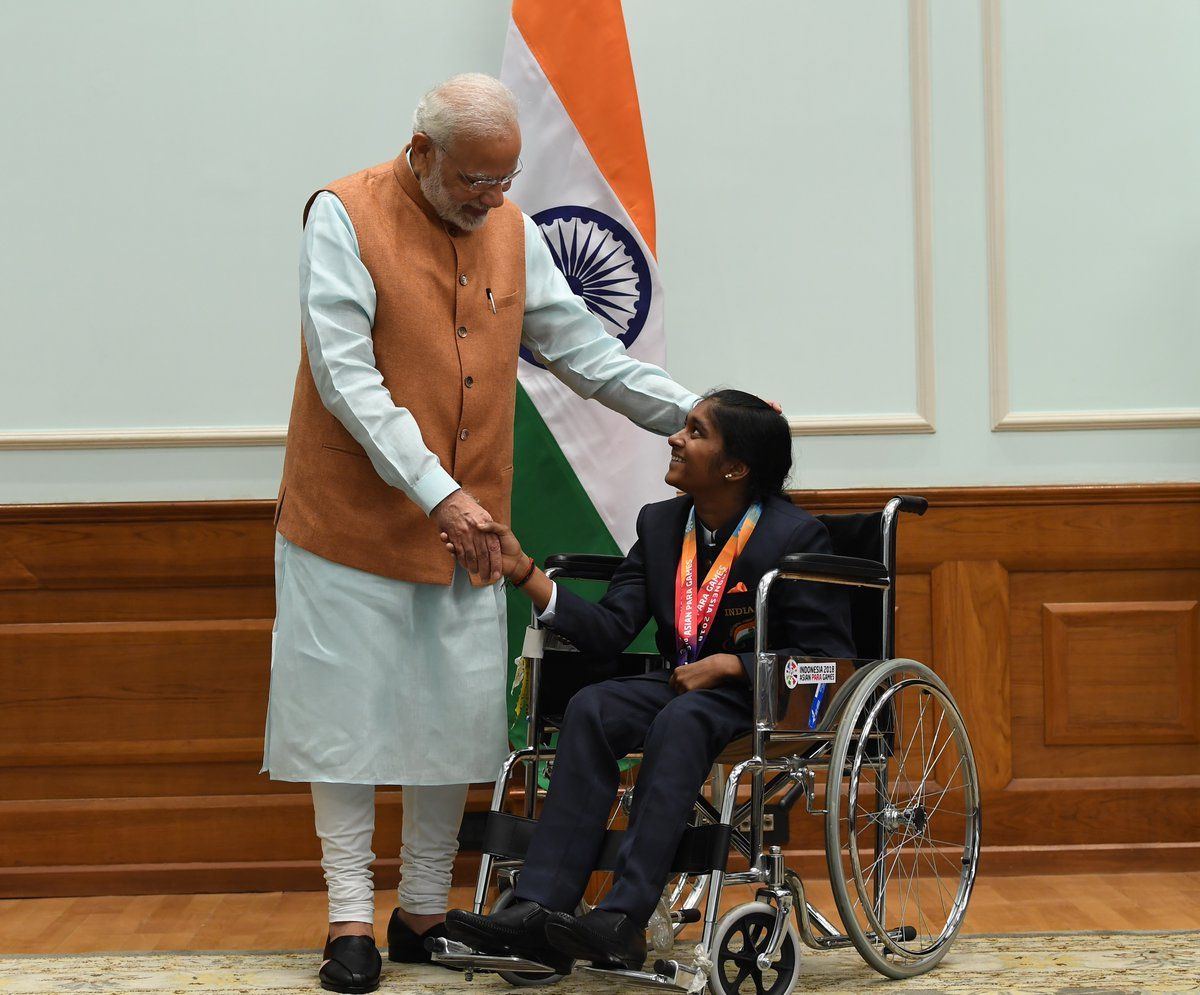 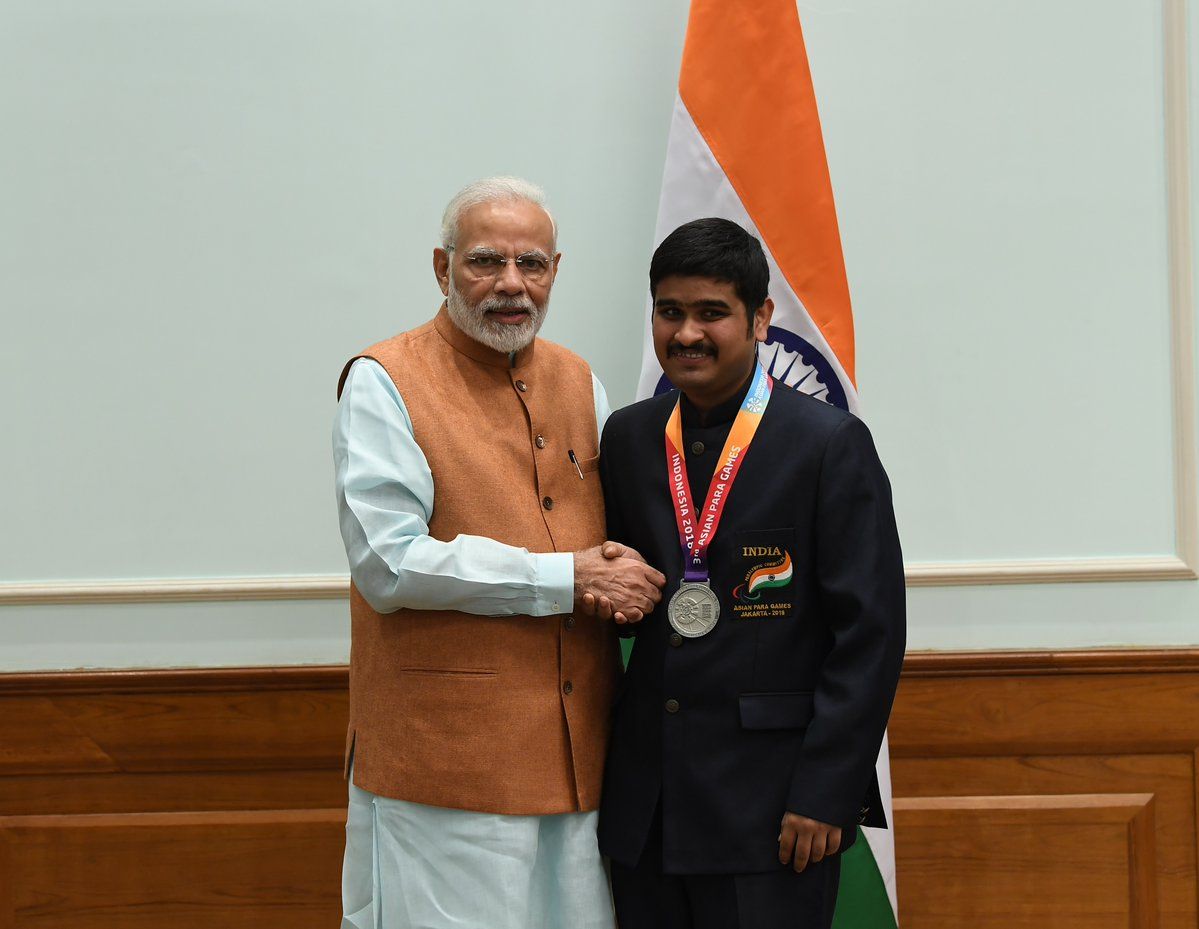 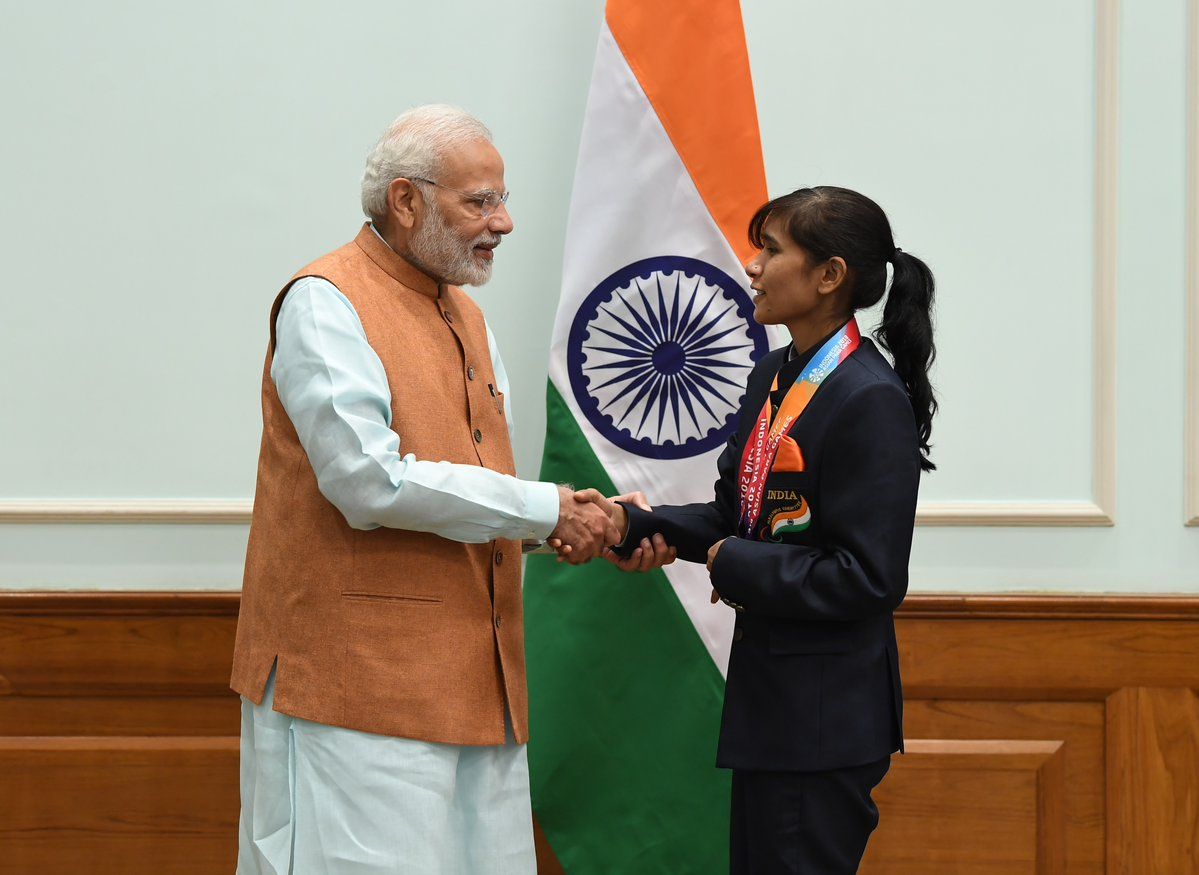 Interviews with the golden duo of Indian chess:

If you were to ask us, who is one of the most inspirational figures in Indian chess, we would surely point you towards Jenitha Anto. She was struck with polio when she was very young and has been wheelchair bound ever since. But this has not come in between her dreams to be a world class chess player. Jenitha worked  hard in chess and became the five-time IPCA Women's World Champion.  At the recently conducted Asian Paragames she once again made a huge mark by winning four medals - one gold, two silver and one bronze! In all the sports combined India won 72 medals, out of which four were contributed by Jenitha. IM Sagar Shah spoke to Jennitha over the phone and did an interview with her after this stupendous achievement. Jenitha also shows her favourite game form the tournament.

Kishan Gangolli is one of India's top visually challenged players. Recently he won an individual gold and a team silver at the Asian Paragames 2018. It was a big moment for the blind chess community because this was the first time that chess was included in the Asian Paragames and medals won by our players would add up to India's medal tally. Kishan's efforts not only helped him stand on the podium and listen to the sweet feeling of the Indian national anthem, but also gave him an opportunity to meet the Prime Minister of India Narendra Modi. Here's an interview with the champion on how the Asian Paragames were, which was his favourite game (don't miss the analysis) and also how his meeting with the PM was!