The fourth round of the FIDE Candidates 2016 was truly a spectacle. Nailbiting action was witnessed in almost all the games of the round. To start with, Vladimir Kramnik lost his lead to Fabiano Caruana after losing to the latter in a thrilling encounter that, quite paradoxically, began with a tepid looking Petroff. Alexander Grischuk sacrificed a piece very early in the game but missed the critical continuation and had to settle for a draw in the end. In another exciting game, Levon Aronian scored his first win of the tournament while Wesley So kept up his safety first approach and held Mamedyarov to a draw comfortably. Round 4 report.

Round 04: When the "Cool House" turned hot

After the rest day, the FIDE Candidates witnessed yet another spectacular round. Vladimir Kramnik, who had been leading the tournament so far, was overtaken by Fabiano Caruana who defeated the former world champion in a dramatic encounter. With this win, Caruana has taken sole lead in the tournament. In another thriller of a game, Alexander Grischuk chose to go as sharp as he could, sacrificing a piece quite early. But later in the game, he missed the decisive blow and had to struggle to split the point. Levon Aronian scored his first win of the tournament after enjoying some casual bouts of Scrabble with his family on the rest day. The only quick draw of the round was seen in the game between Wesley So and Shakhriyar Mamedyarov.

So far, Vladimir Kramnik had shown some excellent preparation and enterprising play winning two out of his first three games. In round four, his opponent, Fabiano Caruana, opened with the bland-ish Petroff Defence. Kramnik’s response wasn’t particularly inspiring either; he went for a queen exchange quite early in the game and it seemed as though the game was headed towards an uneventful end. 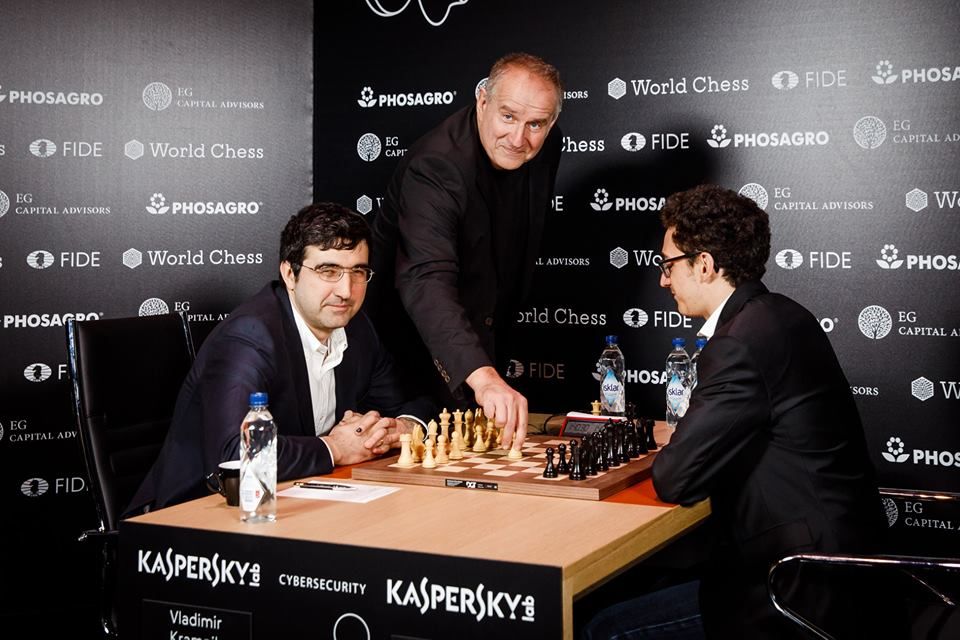 It was a tepid Petroff, but Kramnik knows how to pump life into any position way too well! | Photo: World Chess

But Kramnik had other plans. He began stirring things up in the middle game in an attempt to churn out some chances. However, in the opinion of the silicon monsters, this was much too ambitious. The position was still quite complicated with both sides racing pawns on different flanks of the board. Caruana failed to find the best continuation in the heat of the battle and from worse for white, the evaluation of the position changed to chances for both sides. And just when Kramnik seemed to have got the ball rolling, time trouble kicked in and Kramnik blundered. This time, the damage was beyond repair; he resigned after 66 moves of play.

In round three, Aronian had fallen prey to some fantastic preparation by Kramnik in the Berlin. This time, however, it was Aronian who rolled out an opening novelty that caught his opponent off guard. Out of the opening, Karjakin emerged a pawn down and was unable to find the right way to hold to a draw. Queens were traded soon afterwards and in the ensuing endgame, Aronian found amazing activity for his pieces. 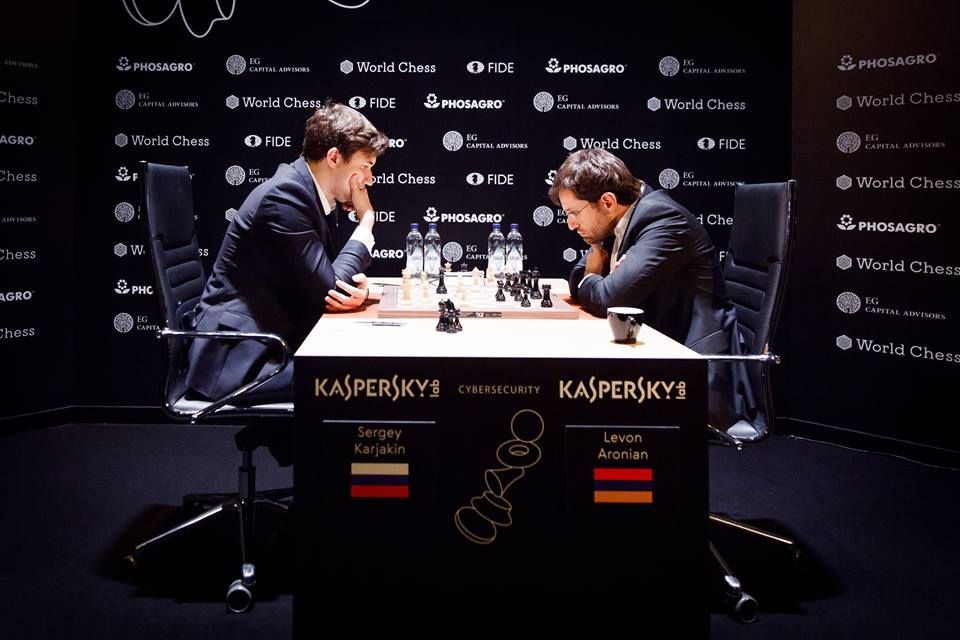 Aronian scored his first win of the event in round 4 | Photo: World Chess

Trading rooks, and a pair of knights, Aronian improved his material lead from one pawn to three pawns within a span of ten moves. These three pawns were a few too many for Karjakin to keep in check. He decided to throw in the towel on move 68.

The game between Alexander Grischuk and Ding Liren might have ended in a draw but it was no less entertaining than the decisive games. From the white side of a Semi-Slav, Grischuk came up with a spectacular piece sacrifice on his twelfth move to catch the king in the centre. Ding Liren defended well for quite a while until he blundered on the 22nd move to give his opponent the decisive advantage. 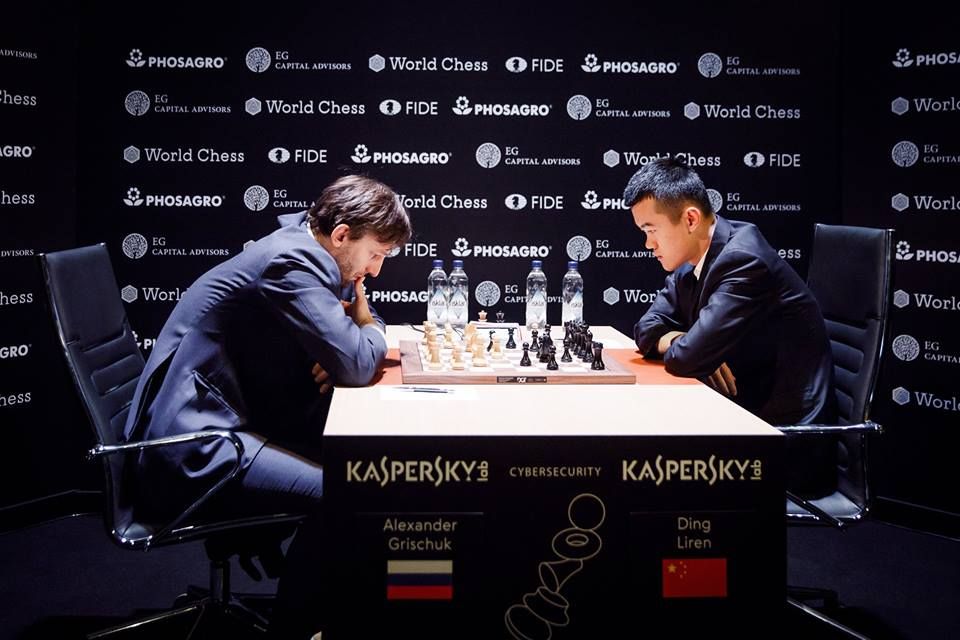 Who would complain if a draw was as spectacular as this one! | Photo: World Chess

But this wasn’t the end; Grischuk returned the favour on his immediate next move! Had Grischuk found 22.Bh4+, the outcome of the game would have been completely different. However, that was not to be. On his 39th turn, Ding gave up an exchange but ensured that his far advanced passers on the queen side gave him enough counter play and the game ended in a draw after 51 moves of play.

Ding and Sasha talk about their game | World Chess YouTube

Amid all of the swashbuckling games of the round, Wesley So’s encounter against Shakhriyar Mamedyarov seemed way too dull. So had the black pieces in the game and chose the Classical Variation of the Nimzo Indian Defence to kick off with. Sacrificing a pawn out of the opening, So got decent compensation for his pawn in terms of piece activity. 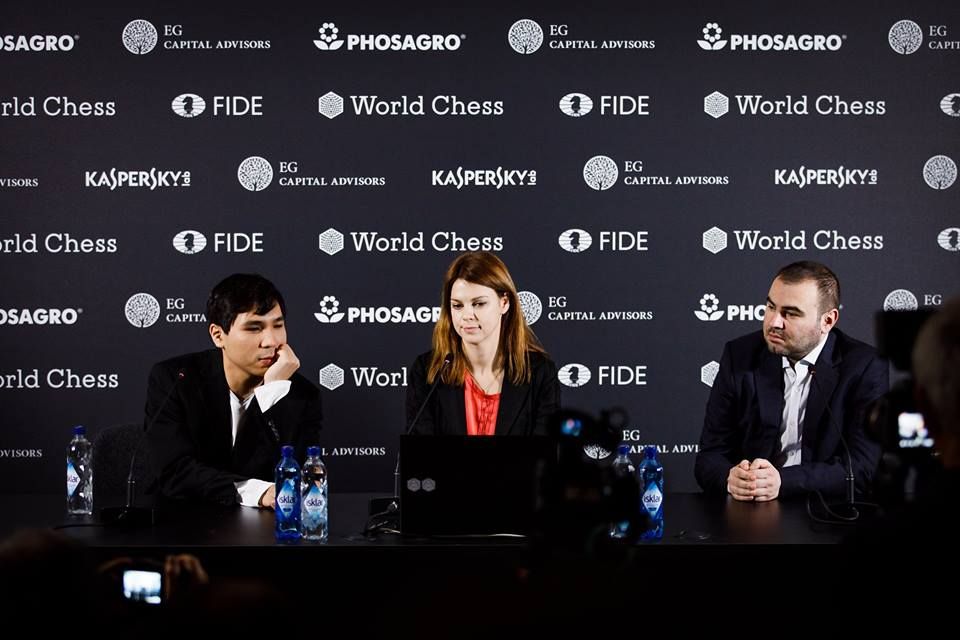 So continued his safety-first approach going into round 4 | Photo: World Chess

As the game progressed, not only was So able to win his pawn back but he also succeeded in exchanging pieces from time to time. After a queen trade on the 27th move, neither player had any advantage whatsoever. Within the next four moves, peace was signed by repeating moves.