The third round of the FIDE Candidates witnessed the first big brilliancy of the year in the game between Vladimir Kramnik and Levon Aronian. Surprisingly, Levon was caught off guard in the Berlin, an opening which has been pretty much in vogue at the top level in the last few years. All the other games of the round were drawn. However, special mention needs to be given to the highly complex and entertaining game played between Fabiano Caruana and Shakhriyar Mamedyarov. Round three also saw Wesley So open his score. After losing in the first two rounds, So finally added half a point to his tally after his draw against Ding Liren. An illustrated report with games and analysis.

Just like the previous round, day three of the Candidates tournament also saw three draws and a decisive game. This time, it was the oldest player in the fray, GM Vladimir Kramnik, who scored a win against Levon Aronian. This was Kramnik's second win of the tournament. Going into the first rest day of the event, Big Vlad has taken sole lead in the tournament where nothing but a first-place finish counts. 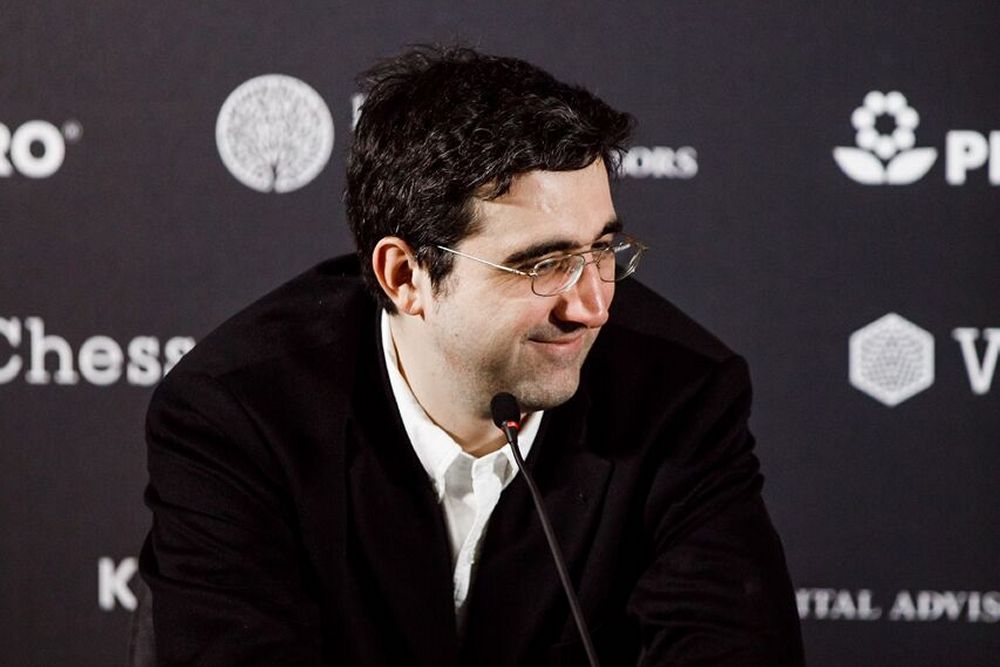 With the black pieces, Kramnik essayed his pet Berlin against...| Photo: World Chess 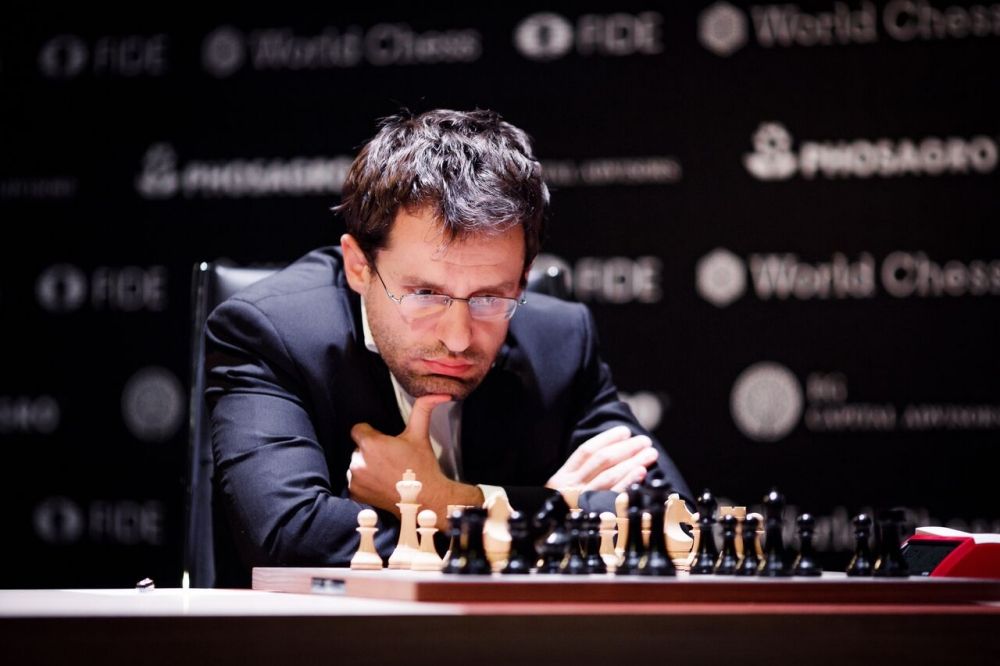 When a Berlin arose over the board, nobody must have imagined that the game would be a 27-move demolition but as early as on his seventh turn, Kramnik uncorked a novelty that made Aronian fall off his chair. 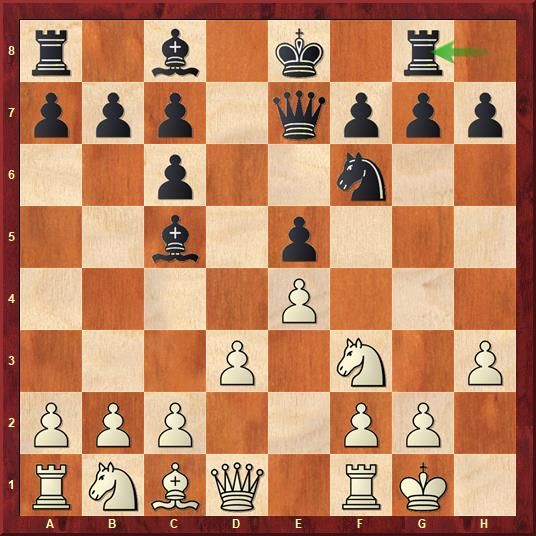 Actually, the idea of the move is pretty simple: Black wants to exploit the weakness white has created with his little pawn advance 7.h3. In playing 7.Rg8, black intends to expand on the kingside with g5-g4 and open a file around the white king to wreak havoc. Aronian was well aware of what was coming but as it turned out, he wasn't quite sure how he could stop it. Within the next five moves almost all of Black's pieces were in the attack while White lagged behind drastically in this regard.

On his 24th turn, Kramnik cherried this cracker of a game with a pretty bishop sacrifice. Aronian did not accept the sac but was unable to limp on for more than three moves after this.

Another sharp position was seen in the game between Fabiano Caruana and Shakhriyar Mamedyarov. Mamedyarov, who had the black pieces, countered his opponent's 1.e4 with the sharp Sicilian Najdorf. Caruana, too, was in the mood to play it sharp and went for what is perhaps the sharpest variation of the opening: The English Attack! 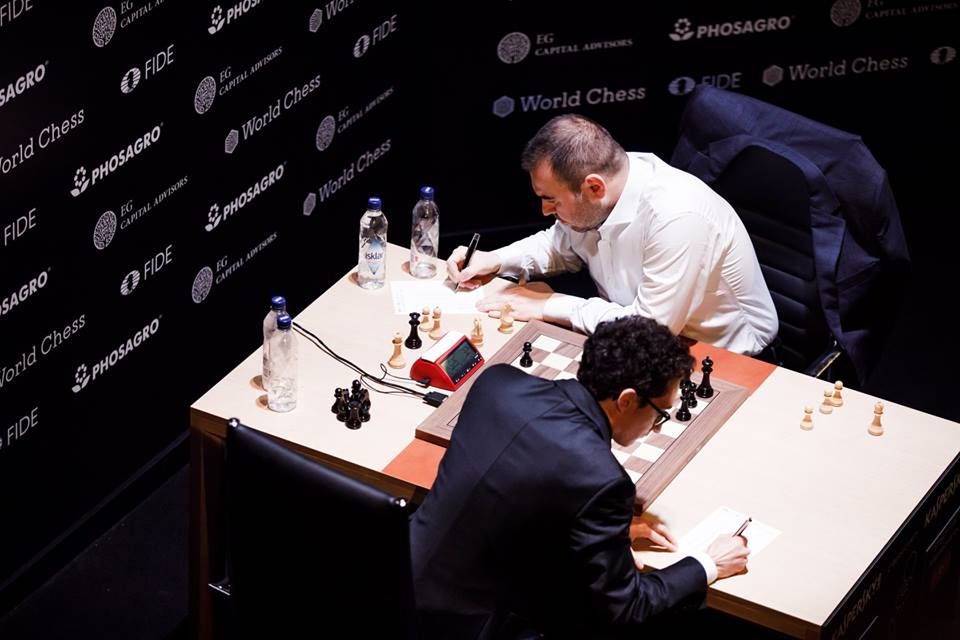 Caruana vs Mamedyarov was another entertaining encounter | Photo: World Chess

Both players went energetically into some deep tactical complications that arose after a long theoretical line of the English Attack. Out of the opening, Caruana seemed to have the edge. By the 27th move, he was even able to force Mamedyarov to give up an exchange.As compensation, Mamedyarov did get two strong passed pawns eventually and then it was Caruana who was under pressure.

After a few endgame skirmishes, queens were exchanged and the players reached a rook vs bishop endgame where queens were traded by the 47th move and within the next two moves, a draw was agreed. In the post-game press conference, Caruana said that he felt his position was bad for "pretty much the entire game" and that it's a miracle that white was surviving in that position.

Alexander Grischuk was so impressed by these two games that he felt he shouldn't even speak about his own game. "Today there was one of the best games I have ever seen -- Aronian-Kramnik -- now a very exciting game Caruana-Mamedyarov. I don't think we should even speak about our game," Grischuk said at the press conference. 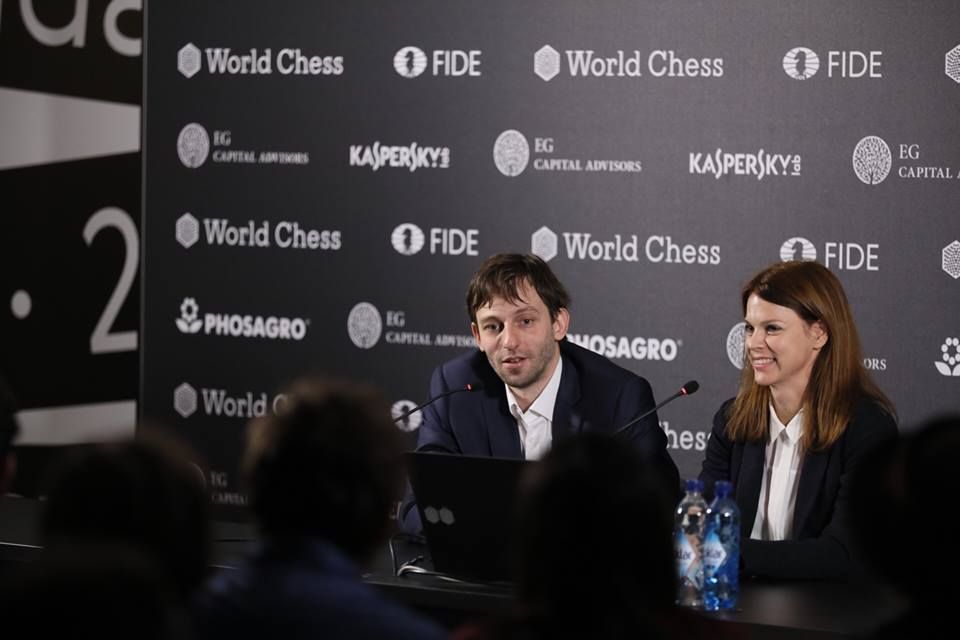 Grischuk was so impressed by Kramnik's game that he felt he shouldn't even talk about his | Photo: World Chess

Grischuk's opponent, Karjakin later added that he went into a forcing line on his 16th turn since he did not like his position very much and further said that it could have been dangerous if he had played otherwise. "I got the two bishops but his position was extremely solid," Karjakin said.

Wesley So, who had lost both of his previous rounds at the Candidates, finally got off the mark with a draw against Ding Liren. So had the white pieces in the game and went for the Ruy Lopez. Ding responded with the Marshall Gambit, and Wesley happily went for the main line as it mostly leads to a draw. 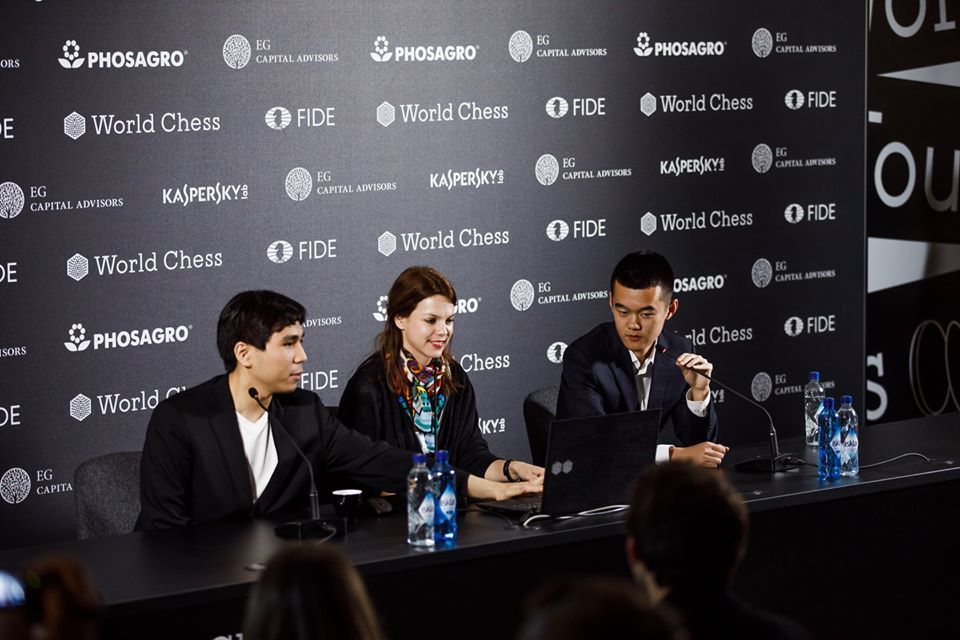 Wesley So finally opened his account with a draw against Ding Liren in round three | Photo: World Chess

After the game, Wesley explained that he just had to take what he can after having lost back to back games in the last two rounds. "After my first two losses, it's quite difficult to have the mindset for an all-out game; I have to take what I can. I am prepared to be more ambitious, but as is clear from my first two games, having great ambitions can also backfire," he said.