The Master Tournament (MTO) of 54th Biel International Chess Festival 2021 started on Monday 26th July. A total of 73 players are taking part in the Master Tournament (MTO). The biggest contingent in this event is India, which consists of 17 players, followed by Switzerland having eleven players. 27 GMs, 13 IMs, 4 WGMs and 4 WIMs are taking part from 18 countries across the world. All seeded Indian players started the event with a victory. Total prize fund for the MTO is 39000 CHF (approx. Rs 31.6 lacs) with the first prize being 6000 CHF (approx. Rs.4.87 lacs). The tournament will witness a lot of interesting clashes between the Indian players starting from Round 2 which starts at 5:30 p.m. IST today. GMT Classical Round 1 also takes place at the same time. Photo: Niklesh Jain 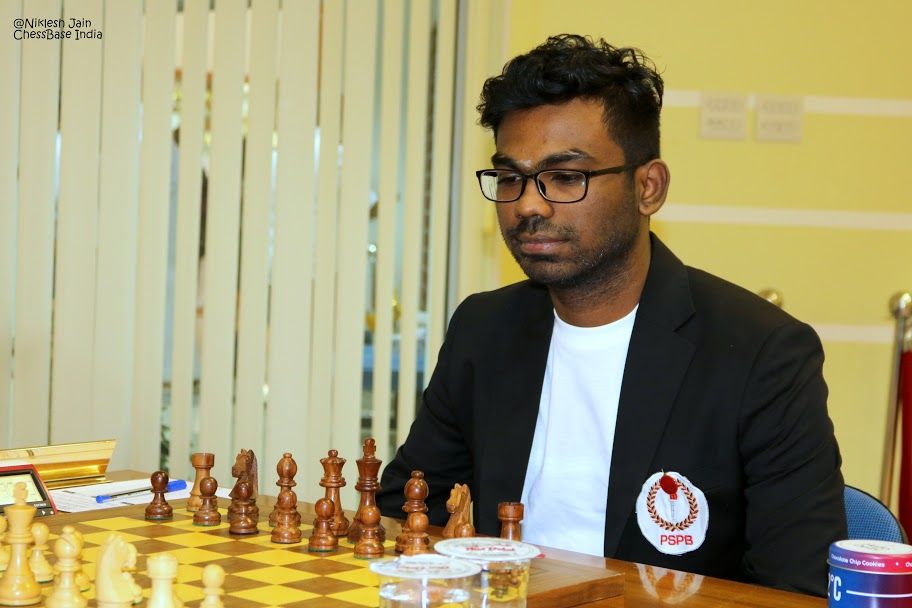 Sethuraman is the highest rated Indian in the field | Photo: Niklesh Jain

IM Sai Agni Jeevitesh had a good opportunity to squeeze a draw in the rook and many pawns endgame against GM Sethuraman. 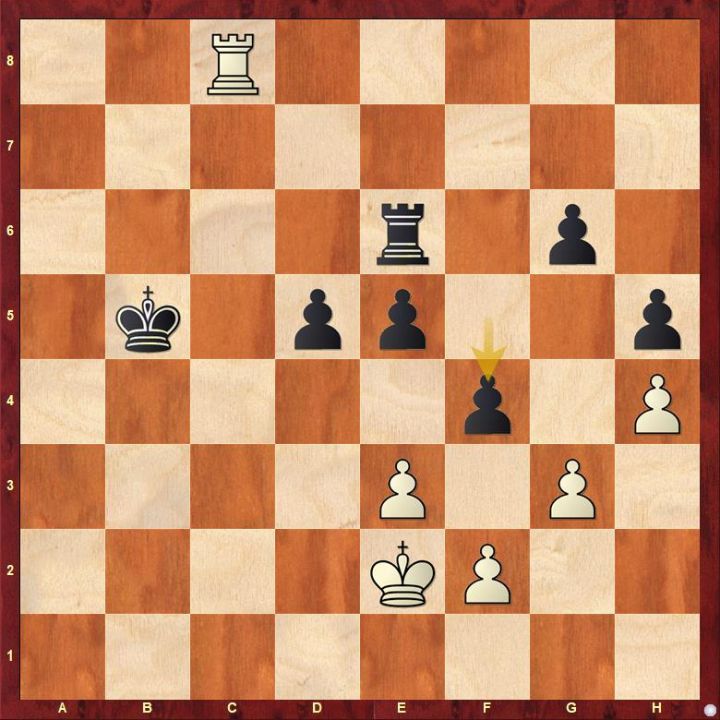 There were two ways for White to go for a draw here. 48.e4 was an interesting choice. The other one was 48.gxf4. The text 48.Kd3 created a window of opportunity for Black to push for a win. 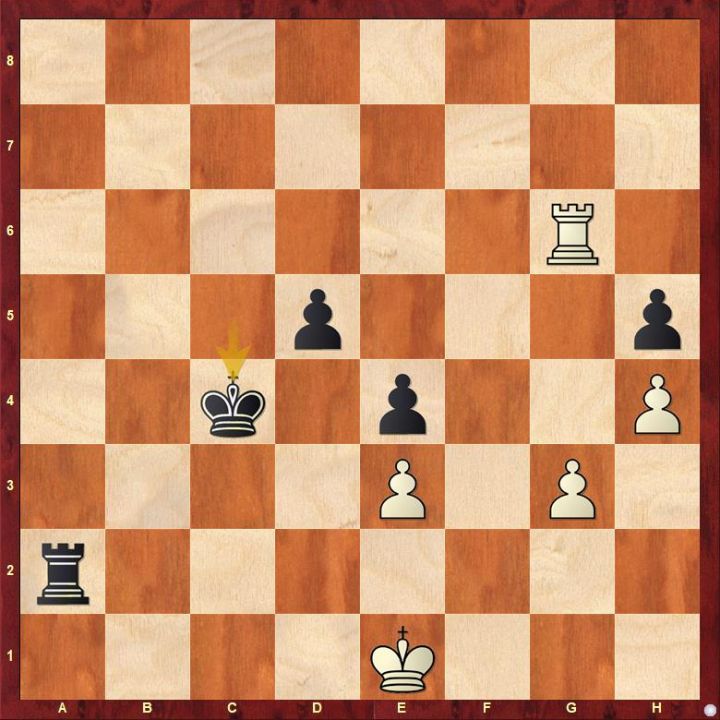 This is slightly a tougher defense for White, but it can still be saved. Find out how. 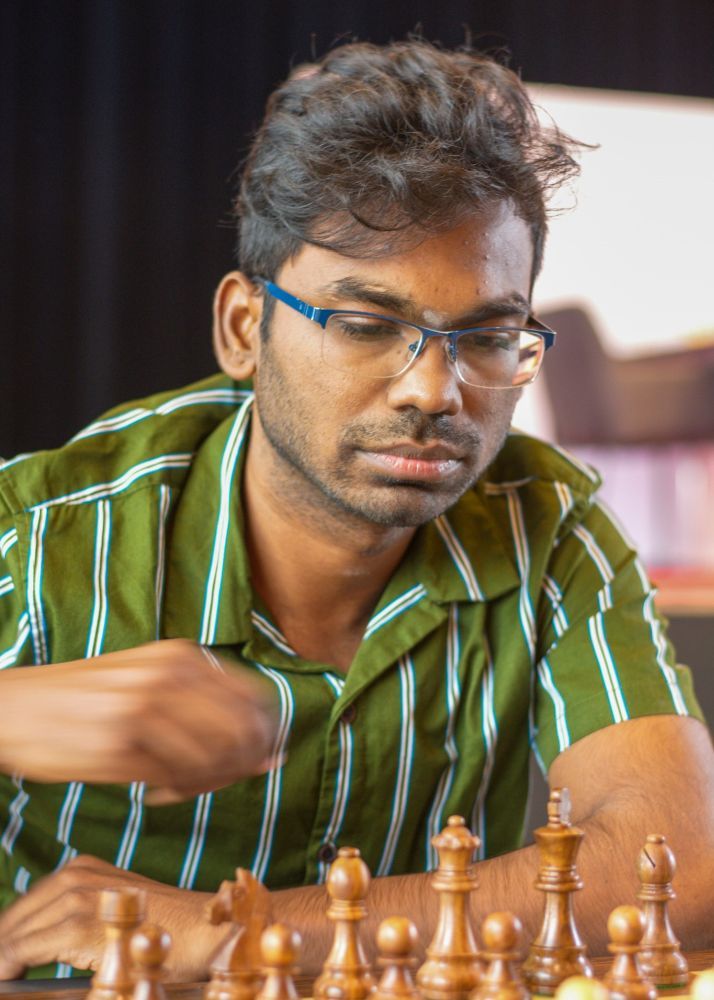 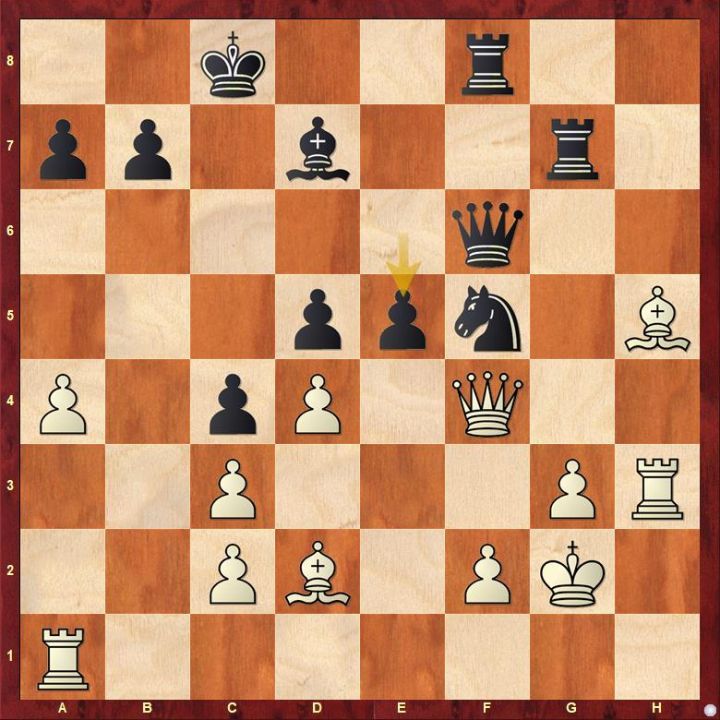 White could have played 28.Qxe5 and provided a strong defense but in a practical game, it is not an easy decision to allow 28...Nh4+ 29.Rxh4 Qxf2+ 30.Kh1 Rxg3 and expect that this will work out for White. The game continued 28.dxe5 Qe7 29.Rah1 Nxg3 soon things fell apart for White. 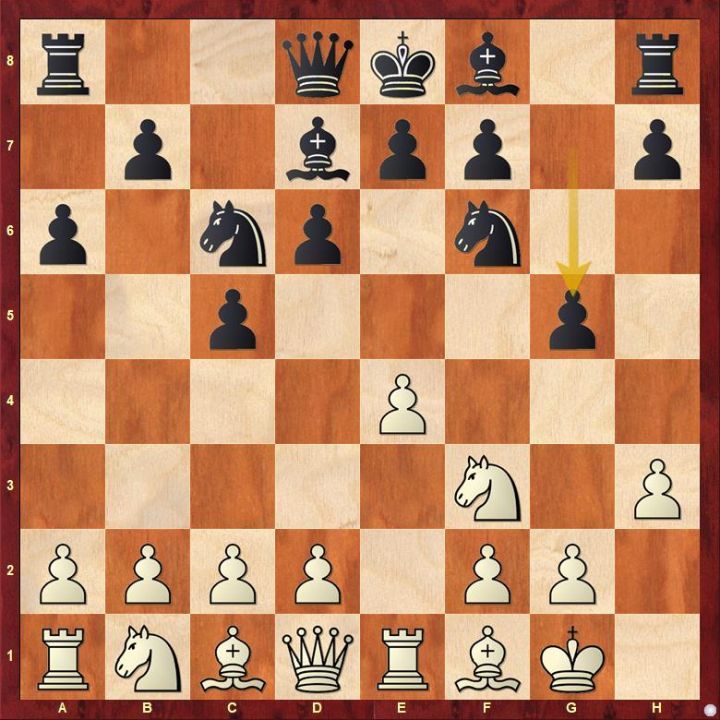 When your opponent plays 7...g5, you can be rest assured that he wants to attack on your kingside and test your defensive skills which is exactly what Karthikeyan did and walked away with a victory.

Karthikeyan warmed up well the other day by winning all 18 games in his simul exhibition | Photo: Biel Chess Festival 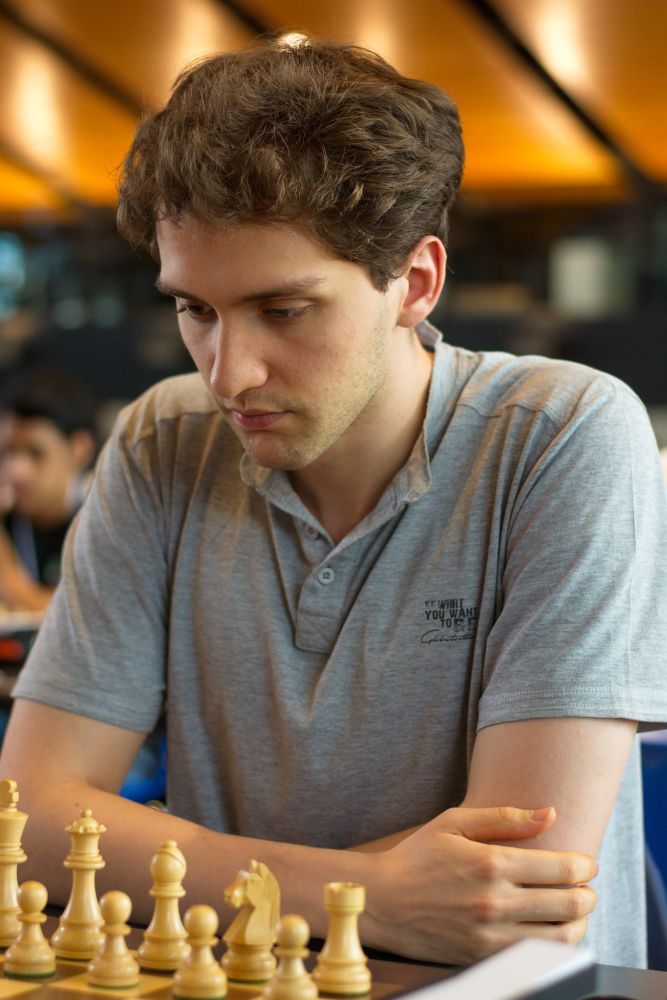 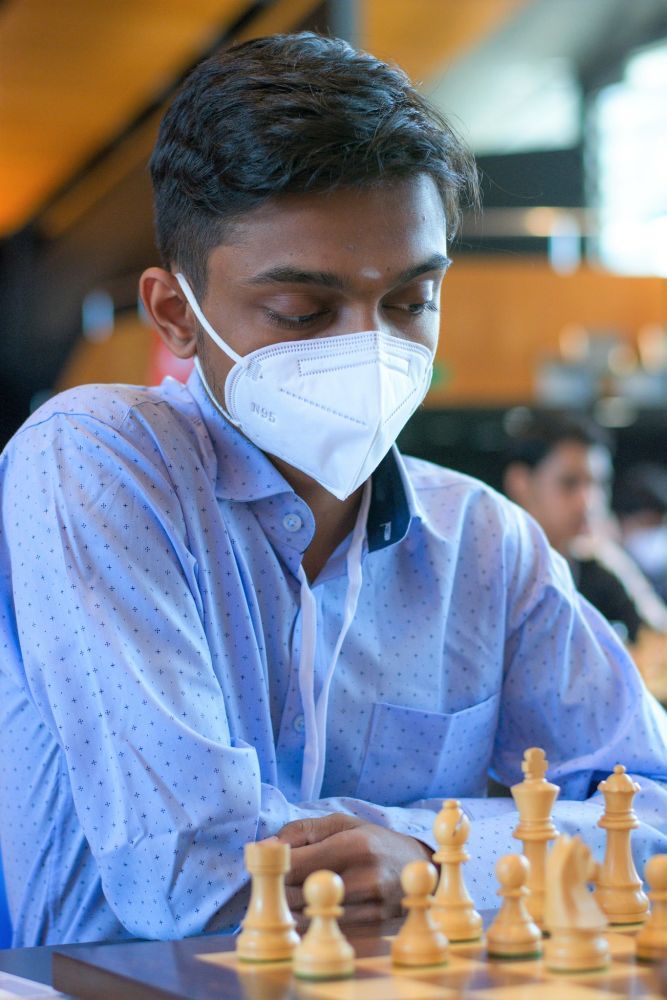 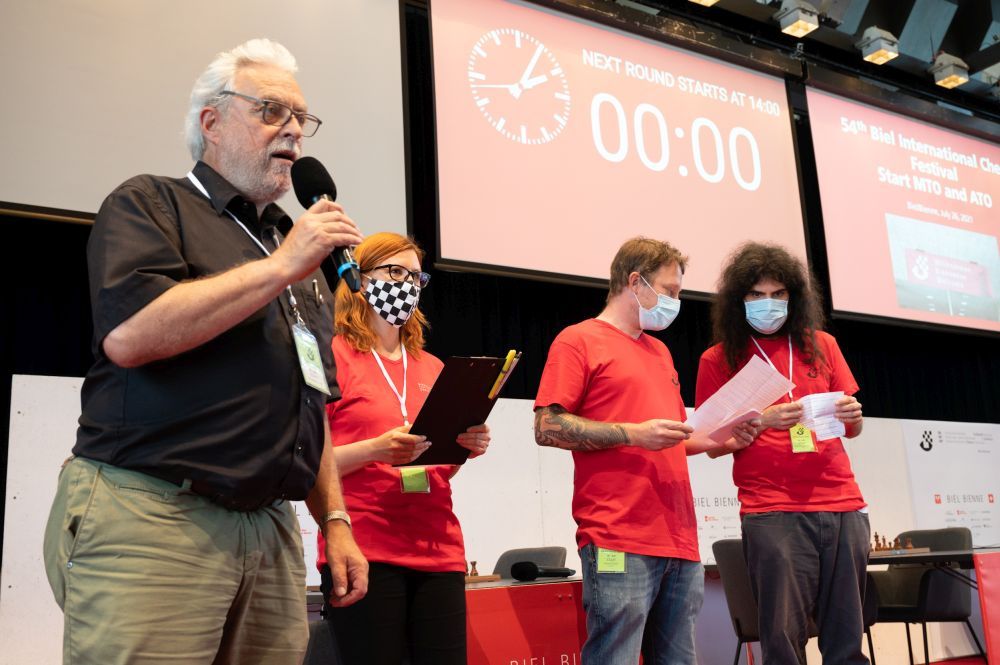 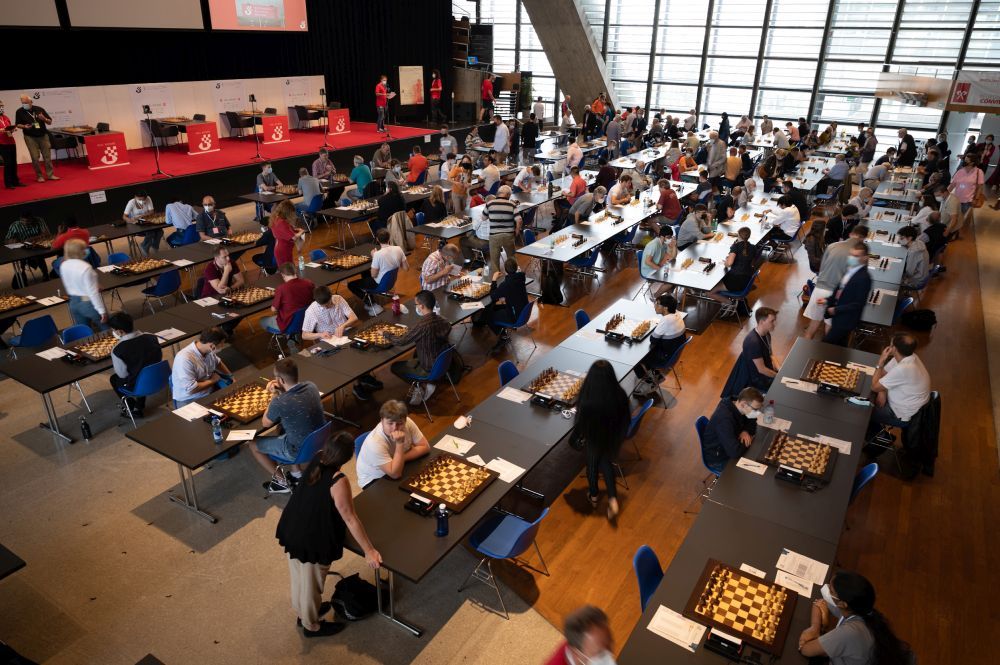