The 1st FIDE World Team Chess Championship for Disabled 2018 started on 15 October in Wyndham Garden Hotel Dresden, Germany. The tournament witnesses the participation of 9 teams. Germany has 4 teams and Russia has 3 teams and the remaining teams are Hungary and Poland. Top seed is IPCA Russia. The event comprises of about 40 players including 2 IMs, 1 WIM and 2 WFMs. The 7-round event will conclude on 21st October 2018. Top 3 teams will receive medals and cash prize. Photo: Tournament Regulations 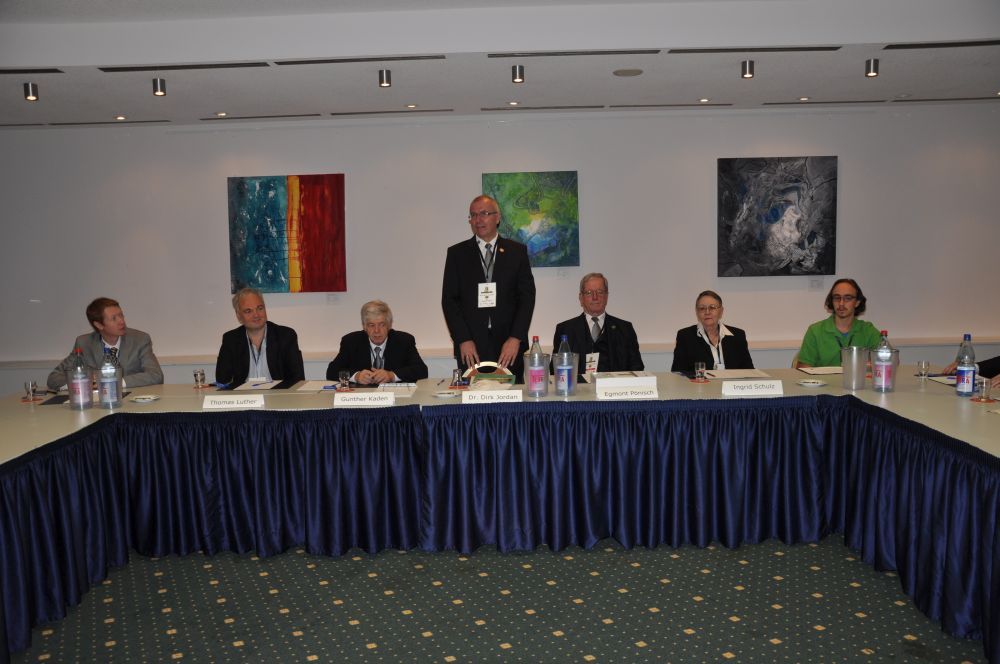 The 1st FIDE World Team Chess Championship for Disabled 2018 started on 15 October in Wyndham Garden Hotel Dresden, Germany. The event is organized by ZMDI Schachfestival Dresden e. V. under the auspices of FIDE. Dr. Dirk Jordan, the Chairman of the Organizing Committee and his team have successfully organized the World Chess Olympiad back in 2008 in Dresden as well as other chess competition of senior and disabled formats in Germany. 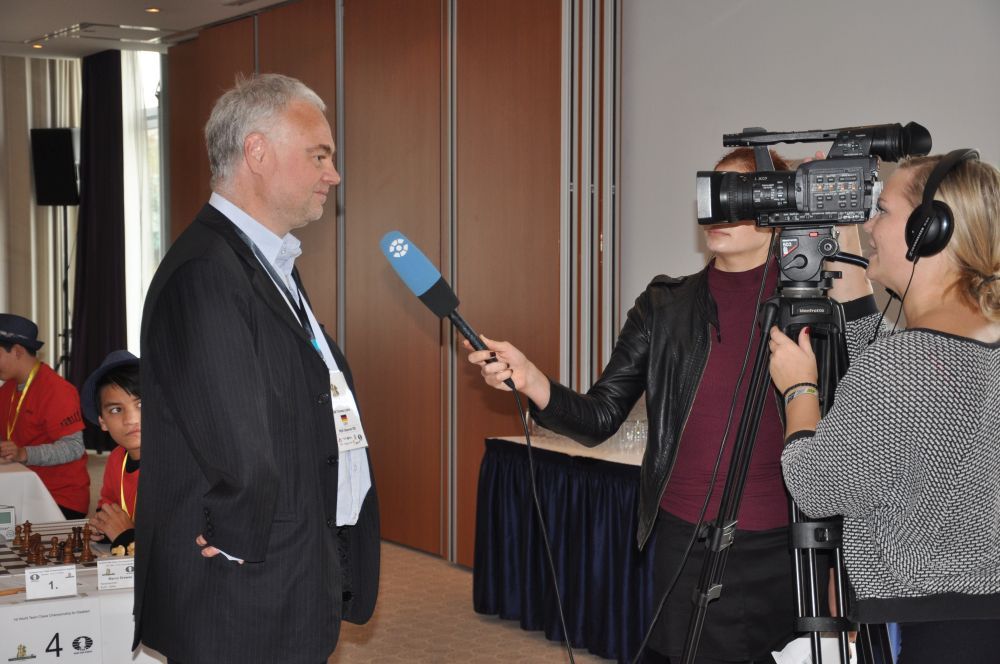 Here is what he replied to the question “Why do we need competitions for people with disabilities” at the 2nd FIDE World Junior Championship for the Disabled: “Special care for all chess players is a motto of the events for disabled players. They feel supported and understood. Here we have nice playing conditions that help players deal with the complexities of the competition.” 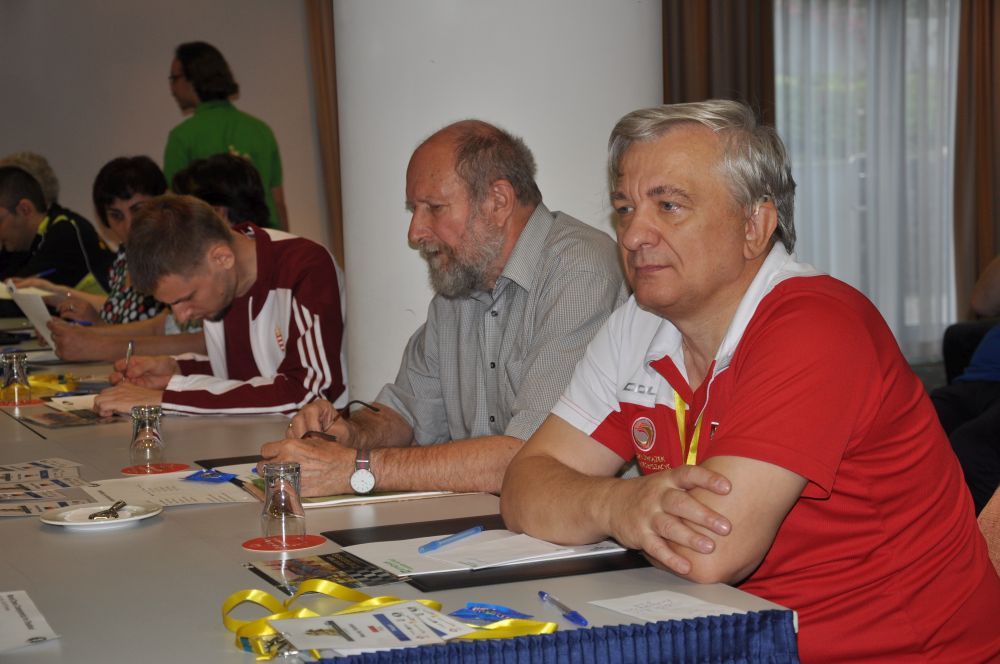 The Captains’ meeting was opened by the Chairman of the Organizing Committee Dr. Dirk Jordan who greeted representatives of the teams and introduced the team: Chief Arbiter, Social program coordinator, FIDE Observer and other arbiters. 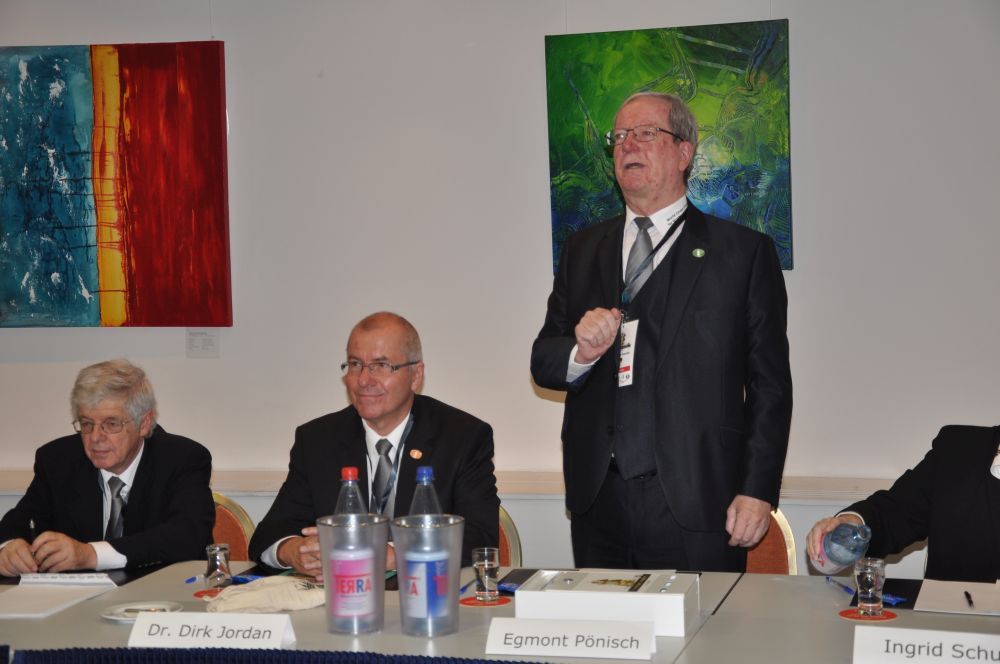 Chief Arbiter Egmont Poenisch briefed captains on the regulations of the competition. 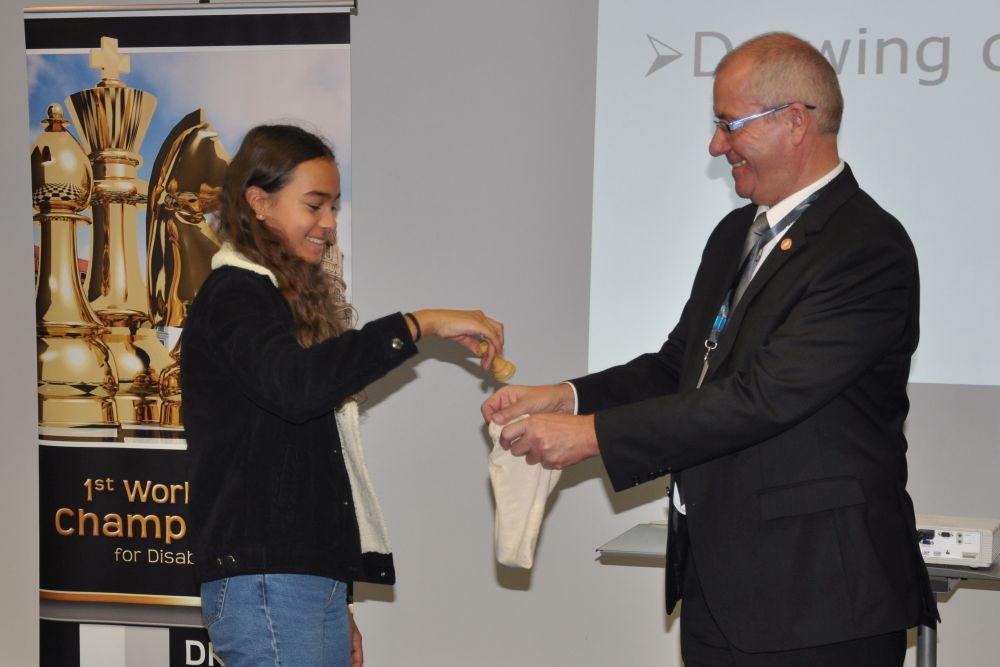 The team compositions were confirmed and the drawing of lots was conducted. 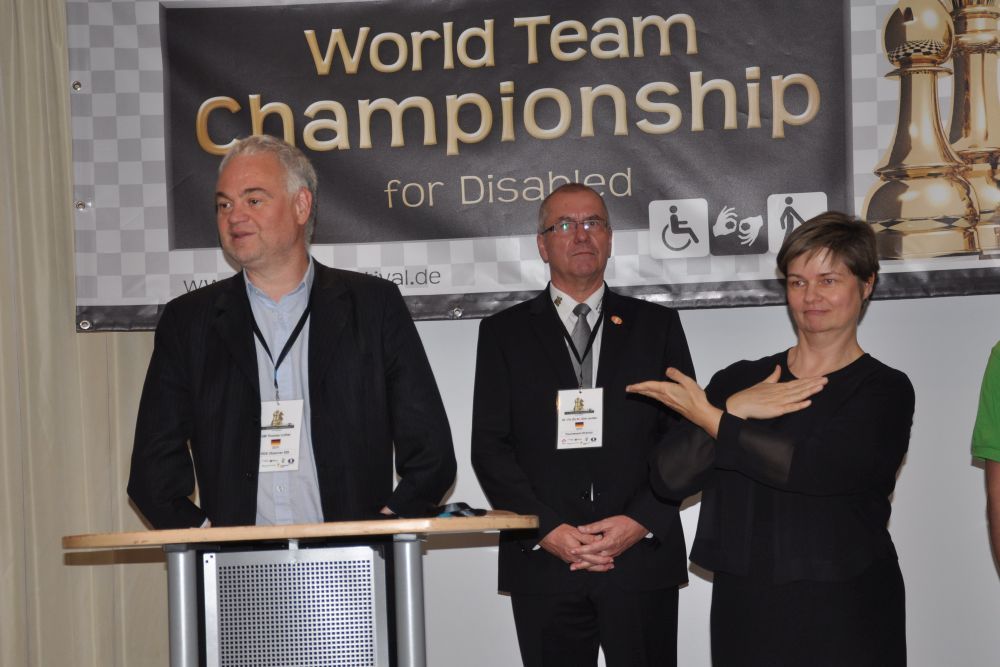 Opening Ceremony took place on the same day. It was started by Dr. Dirk Jordan who later on gave the floor to Thomas Luther who warmly greeted the participants and wished them luck. 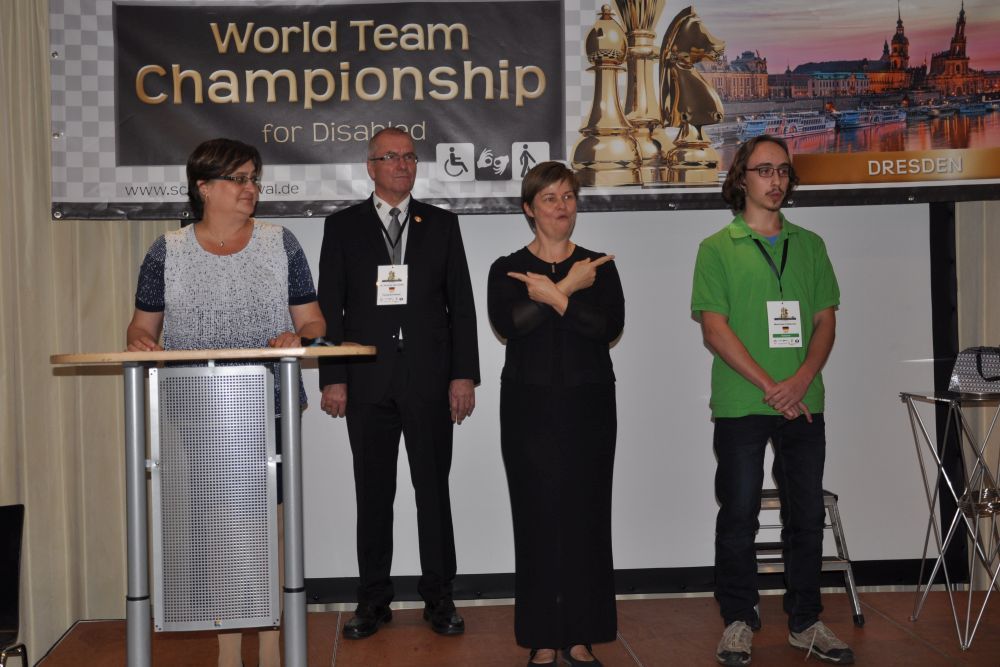 The IPCA President Svetlana Gerasimova thanked the organizers for the unique opportunity for all disabled chess players to compete in the World Team Championship for the world chess title. 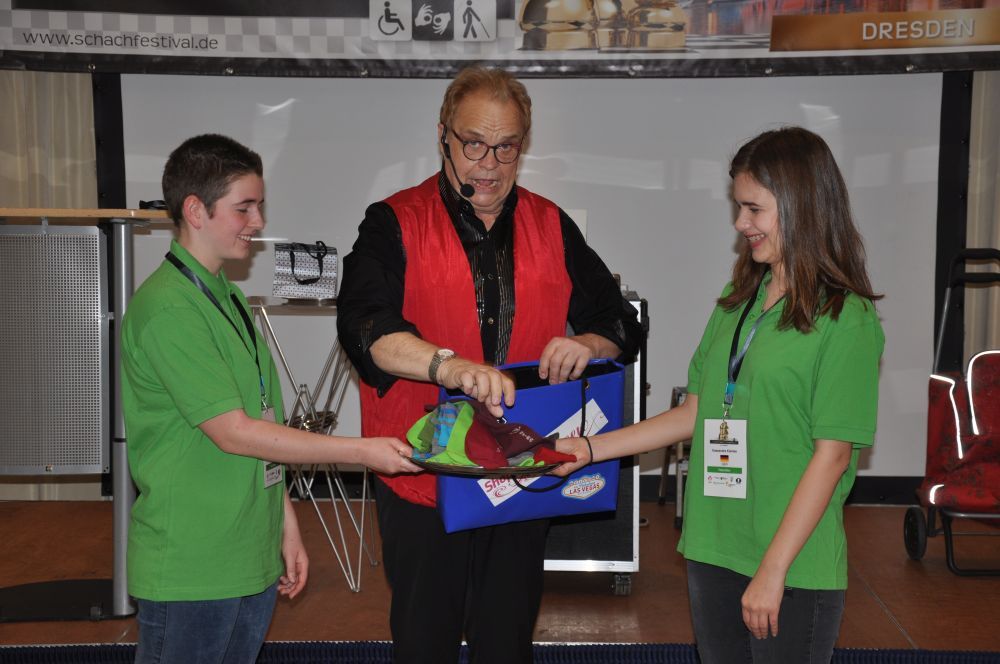 The magic show by famous magician Andreas Roethig at the Opening Ceremony. It made the start of the event special. 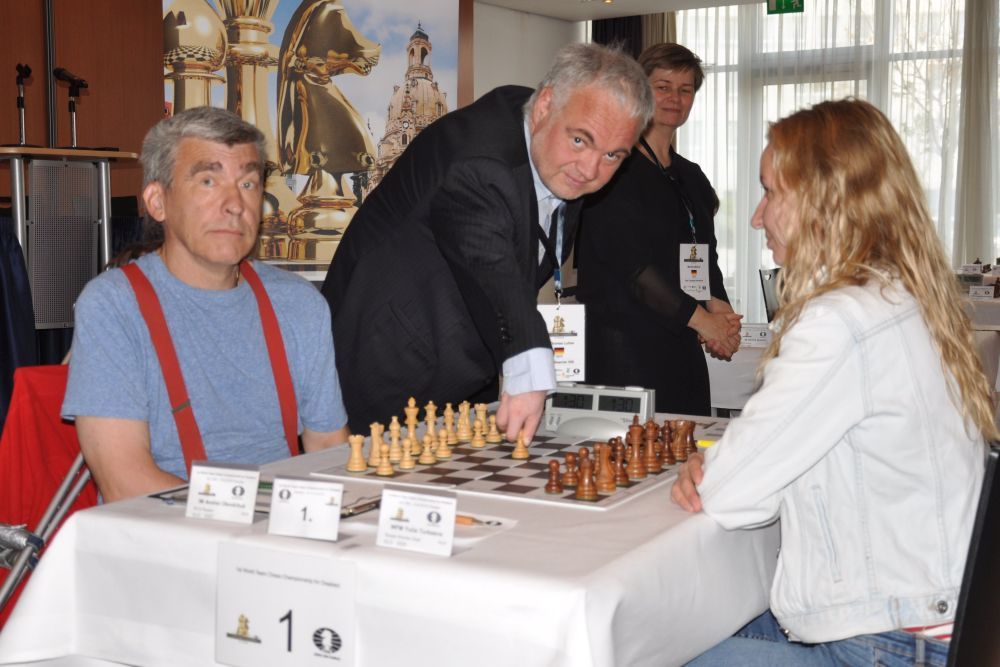