At the end of the fourth round of the World Youth 2019, we have one section where a sole leader has emerged. In under-14 open section Srihari LR claimed the pole position by beating top seed Sreeshwan Maralakshikari. The game was so good that it was given the "ChessBase Game of the day prize"! Divya Deshmukh, the top seed in under-14 section lost her game to a player rated over 400 points below her. Rudik Makarian, Aronyak Ghosh in under-16 open and Leya Garifullina and Nazerke Nurgali in under-16 girls are the four other players on a perfect score of 4.0/4. We bring you a detailed report with pictures, game, analysis from the Hotel Renaissance in Mumbai.

The difference between a strong grandmaster and a strong International Master is not huge, but it does show at critical moments in the game. Take for example the interesting game between Praggnanandhaa and Petriashvili. Pragg is a strong GM now with an Elo of 2567, just 14 years old, but already quite experienced. Petriashvili, on the other hand, is rated 2441 and is a strong International Master from Georgia. They played each other in round four of the World Youth under-18 championships 2019 and after 15 moves the following position was reached: 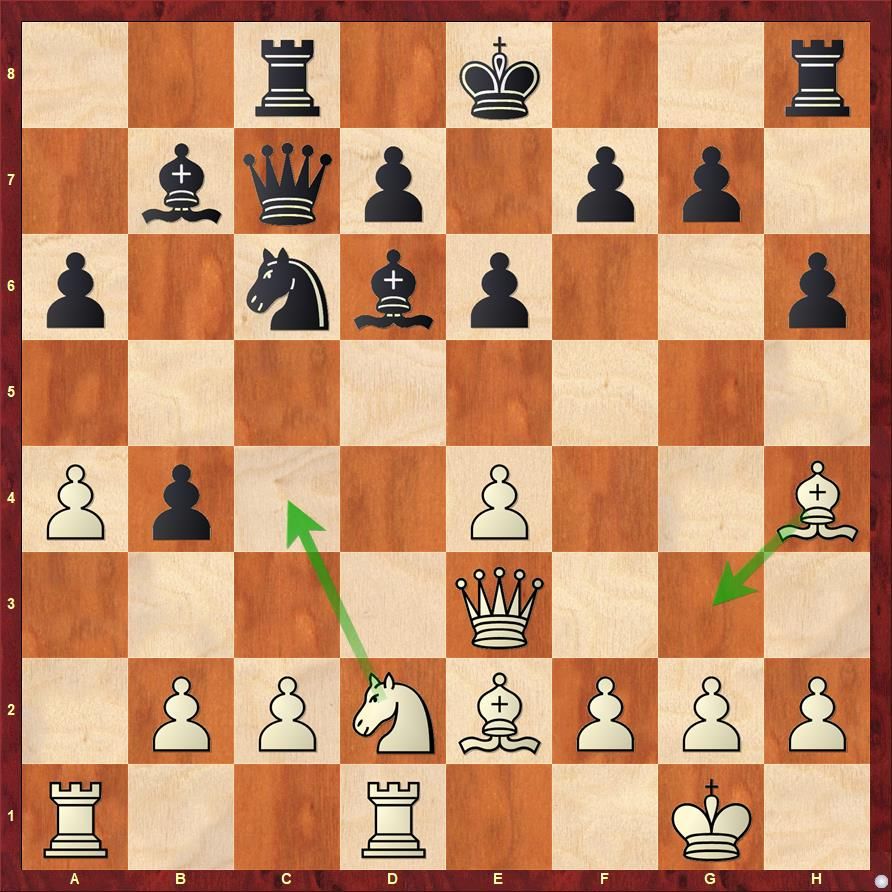 Black has just played his bishop to d6. Pragg had an important decision to make. Should he play 16.Nc4 or 16.Bg3. The latter was safer, while the former meant that the h2 pawn is en prise. What would you choose?

Pragg's choice of Nc4 was interesting, but Bg3! was a simple and strong move that would have given White a clear edge. After 16.Nc4, white took the pawn on h2, and after Kh1 we reached the following position: 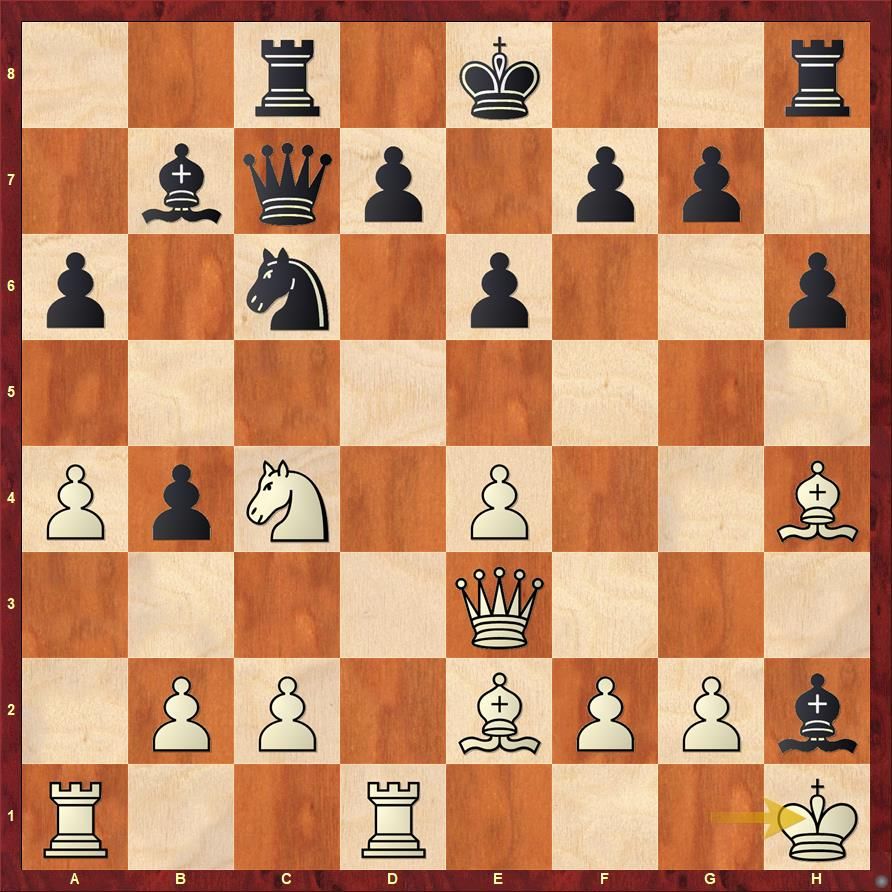 It was important here for Black to understand that White is threatening Qc5 along with a clamp on the dark squares with Nd6+. Hence, Black should have just castled. Yes, g3 is the main issue after that but when the a8-h1 diagonal is opened up, Black can look out for tactics beginning with ...d5! The position is still unclear, but objectively Black's chances are better. Petriashvili played ...Bf4 in the above position and after Qc5 White was back in the driver's seat. Pragg managed to win the game after that. As you can see the window for grabbing the initiative/advantage is really small and if you don't take them at the right moment then against strong GMs like Praggnanandhaa, you won't get a second chance.

We talk to Praggnanandhaa after his win over Petriashvili

Standings in under-18 open

Praggnanandhaa is leading the tournament along with five other players Aryan Gholami from Iran, Viachaslau Zarubitski from Belarus, Iniyan P. Aditya Mittal and Arjun Kalyan from India.

Aditya Mittal, just 13 years old, has been showing some very interesting endgame technique. In round four he managed to score a win from a position that looked completely equal. Check out this video and learn from the youngster. 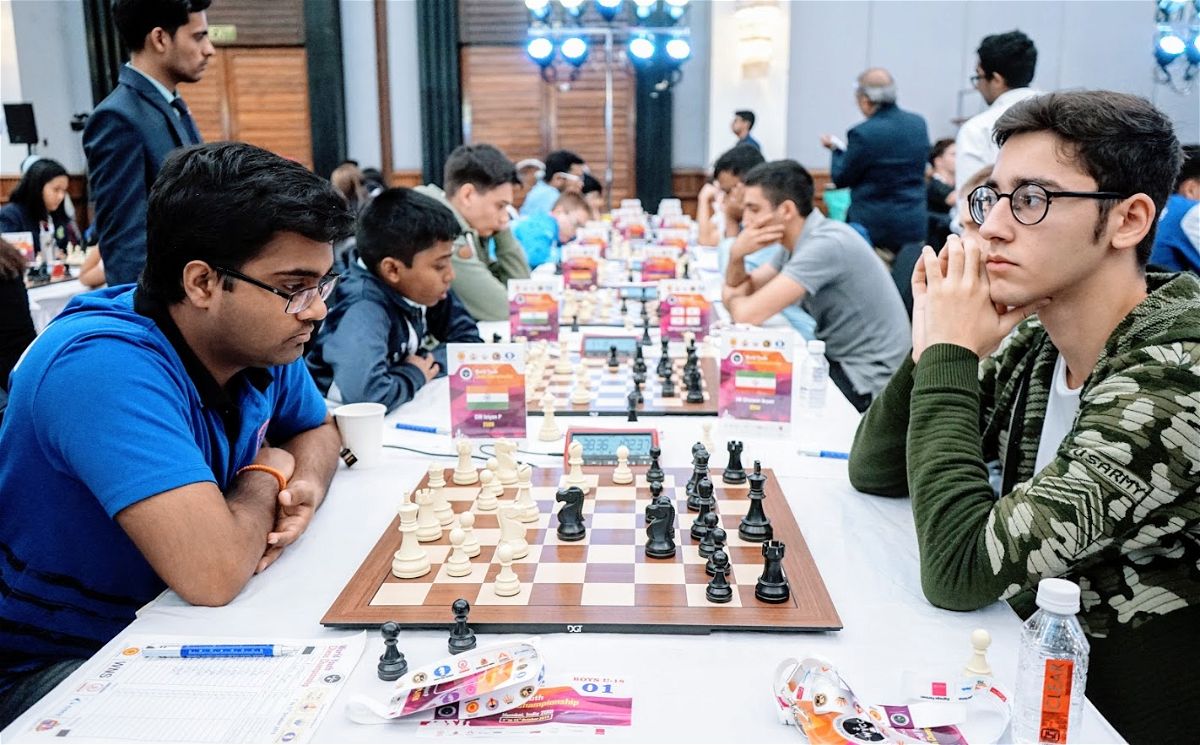 The top board game between Iniyan and Aryan Gholami ended in a draw | Photo: Amruta Mokal

In the girls under 18 section we have Honorata Kucharska and Viktoria Radeva who are in the lead with 3.5/4. Top seed and defending champion Polina Shuvalova is currently on 3.0/4. She had some excellent chances to beat her opponent Honorata Kucharska, when the latter took too many risks. But the game eventually ended in a draw. We speak to Shuvalova after her game and analyze this complex game with her:

Standings after round 4 in girls under-18

In the under-16 open section Sankalp Gupta was playing on the top board against Rudik Makarian of Russia. The game was oscillating between equality and slight advantage for White (Sankalp). However, at some point the Indian IM went wrong and landed up losing a piece. 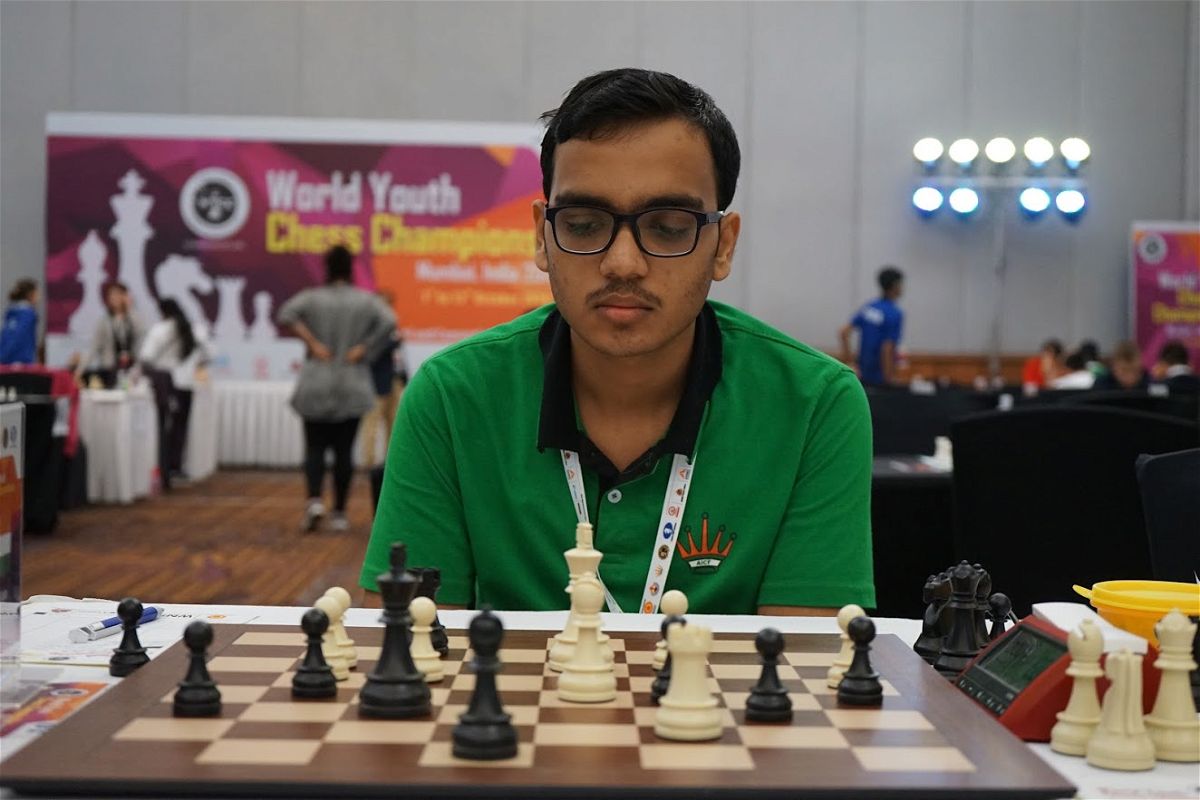 Sankalp Gupta tried too hard and in the end had to concede the full point  | Photo: Amruta Mokal 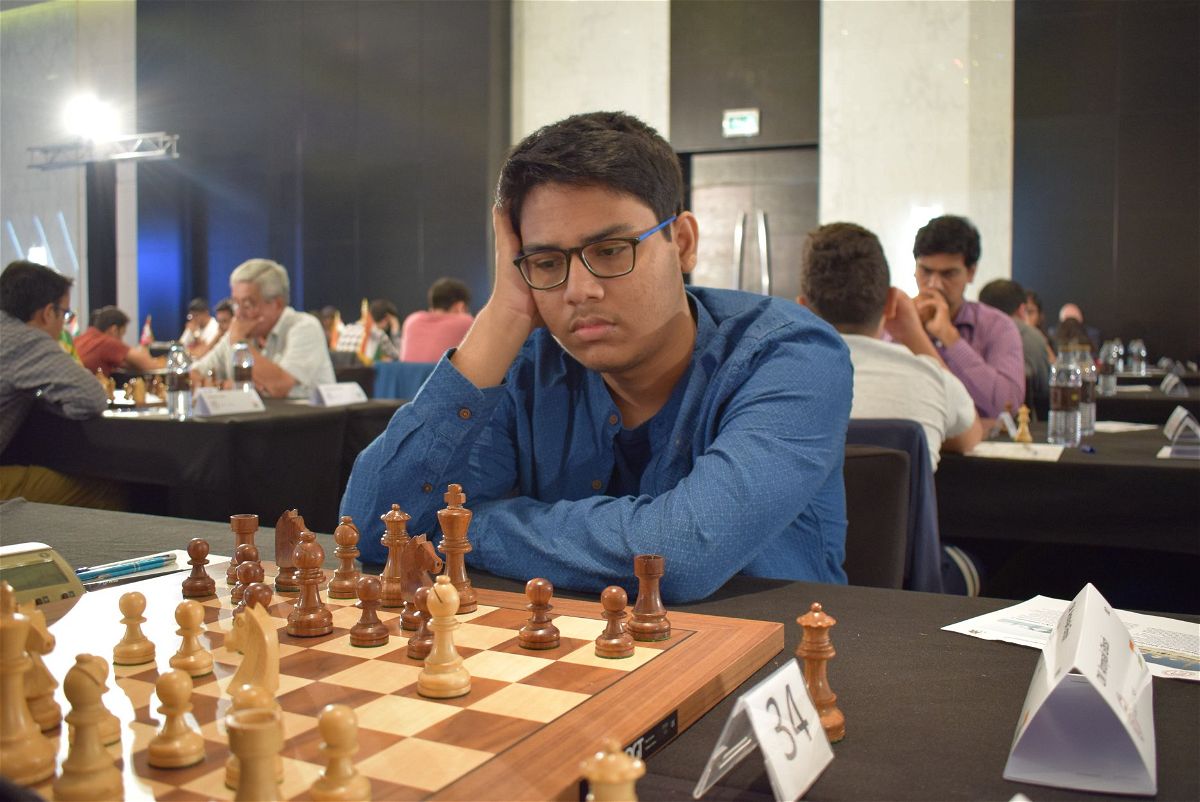 Aronyak Ghosh showed the power of two bishops as he outplayed his opponent Lucas Tomiello. Aronyak joins Rudik at the top with 4.0/4. | Photo: Rupali Mullick

Standings for round 4 in under-16 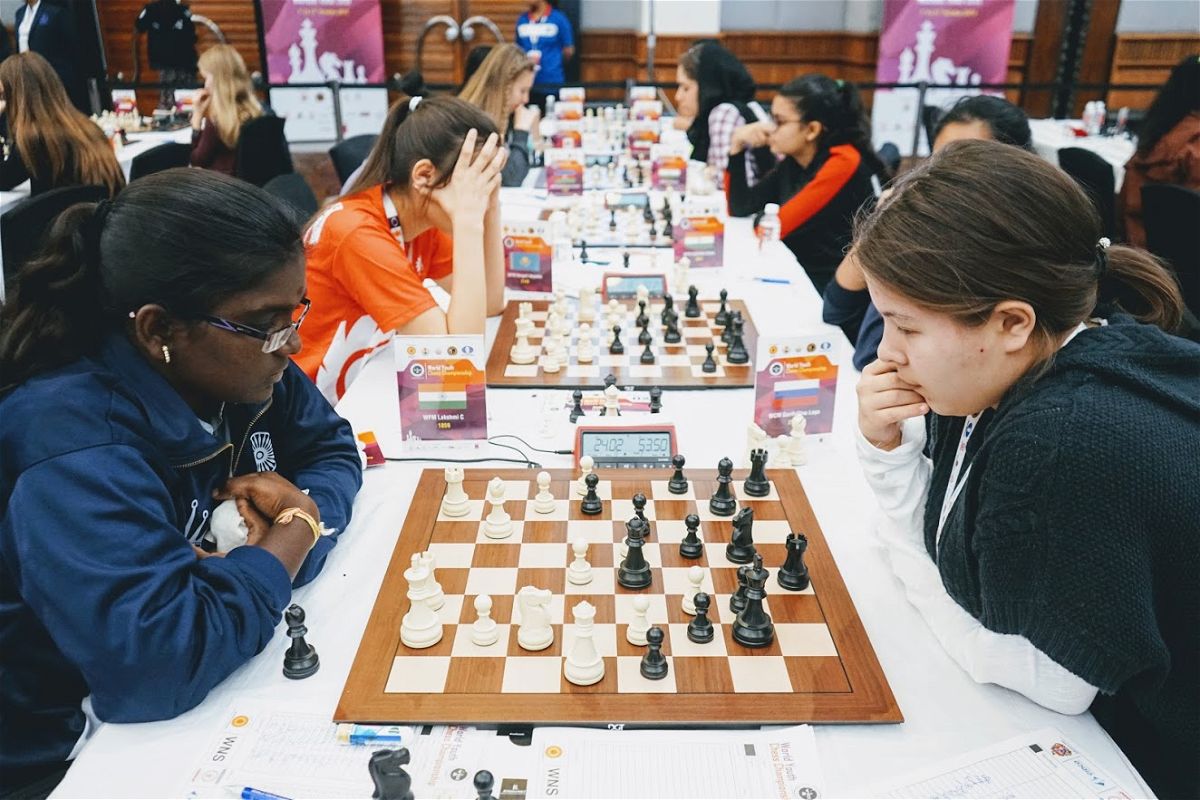 Leya Garifullina managed to outplay Lakshmi C with the black pieces to be one of the girls under-16 section  | Photo: Amruta Mokal 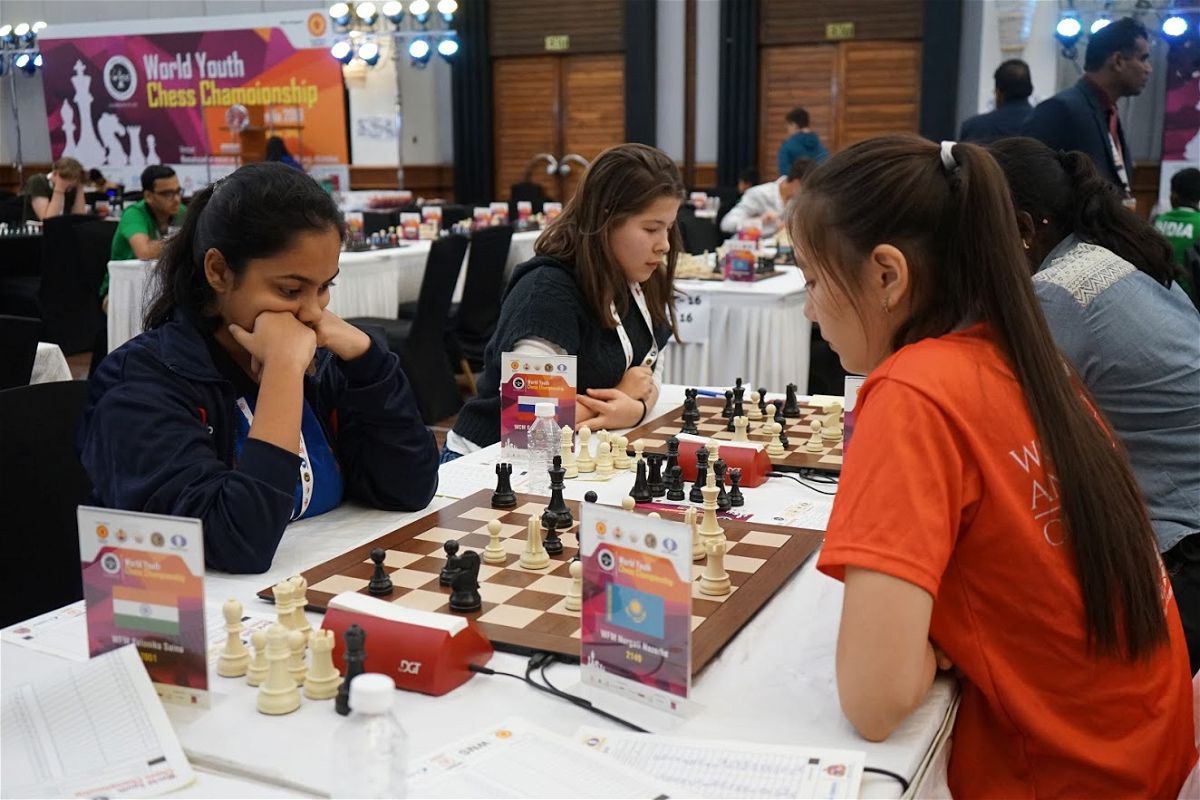 Nazerke Nurgali beat Saina Salonika and moved to 4.0/4. Nurgali and Garifullina lead in the under-16 girls section.  | Photo: Amruta Mokal

Standings in under-16 girls after round 4

Divya Deshmukh was dubbed as the favourite to win the under-14 girls section. With 2358, she was a solid 50 points ahead of the second seed Rakshitta Ravi and a 200-point gap separated her and the third seed. But the game of chess is always unpredictable and this is what happened in the fourth round of the World Youth Championships 2019. Divya lost her game to Bat-Erdene Mungunzul from Mongolia (1912). 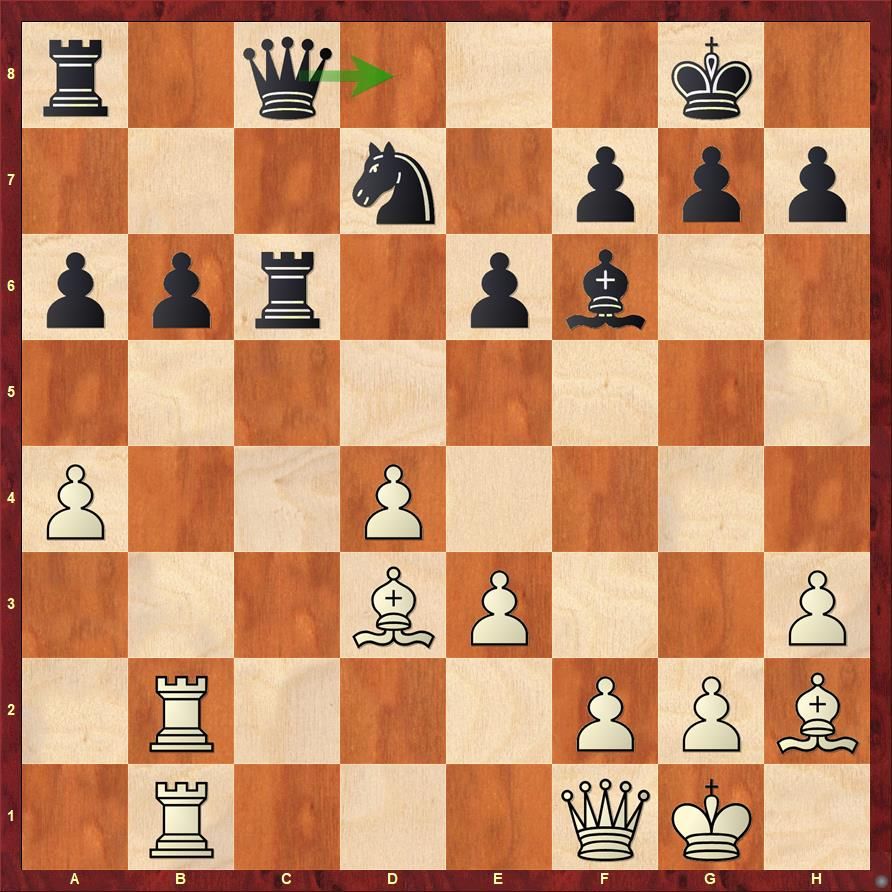 Black's position is worse, but Divya moved her queen to d8 and simply gave up the a6 pawn. After that it as pretty ease for Mungunzul to score the full point 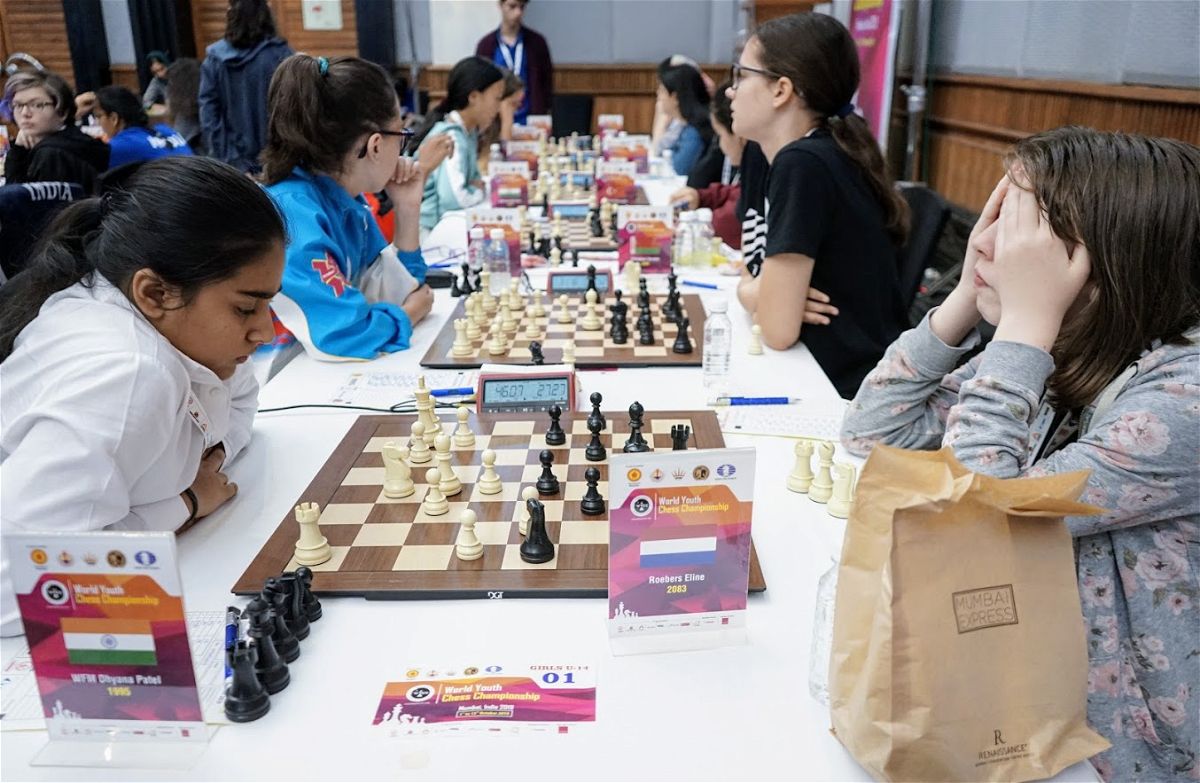 Dhyana Patel and Eline Roebers drew their game on the top board to move to 3.5/4  | Photo: Amruta Mokal

As many as seven girls are in the lead with 3.5/4. This is one section where the fight for the title is going to be quite intense.

Standings after round 4 in the under-14 girls 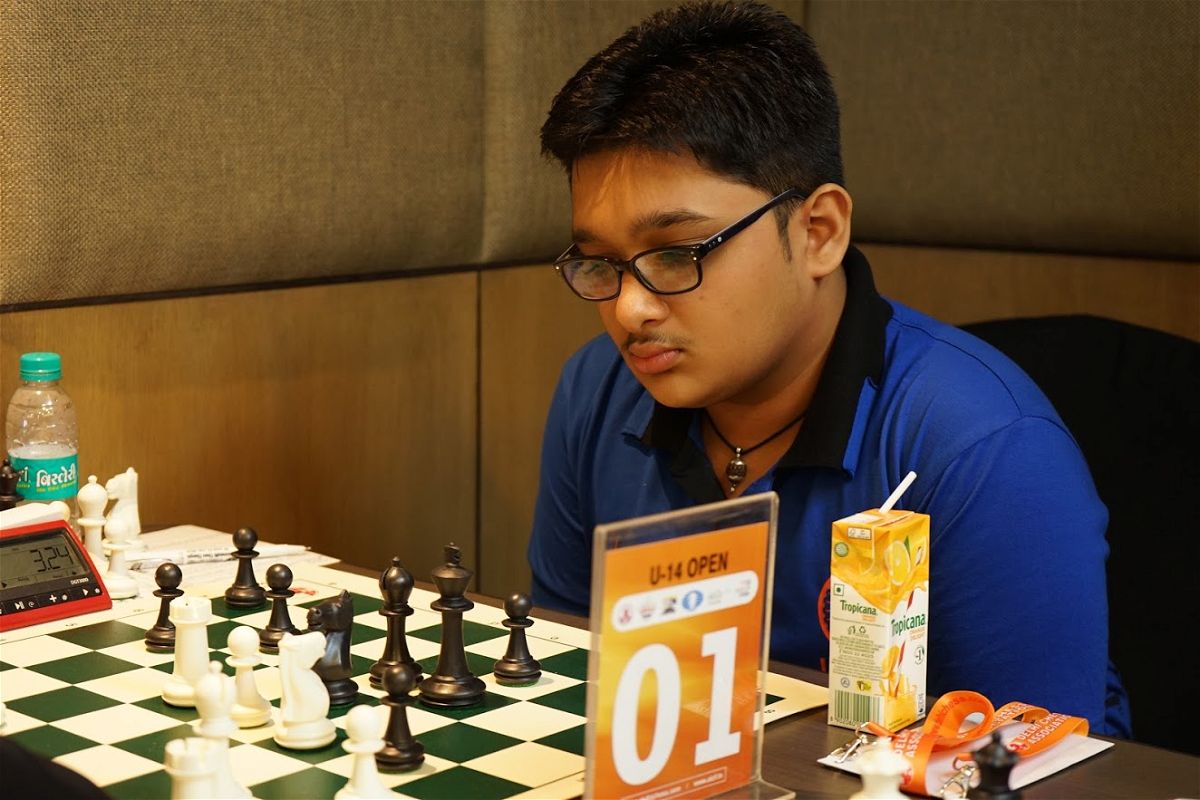 Srihari LR managed to beat top seed Sreeshwan Maralakshikari in under-14 open section and is now the sole leader with 4.0/4 | Photo: Sagar Shah

In the previous round Sreeshwan was lucky as he converted a completely minus position into a win. But this time he wasn't fortunate enough as Srihari played one powerful move after another to win the game.

It was a powerful game by Srihari and for this we award him with the best game of the day prize by ChessBase. He is awarded the vol.1 of Fabiano Caruana's navigating the Ruy Lopez: 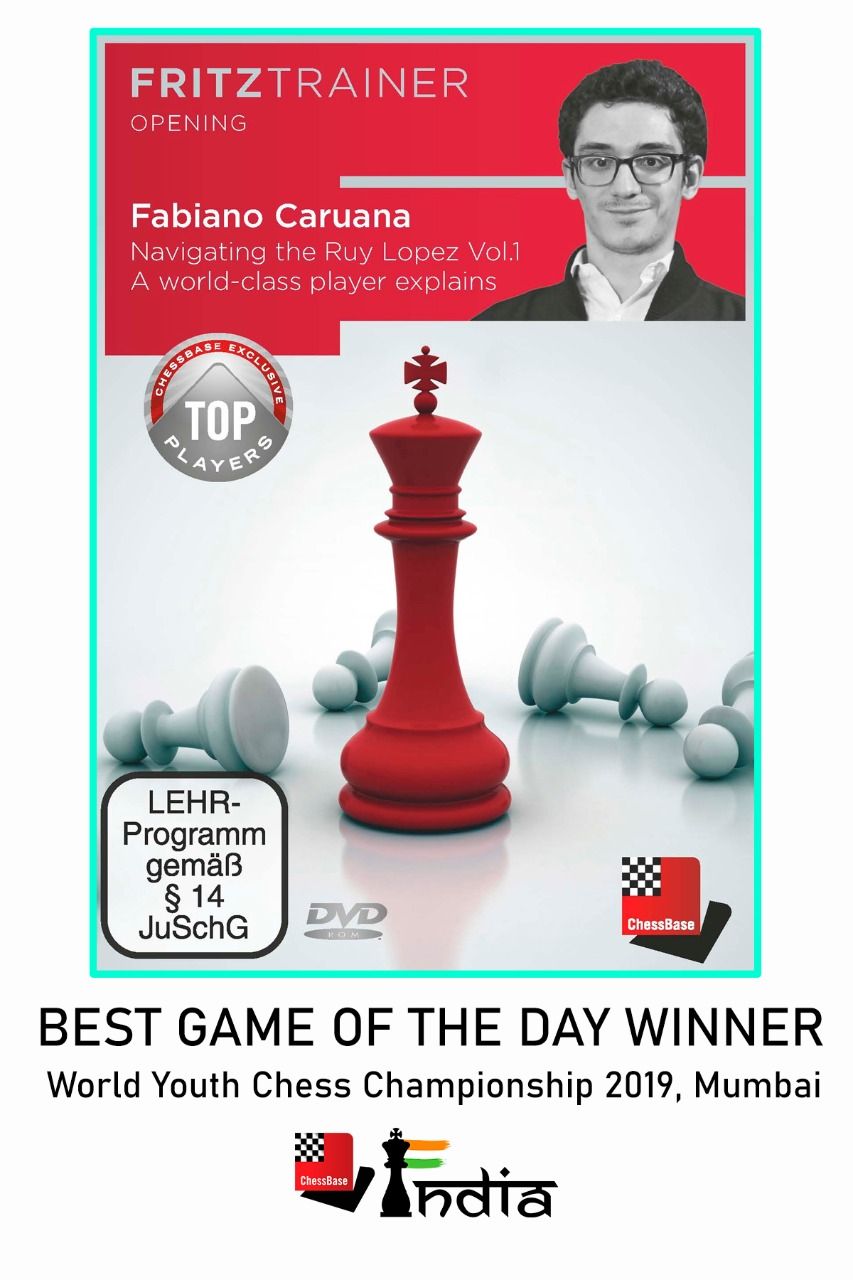 Standings in the under-14 section after four rounds

We speak to the well known grandmaster, trainer and commentator Dimitri Komarov. He speaks about how he tried to change the mindset of chess players in Sri Lanka, his current assignment with the UAE team and lastly about Nihal Sarin. Komarov is of the opinion that when it comes to positional play Nihal is stronger than Magnus Carlsen!
Elene Kostava is playing in the under-18 girls section. She is also a journalist by profession as she works in the Georgian Chess TV. We speak with Elene on different topics that includes chess in Georgia, her experience in India and her future plans! 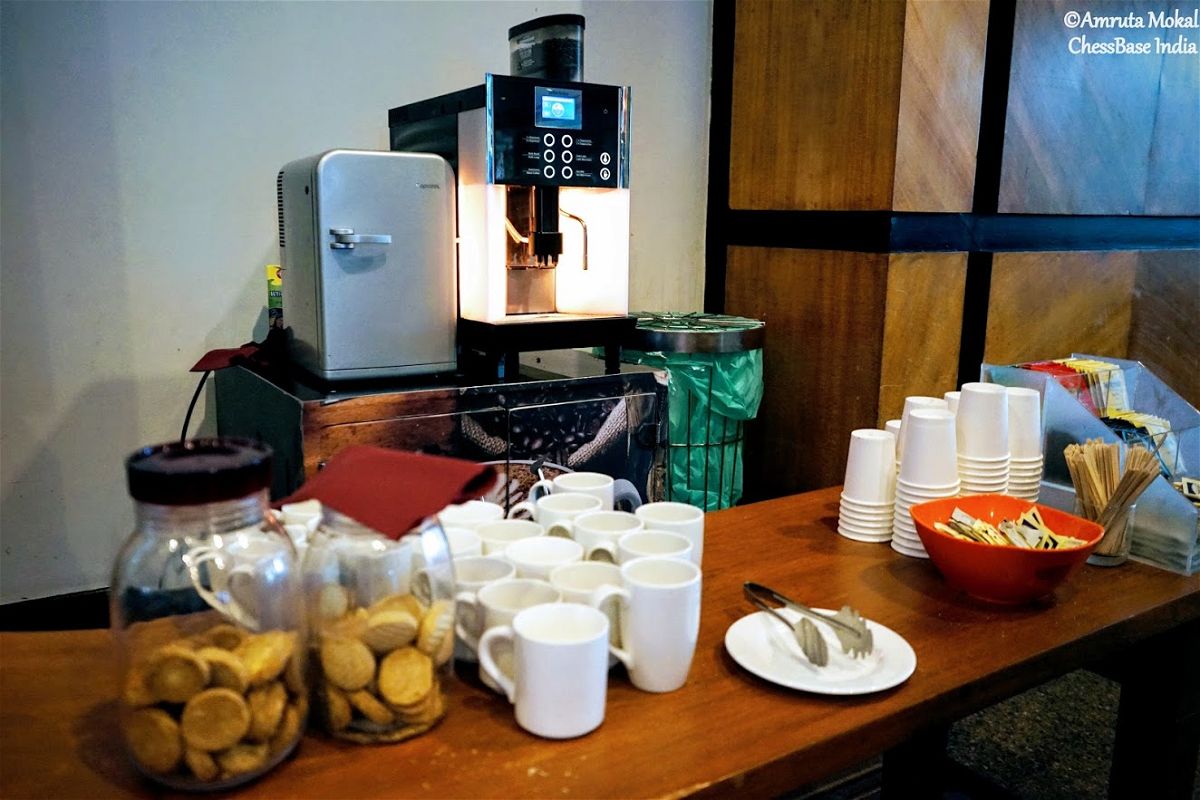 It has been an excellent gesture by the organizers to provide tea, coffee, and cookies absolutely free of cost to not only the players, but also the coaches, parents and accompanying persons!  | Photo: Amruta Mokal 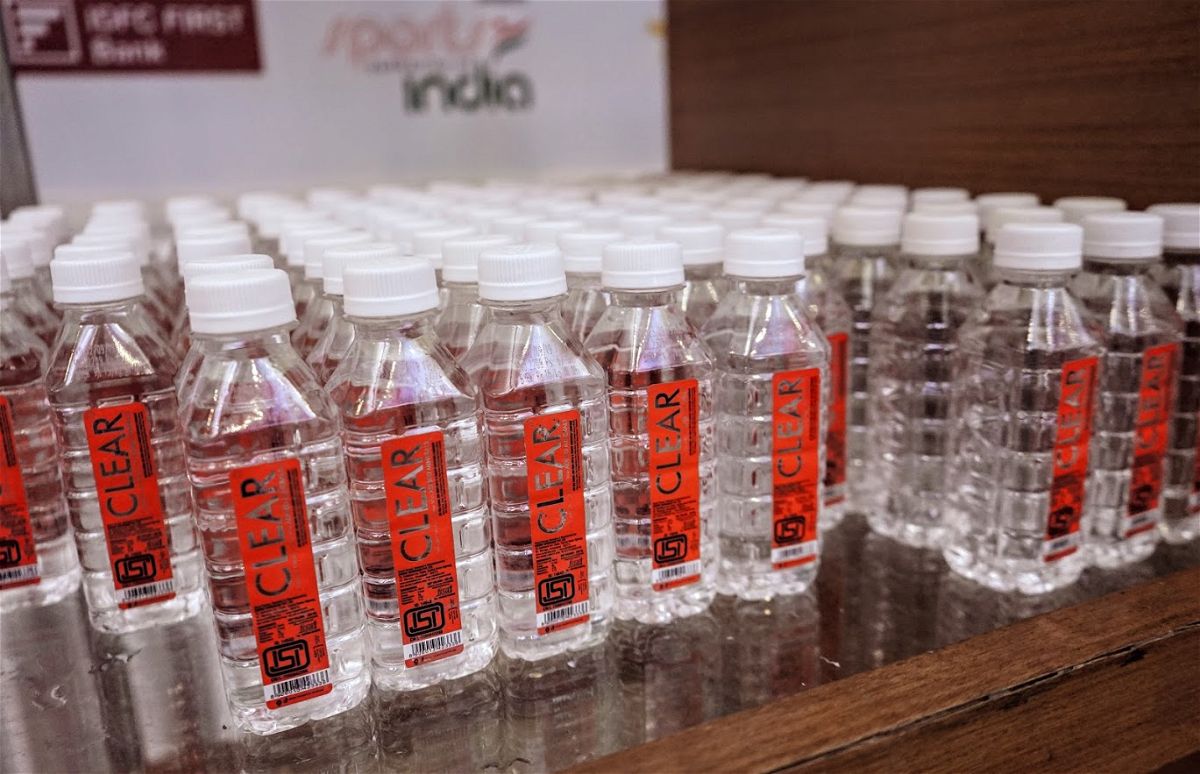 Huge number of water bottles are consumed each day! 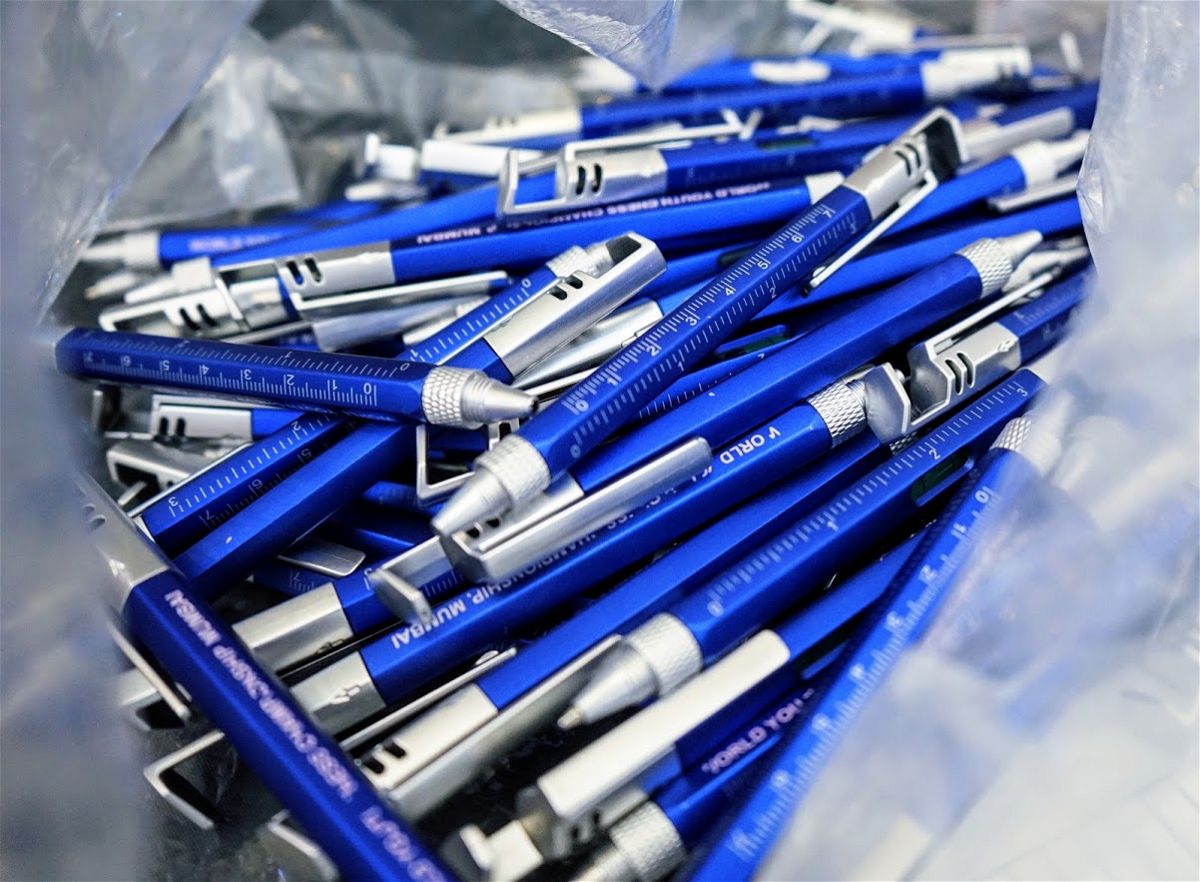 When the players are not allowed to bring their own pens, you need to have a huge stock of pens!  | Photo: Amruta Mokal 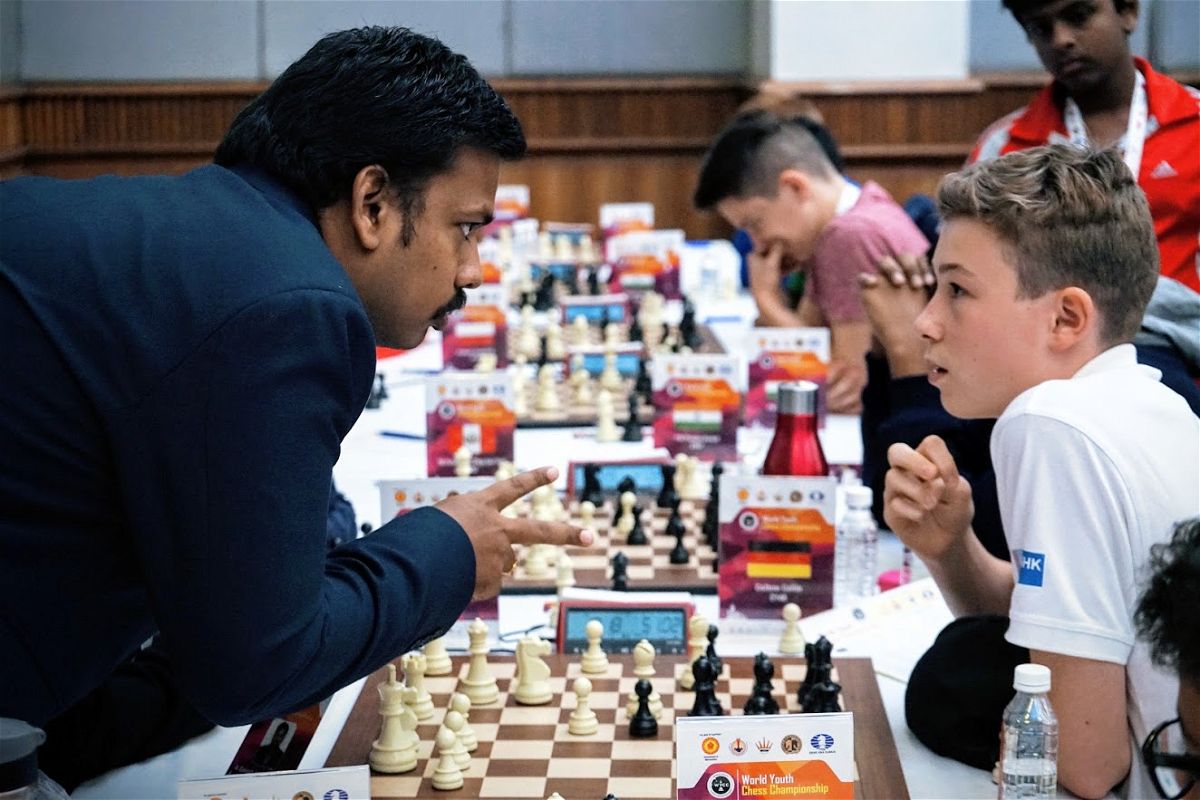 With over 450 youngsters taking part in six different categories, the arbiters have their hands full  | Photo: Amruta Mokal 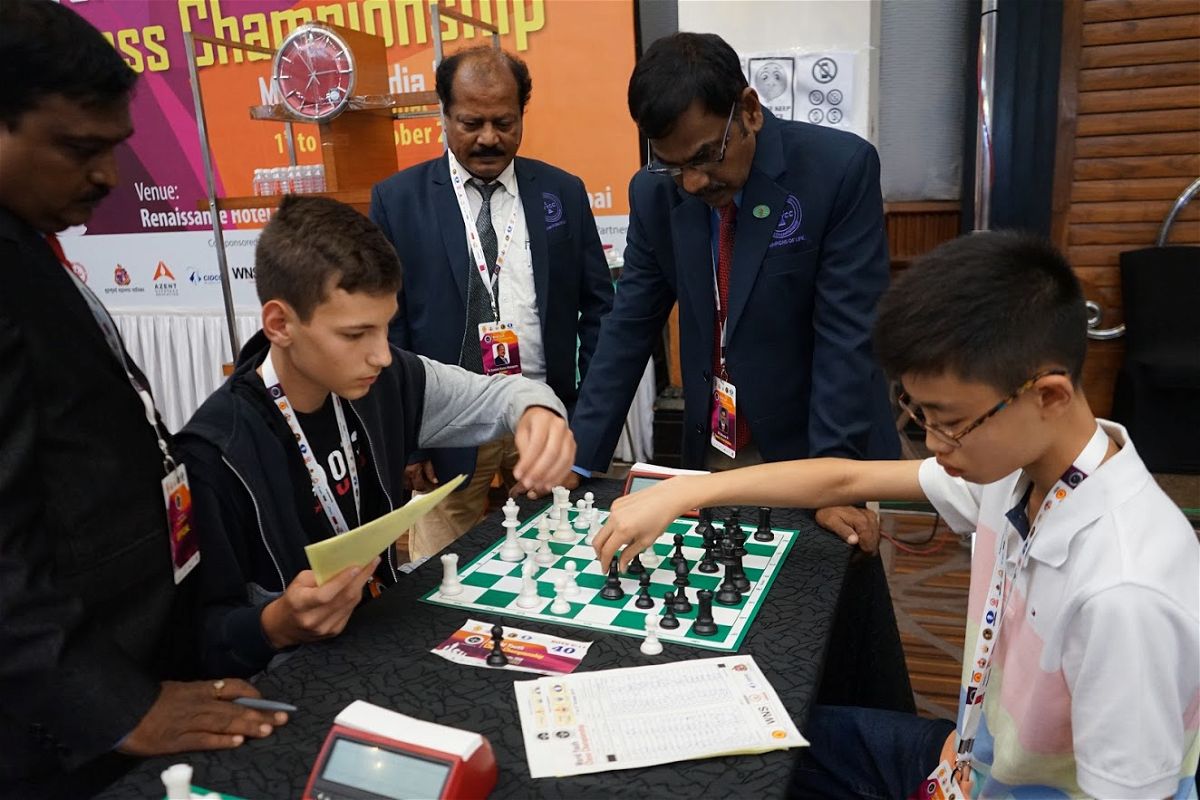 So many claims for threefold repetitions have to be carefully observed  | Photo: Amruta Mokal 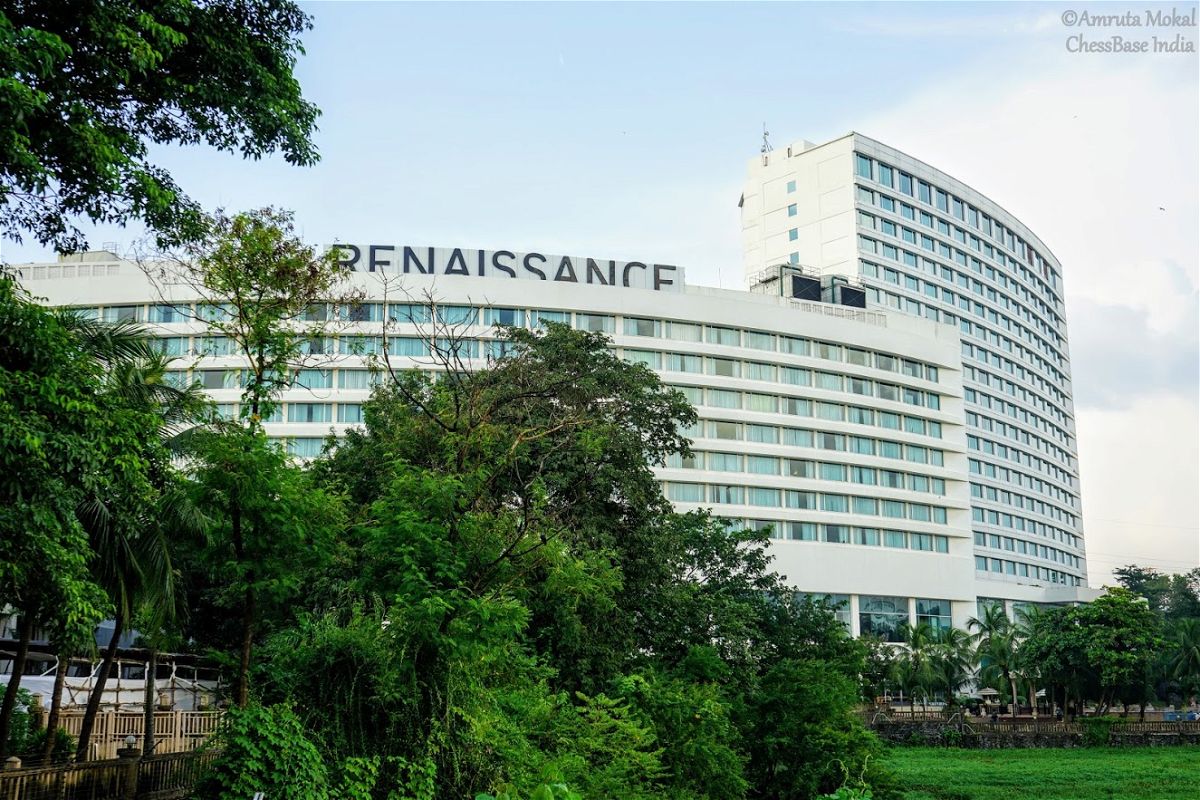 Hote Renaissance by the Marriott Group is where the tournament is held. It is a five star property  | Photo: Amruta Mokal 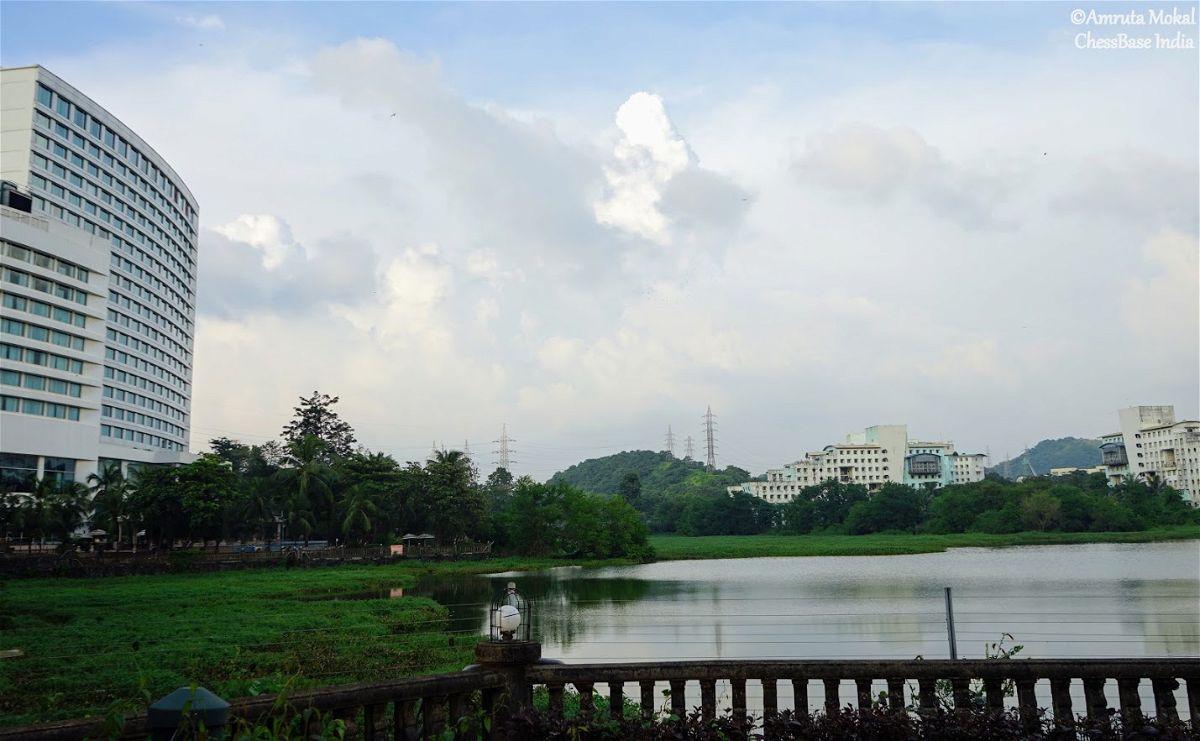 It oversees the Powai Lake, which gives many of the rooms a perfect view!  | Photo: Amruta Mokal 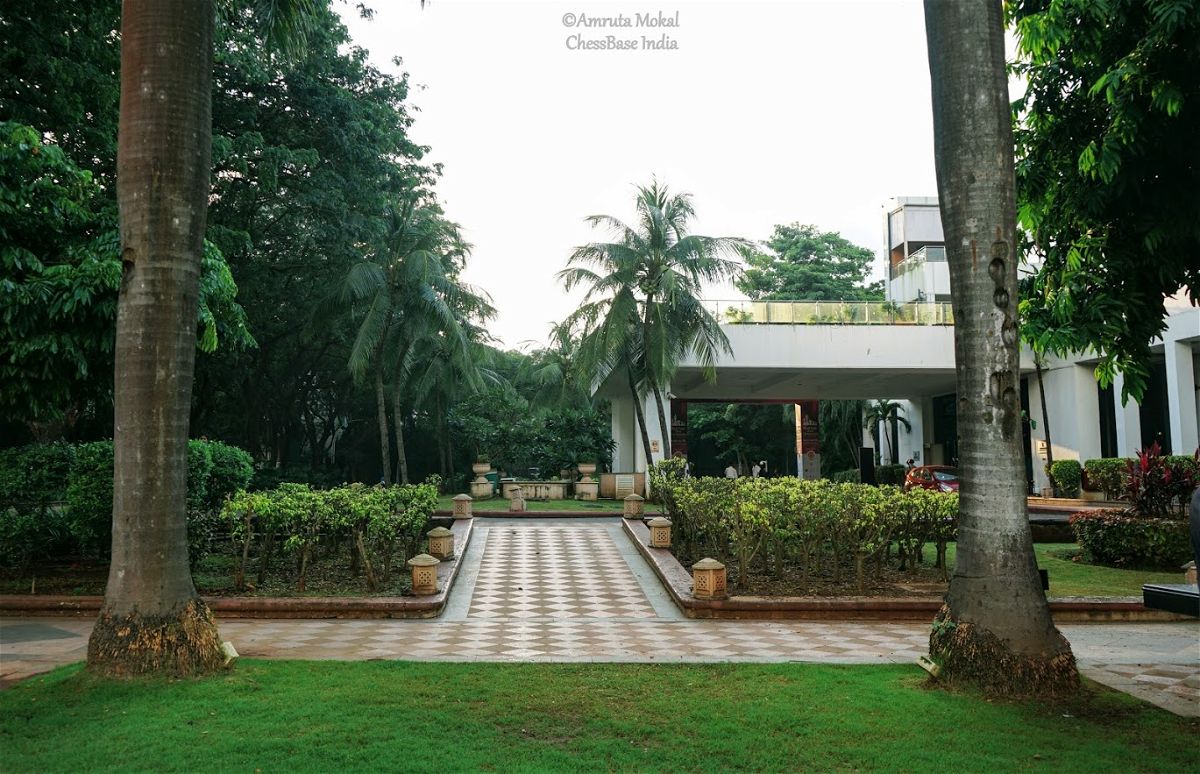 Most of the international players have hardly gone outside the hotel. But within the premises they have enjoyed themselves!  | Photo: Amruta Mokal 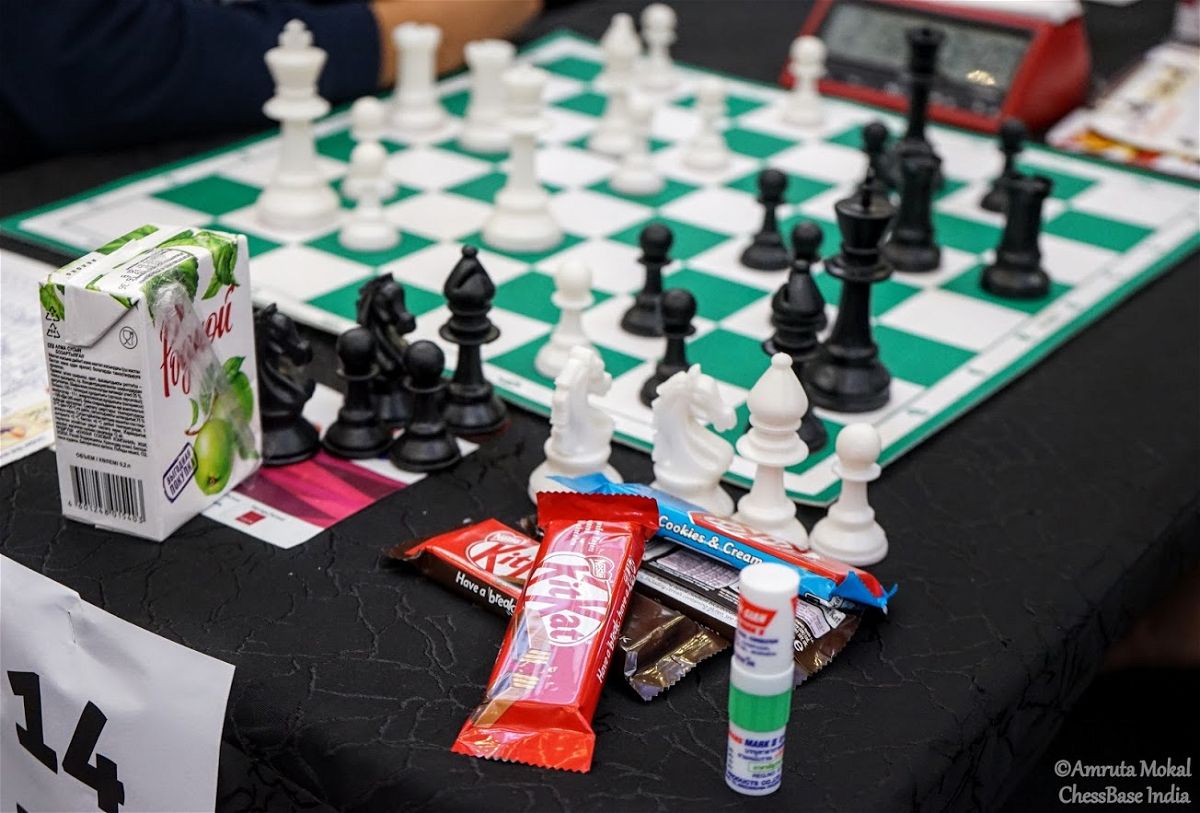 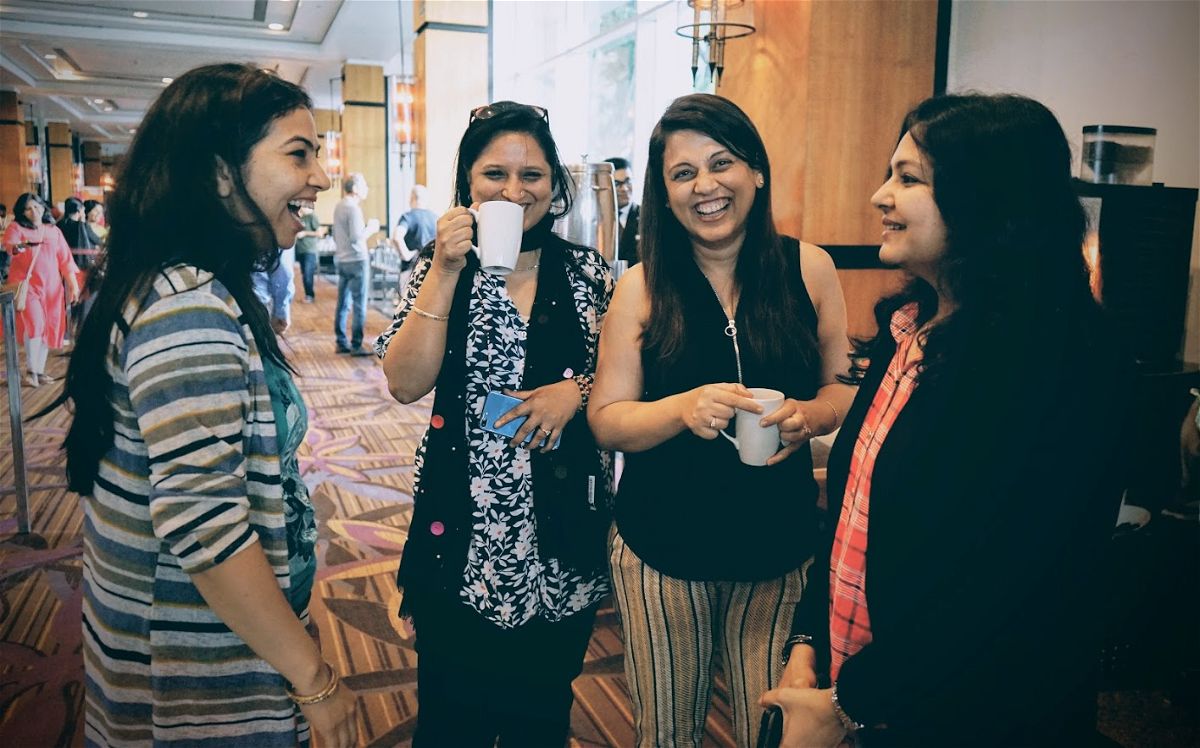 For the parents of the players fighting it out inside the playing hall, this proves to be a great bonding time!  | Photo: Amruta Mokal
Related news: