The unfortunate incident of Priyanka Nutakki at the World Juniors 2022

Priyanka Nutakki was the top rated Indian player at the World Junior Championships 2022 in the girls section. The event is taking place in Sardinia, Italy from the 11th to 23rd of October 2022. Something quite unfortunate happened with her. After winning her sixth round game and reaching a score of 5.0/6, Priyanka's result against her opponent was overturned and she was expelled from the tournament. What happened? Read the report below to find out. We have the statement by FIDE, the coaches of Indian delegation in Italy and Priyanka herself.

Priyanka Nutakki started as the 8th seed at the World Junior Chess Championship 2022 Girls. She started off with two wins, then two draws and then a win, taking her score tally to 4.0/5. These were the standings after round 5:

Priyanka was pitted against the strong Govhar Beydullayeva from Azerbaijan in the sixth round.

Priyanka Nutakki is a WGM and one of the top junior girls in the country | Photo: Przemyslaw Nikiel | European Chess TV

Priyanka opened the game with 1.d4 and Beydullayeva got a comfortable position out of the opening. It was a complex game where the Azeri girl sacrificed an exchange incorrectly to give White a decisive advantage. Priyanka played the next phase of the game very well and finished off the game with some nice tactical ideas.

After the game ended, there was a fair play check that took place and earbuds were found in the jacket pocket of Priyanka. The result of the game was overturned and Priyanka was disqualified from the tournament. Below you have the statement from FIDE, the coaches of the Indian team and Priyanka herself. The statement of FIDE mentions that there was no indication of foul play, but based on the fair play policies, Priyanka was expelled from the tournament.

The official report from FIDE:

"An unfortunate incident occurred towards the end of the 6th round of the Girls World Junior Championship in Sardinia. During a routine check, one of the players, Priyanka Nutakki, was found to have a pair of earbuds in her jacket pocket. While there is no indication of foul play on her part, earbuds are strictly forbidden at the playing hall. Carrying these devices during a game is a violation of fair play policies, and it is penalized with the loss of the game and expulsion from the tournament. The point scored by Nutakki in the 6th round has been awarded to her rival, Govhar Beydullayeva. The Indian delegation filed an appeal, but the Appeals Committee reconfirmed the decision."

Statement by Indian coaches at the venue:

"In Round 6 of World Juniors, Priyanka Nutakki kept the earbuds in her jacket. She forgot to remove them before coming to the tournament hall. Hence she was removed from the tournament. As mentioned in FIDE report, there was no indication of foul play. However, the decision was that she cannot be a part of the tournament anymore. It's a very unfortunate incident but we respect the decision and agree that everyone has to abide by the rules. - Swayams Mishra & Kavitha J E (coaches of India in World Junior Chess Championship 2022)"

"I went for a walk in the morning and took my earbuds and left them in the jacket. I subconsciously took the same jacket to the tournament hall completely forgetting the fact that I put earbuds in them. I only realised when the random check happened. I would want to mention a few things here:

2 Since I was playing on board 2, my board was completely under video surveillance all the time.

3. Transmission of the game is delayed by 15 mins.

The whole time I didn't realise that the jacket I was carrying had earbuds in it. I did only realise this during the random security check post the game. This was an unfortunate and unintentional mistake from my side but I abide by the fact that carrying electronic devices like earbuds and watches are not allowed inside the hall. I am glad and obliged that FIDE has mentioned in the report that "no indication of foul play was found.

As per the rules I won't be allowed to play in this tournament and I respect this decision. However I sincerely want to apologise to my family, my coach, my federation, my friends and my supporters for this honest mistake from my side. There's no denial that I am upset however I don't want this one incident to define me. I assure to work hard and come back stronger." 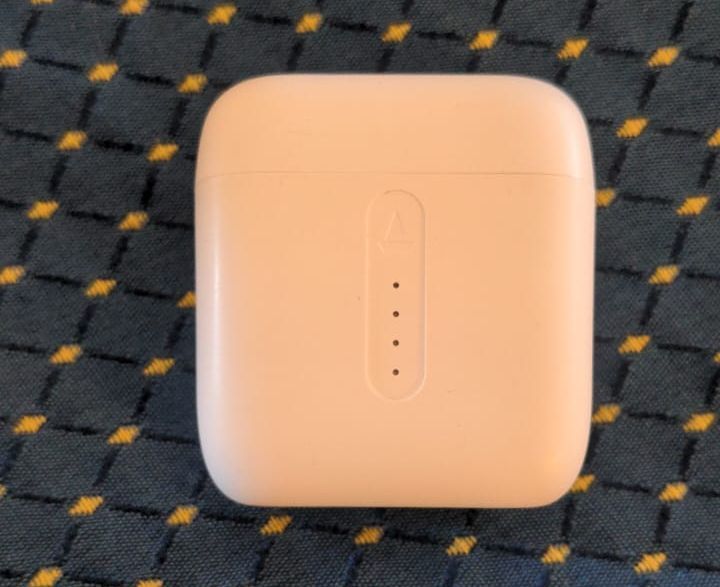 The earbud case that Priyanka was carrying
Related news: