'Off the Board Tales' is a series by ChessBase India, where the premise revolves around people who are passionate about chess despite it not being their career. An emotional and short story is what you're up for, so read on for tales of joy, tales of aspirations, tales of sorrows, and tales of success. Daaim Shabazz is the Associate Professor of Business at Florida A&M University, USA. He began The Chess Drum (thechessdrum.net) in 2001, with the motive to diversify chess in less popular regions. He lives in Tallahassee, Florida. Photos: Daaim Shabazz 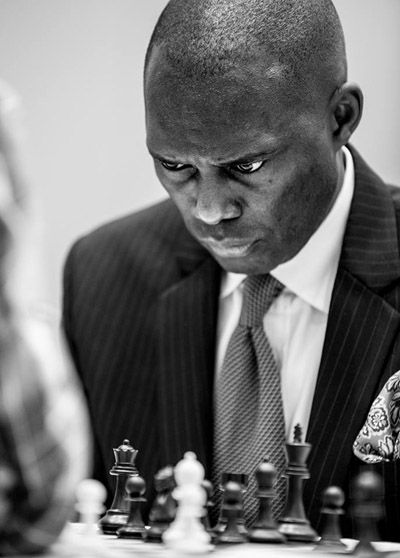 Avathanshu Bhat (AB): What was your childhood like? How did the medical field interest you?

Daaim Shabazz (DS): I lived a normal childhood with both parents and two siblings in Chicago, the third-largest city in the U.S. There were always lots of sports and fun activities, but my parents instilled the importance of reading and math. My first love was baseball which has some similarities to India's passion, cricket. I taught myself to play chess at age 13 after seeing two boys in my neighborhood playing at night. What is remarkable is that you have children who are already Grandmasters at this age. As far as my career path, it was not conventional. I graduated with a degree in computer science and worked as a programmer for a national laboratory. Then I began working in marketing and sales for a computer manufacturer. Before studying for my MBA my life changed when I took my first international trip to Egypt. It was life-changing. From that point on, I wanted to specialize in an international subject. After I earned my MBA in marketing, I entered doctoral studies for International Affairs & Development. It was not a traditional career path, but I have been teaching International Business for 23 years. My Ph.D. dissertation and early area of research were concerning the use of e-Commerce strategies to increase transnational trade.

A cake that was presented to Daaim as a gift during the early days of The Chess Drum.

AB: How did you come up with the idea for The Chess Drum? Was there an inspiration behind it?

DS: It is a long story, but it all started in the late 80s with the question of why there were so few Black players in international chess. I wanted to find out about this community so I began to do some research. While I was doing my MBA, I wrote a marketing plan for a global chess network for Black players. Many years passed and after I finished my doctorate, and in 1998, I took a post at Florida A&M University. In 1999, Maurice Ashley, whom I had met ten years earlier, had earned the Grandmaster title. I knew this was the time to execute my marketing plan. This was the right time to begin a media platform for these types of news stories for the African Diaspora. Chess media had traditionally overlooked Africa, Asian and Hispanic players and it was basically coverage of the top 10 players and top 10 countries, mostly European and American. Of course, Viswanathan Anand became a welcome presence among the elite chess players. In the late 1990s and early 2000s, the Internet was in full bloom, so I decided to start a website instead of toiling with a magazine. It launched in 2001.

With Kenny Solomon of South Africa in Harlem, New York. Solomon would later become a Grandmaster.

AB: What was your motive with The Chess Drum? What were the challenges you faced in the early days?

DS: The idea behind The Chess Drum is to provide Black players will a platform to highlight their accomplishments and at the same time expose them to professional chess. I also feature players from countries that are overlooked. This may include players from Asia, Latin America, and the Middle East. I have interviewed players from every region. The challenges in the early days were many. First, if you are covering events it is difficult to get a timely response on tournament information. Many times the game scores are inaccurate, the photos are not labeled and there are many contextual errors. Since I do the writing, editing, web design, and most of the photography, it becomes labor-intensive. Second, I am a professor, so the time factor is a big constant. I have no staff so it becomes a challenge to keep the quality standards. It is funny that many thought I ran The Chess Drum full-time as a profession. While it is a challenge it would be good to have a stronger network of journalists to help give an appropriate and accurate portrayal of chess.

With Levon Aronian in St. Louis at the 2017 Grand Chess Tour Rapid & Blitz


AB: You began The Chess Drum in 2001, and have witnessed and covered the many crucial events of the Modern Chess Era. What changes do you think have had the biggest effect on chess popularity since then?

DS: It would be easy to say that online chess platforms have had the biggest impact, but let me explain further. The importance of technology is not simply that we can play opponents around the world any time and anywhere. There is a more important point. It is a fact that chess intelligence and know-how have spread around the world and thus, the talent gap has closed. Most countries around the world can boast of FIDE-titled players. Several federations had few titled players 30 years ago but can boast of Grandmasters today. It is with a sense of irony that the current World Champion Magnus Carlsen comes from a small country that did not have a rich chess tradition. Besides rising federations China and India, we have seen singular talents from other unheralded nations such as Cuba, Iran, the Philippines, Kazahkstan, Egypt, and Zambia.

With Gohil Mehul and Kim Bhari in Nairobi, Kenya in 2010.


AB: You pursued chess competitively till your college years, where you took the route of getting a Ph.D. Do you feel that you could have continued chess and taken it to a greater degree, looking back?

DS: One of the most difficult challenges for a talented chess player is to decide whether to put time into chess or devote time developing skills in something else. That is the harsh reality given that it is difficult to dedicate equal time to both and get desired results. I had no such illusions that I would ever be a Grandmaster, but chess helped train my mind to deal with the rigors of academia. I had modest success as a junior player, but in the U.S. there were few opportunities to get norms or to play in FIDE tournaments. In the U.S. the Swiss Opens are the norm. The conditions were not suitable for professional chess. Today, it is a bit better and the U.S. has a wealth of talented youth. In the Black community, chess is used as a platform to advance in other areas. Very few have the resources to dedicate so much time to an activity that does not offer much in the way of financial rewards. In the U.S., chess does not receive full support from the public or the corporate sector. It is respected, but not seen as a worthy social investment. Perhaps this is why the U.S. has never hosted a Chess Olympiad, despite tremendous resources and capacity.

AB: What are your future ambitions concerning The Chess Drum? Do you plan to pursue chess ever again?

DS: I play in 1-2 tournaments a year, but I have no goals as far as tournament chess. As far as The Chess Drum is concerned, I would like to establish a video series featuring some of the content from the 20,000 pages I have compiled. Most of the educational content is consumed in video format. Blogs are still relevant, but we have moved the delivery system for chess content onto YouTube, Twitch, and chess servers like chess.com, lichess, and ICC.

With Amruta Mokal and Sagar Shah in Batumi, Georgia


AB: What changes would you like to see in chess in the coming years, similar to how much it has evolved in the last decade?

DS: I would love to see the Olympiad held in diverse places. Most of the Olympiad tournaments have been held in Europe and I believe this is a shortcoming in chess equality. We have to show the universality of chess and one way to do that is to spread the message in different regions. Ironically, one of the best Olympiads in history was held in the United Arab Emirates in 1986. Fortunately, China and India have begun to make inroads to the top in the past 30 years, and in 2014 both won medals at the Olympiad. In addition, players like Bassem Amin of Egypt, Firoujz Alirezi of Iran, and Wesley So of the Philippines have shown that top talent can emerge from nations not traditionally known as chess powers. As far as Africa is concerned, there is tremendous talent, but few resources to develop the talent. There needs to be more of an effort of FIDE to build marketing relationships with corporate entities around the world. Under the Kirsan Ilyumzhinov administration, many tournaments were financed from the President's own funds. This is not sustainable. The current administration under Arkady Dvorkovich has some goals to give chess a more diverse platform and it is a positive sign.

In my youth, I was involved in sports such as baseball and soccer. Then chess and cycling began to dominate. Later in life, I trained in a martial art called "capoeira, but due to injuries, I stick to cycling and some yoga. One of my favorite pastimes has been writing which I took up at an early age. It is this gift that I received and one that I share with those who read my articles. I hope all of the readers have enjoyed reading and after 20 years, The Chess Drum is still keeping the beat!

Visit The Chess Drum at www.thechessdrum.net