It has been action-packed last few weeks for Indian Chess. First it was Sandipan Chanda's dominating performance in Leiden Open, then Vidit's scintillating win in Biel and Praggnanandhaa's unbeaten streak in Xtracon. The breakthroughs only get better and bigger as today Surya Sekhar Ganguly wins the super strong Belt and Road Hunan International Open, bagging home the first prize of a whopping 50,000 US Dollar! How big exactly is this amount? Well, just to put things into perspective, this is even more than what Maxime Vachier-Lagrave recently won (US $37,500) by securing first place at the Paris Grand Chess Tour 2019! Finishing ahead of six strong 2700+ Grandmasters with a score of 7.0/9, this is certainly the greatest tournament victory of Ganguly's chess career and arguably one of the greatest in Indian Chess. So how did he do it? We had covered Ganguly's rounds 1-5 in a previous article, in this we explore the champion's journey in last four.

Two of the four players that Surya Shekhar Ganguly had to face in the last four rounds were 2700+ super GMs Bassem Amin and Wang Hao. The other two were the in-form Ivan Cheparinov, who in fact was the leader of the tournament till round six, and the Spanish no.1 Francisco Vallejo Pons. Ganguly's phenomenal score of 3.0/4 against such a stupendous opposition ensured a sparkling 2850+ rating performance and enabled him to gain 27.5 Elo points. After the individual gold in the World Teams 2019, this is the 36-year-old's second power-packed performance this year! India's No.2 Harikrishna Pentala also twitted about this phenomenal achievement. It's very nice to see how chess players in India boost each other, which shows a nice camaraderie building up:

Anish Giri was keen to have another AskSurya!

Speaking to ChessBase India after the win, Ganguly said, " I feel happy to win this strong event. Enjoyed every moment of it despite being physically sick throughout the event." 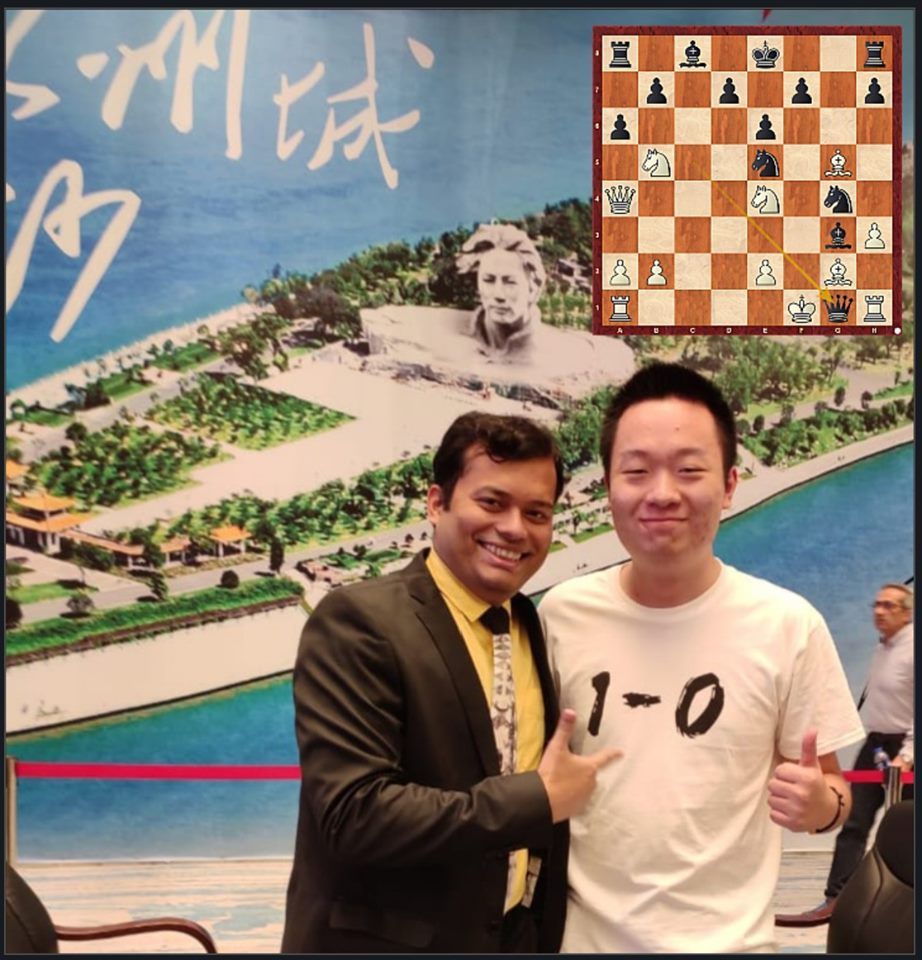 Excellent sense of humour by Wei Yi! For all those who are unaware of the context can check this video out! | Photo: Surya Sekhar Ganguly

Now, let's look into his games from the last four rounds, shall we? An overview of the event in the general from rounds 1 to 5 can be read here.

Round 6: A Valiant Save!

In the sixth round Ganguly was up against the strong Egyptian Grandmaster Bassem Amin. With black pieces, he found quite a passive position out of the opening, which only worsened in the further course but the Bengal Grandmaster unbelievably kept fighting. Sure enough, the effort wasn't in vain! 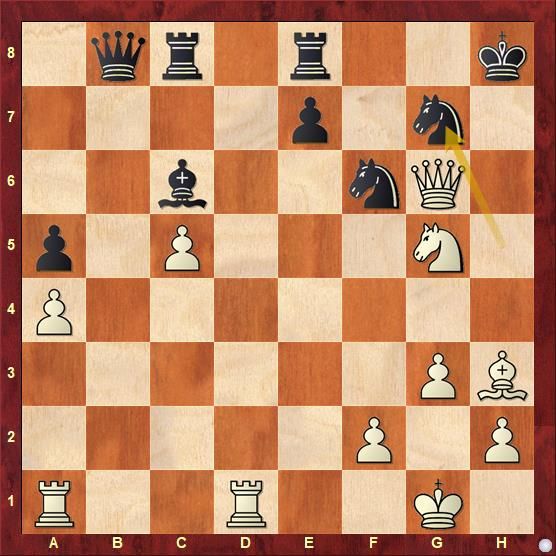 After 35...Ng7 the engines even suggests a mate in 7 moves for White! But shockingly, Bassem kept losing the thread of the attack from this completely winning position. 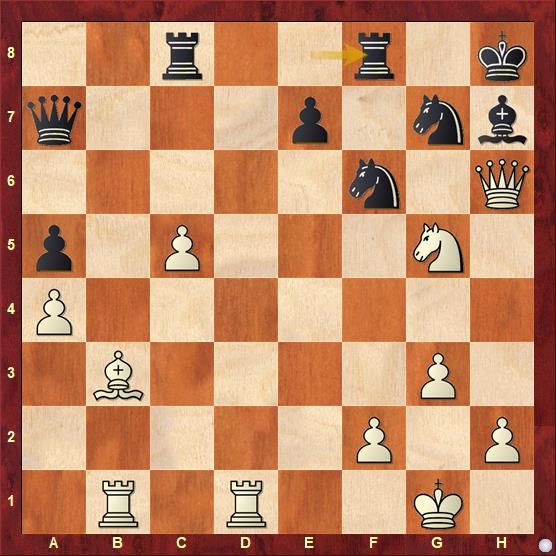 40.Nxh7 was played here and this was the final blunder of the game. After 40...Nxh7 41.Bc2 Nf5 White's initiative completely sublimated! 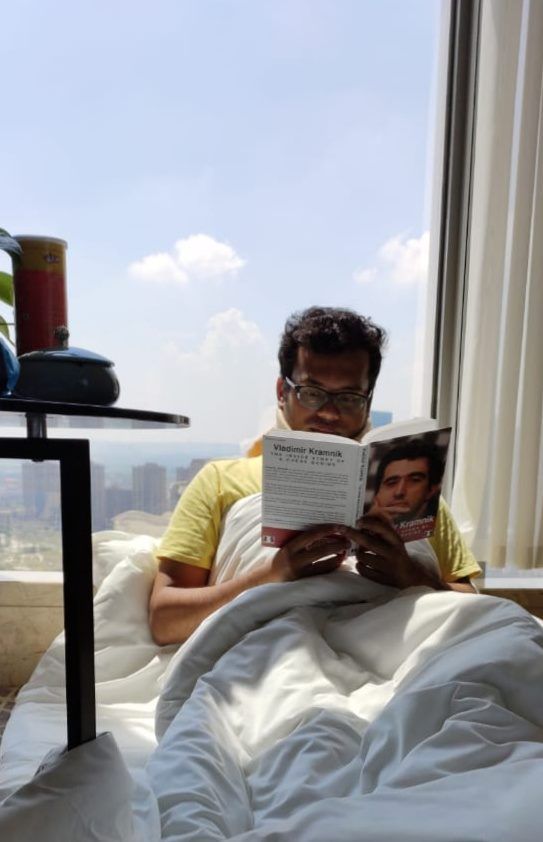 Surya's off the board rituals, helped him to keep his calm over the board, even in such a lost position! | Photo: Surya Sekhar Ganguly

Round 7: Toppling the leader

It was in the seventh round that Ganguly took the sole lead for the first time, beating Ivan Cheparinov, the leader of the event at that point. Playing the White side of an English, he found an advantage as early as move 16. Next, he went on to liquidate into a pawn-up ending and which then was converted with impeccable technique. This was also Ganguly's favourite game from the event. 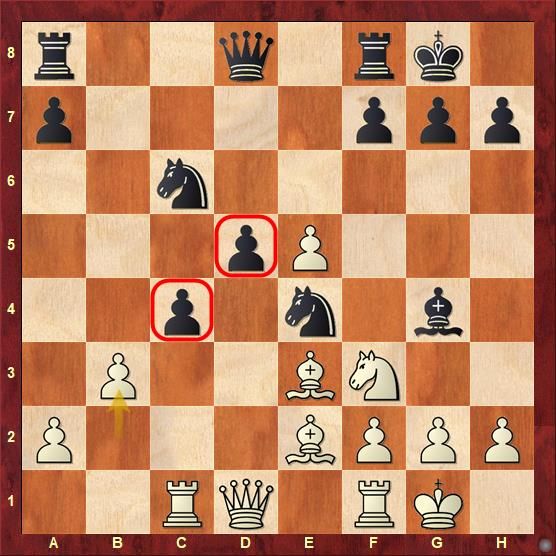 16.b3 was a forceful thrust on the loose d5-c4 structure. After 16...Nb4 17.Bxc4! White simplified things into the following pawn-up ending. 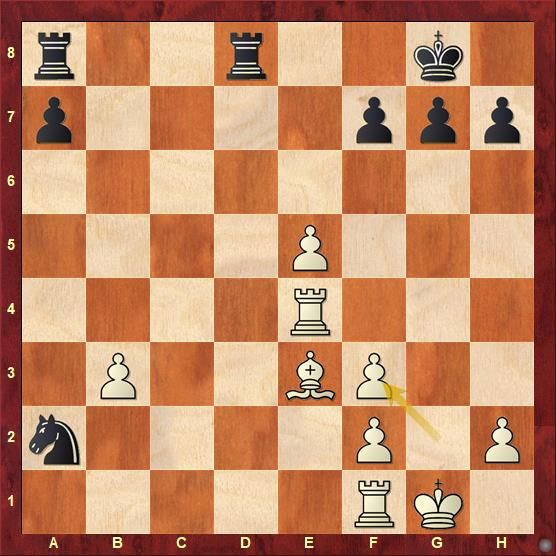 White's kingside pawn structure was ruined but this wasn't really a liability. In fact, White only saves a tempo through this resolving his bank-rank issue. Ganguly went on to register a fine victory from here to emerge as the sole leader of the tournament.

Round 8: Winning the game of nerves!

In the penultimate round of the event against Wang Hao, it was all a game of nerves. The Chinese super-GM and the rating favourite was only half a point behind Ganguly and had every chance at becoming the new sole leader. In such situations of high tension, it is not just about the moves made on board but also the psychology, the mindsets of the players that determine the ultimate result. In the video below IM Sagar Shah explains the nitty gritties of this game in full detail:

And here is the fully annotated game for you to peruse:

Round 9: Coming out strong!

In the final round Ganguly only needed a draw to seal his first spot and therefore he went for a super-solid line with the White pieces against Francisco Vallejo Pons' Sicilian defense. But what started as very quiet soon turned reckless! 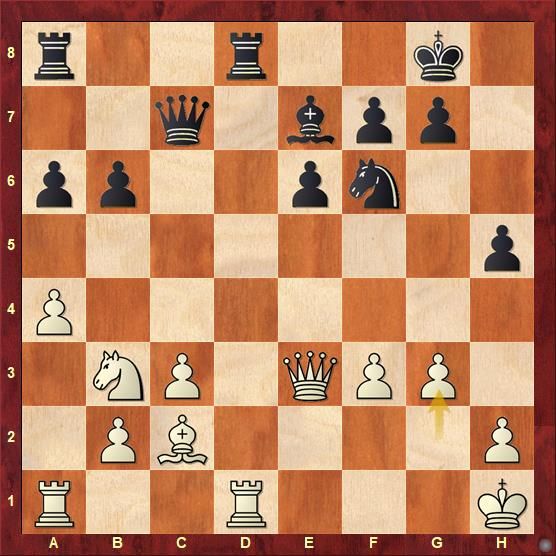 24.g3 was certainly not the most solid choice. In the next few moves, Black was able to rip open White's King and things started to look very precarious. 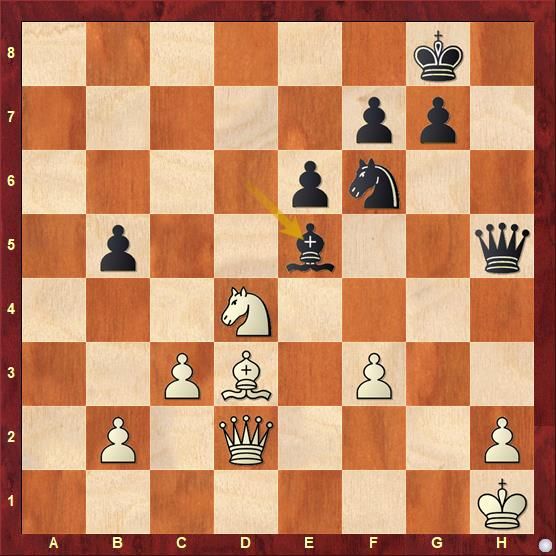 Black was pushing with 33...Be5, but here Vallejo made a poor choice of exchanging off his bishop. 34.Qf2 g6 35.Be2 Bxd4?! was played and this really saved the day for Ganguly and ensured his first place! 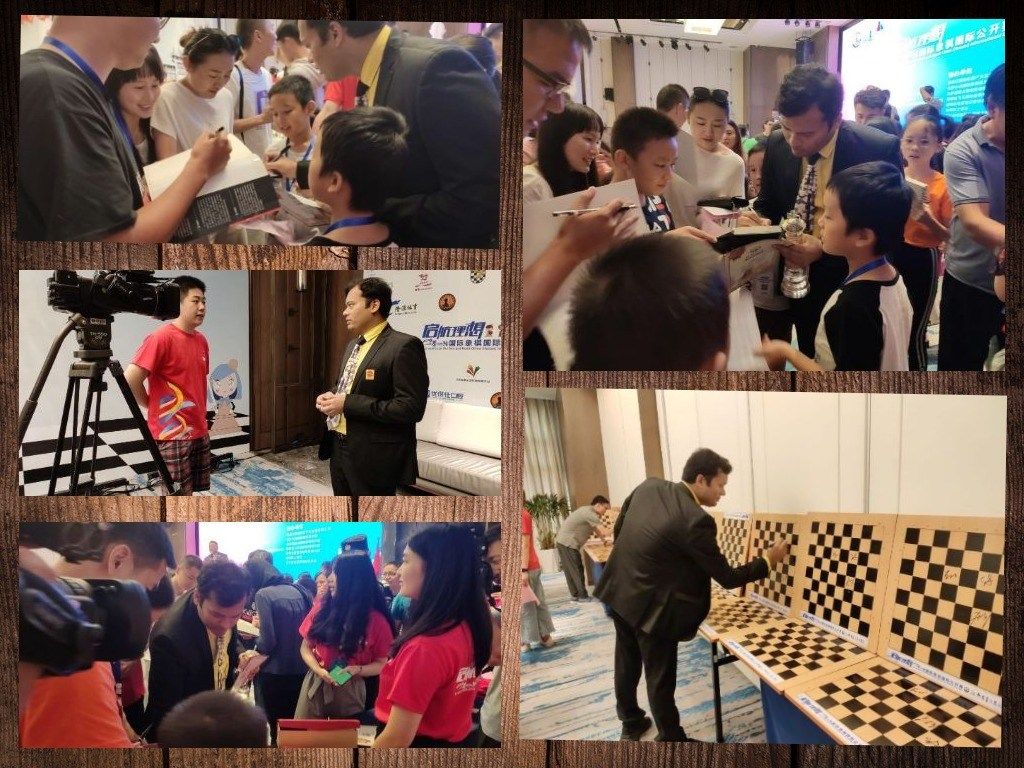 In spite of his bad health, Surya was very kind with his time! | Photo: Surya Sekhar Ganguly 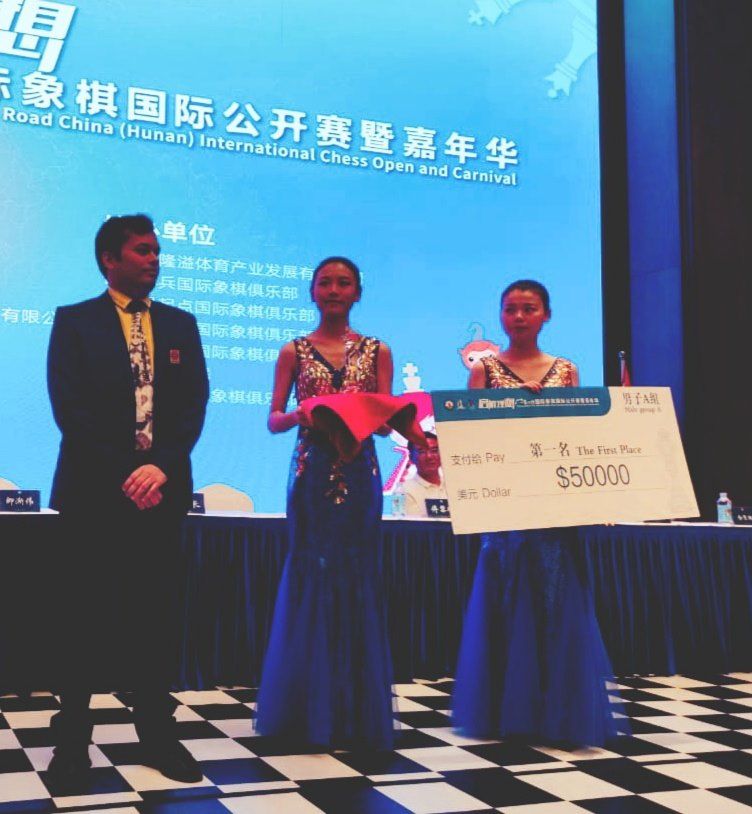 Surya won USD 50,000 (less 20% tax) which effectively comes to USD 40,000. This might well be the second highest prize money amount ever won by an Indian player in a single event after Vishy Anand.| Photo: Surya Sekhar Ganguly 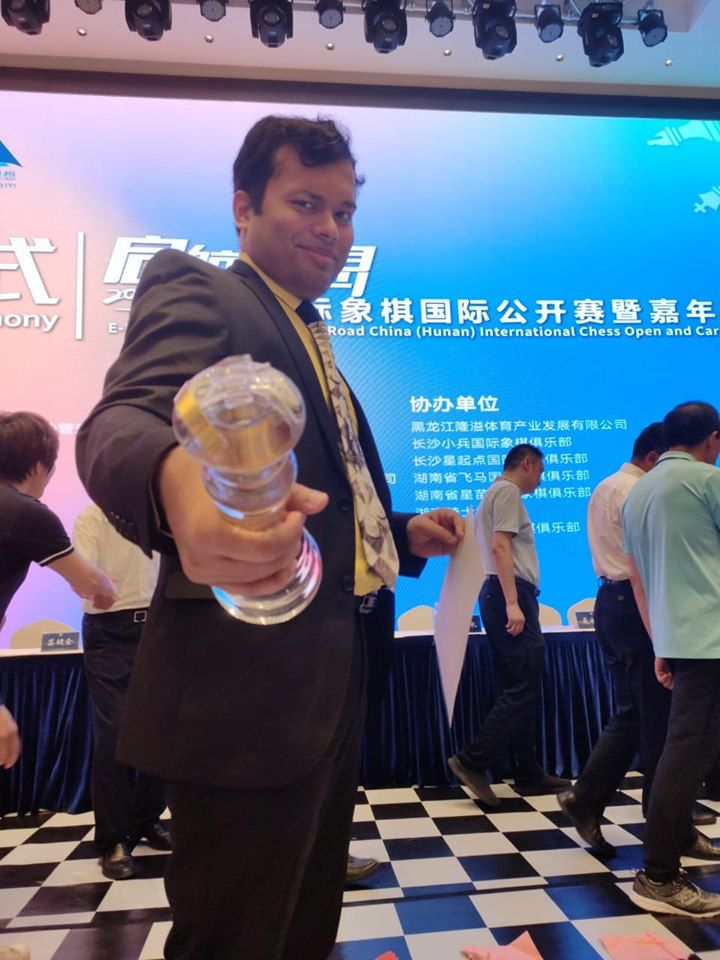 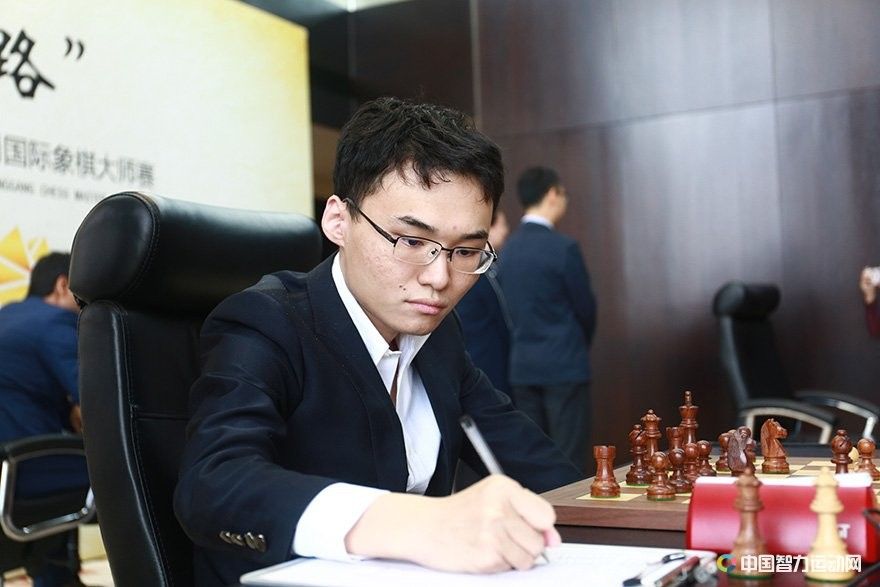 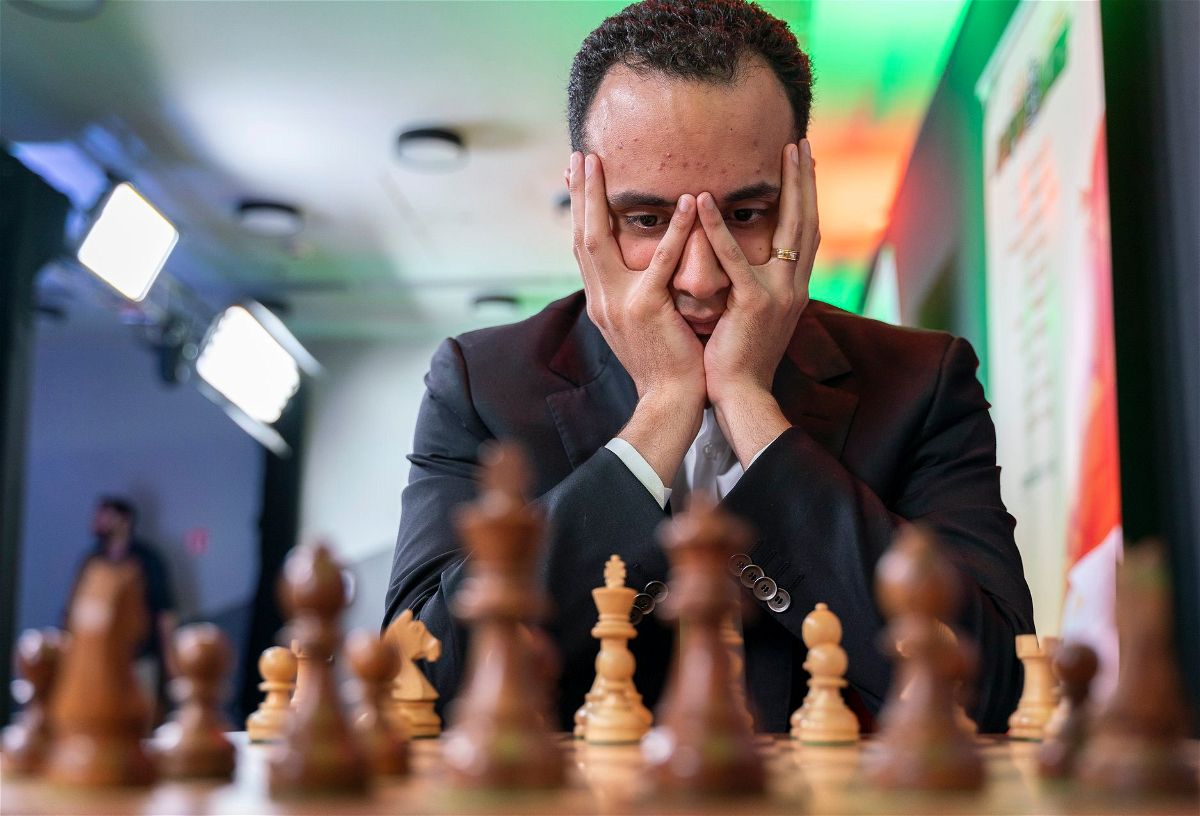 Performance overview of all Indian players

On a parting note, we would like to congratulate the organizers of the Belt and Road International 2019. They are coming up with world class tournaments that is making China one of the major hubs for chess events in the world.