The fourth day of Saint Louis Rapid and Blitz was an interesting one. Carlsen took the sole lead despite not having his best day. He lost to Harikrishna in Round 3, swindled Firouzja in Round 7 and had a close call against Dominguez in Round 8.  Still the World Champion finished at the top of the table with 18.5/27. Previous day leader So made a recovery after starting the day with a loss against Xiong and then finished the day with 18.0/27. Nepomniachtchi beat both Carlsen and Nakamura with 1.b3 and he is at sole third position with 15.0/27. Who do you think will win the entire event - Carlsen, So or someone else? Blitz Round 10 starts tonight from 11:30 p.m. IST. Photo: Saint Louis Chess Club Live stream

Carlsen did not have the best day at the office as he lost to Harikrishna in Round 3, survived a massive scare against Firouzja in Round 7 and gave a chance to Dominguez to walk away with a full point in Round 8. Still Carlsen managed to finish at the top of the first day of Blitz, taking sole lead with 18.5/27. Previous day leader So started the day with a loss against Xiong, however he won the next game and drew the last five games to finish the day with 18.0/27 at the sole second position. Nepomniachtchi beat both Carlsen and Nakamura with 1.b3 and he hopes to continue with it on the final day. He is at sole third position with 15.5/27. Harikrishna is at shared third sixth position with 12.5/27. 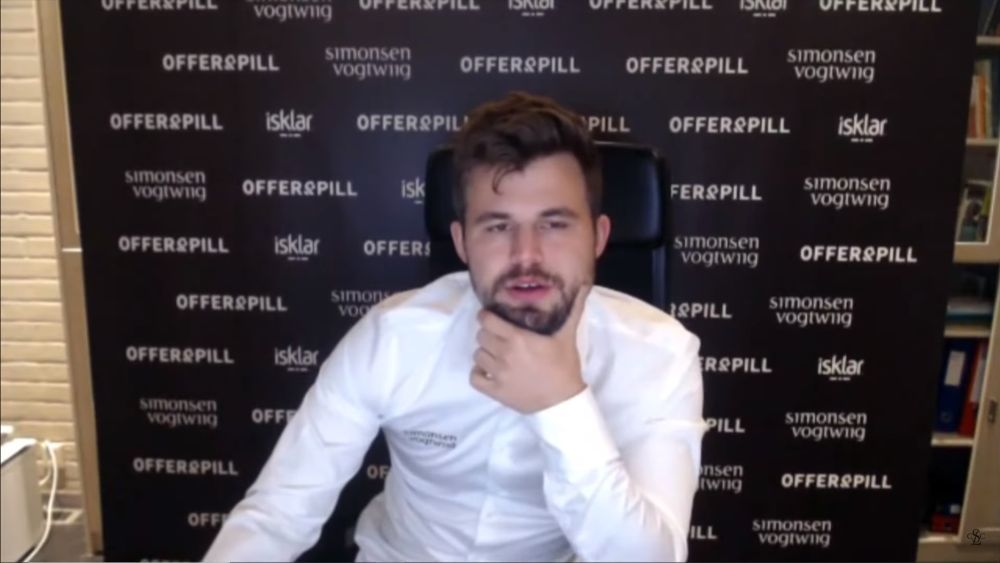 Carlsen made sure he had backups of his internet | Photo: Saint Louis Chess Club Live stream

Round 1: Xiong beat So

Aronian scored a fine victory over Firouzja in King's Indian Defence without castling. 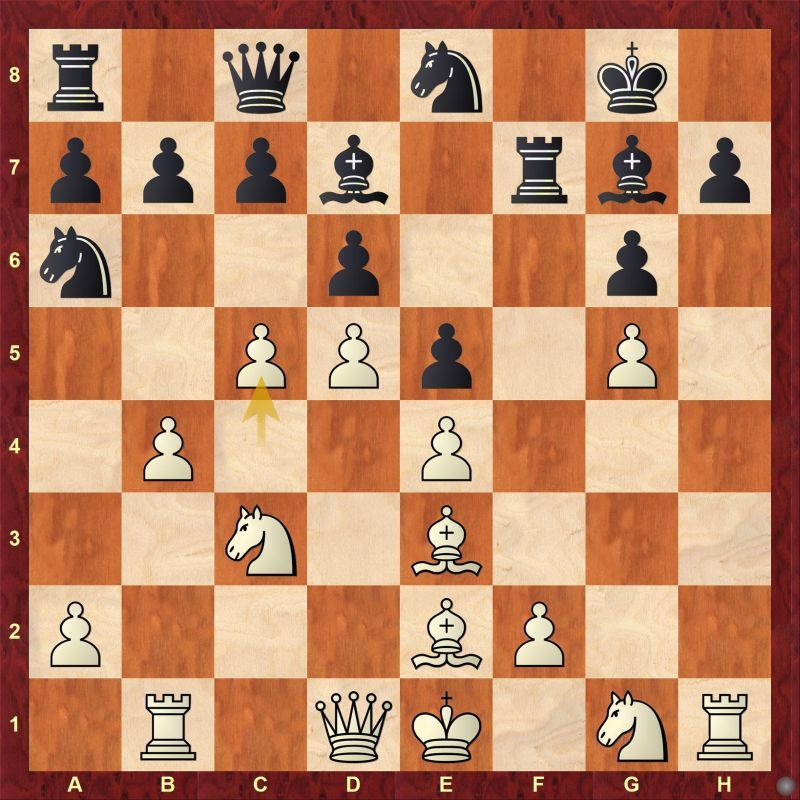 White got a winning position almost out of the opening.

Harikrishna couldn't land any offense and lost to Dominguez.

Xiong scored a fine victory against the tournament leader Wesley So. 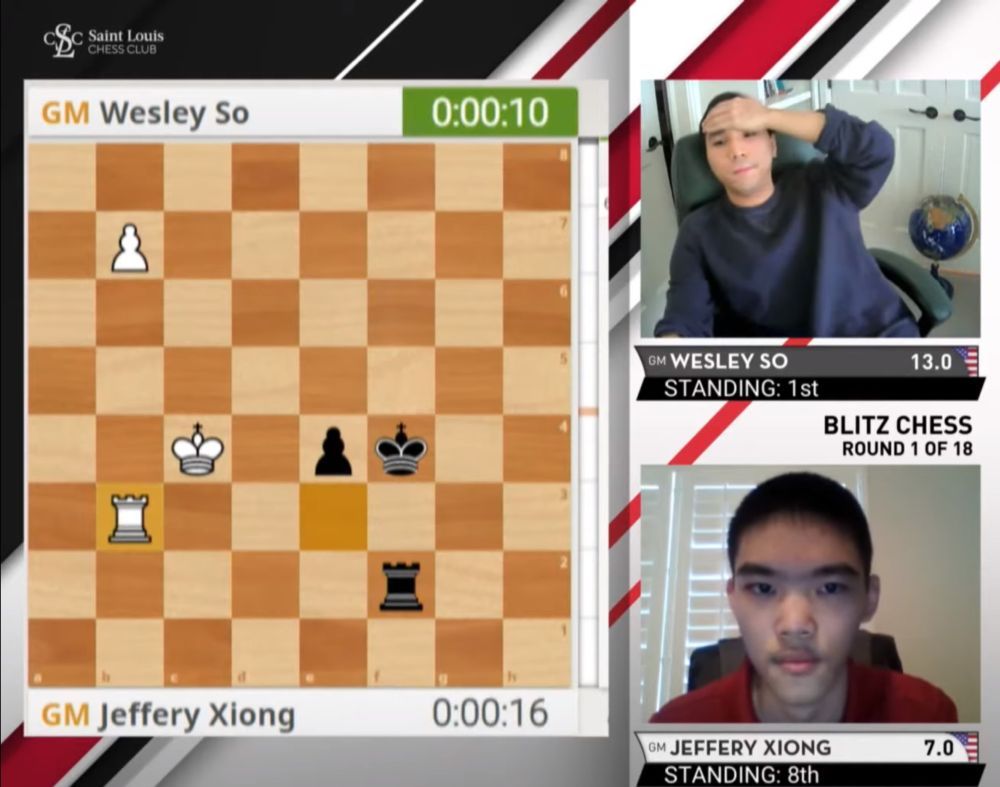 Xiong once again was playing well against Carlsen. In a completely equal position, he fell into a mating net. 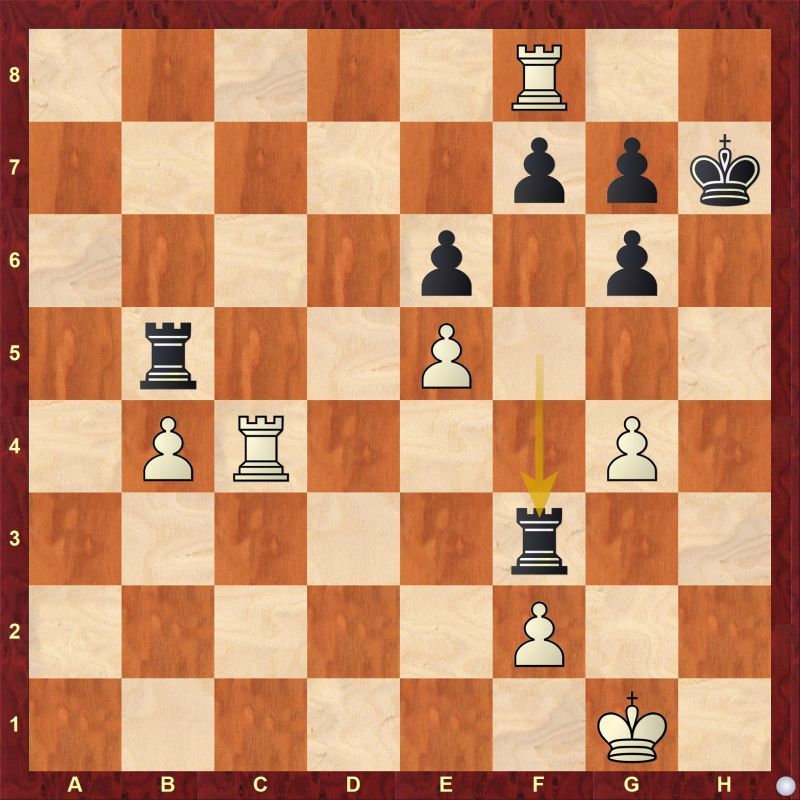 Find out the why 34...Rf3 is a blunder and what black should have played instead. 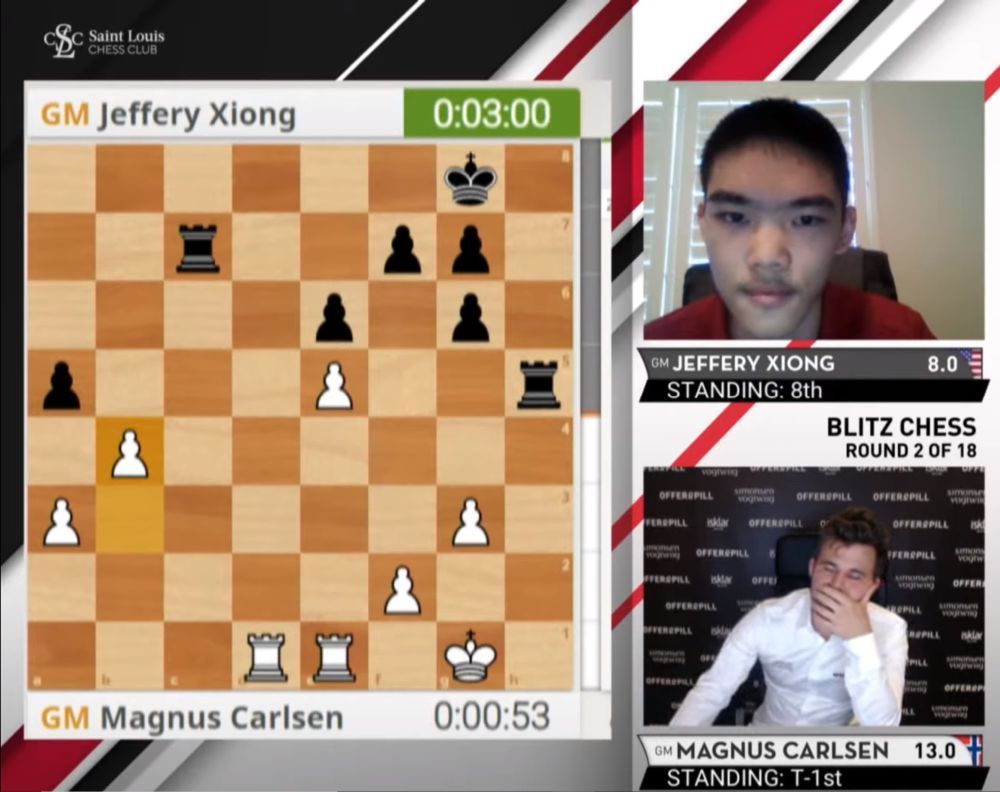 Grischuk blundered in a seemingly equal position against Nakamura and lost the game. 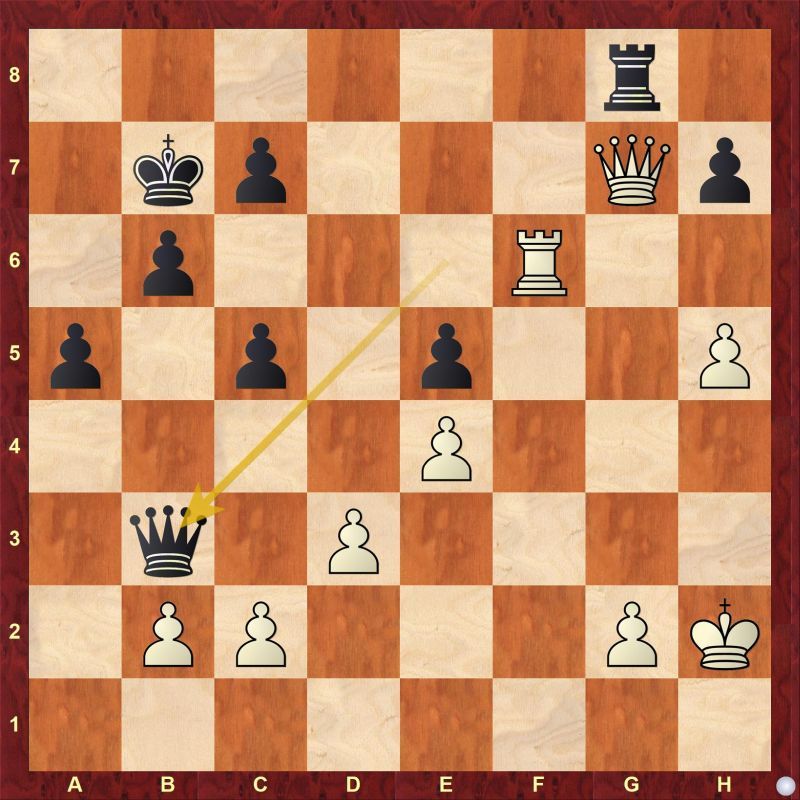 Find out why 42...Qb3 is a blunder and what black should have played instead.

A big win was long overdue for Firouzja and finally it came against Nepomniachtchi. 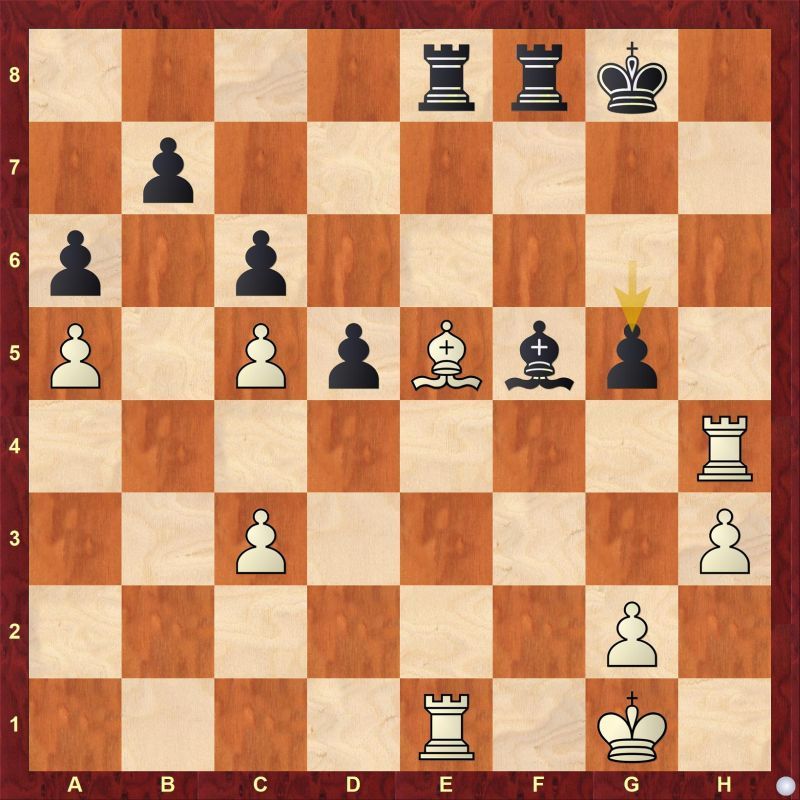 Harikrishna defeated Carlsen using his endgame prowess, an area where Carlsen is also known to be very strong. Once again Harikrishna proved that he definitely should be invited more to the super strong events as he can beat the best of the best. 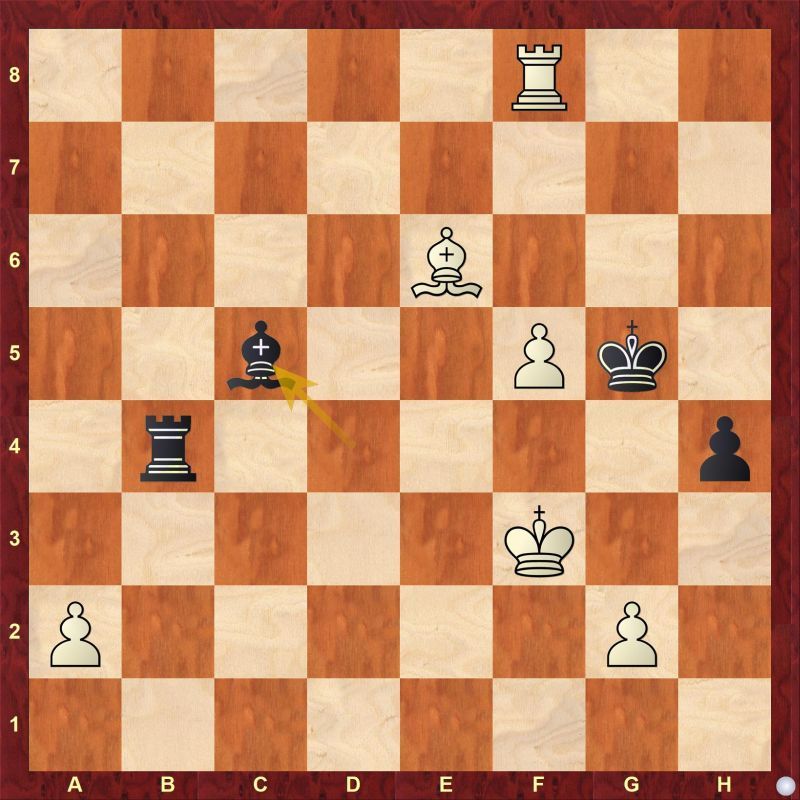 Find out why 49...Bc5 is a mistake and how can white capitalize on it. 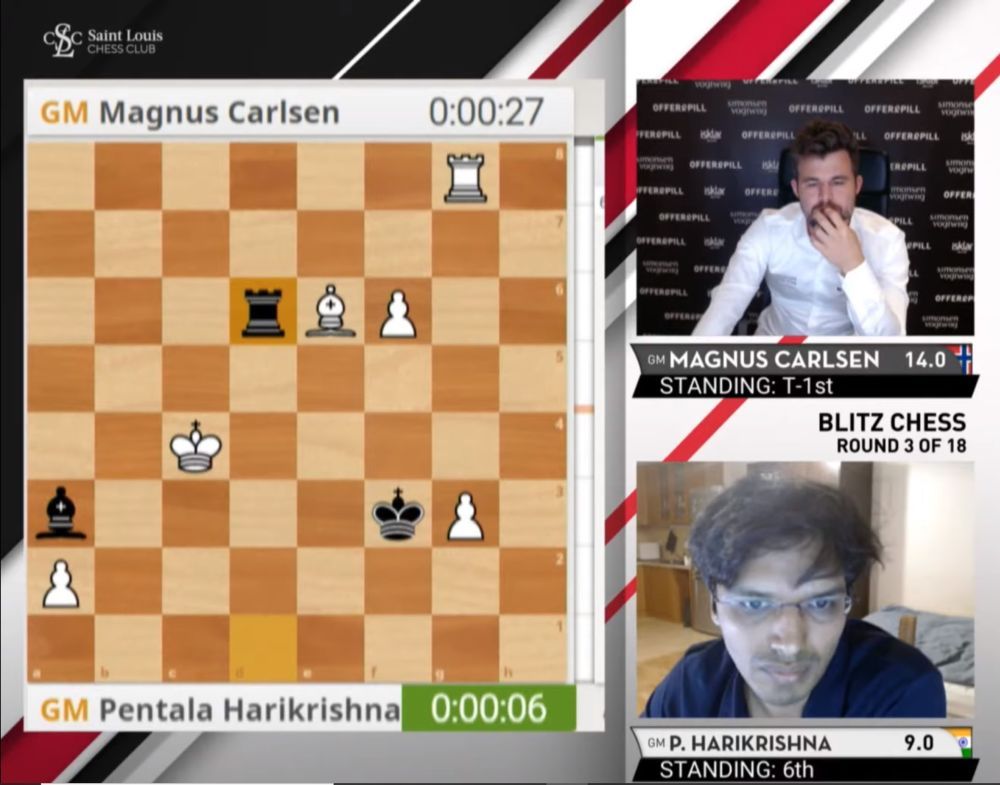 Carlsen tweeted this before the game. One can only wonder if Harikrishna saw it and played 1.e4 instead or it was his plan all along.

Despite losing a piece in the middle game, Aronian fought back and got himself into a winning endgame. 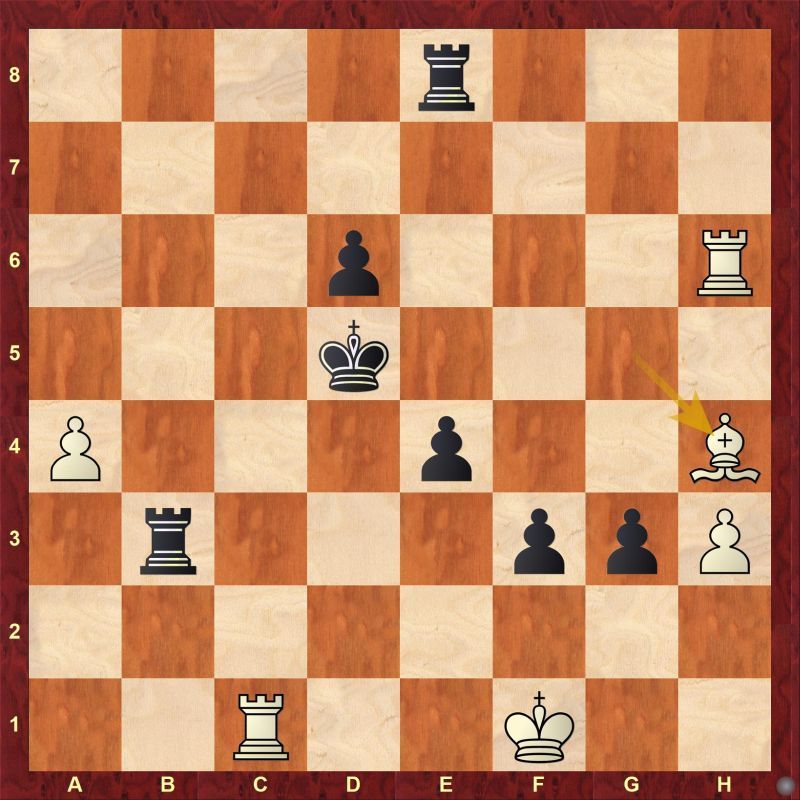 Find out the best continuation for black after 57.Bh4 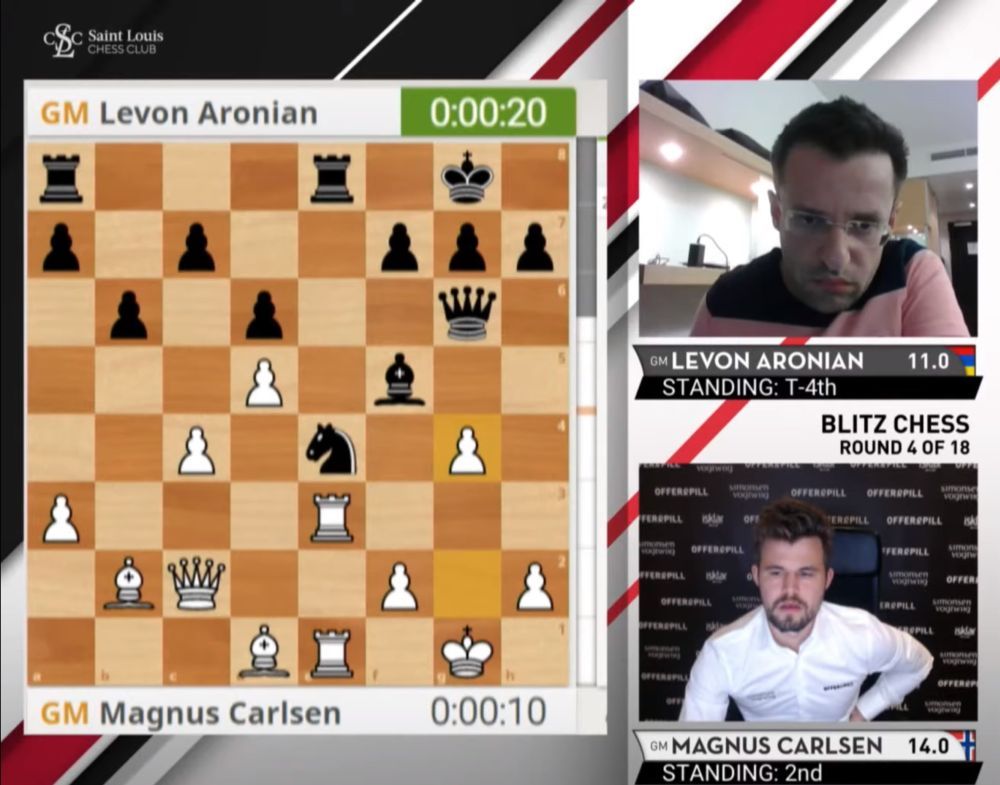 Harikrishna beat Xiong in an 18-move miniature after the latter went for an incorrect exchange of pieces. 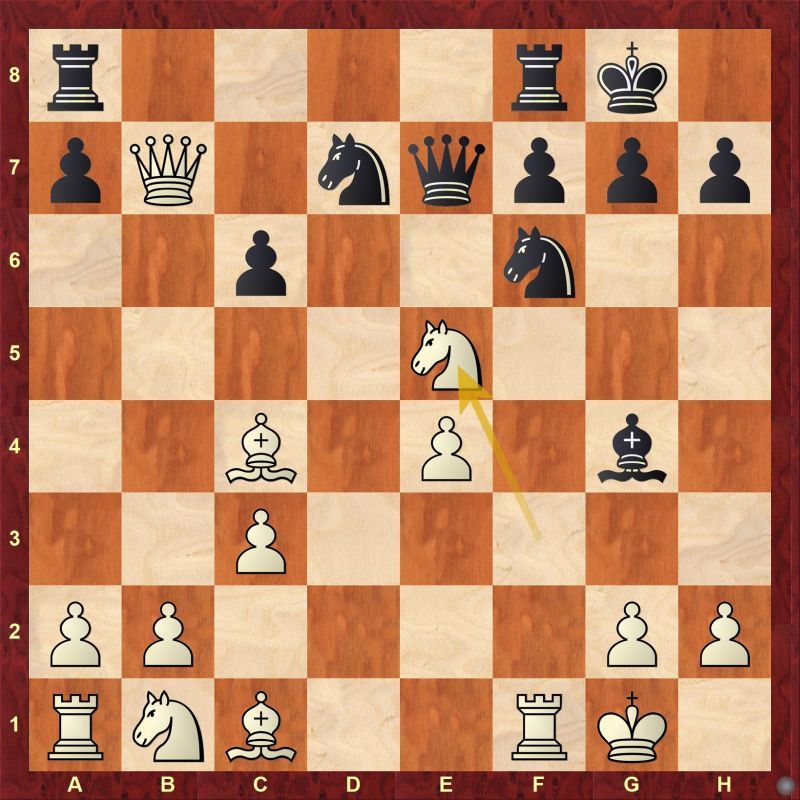 Find out the winning continuation for black after 12.Nxe5

Nepomniachtchi defeated Carlsen after he misplayed and blundered in the endgame. 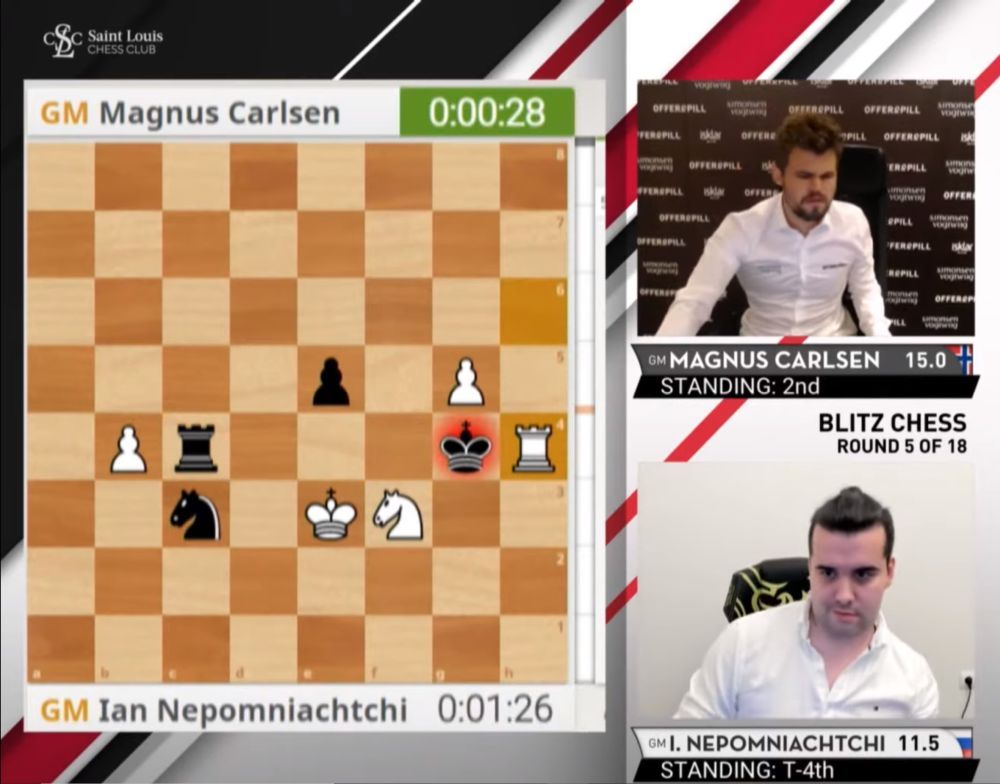 Despite having a completely winning position, Aronian blundered and Xiong walked away with a full point. 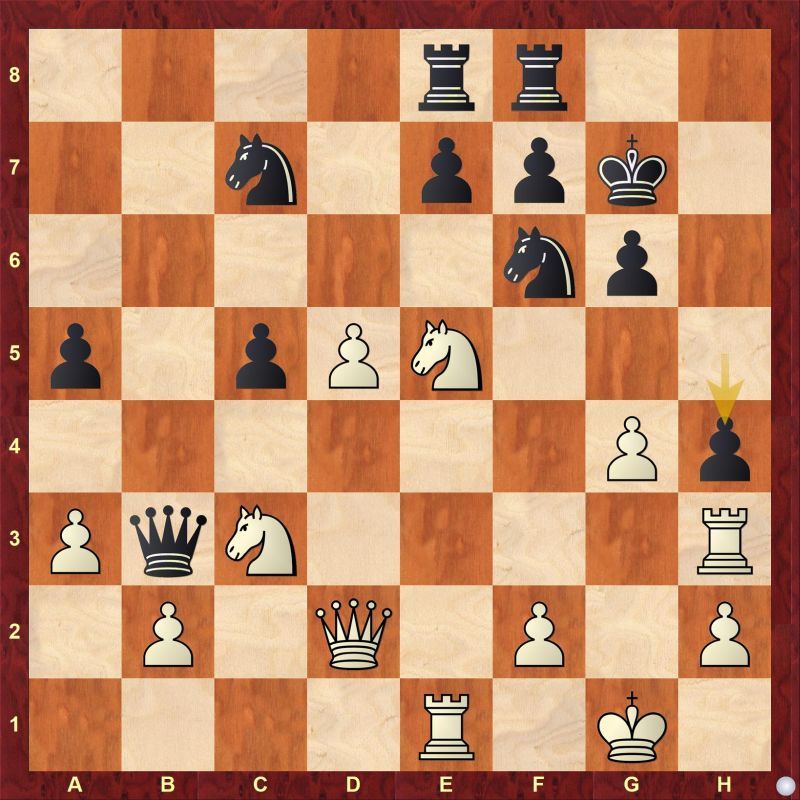 Find out the best continuation for white after 22...h4

Round 6: Carlsen takes his revenge against Grischuk

Carlsen avenged his loss in the last round of the rapid stage. He launched an attack which his opponent Grischuk was unable to defend. 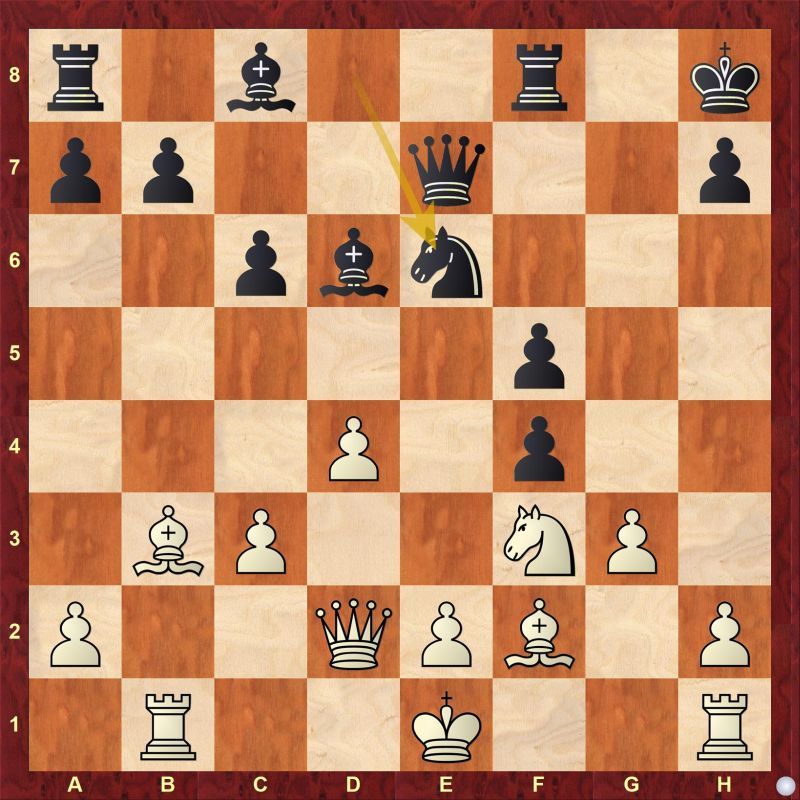 Find out how should white continue the attack here after 19...Ne6 ? 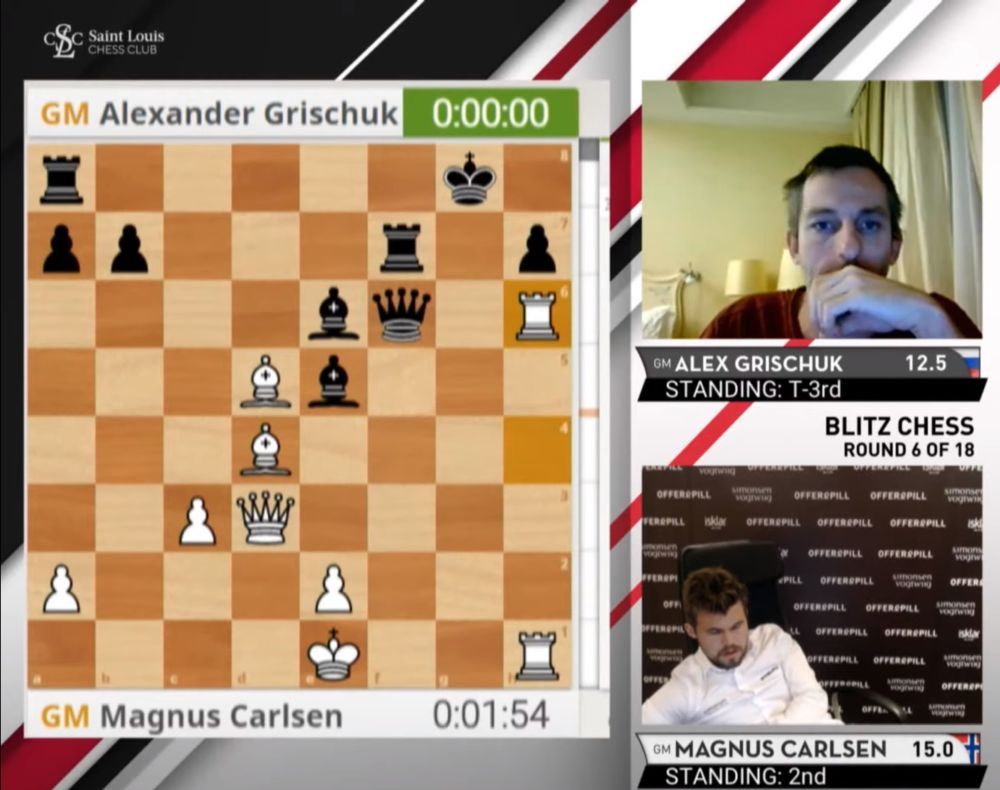 Harikrishna made a long and hard fought draw against Aronian.

Harikrishna was in a grave danger against Nepomniachtchi but the latter went for two rooks for his queen which diminished the attack. 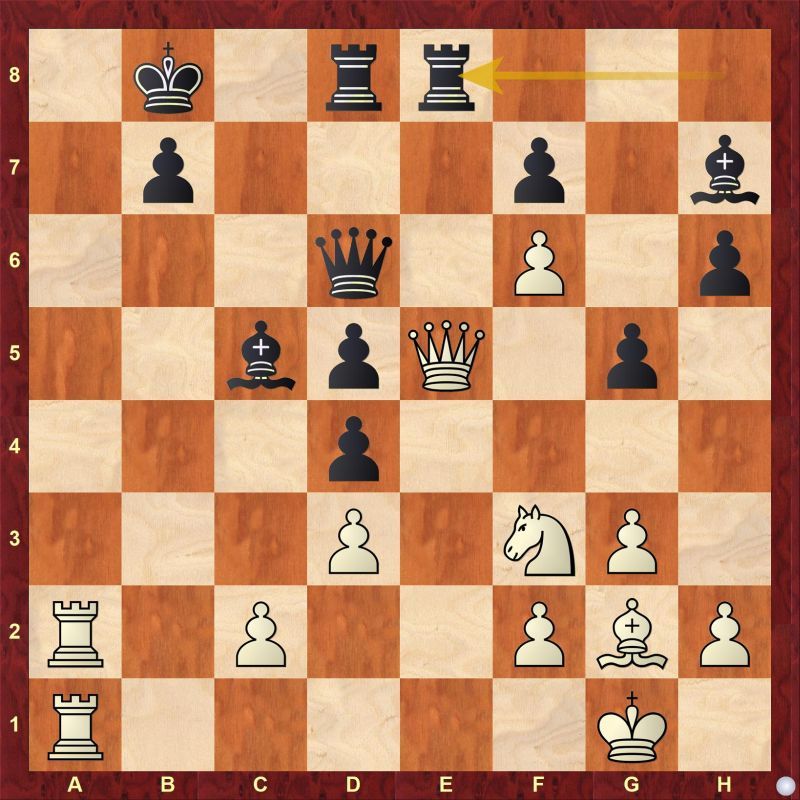 Find out the best variation for white after 28...Rhe8

Carlsen was completely lost in the endgame against Firouzja. Unfortunately for the youngster, he could not capitalize it and the World Champion walked away with another victory. 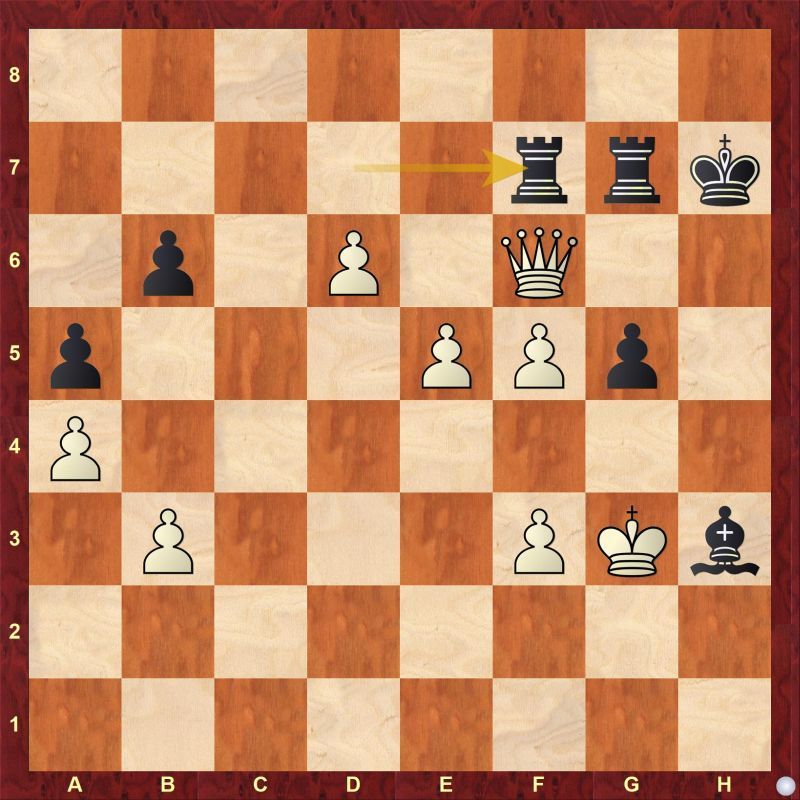 Can you find the winning continuation for white after 51...Rdf7 ? 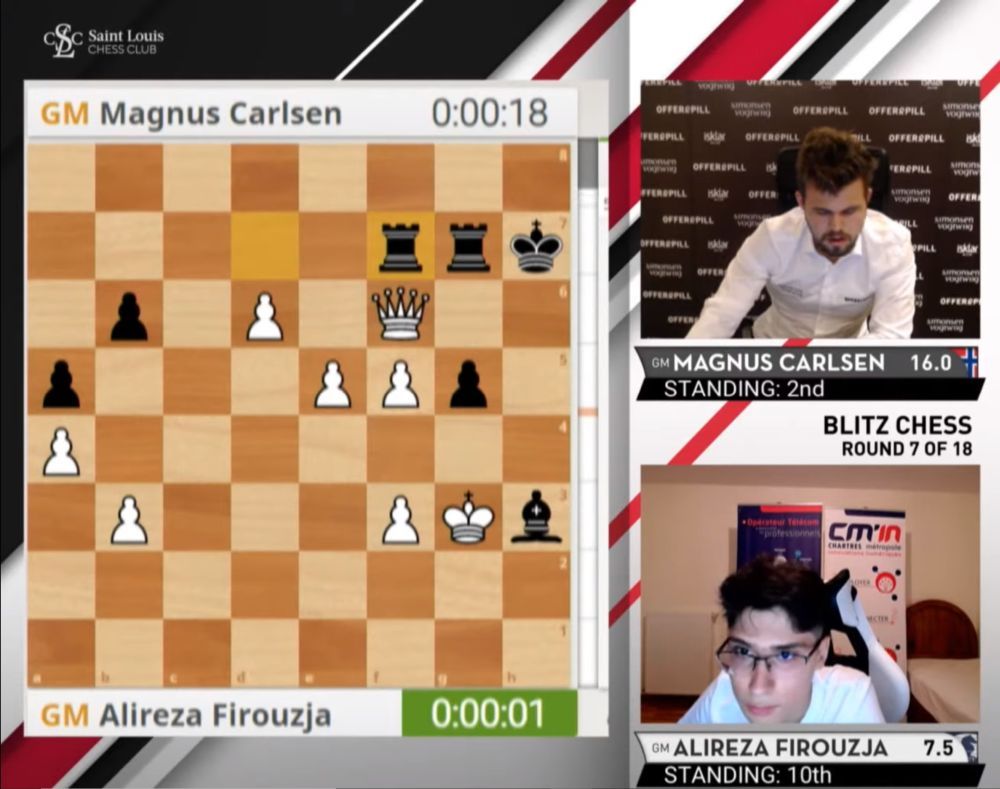 Carlsen's reaction after the game got over

Round 8: Carlsen-Dominguez take a roller-coaster ride 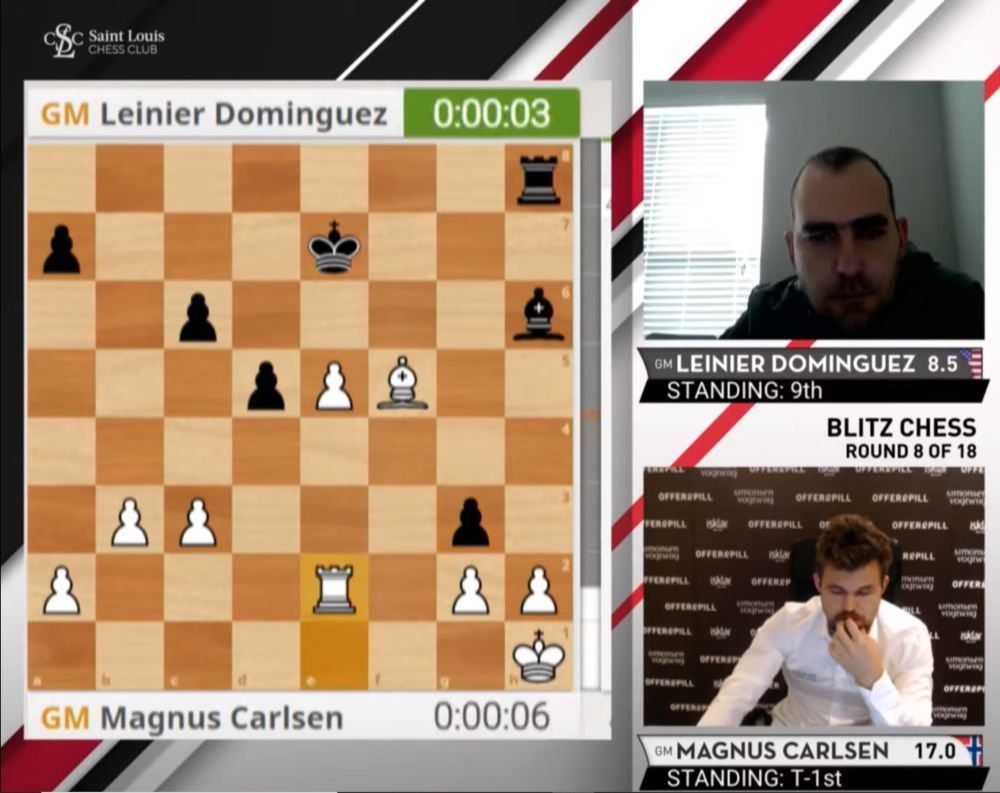 One of the last opportunities Dominguez had after 43.Re2 | Photo: Saint Louis Chess Club Live stream

Nakamura was on his way to convert his advantage until he blundered and allowed Nepomniachtchi to get the initiative. 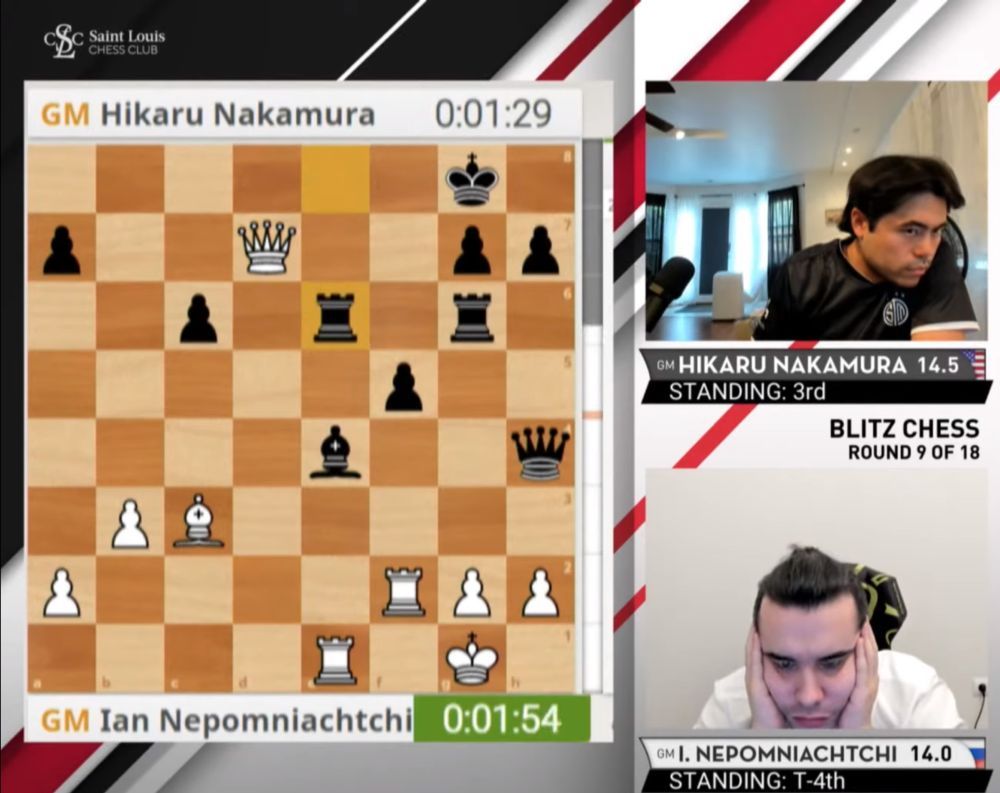 Replay all Blitz Round 1-9 games from Day 4

Carlsen is back at the top, So not far behind | Photo: Saint Louis Chess Club