Only two out of the six tournament leaders were able to maintain their lead after the antepenultimate round of the Reykjavik Open.The two who prevailed were India's Adhiban Baskaran and the tournament's top seed, Richard Rapport. Nihal Sarin also had good chances to pull out yet another sensational win but he failed to find the best continuation and had to settle for a draw. Regardless, the young genius has scored his second Grandmaster norm with this draw and is now only one norm away from the coveted title.

Round 7: Leaders chopped to a third

Only a third of the tournament leaders were able to maintain their lead at the conclusion of the antepenultimate round of the Reykjavik Open. Of the six leaders, who were all pitted against one another, only Adhiban Baskaran and Richard Rapport succeeded in winning their games. While Rapport and Adhiban defeated Alexander Lendermann and Maxime Lagarde, the other two co-leaders, Nihal Sarin and Mustafa Yilmaz drew among each other.

Rapport’s game against Lendermann on the top board was the cleanest win of all. Quite clearly, the American GM was having an off day. The game began with an unusual variant of a Sicilian Defence but eventually began to resemble the pawn structures of the French Defence. Going into the middlegame, Rapport tried to generate initiative on the kingside in his trademark style despite the position reached out of the opening being only slightly better for him at best.  But as play progressed, Lendermann began to crack. 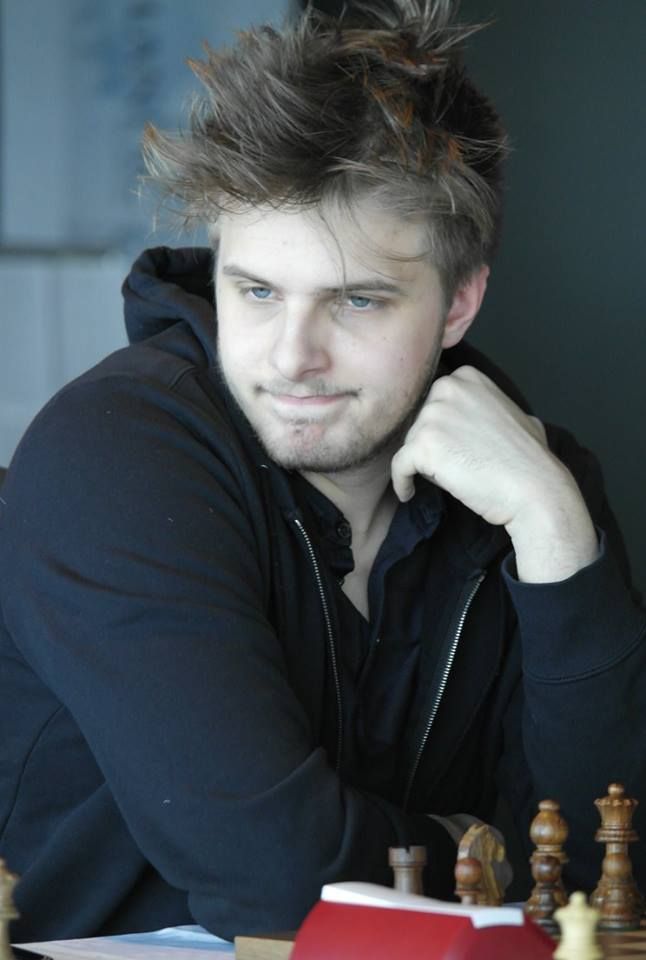 Between moves 22 to 25, the American GM made some poor moves and gave a winning edge to his opponent. More blunders were made in the subsequent moves allowing Rapport to just pounce on the black king with all of his pieces. By the 37th move, Rapport wrapped up the game delivering a checkmate over the board. 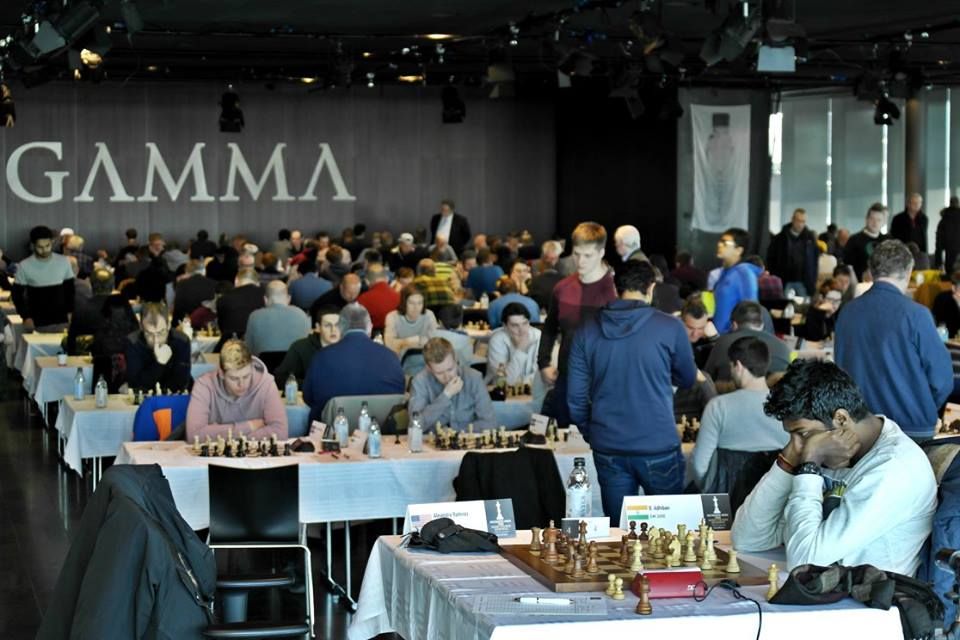 Adhiban Baskaran’s game against Maxime Lagarde was not quite as one-sided. | Photo: Fiona Steil-Antoni

With the black pieces, Adhiban essayed the Caro-Kann Defence which his opponent countered with the Advance Variation. Queens were exchanged very early in the game and neither side really got any advantage out of the opening. Both players fought hard in the middlegame and after a mass exchange of pieces starting on move 21, an equal-looking endgame with same coloured bishops arose.

But just when it seemed that the game was drifting towards a draw, Lagarde made a shocking blunder. On his 39th move, he offered an exchange of bishops that changed the evaluation of the position from dead equal to dead lost for white in just one move. After Adhiban captured the bishop, the Frenchman resigned immediately. 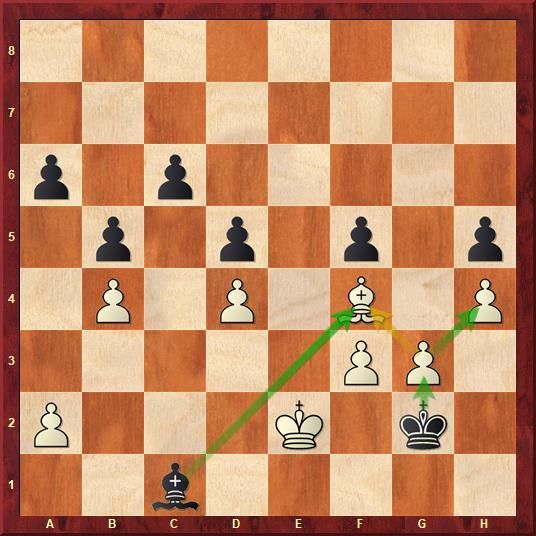 On board three, the encounter between the remaining two co-leaders, Mustafa Yilmaz and Nihal Sarin, kicked off with a Semi-Slav. The position reached out of the opening was objectively equal, however, the 13-year-old from Thrissur tried extremely hard to create some chances. Sacrificing a pawn in the middle game, Sarin generated a strong initiative against his opponent’s king and by around move 25, got a clearly better position. However, in the subsequent moves, Sarin was unable to find the most aggressive continuations and decided to settle for a draw one move after the first time control. 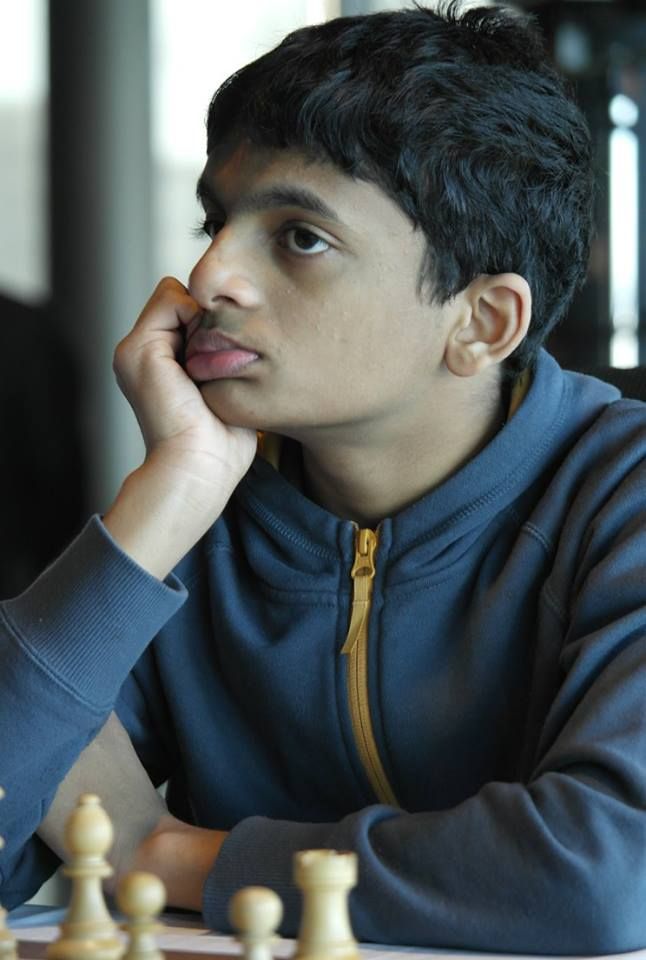 But even though Sarin missed a win in this game, he had a lot to be joyful about | Photo: Fiona Steil-Antoni

After this draw, it was confirmed that Sarin, with his stupendous performance in the first seven rounds, had met the requirement for his second GM norm with two rounds to spare! Generally speaking, pulling off a rating performance of 2600 or higher in itself is quite a difficult feat to accomplish. And to do it with two rounds to spare is simply remarkable. With his unbeaten run in the first seven rounds, Sarin’s rating performance has reached a mind-boggling 2767. A performance of this grade is considered impressive even for seasoned grandmasters and for a 13-year-old, this is just incredible. 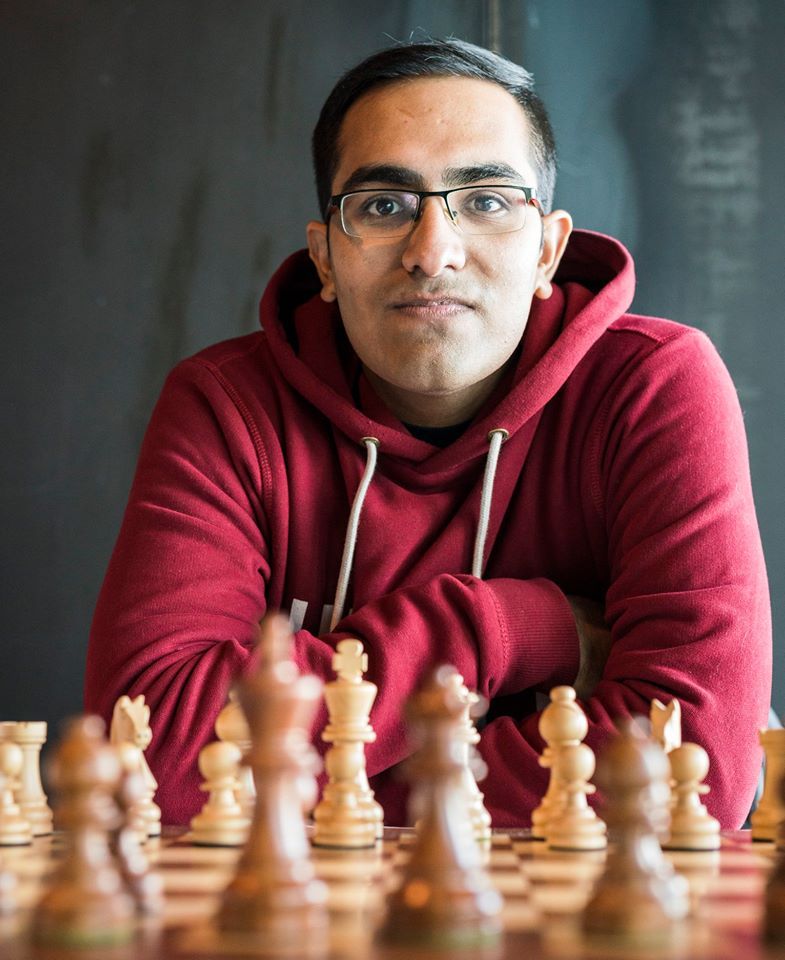 Another Indian GM who inched closer to the top of the leaderboard in round 7 was the Delhi lad, Vaibhav Suri.| Photo: Lennart Ootes

Playing from the white side of a King’s Indian Defence against Gabriel Bick, Suri got a slight edge out of the opening. Suri tried hard to generate play against his opponent’s king but the position remained objectively equal. On his 34th turn, Bick fumbled and this was all that was required for Suri to take over and dominate. Just three moves later, the Indian lashed out with a deadly rook sacrifice that forced immediate resignation.

Suri’s win has put him on the joint second place on the leaderboard. In round eight, he will be playing the little genius who earned a GM norm in this round, Nihal Sarin. But a more important matchup of the next round is the top board clash between the tournament leaders, Adhiban Baskaran and Richard Rapport. Adhiban will have the white pieces in this game and if he could pull out a win, he will have a serious chance to take home the title prize. 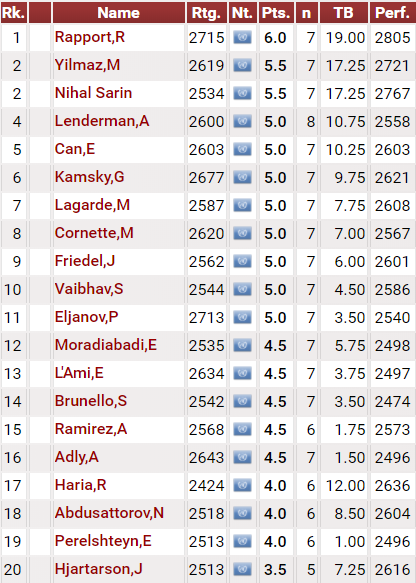