Prithu Gupta becomes the 64th GM of Indian chess at the age of 15 years, 4 months and 10 days

While the story of every grandmaster of Indian chess is different and unique, you wouldn't find a more inspiring tale than that of Prithu Gupta. The youngster from Delhi became the country's 64th GM at the age of 15 years 4 months and 10 days on the 18th of July 2019. Prithu's journey to the GM title has been quite unconventional. The boy has given great importance to his academics and ensured that he maintains a CGPA close to 10. At the same time whenever he has got to play in a chess tournament he has made the most of his opportunities and achieved his GM title. 32 years after Vishy Anand became India's first GM, Prithu has completed the first chess board by becoming the country's 64th grandmaster. Get to know more about this young talent.

The first chess board of Indian chess that began with Vishy Anand on the first square back in 1987 has been completed on 18th of July 2019. Prithu Gupta imprinted his name on the final square of the chess board as the 64th GM of the country! It has been a phenomenal growth for Indian chess in the recent years. We produced eight GMs in 2018 and Prithu is already the sixth GM of the country in 2019. 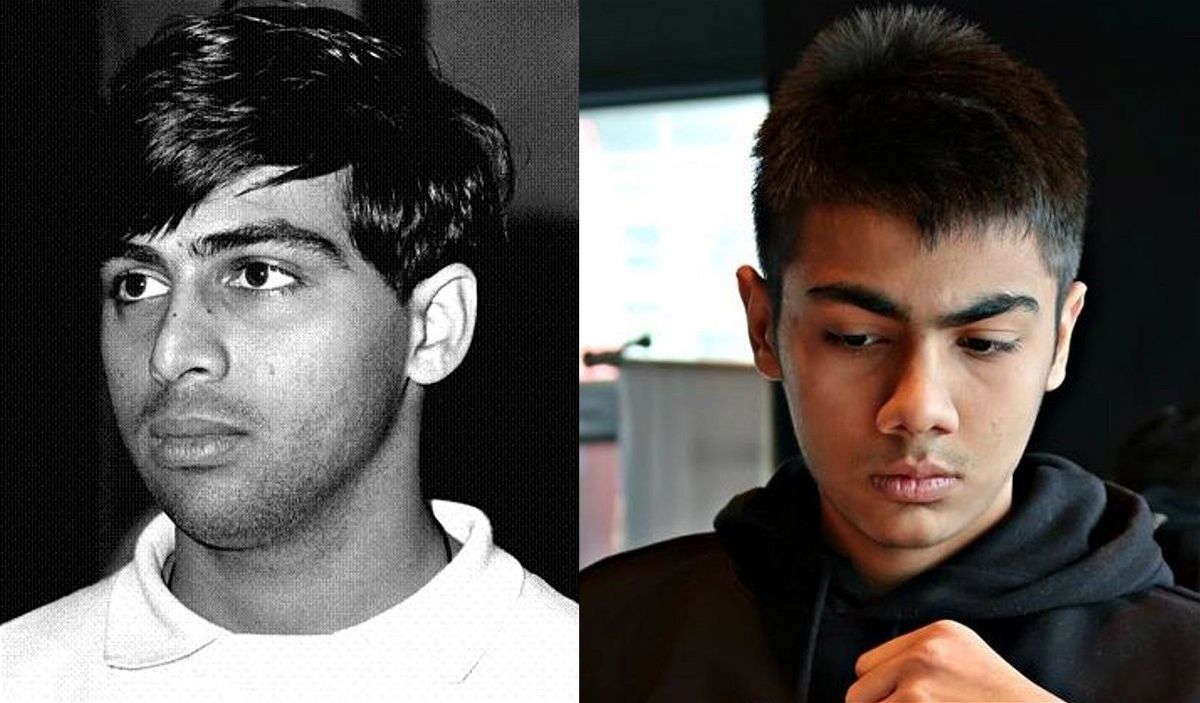 The journey began from Vishy Anand becoming India's first GM in 1987. 32 years later, we have our 64th GM - Prithu Gupta. The first of the many chess boards of Indian chess GMs has been completed!

Born on 8th March 2004, Prithu has achieved this feat of becoming a GM at the tender age of 15 years, 4 months and 10 days old. Prithu achieved his first GM norm at the Gibraltar Masters 2018, the second one at the Biel Masters 2018 and the final one at the Porticcio Open 2019. At the fifth round of the Portugese League 2019, Prithu beat IM Lev Yankelevich and crossed the Elo threshold of 2500.

Prithu's journey from a beginner to GM title

We first covered Prithu back in January 2017. At this point Prithu had a rating of 2229. For a 13-year-old boy, this was a good achievement, but didn't seem like a very special rating. However, an important point to note was that Prithu was not one of those kids who began playing chess at the age of four or five. He started his chess journey when he was nine years old. That's quite late by the current standards. 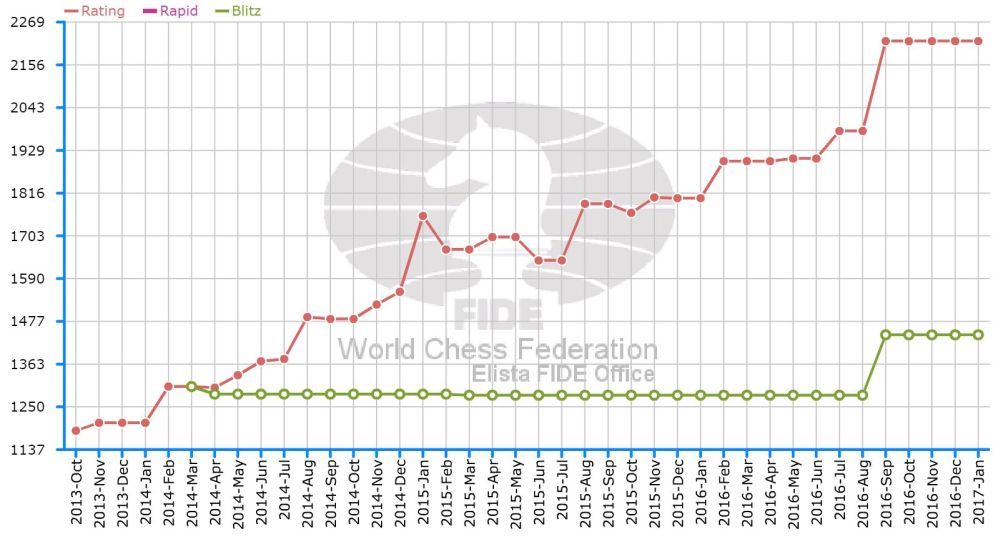 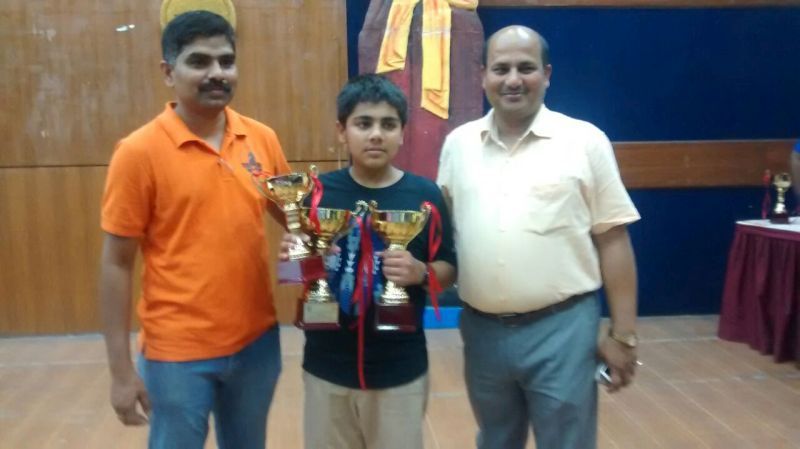 A young Prithu flanked by Gopakumar and A.K. Verma, is holding the Delhi state trophies for 1st runner's up at under-13 and under-15 and 2nd runner's up in the Amateur section.

In recent times we see a trend of youngsters giving up their education and academics in order to pursue their chess career. Prithu has been very particular about balancing his education and chess and has excelled at both of them. Being a student of Modern School, Vasant Vihar, Delhi, he has managed to maintain a CGPA of close to 10 in academics and at the same time achieve the GM title. 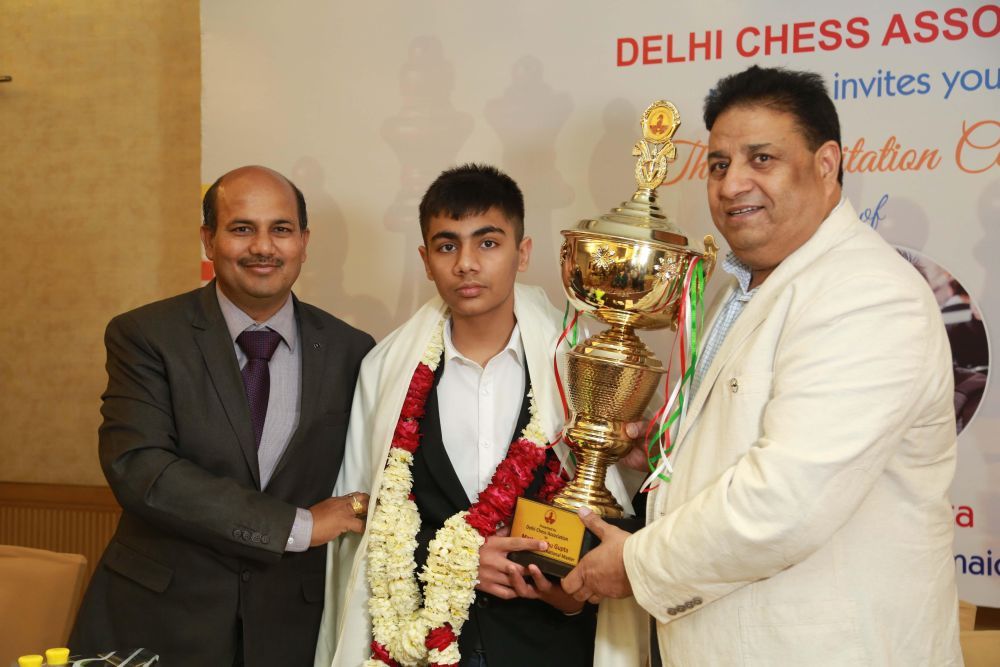 What is quite unbelievable about Prithu's achievement is how he is able to perform at the highest level in spite of not playing many tournaments. In 2018, which was the most crucial year for Prithu's chess, the youngster played in just six tournaments throughout the year - Gibraltar Masters, Llucmajor Open, Portugal Team Championships, Biel Masters, Isle of Man and Montebelluna Cup. In these six tournaments he scored his two GM norms and moved from 2373 to 2462 in terms of rating! After scoring his second GM norm at the Biel Masters 2018, when we asked Prithu about his future plans, he said, "I will be back to my study desk now." Balancing the highest level of performance in chess and academics is never easy, but Prithu has been able to do that. 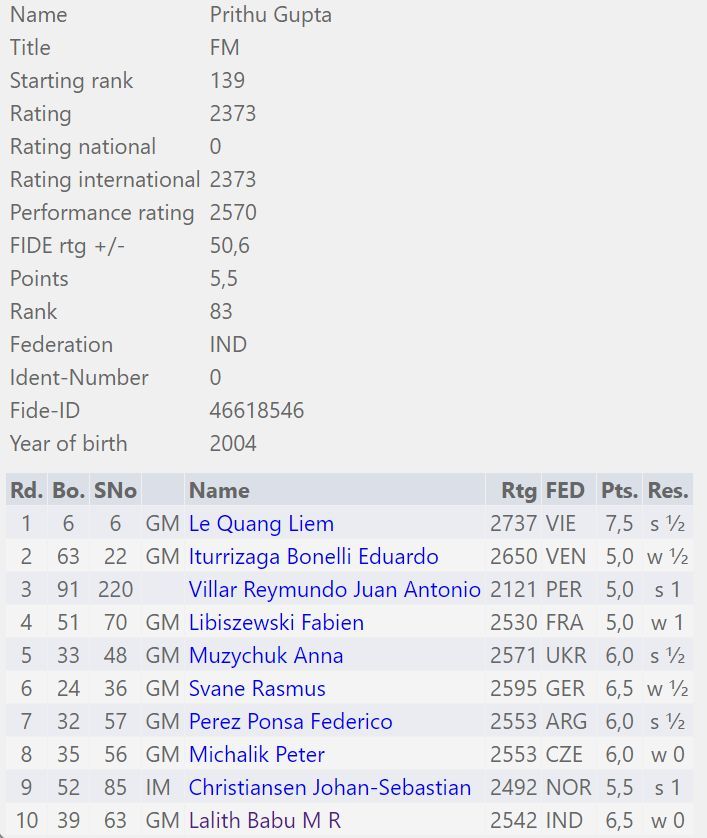 Prithu's first GM norm performance at the Gibraltar Masters 2018. This was the tournament where he also completed his IM title. 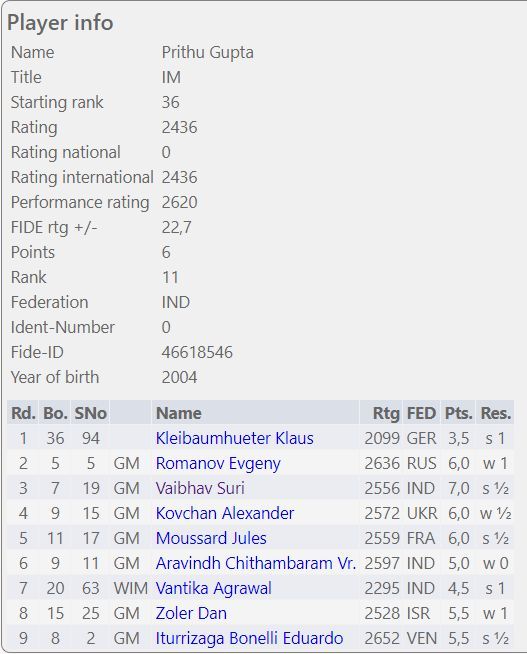 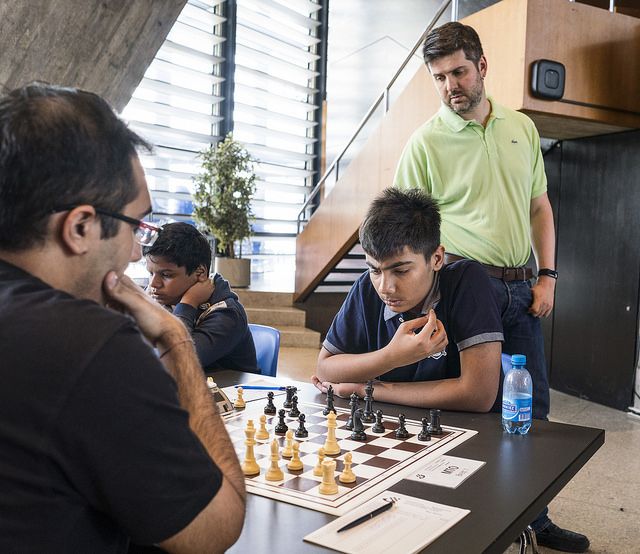 Peter Svilder knows a talent when he sees one! | Photo: Biel Masters 2018

While Prithu's achievement on the chess board is without a doubt amazing, his exploits off the board are also something worth mentioning. In February 2018 when ChessBase India was raising funds for the blind chess players of the country, Prithu Gupta did his bit by contributing his prize money towards the donation drive. Later on he even spent time with one of the members of the blind national team to fine-tune his preparation before the all important world team championships for the blind. All of this just goes to show that the boy is not just a genius on the chess board, but is also a very sensitive and an empathetic individual off it. 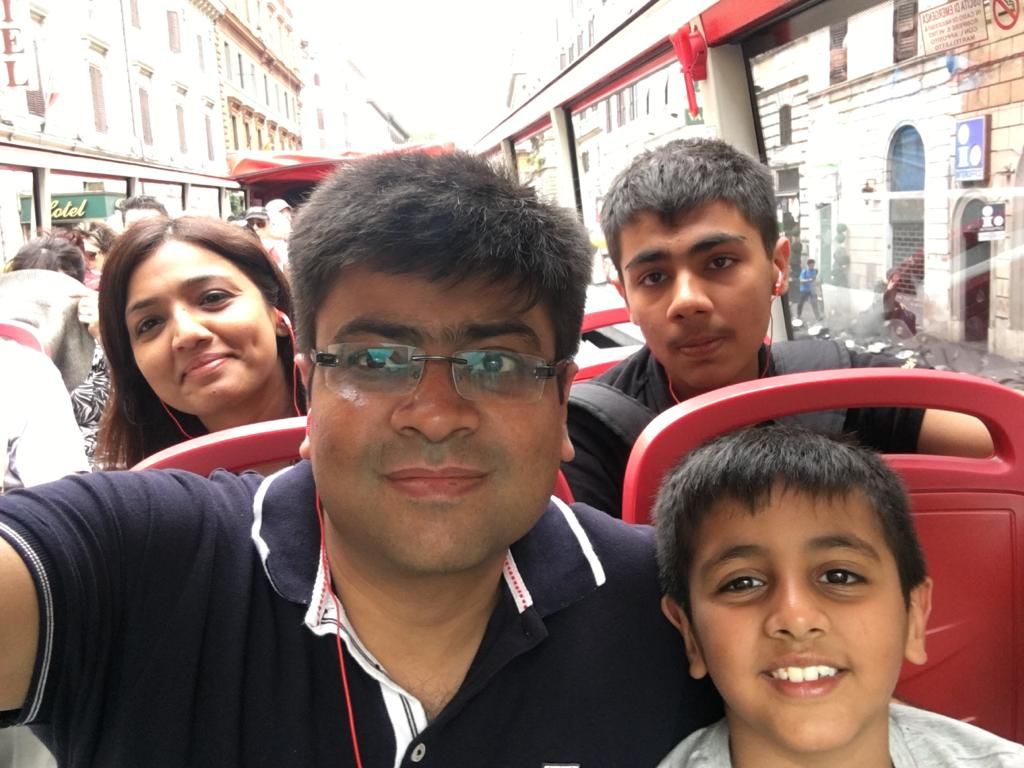 Prithu's family that has been by his side like a rock solid support | Photo: Mohit Gupta

We were not able to get in touch with Prithu after he achieved his GM title. He still has the tournament to play at the Portugal Team Championships. Speaking to ChessBase India, Prithu's father Mohit Gupta said, "Prithu with his achievement has proved that passion triumphs. I would like to thank his school principal Mrs. Minakshi Sahni, Bharat Singh Chauhan, his coaches, and his grandmother."

After Prithu became a GM, we contacted his trainer Roktim Bandyopadhyay. "Prithu has good positional sense and capable of playing quality chess. I find him  pretty imaginative, extremely dedicated and passionate, loves to work ,and is a simple guy who sees the world from a different angle. He was under some pressure for some time due to this GM title thing but now he is free from that. And, I expect and believe that he will reach a quite decent level in coming years. His journey with me began when he was rated 2100 and now he is 2500! In 2017 we had our first session and I saw him change so fast! It's just unbelievable." 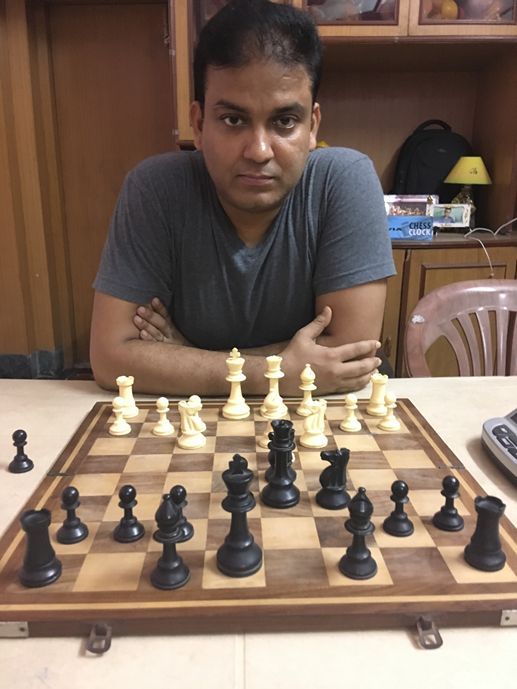 We asked Roktim about one of Prithu's game that he considers to be his favourite, "His game against Maxime Lagarde from the Reykjavik Open 2019 was very good. There is one more game that impressed me quite a lot. Surprisingly it was a game that he lost due to a blunder. It was against Abhimanyu Puranik. I consider Abhimanyu to be a good positional player and hence the way Prithu outplayed him made it quite a special game."

Here are both the games of Prithu against Lagarde and Puranik:

Here is my (author's) favourite game of Prithu, his win over GM Nikola Djukic. Look at how he just gave up material in the opening and went on to outplay his 2566 rated GM opponent. You can replay the game below, and check out the video analysis of it through the link at the end of the article. 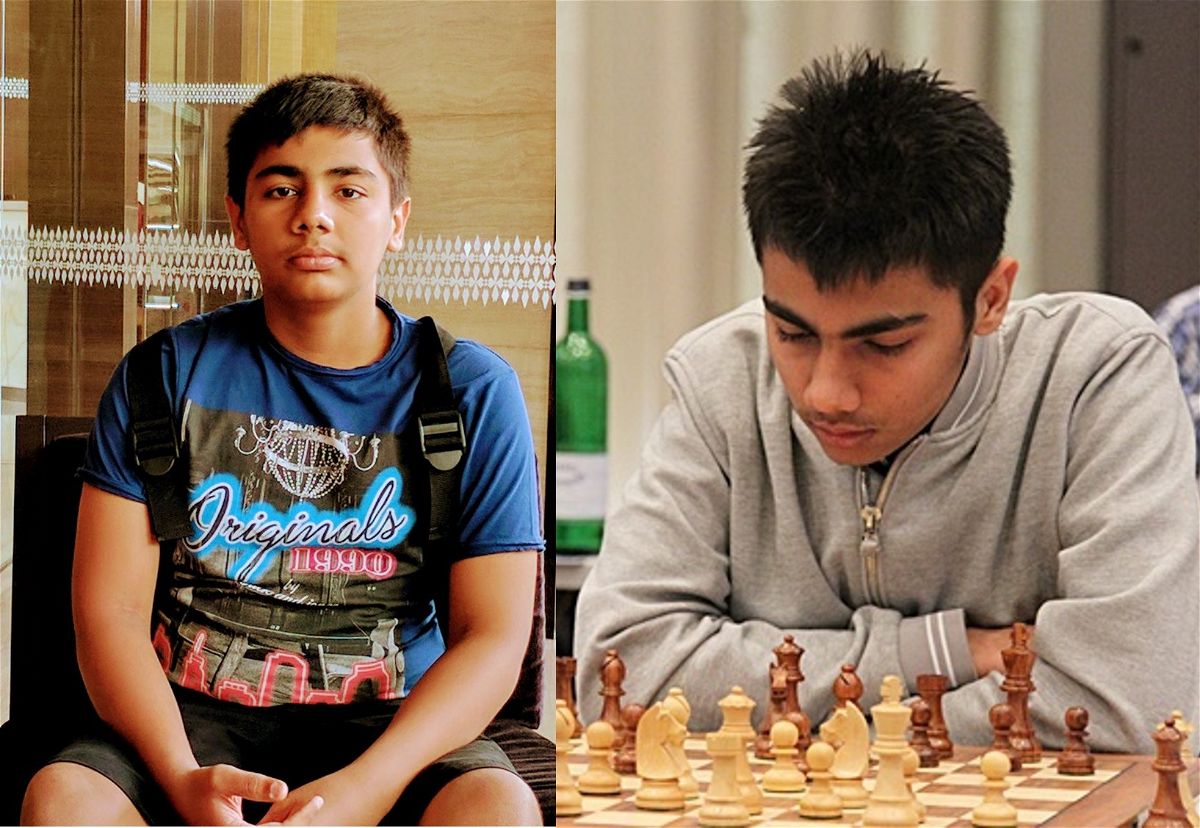 From being a 1187 rated played in October 2013, to becoming a GM in July 2019, Prithu has been able to gain 1300 Elo points in a little less than six years! The boy with his hard work, determination and never say die spirit has shown that nothing is impossible. He never let his academics suffer, he played in very few tournaments, he fought ill health at many events, but his talent and the love for the game was so huge that no problem was insurmountable for the youngster. Well done Prithu. The entire nation is proud of your achievement. Now onwards to becoming a world class player!