Anupam and Om are the National Under 9 Champions

To get a taste of the young talent in India, you should have been at the recently concluded National Under 9 Chess Championship in Gurugram. The tiebreak here was decided by the head to head encounter between the tied players. In the final round, two players who were leading the tournament by a one-point margin had to suffer a bitter defeat and their opponents got ahead of them. This clearly indicates that a new generation of chess players is in the making, which isn't only aggressive but knows very well how to perform under pressure. In the Open group, it was Om Kadam from Maharashtra who clinched the title while among the girls, Anupam M Sreekumar wore the champion's crown. A report. 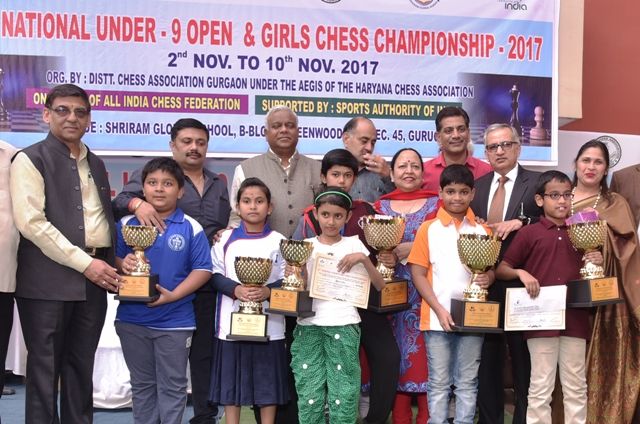 Gurugram, Haryana: The National Under 9 Chess Championship was conducted under the aegis of The All India Chess Federation and the Haryana Chess Association at the Shri Ram Global School in Gurugram, Haryana. In the Open Group, Om Kadam from Maharashtra emerged as the champion while Anupam Sreekumar from Kerela won the title in the Girls' Group. The tournament attracted around 300 participants from all corners of the country.

Do tune in to our special Hindi podcast of Under 9 Nationals! 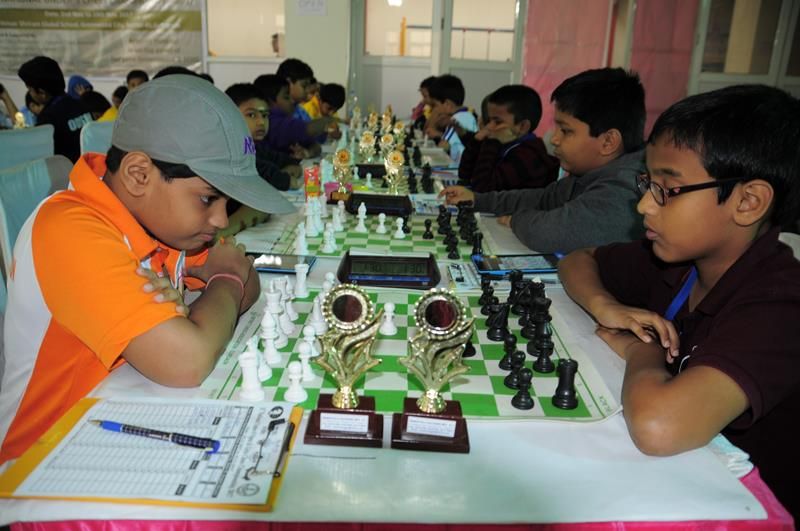 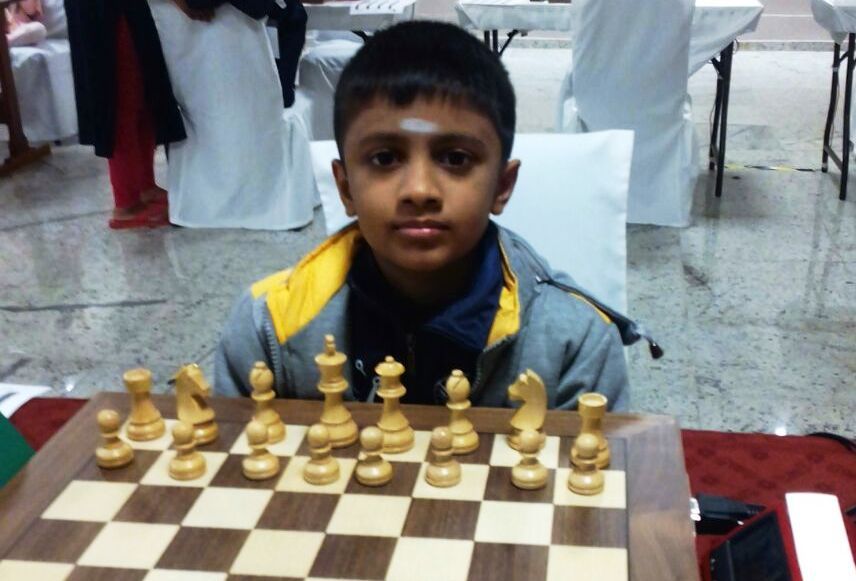 Tournament's top seed, Ilamparthi A R had been struggling with his form since the very start of the event and in the final round was beaten by Viswak Sen from Telangana 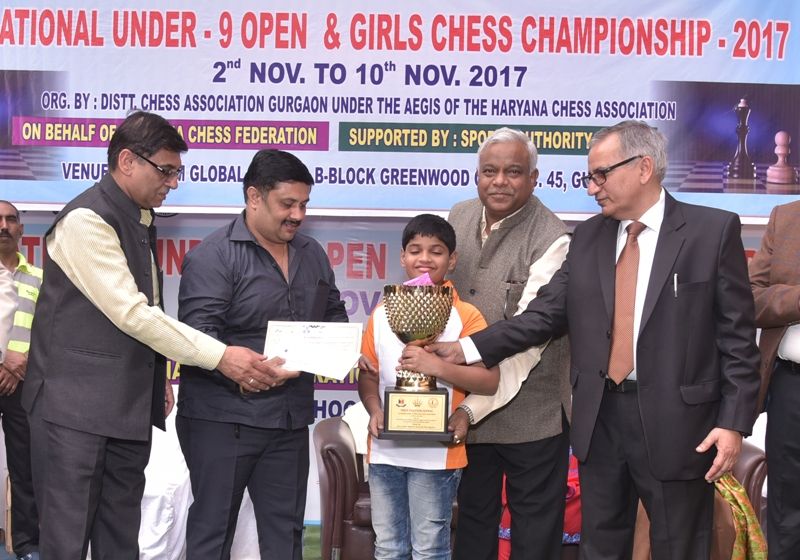 Om Kadam scored an undefeated 9.5/11 to bag the top prize in the Open Group 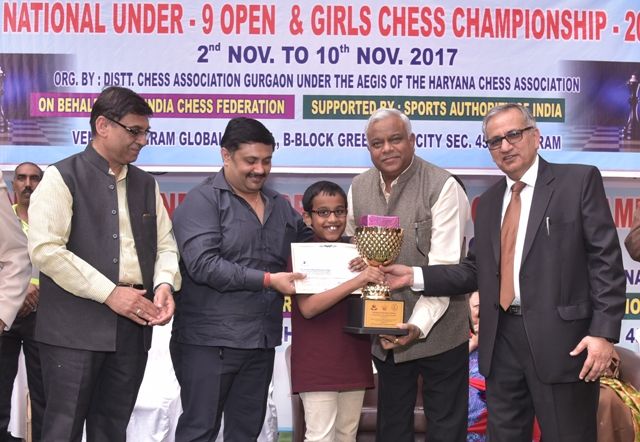 Kerela's John Veni also scored 9.5 but his loss against Om in the final round lost him the tiebreak and pulled him down to the second spot 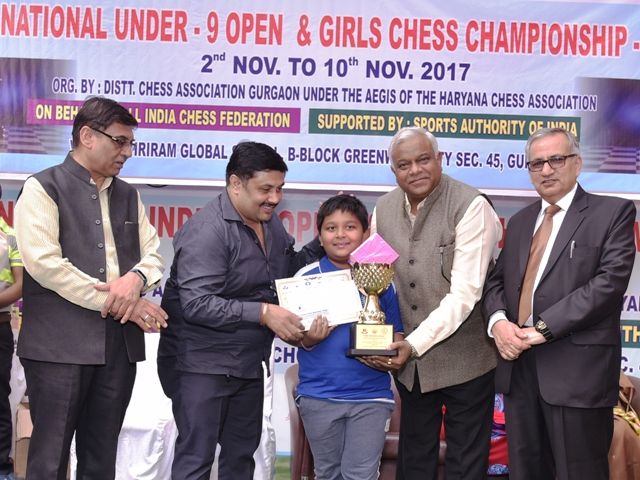 Telangana's Viswak Sen and Arjun Adireddy took the third and the fourth spot respectively scoring 9.0/11 while the Rajasthani boy, Yash Bharadia bagged the fifth place with a score of 8.5 points. 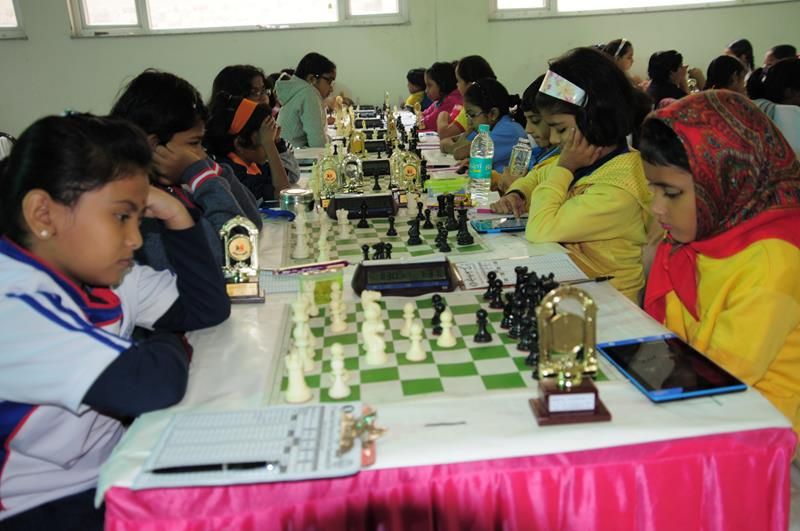 An interesting situation arose in the Girls group when three girls finished the tournament tied for first at 9.0/11 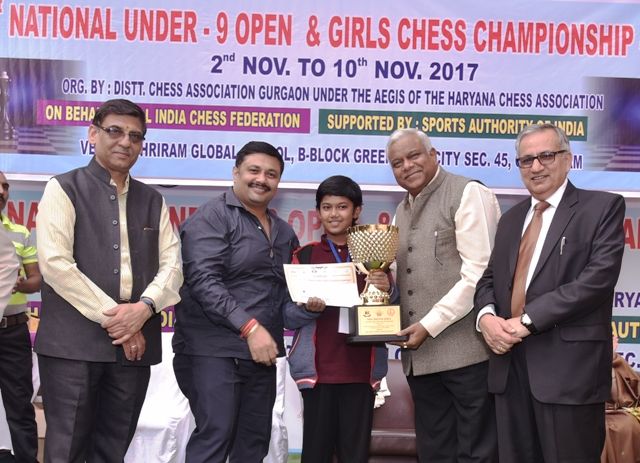 Based on tiebreak, Telangana's Anupam Sreekumar was awarded the title 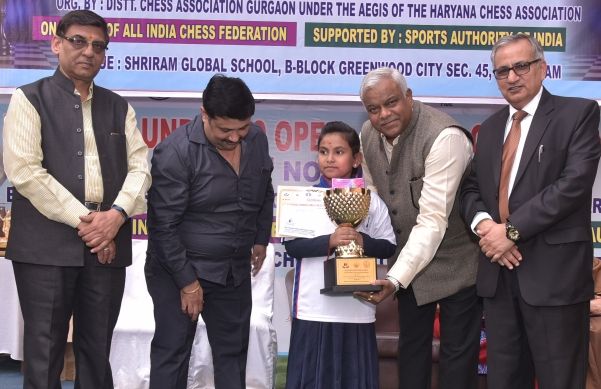 ...while Karnataka's Shefali A N was declared second 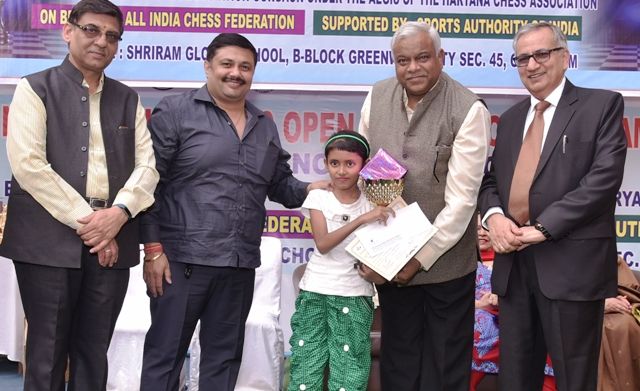 ...and Rajanya Datta was declared third

Aashi Upadhyay and Rianna Netta took the fourth and the fifth spot respectively, having scored 8.5/11 each. The top three from each group will be representing India at the World Championship scheduled to be held next year in Santiago, Spain. 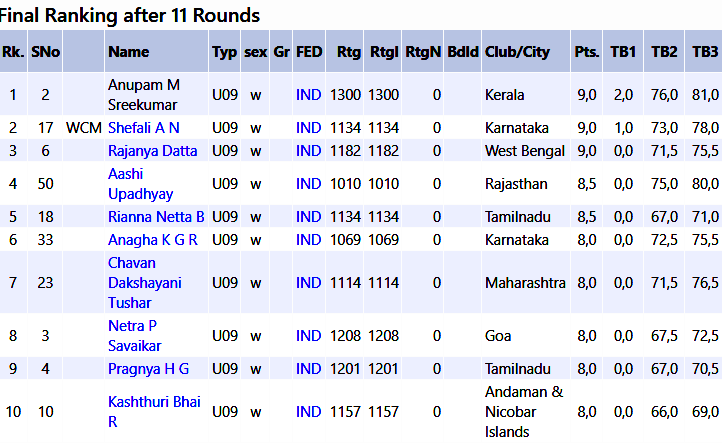 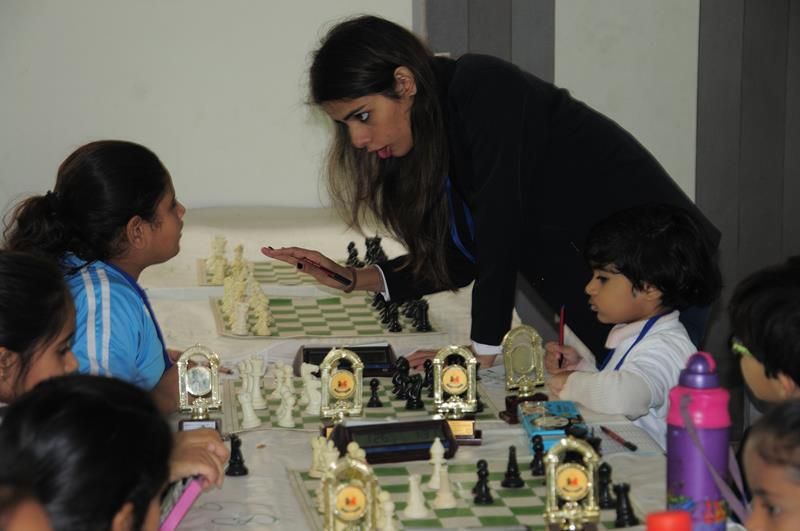 The role of an arbiter at a kids' tournament is a much bigger one in comparison to that in a tournament for adults. One needs not only the knowledge of rules but also a lot of patience to accomplish the job successfully 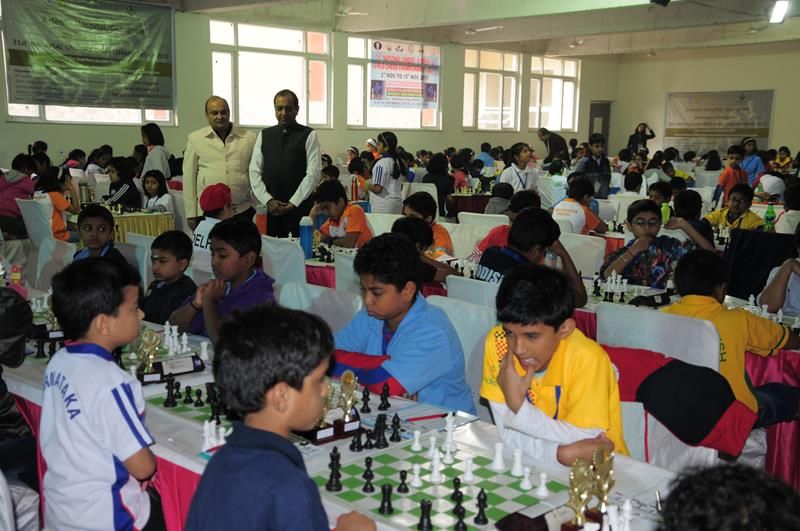 A snap of the final round action 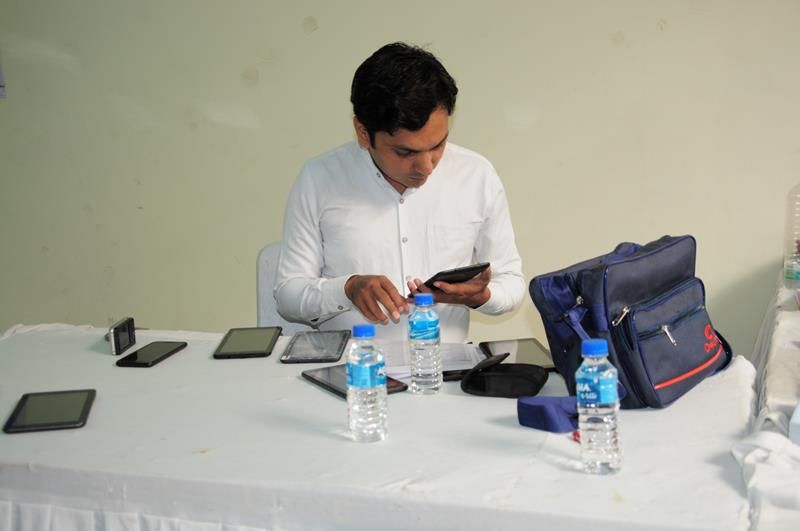 All games were broadcasted live by International Arbiter Jitendra Chaudhary. He has also contributed to this report for which ChessBase India would like to thank him. 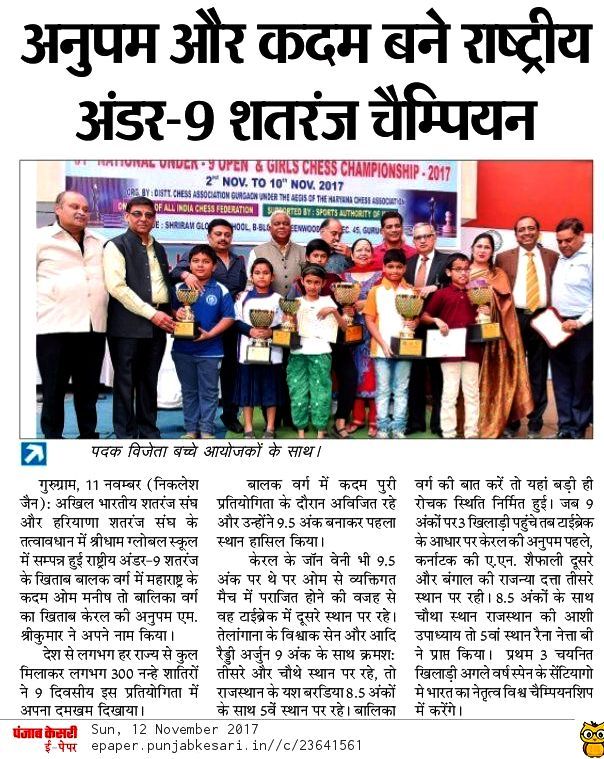 An article on the National Under 9 in Punjab Kesari

Previous reports on the National Under