National Women's 2019 Round 7: A day of mistakes and missed chances

The seventh round of the 46th National Women's Championship 2019 was a day of mistakes and missed chances. On board-1 it was the highly anticipated Bhakti Kulkarni versus Soumya Swaminathan matchup but the encounter simply failed to live up to the expectation as the top-seed of the event couldn't quite find her form against the defending champion. Vantika Agrawal and Nandhidhaa P V drew their respective games against Pratyusha Bodda and Michelle Catherina; while Swati Ghate, who had made an impressive recovery after losing her first round game, faltered and lost to Meenakshi Subbaraman in a winning position. However, the biggest shocker came from Vijayalakshmi Subbaraman versus Potluri Saye Srreezza, where the former made a crude mistake on move 71 to lose in a dead drawn queen-pawn ending.

Bhakti has an easy outing against Soumya! 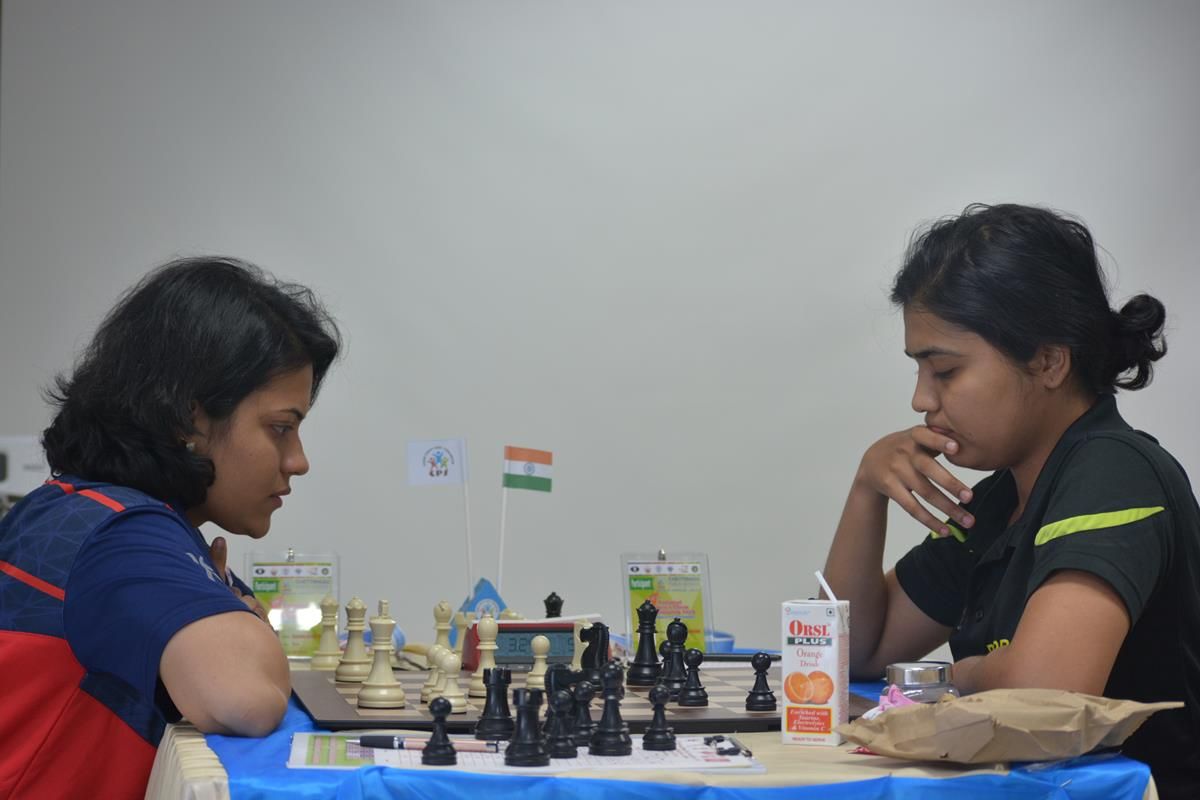 The Bhakti versus Soumya match-up didn't quite spark the fires as the latter couldn't put her best form on show | Photo: IA Gopakumar Sudhakaran

The seventh round of the 46th National Women's Championship 2019 saw the most anticipated encounter of the event as defending champion Bhakti Kulkarni was pitted against the top-seed Soumya Swaminathan. Unfortunately, the match-up didn't live up to its expectation. Soumya adopted the Grunfeld defense with the black pieces and ended up in a worse position as early as move 12 after making a premature pawn push on the flank, and on the 38th move she suffered an inexplicable brain fade and blundered away a whole piece. The game was resigned immediately thereafter. 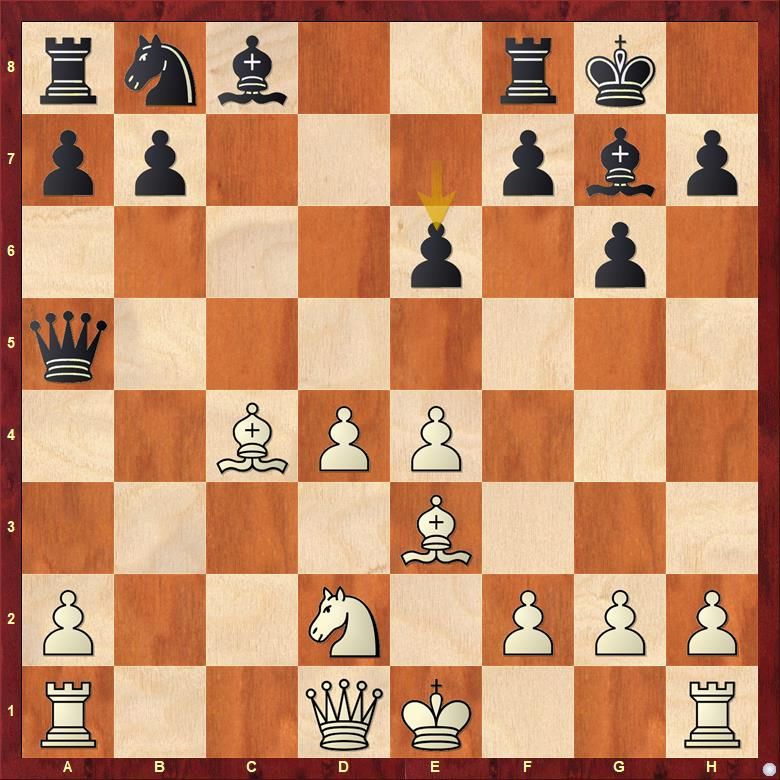 Position after 11...e6: A standard Grunfeld exchange position where White has the central pawn duo which Black hopes to put pressure on from the flanks.

White went 12.0-0 in the above position and now a move like 12...Nc6 would have been fine but Black lashed out with 12...b5?! instead which didn't look like the most logical of moves. 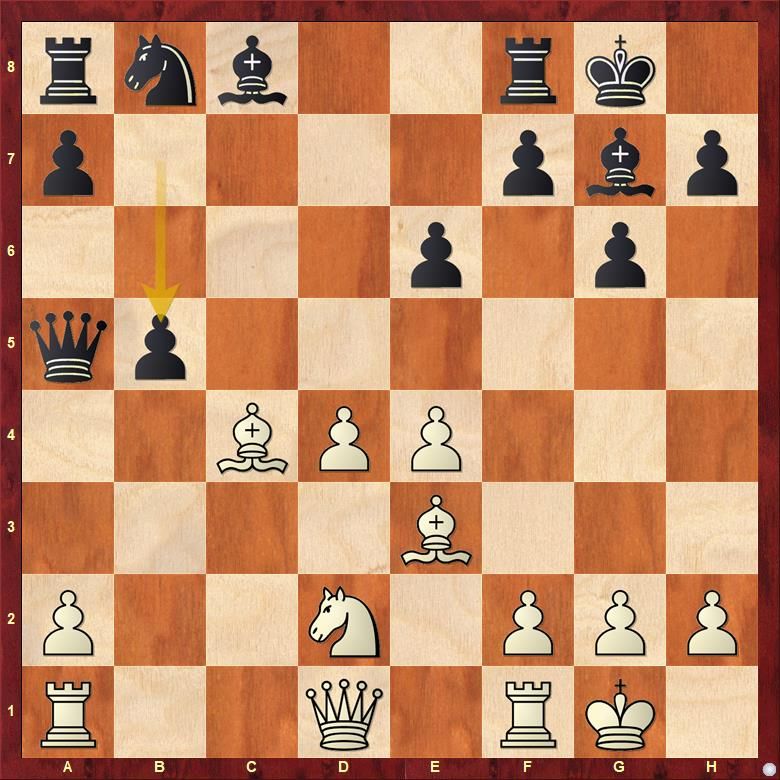 12...b5 simply invites Nb3-c5 and leads to the weakening of the queenside.

The game continued 13.Nb3 Qa4 14.Bd3 Nc6 15.Qe2 and White challenged the b5 pawn straightaway. Well, Black couldn't support it with a6 because that would make the bishop on c8 look ridiculous, that's one more issue with the untimely b5 push. 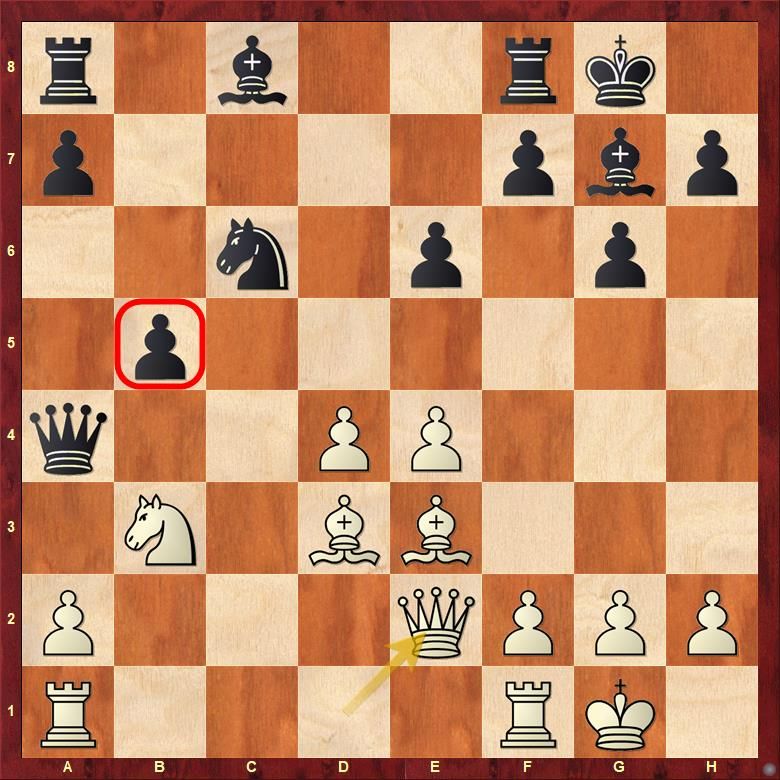 Position after 15.Qe2: The b5 pawn starts to feel a tad uncomfortable. 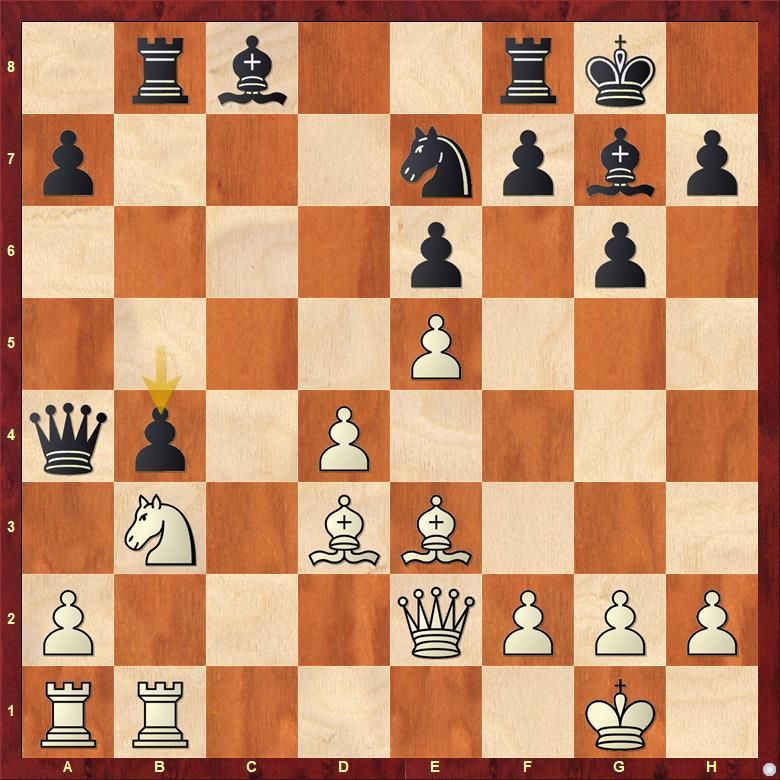 Position after 17...b4: This b-pawn has strayed too far up the board!

18.Nc5 Qc6 19.a3 a5 20.axb4 axb4 followed and it became apparent that sooner or later the isolated pawn on b4 would fall. Black stood worse and without counterplay. 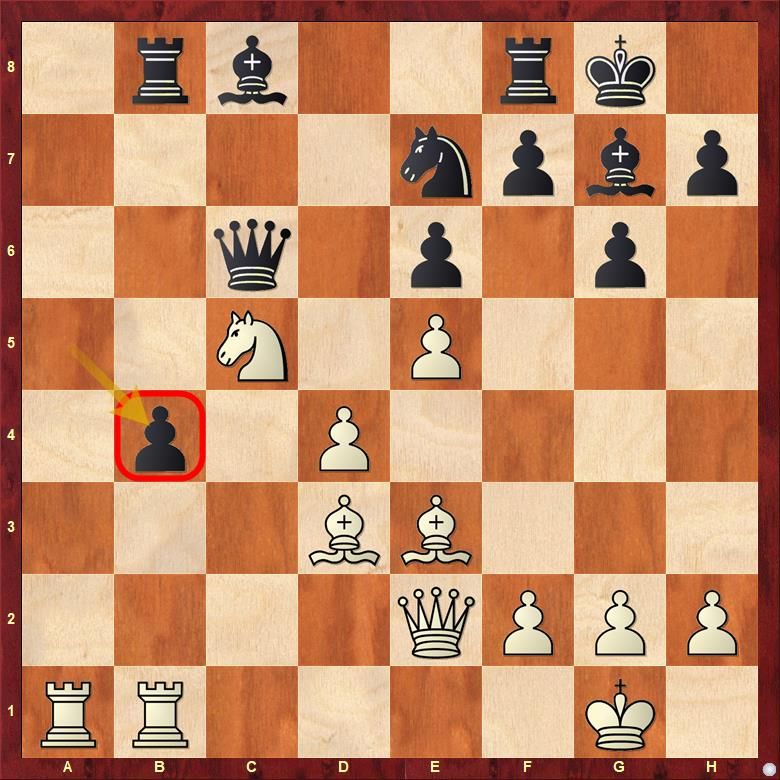 Position after 20...axb4: Black badly needs to bring some of the pieces to play.

21.Be4 Qc7 22.Qc4 Bd7 23.Rxb4 happened next and White finally picked up the b4 pawn. Black was simply down a pawn now but still it wasn't all game over until move 38 when the catastrophe struck. 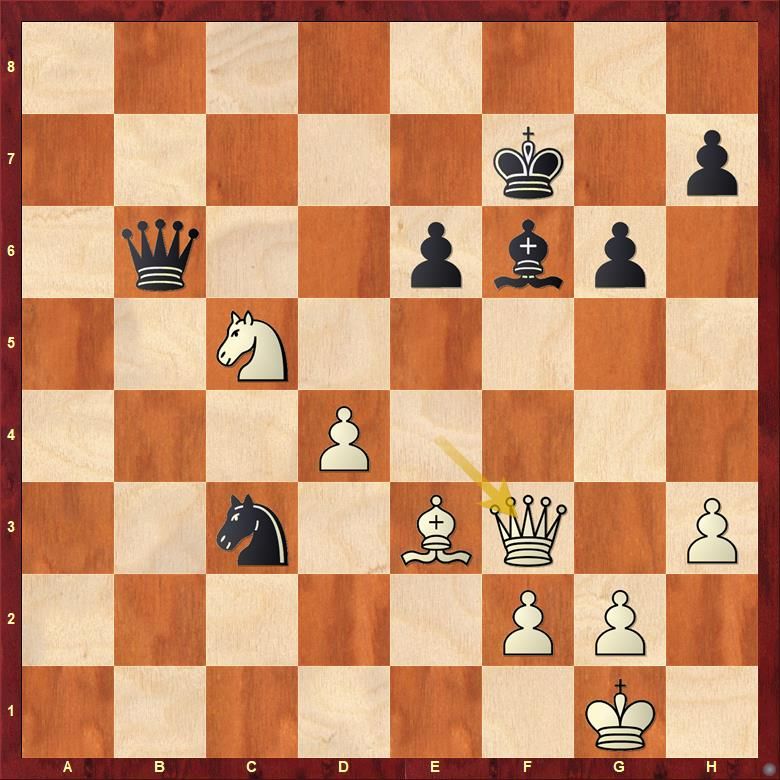 White has just played 38.Qf3 pinning the f6 bishop, now moves like Nd7, Bg5 looks threatening ... Black is worse but what should be her best chance at defending the position?

38...Nd5 would have been a logical try but Black lost it completely here and went 38...Ke7 - a poor tactical oversight. Can you guess what happened next? 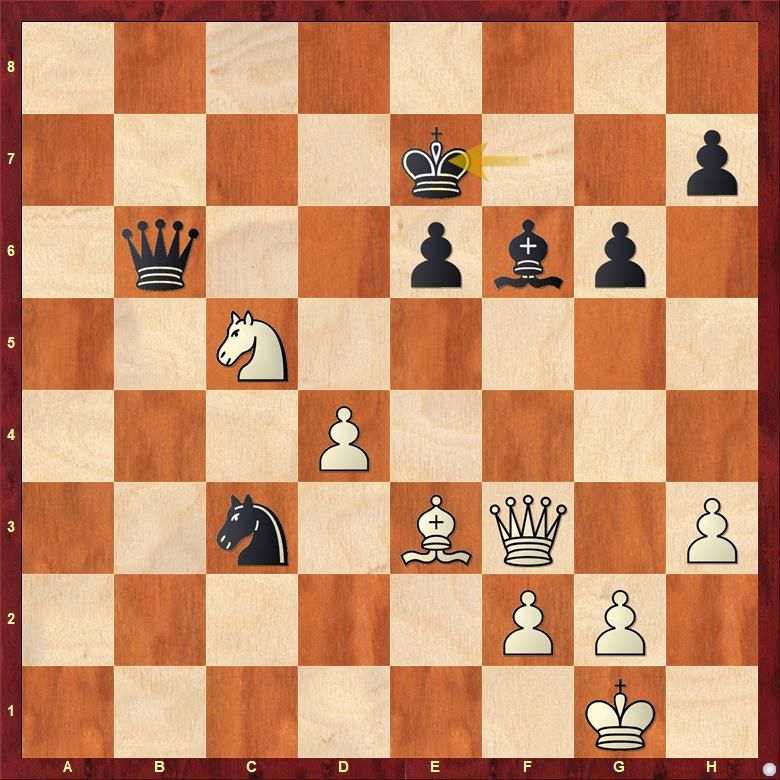 What did Black missed when she played 38...Nd5?

White simply took 39.Qxf6+ and Black resigned. After 39...Kxf6 40.Nd7+ White wins back the queen and ends up with an extra bishop. A bad day for Soumya! 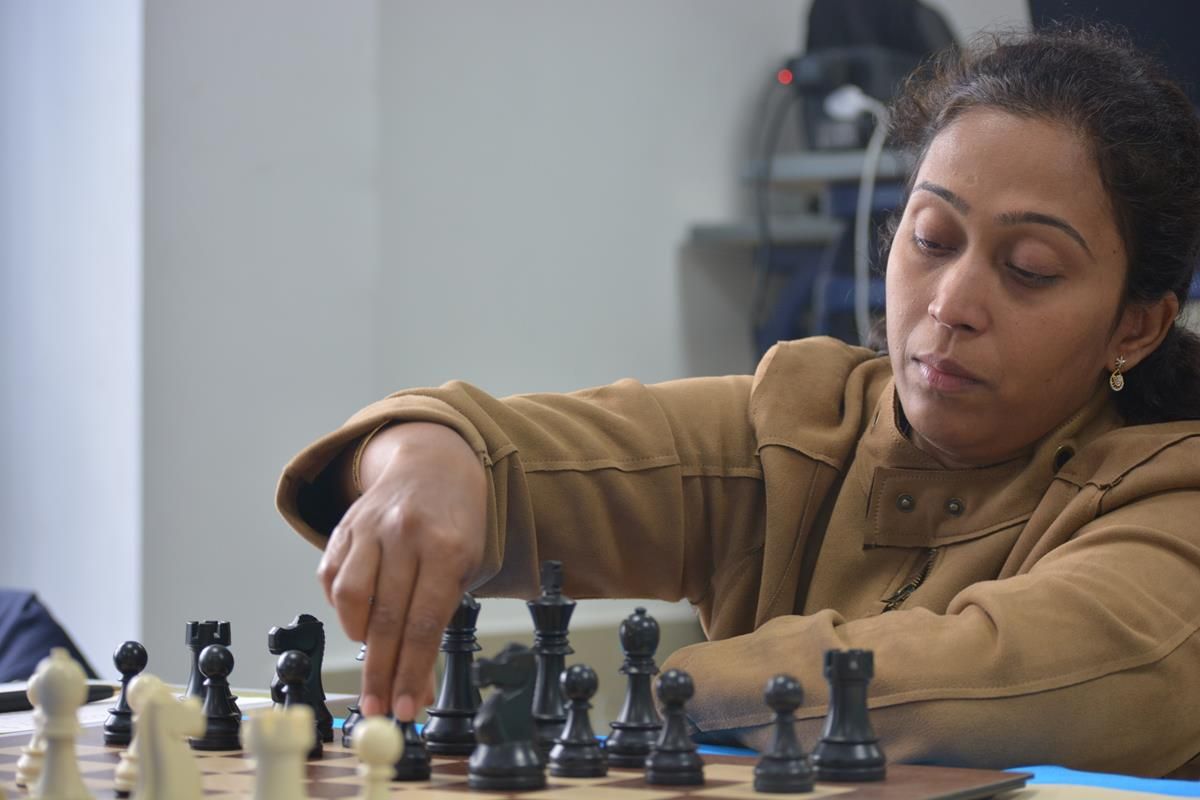 Another disappointment of the day came from Meenakshi Subbaraman versus Swati Ghate where the latter with the black pieces was pushing throughout the game but made unfortunate errors in the end to first miss her chance at winning and then lose the full point | Photo: IA Gopakumar Sudhakaran 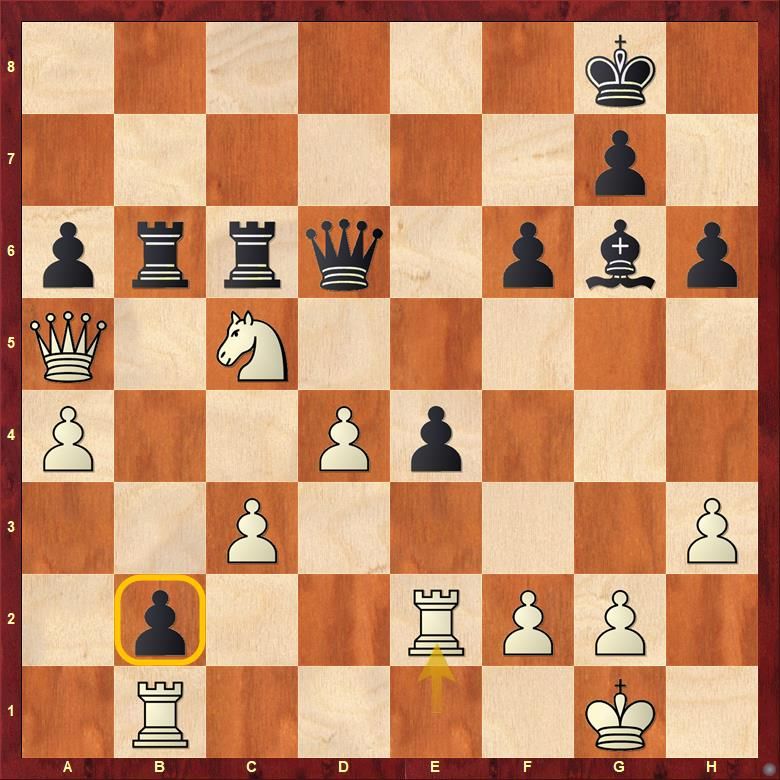 White has played 31.Re2, the first mistake of the game. Can you find a winning plan for Black?

White played 31.Re2 perhaps with the aim of winning the b2 pawn but what she missed was 31...Qc7! after which the pawn on b2 can't be touched because of the possible discovery on d8-a5. Now something like 32.Re3 Qf7 followed by Qa2 is completely winning for Black but Swati simply overlooked these and played 31...e3? 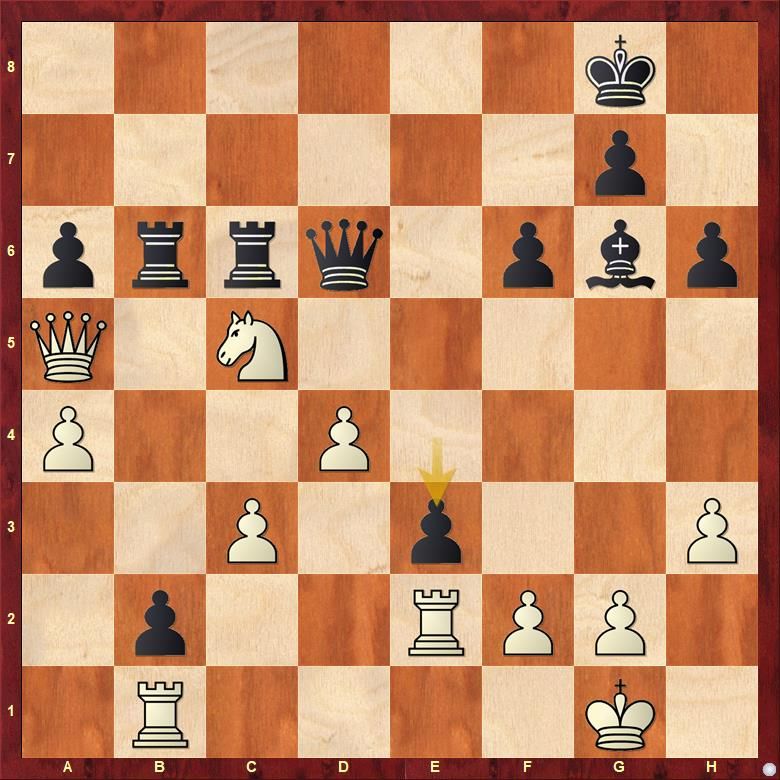 31...e3: The second mistake of the game. This blows away Black's winning advantage. 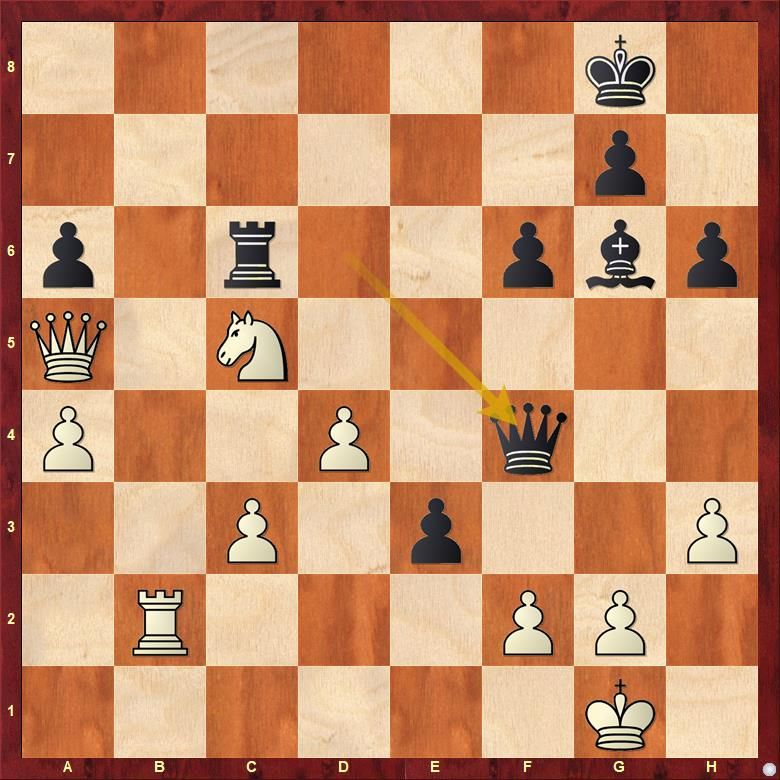 Quiz for you - It is White to play and win! 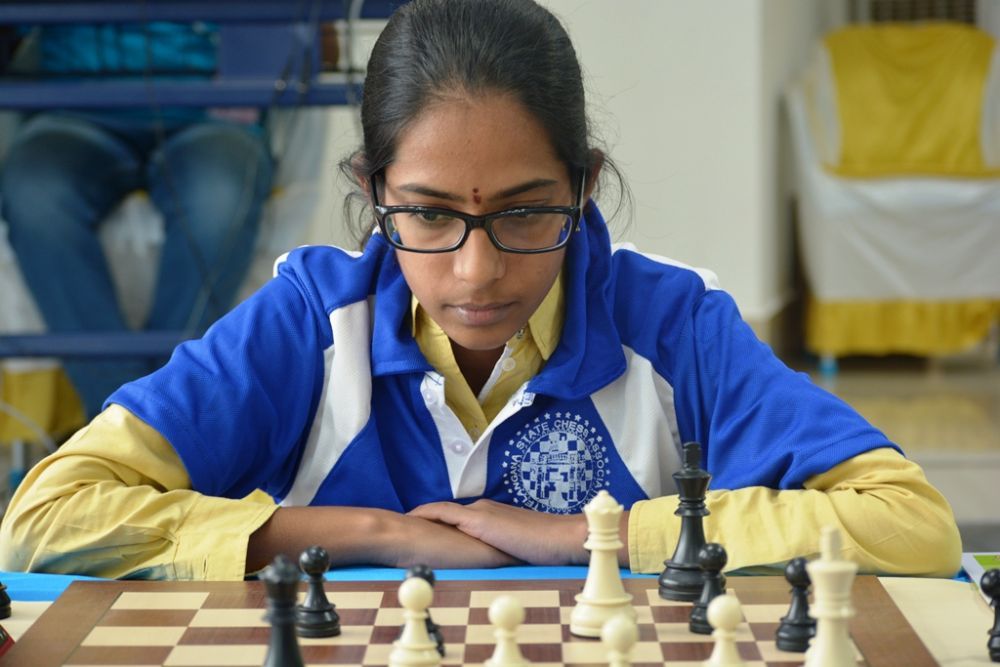 The biggest shocker of the day was pulled off by Potluri Saye Srreezza, a 1900 rated player from Telangana, who defeated IM Vijayalakshmi Subbaraman! | Photo: IA Gopakumar Sudhakaran 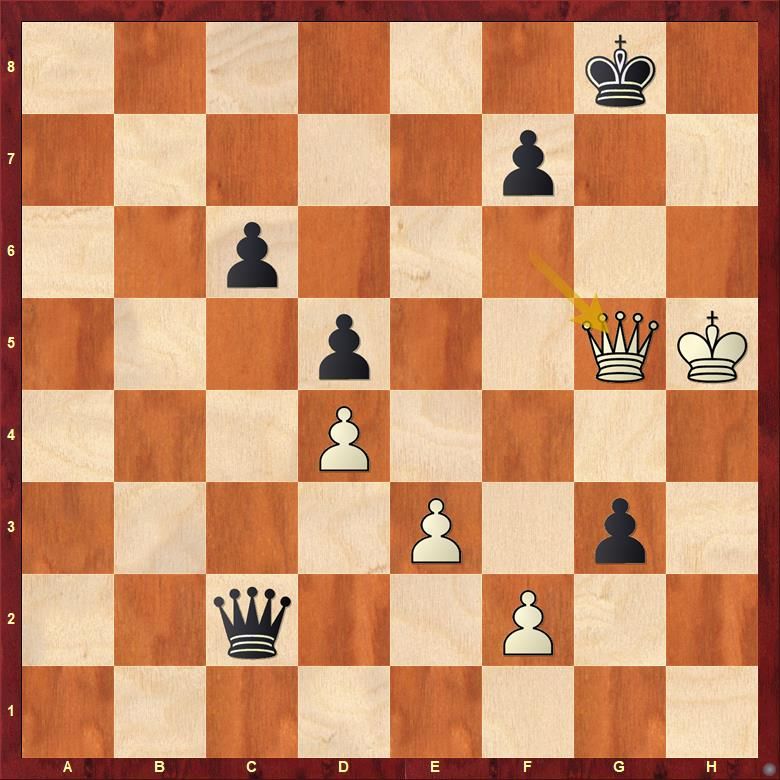 It was a perfectly equal queen-pawn ending when White made the abysmal 71.Qg5+ ... So, what's the winning move for Black?

Potluri played 71...Qg6+ and White immediately resigned. The point is as simple as it can be. This forces exchange of queens after which the g3 pawn simply promotes! 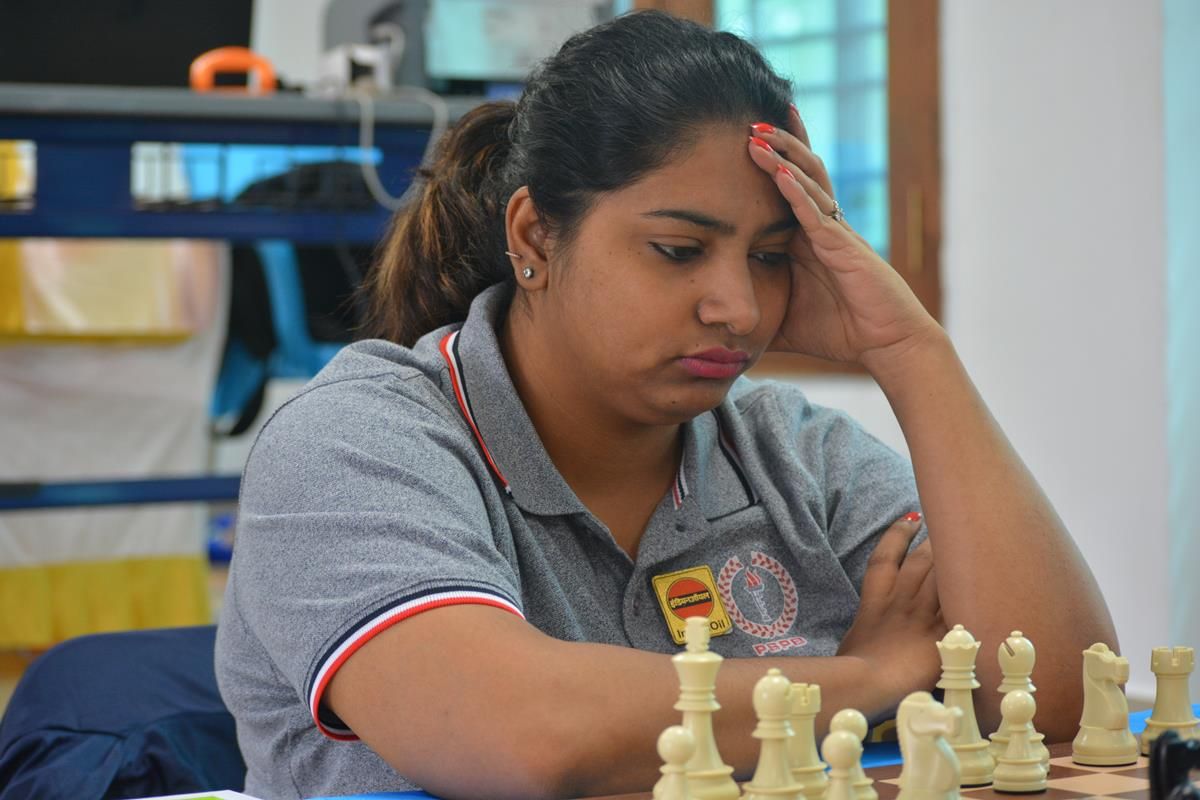 WGM Mary Ann Gomes beat WIM Priyanka Nutakki to take her score to 5.0/7. Will she be able to catch up with the leaders? | Photo: IA Gopakumar Sudhakaran 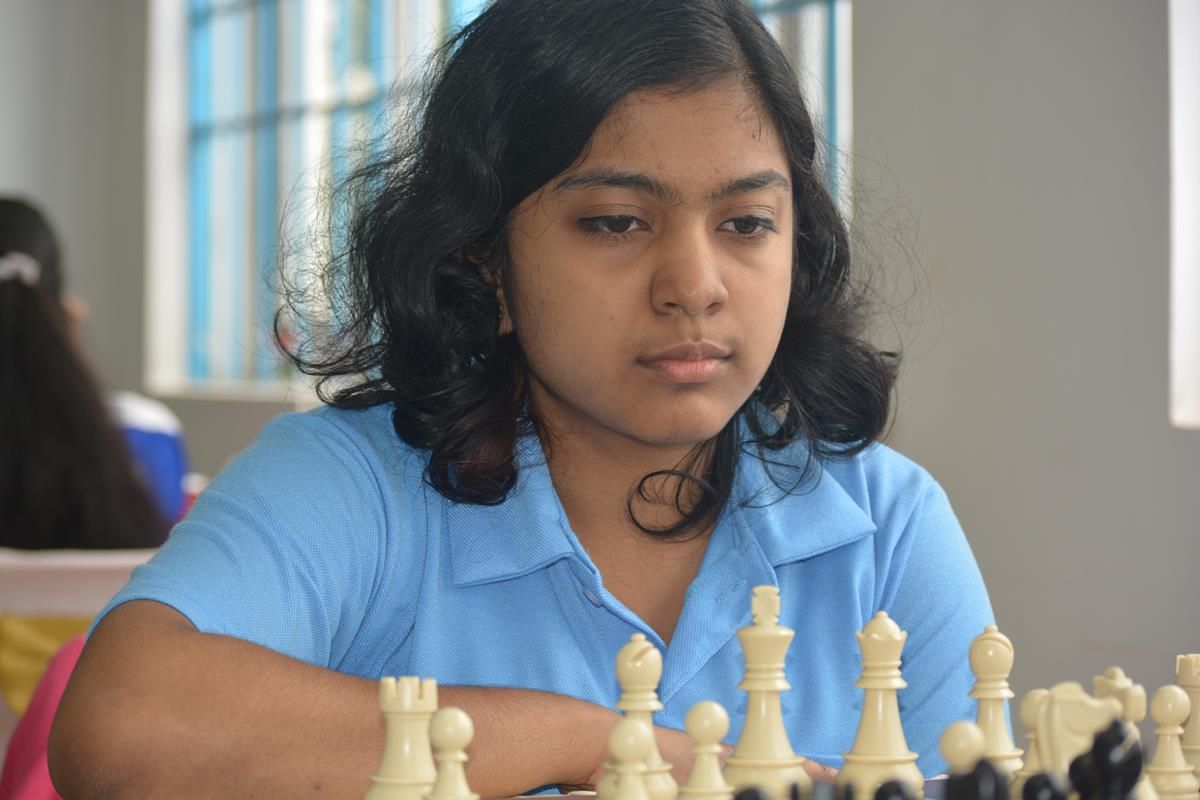 WIM Michelle Catherina drew WIM Nandhidhaa P V and is on fourth place with 5.5/7, while Nandhidhaa is on third with same points | Photo: IA Gopakumar Sudhakaran 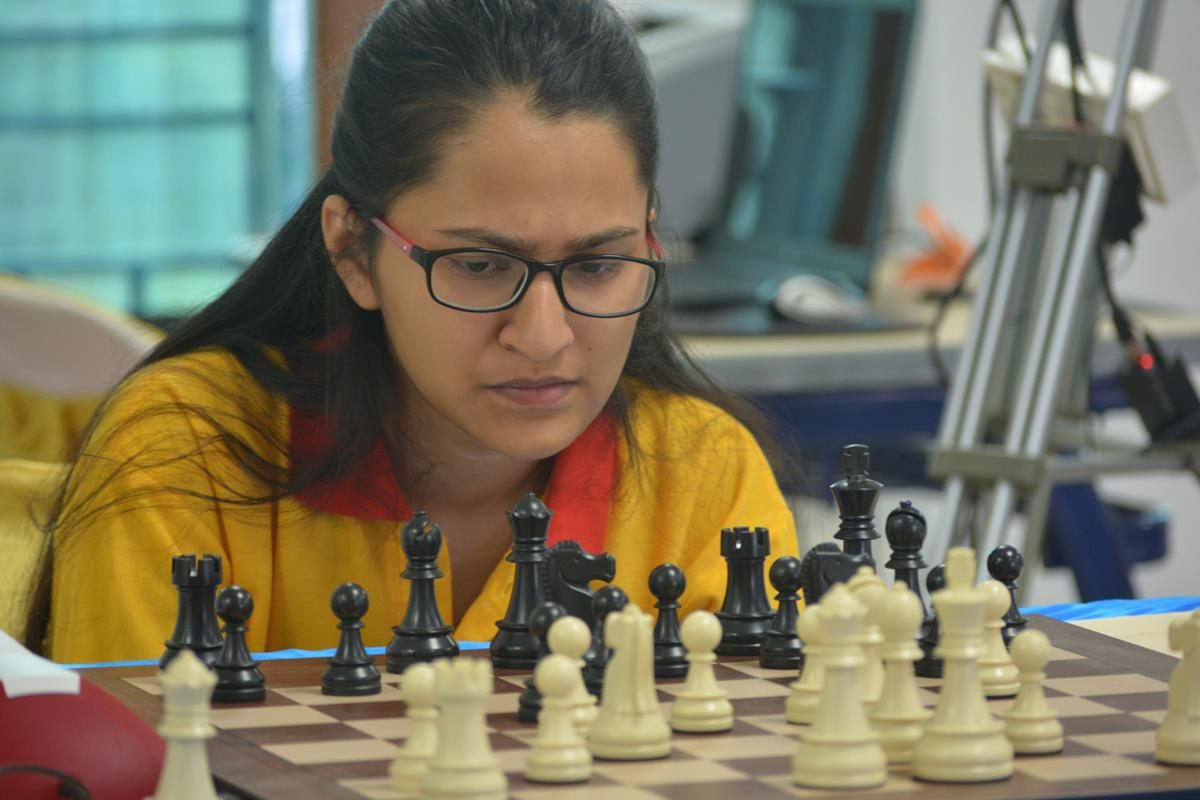 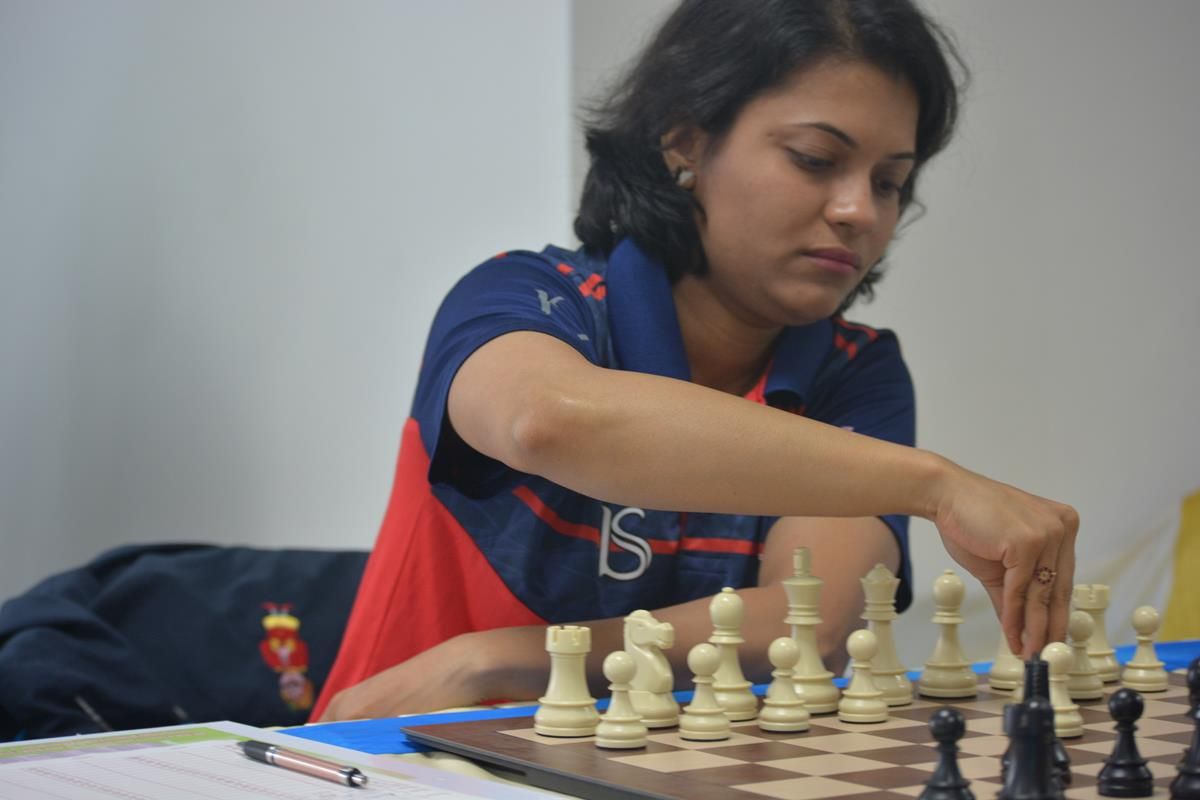 Bhakti Kulkarni has finally taken the sole lead with 6.5/7 points, will she be able to defend her title? | Photo: IA Gopakumar Sudhakaran