Do you agree with our title? If you don't, then read on. In this article we are going to show you two games where the critical moment was so difficult to understand that strong players like Soumya Swaminathan and Vantika Agrawal went wrong. Just one wrong move and the game was over. That's why chess is such an unforgiving game. On the other hand Bhakti Kulkarni is playing chess like a person who has just about everything under control. She doesn't miss any tactics. If she gets an advantage she calmly converts it. It's almost as if she cannot put a foot wrong. With 8.5/9 she is now leading the tournament with 1.5 points and has already gained 36 Elo points. In round 10 she takes on K. Priyanka. Will she stop Bhakti Kulkarni? Follow the live games on 26th of July at 10 a.m.

Chess as a sport is quite tough. You have to keep making one good move after another and when you falter, you lose the game! You build a beautiful position, and then one mistake simply spoils it! This is exactly what happened to top seed Soumya Swaminathan against Varshini in round 9 of the National Women's championships 2019. She played the opening really well and until a certain point was clearly better. 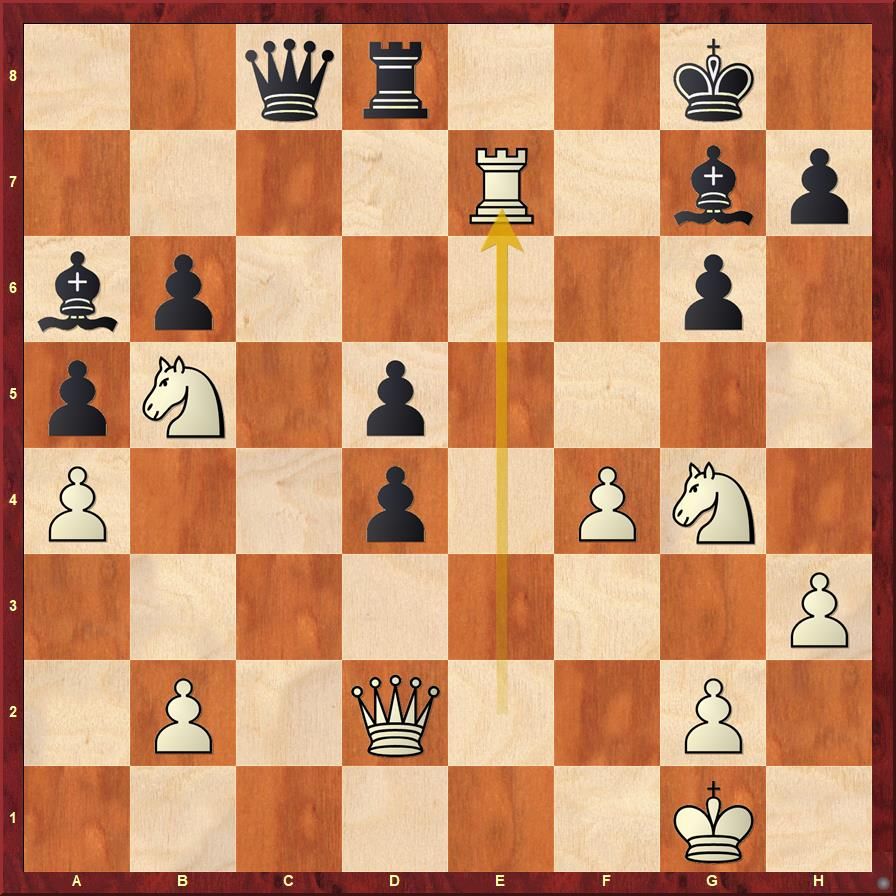 White has moved in with her rook to e7. Now Soumya must just take the knight on b5 and then play Qc5, she is just winning the game. Instead she went Qc5 directly. 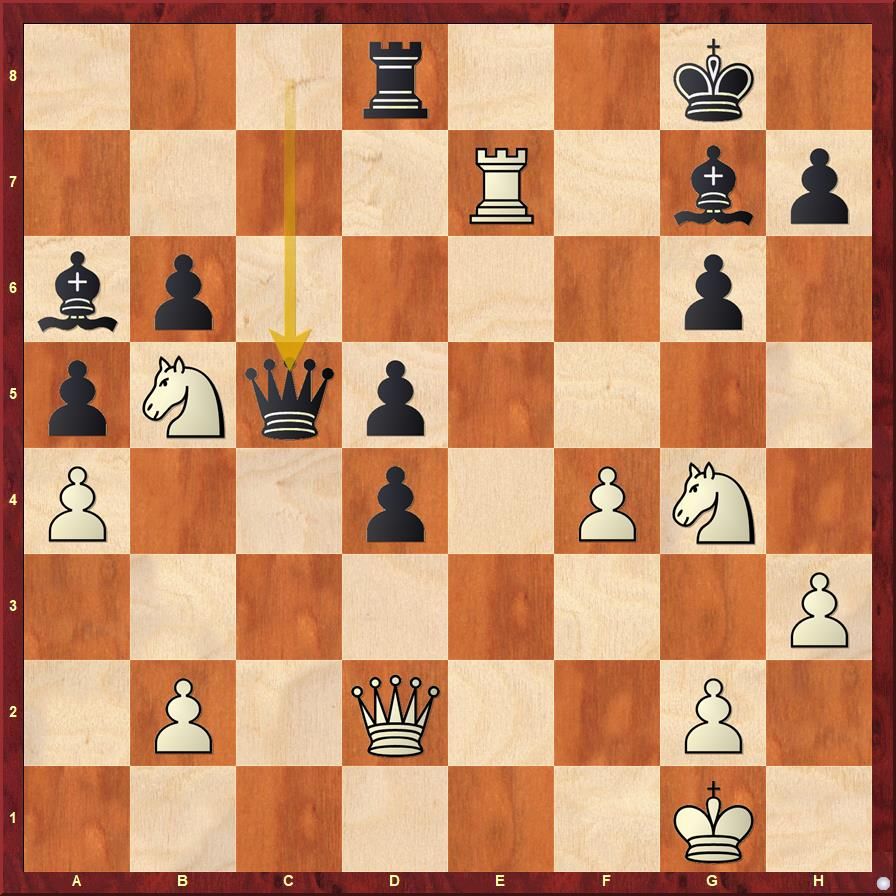 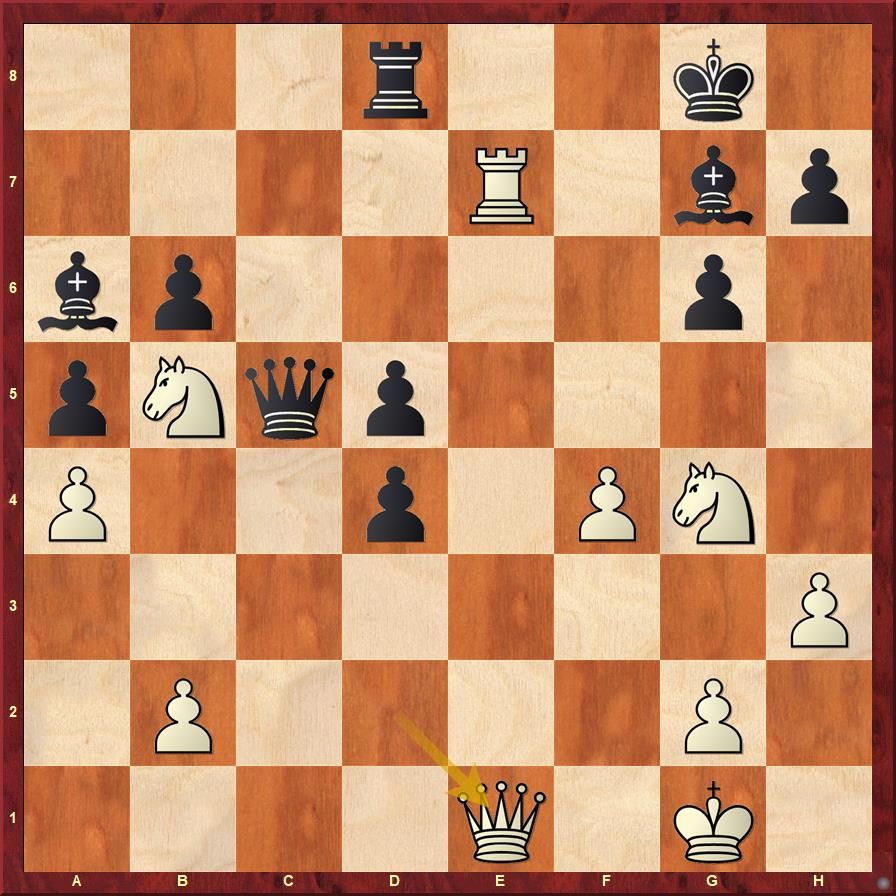 At first the strength of the move is not apparent. What is so special about it? Can I not just take ...Bxb5? Well, here is the beautiful point of the entire combination. After ...Bxb5,White plays... (would you like to guess the move?) 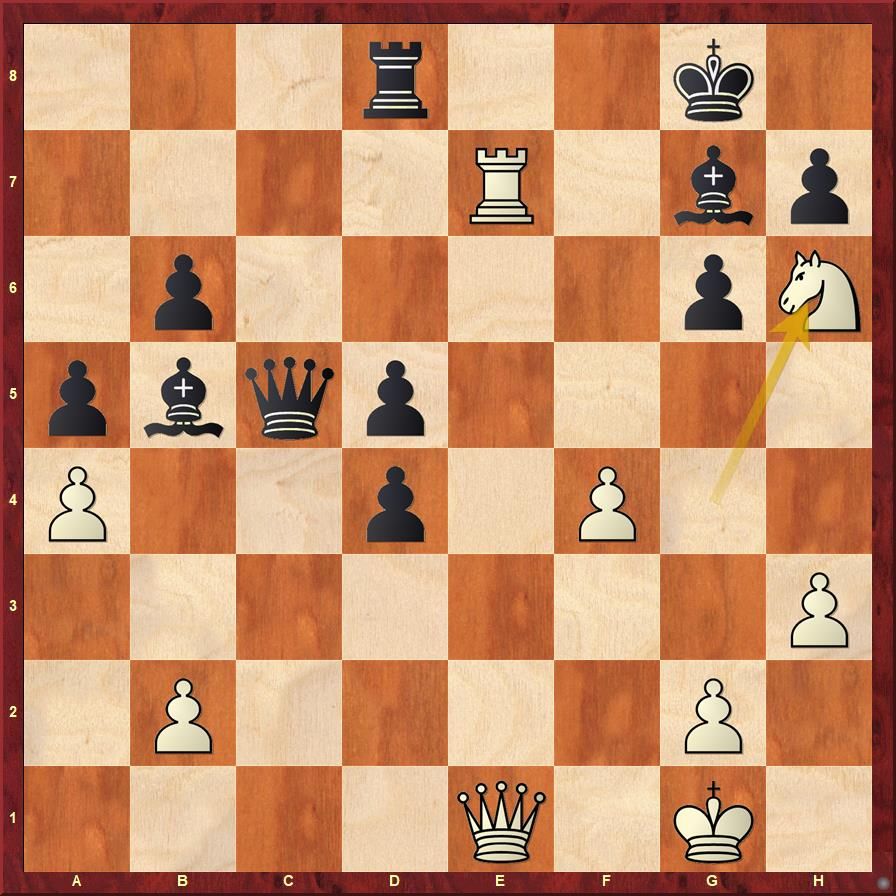 Nh6+!! A move that is just so easy to miss. It looks like a random check. Just that it isn't! You can work out the details here. The main point being that ...Bxh6 loses to Qe6+ and Qf6+

This is what makes chess so difficult. You just don't understand always when is the critical moment in the game and when is it that you really need to put your head down and calculate. The ideal answer would be to do it on just about every move. But we are after all humans, with finite energy and hence we decide to use our resources in an efficient manner in positions where we think we need to. And sometimes, we are unable to recognize the critical moments, like Soumya did here. She missed either Qe1 or Nh6 and it was all over. 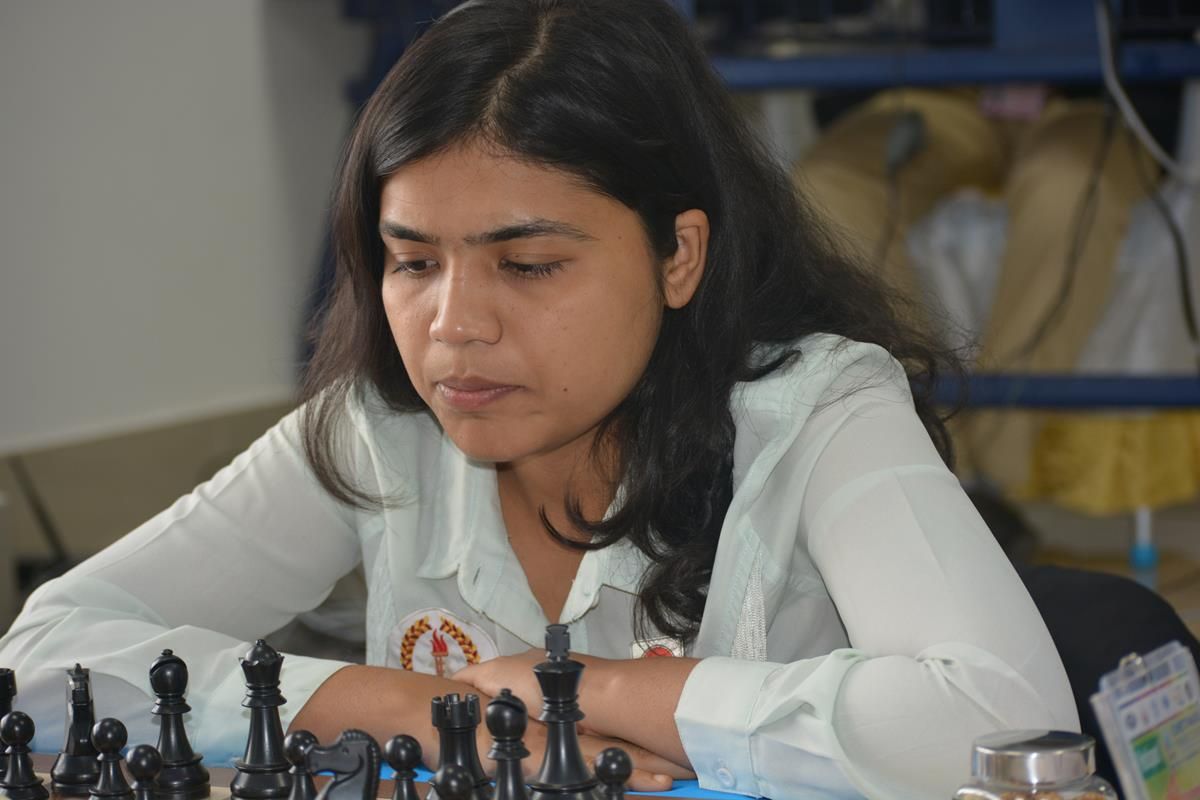 For Soumya Swaminathan, this tournament has not gone as per plans | Photo: Gopakumar Sudhakaran 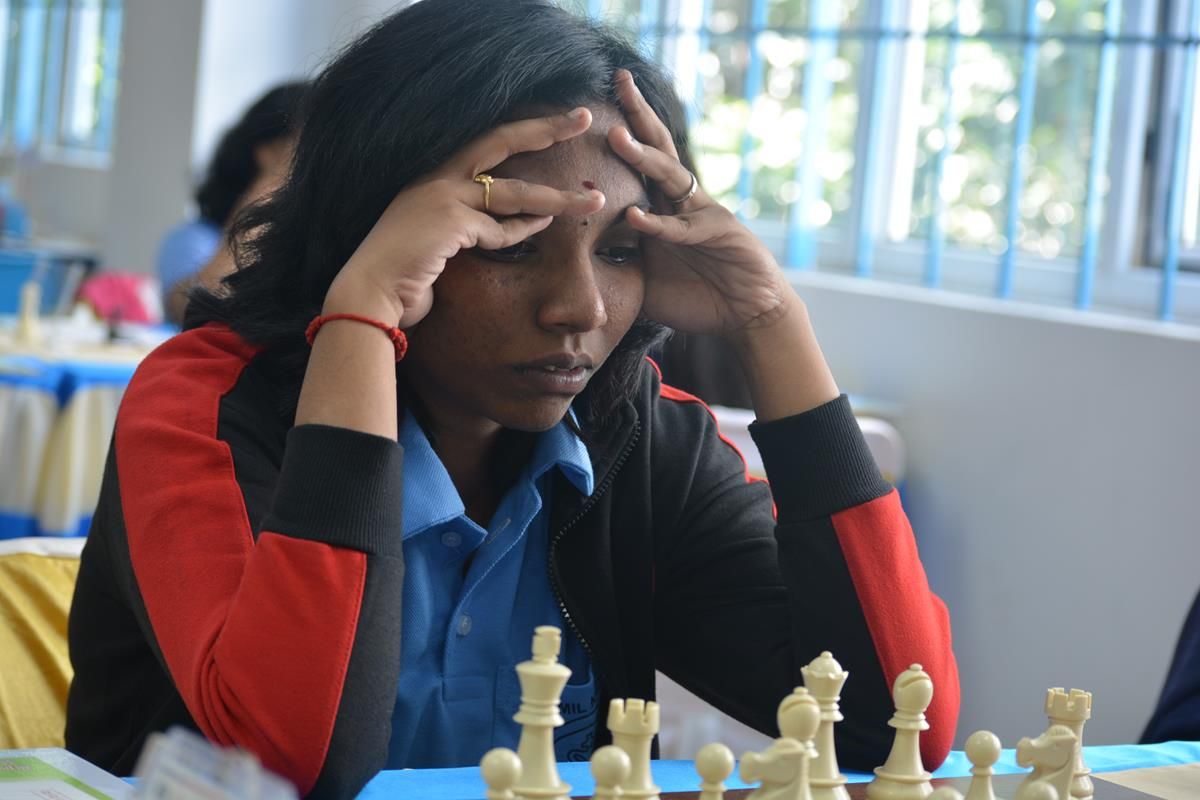 Varshini now moves to 6.5/9 and has chances of a strong finish | Photo: Gopakumar Sudhakaran

Not convinced that chess is a tough game? Well, let's have a look at another example from round 9 . This is the game between Priyanka K. versus Vantika Agrawal where Vantika faced the same problem as Soumya. 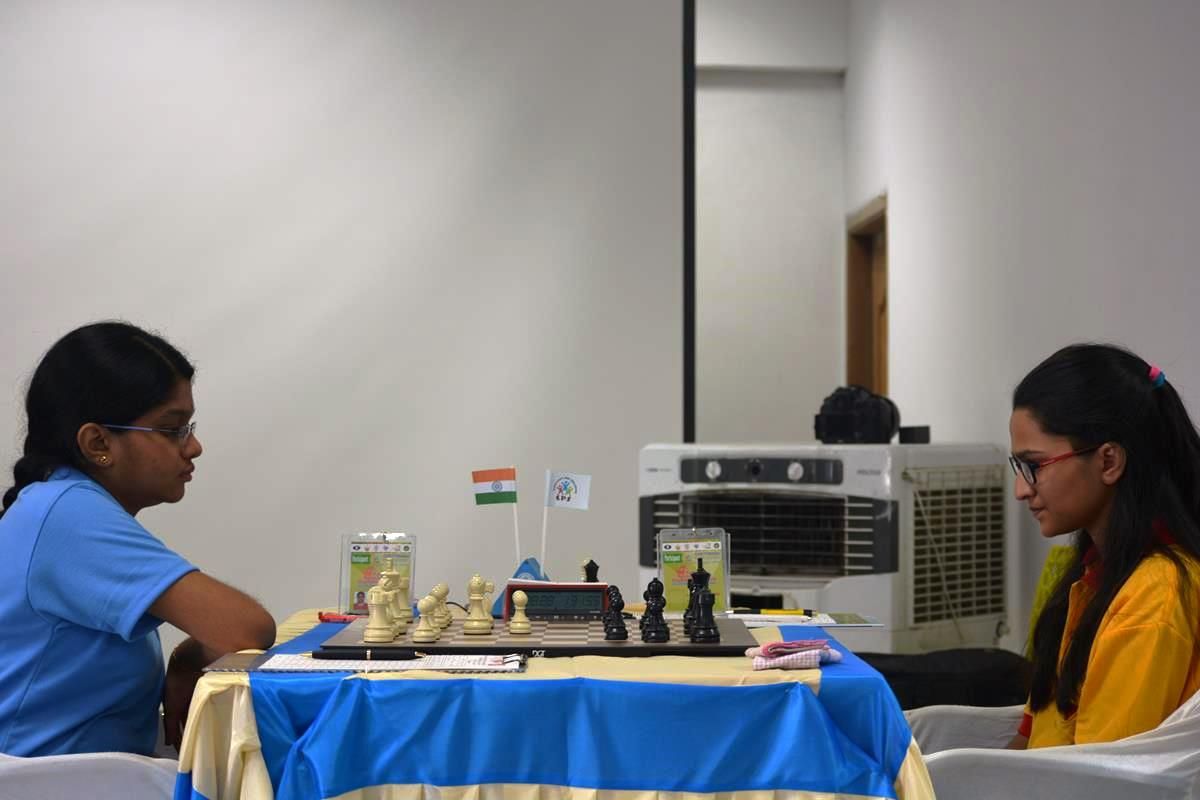 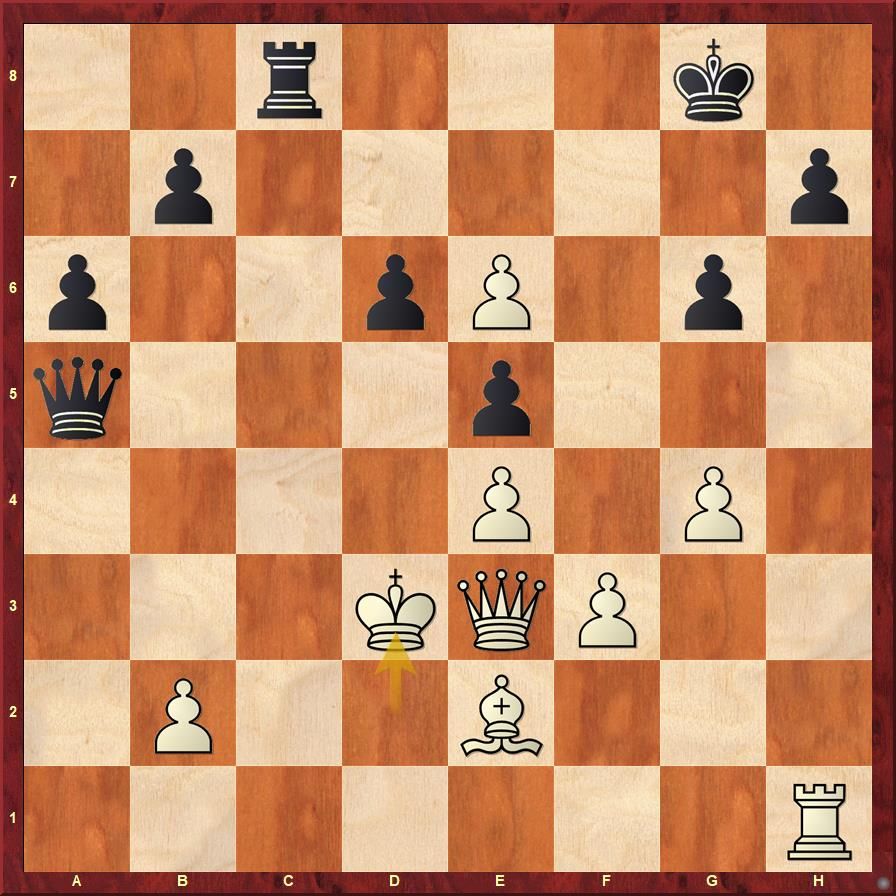 Black could have agreed to a draw here with Qb5+ Kd2 and Qa5+ There is no way to avoid the perpetual checks.

When you reach such a position in your game, there is absolutely no way to tell whether you should continue playing for a win or agree to a draw. White's king is exposed on d3 and it could quite be possible that there is a way to mate him. On the other hand, you should also realize that the pawn on e6 is quite potent and Qh6 is coming up next so it is no going to be easy. It is a moment where chess becomes really difficult. Vantika went ahead boldly and played... 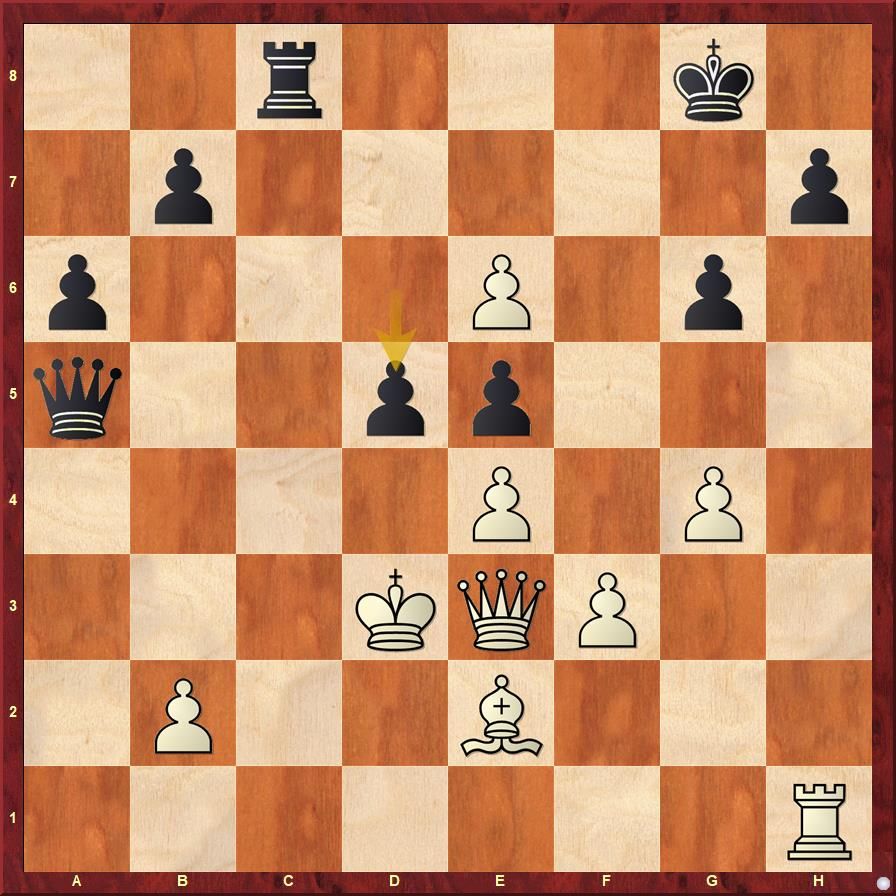 ...d5. Her point was simple. If White went Qh6 which is the most natural move then she takes dxe4 and then after fxe4 Qd8+! ends the game! But what she didn't notice was... 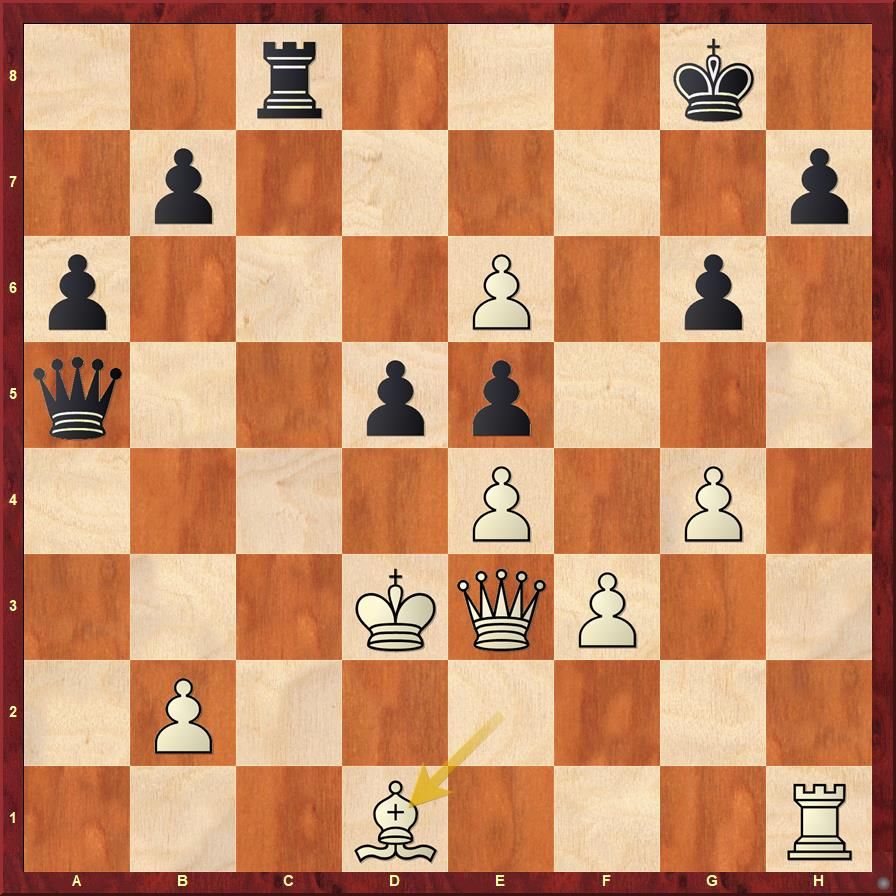 Priyanka's sly move Bd1! Full credit to the youngster for finding this very important move under pressure. The king is now given a luft on the e2 square and the bishop controls the all important c2 square.

Vantika's bravery went unrewarded as she slumped to a defeat. 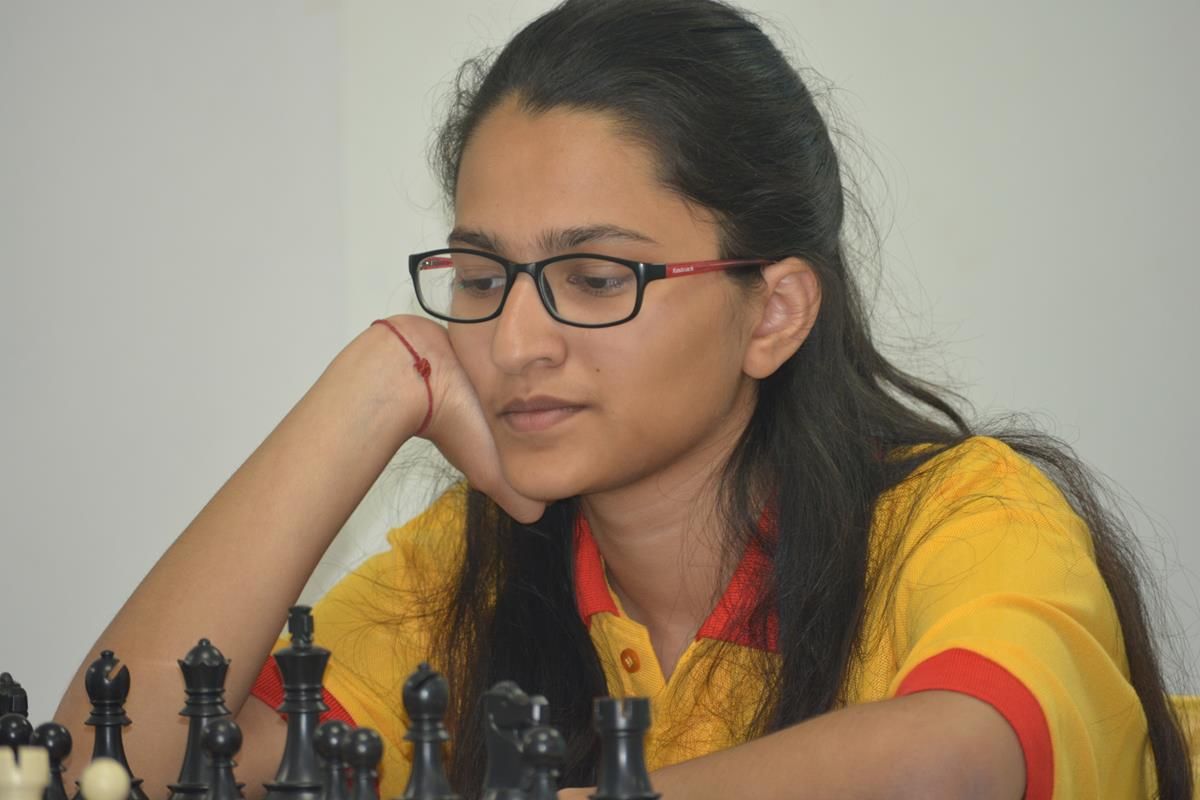 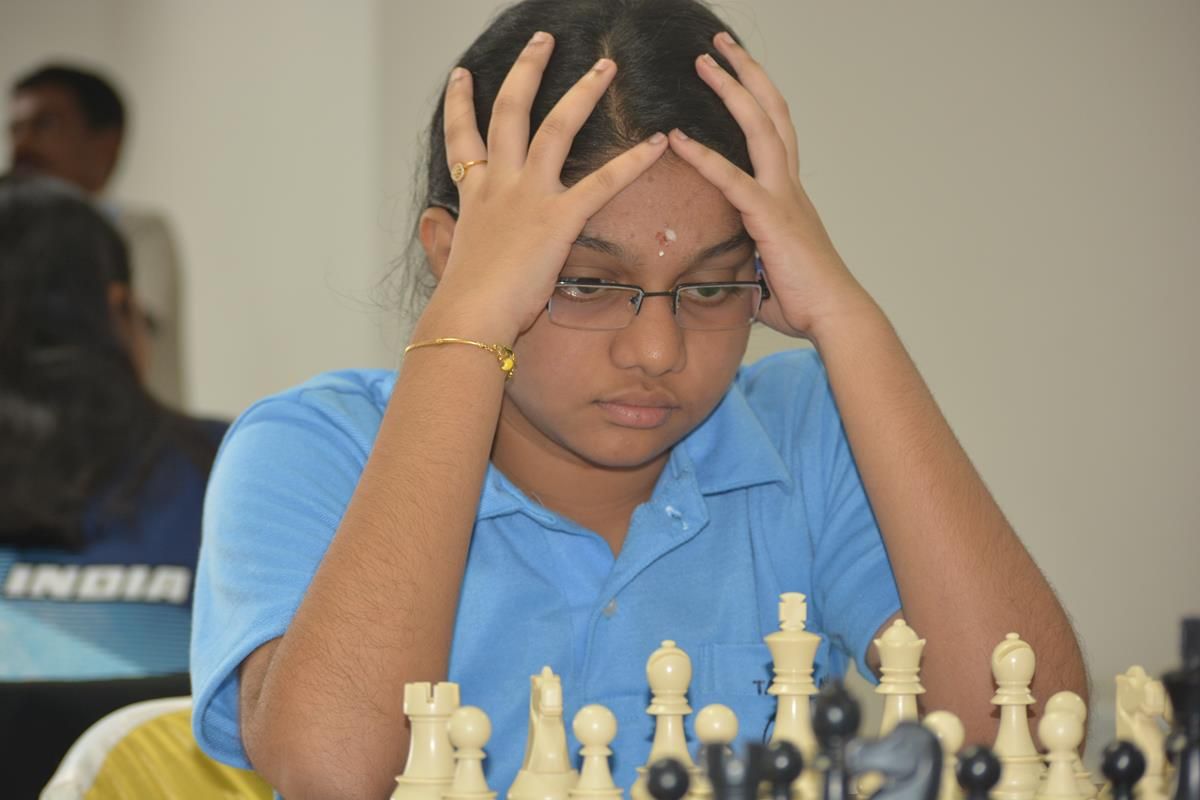 Priyanka is now in joint second position along with Vantika on 7.0/9 | Photo: Gopakumar Sudhakaran

While all other players are making errors, there is one super woman in the tournament who just isn't going wrong. In cricketing terms Bhakti is a batsman, who is seeing the cricket ball like a football! In chess term, she is able to keep a close watch on all the tactical and positional moments and is making the right deicisions. In a nut shell she has mastered the art of playing consistent chess. She is on 8.5/9 and has a 1.5 point lead over the field. 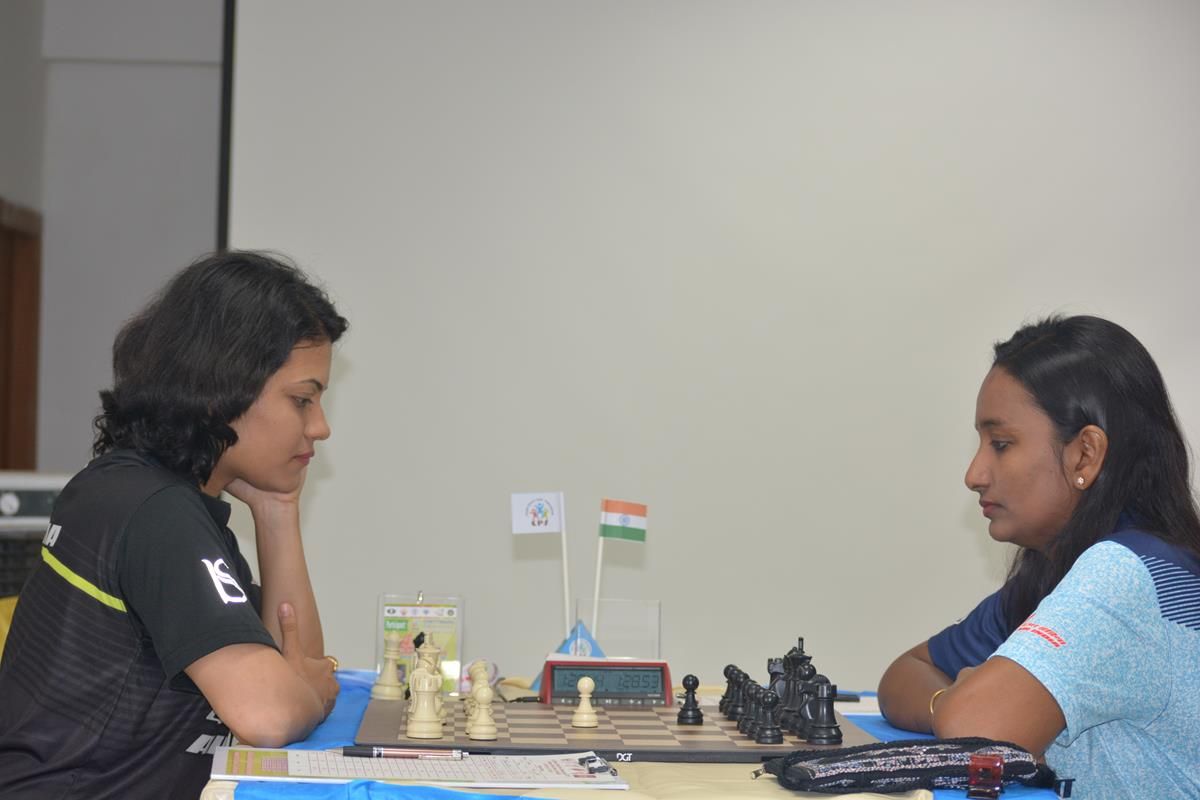 Bhakti's scalp in round 9 was Meenakshi Subbaraman | Photo: Gopakumar Sudhakaran

Bhakti is essentially a 1.d4 player. But recently she has begun playing 1.e4 as well. This open mindedness has helped her breach 2400 Elo mark, become an IM and also lead the 46th national championships in such dominating style. Against Meenakshi's Pirc, Bhakti played solid chess, took the centre and managed to win without any real hiccups. 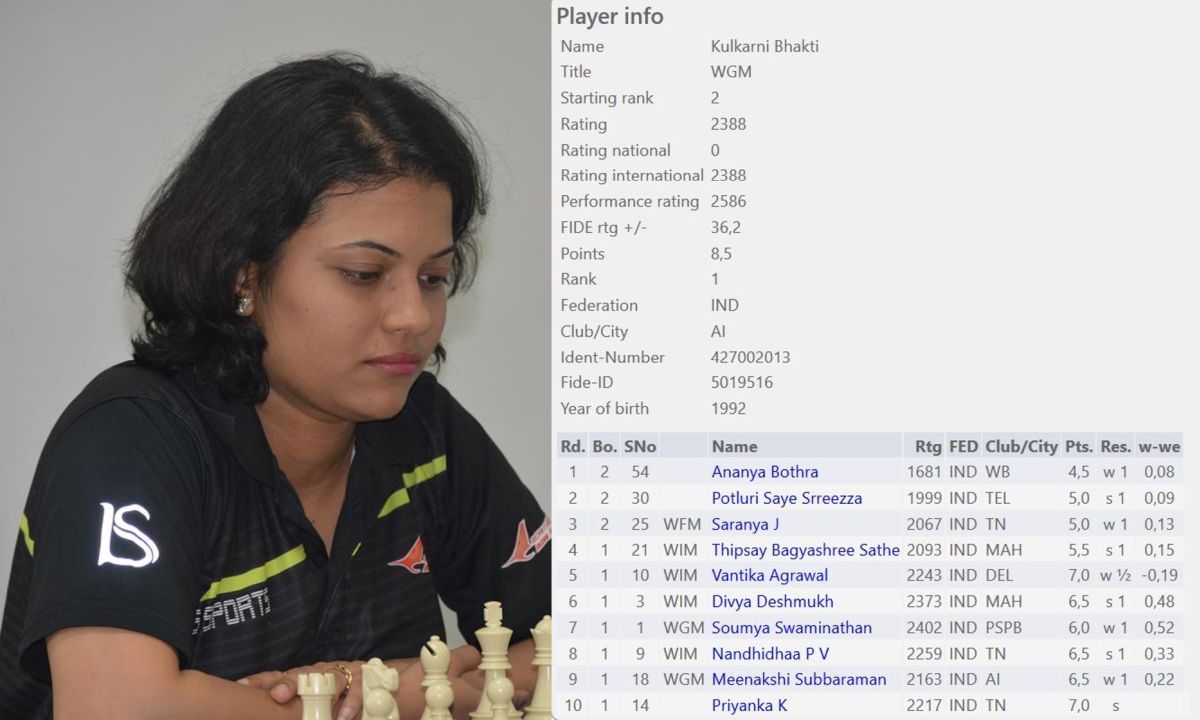 To have a performance of 2586 is simply unbelievable! As Bhakti has never crossed 2400 on the published Elo list, her k-factor is 20. So she is gaining 36 Elo points from the event. If she continues in this fashion she might go back with over 40 points gain! A tremendous performance. | Photo: Gopakumar Sudhakaran

With 1.5 point lead in the tournament, is it all over? Well, the onus today is on K. Priyanka's shoulders. The youngster from Tamil Nadu, who recently made her IM norm at the 2nd Goa GM International and won the gold in Commonwealth girls under-18 is known to be a giant killer. It is highly possible that she can create the upset of the tournament. Also note, both the players have highly contrasting styles. While Priyanka loves to attack, Bhakti is positionally oriented. This makes the game even more exciting. 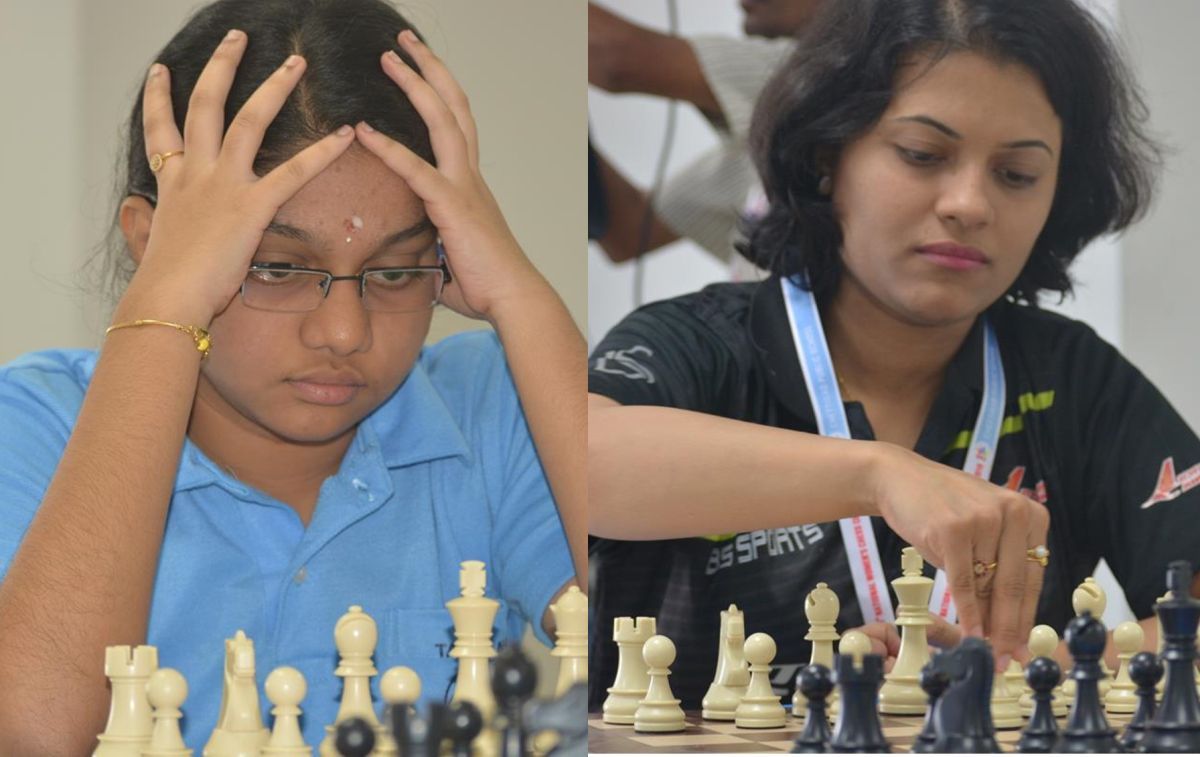 The live game begins at 10 a.m. IST on 26th of July and you can follow it move by move here.