Team India won a historic Gold in the FIDE Online Olympiad on 30th August 2020. Little did anyone could have fathomed that Team India's quest for Gold would not end on the very same day. Receiving and sending the medals to all players was a challenge the Vice-Captain of the Indian team, GM Srinath Narayanan was up for. He had endured electricity, internet connectivity, team management and various other stuff so this one also he handled very nicely. Srinath kept mentioning that receiving the Gold medals as soon as possible and dispatching it to the players to make sure they receive them quickly was always the priority. Find out how the 'Wise-Captain' tackled a Gold challenge even after the conclusion of the event. Photo: ChessBase India 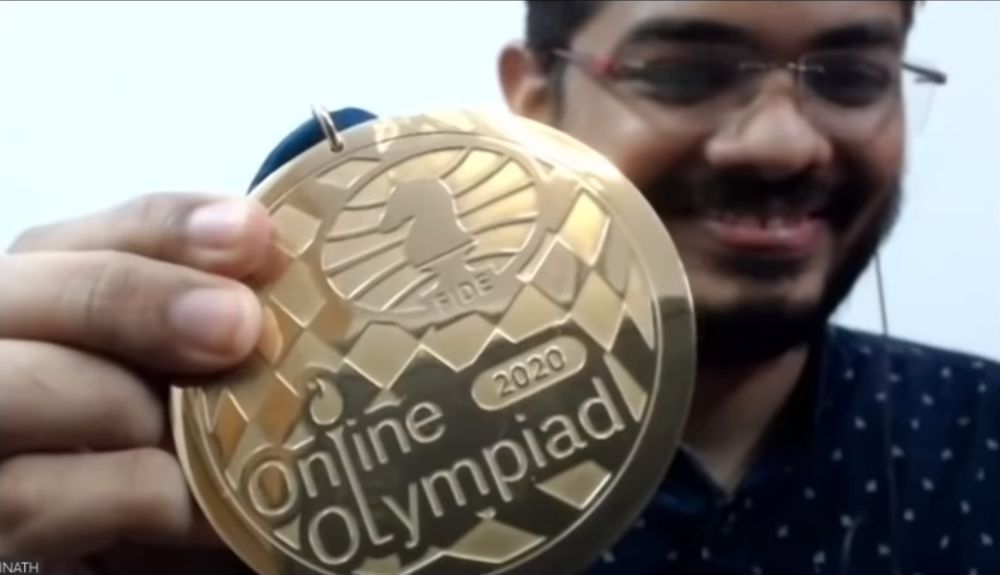 On 2nd December, Vice-Captain of the Indian team at the FIDE Online Olympiad, Srinath tweeted:

IM Sagar Shah did an interview few hours back where Srinath shed light on the situation.

Sagar Shah (SS): Indian team did win the Gold medal along with Russia but getting that Gold medal was not easy. What happened?

It went to London and directly to Bangalore. It came around 22nd or 23rd. 23rd I can certainly recall. Then it just kind of stopped moving. The tracking, it kept staying on clearance. On 24th I was contacted by DHL asking me to write a letter stating the type of metal that is in the shipment. I thought it was a bit unusual.

SS: You got it from FIDE?

SS: Why they would be able to explain better?

SN: They both graduated in chemistry. (both smile).

SS: So basically the Gold medal had different composition. It didn't have gold in it, but had all the other elements.

SN: Even if it did I am not sure, how much of it is in ratio technically. But as I understood, as far as I knew it didn't contain gold or silver. I could be wrong of course, I am not an expert in chemistry. Even then there was no response from DHL after that you know. After I sent the email stating that this is the content, they did not communicate back. They did not respond. Then I tried to reach the Bangalore customs. They said it hadn't come to them but if it comes they will pass it through.

For a few days there was just no movement. At that time, I think it was also the cyclone coming in Chennai 25th-26th. 26th was the day of the landfall. 27th also went through. Finally after a couple of days I think around 30th, there was some movement. The shipment went from Bangalore to Chennai. So I was happy thinking that finally okay I am going to get this.

On the 1st December, I got an email when I woke up having an invoice of the customs duty. By this time it had already been a week. When I saw this invoice, I didn't think about contending it or explaining that this is a Gold medal that should be exempted or any such things. I thought it had already been delayed for such a long time. I had to get the medals and dispatch it as soon as possible.

Already a week ago I had gotten addresses of all the players and prepared to send it as soon as it came. I thought they had waited for three months, they had to get it as soon as possible. So when I saw this invoice, I thought you know I will just pay this right away, get the medals first and then I will send this medal by courier and then we will get to this.

SS: You paid around ₹6300 because you were tired of exchanging back and forth, trying to explain them what was happening.

SN: Yes that was one thing, second thing was my absolute priority was to get the medals as quickly as possible and have it sent to each of the players. Everything else took a backseat.

FIDE, when they sent this shipment from Russia, they were apparently warned by DHL that there might be some additional fee that they may have to pay. FIDE told me if any such thing happens then FIDE will be happy to reimburse it for compensation. So perhaps they anticipated some delay, they anticipated this, but I honestly didn't think that it would take such a long time or I would be finally sent an invoice. I honestly thought it would be cleared much faster.

SS: There was this some rule by the government that there is a notification which says that these medals are exempted from customs duty.

SN: Yes it seems so that there is such a rule. There is such a notification but again you know if I did contend this at the time of receiving this, I feared that it might take another few days or perhaps even a week for again DHL writing to the Customs and Customs getting back. I thought these things should after the medals are sent.

SN: DHL Express contacted me today. They issued an apology and they apologized for the inconvenience. They said there was some miscommunication perhaps internally or between them and customs. They promised to issue a refund within 10 business days and they also ask me for certain documents which I have emailed and also couriered it already to reach them.

SS: So now all the medals have been sent to the players?

SN: Yeah I think all the medals have been sent to the players. I think it has reached almost seven or eight of them. Tomorrow it will reach most of them, maybe Bhakti might get it at the last because I saw there was some network delay to Goa.

SN: Yeah 13 medals and the certificates.

SS: That is tremendous. What's your overall thought about this? I know that you are a very calm individual and very objective person but do you think that this lapse could have been avoided in general because finally it's a huge event that Team India won. More than 150 countries participated. It was huge winning the FIDE Online Olympiad. As you said, Rajya Sabha had mentioned it, Prime Minister tweeted it. It was all over the news.

SN: The individual case itself is not such a big deal I think but how the mechanism works, I think this reaching such attention levels can certainly make it quicker and easier the next time such an instance occurs, not just in the case of chess but any sporting medal, anything won which comes by courier or if it comes directly, if a player is directly bringing it to the airport, whether it comes by shipment. I do hope the mechanism becomes much smoother in the future. I hope that's the main positive thing that comes out of this.

SS: Srinath do you have your medal with you right now?

SN: Srinath brings the medal from his living room and shows it to the audience.

SS: I would say it's one of your most memorable piece of artwear like what you will have in your house.

SS: Well Srinath you worked tremendously hard for it right from Day 1 with all the electricity issues, the team planning, team management, helping the team in every possible way, internet disconnections and all of this. You thoroughly deserve this. Till the end it was not easy but I think this puts an end to this entire episode and congratulations once again for achieving this great feat.

SN: Thank you Sagar, thank you so much.