The IV Sunway Sitges International Chess Tournament officially ended on the 23rd of December 2017. But the memories will still linger on. Aravindh Chithambaram's victory was the highest point of the tournament, while side events made it special. For Aravindh the year has ended on a high. He very nearly won the National Premier, secured a bronze at the World Junior and now clinched the gold at this super strong open event. What's more the boy will be 2600 on the published rating list on 1st of January! A pictorial report with loads of videos, games analysis and more by Avathanshu Bhat.

What a fantastic feeling when you are in foreign lands and your own country star player wins the tournament! GM Aravindh Chithambaram yet again showed his supremacy by winning the Sunway Sitges International chess Festival 2017 and received a trophy and a cash prize of 5000 euros. The tournament was not an easy cake for Aravindh to slice. With the 26 GMs and 35 IMs it was a very strong event.

It all hinged on the final round encounter between Aravindh who had the white pieces and Zdenko Kozul. Last rounds have not been Aravindh's forte in the past. But the youngster from Chennai is fast improving. After his last round debacle against Debashis Das at the National Premier 2017, he came back strongly to win against Xu Xinagyu and clinch the bronze. At the Sunway Chess Festival, this is how things looked at the start of the final round:

There was a pack of hungry ten players on six points waiting to pounce on Aravindh and Kozul in case they made a draw. However, the Chennai lad was not going to have any of these complications. He played a fine game of chess, sacrificed a rook towards the end and checkmated the black king! With it, he was able to take the sole first spot at the Sunway Sitges Chess Festival 2017. 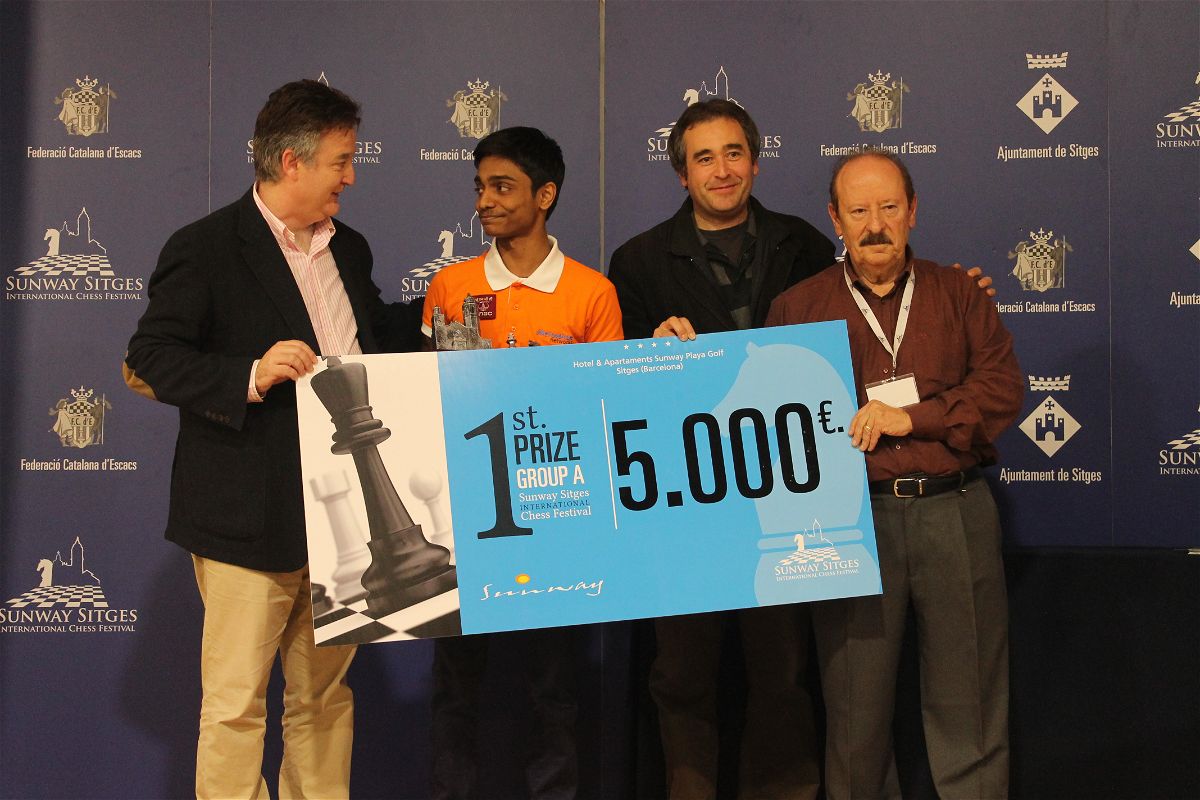 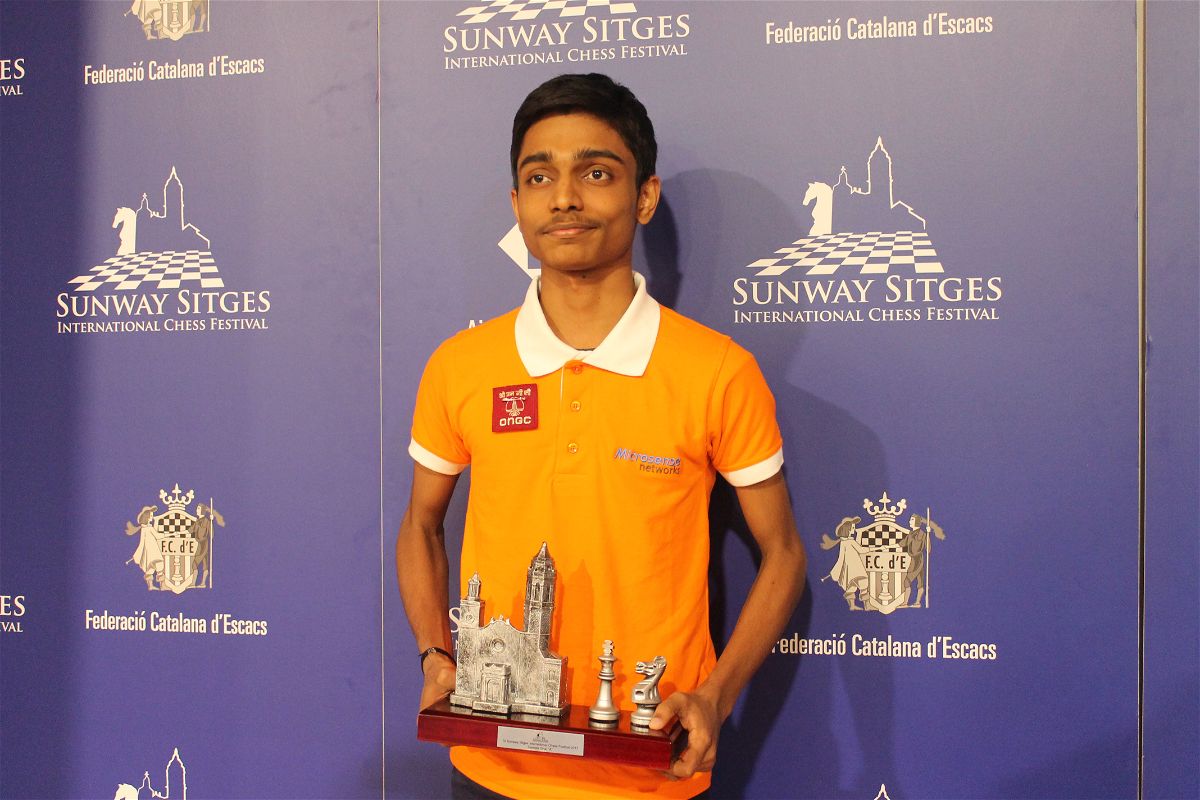 With this win Aravindh also crossed 2600 Elo mark! By the way, we really love the trophy!

Take a look at one of his games against GM Alexander Motylev. It shows one of Aravindh's biggest qualities as a chess player. He doesn't really care about edge in the opening. He readily takes a slightly inferior position out of the Sicilian Taimanov and then makes it very difficult for his opponent to make progress. When Motylev loses his patience in time pressure, Aravindh converts it into a full point! 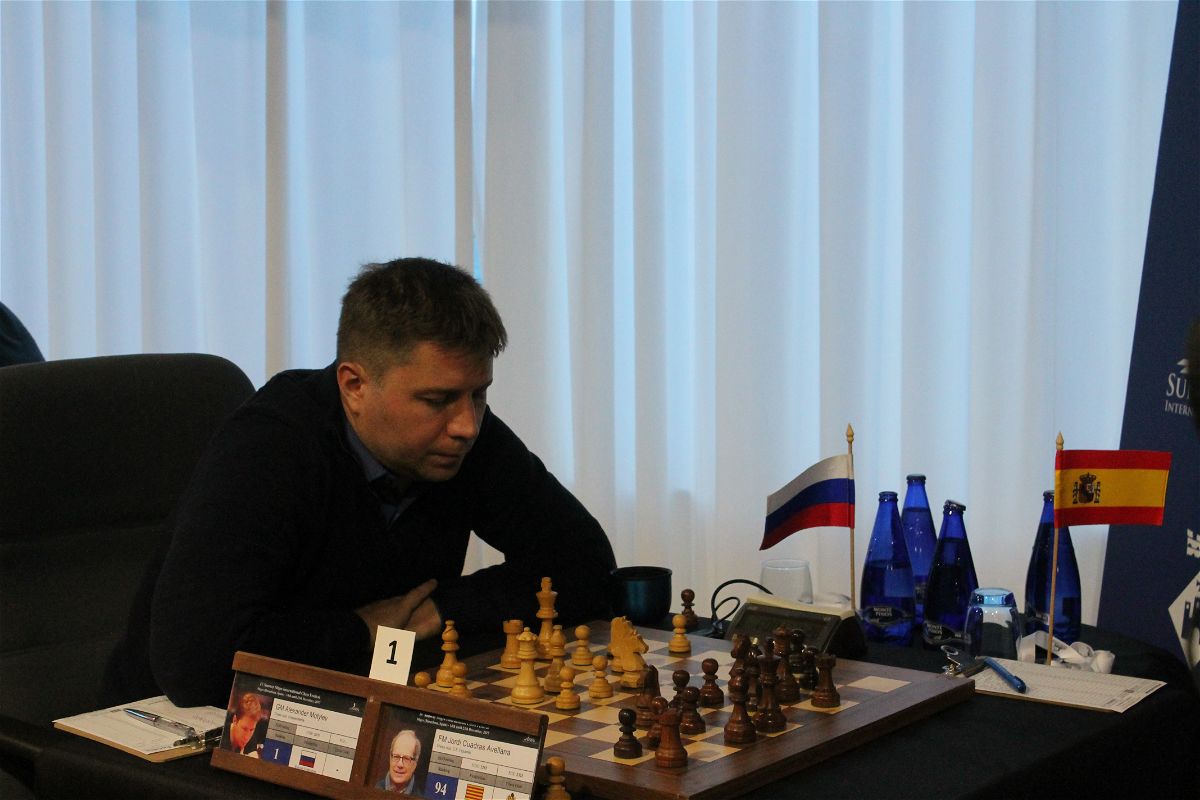 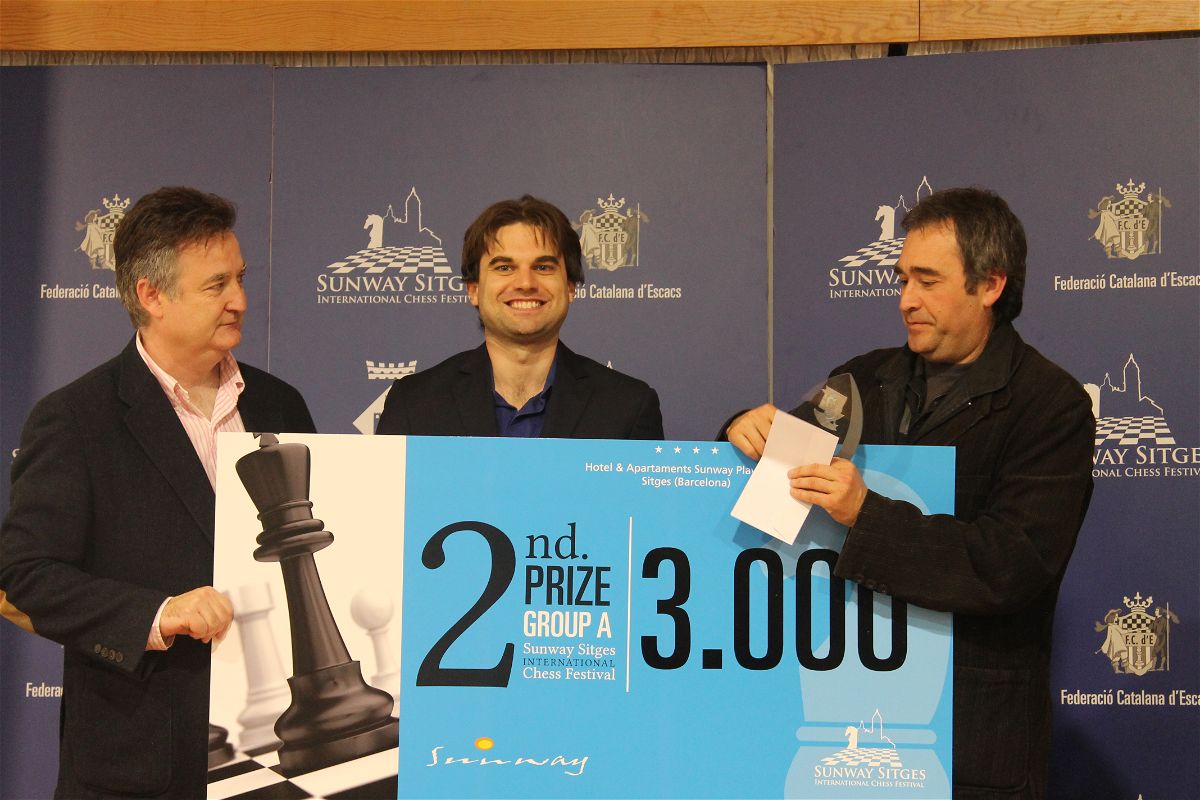 The second place went to the jubilant GM Samuel Shankland... 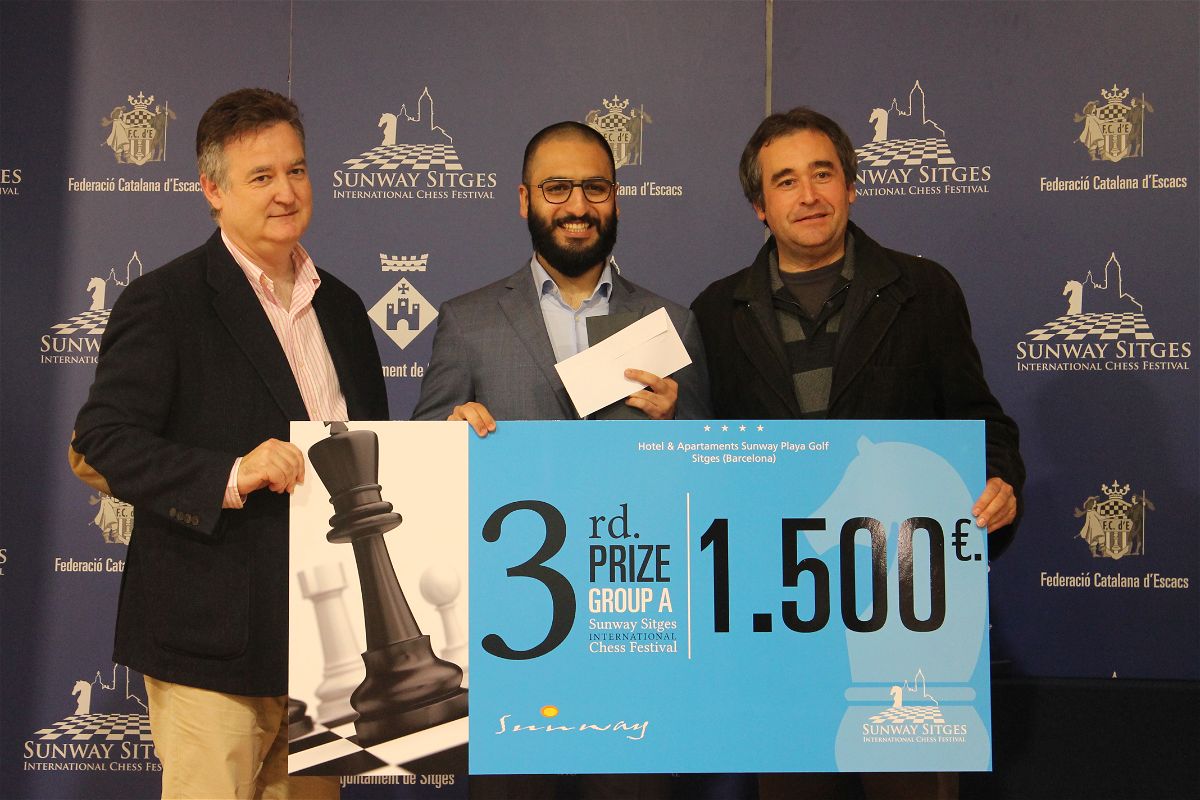 ...while GM Saleh Salem followed suit with the third place. 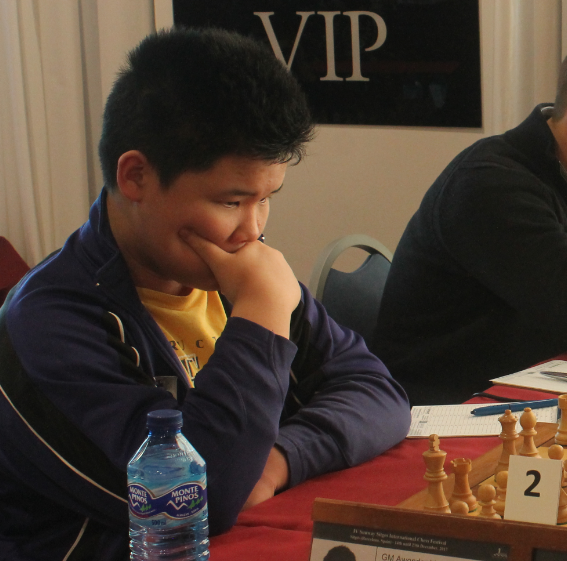 The much talked-about GM Awonder Liang had a tough time fighting his ill health.

However, Awonder took the time to join me for a short interview. What a matured message from a young GM!

Should I call you a sir or a buddy!

IM Aman Hambleton from Canada managed to get his third GM norm and has now joined the elite Grandmaster club. He is known for being a very stylish man, due to his hair and beard. But it turns out there is a story behind it. Find out by watching this interview:

Aman Hambleton reveals the secret of his long beard!
It's always fun catching up with Tania Sachdev 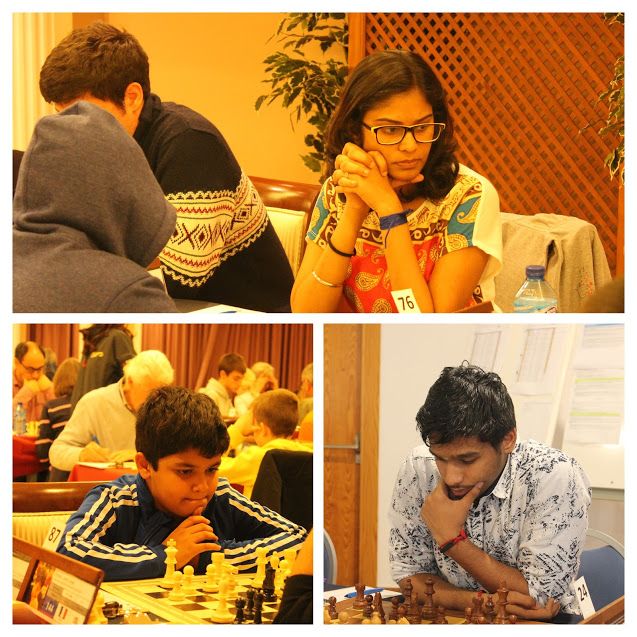 Raahul V S(bottom right) and Dev Shah(bottom left) increased their ratings, while Nandhidhaa(top) missed a WGM norm by a whisker 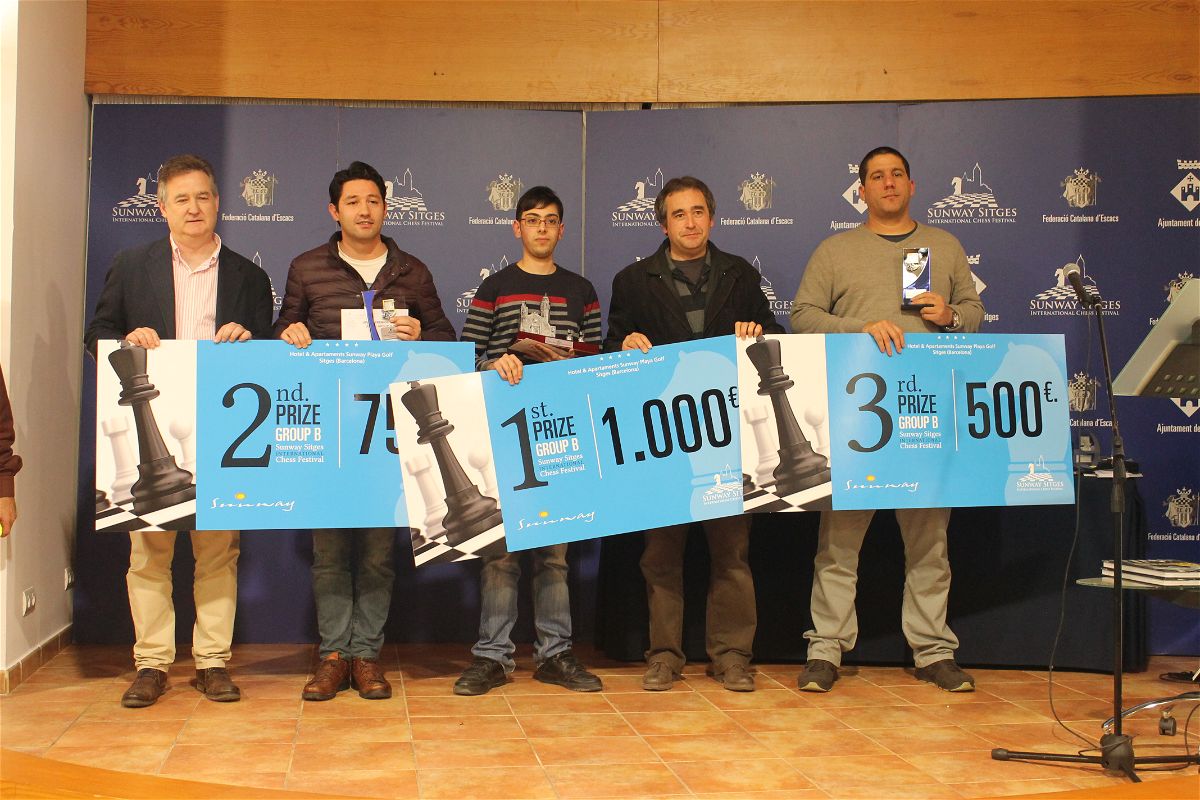 Here is an interesting game of Nadal Fajardo Ricard (the eventual winner) against Costav Trave Jaume:

What Sunway Sitges means to me:

Sunway Sitges International Chess Festival is not just a chess tournament. It was a carnival for all chess players, lovers, parents, kids and entertained everybody. The organizers have taken this tournament to the next level. Be it free bicycle rides, the wine tasting, tapas workshop, conferences by various GMs, simul events and of course, the brilliant night blitz, everything was done very tastefully. 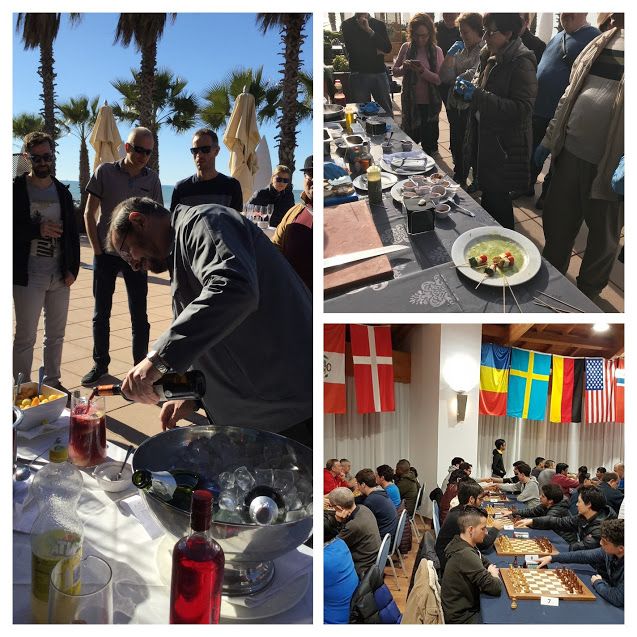 Everything had grace and a flow to it. The immaculate timings, the exquisite playing hall and the amazing analysis room and the ever-smiling staff will always be close to me. The tournament ended on a sweet note with everyone being gifted with a large cake, and a box of chocolates all encased in sweet memories. 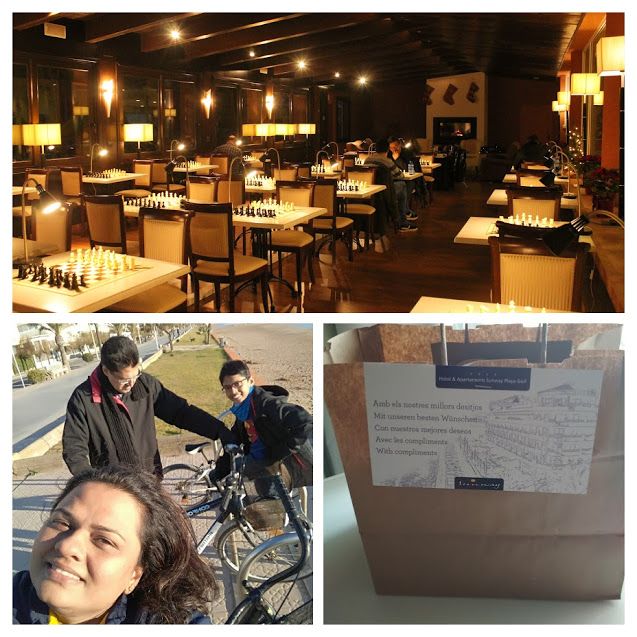 The analysis room(top), the generous gift(bottom right) and the family entwined in bicycles (bottom left) are all things I won't forget!

The organizers said that the purpose of the Sunway Sitges International Chess Festival is to have everyone leave with happy memories. And believe me I think they have done just that. On a personal note, this was my first time as a reporter while playing in a tournament. ChessBase India gave me a huge responsibility, and of course they were there at the other end for the support I needed.

Meeting strong players from all over the world, interviewing them, the organizer, trying to learn the culture and language of a new place is certainly a great experience. I met Hagen Tejo and Frans Roes from Netherlands who are very interesting people, and are both writing books, the former on chess and the latter on science. 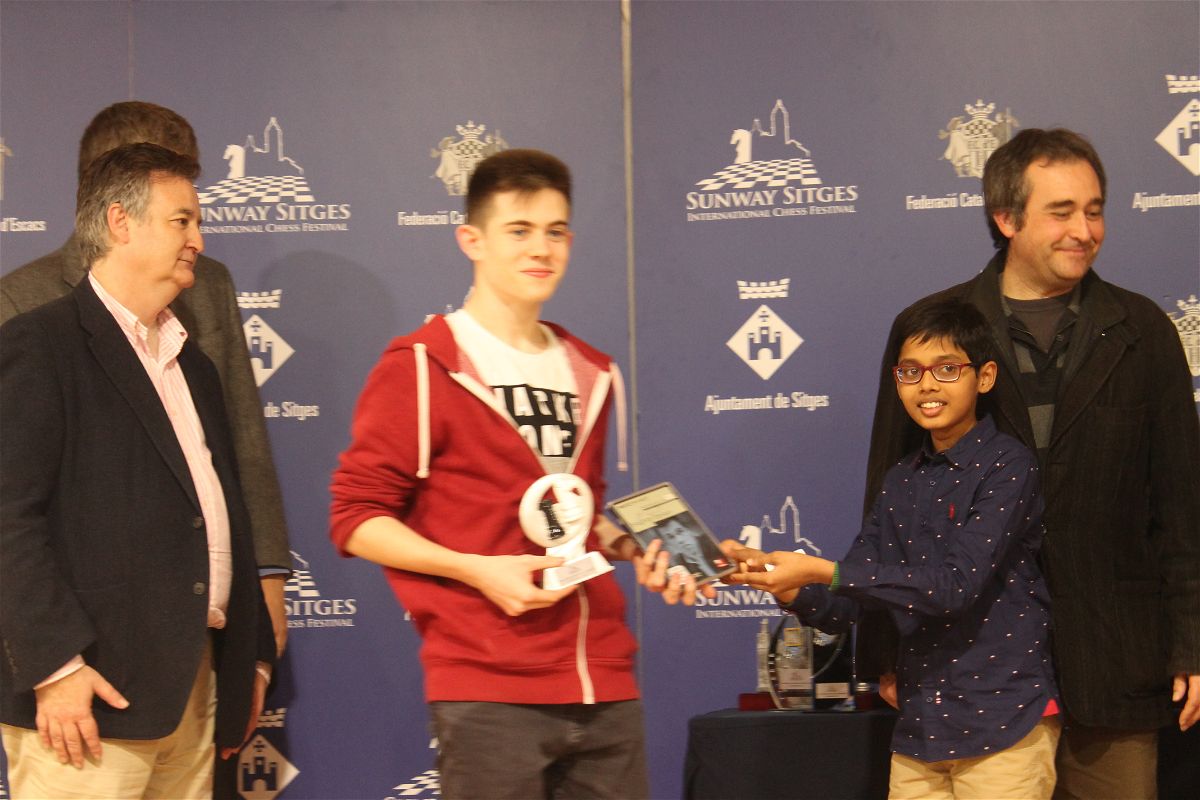 Prize being given to the Under-16 champion by yours truly! A Magnus Carlsen master Class DVD signed by Magnus Carlsen himself (It was signed by the World Champion at the World Cup 2017 where ChessBase India founders Sagar Shah an Amruta Mokal were present)

Chess has discovered new horizons to me, and gives me the wings to fly. 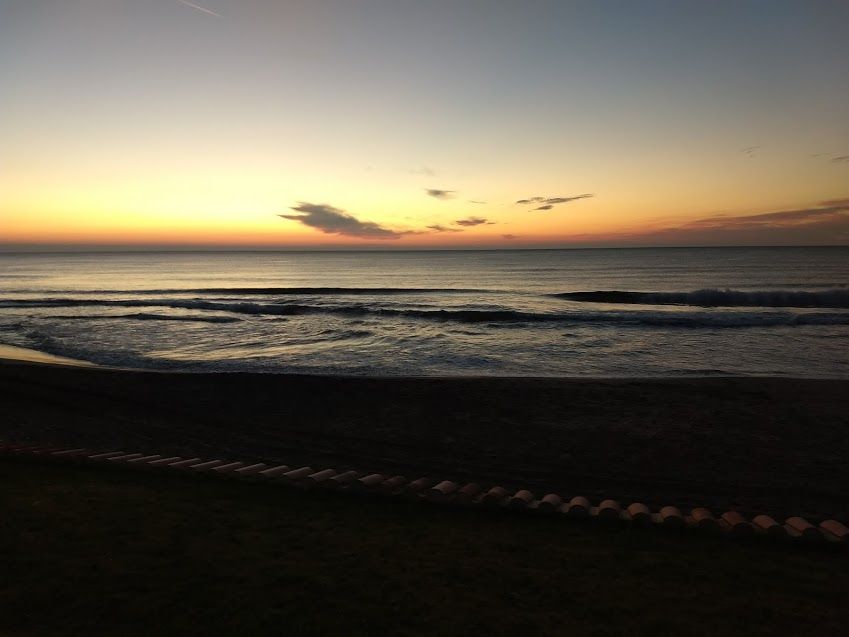 Sitges, you will be missed until next time!