Catch up with all the action of the London Chess Classic with the one and only, GM Adhiban Baskaran! Round two onwards, Adhiban will be analyzing all of the games from the London Chess Classic for our readers. So all you've got to do is tune in to our website a day after the round concludes and find Adhiban's insights right there! Here's his analysis on the games of round two!

Adhiban Baskaran is known to be one of the most jovial personalities of the contemporary Indian chess scene. His chess achievements need no introduction. Rated 2655 currently, Adhiban has represented India at several Olympiads and has been the World U-16 Champion back in 2008. His most known recent success was at the Tata Steel Masters tournament where he finished third with a score of 7.5/13, beating players like Radoslaw Wojtaszek, Sergey Karjakin, Richard Rapport etc. 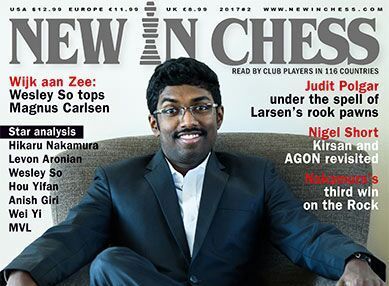 Adhiban featured on the cover of New in Chess!

But besides being the fifth strongest Grandmaster in the country by rating, he's a passionate aficionado who would love to share his insights with our readers. And what could be a better opportunity to do this than during the London Chess Classic, a tournament where the Indian chess legend, Viswanathan Anand will be taking on some of the very best in the world! So round 2 onwards, Adhiban will be annotating not only Anand's games but all the games of the round for our readers. Do join in and savour the insights!

Wesley So vs. Ian Nepomniachtchi