The 26th Abu Dhabi International Chess Festival has begun and the Indians participating have already created a stir as in round-1 itself Antonio Viani, Divya Deshmukh, and Raahil Mullick got the better of their opponents rated 300 points above them. The masters tournament of the event is a nine round Swiss restricted to players with FIDE rating 2100 and above. The Indian contingent of 76 players (total participants are 151!) is led by World Cup qualifier Murali Karthikeyan and National triple-crown champion Aravindh Chithambaram who have starting ranks of 14th and 15th respectively. In this report we bring you the glimpses of first round's action through the photos sent us to from the venue by Rupali Mullick, analyses, and more.

The Abu Dhabi Masters 2019 has begun from the 2nd of August 2019. There are three tournaments that will take place - Masters (above 2100), Open (below 2100), and the Juniors (under-16). In the masters section we have 151 participants and 76 of them are Indians! Wow, over 50%. There are only four UAE players taking part, but it's also because there are only nine players in the country who have a rating of above 2100.

Abu Dhabi is just a three hour flight from Mumbai. Thanks to this ease of travel a lot of Indians make it a point to visit the tournament to fight for norms and a chance to play against some of the best grandmasters in the world.

One must also not forget that the Abu Dhabi Masters is one of the exposure events for the national junior and sub junior team of India that is sponsored by the Government of India. The other tournament earlier this year was the Aeroflot Open. It is also because of this reason you find so many Indians taking part.

The tournament is taking place in Hotel Sofitel and it will be a nine round swiss event. The time control is 90 minutes for the entire game with a 30 seconds increment for each move from move one. There are players from 28 countries and 48 out of 151 players are grandmasters. Top seed of the tournament is GM Yuriy Kryvoruchko (2686) and there are 17 players above the Elo of 2600. The first prize in the masters section is US $13,000. 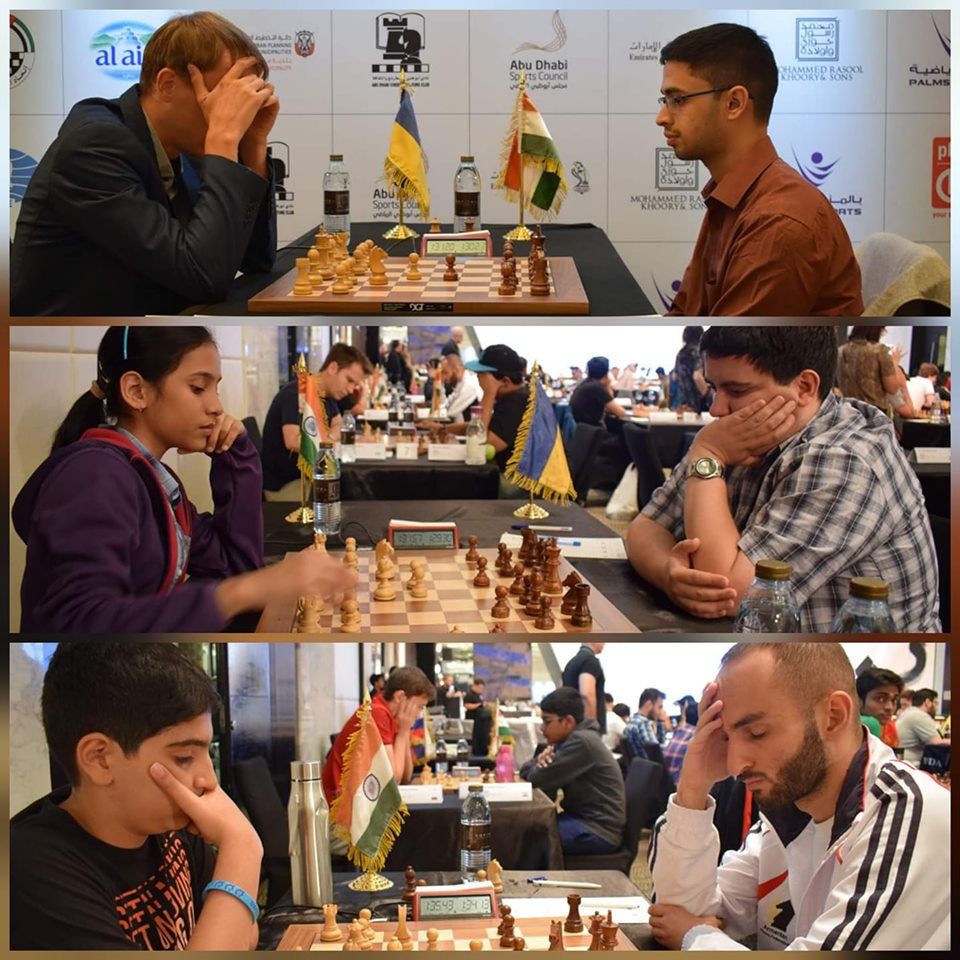 Yuriy Kryvoruchko (2686) opted for a rather dubious way of play in the Spanish, recklessly pushing pawns on the kingside and weakening his king to grab material. International Master Antonio Viani Dcunha (2371) with the black pieces was in his very element as he punished the Ukrainian Grandmaster's impetuousness with his calm, confident objectivity. Thus, carrying out one of the biggest upsets of the day. 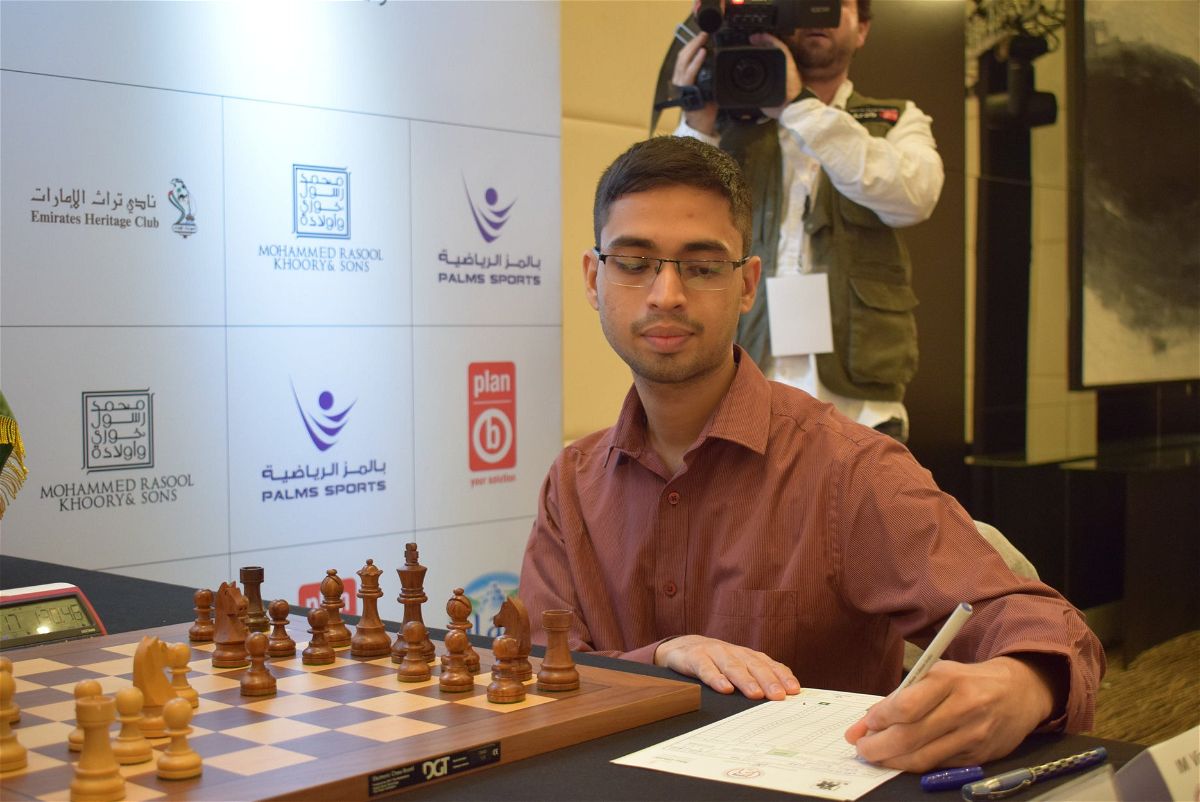 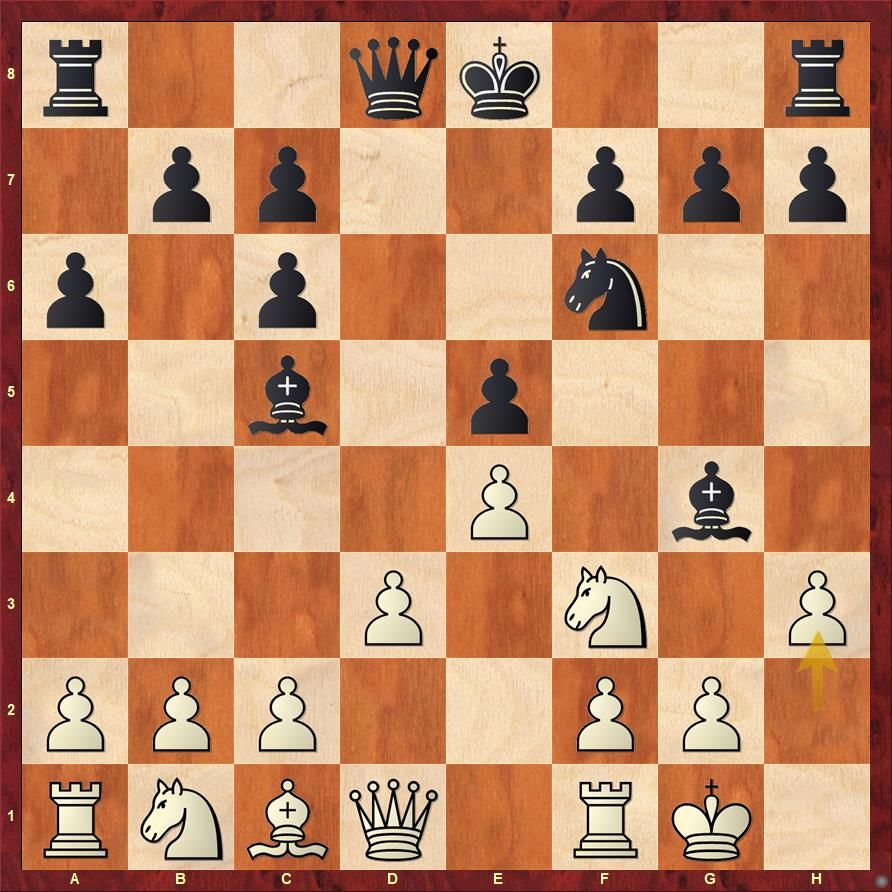 Position after 8.h3: Black can exchange off his bishop with the knight here with 8...Bxf3 but in the game Antonio chose to keep his bishop pair and went 8...Bh5 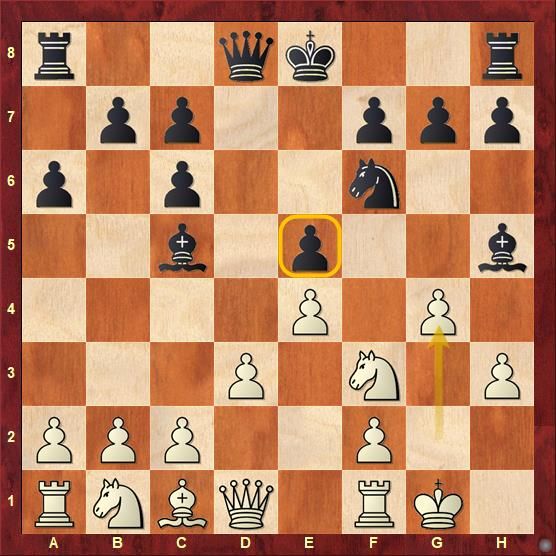 It is very tempting to be materialistic when playing an opponent rated 300 points lower than you. White immediately lashed out with 9.g4 to pick up the e5 pawn! 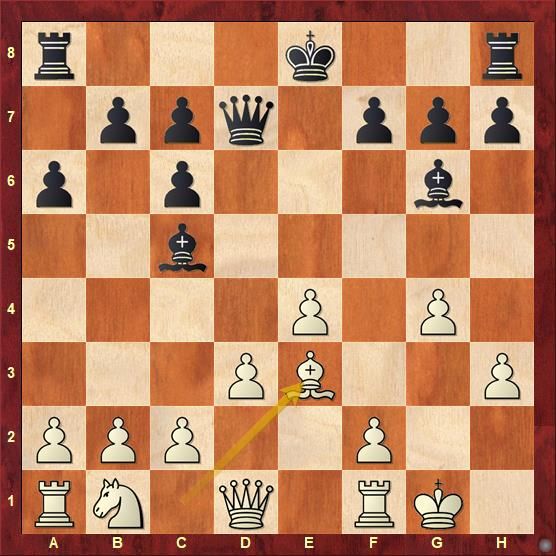 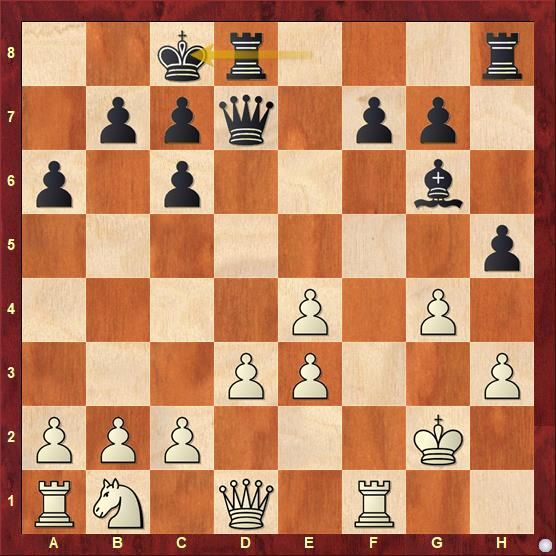 Position after 14...0-0-0: Although Black is a pawn down, White's exposed king gives him excellent chances. 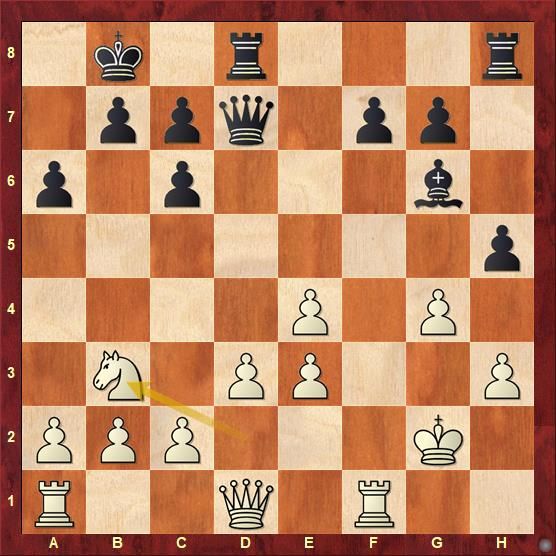 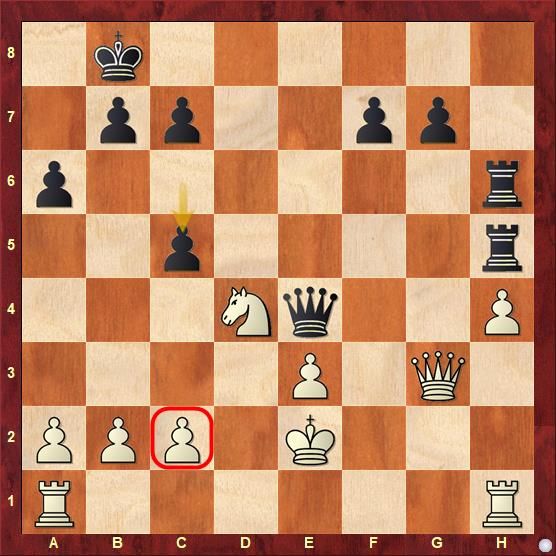 Position after 24...c5: Black's forces were all over the white king.

A clinical execution by the Bengaluru based International Master! The full game with brief annotations is presented below: 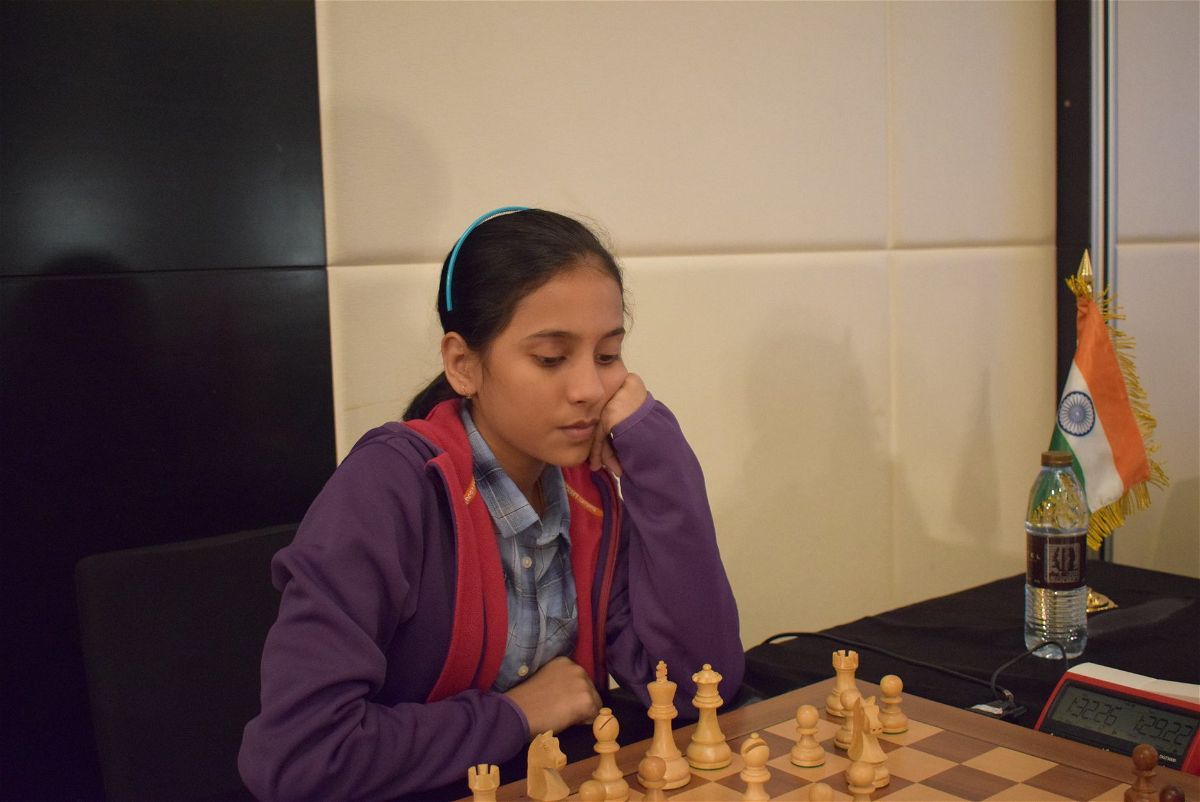 Divya Deshmukh ended up in a worse position against her opponent Vladimir Onischuk but the tables were turned in a span of just two moves when the latter suffered from an inexplicable brain fade! | Photo: Rupali Mullick 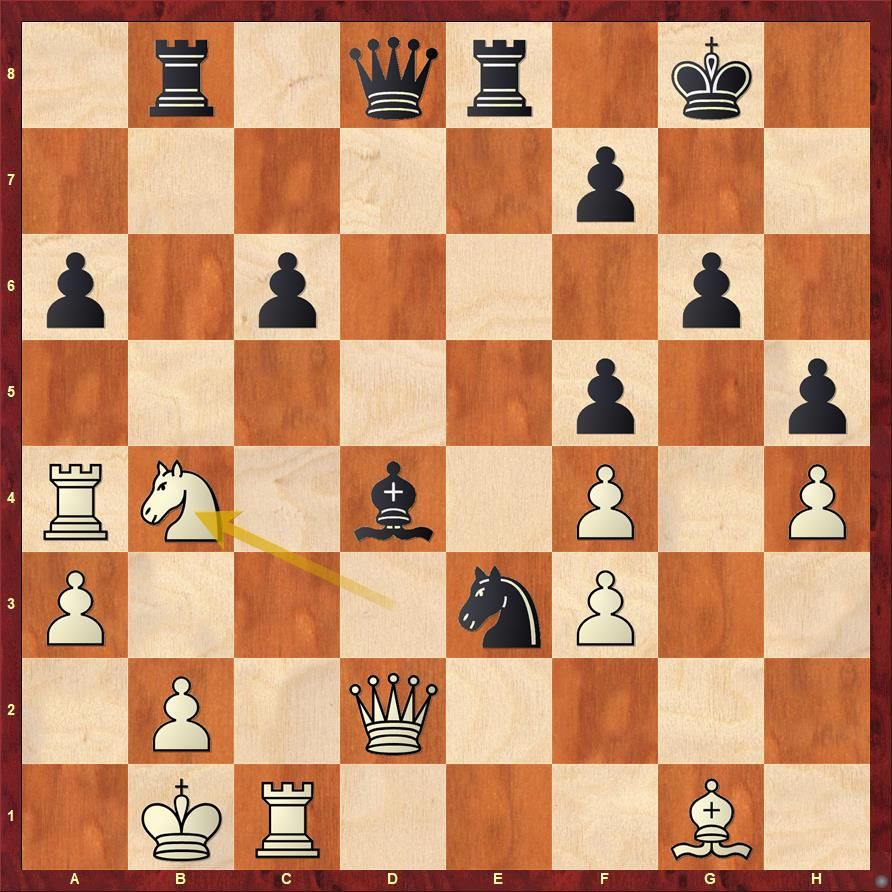 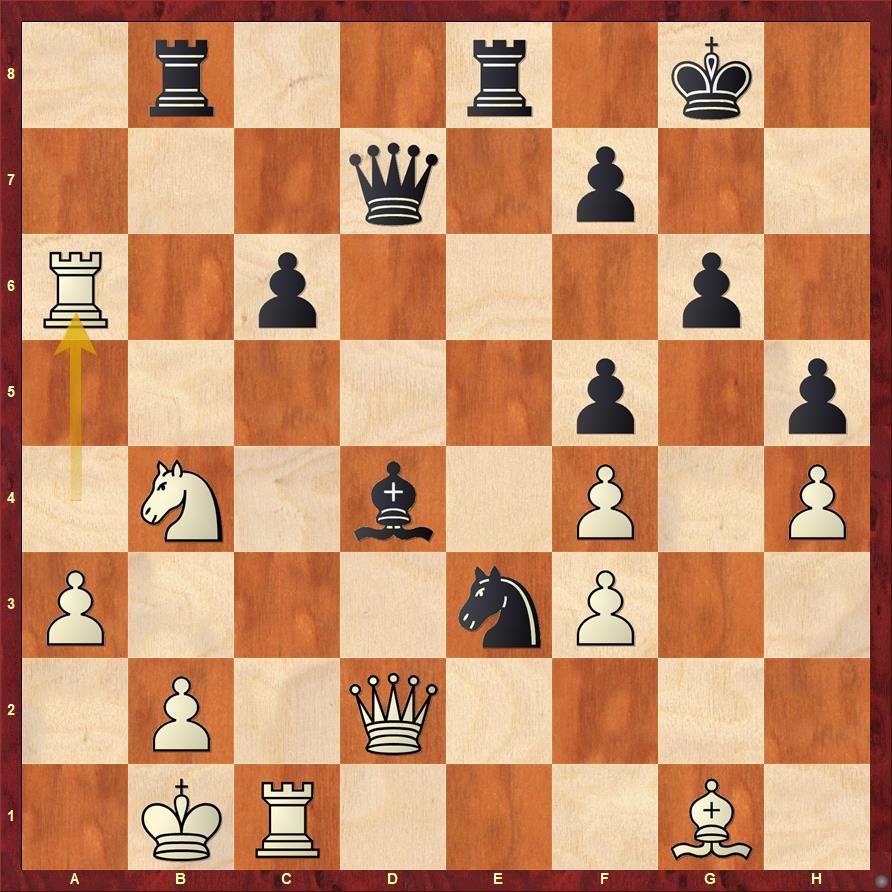 Once again, 30...c5 would have been Black's best chance, the point is after Rxc5 Rbd8 Bxe3 Bxe3 Qxd7 Rxd7 Black has good counterplay. However, in the game Onischuk played the abysmal 30...Re6 and this irrevocably sealed the fate of the game. After 31.Raxc6 Rxc6 32.Rxc6 Rxb4 33.Qxb4 Qxc6 34.Qxd4 White was clearly winning with the two extra connected pawns on the queenside. 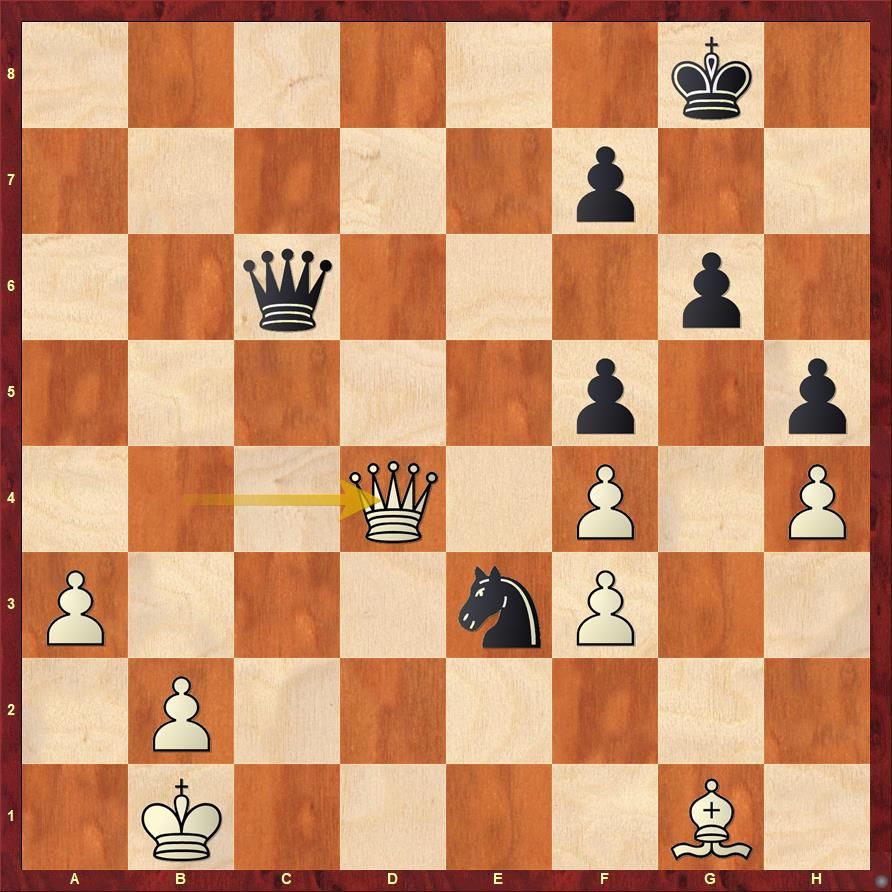 Position after 34.Qxd4: White's pawns are ready to roll down the board unrivalled, Black simply has no counterplay. 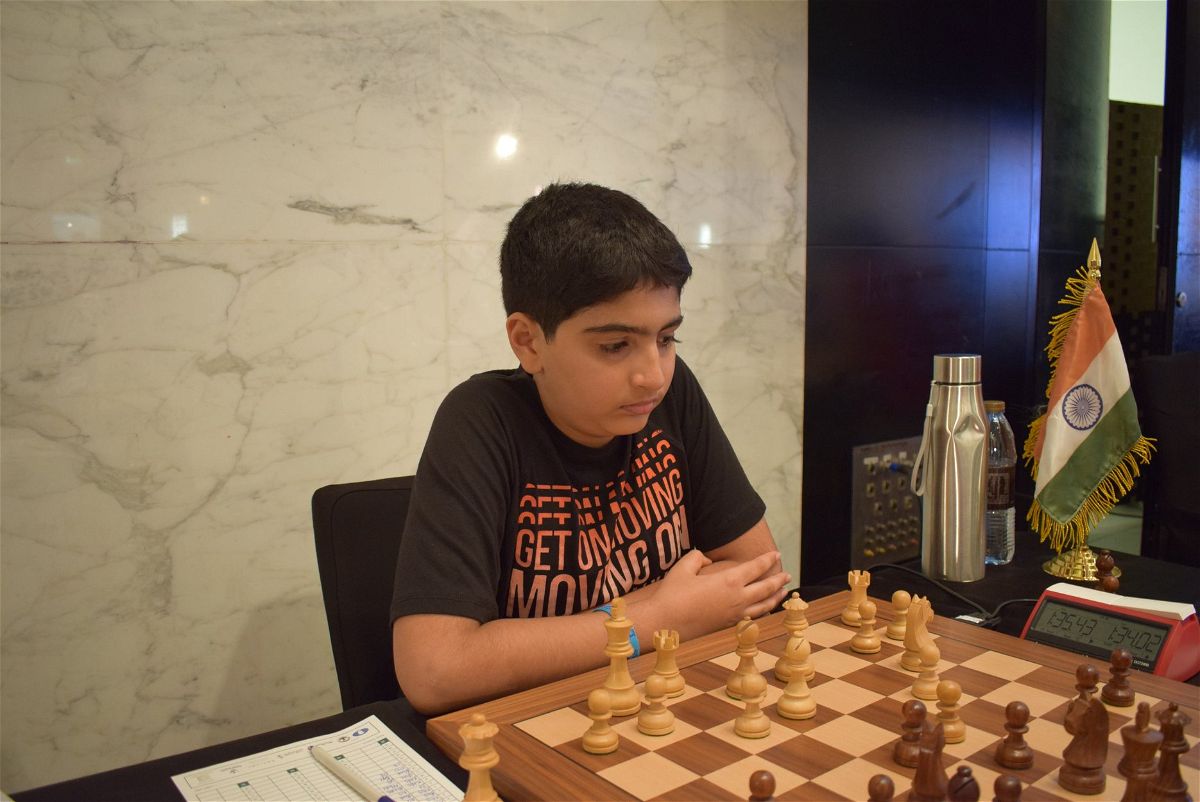 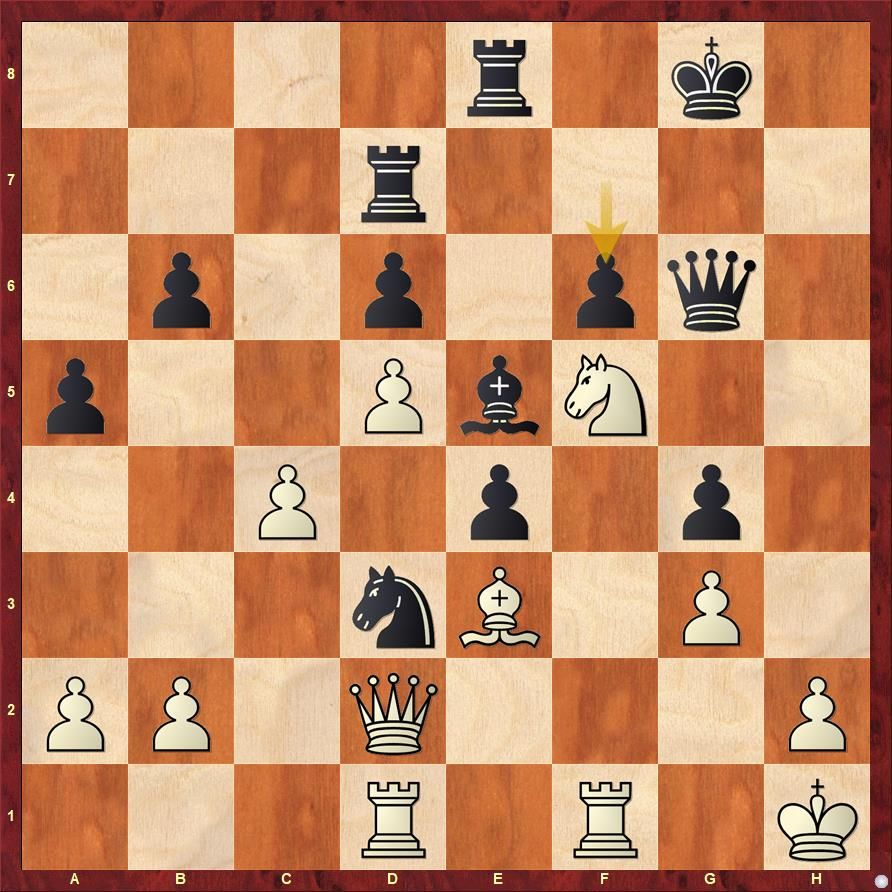 White's position was already discernibly better but 27...f6? only quickened matters. Raahil found the crushing way ahead with 28.Nh4 followed by doubling up the rooks on the f-file. 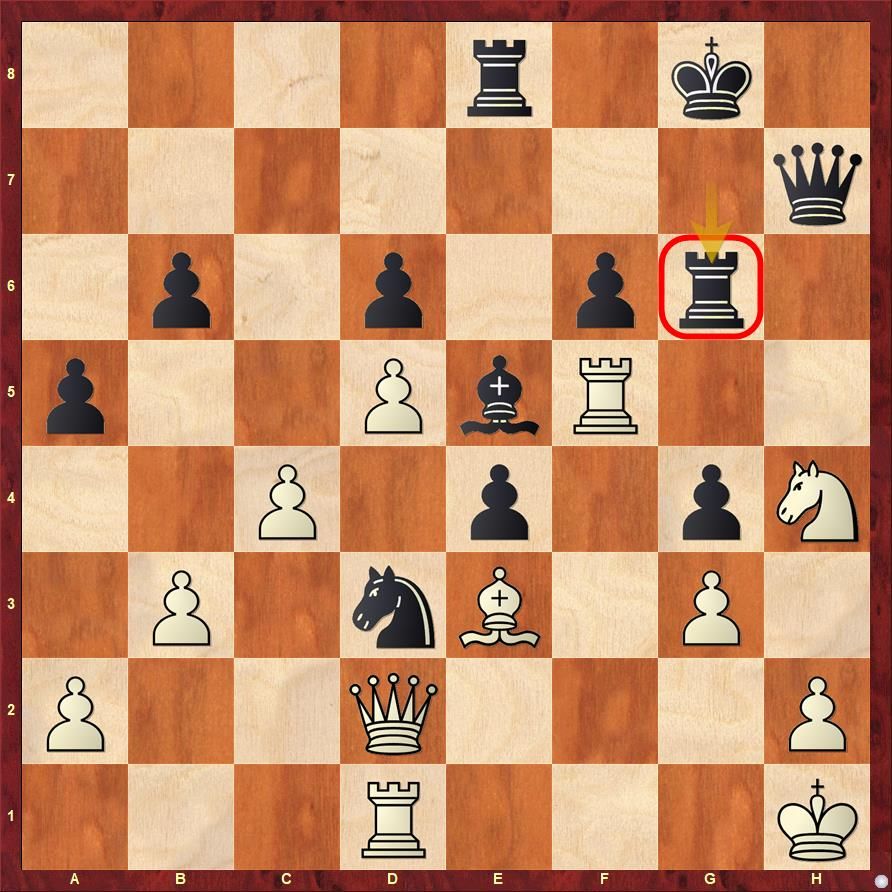 Black has just played the move 30...Rg6, what would you do here if you were in White's shoes? 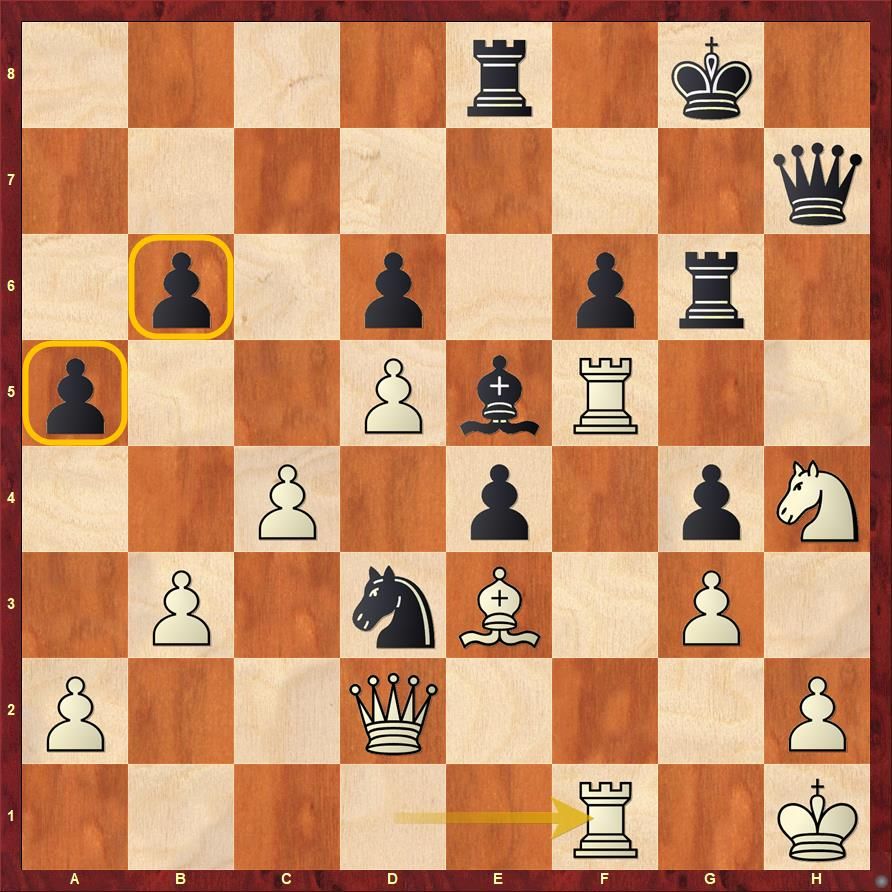 Well, 31.Nxg6 wouldn't have been a bad move but Raahil showed striking restraint keeping the rook untouched and simply piling up the pressure on f-file with 31.Rdf1! Next it was time to take down the loose pawns on the queenside. 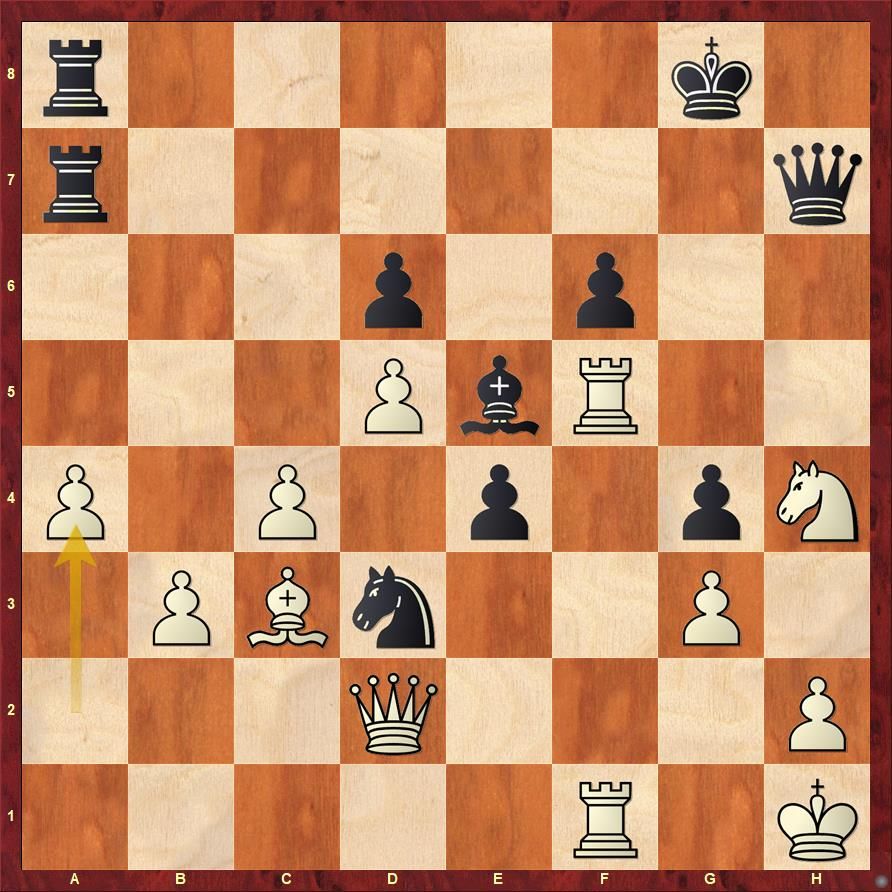 White consolidated with 35.a4 and Black really didn't have any target to counter White with. Resignation came four moves later on move 39!

Some more photos and results 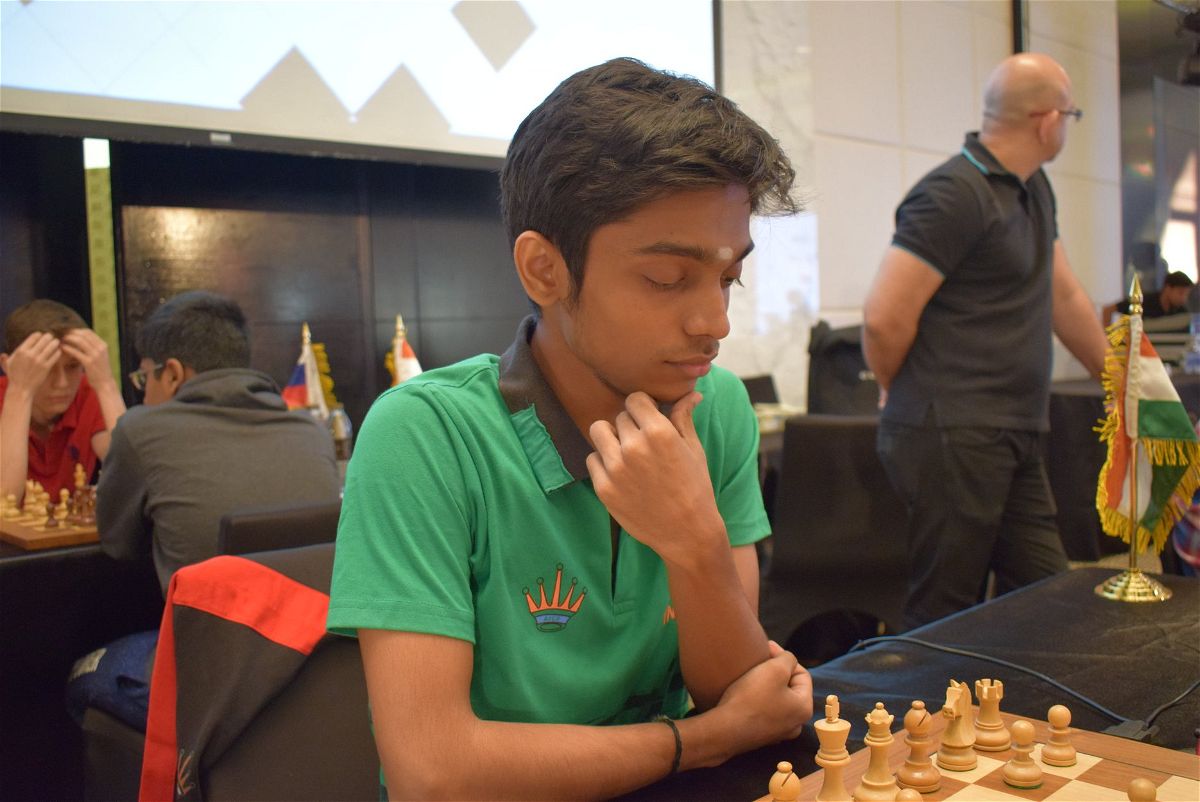 In what was one of the longest games of the round, Aravindh Chithambaram registered victory against WGM Zhang Xiaowen after a long struggle lasting 93 moves | Photo: Rupali Mullick 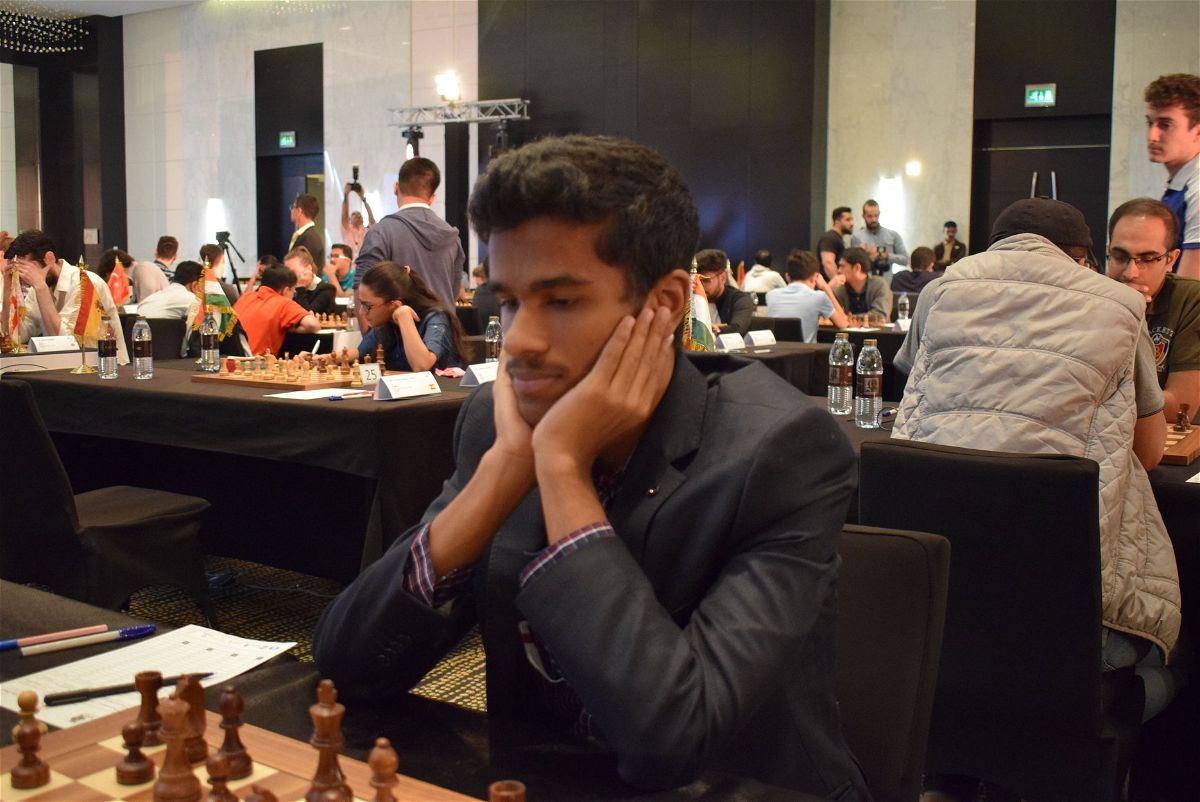 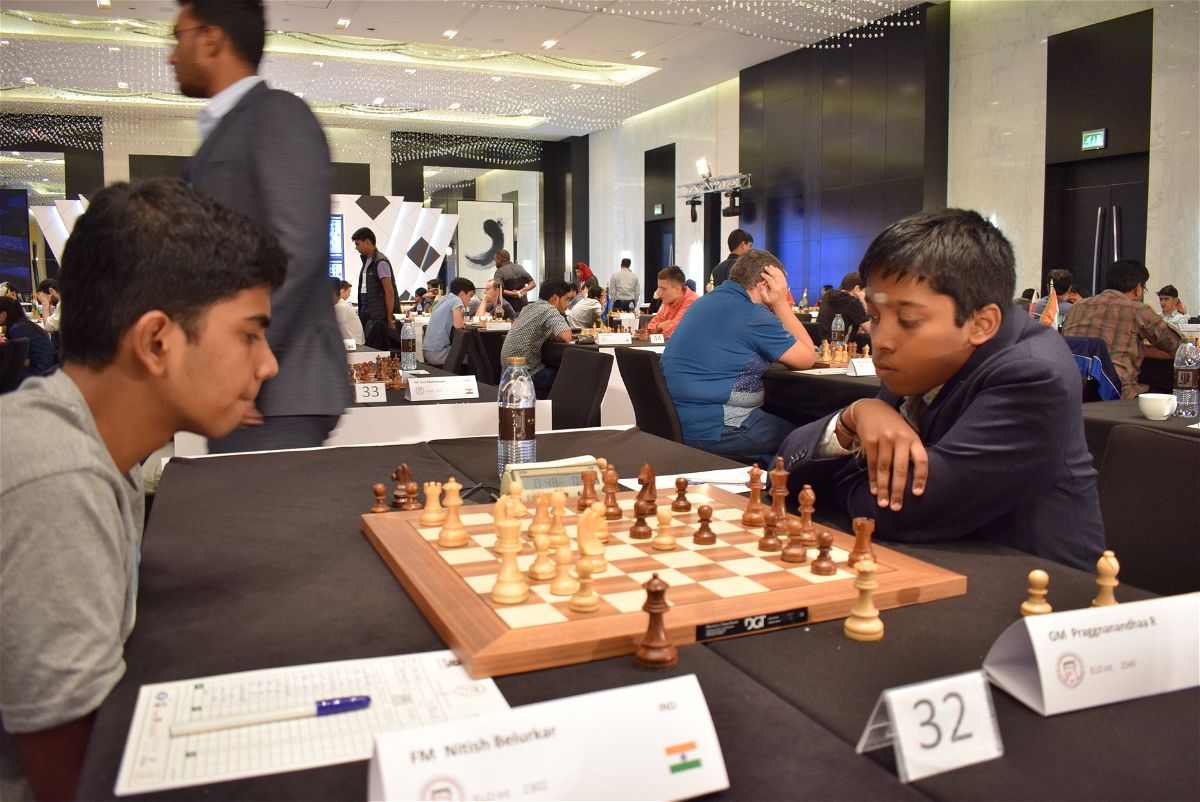 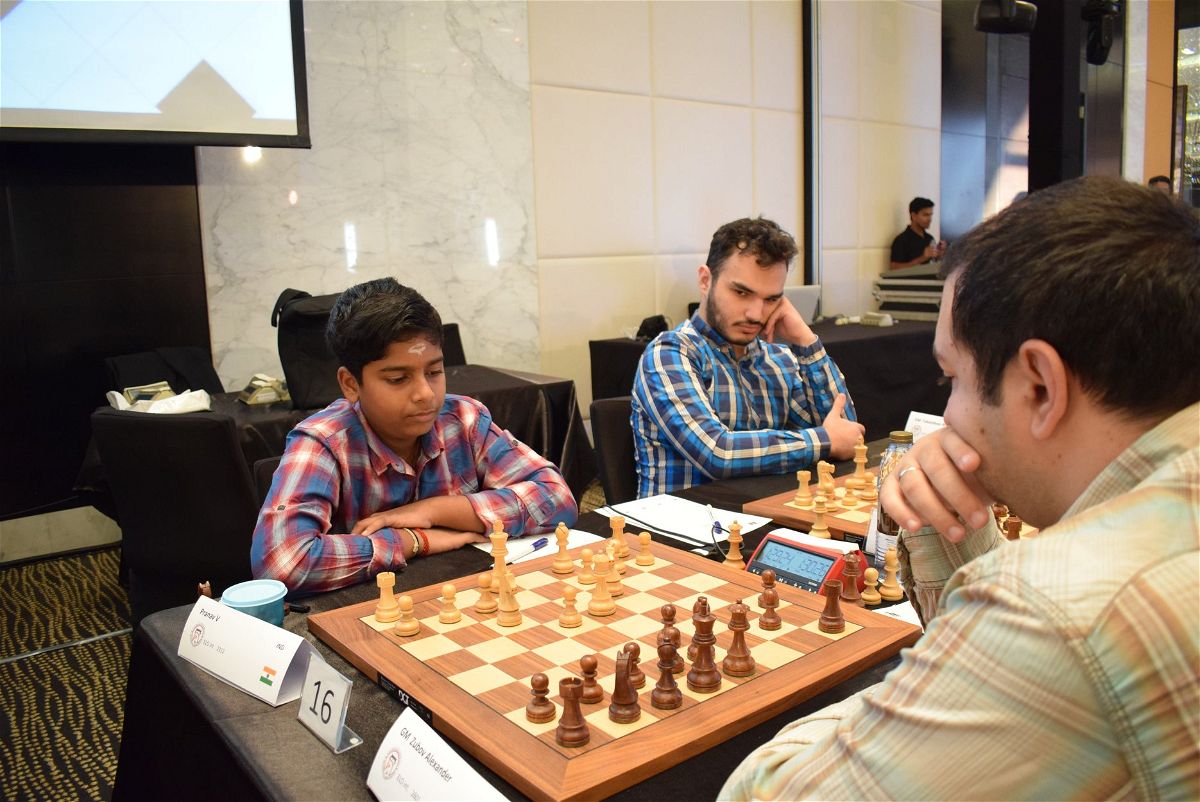 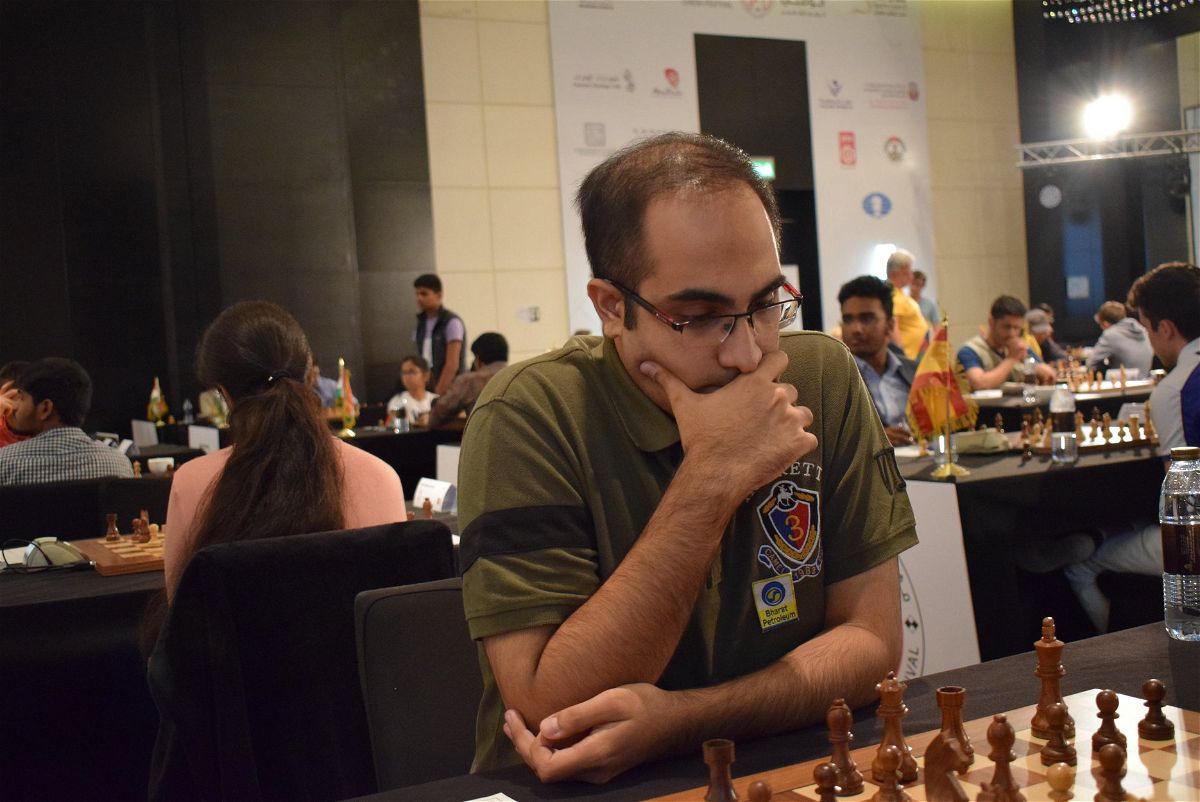 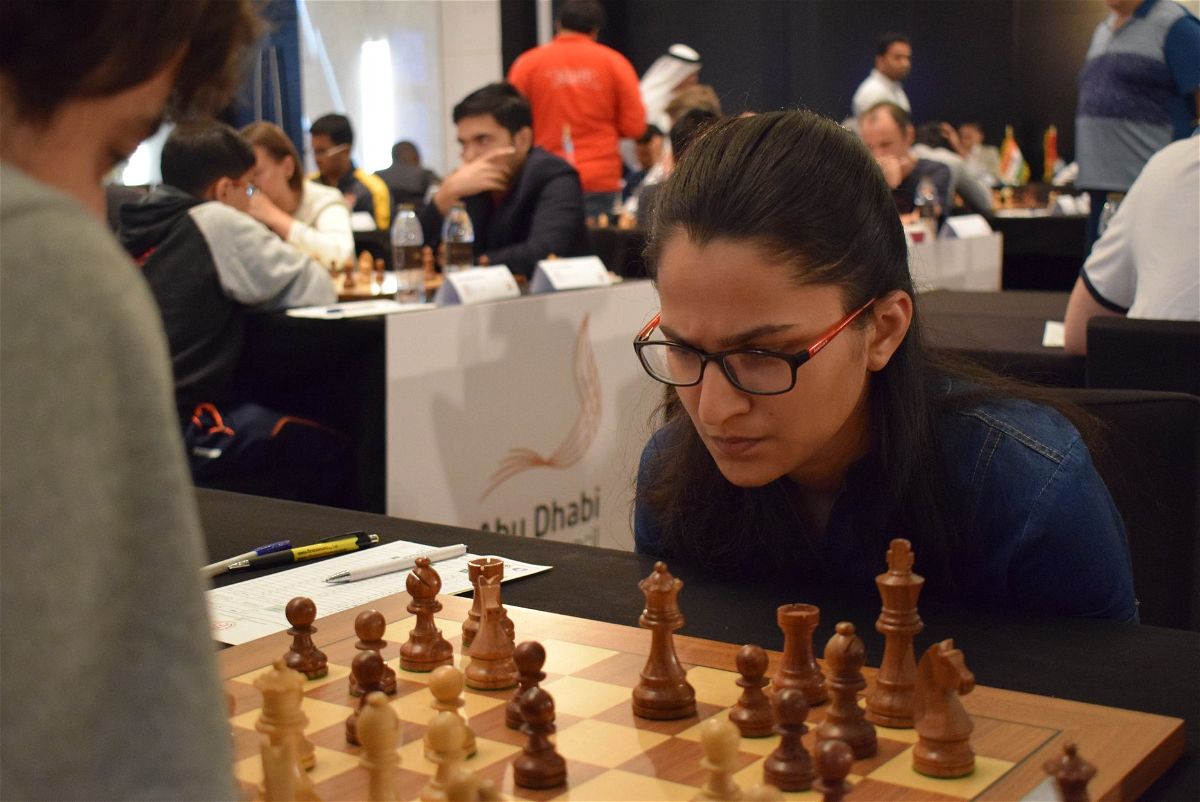