Isle of Man Rd 04: Vidit joins Carlsen and company in the lead

After conceding a draw in round 1, Vidit Gujrathi has come back with a bang. With three back to back victories, he is now one of the co-leaders along with Magnus Carlsen and five other players. Just half a point behind is a 28-player pack which includes Vishy Anand, Fabiano Caruana, Hikaru Nakamura etc. But the real surprise in the pack is IM Harsha Bharathakoti. This 2394 rated has stunningly outperformed his rating. His current score is an undefeated 3.0/4 with a performance rating of 2843!! Here's a report with pictures, games and analysis.

Tuesday was a relatively peaceful day in Douglas. Only two of the top ten games at the Isle of Man Chess Open ended decisively and both of these games featured an Indian player. After his first round draw, Vidit Gujrathi had come back strongly winning both his games in the next two rounds. Yesterday was his chance of scoring a hat-trick of wins. And the lad from Nashik did not disappoint. 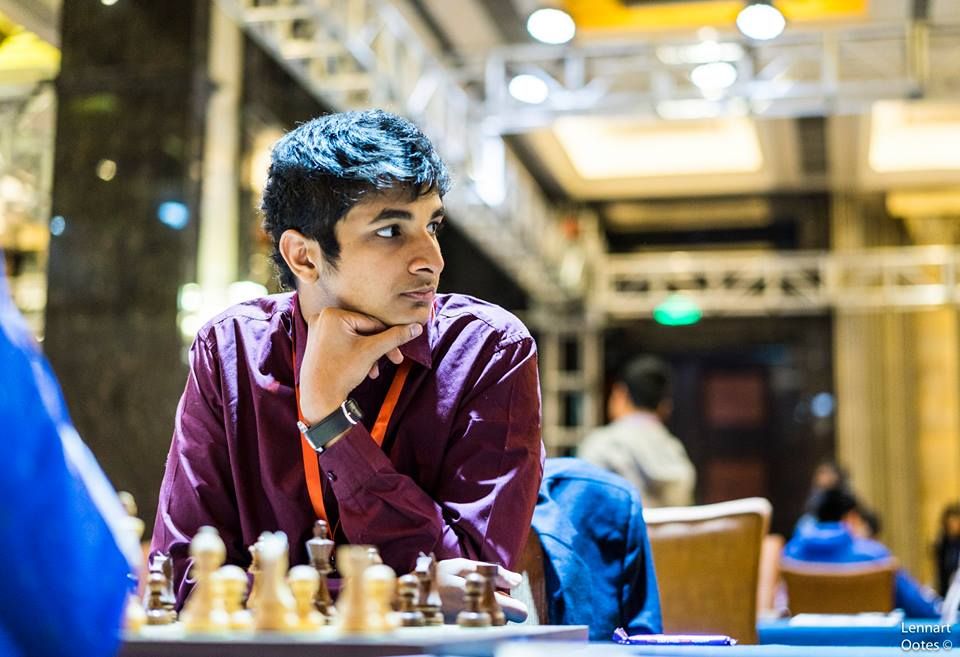 Vidit Gujrathi, after his win in round 4, is one of the tournament leaders | Leenart Ootes

Playing from the black side of a Ruy Lopez Flohr-Zaitsev variation, Vidit played solidly in the opening to secure equality first. Once that was accomplished, the 22-year-old sacrificed a pawn with the idea of generating an attack on white’s king with his pawns. Bok tried to undermine Gujrathi’s pawn chain immediately with 28. g4. But this turned out to be an error on several fronts: it compromised white’s king position; it also allowed the Indian to plant his knight deep into the white camp; and most importantly, it opened up the g-file which Vidit was later able to use to strengthen his attack. This cost Vidit another pawn, but at that point, his position mattered more than material.

Continuing energetically, Gujrathi kept creating threats in the position and, in the end, walked out of these deep woods of variations with an extra piece. Further, Gujrathi forced also an exchange of queens. Being a piece down in a not-so-complex position meant that it was an insurmountable task for Bok to save the game. At this point, Bol decided to cut his agony short and throw in the towel.

With this win, Gujrathi has joined the world champion Magnus Carlsen and five other players in a seven-way tie for the first place. In round five, he will be playing the American GM Alexander Lendermann. While Vidit is the favourite by rating in this matchup, Lendermann has beaten a GM as strong as Francisco Vallejo Pons and drawn against Eljanov in this round. This will definitely be a game to watch out for. 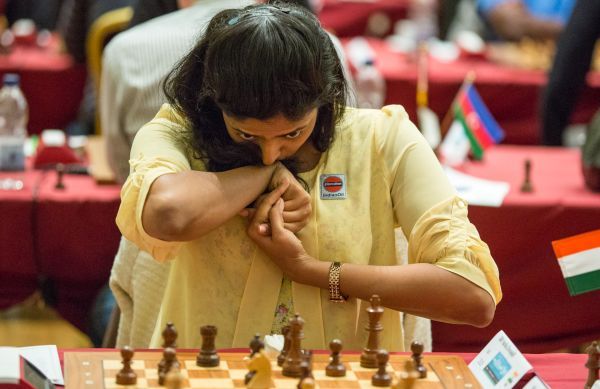 Can you give this picture a quirky caption? Write your caption in comments.| Chess.com / Maria Emelianova

In the other decisive game – which was played on board 10 – between Laurent Fressinet and Harika Dronavalli ended with a loss for the Indian women’s number two. At kickoff, players ventured into the waters of the English Opening with Harika having the black pieces.  Right out of the opening, between moves 18 to 25, occurred a mass exchange of pieces that transposed the game into an equal looking endgame. The Frenchman did have a small advantage though, because of Harika’s isolated pawn on the queen’s file. As the endgame arose, Harika’s weak pawns began falling off one by one. But it wasn’t until the 76th move that Harika gave up the ship. 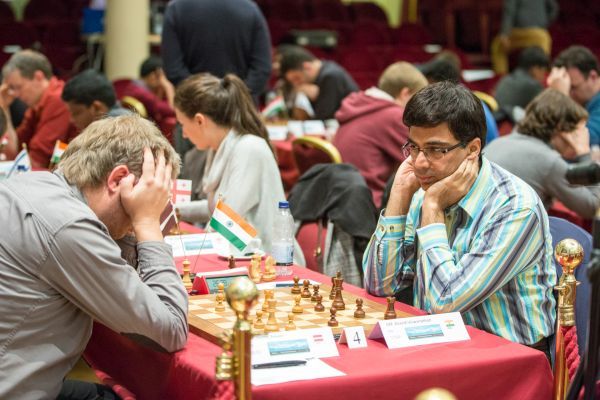 Viswanathan Anand seemed to be in the mood to play safe on Tuesday. Paired against Alexei Shirov, a player known for his creativity and aggressive play, Vishy chose the dullest of openings one could think of: the main line of the Berlin Defence. Nothing much happened in the game. As per the opening theory of the Berlin, queens were exchanged quite early in the game. This was followed by some more exchanges. By the 30th move, players reached a dead equal endgame in which they decided to sign the truce. 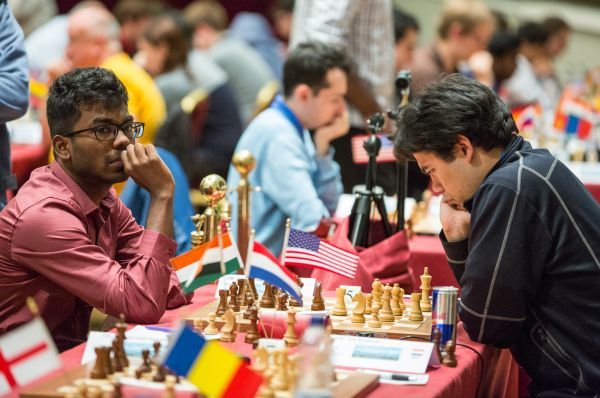 Naka grilled Sethu for 94 moves before conceding a draw to the Indian GM | Chess.com / Maria Emelianova

A win in round three pushed SP Sethuraman high up the pairing chart. On Tuesday evening, he was pitted against the world number ten, Hikaru Nakamura. With the whites in hand and a lower rated opponent across the table, the American number three naturally wanted to convert the game into a full point. He chose the Cambridge Springs variation of the Queen’s Gambit Declined as his opening weapon for the round. As early as on move 8, the American number three offered a pawn with the hope of restricting the mobility of black’s dark-squared bishop, which in turn kept black’s rook confined.

But Sethu was not having any of it. He returned the pawn at a timely moment and was successful in inducing his opponent into exchanging queens. A pair of minor pieces and another pair of rooks were hacked off the board soon afterwards. By the 30th move, it looked like players were going to shake hands and sign peace soon. But Naka had other plans. Even if there was a whisker of a chance to play for a win, Nakamura wanted to have it. He kept pressing for a long time and, on the 70th move, even won a pawn. However, even with the extra pawn, it was impossible to break black’s blockade. After testing Sethuraman until the 94th move, Nakamura decided it was time to take the draw and call it a day. 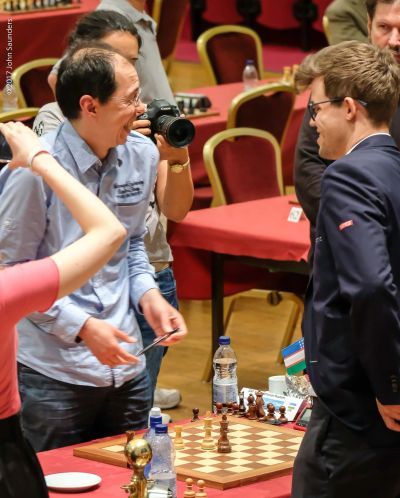 What’s a better way to end the game than ending it with a good laugh? | John Saunders

into a Spanish or Italian Opening and instead went for an unorthodox variant of the Pirc Defence. White had a small space advantage out of the opening, but that wasn’t anything special. Carlsen tried opening up the position and broke in the centre. But this only led to further liquidation. By the 45th move, the players were in a rook and pawn endgame where Carlsen had a slight but stable advantage, just the kind of positions the current world champion likes. It wasn’t unreasonable to assume that Carlsen might grill Kasimdzhanov for hours to check if he cracks. But things went a lot faster. The two agreed to a draw by the 72nd move. 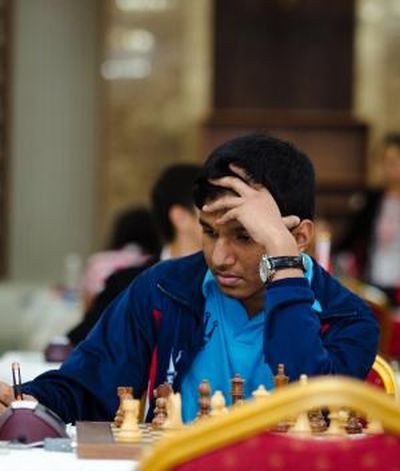 He’s scored an undefeated 3.0/4 against GMs rated more than 250 points above him. Harsha Bharathakoti is definitely someone to be watched out for! | Harry Gielen