Isle of Man Chess: Random pairings adorn round one with interesting matchups

While the final round of the Chess World Cup is in progress, another event featuring most of the bigwigs of the chess world took off yesterday in the Isle of Man. With a total prize fund of a whopping £133,000, the tournament has managed to attract 67 GMs including five of the world's current top ten players. What's more? The organisers of this event came up with an ingenious plan to spice up the first round. Instead of going by computer's pairings which goes as per players' tournament seeding, they went for random pairings using a tombola machine! Here's a report with games, pictures and analysis.

After some nerve-wracking battles at the Chess World Cup in Tbilisi, Georgia, a pack of the world’s chess elite have headed westwards for the Chess.com Isle of Man Open. On the line is a hefty prize fund of £133,000, with the title winner’s share being £50,000. The tournament has attracted sixty-seven grandmasters, of whom twelve are rated above Elo 2700. Some big names in the tournament include world champion Magnus Carlsen, Vladimir Kramnik, Fabiano Caruana and Viswanathan Anand.

An interesting quirk about the event is that unlike conventional open tournaments, the Isle of Man did not resort to the Swiss Manager (the software used for pairing participants of a Swiss-system chess tournament) for its first-round pairings. Instead, the organisers decided to go for random pairings for the first round. The top eight players were asked to draw chits out of a tombola machine to find out who their first-round opponent would be. For the rest of the players, a computer-generated random pairing was made. 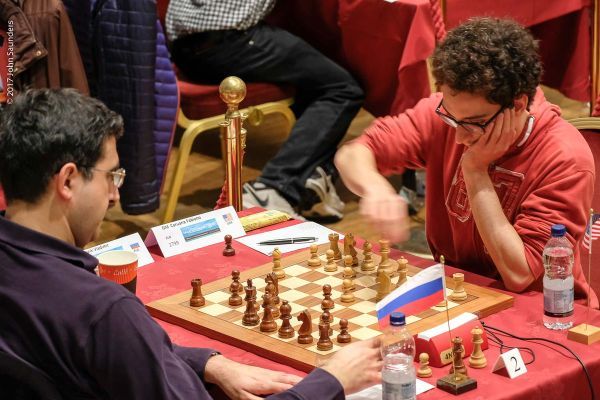 When was the last time you saw the second and the third seeds of a tournament pitted against each other in a Swiss System tournament? | Photo by John Saunders

As a result, some really interesting match-ups were lined up for round one. Vladimir Kramnik, the second seed in the tournament, drew out Fabiano Caruana’s name from the tombola. The second seed was to play the third seed in the tournament in the very first round! This was perhaps the best pairing from a spectator’s point of view; the players too were up for a game. Kicking off with a Queen’s Gambit Declined, the players castled on opposite wings and went king hunting as the middle game commenced. Kramnik, who was playing black, was on the back foot as Caruana’s attack was faster. Trying to help his king escape its wretched fate on the king-side, Kramnik sacrificed a pawn to exchange queens and mellow the attack. But this simply turned out to be a case of ‘out of the frying pan and into the fire’. Now into the endgame, the 25-year-old Italian-American found some really neat rook manoeuvres to make the most of his extra pawn and take the full point home. 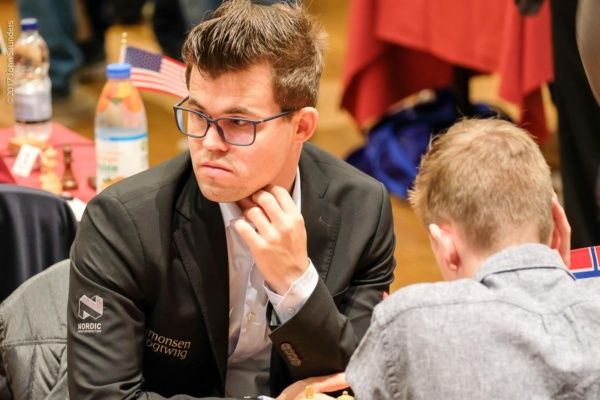 When you're the world champion, you don't even have to look at the board to win | Photo by John Saunders

On the top board, Magnus Carlsen effortlessly won his game against the Icelandic player, Bardur Orn Birkinson. Rated more than 600 points above his opponent, the game turned out to be a cakewalk for the world champion. Starting out with a Nimzo Indian defence in response to Carlsen’s 1. c4, Birkinson missed a tactic that lost material and the world champion made no mistake exploiting his opponent’s error. 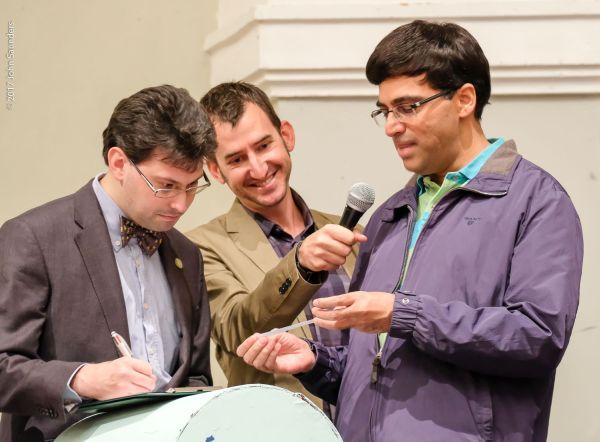 Next up to the tombola machine was Viswanathan Anand who picked a chit with the name of the American International Master Mark Esserman on it. Esserman had held Anand to a draw in Gibraltar last year. So even if there was a big rating difference between him and Esserman, Anand could not afford to take this game lightly. With the whites in hand, Anand went for the Opocensky variation of the Sicilian Najdorf and outclassed his opponent in the middle game. Planting his knights in the centre, Anand made a temporary pawn sacrifice on move 26 while also opening up lines for his rooks. By the 46th move, the Madras Tiger had wrapped the game up in style, sacrificing a full rook. 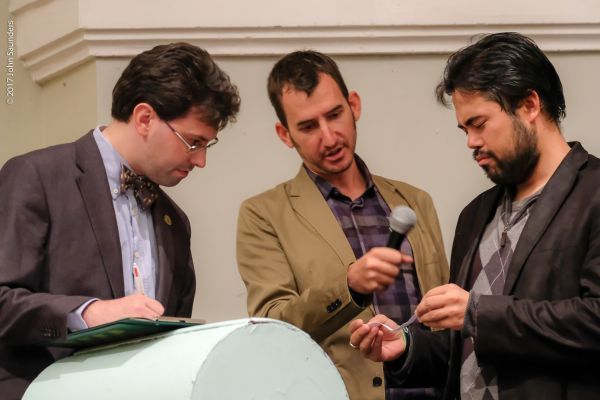 When Nakamura got to know he was playing GM Neelotpal Das, he hadn't perhaps foreseen how difficult it might be. | Photo by John Saunders

Right beside Anand on board 5 was Neelotpal Das, whose name Hikaru Nakamura had picked out during the drawing of lots. Despite being rated more than 300 points below Nakamura, the Bengali GM gave the American number three a tough time turning the game in his favour. But towards the end of the second time control, Das was short on time and cracked. Just one move before time completing the second time control, he allowed Nakamura’s queen enter into his position. His position was already looking difficult but he was holding his ground. Unfortunately, Das fumbled yet again and this simply spelt doom. By move 63, he was forced to resign. 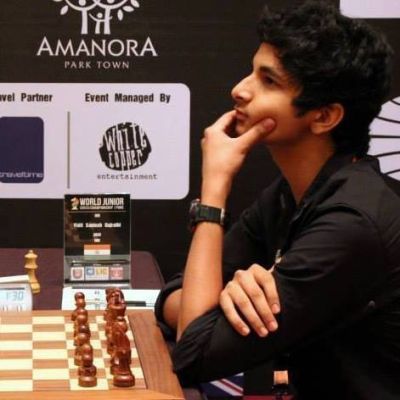 Vidit Gujrathi suffered a small upset in round one as he was held to a draw by German GM Rasmus Svane, who was rated 100 points below Gujrathi. Opening with the classical French Defence, Vidit tried complicating the position by castling on opposite wings. When that didn’t seem to take him anywhere, he sacrificed a couple of pawns in order to get a shot at his opponent’s king. But the German soon found a forced repetition in the position and the Indian ace had no option but to concede half a point. 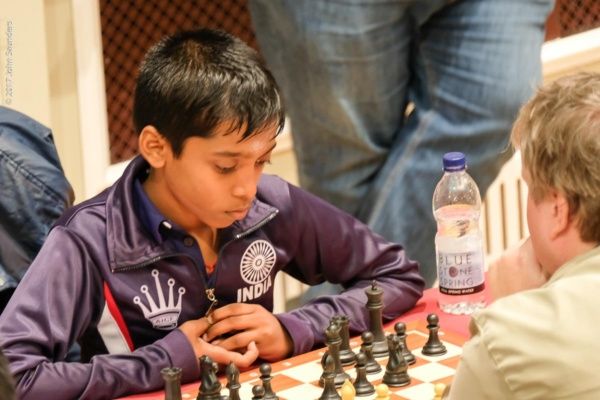 Having won his round one game, Praggnaanandhaa will now be playing Mickey Adams | Photo John Saunders

In some other important Indian results, B Adhiban drew his game against the 2012 world championship challenger, GM Boris Gelfand; 17-year-old IM Harsha Bharathakoti was able to hold GM Sergei Movsesian with the black pieces in a Sicilian Najdorf; 13-year-old Nihal Sarin was also able to hold his much higher rated opponent, GM Varuzhan Akobian; another young Indian prodigy, R Praggnaanandhaa won his game against  IM Dietmar Kolbus; SP Sethuraman got the better of the German-Ukrainian GM Alexander Donchenko.

Today, in round two, two other Indians besides Anand (who will be playing IM Lampert Jonas), will be seen playing on the top boards. While Visakh NR is pitted against  Pavel Eljanov on board 6, R Praggnaanandhaa will be facing the English number one, Mickey Adams with the white pieces on the fifth board.