After his win against Aronian in the previous round, India's Pentala Harikrishna had joined the lead along with Alexander Grischuk and Teimur Radjabov. In round 7, he was paired against one of his co-leaders, Grischuk and had the white pieces. This was a good opportunity for him to shoulder one of his opponents behind in this race towards the title. But this was not to be. Hari forgot some of his preparation and could only draw. While Radjabov, on the other hand, made the most of this opportunity by winning his game against Svidler. A detailed report with Hari's annotated game.

Approaching closer to the finish line, Azerbaijani GM Teimur Radjabov put on a spurt and defeated the six-time Russian Champion Peter Svidler in round 7. Before the round began, Radjabov was in joint lead with the Indian ace, Pentala Harikrishna, and the three-time world blitz champion, Alexander Grischuk. As Grischuk and Harikrishna were pitted against each other and agreed a draw, Radjabov made the most of his opportunity and beat Svidler to take sole lead. With only two rounds to go, the Azeri GM has put himself in a strong position to win the title prize with this victory. 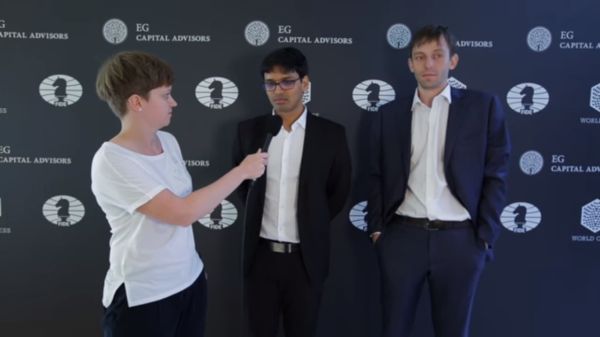 Hari and Sasha during the post-game interview

Pentala Harikrishna had the white pieces against Alexander Grischuk in round 7 of the Geneva Grand Prix. The king’s pawn has been Hari’s favourite at this event apparently and he saw no reason to deviate from it against Grischuk. In response, the Russian essayed the Sicilian Najdorf, signalling his intent for a sharp fight. This was not the first time Hari had been confronted with the Najdorf in this event. He had also played on the white side of it against Radjabov’s compatriot, Shakriyar Mamedyarov, in round 3 and achieved a winning position. As he had done against GM Mamedyarov, Hari chose the 6. h3 line yet again. This line is a really sharp one wherein players tend to castle on opposite wings and storm their opponent’s monarch with their pawns. Considering that both players were tied for first, this was their chance to shoulder one of their co-leaders behind in the race to the title prize. A razor-sharp battle was expected.

In compliance with the opening, players castled on opposite wings. Quite surprisingly, in fact, Grischuk chose to castle kingside on move 14, exactly when Hari’s pawns were right under his king’s nose. This seemed to give the Indian a slight edge as his pawns could have pounced upon the Russian’s king any time. But contrary to the nature of the opening, this game fizzled out into a draw pretty quickly. Instead of going for the kill with his pawns, Hari chose to play it safe. Starting with his 17th move where he exchanged his knight for Grischuk’s bishop, Hari went for mass exchanges trading queens and a pair of rooks in the next few moves. In the resulting position, Grischuk seemed to have an edge but after the game, he said he was afraid of the potential of Hari’s knight which could have jumped unpredictably into his position. Explaining his play, the Indian number two said that he felt he had mixed up some lines in the opening and was unable to recall the right moves as per his preparation. The two agreed to shake hands after 29 moves of play.
[Event "FIDE Geneva Grand Prix 2017"]
[Site "Geneva"]
[Date "2017.07.13"]
[Round "7"]
[White "Harikrishna, Pentala"]
[Black "Grischuk, Alexander"]
[Result "1/2-1/2"]
[ECO "B81"]
[WhiteElo "2737"]
[BlackElo "2761"]
[Annotator "Tanmay Srinath"]
[PlyCount "58"]
[EventDate "2017.??.??"] 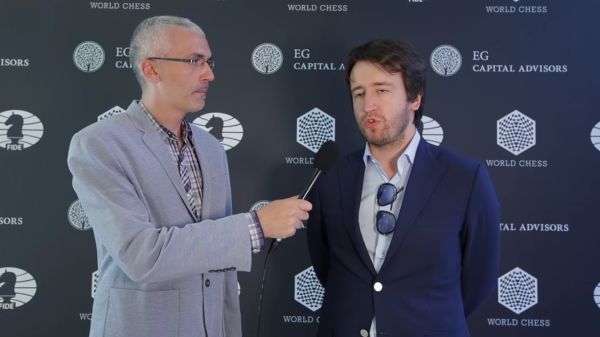 The sole leader after round 7

With this game drawn, Teimur Radjabov, the third co-leader before round 7, got an opportunity to overtake his nearest rivals. He had come to the board with the clear plan of getting Peter Svidler, his opponent, out of his comfort zone by going for a quiet position.  Playing on the white side of a Symmetrical English Opening, the Azerbaijani GM traded queens as early as move six and kept a minimal edge in the position. As play progressed, Radjabov was able to exchange another set of minor pieces and open up the queen rook file in order to infiltrate with his rooks. By this time, Svidler’s position – although, objectively, within the realms of a draw – was quite difficult to defend due to pawn weaknesses. While Svidler tried to find the best defences, Radjabov was able to come up with a nice combination that led to a loss of a piece for his opponent. At this point, Svidler had seen enough and decided to show the white flag.

The game between Alexander Riazantsev and Li Chao was an exhausting 84-move-long battle in which the former was able to draw blood out of stone. Kicking off with the Schlechter variation of the Gruenfeld Defence, Riazantsev was able to isolate Chao’s queen’s pawn and win it. But the Chinese GM sought counterplay against his opponent’s queen rook pawn and grabbed it eventually to neutralise Riazantsev’s advantage. In the process, the players exchanged several pieces and the resulting endgame looked completely equal. But the Russian GM kept shuffling his pieces waiting for his opponent to commit a mistake. His patience paid off on the 63rd move when Chao wore out and played an inaccurate move with his king that allowed Riazantsev to exchange rooks. Both players were able to queen their pawns in the ensuing position but the fact that Riazantsev was also able to win a pawn amid all this, turned the tables in his favour. 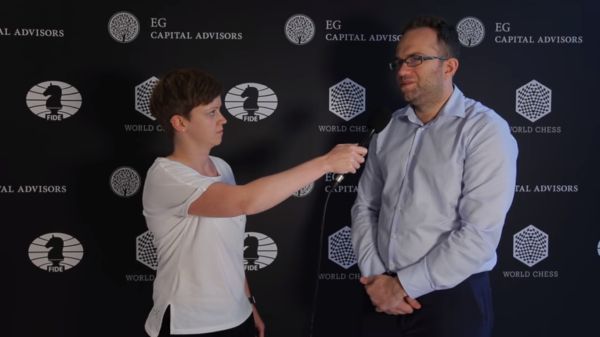 Pavel Eljanov won in a complicated game after two consecutive losses in the previous rounds
After losing two rounds in a row, Ukrainian GM Pavel Eljanov won in an extremely complicated battle against Salem Saleh. The Emirati Grandmaster essayed the Benoni Defence – AKA ‘the son of sorrow’ – to counter Eljanov’s queen’s pawn advance. This opening is infamous for resulting in wildly tactical positions and that is what happened in the game. The position was sharp as a saw when Saleh made a few inaccurate moves which allowed the Ukrainian to break open the centre with the move 21. e5. Generally speaking, this is a highly desirable pawn break in the Benoni for the white player, and in this particular position, it spelt doom for the Sharjah-based GM. 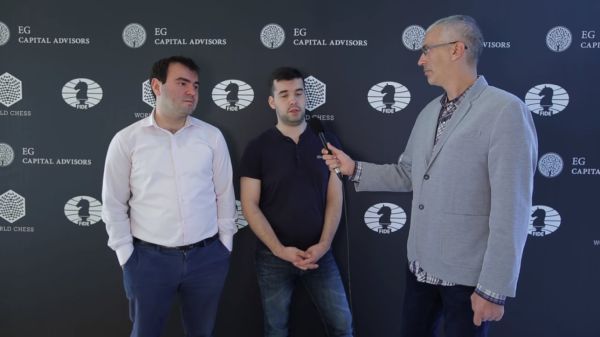 Nepo was impressed by Mamedyarov's queen sacrifice
Among the draws in the round, the one between Shakhriyar Mamedyarov and Ian Nepomniachtchi was the most interesting. Playing on the white side of a Gruenfeld defence, Mamedyarov came up with a brilliant queen sacrifice to force perpetual checks. After the game, his opponent, Nepomniachtchi also praised the Azerbaijani saying that he was impressed by this idea. English number one, Michael Adams seems to have developed a liking for a silent life. He chose to go for his fourth short draw of the event in round 7 against Dmitry Jakovenko. The two shook hands in merely 24 moves. The full pairings and results of the round can be found below. 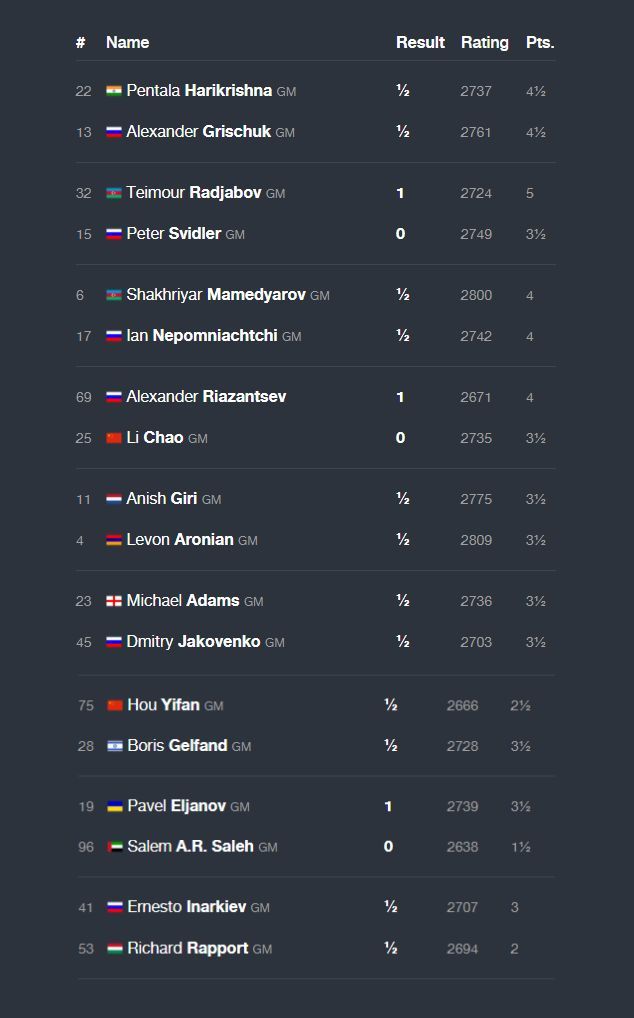 Pairings and results of round 7

After the ante-penultimate round, Teimur Radjabov, with a score of 5.0/7 is the sole leader. Harikrishna and Grischuk are right behind on 4.5/7. Shakhriyar Mamedyarov and Ian Nepomniachtchi share the third place with 4.0/7. Eight players – Aronian, Giri, Svidler, Eljanov, Adams, Li Chao, Gelfand and Jakovenko – share the fourth spot having scored 3.5/7. Inarkiev (3.0/7), Hou Yifan (2.5/7), Rapport (2.0/7) and Saleh (1.5/7) are on fifth to eighth spots respectively.

Having conceded the top spot with a draw in this round, P Harikrishna will have a tough time regaining his tournament lead. With just two rounds remaining, he might be required to win one or even both of his next games to clinch the title prize.