We can officially call him Mr. Commonwealth. Yes that's how common it has become for Abhijeet Gupta to win the Commonwealth Championship! This is his fourth title in a span of five years! Vaibhav Suri won the Silver and Tejas Bakre the bronze. In the women's section Swati Ghate won the final round to clinch the gold, while the silver went to Mary Ann Gomes and the bronze to Tania Sachdev. In this report we have pictures of all the winners, including the 14 age category medalists.

Grandmaster and former world junior champion Abhijeet Gupta came up with an inspired performance in the final round to crush Aleksandar Wohl of Australia and annexed the gold medal in the Commonwealth Chess Championship 2017. 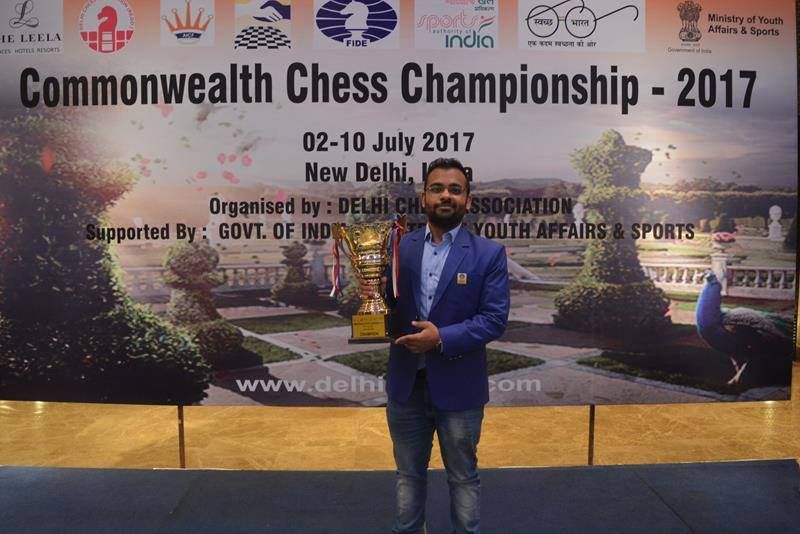 The Delhi-based GM stretched his total Commonwealth titles to four in the last five years and completed a hat-trick of titles. In 2015, he had won the title in Delhi and had won the 2016 edition at Sri Lanka. Gupta was in his elements in the final round as Wohl found no defense. Playing white, it was a queen pawn game by the Indian and Wohl chose an off-beat system that soon spelt doom. The middle game was one sided as Wohl struggled on all parts of the board and it took just 24 moves for Gupta to wrap the issue.

“Every championship or tournament is special but somehow I am able to bring out good chess especially in the Commonwealth in last few years”, said Gupta after the game. The four times champion pointed out that he played decently right through. “I was better in most of the games I won but I was worse against Tejas (Bakre) in the penultimate round. In general I am satisfied about my play here and hope to take this forward in the next few events”, he said. 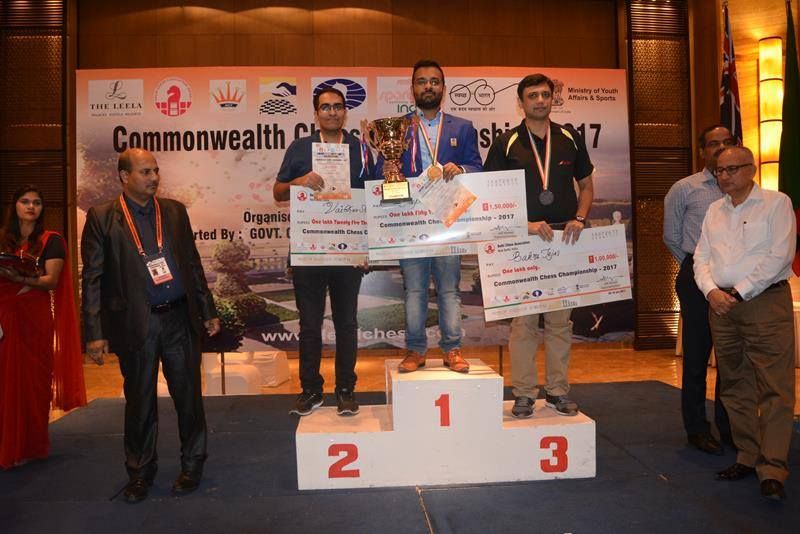 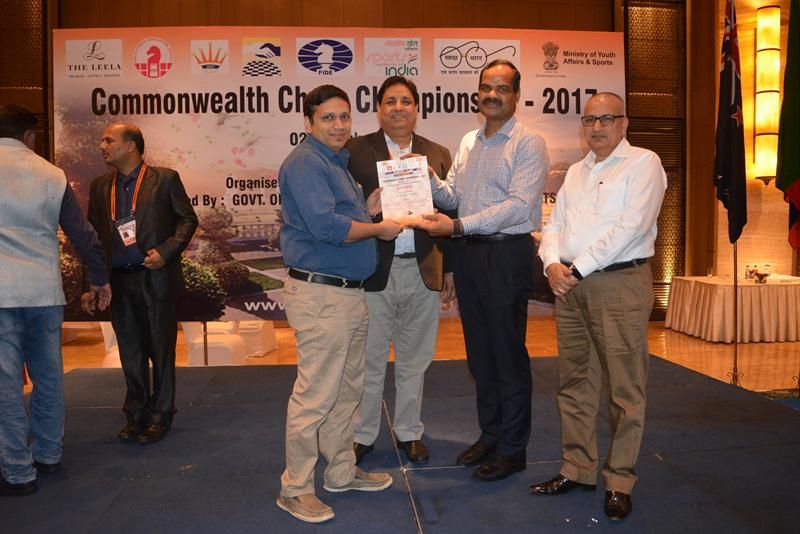 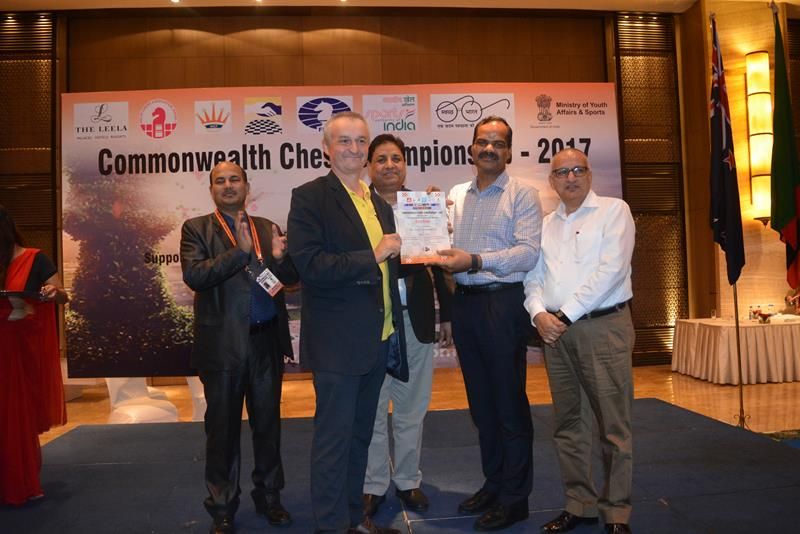 For Alex Wohl, who has retired from competitive chess, finishing fifth is nothing short of a dream tournament. He beat many strong players at the event.

The Women’s Championship was won by Swati Ghate who got rewarded for some excellent play in the early phase of the event. In the final round Ghate defeated Indian junior champion Kumar Gaurav. The Silver here went to Mary Ann Gomes while last year’s champion Tania Sachdev had to be content with the bronze. In fact Tania was completely winning against Swapnil Dhopade in the last round, but she botched it up in time pressure. A win would have secured her the gold! 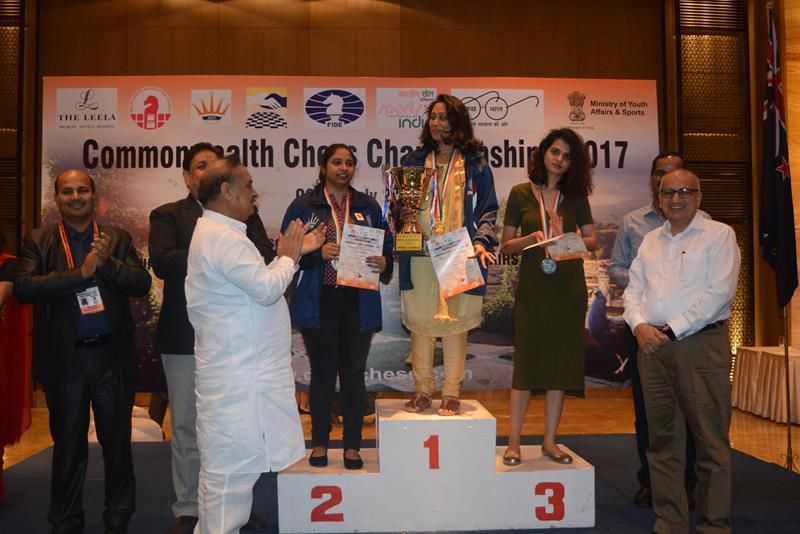 Swati Ghate flanked by Mary Ann Gomes and Tania Sachdev
At the start of the tournament we had asked our readers as to who do they think will win the Commonwealth Women's title. We received 18 comments and one of them was "Swathi Ghate!" Alright, we will forgive the spelling error! 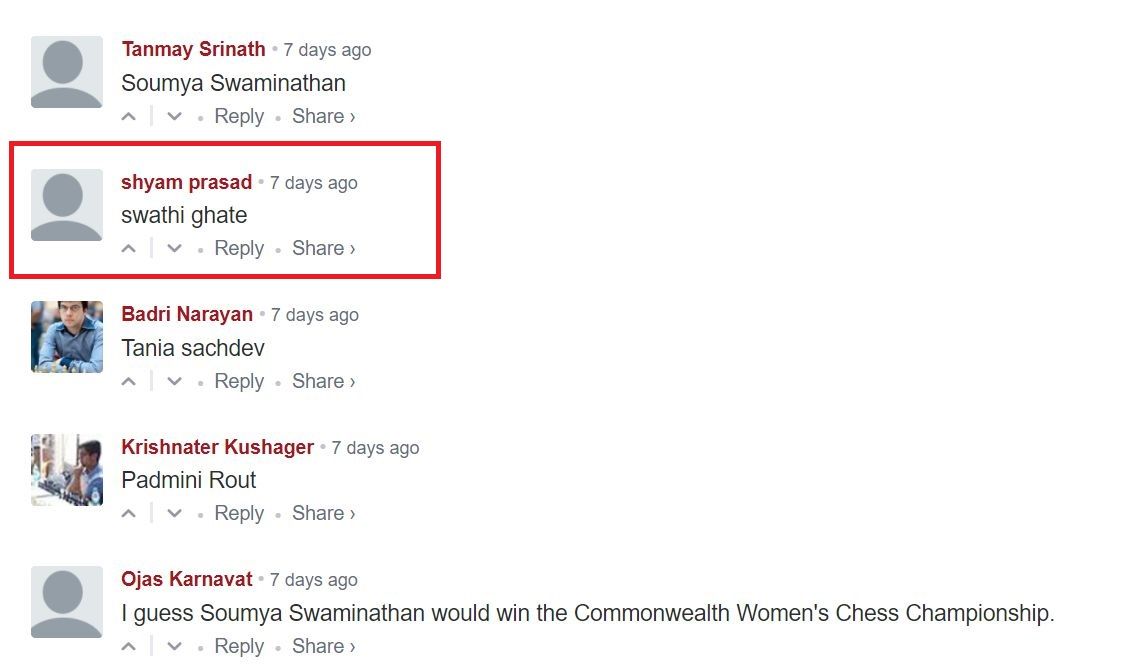 Shyam Prasad is the winner of the three months ChessBase Premium Account. Shyam please write to us at chessbaseindia@gmail.com to claim your prize. 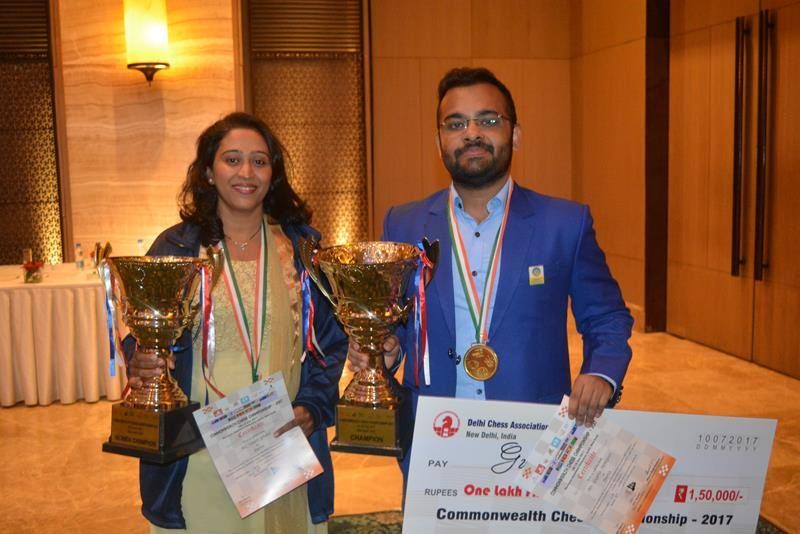 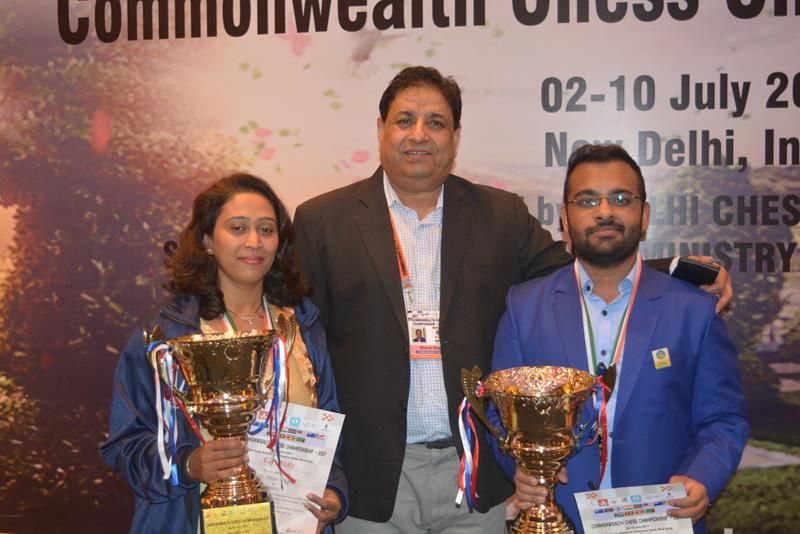 The AICF Secretary with the winners. Bharat Singh can be quite pleased with the job done in holding such a huge international event in India. 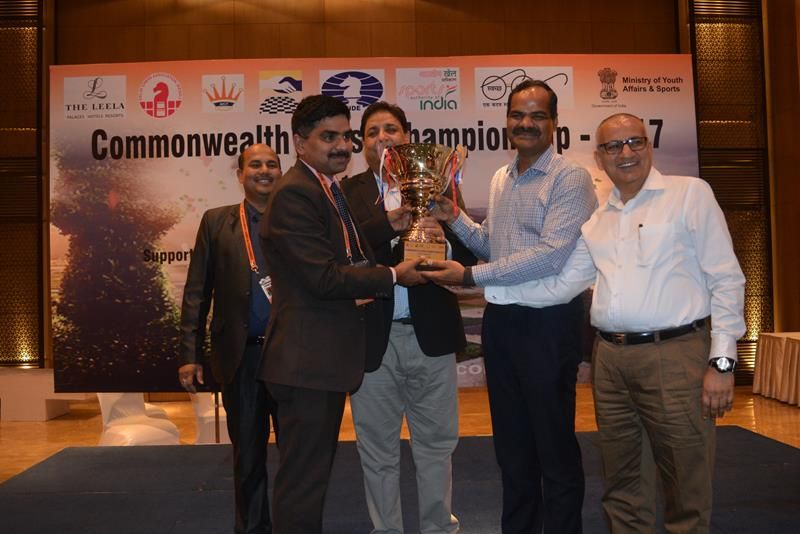 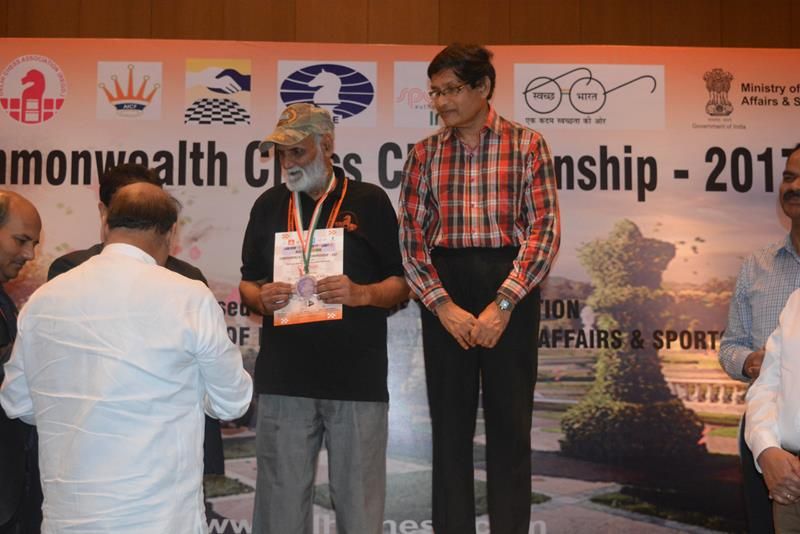 Winners of the Veteran's prize! 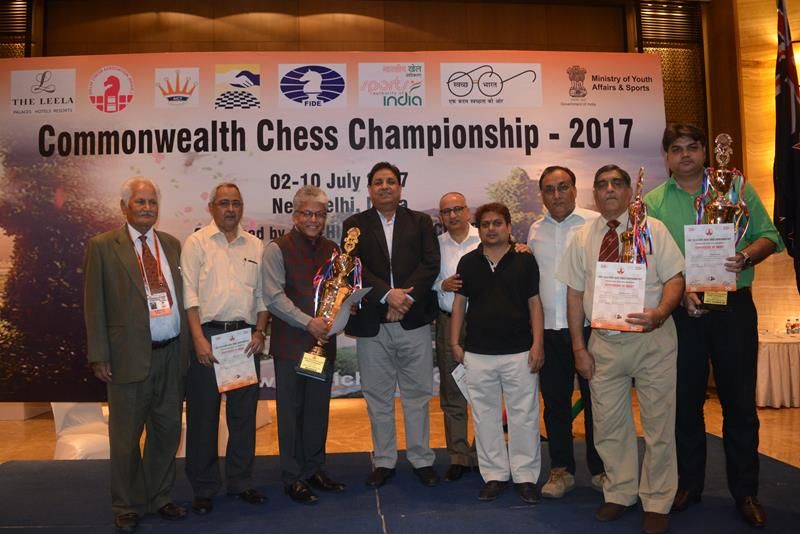 Winners of the 1st Delhi State Media tournament. The event was won by Rakesh Rao. 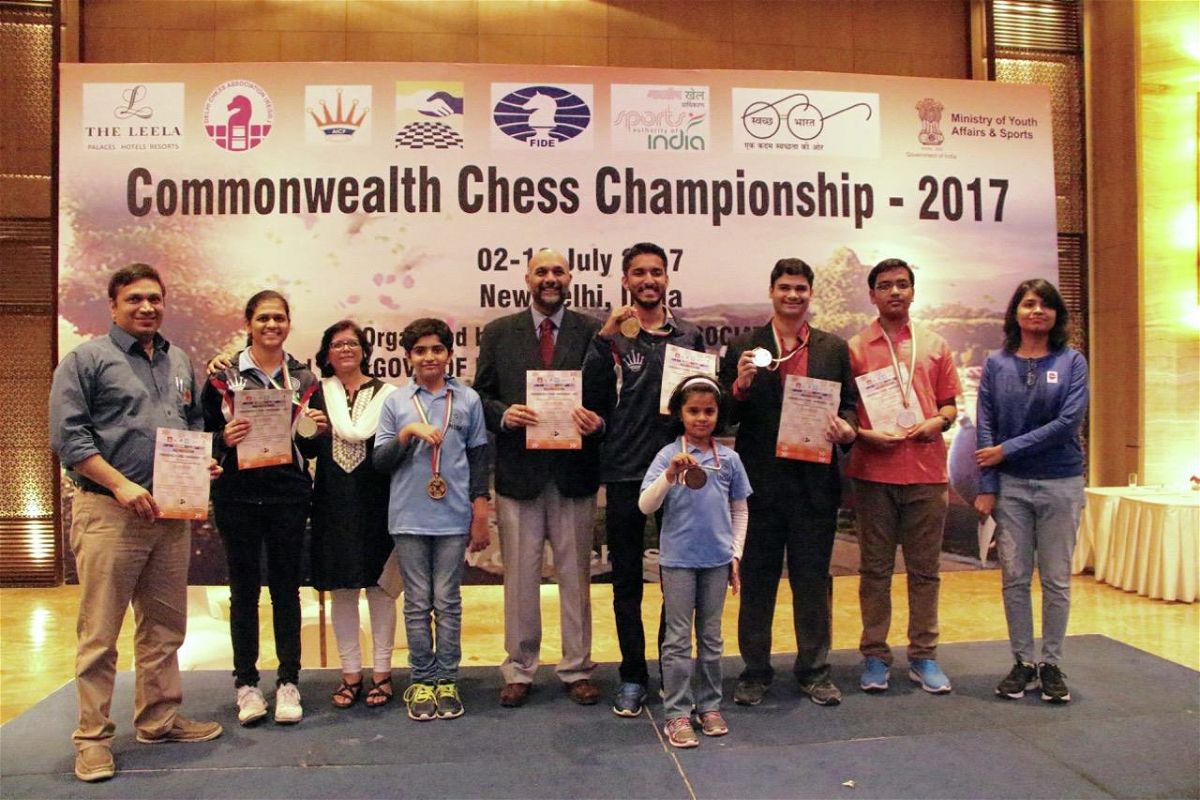 Team Maharashtra! The state won 13 medals in all (5 golds, 5 silvers and 3 bronze). This was much more than any other state. (Many players are missing in this photo).

This was the first time that age category events were separated from the main tournament. It led to some excitement as players of the same age competed with each other. We have pictures of all the prize winners along with final standings and links to chess-results page. In all the pictures the gold is in the centre, silver on the left and bronze on the right. 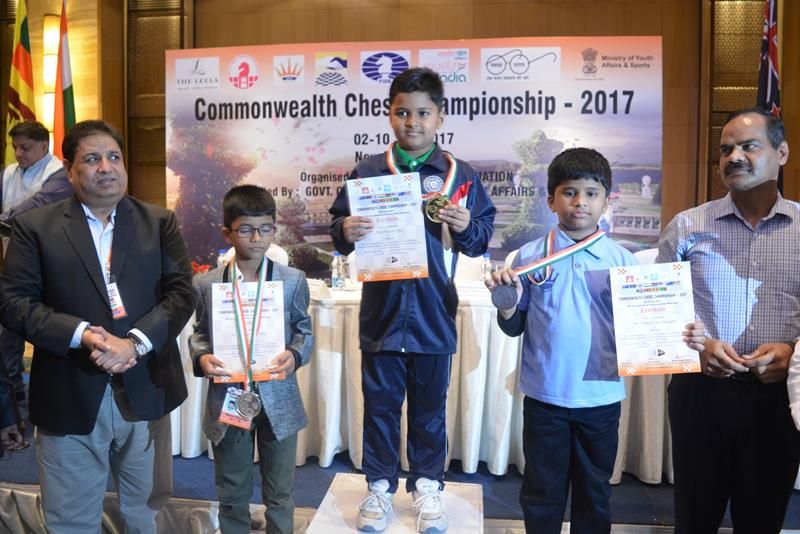 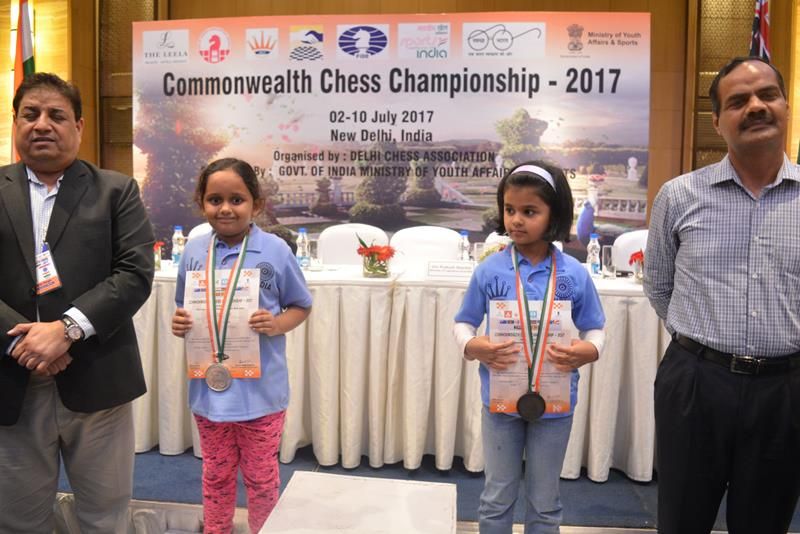 Bronze is here, so is silver where is the gold? 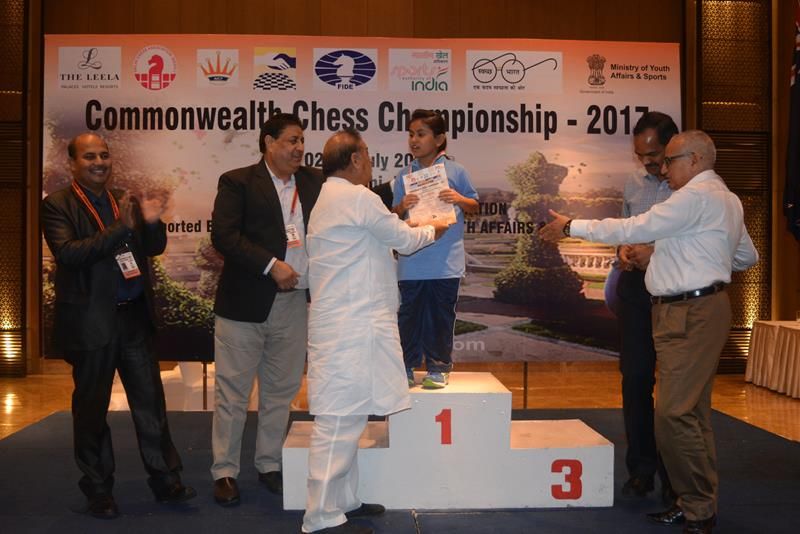 "I had just gone to have an ice cream!" 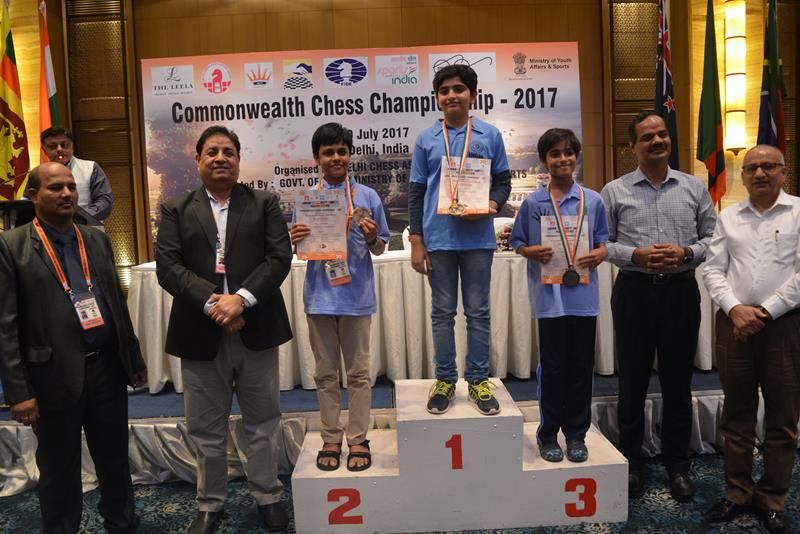 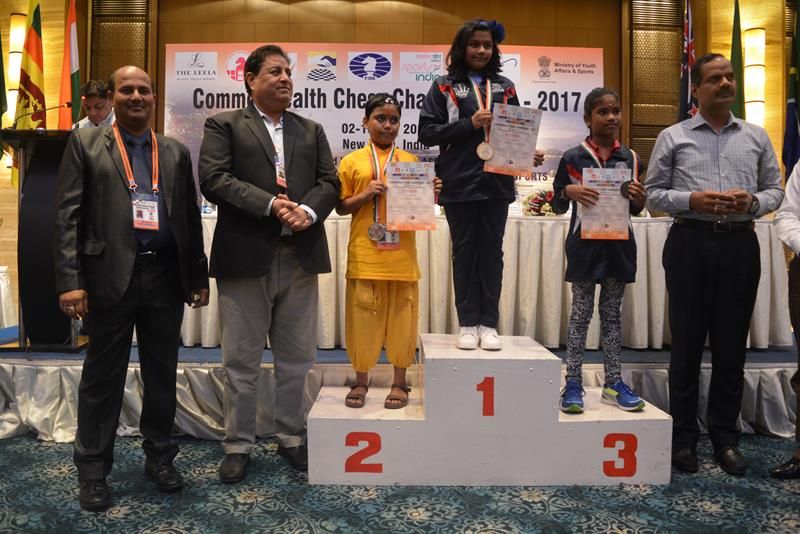 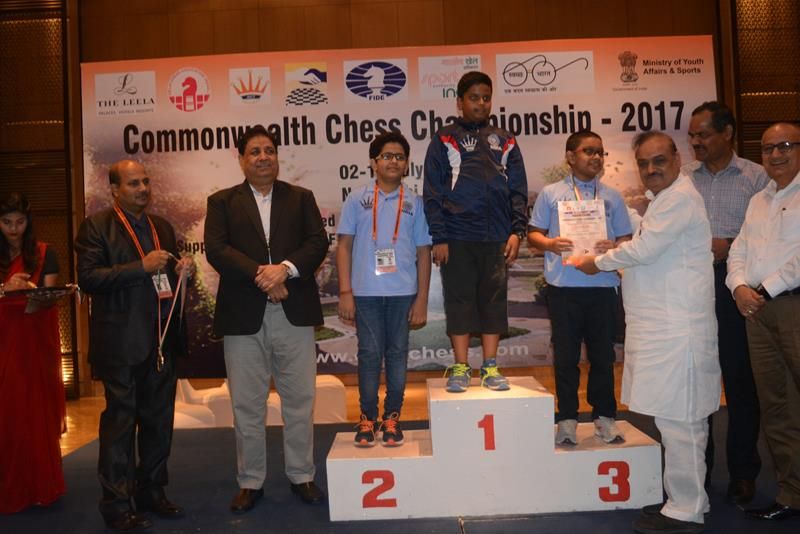 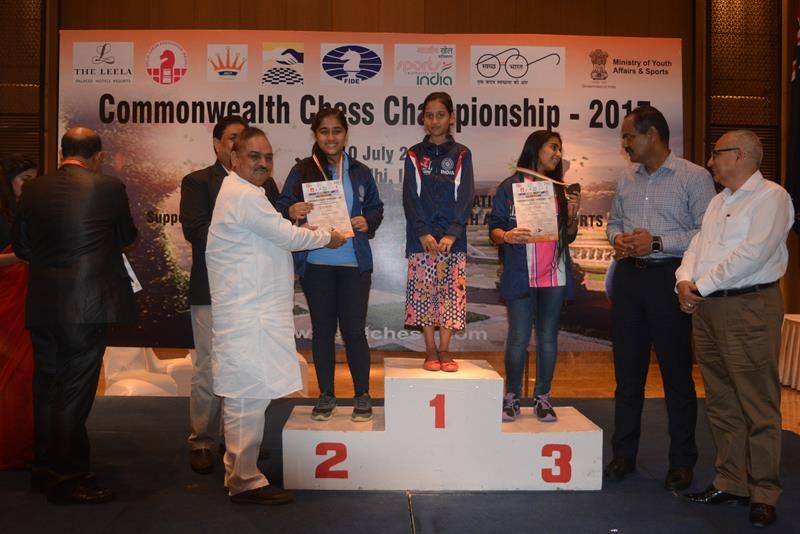 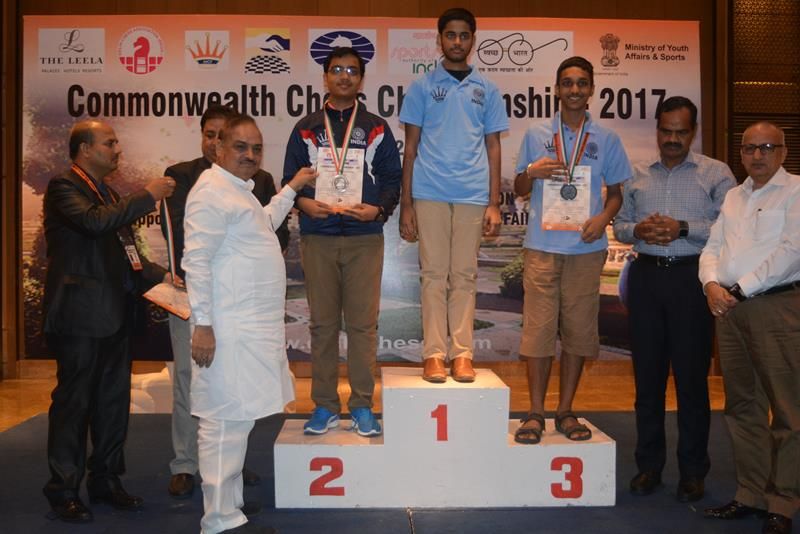 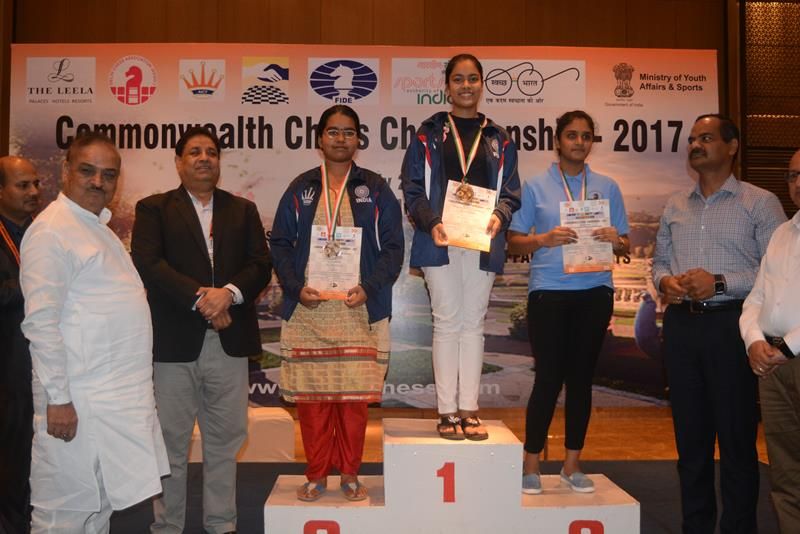 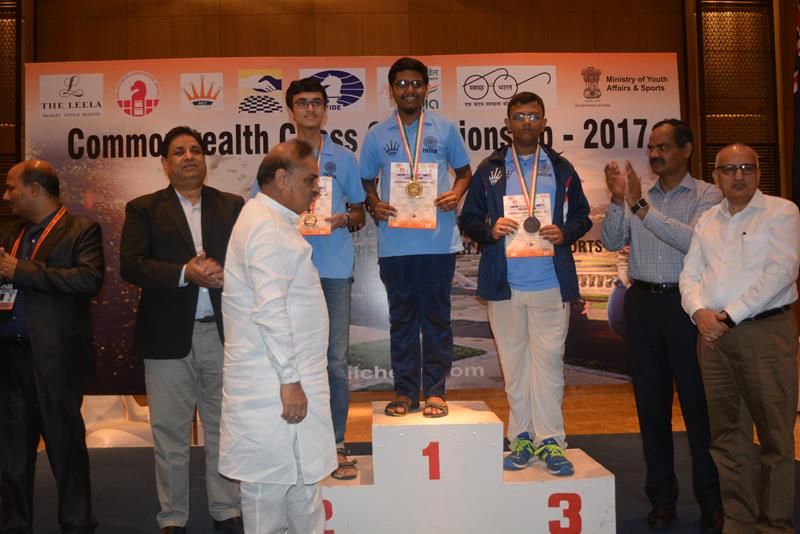 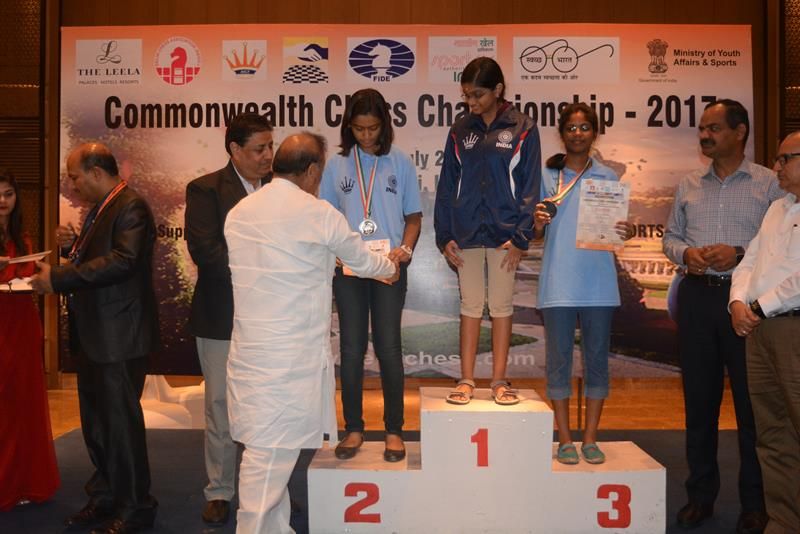 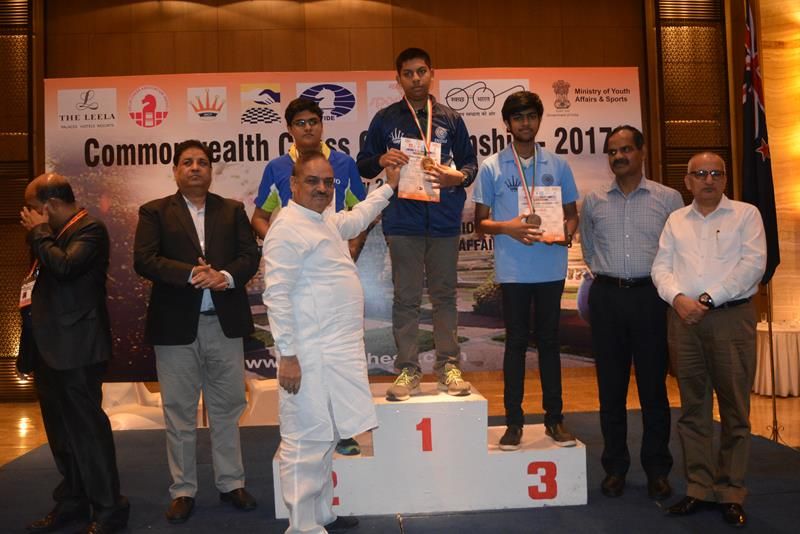 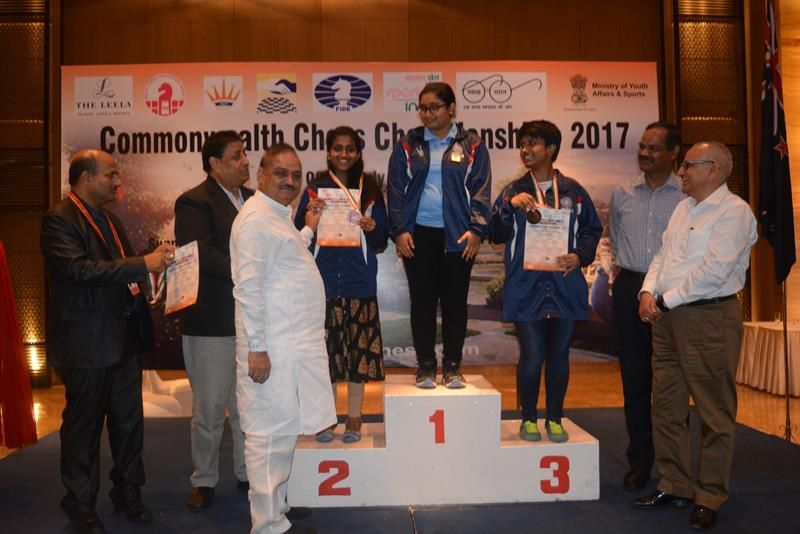 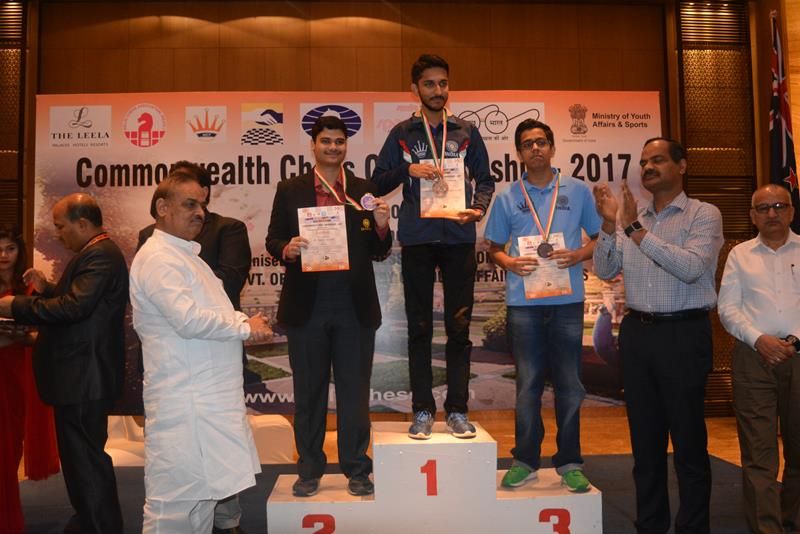 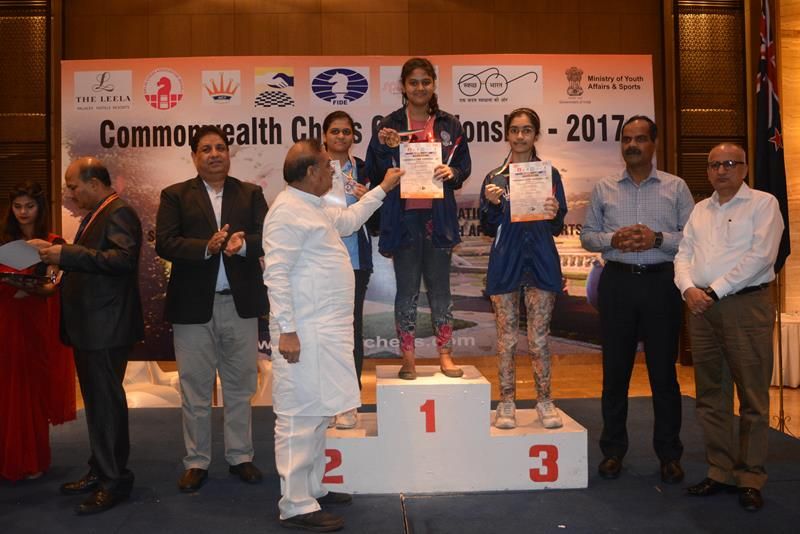 Following live games of the Commonwealth had been made very easy. All you needed to do was click on the link below. Apart from just watching the live games, you can also view the games of the previous rounds (and download them if you are a ChessBase Account Premium Member). There's also some light analysis of the games done by using the Tactical analysis feature.

Replay the games live by clicking on this link

Round seven: Abhijeet Gupta all set for his fourth title

Round eight: Commonwealth Chess 2017 heading towards an exciting finish 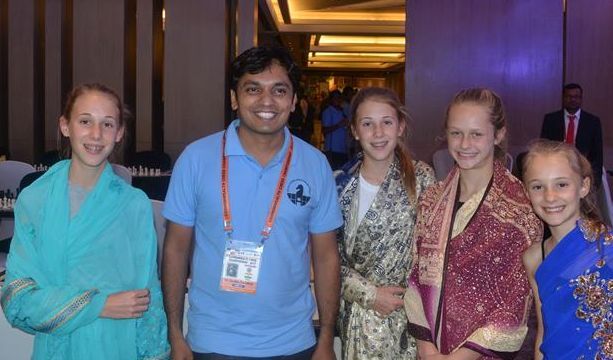