At the start of the rapid leg of the Tal Memorial, we discussed how Viswanathan Anand, with his ongoing form in the rapid time control, would be able to bring back the Riyadh magic in Moscow. Well, guess what? The Tiger from Madras has done it again! Going into the final day, the race was mainly between Mamedyarov and Anand who were both co-leading the tournament. After quick draws in round 7, it was the penultimate round which decided the fate of the event. While Anand defeated Grischuk, Mamedyarov was defeated by Dubov, leaving him virtually no chance at the title. An illustrated report.

After a stunning win at the World Rapid Championship a couple of months ago, Viswanathan Anand proved his prowess in the rapid time control yet again winning the Tal Memorial in Moscow, Russia. Just like in Riyadh at the World Rapid Championship, it was a win in the penultimate round and a quick draw in the finale that secured Anand the victory. Curiously enough, both in Riyadh and Moscow, Anand defeated the same opponent to take lead over the field: Alexander Grischuk. And just like in Riyadh, there was no time for Anand to celebrate his victory because the Blitz tournament begins the very next day! 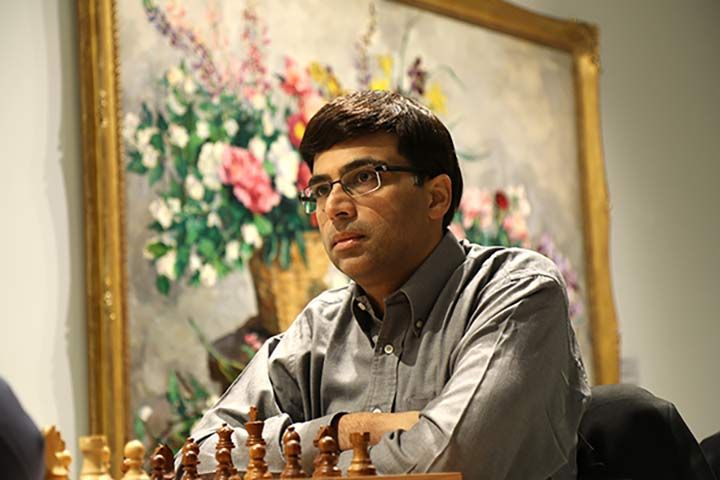 Anand's only decisive game on the final day was his game against... | Photo: Amruta Mokal 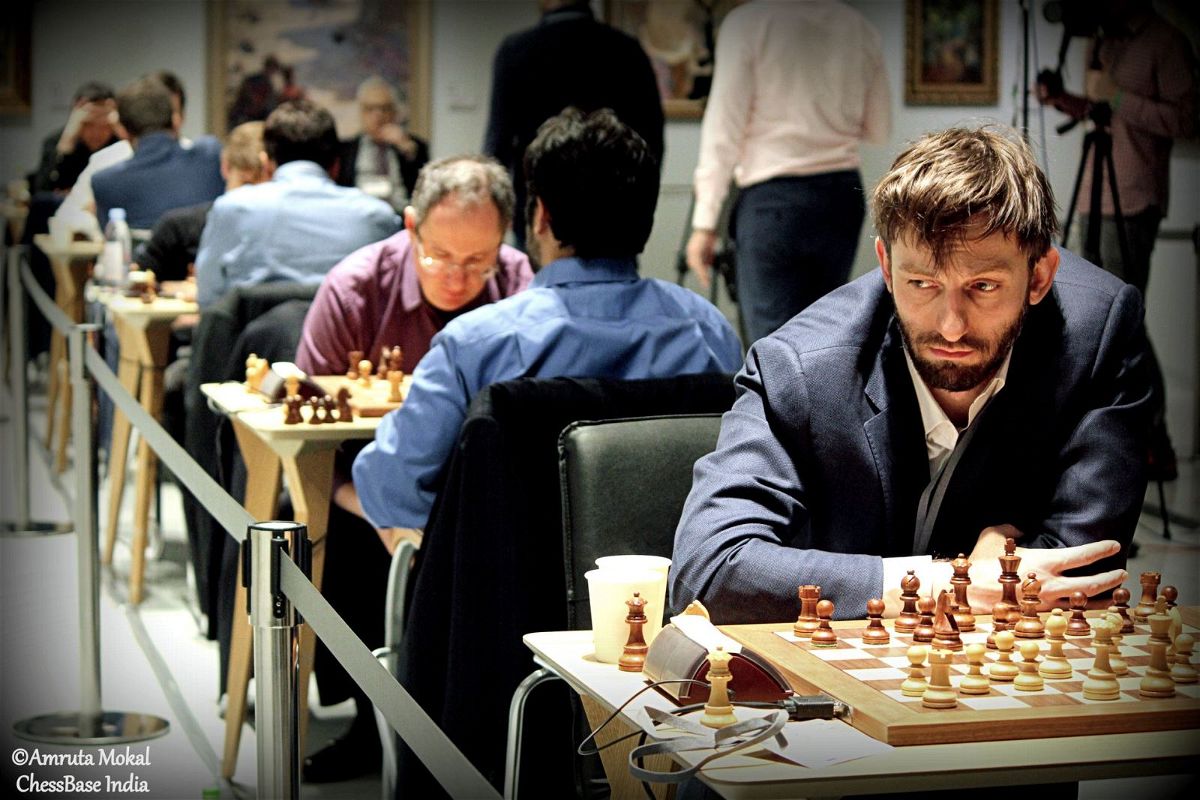 In the first round of the day, Anand decided to play solidly in the opening with the black pieces against former world championship challenger, Sergey Karjakin. In response to Karjakin’s king’s pawn opening, Anand went for the Berlin Defence and the opening soon transposed into a kind of hybrid between the Berlin and the Giuoco Piano. 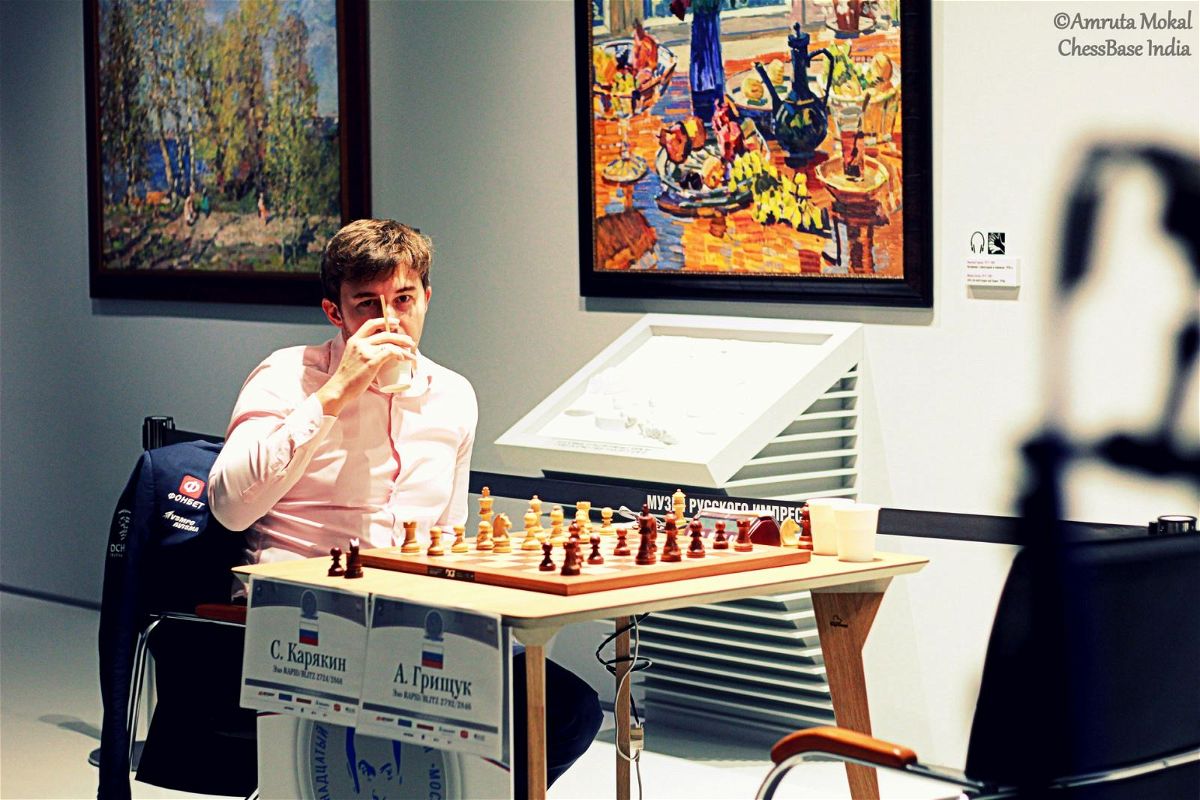 The game per se was rather tepid. Neither side really got an advantage out of the opening and after a trade of a couple of minor pieces and a rook, players almost immediately decided to sign peace.

Anand’s co-leader until this point, Shakhriyar Mamedyarov also drew his game against Boris Gelfand in this round. And this too was a quick draw that lasted merely 17 moves. Going into the penultimate round, both Anand and Mamedyarov were tied for first with 4.5/6.

It was the penultimate round that broke the tie at the top. Anand, who had the white pieces in this round, went all out for an attack in his game against Alexander Grischuk. Facing the Sicilian Defence for the second time, Anand chose the same sideline – the Rossolimo – that he had played against Daniil Dubov when he was faced with the Sicilian previously in the tournament. Soon, kings were castled on opposite wings and both players began storming their pawns and pieces towards the enemy king in an attempt to deliver checkmate. 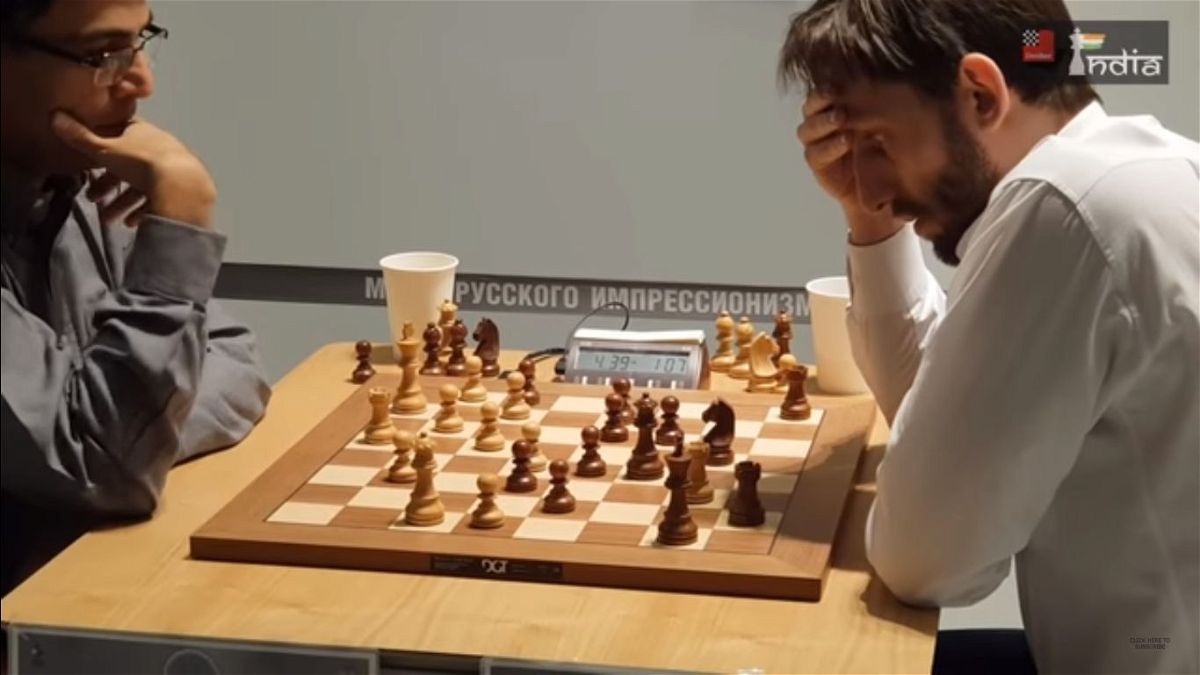 It was very apparent by Grischuk's expression that he had not seen 28.Rxf7 coming

On his 23rd turn, Anand, to open up lines against Grischuk’s king, gave up a pawn and created some interesting complications. Even though the computers evaluated the position to be better for black a couple of moves after the sacrifice, it did succeed in confusing Grischuk. On his 26th turn, Grischuk blundered horribly and allowed Anand to play out a splendid combination that involved a knight and a rook sacrifice to achieve checkmate. Going by Grischuk’s reaction during the game, it was apparent that the Russian GM had missed the sequence and only realized what a pickle he had got himself into after Anand sacrificed the rook on the 27th move.

Talking about this beautiful tactical combination, Anand said, “When he played 26…Rg8, my heart went racing. To be fair, he lost a tough struggle after the game but he still congratulated me. I think that’s very, very sporting on his part.”

Besides, Anand’s glorious win, there was another decisive result in the round which almost decided the fate of the tournament: Shakhriyar Mamedyarov vs Daniil Dubov. Dubov, who had lost two back to back games the previous day had had a 106-move-long marathon of a chess game in the previous round against Ian Nepomniachtchi. But despite all of this, he went for the complicated lines of the Benoni – the ‘son of sorrow’ as it is called – to counter Mamedyarov’s Queen pawn opening. Mamedyarov had the edge out of the opening thanks to his passed d-pawn. However, Dubov was able to encircle this passer and eventually hack it off the board soon. A few inaccuracies in the middlegame put Mamedyarov in some trouble. He did manage to liquidate into a double rook endgame with equal pawns but even here, Dubov’s rooks were far more active. By the 51st move, Mamedyarov was two pawns down and decided to throw in the towel. 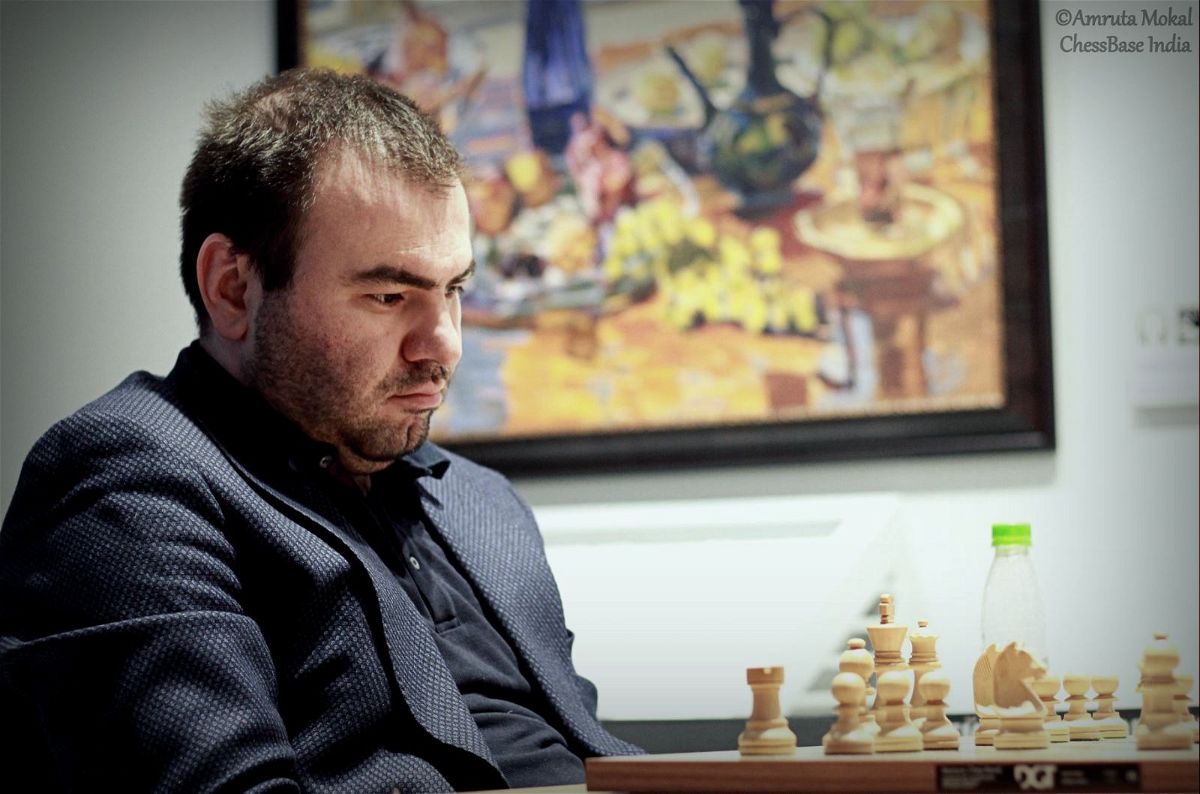 With this loss, Mamedyarov, the only title contender in the tournament besides Anand, was virtually thrown out of contention by... | Photo: Amruta Mokal 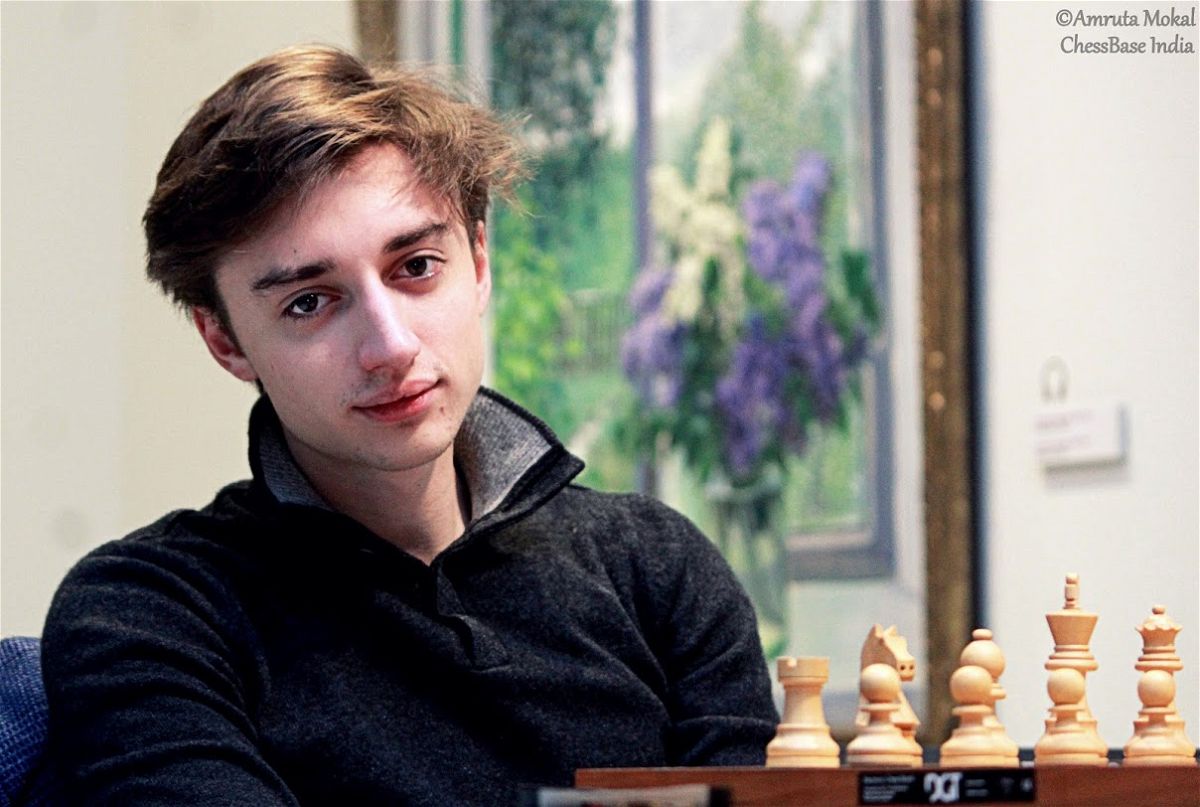 For Mamedyarov to have any chance at the title, not only would he have to win his final round game but also pray for Anand to lose. Since Anand was a full point ahead of his nearest rival, even a draw was sufficient for him. 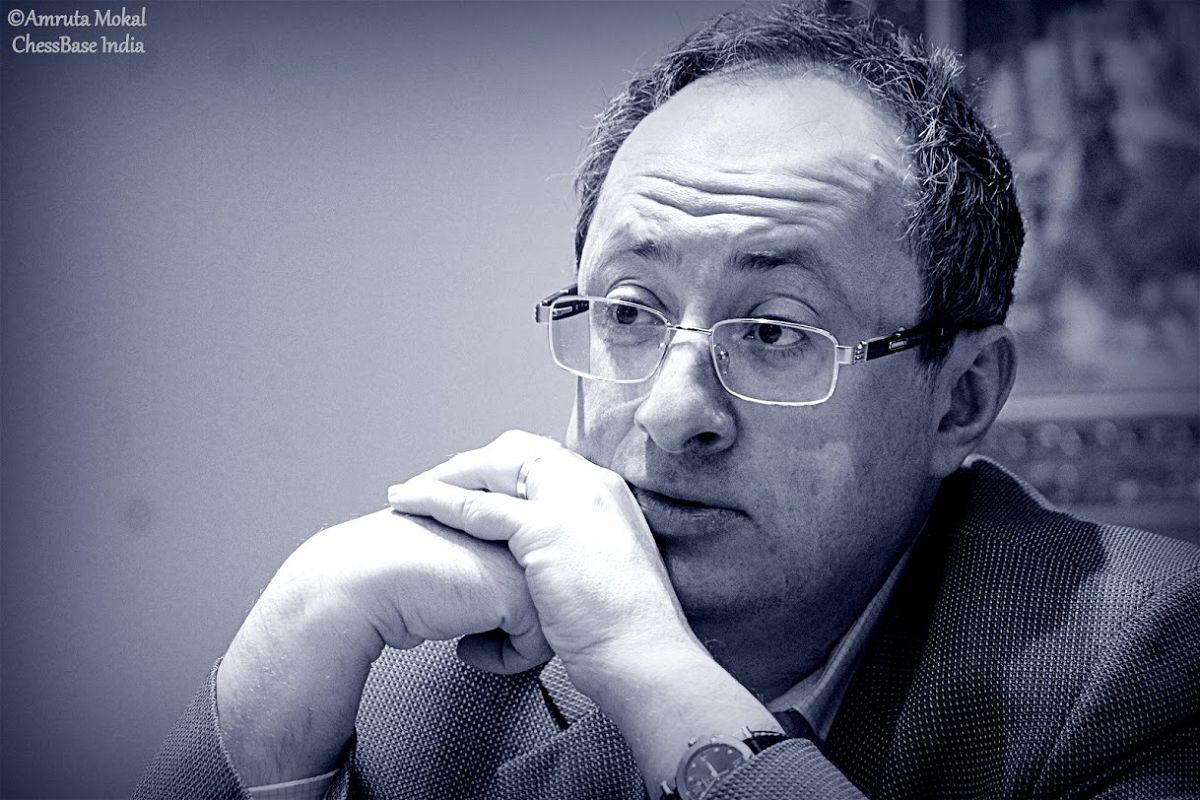 In his final game, Anand went for the Flohr-Mikenas system of the English yet again with the black pieces against Boris Gelfand | Photo: Amruta Mokal

The position got complicated very soon and Anand felt he had a slight edge out of the opening. However, given the tournament situation, he said after the game that he did not bother continuing and offered a draw which was accepted, thereby making him the champion of the rapid leg of 2018 Tal Memorial. The game merely lasted 15 moves.

“It went well. At the crucial moments, when I needed a win, I got it. And sometimes, it feels that you have momentum on your side; it feels very nice,” Anand said talking about his experience at the Tal Memorial.