The future of chess books (1)

People are urging me to write a book (or books) with stories about my encounters with famous players. And with puzzles and chess pleasantries. Most of the material has appeared on our news page, but the articles have descended into the obscurities of the archives. So people want a collection in printed form, to read in the garden, in bed, on trains. But what about the chess games and moves? Who is going to set up a board to replay them? Ahh, but perhaps there is a solution, a way to make printed games easily replayable. Curious? Here's what that would (will) look like. 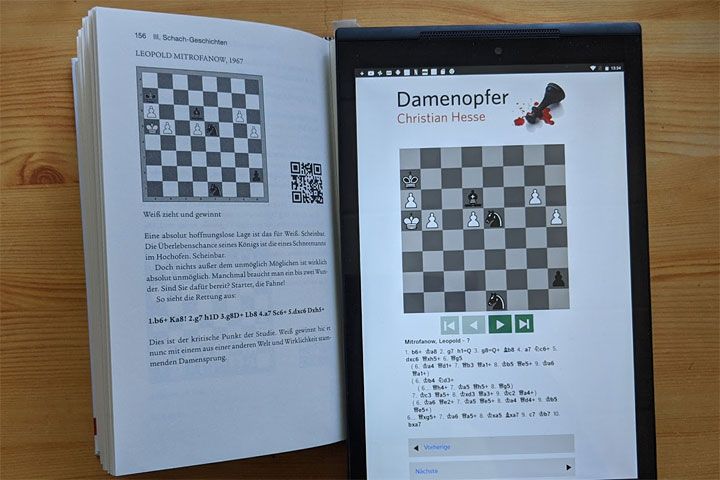 Let me say in advance: I have grown up with books. From the start I was a bibliophile, fanatically so, and in the course of a lifetime have collected many thousands of books – including chess books, which for decades have been sent to me by friendly publishers. To these (the chess books, not the publishers) I have always had an ambivalent relationship. On the one hand they brought me a great deal of pleasure. On the other I was distressed by the colossal waste they represented. 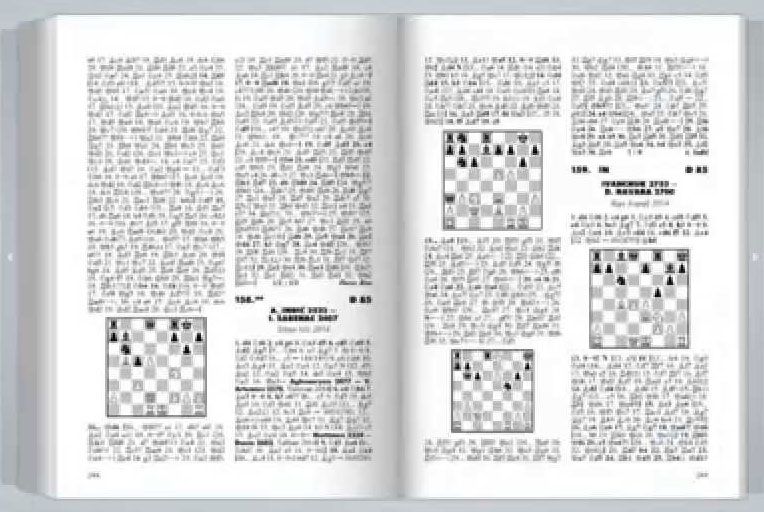 Take for instance the famous and for a long time ubiquitous Chess Informant. I bought it regularly. The picture shows what the contents looked like. It also tells you how much of the approximately thirty volumes I collected I actually read. Close to zero percent. I did look at a lot of diagrams and try to follow the next three to five moves in my mind, but that was it.

I did notice that a certain percentage of the visitors in my house, the ones who had GM titles, and especially the super-GMs, read my Informants like Agatha Christie novels. Anand, for instance, would grab the latest Informant, curl up in a corner, and spend hours giggling and laughing at games he was replaying in his head. Nobody, really nobody, ever pulled out a chessboard to replay games. Either they could replay everything in their minds, or they used my method of diagram scanning.

So just a small percentage of chess players actually read chess books or magazines. When's the last time you set up the chess board (I'm not sure exactly where mine is) and pieces (those I can find – I have two very nice sets in the shelf behind me) and replayed a game from a book? The situation has been exacerbated by the advent of replayable games in software and on web pages. That is so easy and so convenient that it is hard to find a proper place for books in the chess landscape.

So are chess books and magazines on the way out? Because you cannot replay moves, like you can do on any good web site? No, you actually can, if the publishers spend a miniscule amount of effort on it! Let me explain.

Everyone who buys a chess book has the ultimate replay device in their pocket, or on the coffee table. It is a smart phone or a tablet. What if you could use these, instead of setting up the chess board and pieces, to replay the game in the books? No mistakes, no tedious attempts to find your way back to the main line when you have been looking at analysis. Everything is automatic, just like on a replay board on your computer screen.

I am not the first person to think about this. Take a look at the paper "A Framework for Recognition and Animation of Chess Moves Printed on a Chess Book" by Süleyman Eken et al. It was published (in 2015) by the International Arab Journal of Information Technology and proposes "a set of techniques to animate chess moves which are printed on a chess book. These include (1) extraction of chess moves from an image of a printed page, (2) recognition of chess moves from the extracted image, and (3) displaying digitally encoded successive moves as an animation on a chessboard." It's all pattern recognition, and with AI today the process could be made very efficient.

But is that what I am looking for? You use your phone or tablet to scan a page, with an AI app to find the chess game and make it replayable? No, there must be an easier, non-technical way. And there is. The chess book author needs to provide the games and moves in replayable form to the reader, and the reader must have instant access to them. The solution: QR codes.

Once again I am not the first person to come up with this solution. When thinking about using QR codes in the chess books I might end up writing, I remembered that it had already been done, very nicely, by my friend Prof. Christian Hesse (who writes very entertaining books on mathematics and on chess). And I get them all from him. Searching through the twenty or so I own I found Damenopfer, written in 2015. 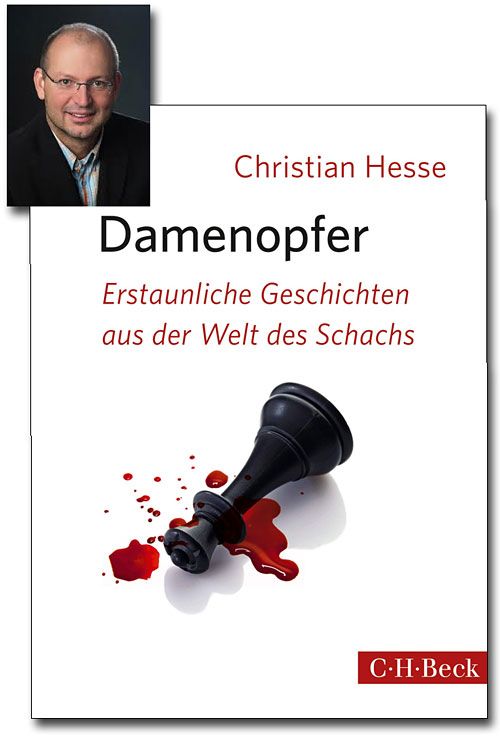 "Damenopfer" is "Queen Sacrifice" and the subtitle translates to "Astonishing Stories from the World of Chess." It is a thoroughly charming collection of examples where surprising sacs play a decisive role – if you understand German it is well worth buying ($12.40).

The thing about Damenopfer is that, for the first time, every single game in the book contains a QR code for you to scan. Within a second or two you have the game, moves, and the entire analysis, on your mobile phone, in a bus, in the garden, anywhere. So you read the stories in the book and then replay the games on your electronic device. Let me give you an example:

Here are two pages I scanned from the book (click to enlarge). In case you don't know the German piece letters: KDTLS = KQRBN. Now try reading the two examples: 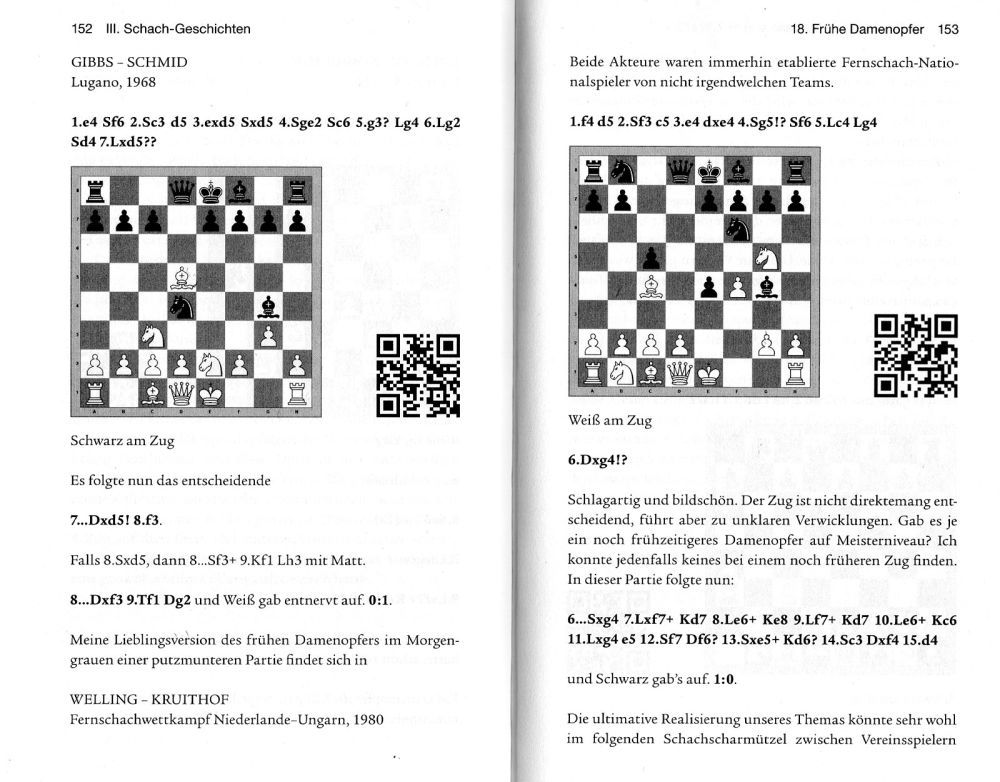 Chances are you can manage the first pretty well, but the second is more difficult playing through in your mind.

Now whip out your mobile phone or tablet. Check if you have a barcode or QR code scanner installed. Chances are it is already there, but if it isn't get one of the dozen or two available for free in the Apple Store or Google Playstore. Takes a couple of minutes to download and install – and of course you only need to do this once. After that you can use the scanner for all kinds of thing, e.g. read reviews of products in stores, scan grocery packages for recipies, etc. But you can also point your phone or tablet at the pages above. The scanner will automatically read the QR code and ask you whether you want to proceed to a page. That will take you to a special replayer for the game in question.You can play through the moves, tapping on the replay keys or on the notation below the chessboard. Very nice, don't you agree?

The two examples above may be just about manageable, following the moves in your mind and enjoying the beautiful tactics. But what about the following:

I just give you the diagrams and the QR codes. In the first case (White to play and win) Christian writes: "It looks like a perfectly hopeless situation for White. The chances for the white king to survive are the same as for a snowman in a blast furnace." And he goes on to show us the truly incredible moves White must make to acrtually win: 1.b6+ Ka8! 2.g7 h1=Q 3.g8=Q+ Bb8 4.a7 Nc6+ 5.dxc6 Qxh5+. "This is the critical point in the study," he writes, "White wins with a queen move that comes from a different world and a different reality." 7.Qg5!!! "The queen, dressed in a kamikaze outfit throws herself in between." Hesse give a three alternate lines explaining why the queen moving to g5 is the only way to win:

Beautiful, isn't it? What, you did not follow everything? Then use your phone or tablet to see all the moves and variations on a nice graphic chessboard. Incidentally, this is one of my all-time favourite studies.

The second example, on the right in the above scan, is a 27-move game with seven additional moves to show why Black resigned after a firework of sacrifices. Can be easily followed on the printed pages – by a GM, but not by me. But I can scan the QR code image next to the diagram and immediately replay everything on my phone. Try it, it is dazzling how White played 14.Kf1!!! to initiate the sacrifice tornado. 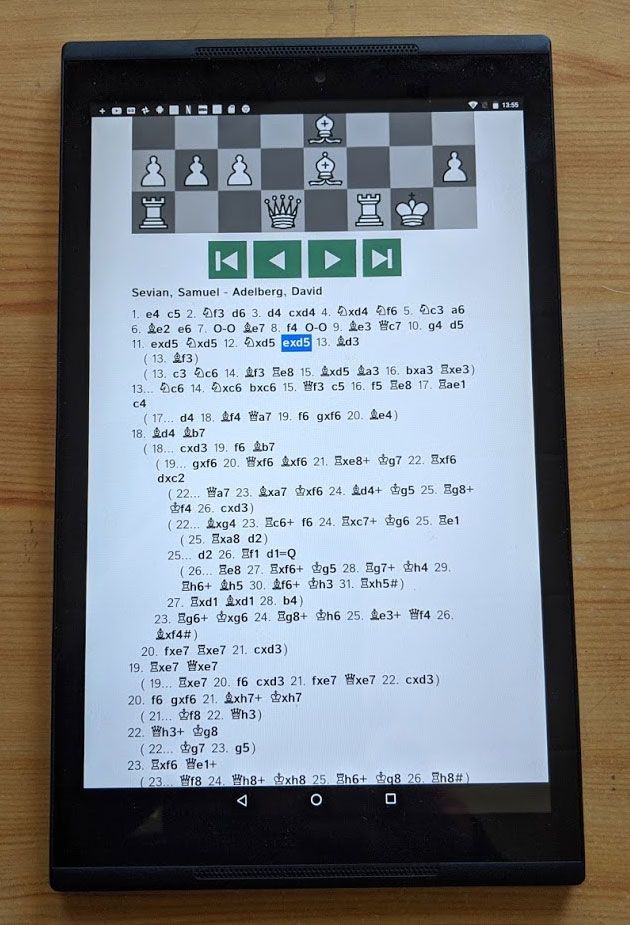 In the book Hesse explains why 14.Kf1 (which he gave three exclams) was necessary – in order to avoid a bishop check nine moves later. This is explained in the book, while the moves can be replayed on your phone or tablet. After a five-second scan.

After getting re-hooked on Christian Hesse's book and playing through a dozen examples I realized I had the solution to my dilemma: how to produce a book in which people will not ignore most of the chess content – where they can actually play through all the games given.

So this is how I can produce my book – in fact in greater quality than in Hesse's book. That was published five years ago and a lot of progress has made since then. I also discovered how easy it is to implement: adding replay code takes me a average of a minute and a half per game. And readers get instant access to tools no chess author dreamed of, until a few years ago.

How I plan to use these tools – and how you can do the same for books and magazines – that will be the subject of my next article. I will also give you a couple of trial chapters which you can print out and use. And in return you can tell me what you think of the project.