After the successful start last year, the NC World Masters will be expanded in Dortmund in July 2022: The two world chess champions Vladimir Kramnik and Viswanathan Anand will meet two more strong grandmasters in a double-round tournament: the winner of the NC Sparkassen Online Open 2021 Krishnan Sasikiran (India) and local hero Daniel Fridman (Germany). After the successful start last year, the tournament will be dominated by the innovative chess variant without castling. 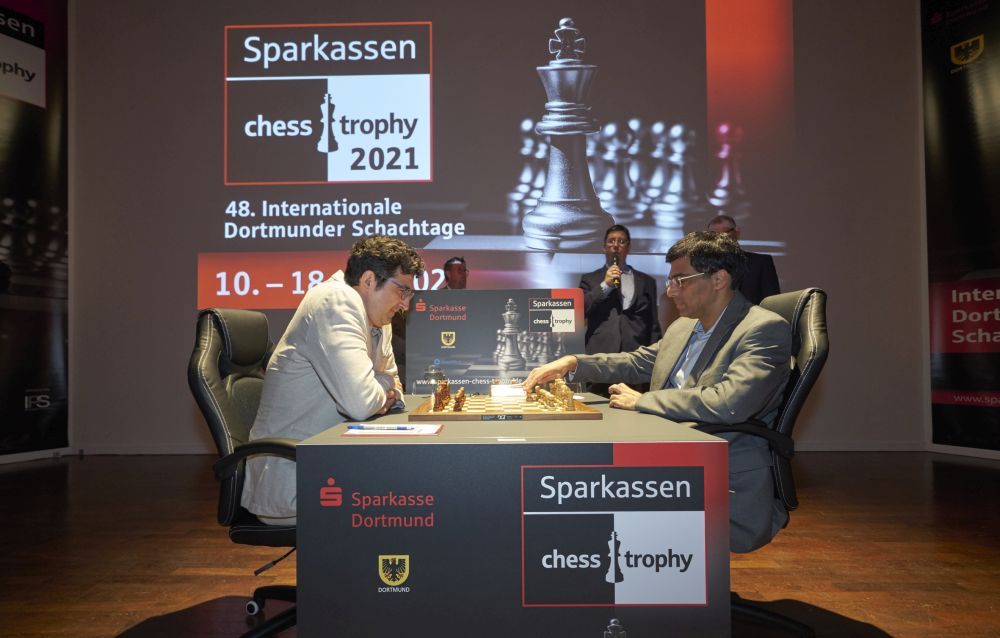 In addition, top German players will compete with international grandmasters in the Deutschland Grand Prix. The open tournaments will return as Sparkassen Open A and B, so that every chess enthusiast will have the chance to participate. Together with the Sportland NRW Youth Cups, numerous events will take place from 16 - 24 July 2022 at the Westfalenhallen congress centre in the heart of the Ruhr region.

"After the successful kick-off last year, we are looking forward to a great chess event in the tradition of the 90s. The Duel of the World Champions will be extended and this year we want to offer the framework for large open tournaments again. Our goal is to break the participation record from 1992 with 541 players," says event director Carsten Hensel, looking ahead to the 49th International Dortmund Chess Days. It is a matter of concern for the entire team to welcome chess players from near and far to Dortmund and to give them the opportunity to experience some of the greatest players of all times up close".

NC World Masters in focus at its second edition

After winning last year, the 15th World Chess Champion Viswanathan Anand is aiming to defend his title in the innovative mode of “No-Castling Chess”. In the double-roundtournament, he will once again face the 14th World Chess Champion, Vladimir Kramnik, with classic time control to play. The field of participants will be expanded by the winner of the Sparkassen Online Open 2021 in NC chess, Krishnan Sasikiran from India. The fourth participant is the Ruhr-based German top Grandmaster Daniel Fridman, European Team Champion with Germany in 2011.

“No-Castling Chess” is the brainchild of Vladimir Kramnik, who worked with the world´s leading artificial intelligence (AI) company DeepMind and its system AlphaZero, to explore the possibilities of the variant. DeepMind will once again sponsor the No-Castling tournament.

Games played with the rule change thrilled both players, spectators and players in the online open last year. Demis Hassabis, CEO and founder of DeepMind, said: “It was incredibly exciting to see world-class players like Vladimir Kramnik and Viswanathan Anand play the No Castle chess variant explored by AlphaZero. The games were fresh and original [with some incredible king travel]. I´m looking forward to watching this year´s expanded tournament in Dortmund and hope the games spark the imaginations of players everywhere.”

As a second event highlight, the "Deutschland Grand Prix" will be held, just like last year. Young German national players will compete with the extended world elite in classical chess.

Tournament director Andreas Jagodzinsky already has confirmations from last year's winner Pavel Eljanov (Ukraine) and the strongly performing runner-up Dmitrij Kollars (Germany). A total of seven invited grandmasters will compete in the German Grand Prix. The uneven number of participating players provides a special treat for the chess fans: the player who is not playing will be on site as a co-commentator to provide live commentary on the games in progress. He will then support the main commentator Artur Jussupow (Germany). Jussupow is a great figure in national and international chess, as a top ten player he has reached the semifinals of the World Championships three times and is considered one of the most popular chess trainers and chess authors worldwide.

With the Sportland NRW Cups, two other well-known formats from the previous year will be further developed. Young German talents will be given the opportunity to compete with strong title holders and earn title norms. In addition to a 10-player round robin tournament, a Sportland NRW Girls' Cup will be held to provide special support for young female players. Both tournaments are supported by the state of NRW and its "Sportland NRW" initiative.

Aimed for record number of participants due to the Sparkassen Open

The association "Initiative Pro Schach" (IPS) with its chairman Stefan Koth and event director Carsten Hensel not only wants to promote top chess, but also to place popular chess within the framework of the Sparkassen Chess Trophy. For this purpose, Sparkassen Open A and B will return this year: both an open A-Open for players with a playing strength of 1900 DWZ/Elo and above and a B-Open for players up to 1900 DWZ/Elo will take place in the congress centre of the Westfalenhallen Dortmund. 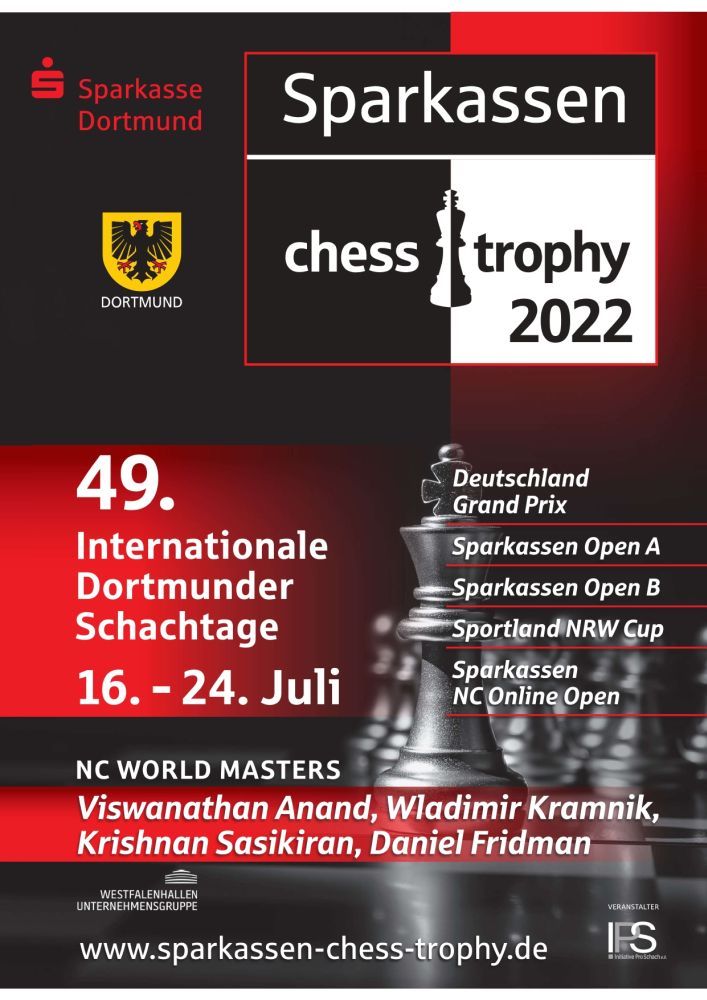 Besides tournament director Andreas Jagodzinsky, Christian Jochmann has been won as tournament manager for the organisation of the open tournaments. As the organiser, IPS e.V. is aiming for a new participation record. At the legendary event in 1992 - the 20th International Dortmund Chess Days - a total of 541 participants were at the table at the same location in the various performance classes of the open tournaments: this year, with 600 participants, a new record is being aimed for in Dortmund.

Already in the run-up to the events on site, a large digital tournament will be offered for the second time: The Sparkassen NC Online Open. It will be accessible worldwide on the servers of lichess.org and will take place in chess without castling and with short time controls. The tournament already featured prominently in 2021 and the winner Sasikiran played his way into the limelight, so that he is now invited to the NC World Masters. The event will give everyone a chance to try their hand at innovative no-castling chess and will provide further exciting insights into the format.

The tournament will be timed ahead of the physical events at Westfalenhallen, likely taking place at lichess.org in May/June 2022. There will be three open preliminary tournaments in the Swiss system. The best players of the preliminary rounds will qualify for the grand final. Further details, including the exact timeline and the announcement, will be announced by IPS in due time.

Since last year, not only the sporting concept has been revolutionised, but also the entire communication has been intensified together with the aforementioned partners. After the popular interview videos from last year, a high-class live commentary directly from the venue will be added in 2022. Besides Jussupow, Sebastian Hensel as technical director and Patrick Zelbel as press spokesman will take care of the communication. The team will be supported by Fiona Steil-Antoni (Luxembourg). She is not only a strong chess player herself, but also an internationally renowned personality in chess as a commentator, streamer and blogger. Furthermore, the former blindfold chess world record holder Marc Lang and Nicolas Lagassé could be won for the team.

Hygiene concept for a safe event

The regulations in force at the time of the tournament apply and we are bound by them as organisers. Should these make it impossible for individual participants to take part, the organisation will of course refund the entry fee after informing the player before the start of the tournament. If players are travelling from abroad, they are kindly asked to observe the applicable travel regulations and, if applicable, the valid vaccination status.

All further measures will be developed in close cooperation with the venue. A highperformance filter and ventilation system will ensure that the air is changed several times an hour. Sparkassen Open A and B will be separated in time, so that large distances between respective boards are ensured and participants are not seated too close to each other. IPS will keep interested players and visitors regularly informed about the requirements.

As a supporting programme, an evening with the participating stars and invited guests is planned for the rest day, Thursday, 21 July. Sabine Oecking is involved in this as artistic director of the event.

Participation of Russians and Belarusians

In accordance with the practice of the world federation FIDE, the German Chess Federation and comparable tournament organisers, chess players from Russia and Belarus are in principle entitled to start in individual competitions. They then compete under the neutral flag of FIDE.

This applies to participation in the already announced open tournaments and the planned online open in NC format and also to the participation of Belarusians and Russians in the closed tournaments NC World Masters, Deutschland Grand Prix as well as the NRW Youth Cups (boys and girls). All competitions are played in accordance with the relevant practice of the World Federation.

IPS e.V., as organiser, fulfils already existing contracts and agreements according to these standards, as long as German law does not conflict with this procedure.