Sinquefield Cup 2018 Round 2: The Magic of Magnus Carlsen

Call it a coincidence but exactly a year back in the Sinquefield Cup 2017, Carlsen was white against Karjakin in round 2 and Carlsen won the game and led the event along with Caruana and MVL. Feels like the same thing has repeated as Carlsen won his game against Karjakin in what turned out to be the longest game of the round 2 and now leading the tourney along with Mamedyarov and Aronian! What promised to be an exciting round on a Sunday ended as a damp squib, as three of the games ended in 3 hours of play, while the last two games were not showing promise to become interesting at any point of time. And that’s what yours truly thought. IM V. Saravanan takes you through the intricacies of all the battles in this round 2 report.

The day started with a consultation with the players by Chief Arbiter Chris Bird, who wanted to make clear that in this Sinquefield Cup, draws by mutual consents are not allowed at all, unless in case of a threefold repetition or a position which is a ‘dead draw’ in an endgame. This was due to a self-revision of his decision to the draw between Nakamura and Anand from the first round, where he admitted that he made a mistake in allowing the players to sign the draw, when the final position was not a dead draw. This also meant that, even if the position offers no way to make any real progress, players are forced to move their pieces and play indefinitely.

Though Bird explained his position in detail, this throws up a very interesting question – how will an Arbiter know whether a position is a dead draw or not!? This means that, Arbiters will have to possess a good degree of playing strength too! But we are not going to debate that… 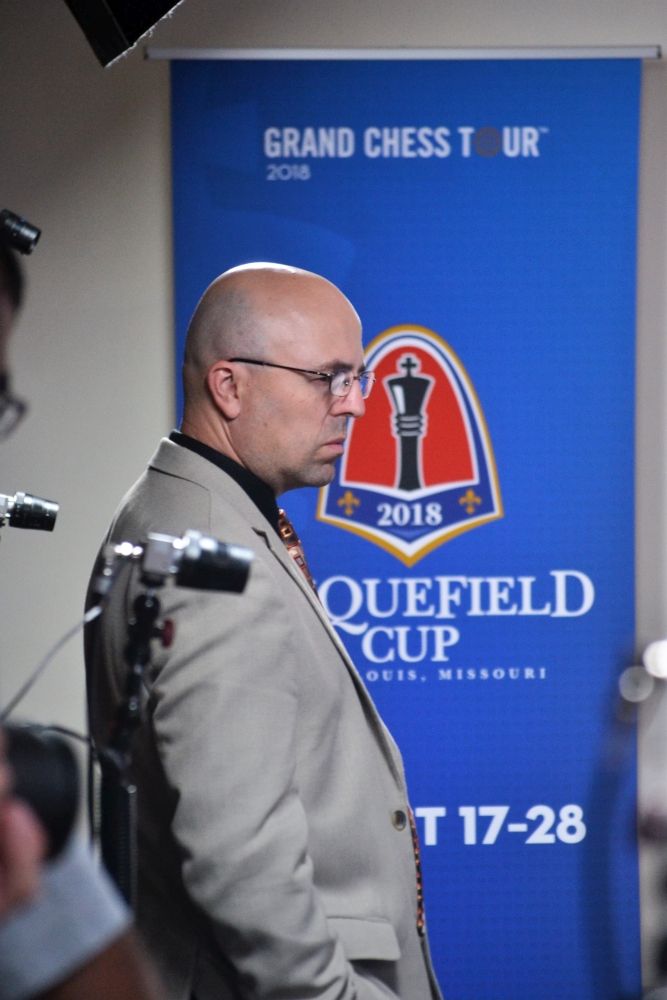 The most interesting game of the day looked to be Grischuk – Mamedyarov, where a sharp French was being played out. Grischuk didn’t seem well prepared in the opening, with Mamedyarov enjoying a time gain of 30 minutes in his clock by 12th move itself. And the game appeared to be a spectator’s delight when you look at it for its sheer optical mess: 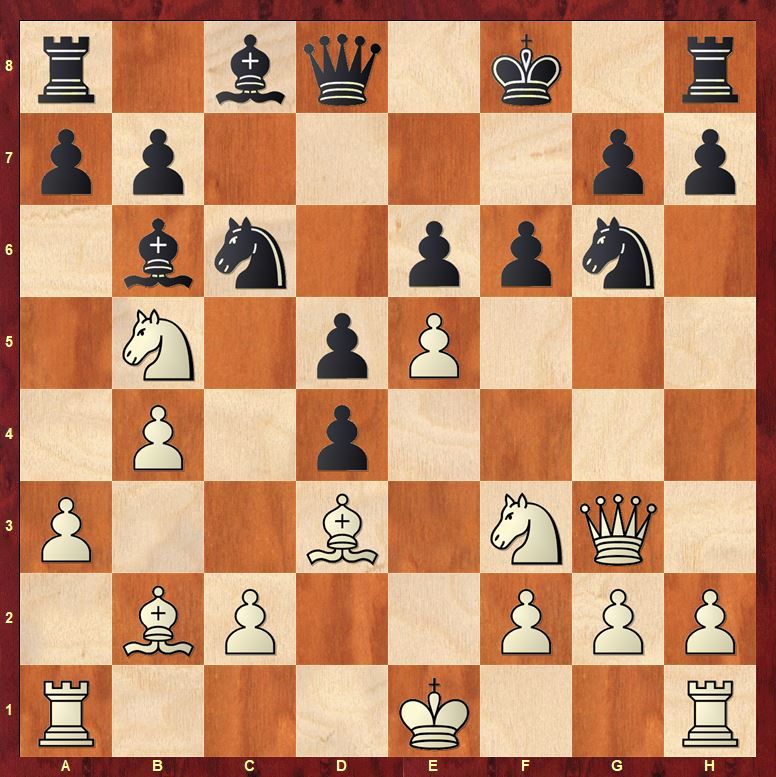 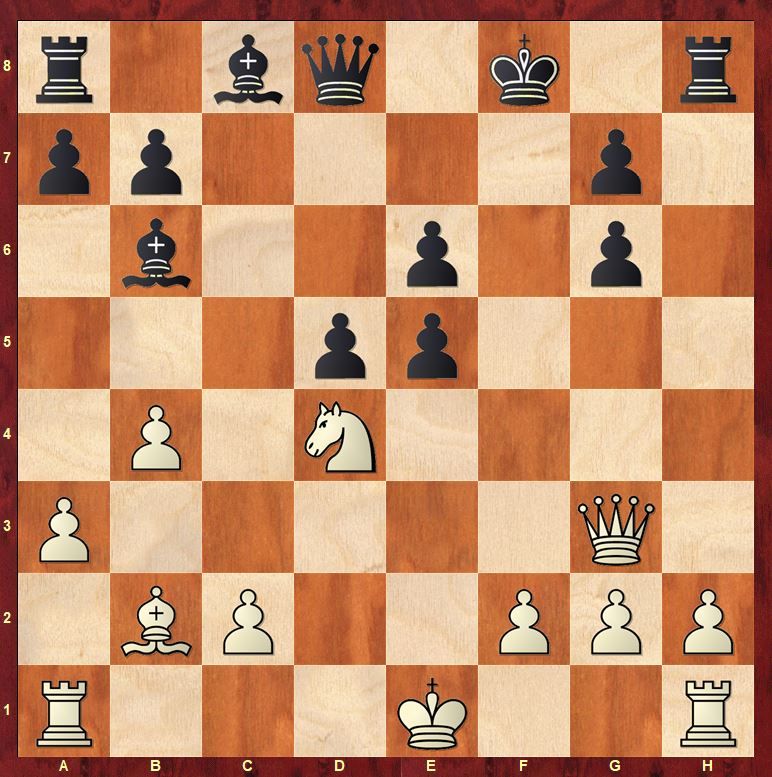 If at all there could have been an improvement for white, he could have played 16.Qxe5 here, instead of 16.Nf3 as played in the game. But Grischuk said, “16.Qxe5 Rh5 17.Nxe6 Bxe6 18.Qxe6 Qe8 and I considered this close to a draw, but probably was better than what I did”. 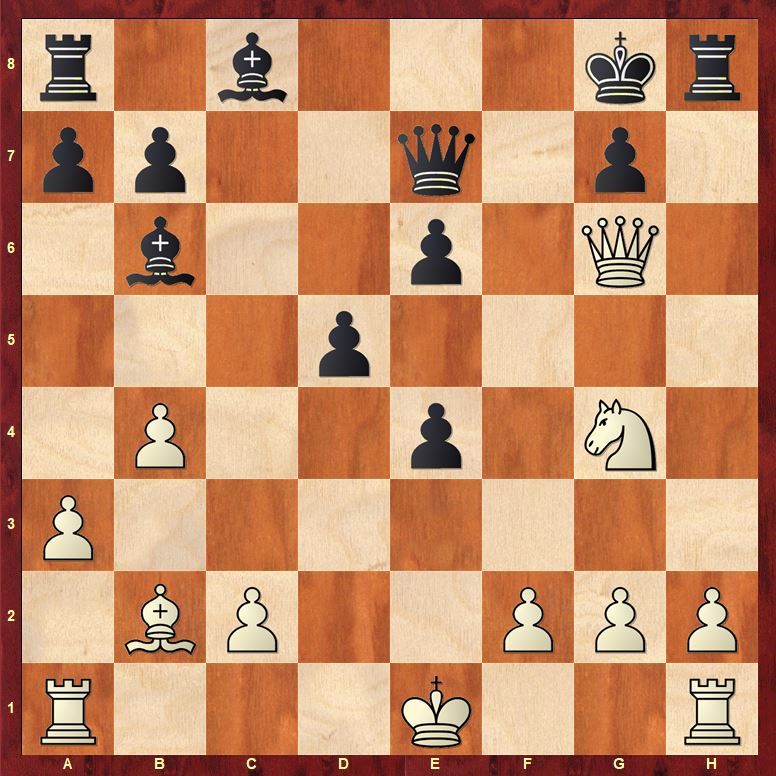 With his previous move, white threatens a perpetual check starting with Ng4-f6 & Nf6-h7, and Mamedyarov allowed it by playing 19…Bd7, when 19…e5!? 20.Nxe5 Be6 could have been a promising pawn sacrifice leading to complicated play. Grischuk admitted in a chat to chessbase later that he did not consider this seriously, but was optimistic with such a continuation, but he was not afraid of it. Even though Mamedyarov looked better prepared as he consumed less time in the opening stages, he curiously missed playing for more.

Speaking with characteristic candour in the postgame chat, Grischuk admitted that he had scant regard for the variation thrown at him today, calling it a ‘Joke Variation’ and insisting that’s how he has named it in his theoretical file. When I asked him if he expected this variation to be played at all, he retorted, “Of course you never expect such lines! I sort of (tried to) recall (my preparation), but I guess I didn’t manage!” When Vachier played his pet Najdorf, Vishy Anand showed he was battle-ready with the sharp 6.Bg5 variation after 9 long years! Once again, a lip-smacking fight seemed to be on the cards between these two Najdorf connoisseurs. 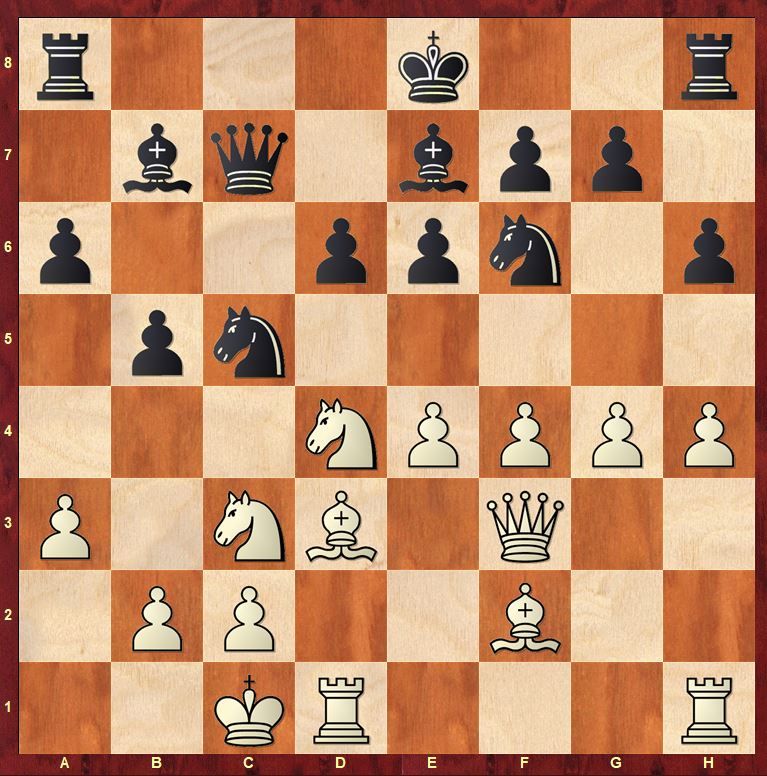 A real slugfest seemed to be on the cards here, and this was the identical position from the game Caruana – Vachier played just a week ago in the Saint Louis Rapid and Blitz.

Anand would later explain his opening choice with, “(Vachier) very predictable, he’s very stubborn about this line and that gives you a target. On the other hand, he knows it inside out, so it’s hard to surprise. … so I thought we could try something.”

Note the ‘we’ here – no super grandmaster operates without an army nowadays. But definitely expecting one of those famous Anand preparations, Vachier varied here with 15…Nxd3 16.Rxd3 d5 17.e5 Ne4 18.Be1 and it looked mildly pleasant for white here, due to his knight on d4 and black’s bishop on b7, though black’s knight on e4 is a compensating factor. 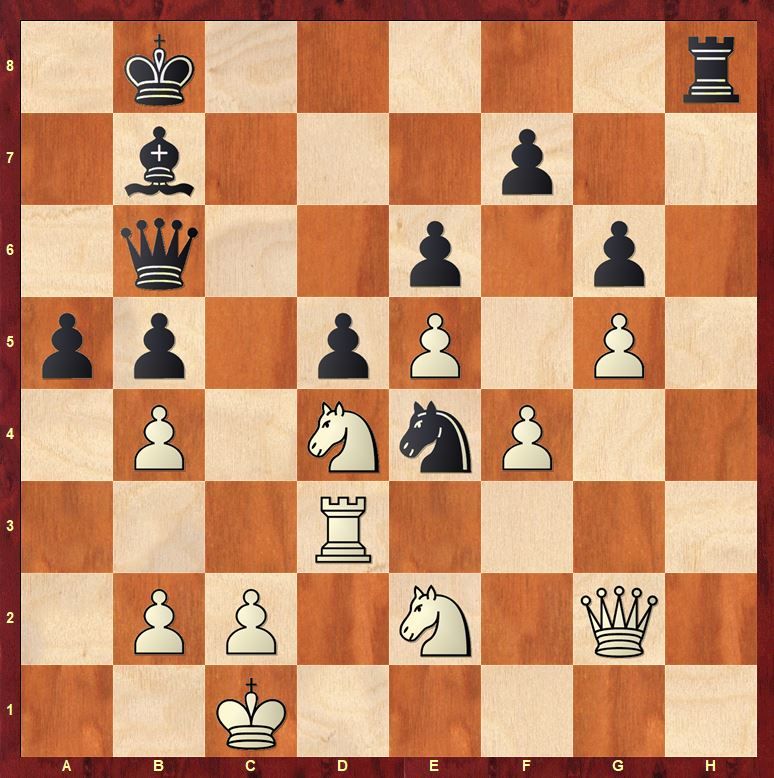 Wesley So seemed to want to steady himself after the loss in the first round, and kept it simple. 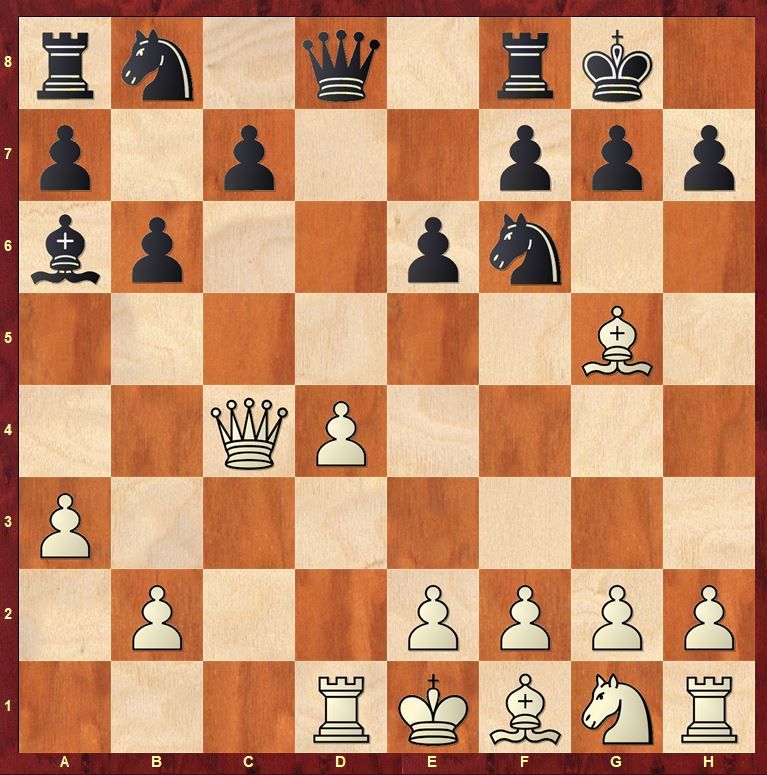 Mamedyarov – Nakamura went 10.Qa4 and ended in a short draw from Stavenger 2018 just a couple of month ago, and So’s deviation for the game was 10.Qc2, but nothing came out of it for white ultimately, the game ending in a draw in 31 moves.

These three games ended in draws in the first two hours of play, leaving out only a deleted tournament hall, disappointing for the Sunday crowd…whatever was present at the tournament hall. As I went to the tournament hall at this point, the positions too didn’t look all that inspiring. It all looked very normal. 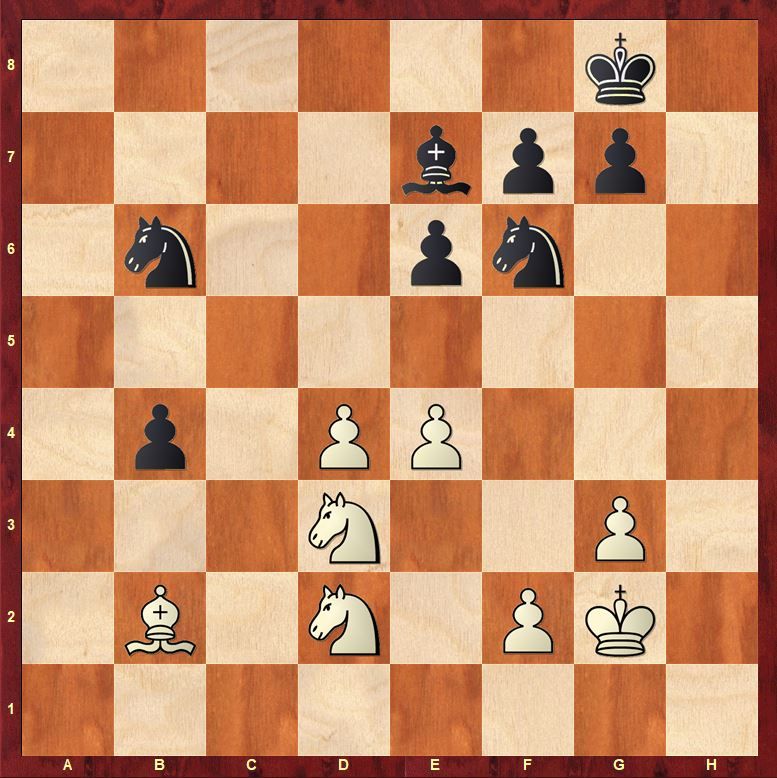 A result looked highly unlikely, that too from two guys who played a tournament last week, and who played long games yesterday. So, an obvious draw… the wish was granted in under an hour.

The other game had different elements. Karjakin had the toughest of tests – having lost with Aronian with black yesterday, he played black again, with a player against whom he fought for the world title last year. And his opponent was sitting with characteristic concentration: 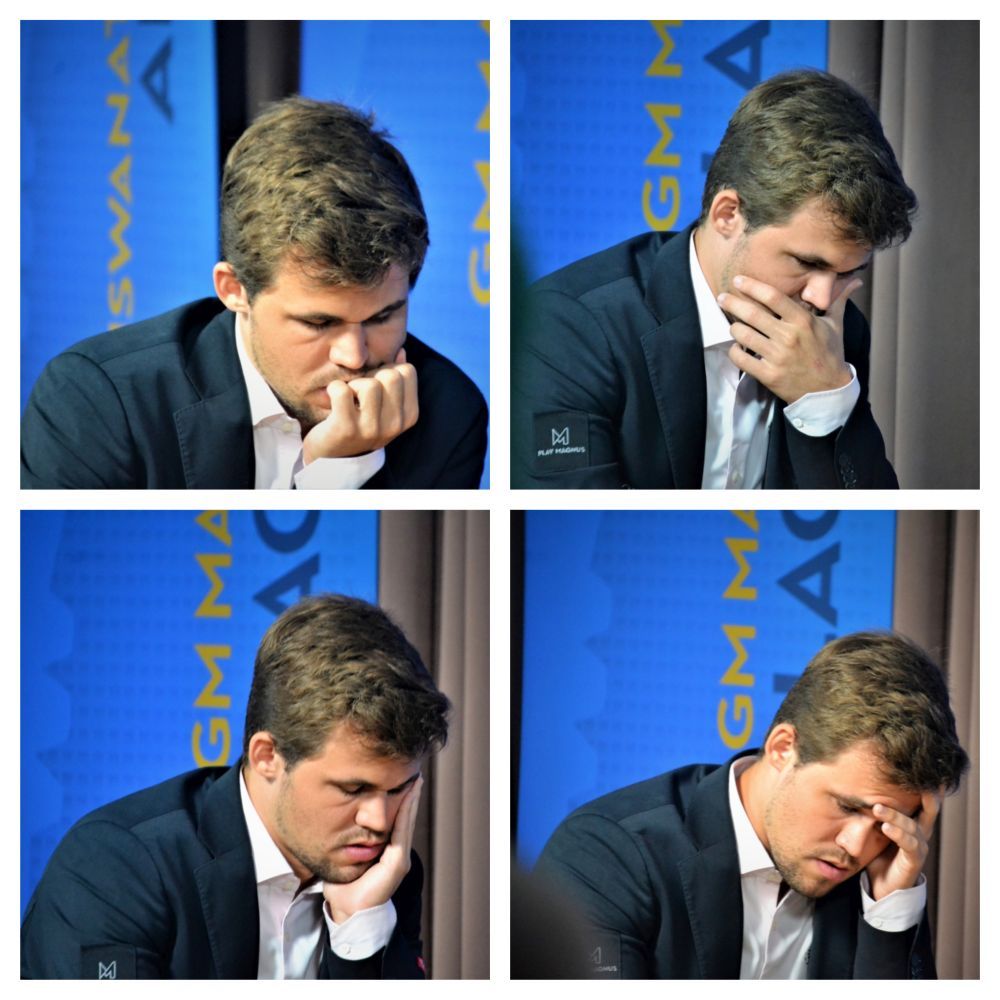 The Monster on the prowl, though stationary | Photo – V.Saravanan 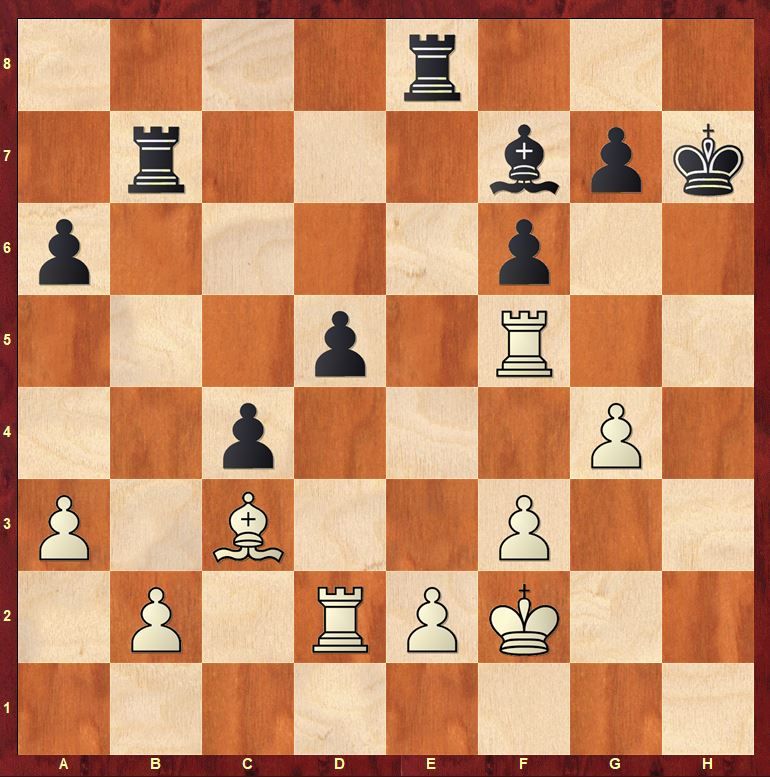 A result looked highly unlikely, as Magnus didn’t have much ammunition here, and black is after all the ‘Minister of Defence’.

At this point, I let out a large yawn here (without noise, I plead), and was silently admonished by Chris Bird in characteristic British dry humour. To my silent pleading, ‘But the players aren’t watching me!’ he gestured, ‘I am watching you!’

Chuckling, I returned back to the media room, to find the other Arbiter’s tweet up on the net: 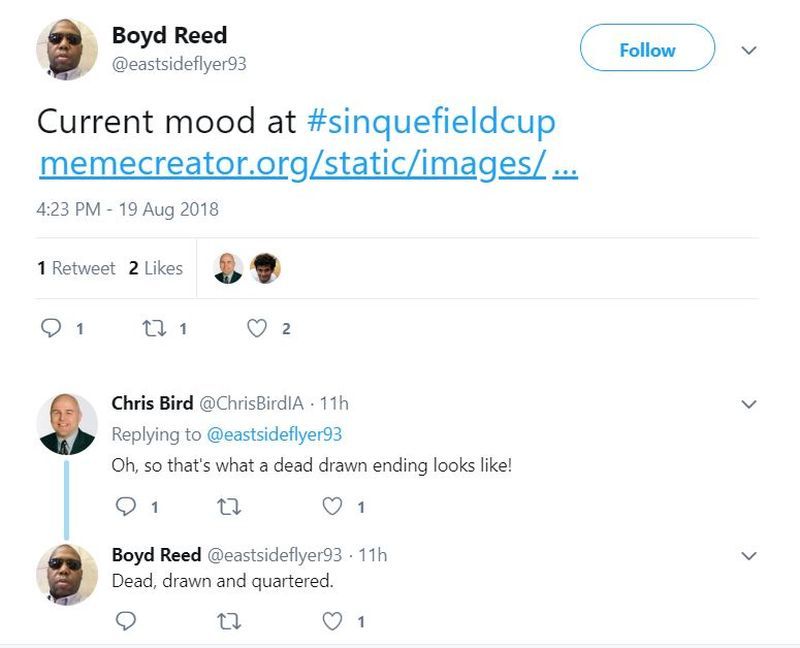 Check out the mood of Boyd Reed ! | Source: Twitter 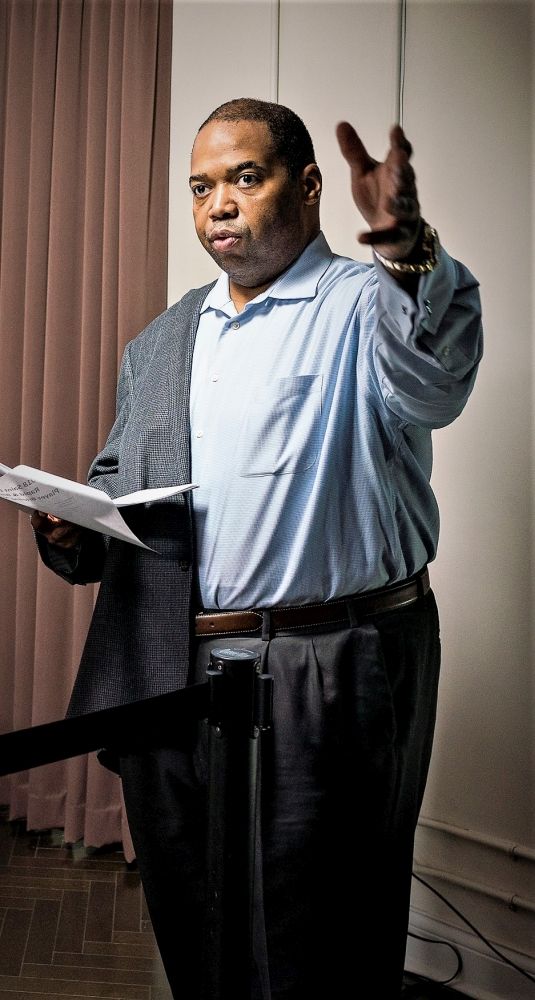 And as we sat watching the live commentary, out came the monster in Magnus Carlsen:

The whole world came alive. The most interesting point was, Carlsen later told, “I was hoping to sacrifice the exchange at some point”. You what?

It is pointless to analyse the rest of the game, so let us try to see how Carlsen brought up enormous pressure on the opponent: 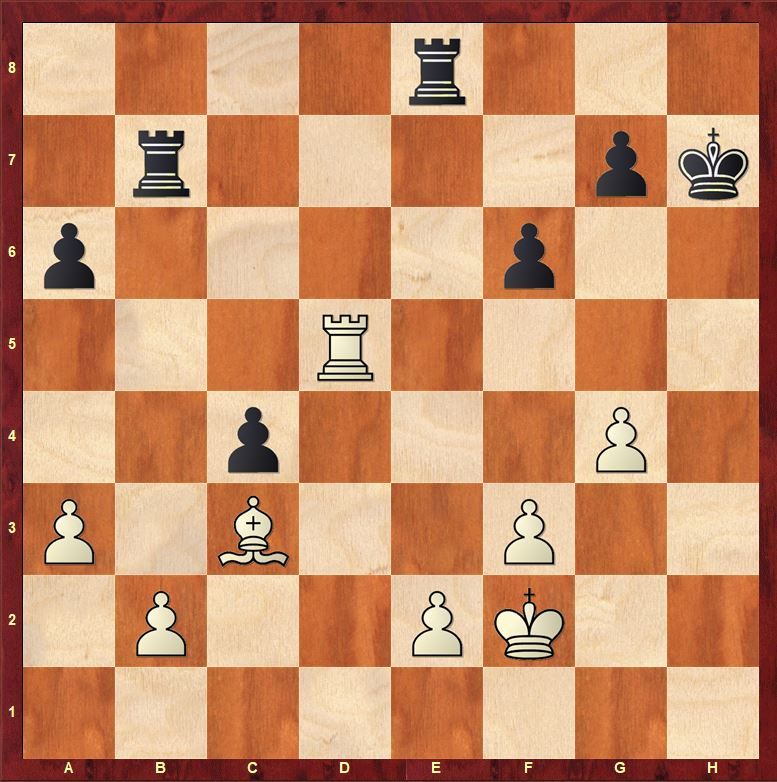 It is difficult to criticize Karjakin here, but it is not clear why he decided to give away the second pawn 38…Kg6 39.Rc5 Rh8 here, but he probably did not want to be pushed into passivity after 38…Rc7 39.e4 Re6 here? 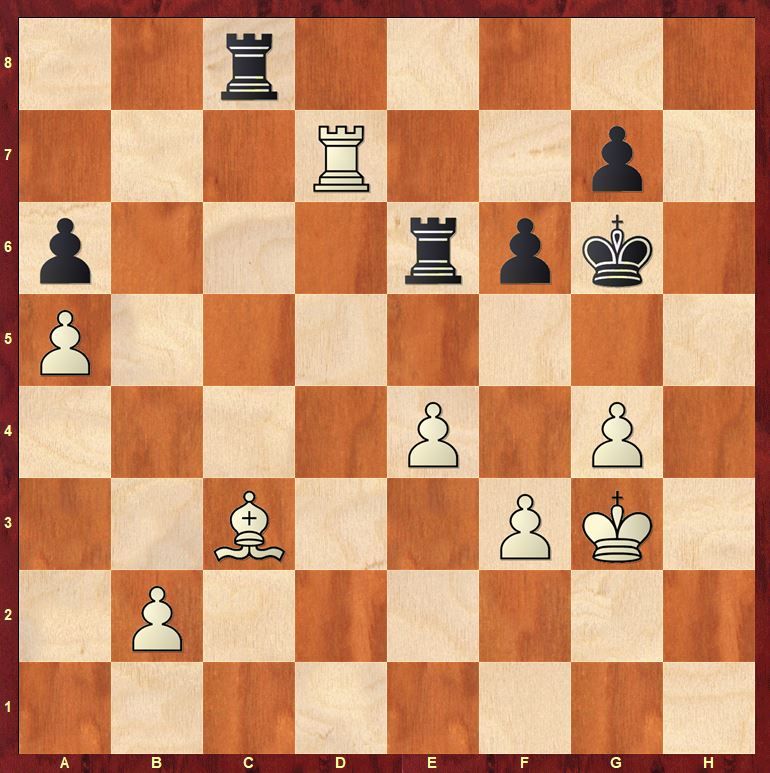 “It is awfully unpleasant (for black) here”, Carlsen. Already white is pushing here, having fixed the queenside and keeping his pieces in commanding positions. Mainly, black cannot give away the exchange back and try for a rook ending at any point in the resultant endings. 51.f4! and Carlsen’s grind started more powerfully. 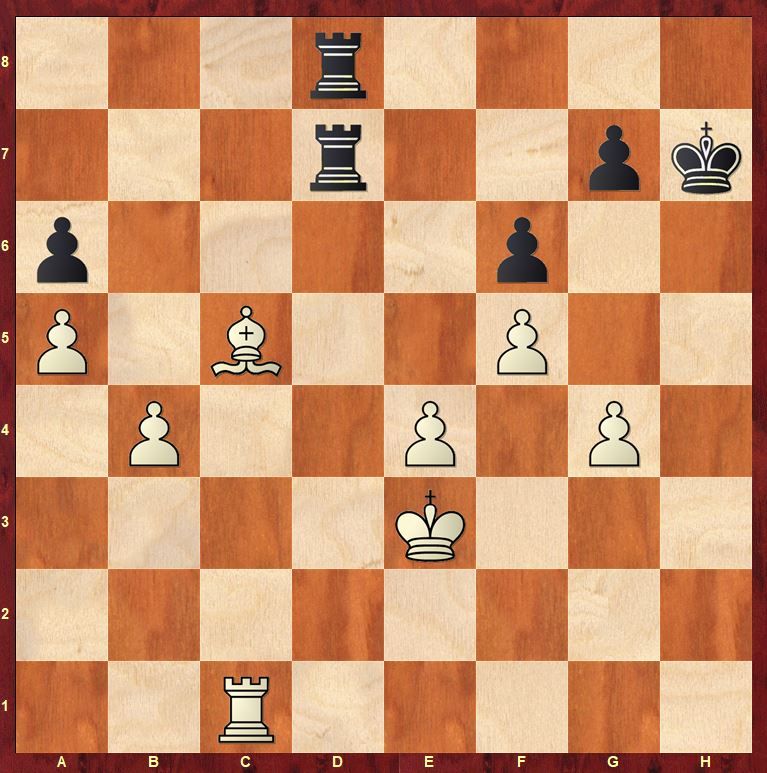 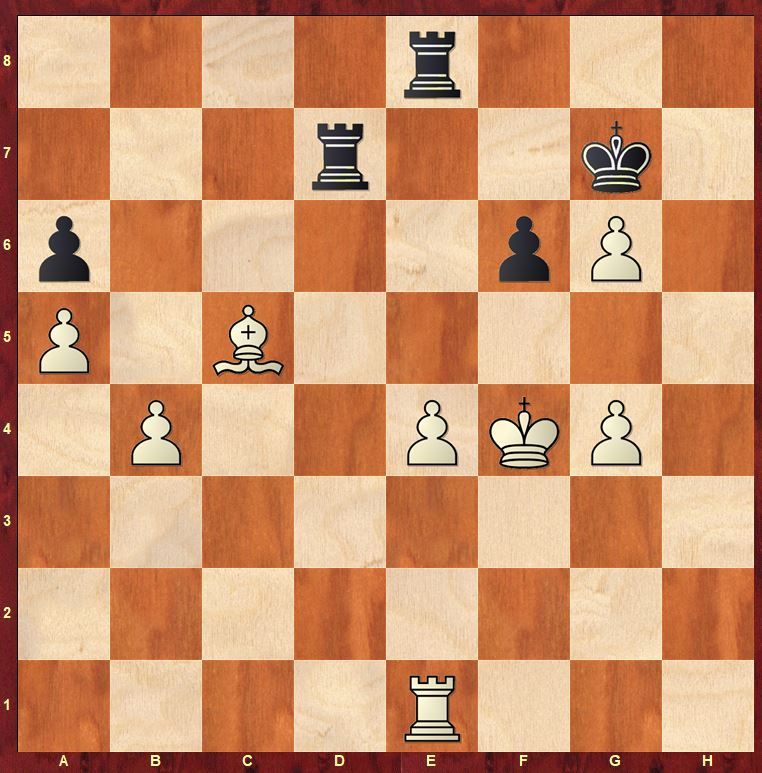 69.g5! Kxg6 70.gxf6 Kxf6 and though the position is objectively drawn, it is impossible to withstand the pressure at the 7th hour play.

“Once we both reached the time delay (point), I was kind of nervous, but felt that it should favour the attacking side”, opined Carlsen. And Karjakin’s blunder came at: 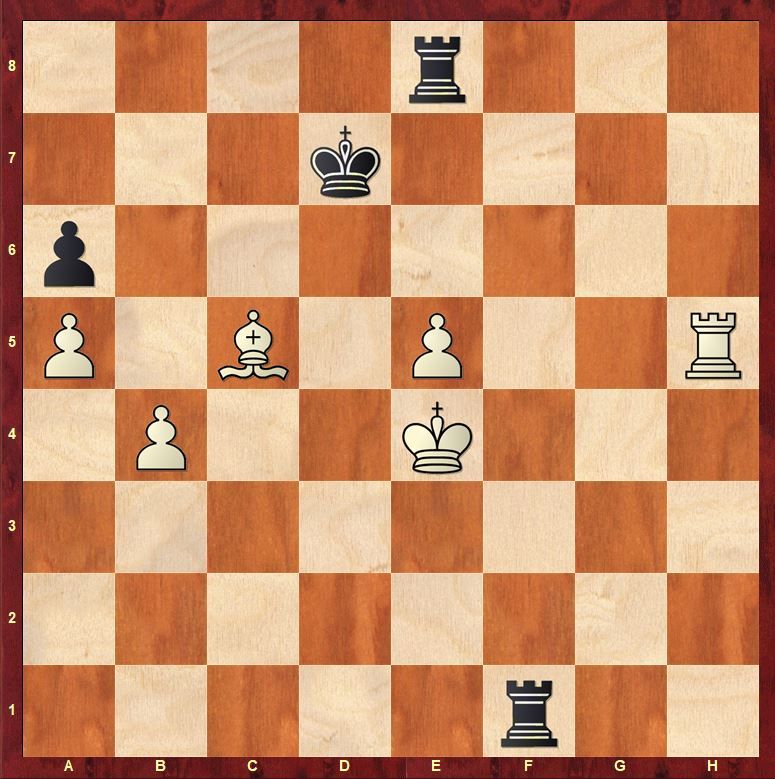 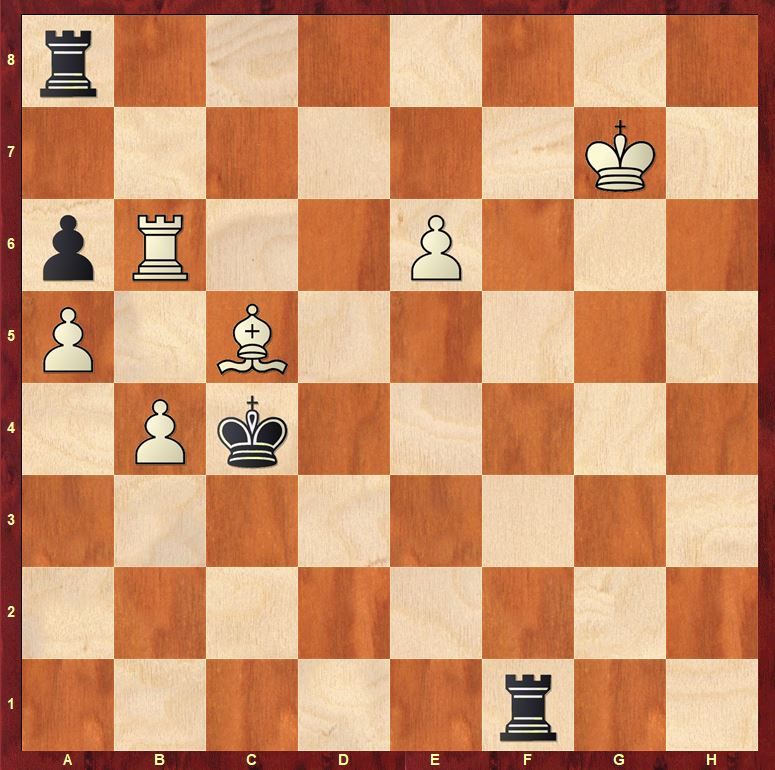 85.e7 and Carlsen achieved a winning position, after six and a half hours of play. 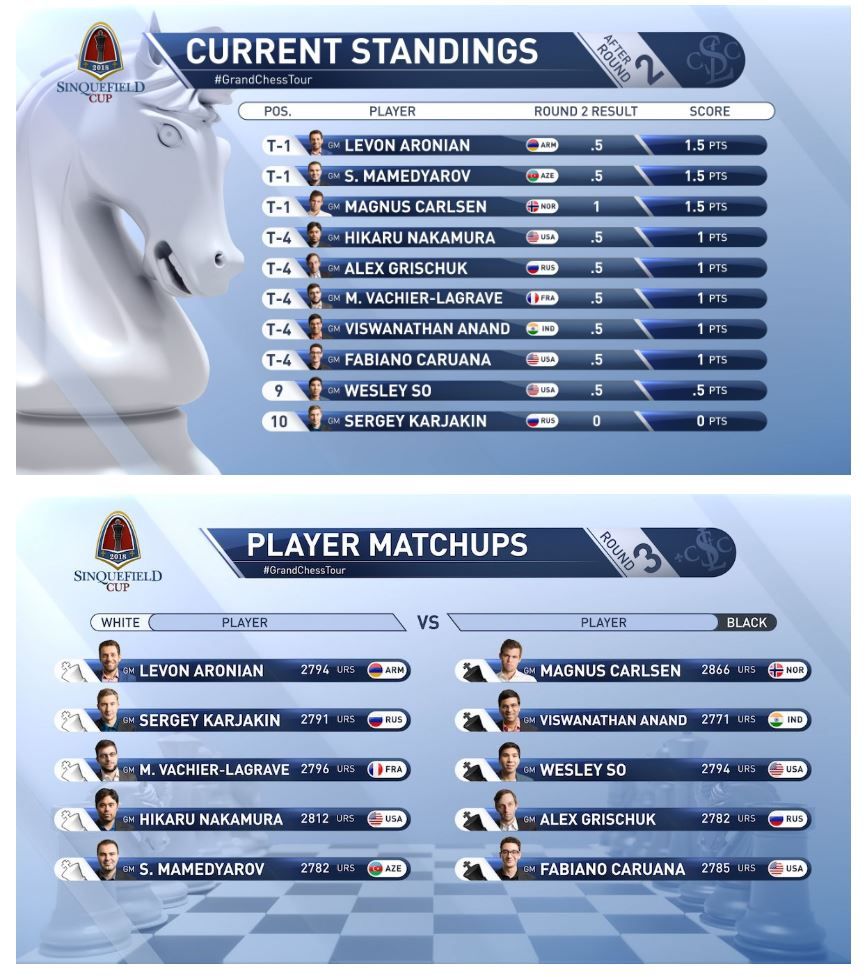