Sinquefield Cup 2017 Round 2: Magnus Carlsen shows he is the boss

The star studded field of the Sinquefield Cup 2017 is treating the crowd to some lively games. In round two Magnus Carlsen beat his World Championship opponent Sergey Karjakin. Wesley So showed a model game on how to punish unconventional opening play. Levon Aronian blundered a piece, handing the game to Caruana on a platter. The other games ended in a draw, but were not without excitement. Let IM V. Saravanan take you through the intricacies of all the battles.

The Sinquefield Cup continues to delight the spectators and chess fans, with its indomitable fighting games and typical drama. The second round too saw three games ending decisively and near-complete effort from all the players.

Start of another eventful round, with our favourite photographer Lennart Ootes in action

It was classic Carlsenomics in action at the second round at the Sinquefield Cup! And it was delightful to see the world champion come up with such a strong display of pressure chess against his immediate past challenger, Sergey Karjakin. The game had many ingredients of typical Carlsen ‘water-torture’: an innocuous developing of pieces in the opening, keeping all forces at his disposal ready to spring them into action, looking to expand his influence on the board at the same time making it difficult for the opponent to find any dynamism for his pieces… 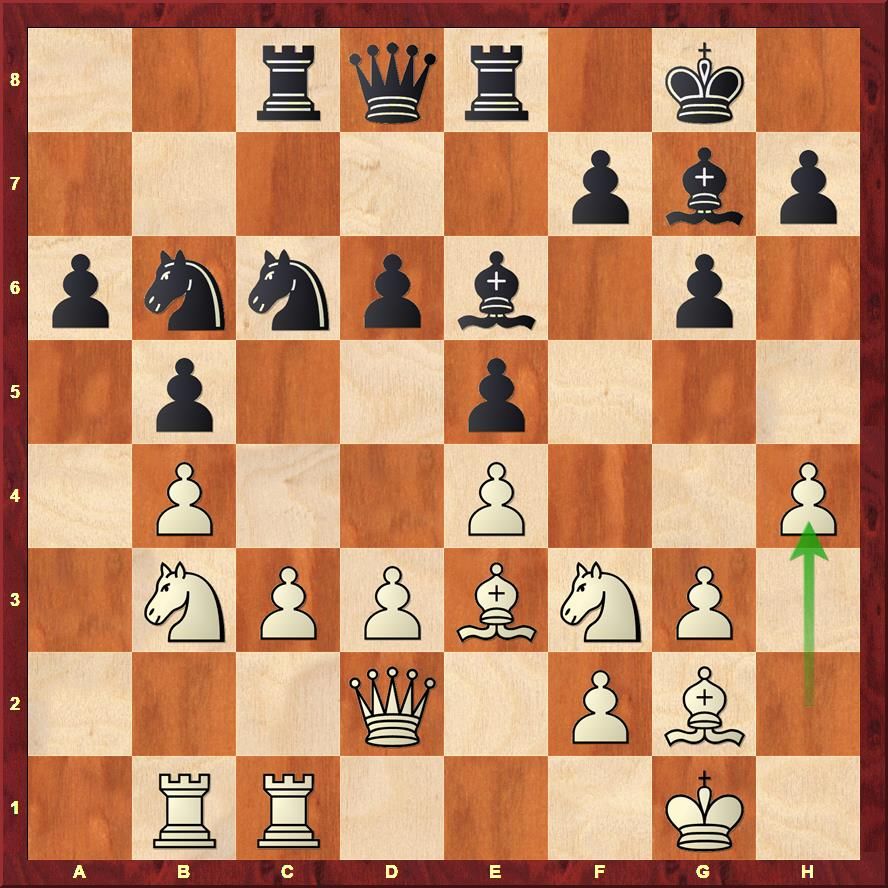 Carlsen - Karjakin, 17.h4!? More than trying to understand White's objective behind the move, it is useful to think how Black should respond here 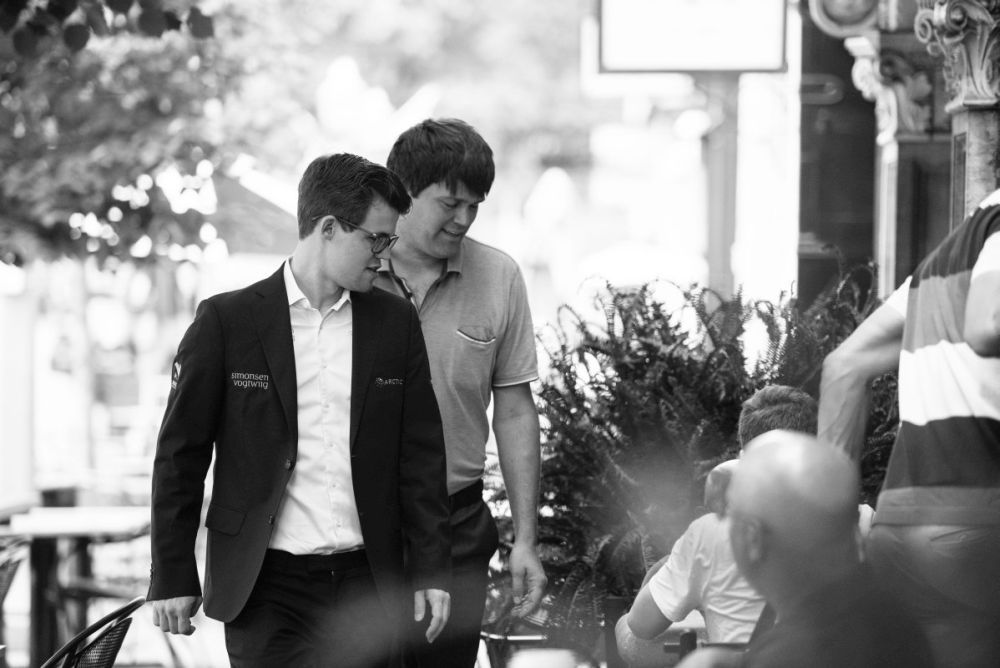 The man and his man friday: Carlsen arrives for the game with his second, Peter-Heine Nielsen | Photo: Austin Fuller

It was all the more impressive as Carlsen managed to bring this treatment to one of his main rivals against whom he fought the World Championship in Nov 2016. “I was just trying to find waiting moves, and find a correct moment to play cxb5 or d4 but really didn’t find anything. Then I started to gamble with this whole operation on the kingside”, said Carlsen about the middlegame phase. 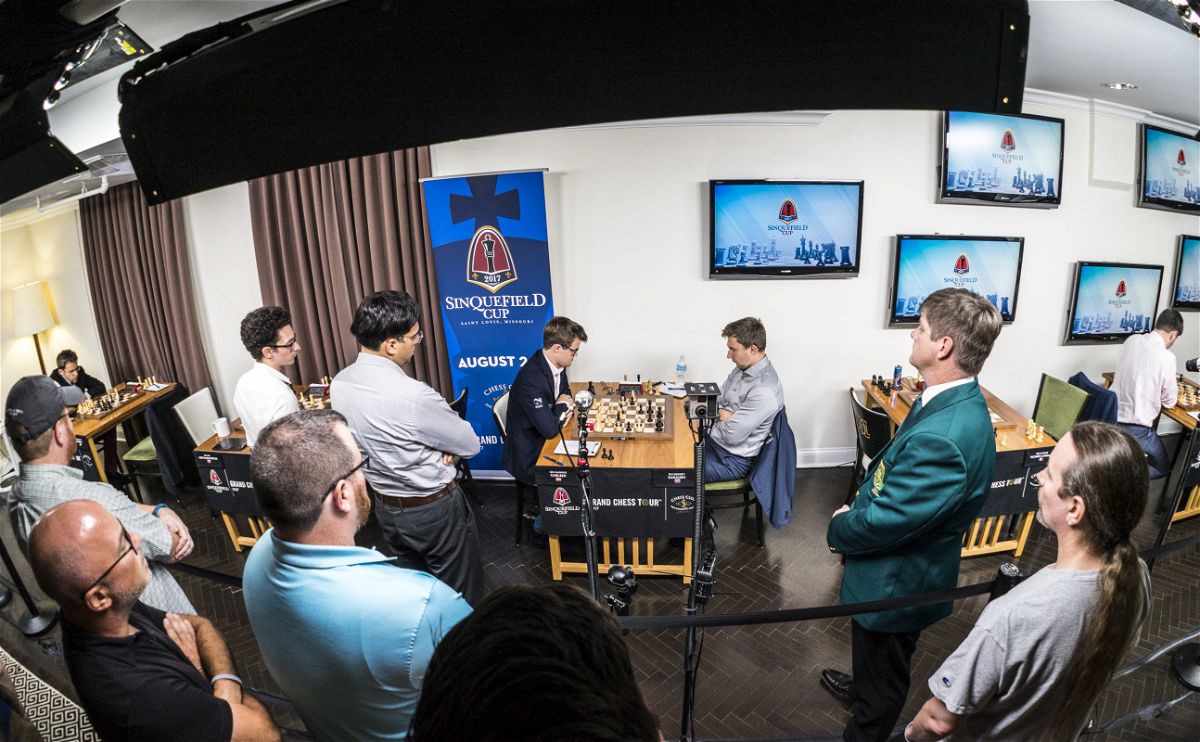 And typically, things reached a crescendo when Carlsen played 26.Rc6, bringing about a position where objectively Black was still doing fine. But he had strategic weaknesses which he had no choice but pushed to defend properly. “Oof! I don’t know what he intends to play against 31.Rc5 - it’s getting unpleasant. Without thinking very much about (the position), I would rather be White (here). But, Sergey is the best defender in the world!” quipped Vishy Anand, when asked for his opinion about the position. 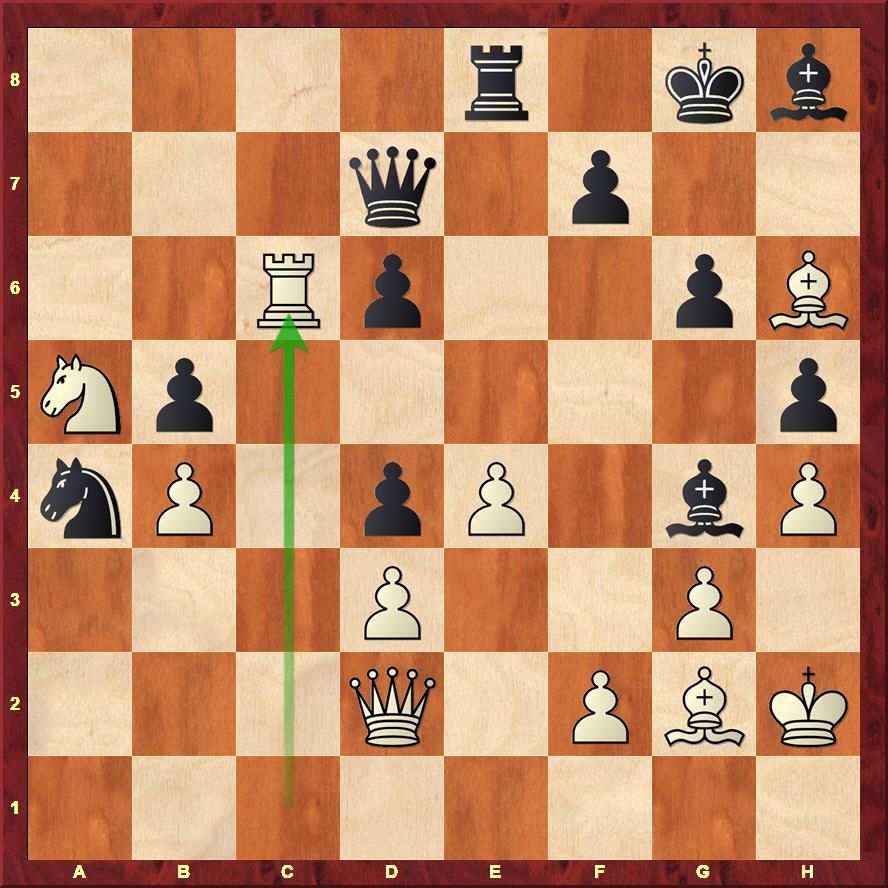 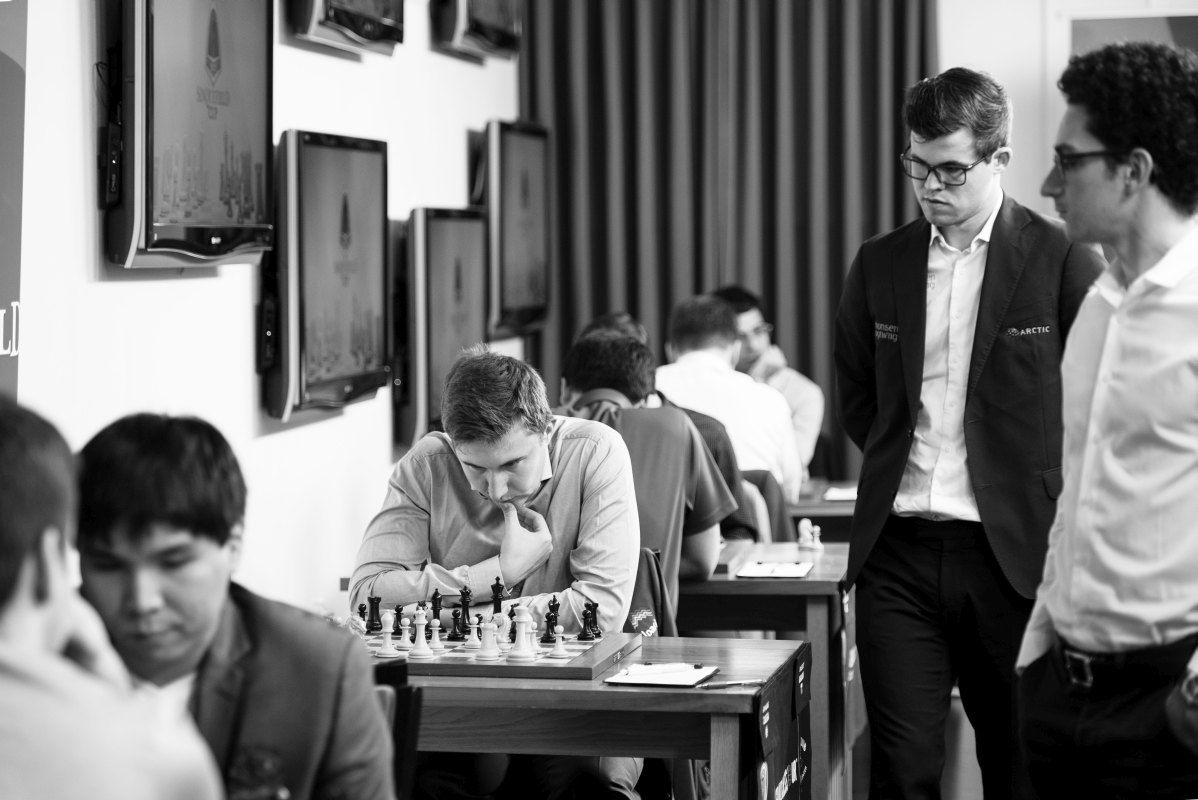 Straining under pressure, ‘the best defender in the world’  | Photo: Lennart Ootes

But even such established defensive skills couldn’t help Karjakin much on this occasion, as his position steadily went downhill under the pressure of the clock, resulting in a well-deserved victory for the world champion. “At some point I played badly - probably my biggest mistake was 31...Rc8, but I underestimated his play with f4-f5, but probably I was already lost”, opined Karjakin about his own play. 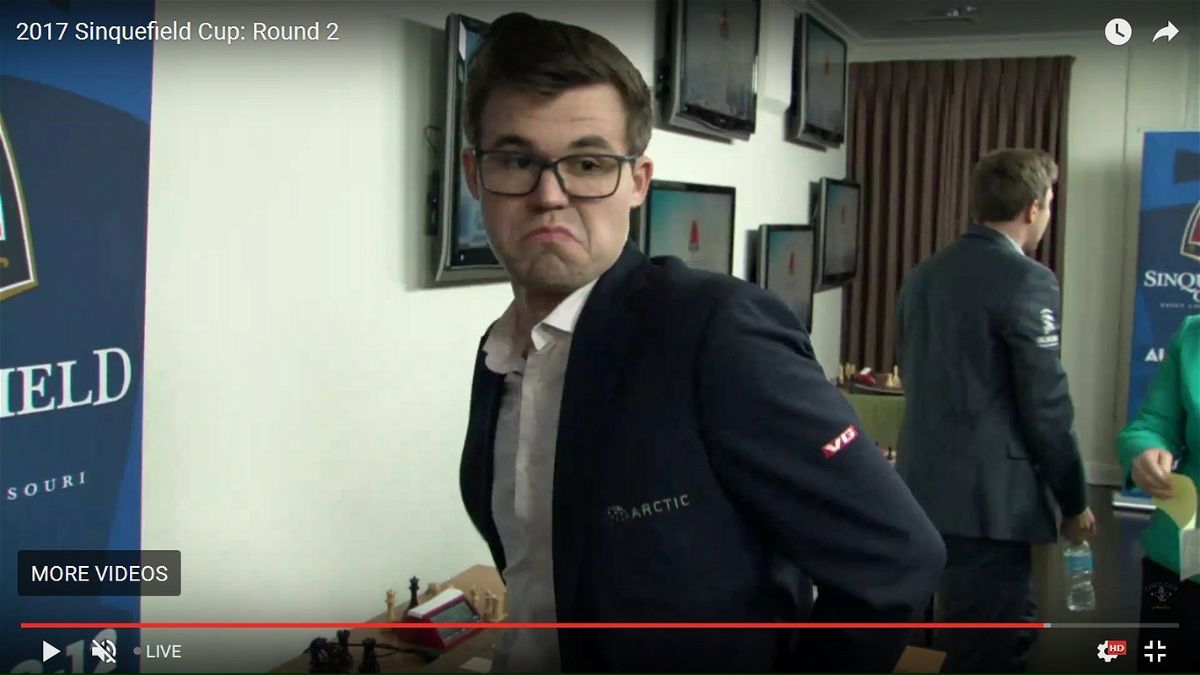 But the other end of the spectrum we had Ian Nepomniachtchi, who handled a chaotic Symmetrical English in an original and confident way, but paid the price of playing fast. 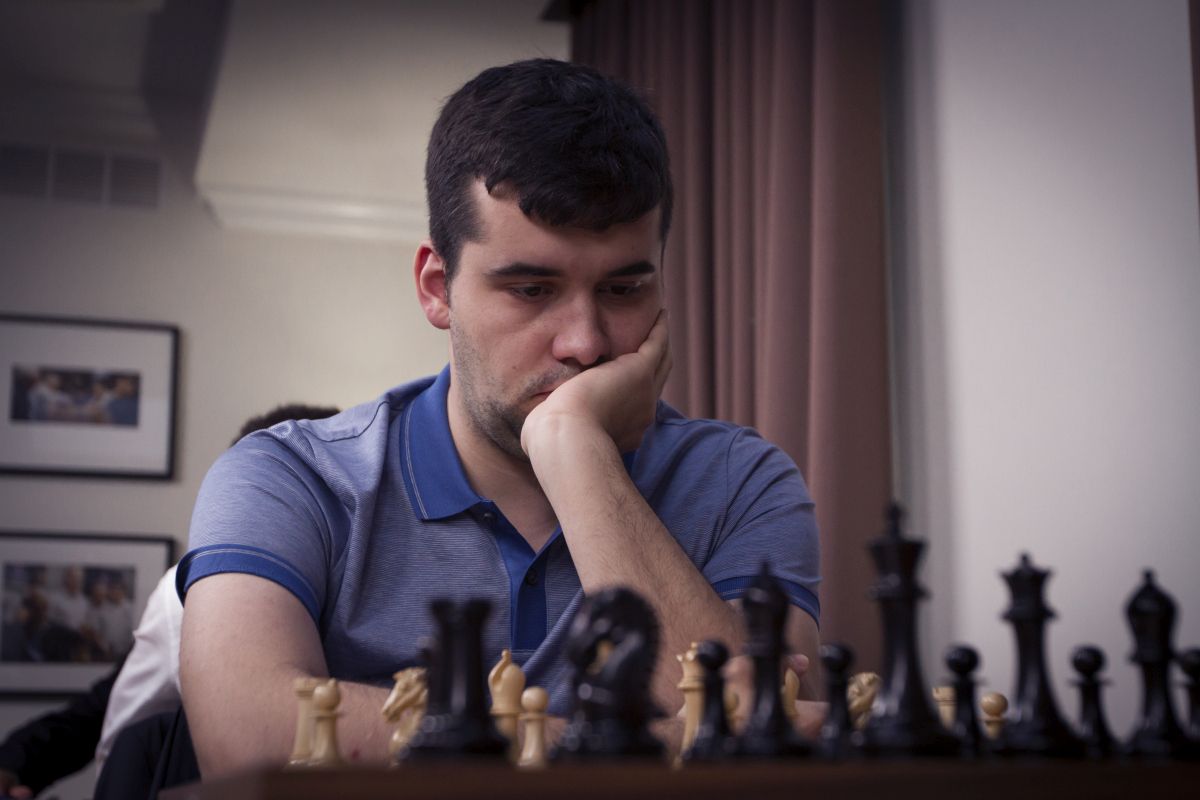 Ian Nepomniachtchi, “I am far off my even decent condition” | Photo: Grand Chess Tour

“The opening was more or less good for me. But I managed to blunder in one (move) with 17.f4, after which it was basically over. Maybe, I am not (concentrating) well, but far off my - not even best but even - decent condition”, Nepo after the game. Wesley So had no trouble in converting his advantage, and curiously raised his score against Nepo to an impressive 5 - 0! 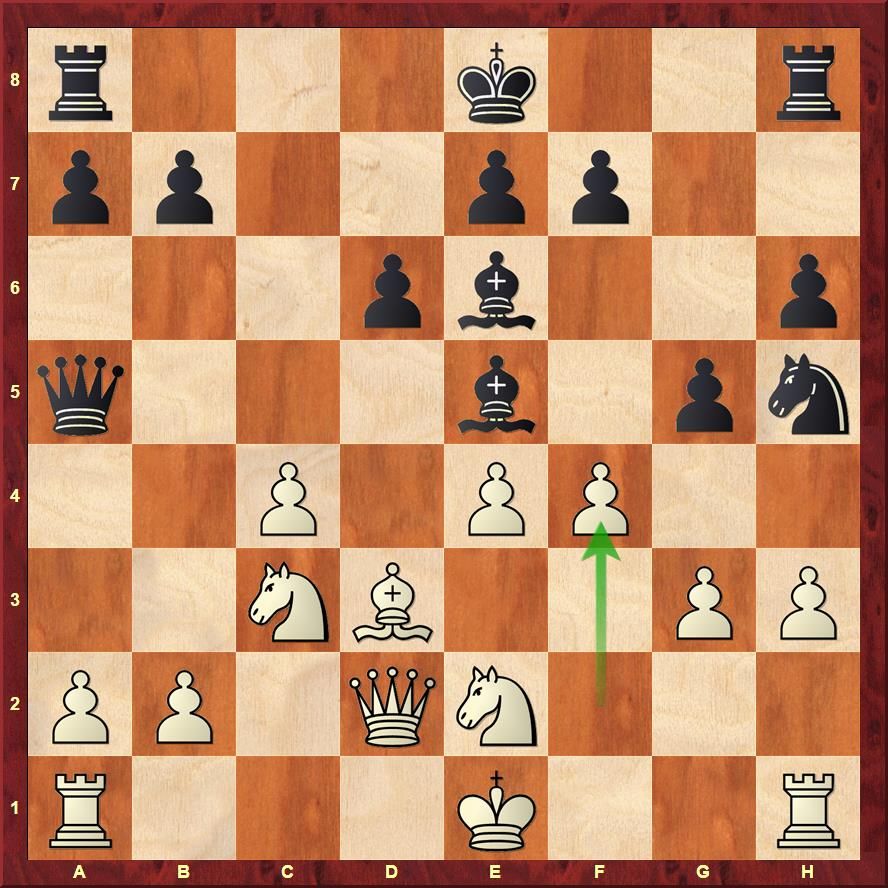 Nepomniachtchi - So. 17.f4? A blunder in One, played under Two minutes…

But totally inexplicable was the play by someone who delighted everyone with his free spirit, boldness and imagination in the first round. “Levon didn’t seem himself throughout the game”, opined Carlsen, and we couldn’t agree more. Starting with an insipid Be2, Aronian’s handling of the opening was puzzling, especially as the Queen’s Gambit Accepted is part of Caruana’s repertoire. Even then, Aronian’s play seemed a notch below par throughout the game and a horrendous blunder with 33.Ke2?? brought about a painful defeat. 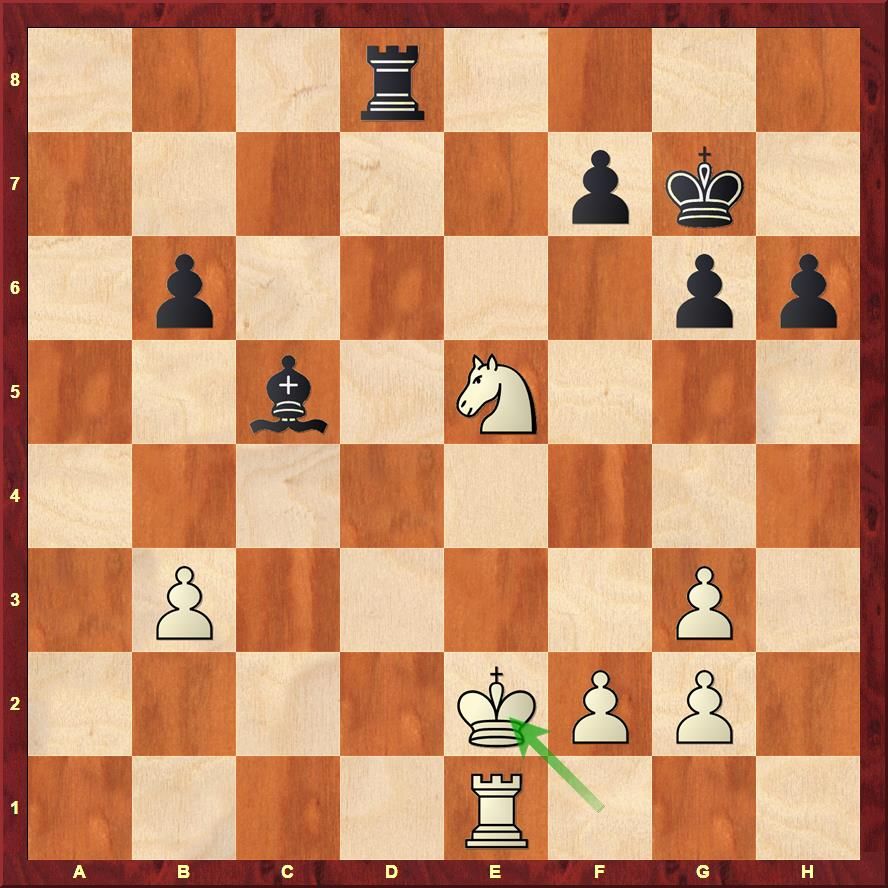 Aronian - Caruana. 33.Ke2?? Momentary loss of concentration. Can you see how the piece is lost? 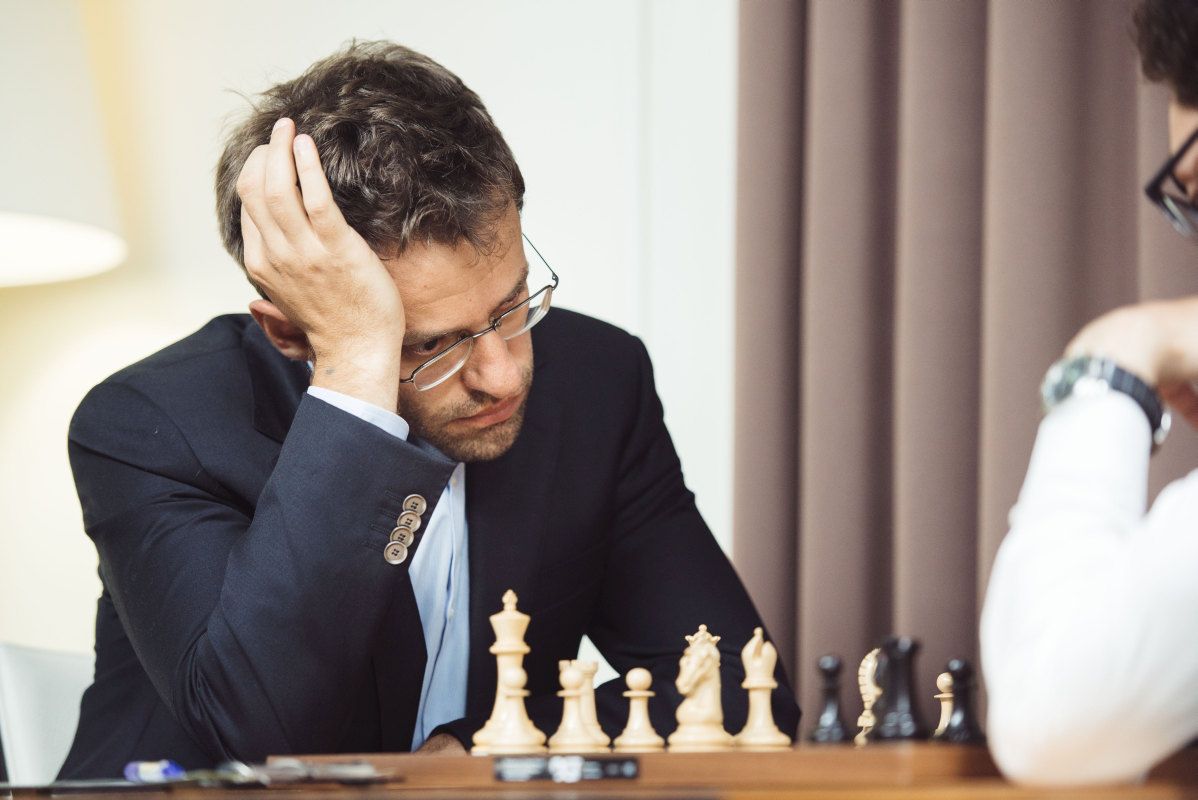 Nakamura - Vachier-Lagrave was a triumph for Black’s opening preparation, and careful play by both sides brought about a draw in 33 measured moves.

Vishy Anand did his favourite act of giving up his Bishop for the opponent’s Knight. He did it even better by doing it TWICE! However, he got rid of one of White’s Bishops too and sounded confident in defending the resultant position. 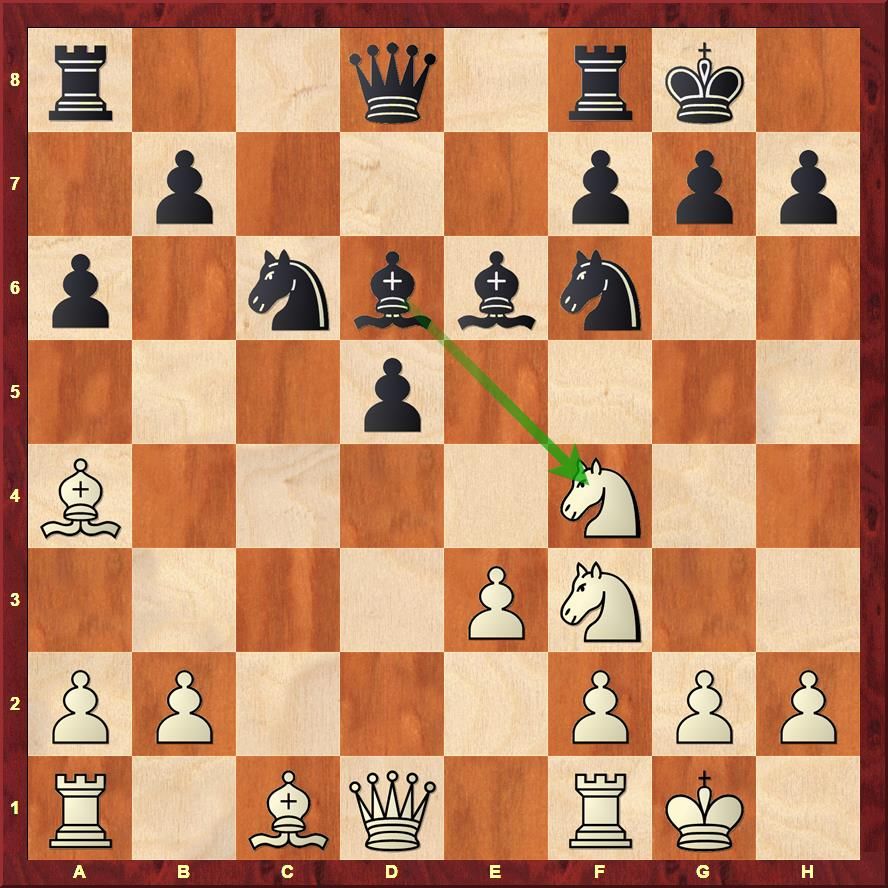 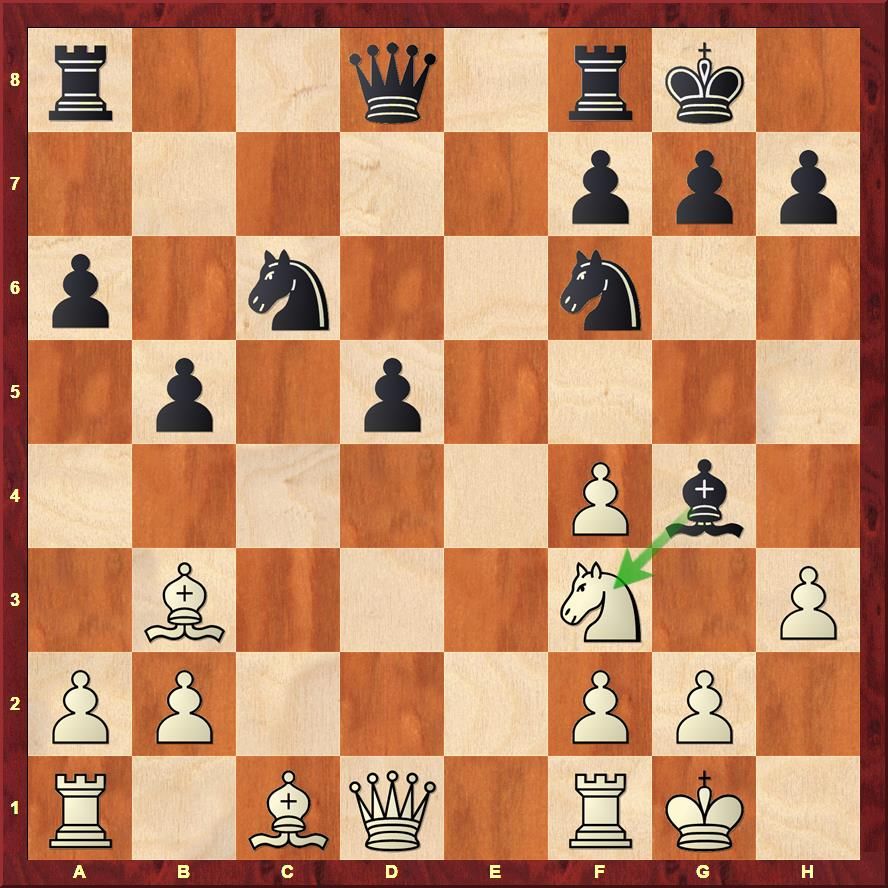 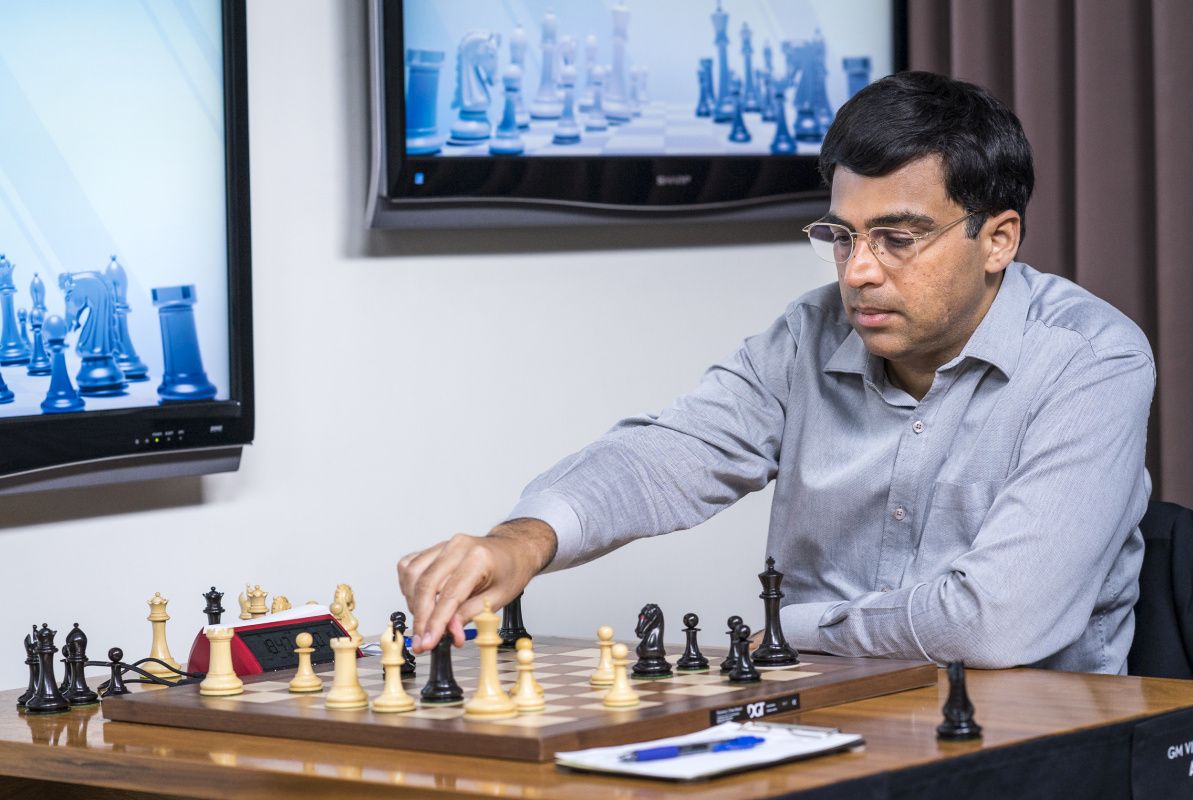 The following curious exchange took place in the post-game chat:

Maurice Ashley: I have seen you doing it often, in terms of bishop trade for knights. It doesn’t seem as though you prefer the knights to the bishops! (Anand starts chuckling) Is that true? 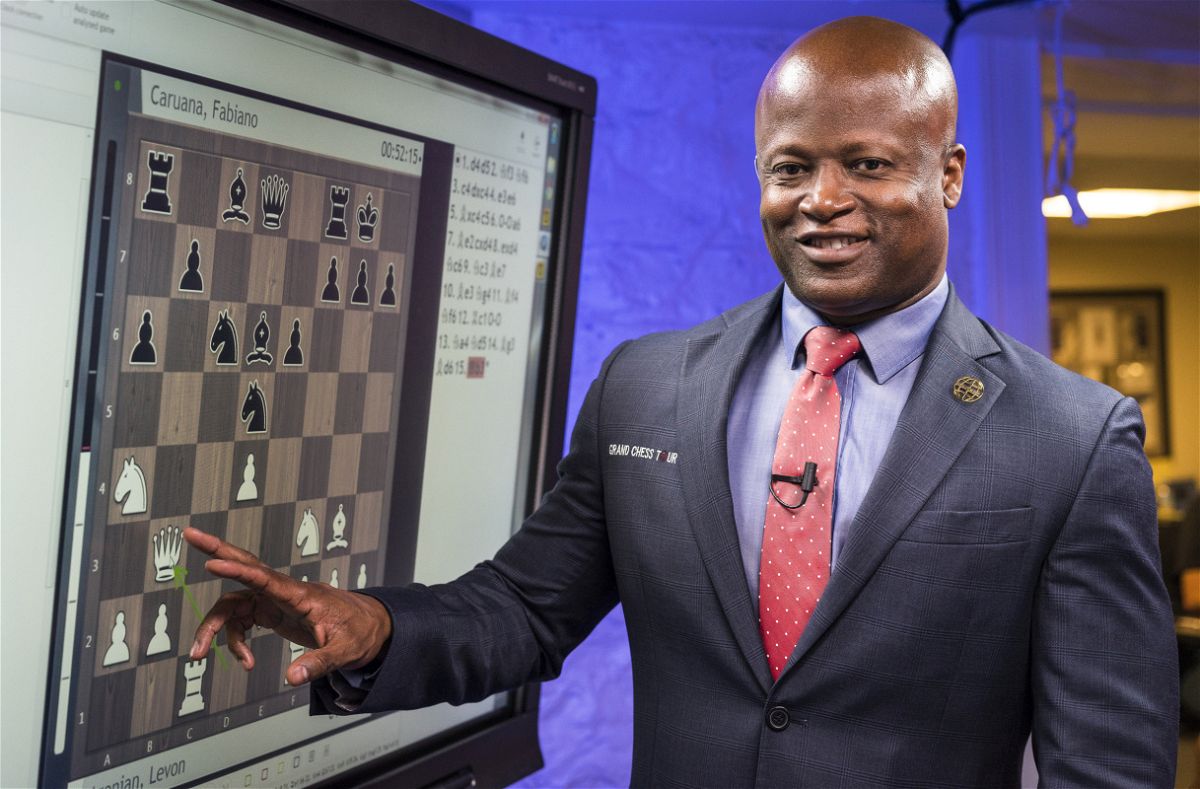 Crosstable after round two: