Padmini Rout comfortably clinched the title at the Asian Continental Chess Championship by splitting the point in her final round game against Wang Jue. At 7.0/9, Padmini was caught in the pole position by WGM Gong Qianyun of Singapore at the conclusion of the final round but a better tiebreak score gave the Indian the title. In the open segment, GM Surya Ganguly slipped down to the fourth spot after losing his final round game to Le Quang Liem. Nevertheless, he remained the only Indian in the open group to finish in the top 5 and book himself a berth in the 2019 FIDE World Cup.

The Asian Continental Championship came to close on Tuesday, December 18, 2018, in Makati city in the Philippines with Wei Yi and Padmini Rout clinching title prizes in the open and women's group respectively. Padmini had been the sole leader in the women's group ever since the fifth round and hardly had any problems making it to the title prize. In her last three games, she scored three comfortable draws to cruize to the first place in the final standings. 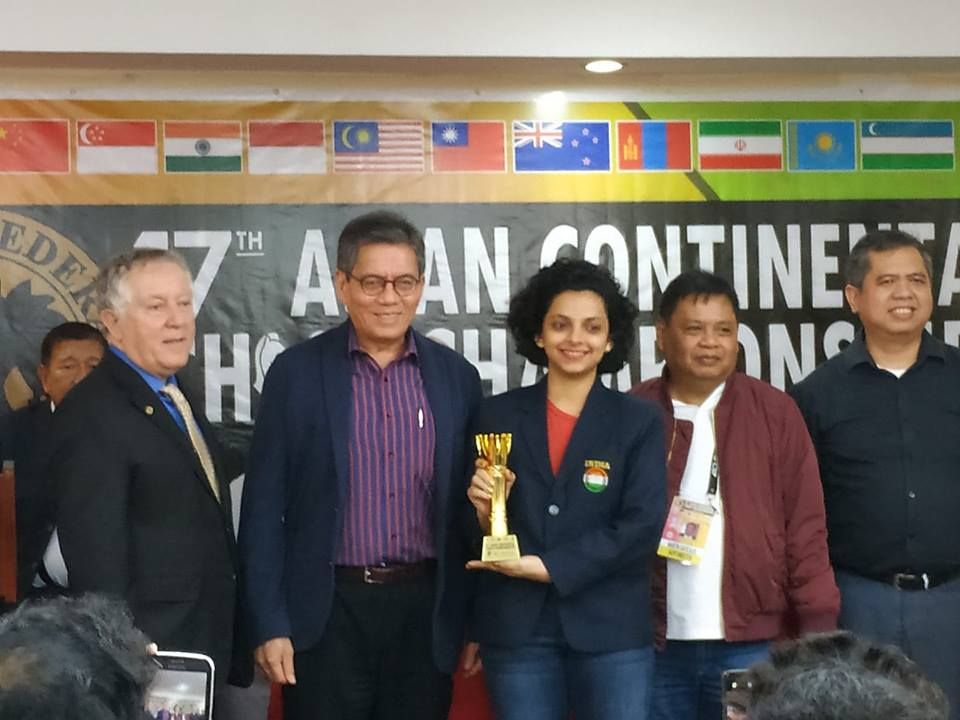 In the final round, Padmini drew with the black pieces against Chinese WGM Wang Jue. Padmini had the black pieces in the game. Going for quick exchanges in an Italian Opening she signed peace 26 moves into the game.

Meanwhile, Gong Qianyun tried hard to topple Padmini off the pole position but, in the end, only managed to catch up with the leader. And since Padmini had defeated Gong in the sixth round, she had nothing worry about. Gong’s final round game against Munkhzul Turmunkh was especially spectacular. 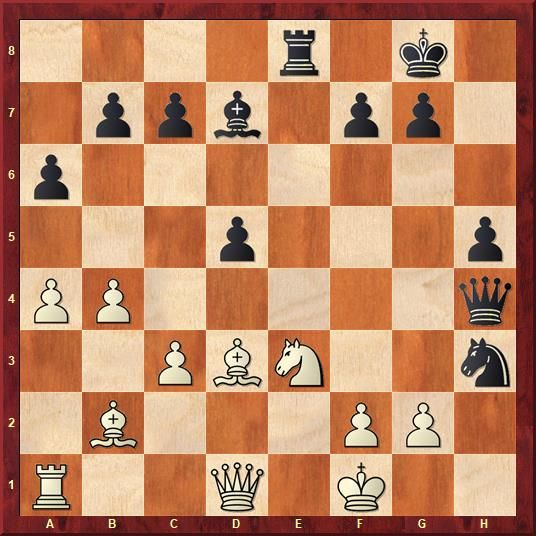 At the outset, Black seems to have a strong attack but there is no knock-out blow. In fact, the computer evaluates the position to be slightly better for white after 23.Qd2. However, white grabbed the h3 knight in the game but this proved to be disastrous. White lost her queen after 23…Rxe3! 24.fxe3 Bxh3+ 25.Ke2 Bg4+. Although white still had a rook and two bishops in the resulting position, Black’s kingside pawns were much too fast.

In the open group, GM Surya Shekhar Ganguly did not manage to keep up his dominion and slipped down to the fifth place on the leaderboard after the ninth round. In his last two games, Ganguly only managed to scrape out a draw and finished fourth with a score of 6.0/9. But despite a slightly disappointing finish, Ganguly remained the only Indian to finish among the top five and book a berth into the 2019 World Cup in Khanty Mansiysk, Russia.

In the penultimate round, Ganguly discussed the Italian Opening with the white pieces against his then co-leader, GM Amin Tabatabaei. In the middle game, Tabatabaei induced complications giving up two knights for a rook and two pawns. 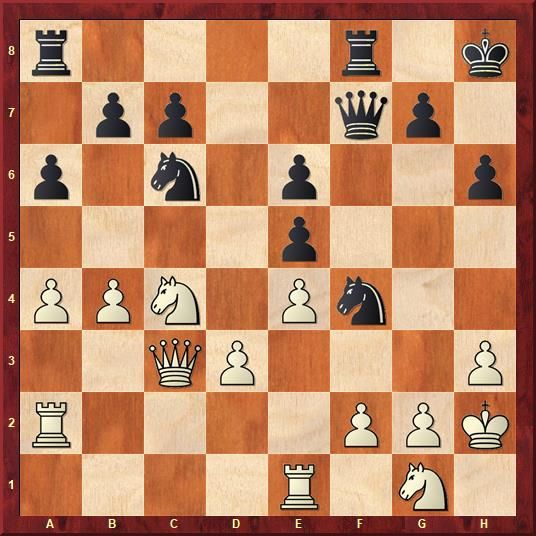 Play continued 21…Nxd3 22.Qxd3 Nxb4. The computers preferred white’s position at several points after this but Tabatabaei stuck to his plan of advancing his queenside pawns to seek counterplay. Ganguly could not find the best moves to press in the position but he did manage to win one of black’s two queenside passers and blockade the second to hold the game to a draw after 57 moves.

While the leaders drew on the top board, Wei Yi sought the opportunity to join them in the tournament lead by defeating Nodirbek Abdusattorov in the penultimate round. In an English Opening, he pulled out a win in merely 19 moves with the white pieces after the Uzbek youngster faltered in the opening phase.

In the final round, Ganguly was facing Le Quang Liem, who was half a point behind him on the score tally. Le, as white, went for the English Opening, which soon drifted into the lines of the reversed Sicilian Dragon. The game remained equal for the most part but like in the previous round, Ganguly began making inaccuracies in the endgame and found himself under pressure. 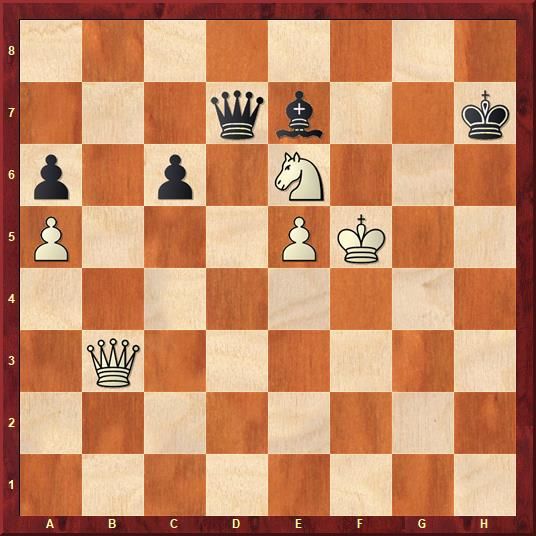 Black was already under a bit of pressure here when Ganguly's 62…Bf8? brought the game to an instant end. There followed 63.Qh3+ Bh6 64.Kf6 Qd2 65.Qf5+ Kh8 and 66.Kg6 when black could not have avoided the loss of the h6 bishop or an eventual checkmate. 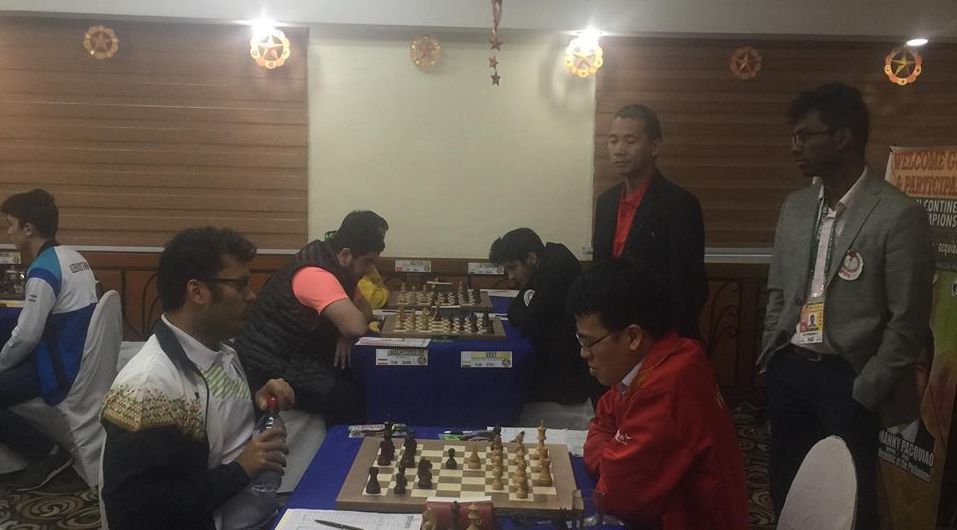 Update on the Vidit Gujrathi incident

In our first report on the event, we had mentioned GM Vidit Gujrathi’s complaints regarding the accommodation and the attacks that Vidit and his colleagues, Abhijit Kunte and MR Lalith Babu, fell prey to on the eve of the event. ChessBase India had also tried to get in touch with some of the officials from the National Chess Federation of the Philippines and the Tournament Director of the event but none of the emails was answered.

However, in a recent update on the incident, one of the founding members of the National Chess Federation of the Philippines, Bobby Ang, addressed these issues in a report in BusinessWorld. According to Ang, the police had reviewed closed-circuit TV recordings of the incident and concluded “the three players went out and passed by a group of children (not armed goons) and two of the kids (who were half the size of the players) asked them if they could spare some change. The players ignored the beggars and went back to the hotel. Nobody was “cornered and attacked by armed goons.”

About the complaints regarding the accommodation, Ang wrote, “they were comparing the rate of a stripped-down room rate with no amenities at all with that of a single room with breakfast, lunch and dinner and function room. Most players took the option of a double room which is $85 per person. No chess organizer here in the Philippines would stoop to milking visitors from foreign shores by marking up hotel rates. Maybe this is done in other countries, but not in the Philippines.”

Three days before this piece was published, Vidit had posted about the incident on Facebook stating that the perpetrators were young delinquents.

Talking to ChessBase India, Vidit said, “It is a lie that they were just begging. The officials agreed that these people were delinquents. And I have zero problems if the CCTV footage is made public.”

When asked about the accommodation, he added: “The room was absolutely horrible. You can ask any player. There were rats in the room!”

Finally, Cliburn Anthony A. Orbe, the treasurer of the National Chess Association of the Philippines, took to Facebook to clarify the entire incident. In a live video stream, he read excerpts from a copy on the police report of the incident, which affirmed that the youngsters were only begging. He also admitted that these beggars were juvenile delinquents but did not possess weapons. However, they were begging aggressively and were bothering the trio. He further added that he understood Vidit, Lalith Babu and Kunte's side. "They (the Indians) were not familiar with the place. They may have sincerely thought that those minors had weapons."

"There are no armed goons in Makati, especially in the Central Business District" - Cliburn Anthony A. Orbe
Related news: