Leaders changed once again in the ninth round of the Women's National Championship. At the conclusion of the antepenultimate round, Air India's Bhakti Kulkarni was toppled off her top spot by Mary Ann Gomes of PSPB in the premier matchup of the round. Mahalakshmi M was another player to join into the tournament lead as she defeated Michelle Catherina. After her loss, Bhakti has slipped down to the third spot behind Gomes and Mahalakshmi while Michelle shares the fourth place with six others. Round 9 report.

Change is the only permanent they say. At the close of another round, another leader was toppled at the Women's National Championship in Jaipur, Rajasthan. On the premier board in the ninth round, Mary Ann Gomes (2286) of PSPB took down the overnight leader Bhakti Kulkarni to take over the tournament lead. Mahalakshmi M (2198), who was also a half point behind Kulkarni going into the round, seized the moment to join Gomes on the top spot as she beat WIM Michelle Catherina P (2182) of Tamil Nadu. Both Gomes and Mahalakshmi have scored 7.5 points out of their nine games.

In the top game of the round, Mary was on the front foot against Bhakti Kulkarni in a Reti Opening. However, Kulkarni wasn't really worse. She had managed to keep balanced well until the 28th move. 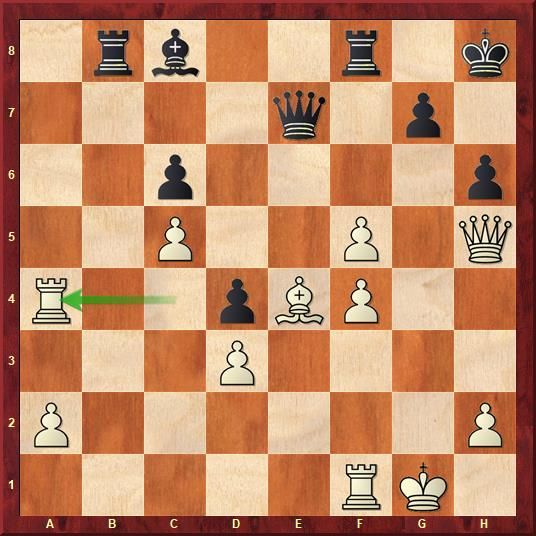 White had just captured a pawn on a4 here. Computers thought black was best advised to cover c6 with 28...Rf6 and then she was free to take on c5 at will. Bhakti, however, chose to capture immediately. And after 28...Qxc5 29.Rc4 Qa5 30.Rxc6, a catastrophe occurred -- Bhakti took on f5 with the bishop. 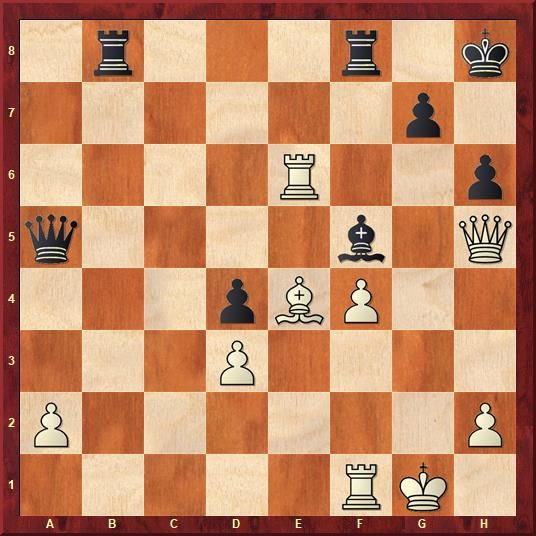 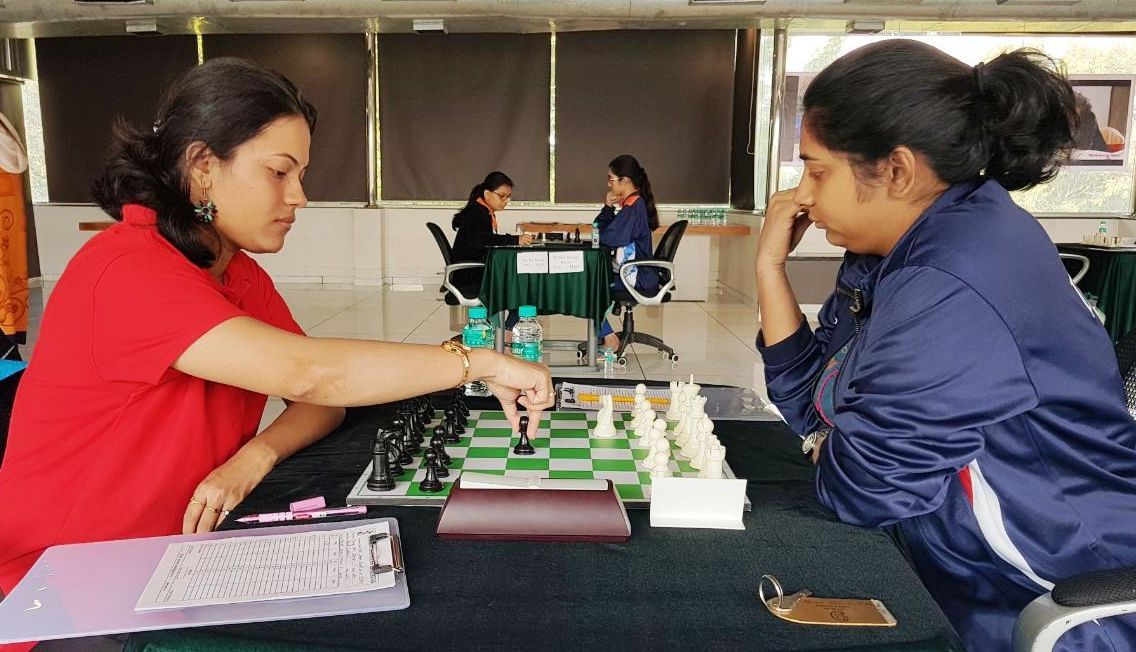 Mary Ann Gomes (right) and Bhakti Kulkarni during the fourth round of the 2017 Women's National Premier. Even back then, they had discussed the Reti where Mary had the whites. However, Bhakti was the victor in that encounter. | Photo: Ankit Dalal

On board  2, Mahalakshmi M got the better of Michelle Catherina, who shared the second place with the former, going into round 9. This was another Reti Opening where white had a decent pull on the position in the middle game. But the deciding moment came on the 27th move when Michelle let a lot of material slip away with her 27...Bd6. 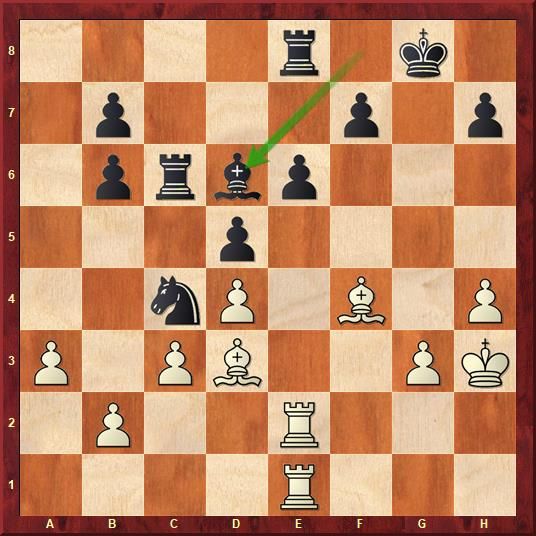 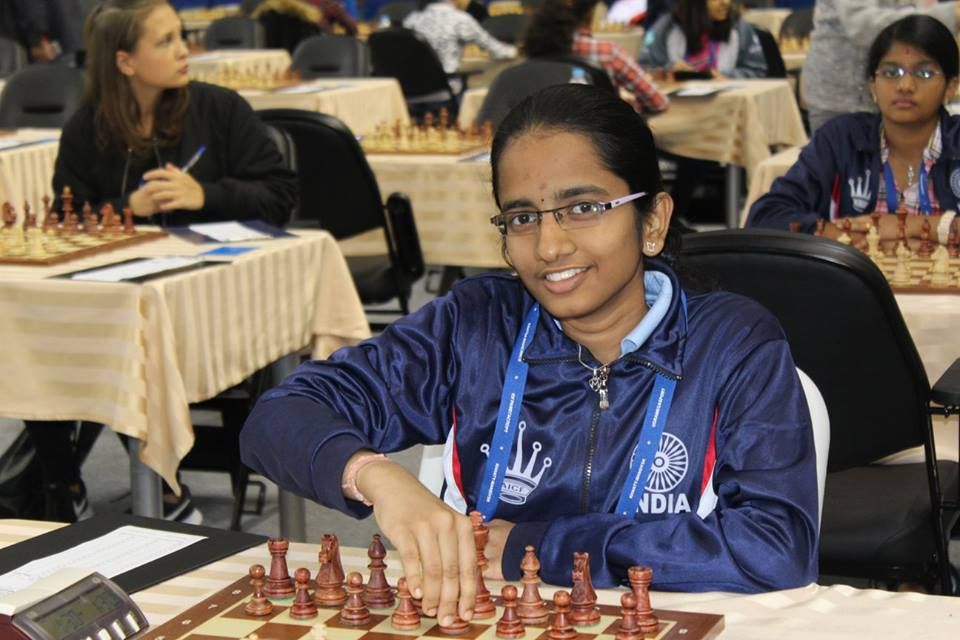 Bommini Mounika Akshaya (1859) had had a phenomenal run in the tournament until the 8th round. She had played six players rated more than 200 points above her and had managed to remain unbeaten. In round 9, however, her unbeaten run was brought to a halt by Nandhidaa PV (2240) who convincingly defeated the Gunthur girl from the black side of a London System. 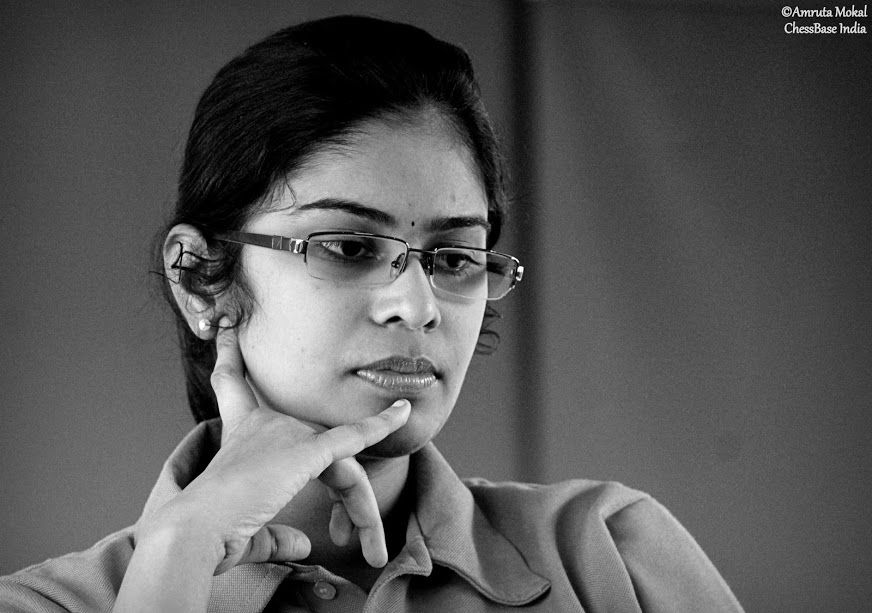 With the lead changing hands every now and then, the tournament has been quite exciting thus far. As it stands, the tournament is wide open and it's hard to predict any favourites. It will be interesting to see how the final two rounds unfold.