Isle of Man Masters: Naiditsch and Wojtaszek emerge as leaders

The eighth round of the Isle of Man Masters saw the pack of leaders trim down from seven to just two. Beating Hikaru Nakamura and Mickey Adams respectively, Arkadij Naiditsch and Radoslaw Wojtaszek sped past the field and have taken a half point lead going into the final round. Meanwhile, Vishy Anand drew against Vladislav Artemiev. This draw meant that Anand is out of contention for the title. All other Indians are also at a score of either 5.5 or lower and will not have any chance at the title. Nevertheless, Vidit Gujrathi treated his fans and all those watching with a brilliant attacking game against Svane Rasmus. Round 8 report.

From seven to two

After the antepenultimate round, as many as seven players had joined the ever-growing pack of leaders at the Chess.com Isle of Man Masters. After round eight, however, things changed drastically. While Maxime Vachier-Lagrave and Wang Hao agreed to a tepid draw in the premier matchup of the round, Arkadij Naiditsch and Radoslaw Wojtaszek won on boards two and three to take sole lead in the tournament.

For Wojtaszek, the win came rather easily over the board thanks to his extensive home preparation. Adams was caught off guard in a sharp line of the Open Catalan after Wojtaszek uncorked the novelty 15.Qb3. Adams reacted in the worst manner possible, placing his knight on the side of the board. 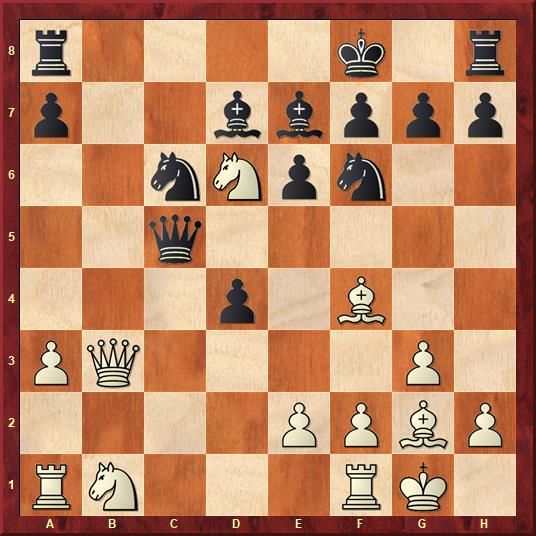 This was immediately punished by Wojtaszek. With his bishop raging down the long diagonal, Wojtaszek exploited the bad placement of the knight by trapping it in its sidelined post and won an exchange. The multitude of tactical possibilities required Wojtaszek to expend some time in calculating but once he had found his way out of the woods, forcing the win did not prove to be too difficult. Adams limped on until the 45th move but the result of the game was never in doubt.

Wojtaszek said after the game that he was surprised by his opponent’s reaction to the novelty. Talking about the crunch moment when Adams had placed his knight on the side of the board, he said, “After 16.Qb4, it was just over. Of course, I was surprised that it happened but if there are so many options, you can go wrong.” 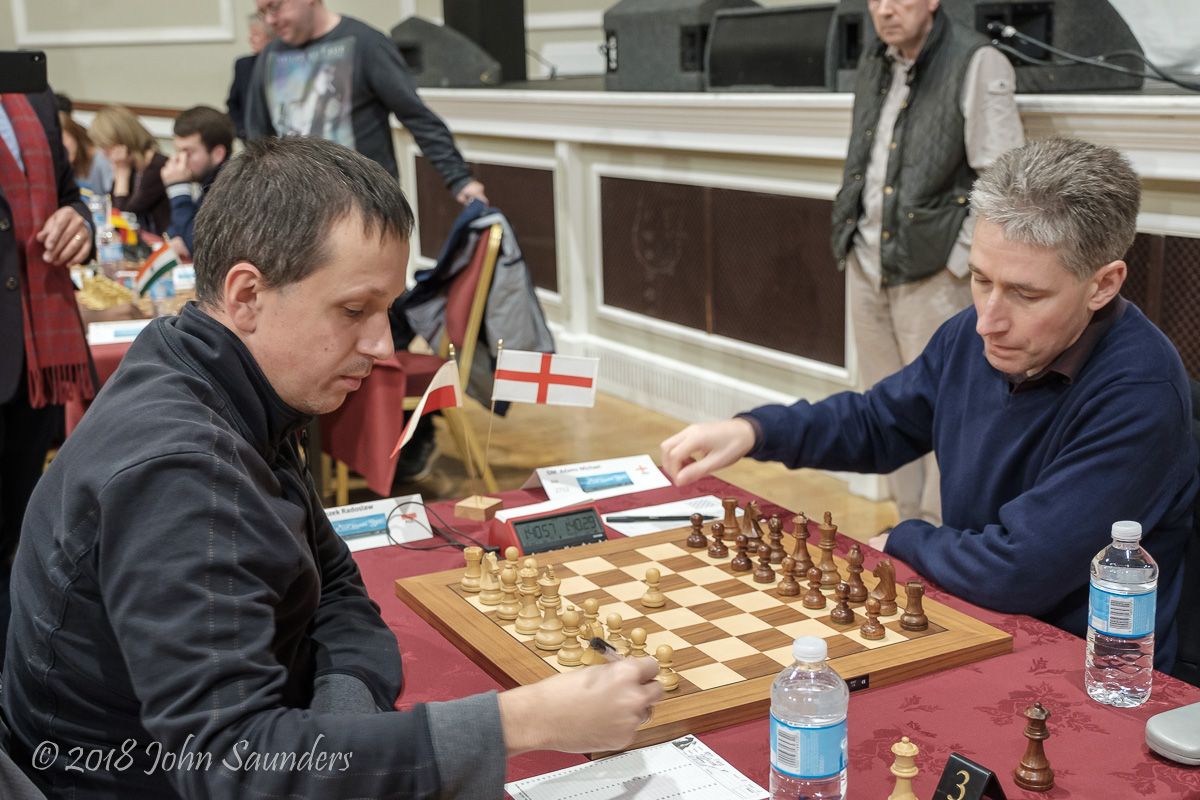 The opening played an important role in the board two encounter between Arkadij Naiditsch and Hikaru Nakamura as well. In the game, Nakamura went off the well-trodden paths of the Spanish Opening by going for the 3…g6 variation with the black pieces. Naiditsch also seemed to be in mood to play something new. He was quick to offer a pawn on his fifth move which Nakamura duly declined. 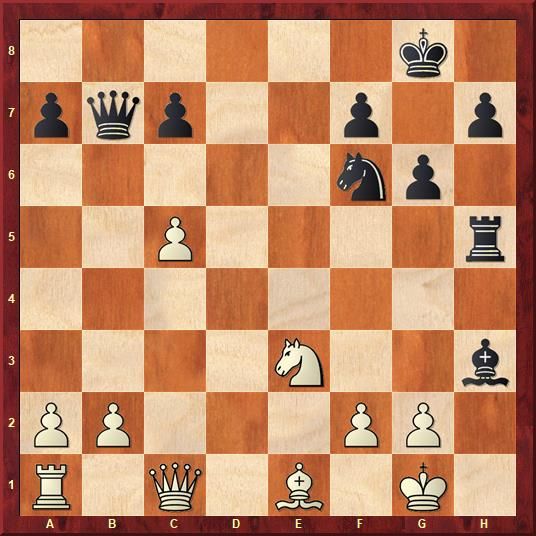 On the 26th turn, Nakamura went all guns blazing at Naiditsch’s king, giving up his bishop to rip open white’s castle. Both sides made some mistakes in the complicated position that ensued. A time scramble had raised the difficulty even higher. But once the storm had calmed, Naiditsch had remained with a decisive material advantage.

“I am very relieved,” Naiditsch told Fiona Steil-Antoni immediately after the game. “It was a very tough game. Actually, it started very well for me. I am surprised by Hikaru’s opening choice. I think I did nothing special and I was much better,” he added.

Explaining his slow play, Naiditsch said that he played slowly because “so many nice options”.

“I've been a bit slow today. If I would have 20 minutes more, the game would have been going well for me...Playing Nakamura is just very unpleasant. He's banging these moves.” 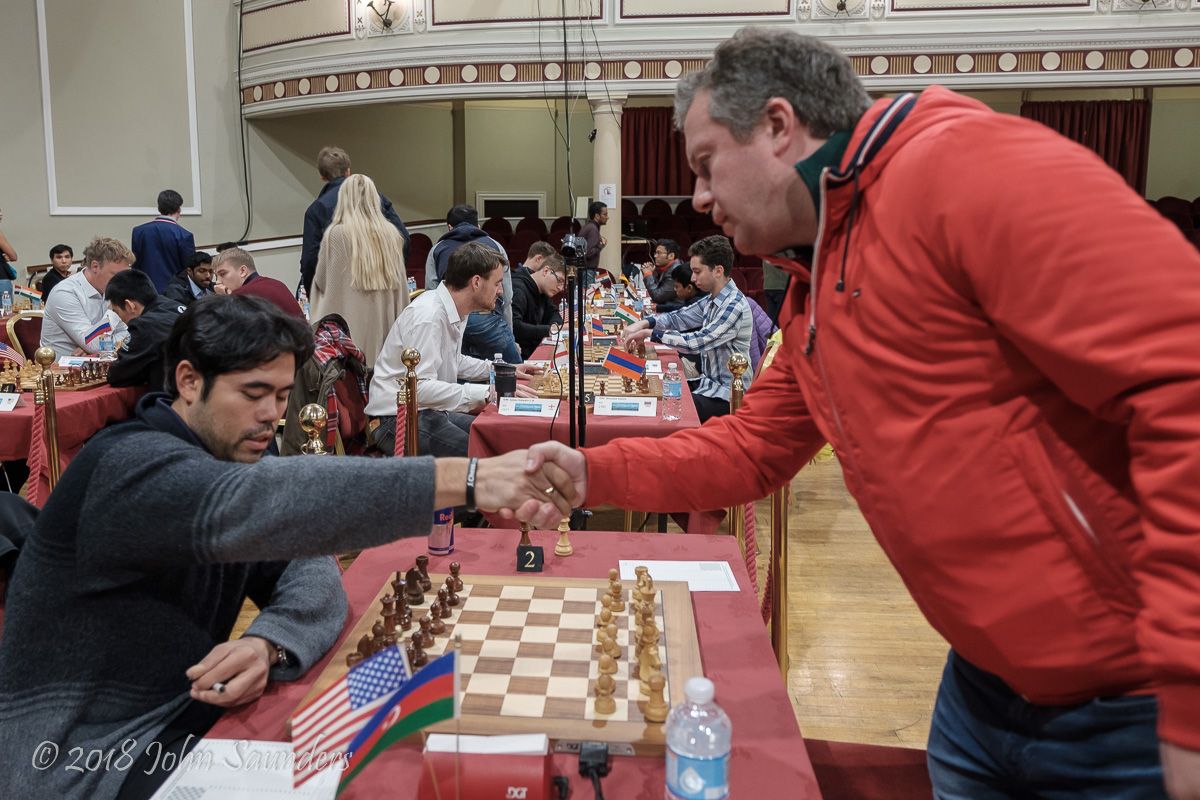 In the meanwhile, Indian ace, Viswanathan Anand got himself out of title contention after his second successive draw in round 8. Playing the young Russian GM Vladislav Artemiev, Anand went for a sharp line in the Sicilian Scheveningen and tried to generate attacking chances on the kingside. Artemiev, in response, sought initiative on the queenside but after an exchange of queens, an equal-ish rook and bishop endgame was reached. After exchanging a couple of pawns on the kingside, the players decided to sign peace and call it a day. 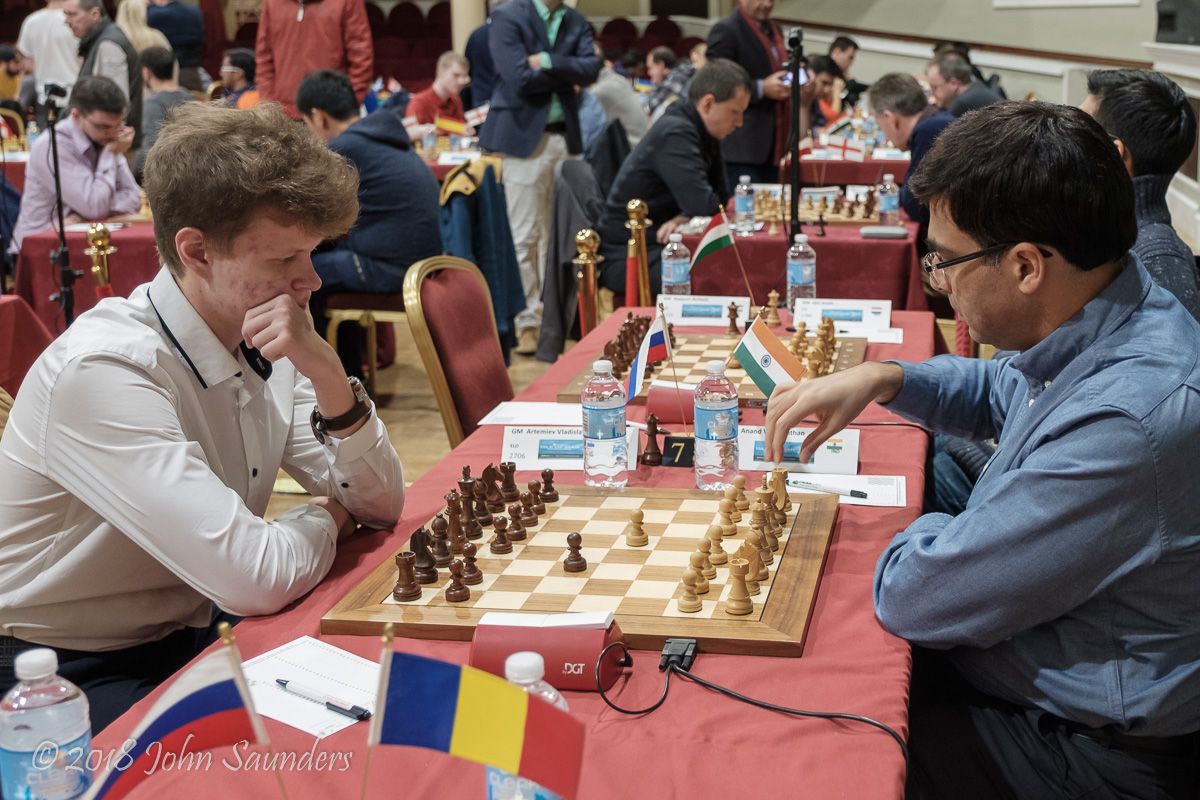 After a draw in the penultimate round, Vishy Anand is out of contention for the title prize | Photo: John Saunders

Vidit Gujrathi’s game against the German Grandmaster, Svane Rasmus began in the same vein and even ended with a decisive result. In the exchange variation of the Queen’s Gambit Declined, Svane flung his kingside pawns up the board to break open the floodgates to the black king. Svane’s own king, in the interim had remained in the centre.

Vidit responded masterfully, manoeuvring his heavy pieces into the white camp through the queenside to conduct his counter-attack. On the 26th move, Svane blundered and allowed Vidit a killing exchange sacrifice that caught his king in a mating net. By the 29th move, white was forced to throw in the towel. 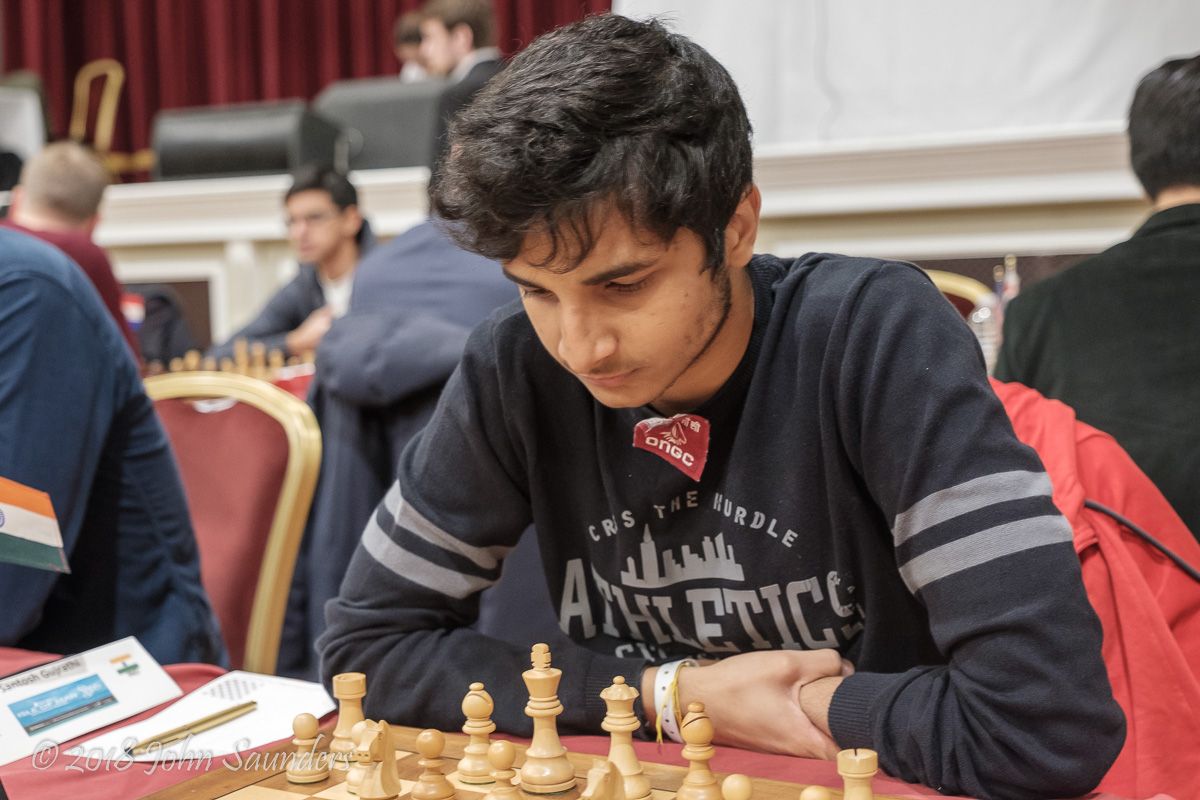 Another interesting attack on the king was seen in the game between the 13-year-old German prodigy, Vincent Keymer and the former World Championship runner-up, Boris Gelfand. Just one move before the first time control, the German teenager came up with a daring queen sacrifice and caught Gelfand’s king in a mating net by the 49th move.

In the final round, Keymer will have the black pieces against GM Emil Sutovsky and a draw would ensure him a Grandmaster norm. Earlier this year, this young boy had made headlines by winning in the B category of the Grenke Chess Classic amid some very strong 2700+ rated Grandmasters. 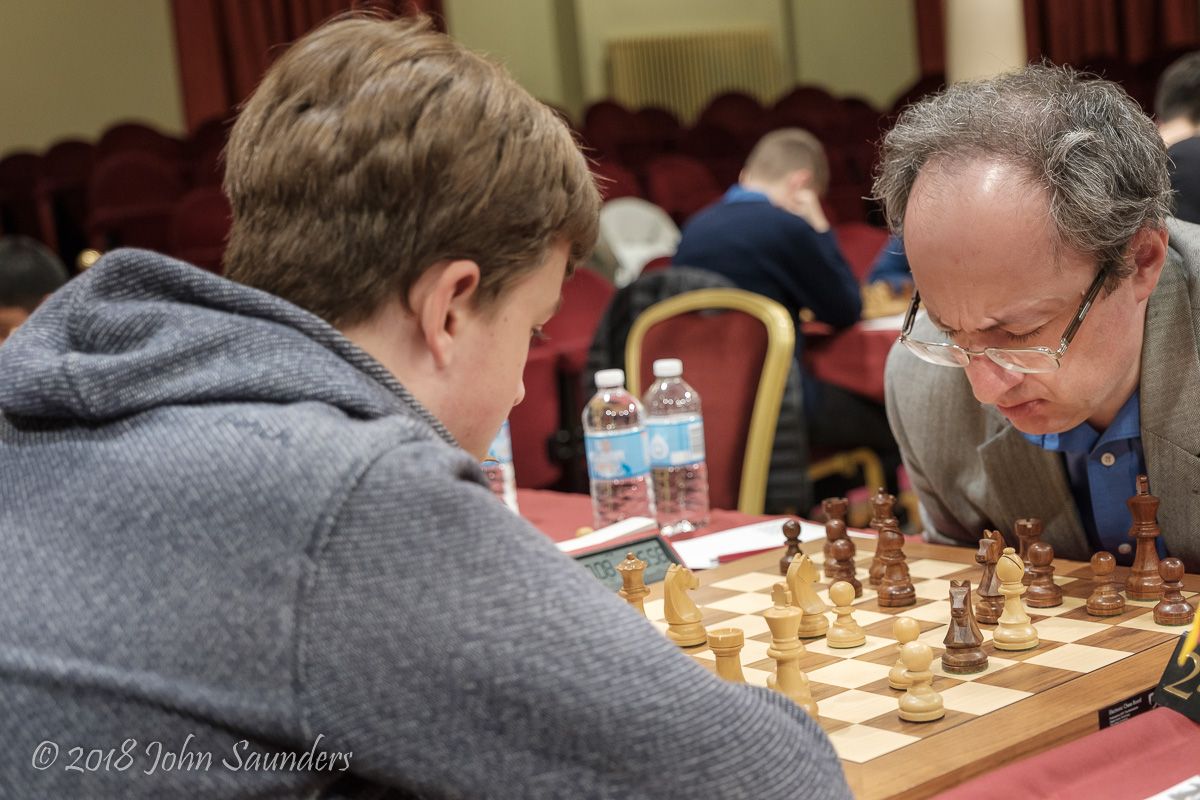 Indian prodigy, R Praggnanandhaa was pitted against 17-year-old GM Sam Sevian. In a 100 move long marathon, the American Grandmaster tried to trick his opponent in a rook endgame. However, Praggnanandhaa showed great endgame technique to hold to a draw being a pawn down. 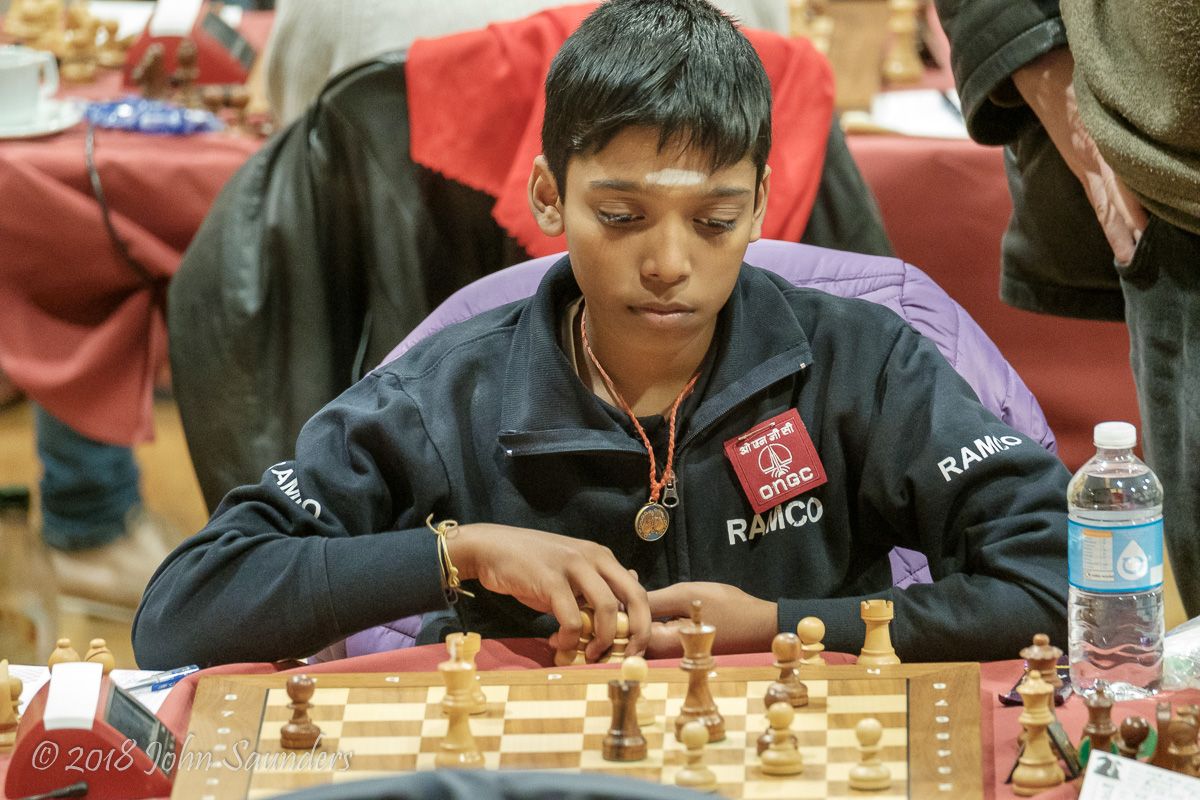 Praggnanandhaa’s sister, WGM R Vaishali played some enterprising chess against another Indian prodigy GM Nihal Sarin. In the Tarrasch variation of the French Defence, Vaishali gave up a full rook to generate a powerful attack against the white king. However, Sarin defended tenaciously and forced an exchange of queens after sacrificing an exchange. After the dust had settled, Vaishali had four pawns for her missing piece but with his bishop pair and a rook, Sarin managed to force a win in the complicated endgame that had ensued. 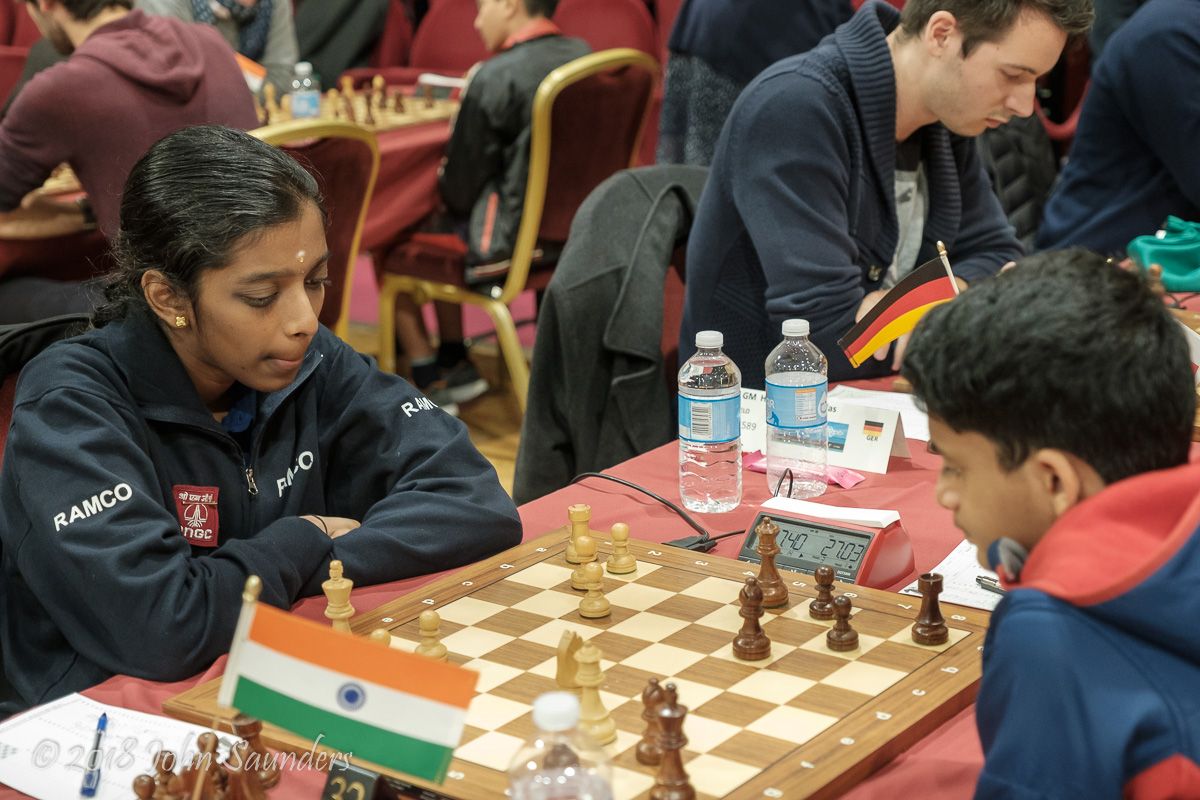 After the penultimate round, none of the Indians has managed to remain in the race for the title. The two leaders, Naiditsch and Wojtaszek will face each other in the final round. They are closely followed by a four player pack that includes Maxime Vachier-Lagrave, Wang Hao, Gawain Jones and Jeffery Xiong. 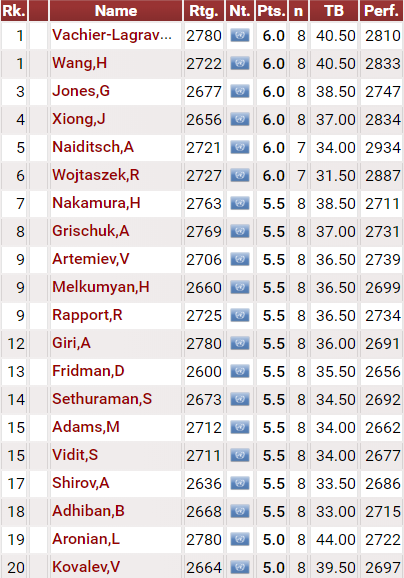