GM Abhijeet Gupta lost his second game in a row against English GM Michael Adams. Once again, Gupta's opponent joined the tournament leaders having defeated him. On board  5, SP Sethuraman and Viswanathan Anand played a sedate draw in a Symmetrical English. The top board draw between MVL and Naiditsch also played a short draw but this came only after some sparkling tactics in the middle game. In the meanwhile, R Praggnanandhaa played in a Tal-like manner to bring down IM Ravi Teja in just 32 moves in a Caro-Kann defence. We have a pictorial report.

At the conclusion of the antepenultimate round of the Isle of Man Masters, English numero uno, Michael Adams added himself to the leading pack. On the seventh board, Adams defeated GM Abhijeet Gupta with the white pieces. For Gupta, this was his second loss in a row which had helped his opponent reach the top spot. In the previous round, it was Hikaru Nakamura who had beaten Gupta to join into the shared lead.

In the seventh round, Adams was in his element, executing a positional squeeze over his Indian opponent. With the black pieces, Gupta had essayed the hot favourite defence of the tournament, the French. While the opening went decently well for Gupta, he missed a serious opportunity on his 20th turn. Had he found 20…h5, he would have ended up forcing an endgame where he would have had an extra exchange.  Instead, a few moves later in the middle game, he allowed Adams to liquidate into a better endgame.

On his 34th turn, Gupta gave up a pawn to exchange knights and weaken white’s pawn structure. But this did little to help black’s cause since, in the ensuing endgame, one of black’s pieces – either the bishop or the king – had to commit itself to the protection of the weak pawn on h6. Adams made the most of his mobility first by grabbing space on the queenside and eventually forcing a zugzwang to deliver the knock-out punch on move 54. Michael Adams  brought down Abhijeet Gupta in his trademark style in round 7 | Photo: John Saunders

Viswanathan Anand, who had climbed up to the joint second spot in the previous round, finished with a draw against his young countryman, SP Sethuraman in round 7. But his draw did not affect his tournament position as none of the players in the first or the second place – except Adams, of course – managed to win their game. In fact, all of the top six games of the round ended peacefully.

In the game, Anand had the black pieces. Sethuraman opened with the non-committal 1.Nf3 and the game soon drifted into the lines of the Symmetrical English Opening. After the initial moves, Anand’s pieces seemed a bit passive but the game was still in known territory. Anand came up with a new move on his 13th to avoid an exchange of queens while he broke in the centre but about six moves later, queens were traded anyway. This was followed by another long series of exchanges that left players in an equal minor piece endgame. The players didn’t take too long to sign peace after this. 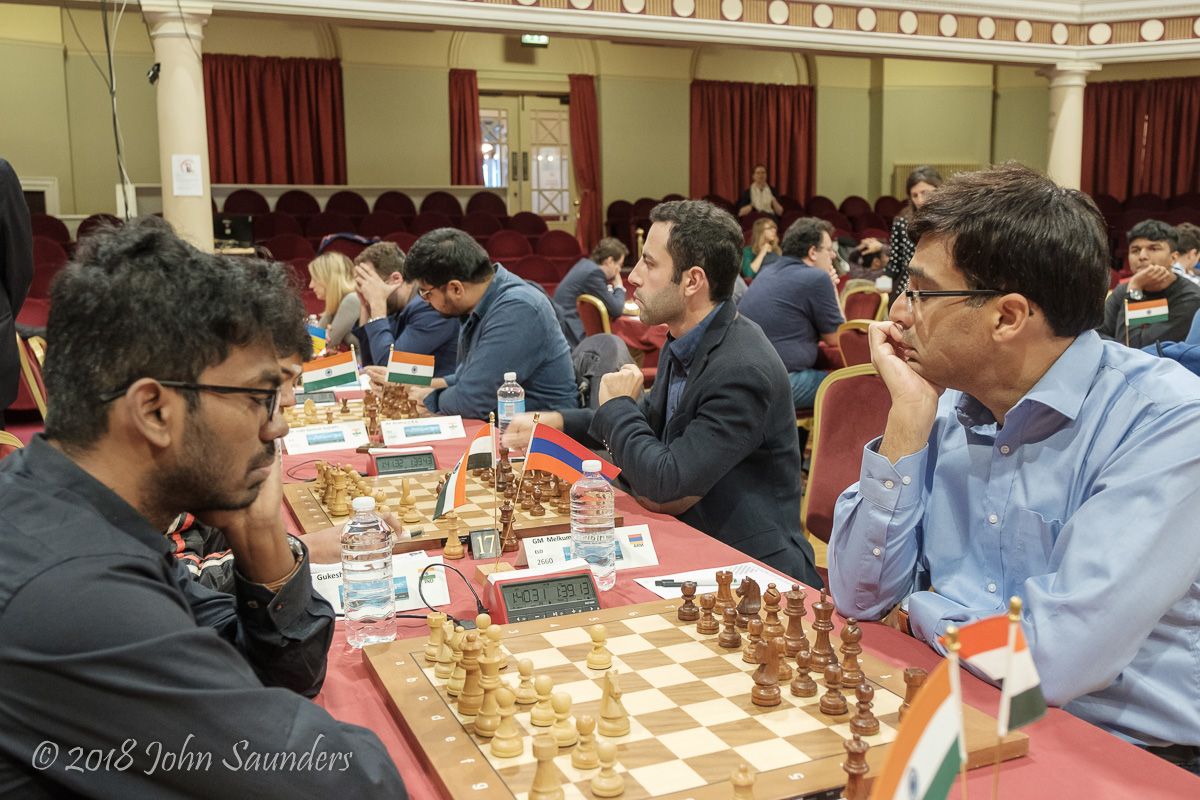 Maxime Vachier-Lagrave’s game against Arkadij Naiditsch on the top board was another quick draw. But unlike the Sethuraman-Anand game, this one exploded out of the opening. The game opened with the Ruy Lopez and Maxime, who had the white pieces, spent almost no time in the opening.

On his 17th turn, the French grandmaster found an interesting central pawn break that complicated matters for both sides. Naiditsch spent about 40 minutes at this point and eventually gave up a piece for two pawns on the 18th move. The situation was quite interesting since although white had an extra piece, he was struggling to get his dark squared bishop into the game. In the end, the players decided to repeat the position and call it a day after 25 moves. 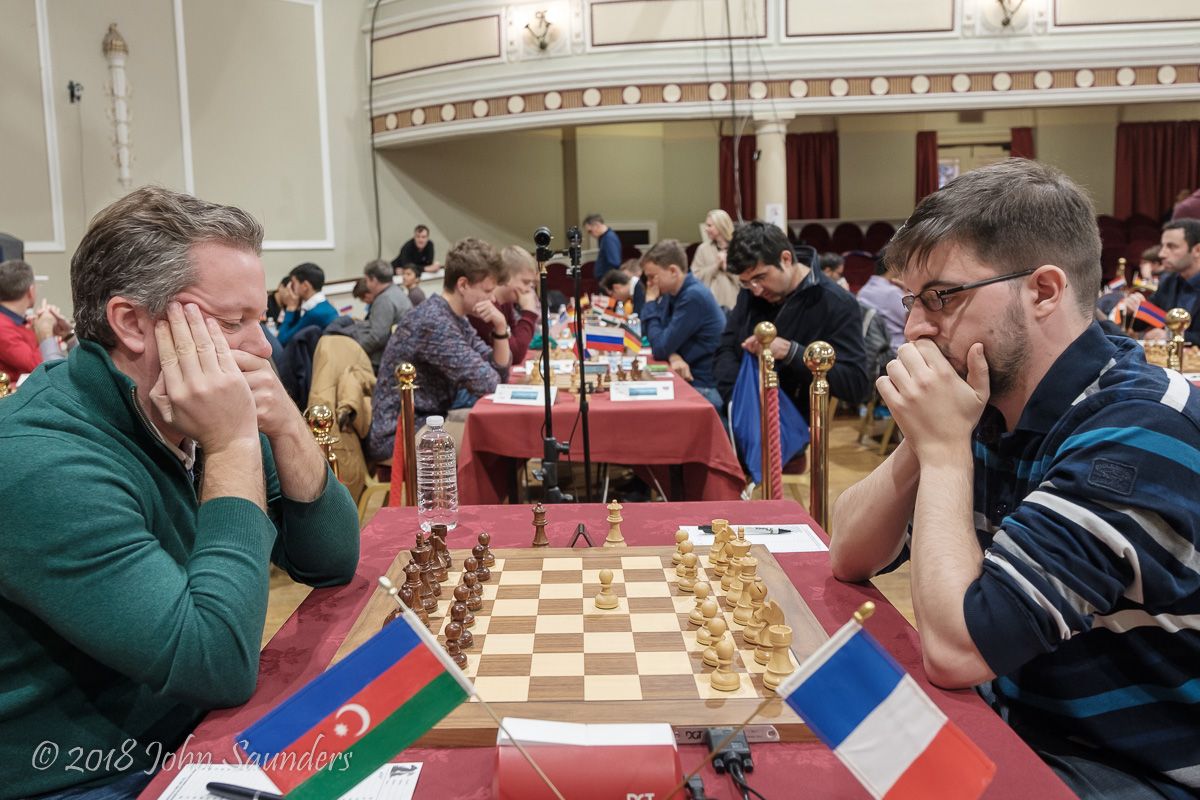 The game between MVL and Naiditsch was a short but interesting draw | Photo: John Saunders

“I had seen Arkadij’s reply but I thought I might find something there with a piece up. But ultimately I couldn’t and I just had to force a draw,” Vachier-Lagrave said after the game.

Meanwhile, IM R Praggnanandhaa won one of the most exciting games of the round against compatriot, IM Ravi Teja. Commenting on the game, IM Sagar Shah went so far as to say that the little genius’ tactical play brought to mind the style of Mikhail Tal, a former world champion known for his magical tactical prowess. 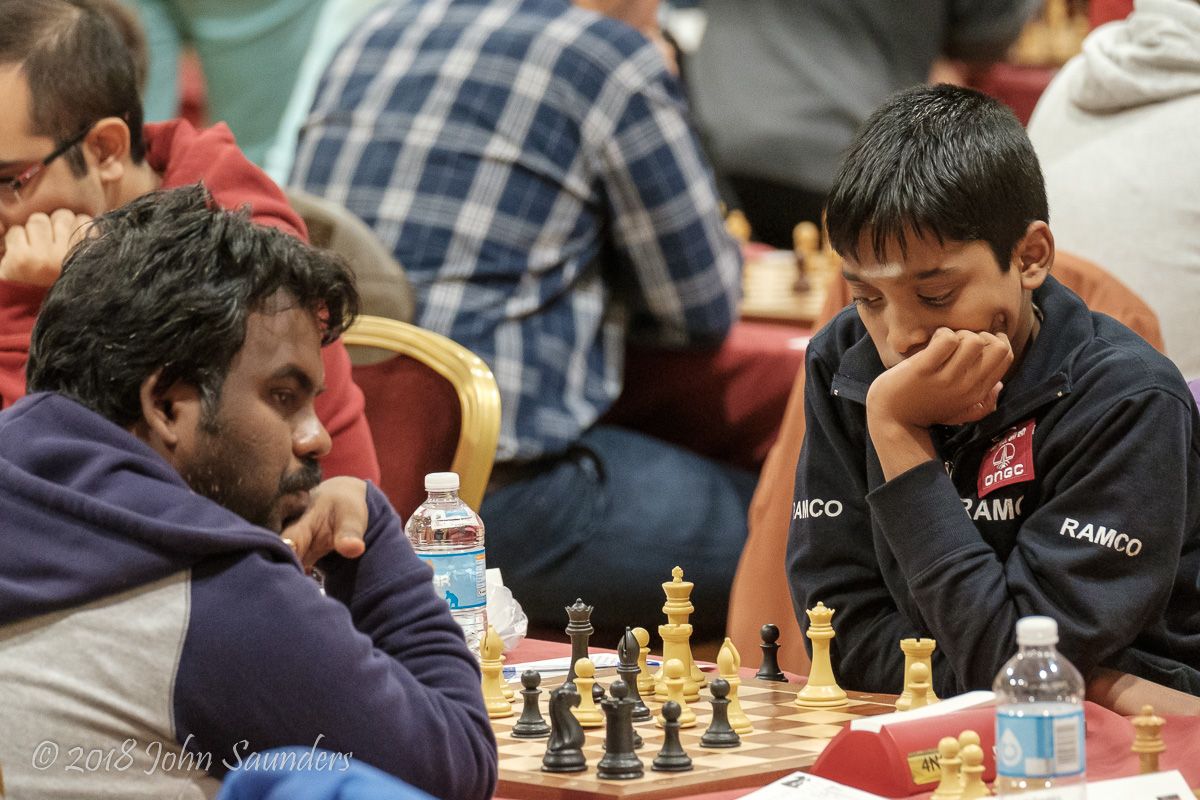 Praggnanandhaa had the white pieces in a Caro-Kann Defence game. Teja went pawn grabbing quite early in the game, on move 11. Showing great attacking sense, Praggnanandhaa lashed out with some very accurate attacking moves to get his opponent on the backfoot. A highlight of the game was Praggnanandhaa’s rook sacrifice. 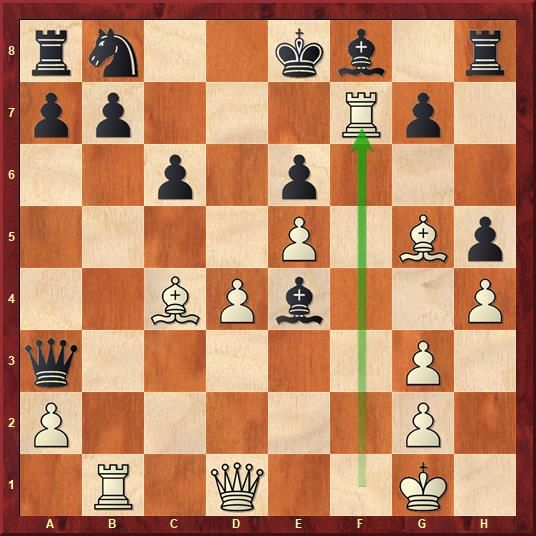 Teja, however, declined the material offered but, a few moves later, was forced to sacrifice his own queen. After this, it was only a matter of technique for Praggananandhaa. Finding a few more accurate moves, he forced resignation by move 32.

How similar is your play to Praggnanandhaa's? Find out in this video with IM Sagar Shah | ChessBase India Youtube

After the dust of the battles had settled, the leader count stood at a whopping seven. All of the seven players – Maxime Vachier-Lagrave, Hikaru Nakamura, Radoslaw Wojtaszek, Wang Hao, Arkadij Naiditsch, Michael Adams and Jeffery Xiong – have scored 5½/7. Anand, along with 11 others is close behind on 5/7. With so many players tied at the top, it seems like the tournament will end with a crowd on the top spot. 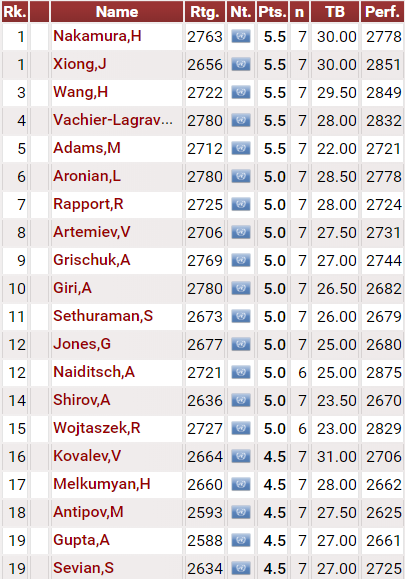