The National under-17 was being held in Sonipat, Haryana from the 3rd to the 11th of September 2018. Many of the top Indian players had gathered to play in this championship. Some of the big names included Mitrabha Guha, Srijit Paul, Kushager Krishnater, Tarun Kanth, Vatsal Singhania. All of them had an Elo of 2200+. But the tournament was won by Vedant Panesar, who was the 8th seed in this tournament. While Vedant is very well known in the local Mumbai circles as a strong player, this was his first huge success at the national level. A thoroughly hard working boy, Vedant has able to maintain a good balance between chess and education. In this article we get to know the champion better thanks to an interview by Avathanshu Bhat and Vedant also sends us six of his annotated games from the tournament for the readers of ChessBase India to learn and enjoy.

The under-17 champion with a golden heart

When the Indian visually challenged team was preparing for the World Team Championships 2018 at the Andheri Sports Complex in Mumbai, one local boy Vedant Panesar was extremely interested to come and visit. He would message me even before the camp had begun if it was possible for him to come and play a few games with the visually challenged players and help them with any sort of preparation. Vedant is a strong chess player and at that point he had an Elo of around 2100+. Of course having a player like him practice with the top visually challenged players would help them improve and get better prepared for the all important World Team Championships 2018 in Bulgaria. And so we called Vedant. He came to the training session with a lot of excitement and enthusiasm.

Vedant Panesar (left) fighting it out against Ashwin Makwana

The team consisted of five players. As you can see Vedant's presence ensured that no one had to wait on the sidelines!

And that was not all, Vedant also gave his best by giving puzzles to the players and helping them to solve it by giving hints. In this picture you can also see Om Kharola on the left who visited the camp as well.

Call it a co-incidence or Karma theory or whatever you like! But after a few months, the national under-17 was being held in Sonipat, Haryana from the 3rd to the 11th of September 2018. And guess who finished in the top two spots? It was Vedant Panesar who became the national under-17 champion and Om Kharola who won the second place! And they were not even the favourites. Vedant, with a rating of 2124, was the eighth seed, while Om Kharola was the 11th seed. 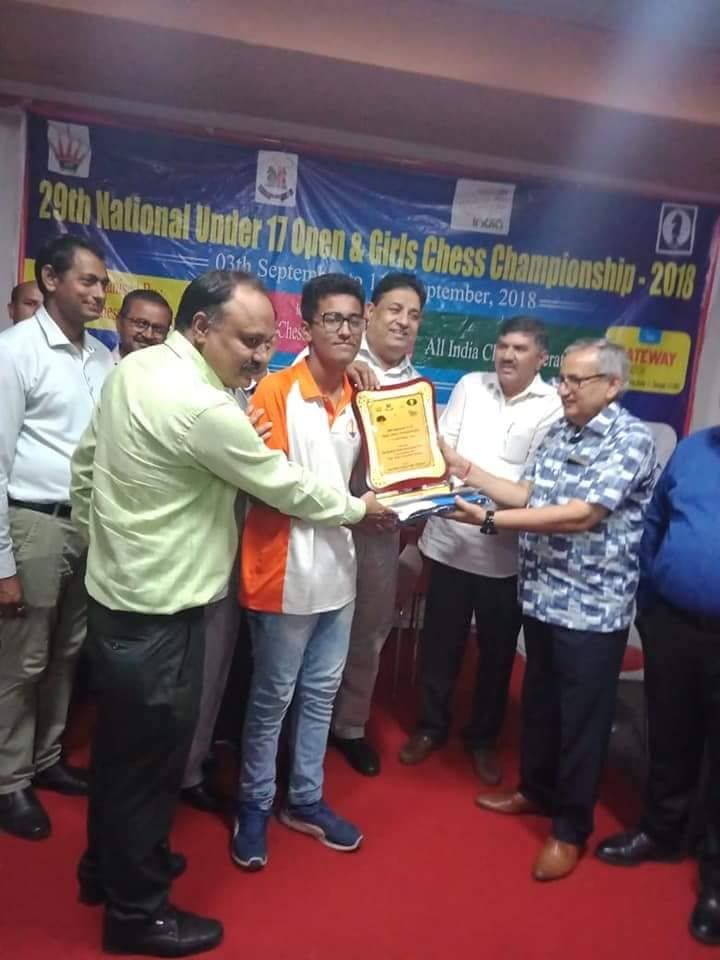 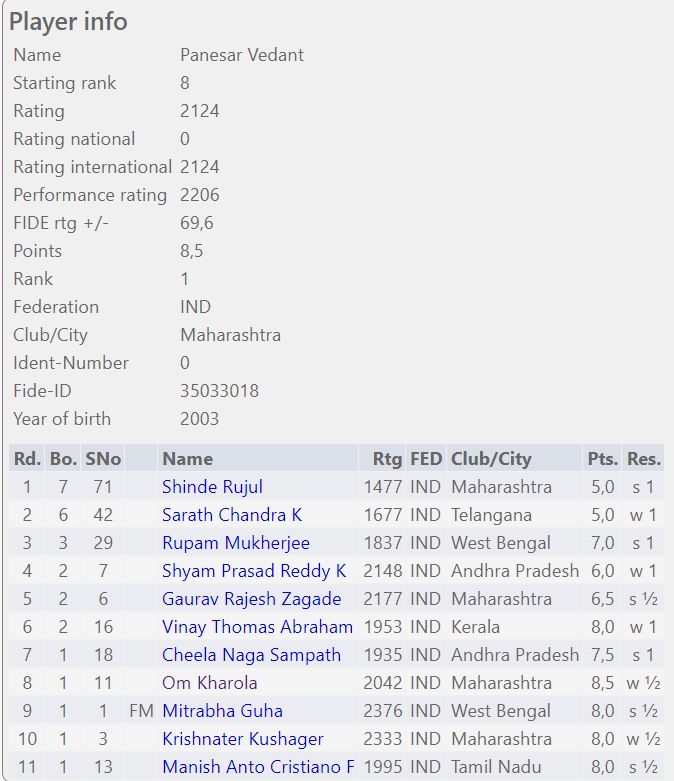 Vedant's unbeaten performance at the under-17 nationals. He not only won the tournament, but also gained 70 Elo points!

Interview with the under-17 national champion Vedant Panesar

He is a very calm and composed boy, and has been playing chess for as long as I can remember. He could be seen in almost any local tournament, and was always on the prize list. We are talking about Vedant Panesar, who not long back, won the Nationals U-17. What makes his achievement so commendable is the fact that he is in 10th Grade, and was deep into his exams just two days before the start of the tournament! He has also been a regular player in the chess circuit since a long time, as regular players at local tournaments in Mumbai will tell you. Vedant has indeed put a lot of effort and almost uncanny patience, to the point where most people would have given up. He did not, and here are his results for doing so! Read on to find out what he has to say on all this.

Avathanshu Bhat (AB): You just recently won the Nationals U-17. Congratulations! How did you feel in that moment?

AB: You have worked very hard on chess since quite long back; after all these years, your perseverance and patience has shown its result. How did you keep your cool for so long? Any advice on that for players?

VP: Truly yes. I sure have put a lot of hard work into the game and desire to do so in the future. I think I am very lucky to be able to manage my cool for so long. I would advice other players that the game now has become very dynamic in nature (due to  k40) which leads to huge fluctuations in the rating, but one should always remember that his rating is only a number whereas the actual playing strength and the love for the game matters. I also believe that if one works hard on anything he is bound to succeed even if any obstacle comes in front of him.

AB: You are in 10th grade. A lot of people break away from chess for studies and don't return for a long time, maybe never. They believe you can't play chess after reaching 10th. You have showed them otherwise, and in a wonderful way! How did you balance both school and preparation?

VP: Honestly speaking I was not able to prepare much for the tournament (as my exams finished just 2 days prior to the tournament) although I think, Preparing for my exams makes me a better chess player (The will to perform increases). Generally speaking I haven't been able to focus on chess this year but still would somehow practice it

AB: Your good friend Om Kharola finished second, one position behind you. How was it like, playing against a close friend?

VP: Om Kharola is a very tricky and a dangerous player to face. He has an unconventional attitude towards the game which makes it interesting to play against him. He plays like a magician and always has tricks up his sleeves. Before the round I was quite stressed but then I just realised that getting more stressed won't help me. I should prepare well. I checked his openings and meditated a while to get ready for the round

AB: Who all would you credit for your achievement? Whom do you seek guidance from?

VP: I think there are many people who deserve to credited for my success, but if I have to name them then would be my parents, my coach Vakil Akhtar, IM Rakesh Kulkarni and Abhijeet Joglekar. They have all have helped to become a stronger player and also a better human

AB: Indeed, you are becoming a stronger player, and are rising to the top at a fast rate. ChessBase India wishes you best of luck for all tournaments to come, and we hope you continue to do so!

Game analysis by the under-17 National Champion Vedant Panesar:

We asked Vedant to send us his favourite game from the tournament with annotations for the readers of ChessBase India. Vedant was kind enough to send us six of his games! We recommend that you go over these games carefully. Perhaps you can even download them (using the save button on our replayable board) and then see them on your local ChessBase software. These analyses are special because more than just variations, Vedant has also put in his thoughts and feelings and gives you a complete picture of what he was thinking on the board. Such candidness from a national champion is truly refreshing.