NCS Japan’s official over-the-board event in Tokyo area resumed with the Halloween Rapid Tournament after almost seven months. Full participation and a lot of fun games ensued. It was a one-day rapid tournament which took place on 24th October, a week before Halloween. Mayur Gondhalekar, currently residing in Japan, a chess enthusiast who loves to play chess and follow the sport, writes his experience after winning his first ever over-the-board tournament in under-1600 category. He also shares a picturesque checkmate which he did on the board and shares a few games from the event. For those who are yet to attend an otb event, there is a very nice video made by WCM Natsumi Kojima which shares dos and don'ts of visiting and spectating tournament games.

OTB chess is slowly restarting in Japan. Kyoto and west Japan started off with the Gion Open 2, and Tokyo side followed with the Halloween Rapid Tournament held on October 24 2021. This time, rather than sit on the fence, I decided to participate as soon as the announcement was made, thinking it would be nice to meet the players, staff, and play chess in 3D again. The tournament was “open style”, and had 6 prizes: best 3 overall, and best 3 U1600 (NCS Japan Rapid rating). I had the highest ‘U 1600’ rating at the start and joked with a friend about ‘feeling the pressure’ to make it count.

The tournament was a one-day event, featuring five rounds with the time-control of 15 minutes + 10 seconds/move from move 1. Entries were limited to 34 participants, with anti-corona measures in place (masks, disinfection, distancing, ventilation, no post-game analysis etc). Participants were not required to record all moves, though quite a few players did so for the first 8-9 minutes.

Being Halloween open, I expected to see a little bit of dressing up, but I guess the players wanted to make the opponents see ghosts on the board instead.

It was a thoroughly enjoyable day, which finished with my Round 2 opponent and the top seeded Ogawa Tomie winning the tournament, and me securing my first ever ‘first place’ (U1600) in an over the board event.

Welcome back to OTB

Games started on time at 10:00 am, and I was up with the black pieces against Shimizu Kenichi san. There was nervous tension playing OTB after seven months. Hoped for a good start. A relatively quiet game followed for most part, till my opponent missed my idea on the 26th move, and from there I had a few tactics to win the game. My opponent flagged just as he placed the queen on c7. 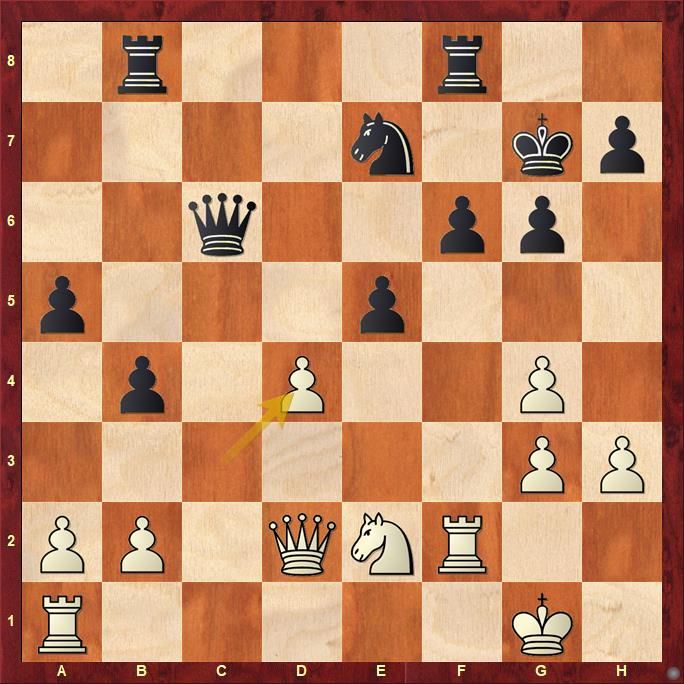 Black to play. What did white miss after 26.cxd4 ?

This win got me a direct promotion to board no.1, against top seed Ogawa Tomie. A very humble, friendly person off the board and equally strong on it, he eventually outplayed me and won with more than six minutes to spare on the clock. I was better after Black’s 16...Ne3 and saw that b2 was a nasty threat later in the game. This is where I had a short-term blank out, and made a mistake that cost me the game. A mistake. Yet, this better position against a 2182 player gave me a lot of confidence to take into the last three rounds. 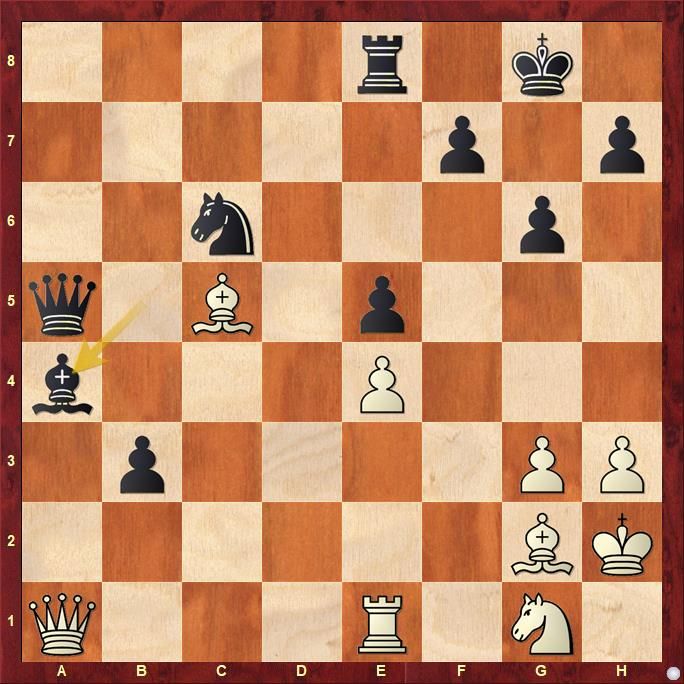 Find White’s best continuation (that was missed in the game).

Game 3 saw me face a younger Indian player, Aviral Sharma, who employed the Reti system with c4, Nf3, g3 setup. I felt myself go a little astray in the middle game, even allowing my opponent a chance to at least get a draw. Regaining my focus, eventually it boiled down to holding the position and waiting for the opponent to err in time pressure. Eventually, my passed pawns decided the game.

Game 4, my second white of the day, saw me face-off against a new player (hence unrated). These games can be very tricky, as we get to figure out the opponent’s strength only during the game! The opponent, Seo Minsu san, was also the first Korean player I faced over the board. He played quite logically, equalized and started putting a bit of pressure on me. Fortunately, my bishop, knight and king were placed on the correct squares, and could move around just-in-time to avert all threats and force the game into a drawn ending. After reaching the position below, my opponent tried a lot moving his bishop around, even setting a small trick with Bh2 and moving the king over to the kingside, but all I had to do was to move my bishop between c3, d2, e1 and protect the f-pawn with the King when necessary, and finally a draw was agreed upon - my first OTB draw in 2021. This was indeed a very intense game, like my opponent shared later. 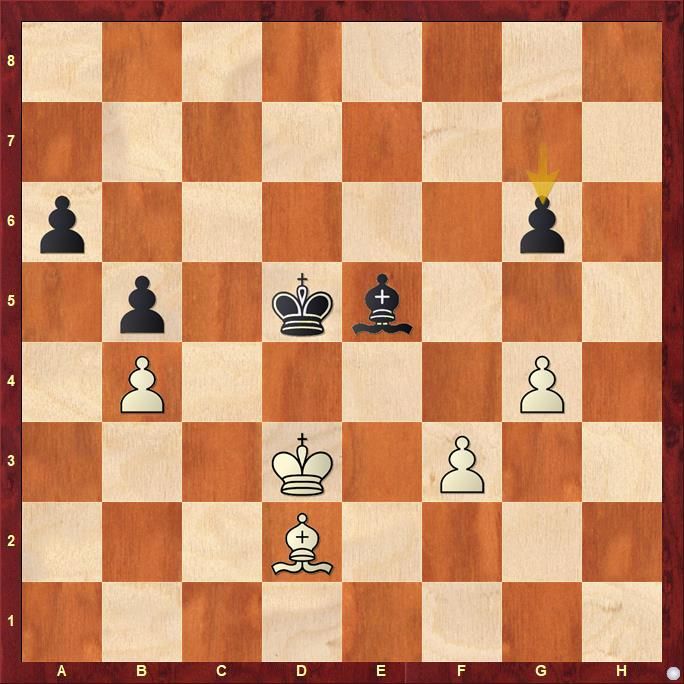 This meant that I went into the last round with 2.5 points, playing the black pieces and facing a stronger opponent (FIDE 1794). Mentally, I decided to play aggressively and not worry about the result. The result? I played what was probably my craziest game with the Sicilian Najdorf! This game had all the elements – attack, defense, calculations, miscalculations, time-pressure, psychological tricks – that Chess can offer.

The moment my opponent played 6.f3, the game between GM Viswanathan Anand and GM Jordan Van Foreest played in the Croatia Grand Tour 2021, and shown live on ChessBase India stream came to my mind. There, Black had ripped open white’s a and c-files by advancing the queenside pawns and had a scary attack before going wrong and losing.

I decided to go down that road and got into a similar position where I had ripped open white’s a and c-files and with a little bit of co-ordination could make a deadly charge on the white’s king. This made my opponent consume a lot of time, after which both of us went on a mutual calculation-and-miscalculation sequence, where, from a clearly better position, I went into a clearly losing position. Here my hopes rested on somehow getting a rook to c8, and dislodging the queen from the strong d5 square. A dangling carrot of a mate-in-one on f6 finally did the trick, but once the queen moved to d4, my forces were ready to swoop in. My opponent was already playing on seconds, and my dancing knight spelled the death-knell with a picturesque checkmate at the center of the board. 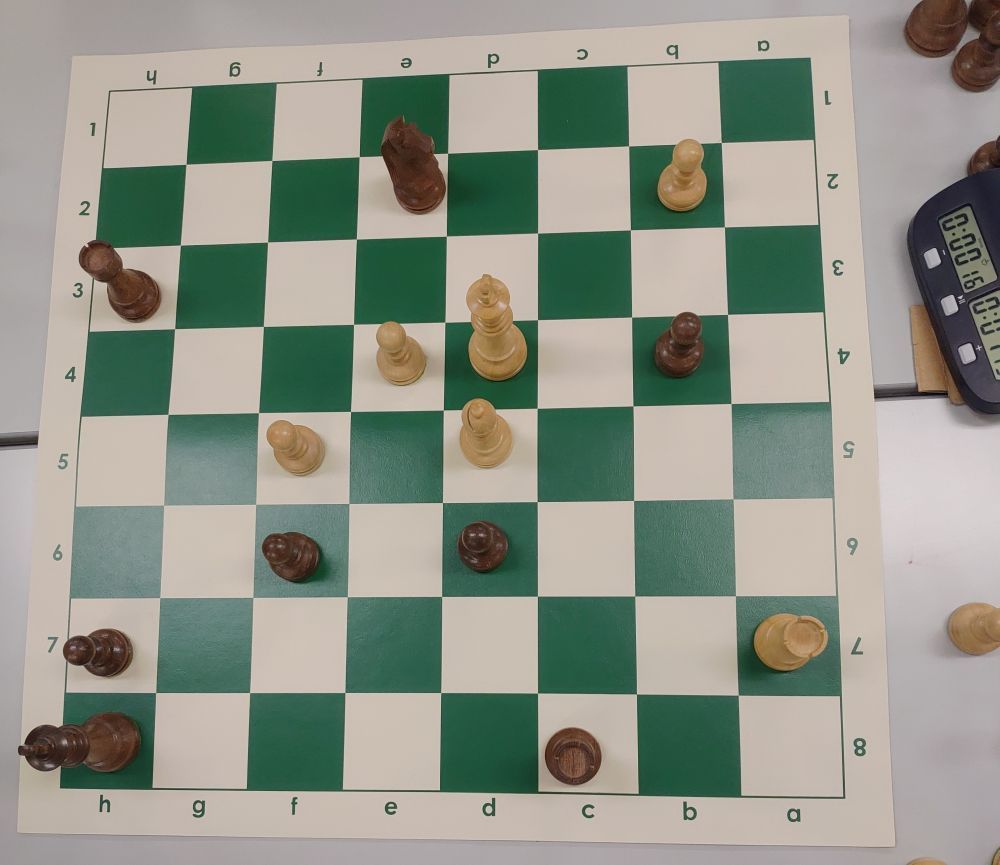 Here is the 2D diagram of the final position

Imagine doing all this while playing only two moves with your queen, but taking down the opponent’s game when giving it up!

I was so pleased with, and engrossed in this game, that I completely forgot there were scores to be calculated and prizes to be handed out. So, it was a pleasant surprise to find out that I secured the first place amongst players rated under 1600 (overall 7th on tie-breaks). This was my first ‘first place’ finish in an OTB event, and certainly the icing on the cake of happy chess. Only afterwards did I check the results sheet.

Replay games from the event

Tournament Director and Chief Arbiter Akihiro Yamada san opening the event and giving instructions
Halloween Chess Tournament, by NCS Japan
Julius Endrina vs Ganesh Kumar, Round 1
Mayur with Endrina Julius and Ogawa Tomie
With my opponents where I have a 1-1-1 score in this tournament! L-R: Seo Minsu, Kimura Ryota, Mayur, Ogawa Tomie 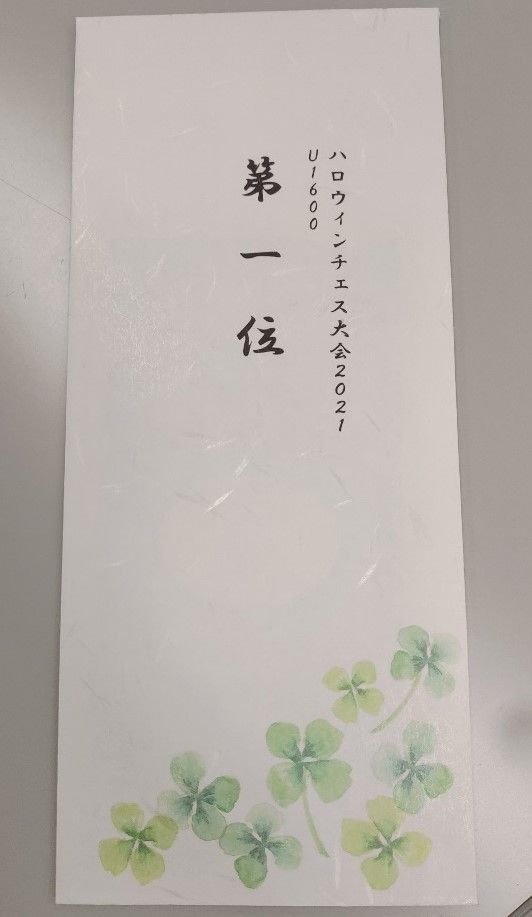 How to observe OTB games

It was a pleasure to meet WCM Natsumi Kojima, who had come to the venue as an observer, and to help. She has covered an important topic in a short video on her channel: How to unobtrusively observe OTB games

• Inform organizers in advance that you would like to be there to observe.

• Take care not to obstruct any players moving about.

It was a pleasure to meet everyone in person, especially the opponents who have sparred only online so far. The feel of playing a crazy game and ending on the winning side is very different over the board. One gets to see a variety of reactions, and of course the urge to first discuss the game and only later look at engine analysis.

Finally, as always, hearty congratulations to NCS Japan for successfully restarting OTB tournaments, as well as special Thank you to Chessbase India team, especially Sagar, Amruta and Shahid for giving me the opportunity to write about Chess in Japan, due to which I am able to explore the chess world beyond ‘just playing’ and contribute in useful ways. 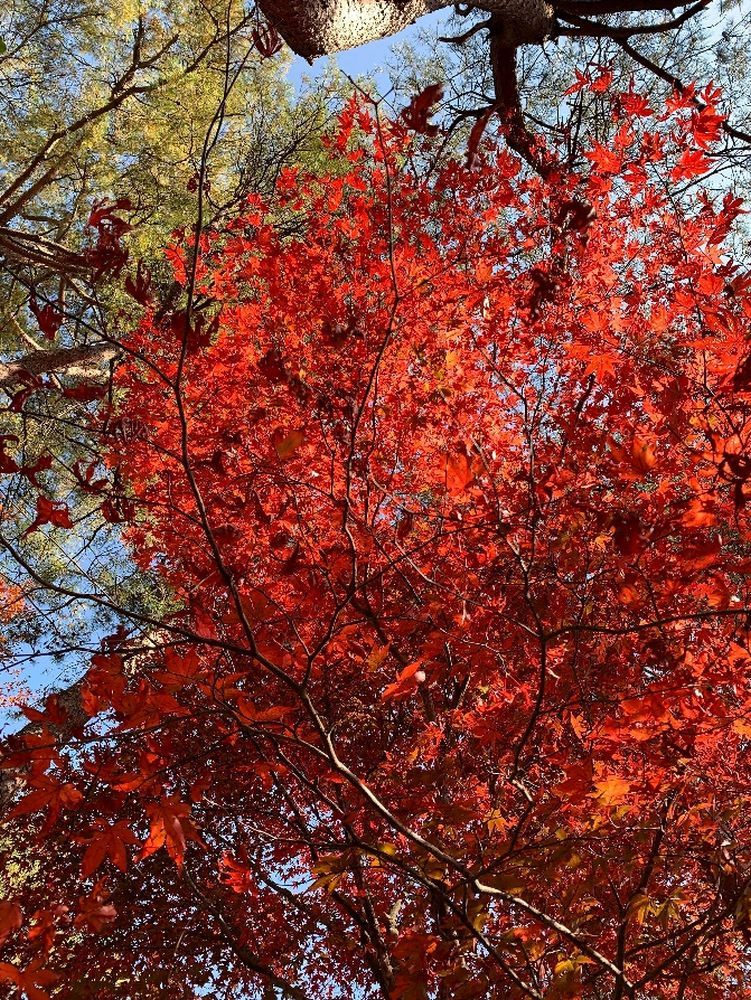 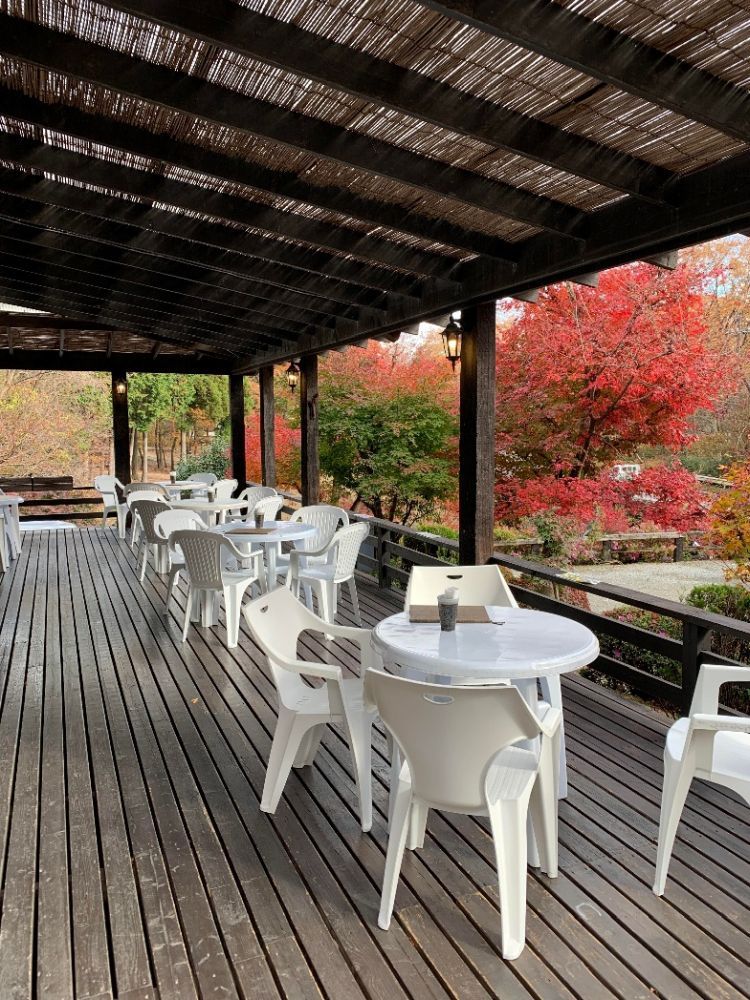 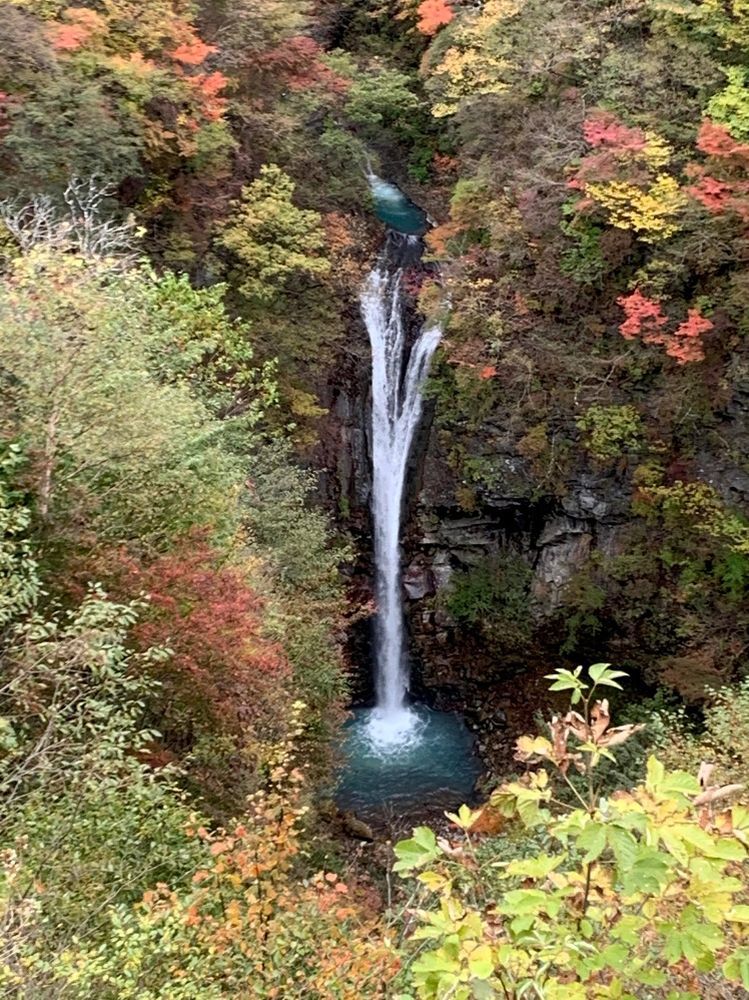