Two years ago we came across a very interesting heart warming tale about a Fide Master who accepted a very challenging job to teach the game of chess to prisoners in Italy. He shared with us in length about his experience at the maximum-security prison of Spoleto (Italy) and how it changed his perspective about life. The best part of it was the testimonial of the prisoners on how the game brought a change in their life and how it became the best friend to them. In this article Mirko Trasciatti comes back to share with us another interesting tale and a continuation to the first one.

From 13th to 15th December 2018 a chess tournament took place in an Italian correctional facility. For the first time a chess tournament divided in 7 rounds with a time control of 60’ + 30” starting from the first move and valid for the change of FIDE standard rating was played by six inmates attending a chess class sponsored and organized by CONI “Sport in carcere”. This innovative project gave them the opportunity to play against people other than prisoners and to gain experience in this game. 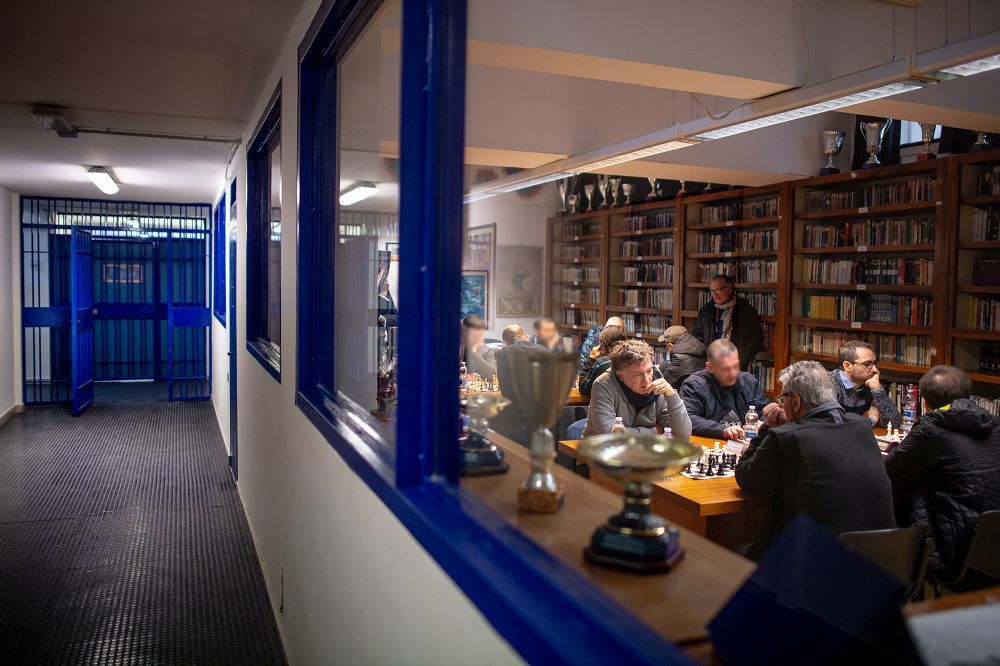 The venue right beside the prison cell, history was created on 13th December 2018 at the library of
prison of Spoleto (Italy)! | Photo: Mirko Trasciatti

The President of CONI Umbria Domenico Ignozza, the Chief Commissioner Marco Piersigilli, the Spoleto City Councilman Maria Rita Zengoni, the project manager CONI Umbria Valeria Natali, the Educator Sabrina Galanti  and the Inspector Edoardo Cardinali were present at the tournament to support the project and to highlight the importance of chess among inmates. 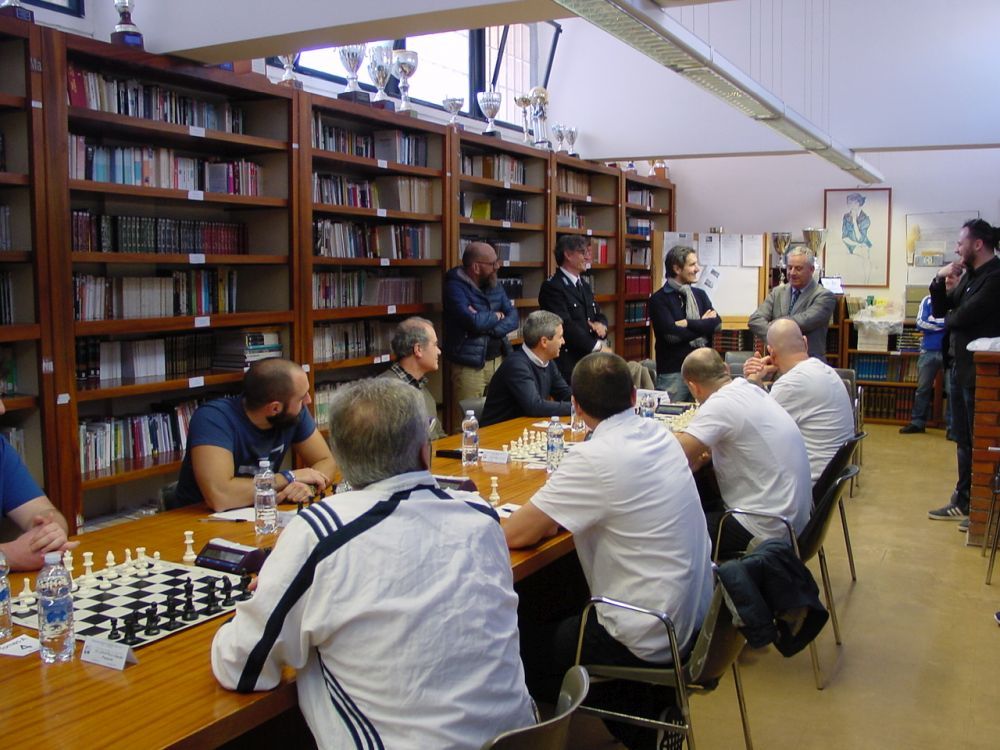 The players listening to the team which has made this epic battle possible. | Photo: Mirko Trasciatti

I have taught chess in the Spoleto correctional facility for 4 years and the inmates have come every day to study the rules of the game and to train. Not only the chess class, but also the tournament have been sponsored by CONI, by the Bologna “Le Due Torri” shop that helped us with the chess books and by the monthly magazine “Torre & Cavallo” that gave us a free subscription. It was a very successful project and in these days I received lots of messages of congratulations, as for example:

“I am glad to know you organize something like that in jail. I would like to have some information to write an article about it and to organize it in Rome too”.

“Congrats! It a great experience both for inmates and for the people who have the opportunity to enter into a jail and meet inmates. It is a learning experience”. 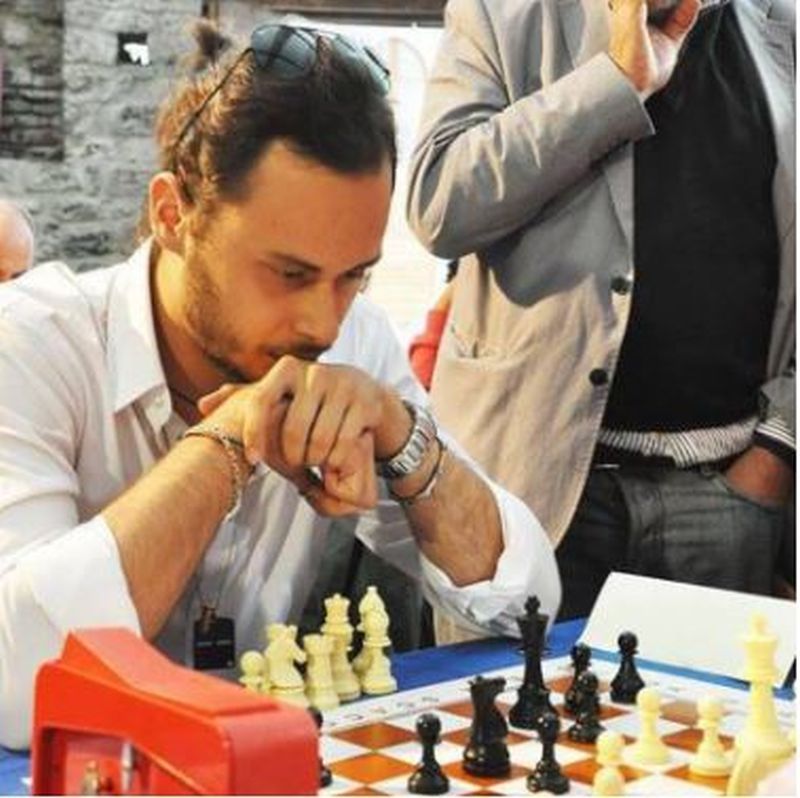 Over the past few years, the inmates had the opportunity to take part in other small tournaments as for example Rapid 2016, Blitz 2018, the Italian team championship FSI (division C) in April 2018 and an online international match against Chicago prisoners. The winner of the chess tournament played in December is Andrea Martelli (score 5.5/7), who lost only against Vladimir Haxhiu during the second round. Vladimir Haxhiu had a great performance and he is now entitled to be part of the international rating list. He got a score of 4.0/7 points only half a point away from the podium. 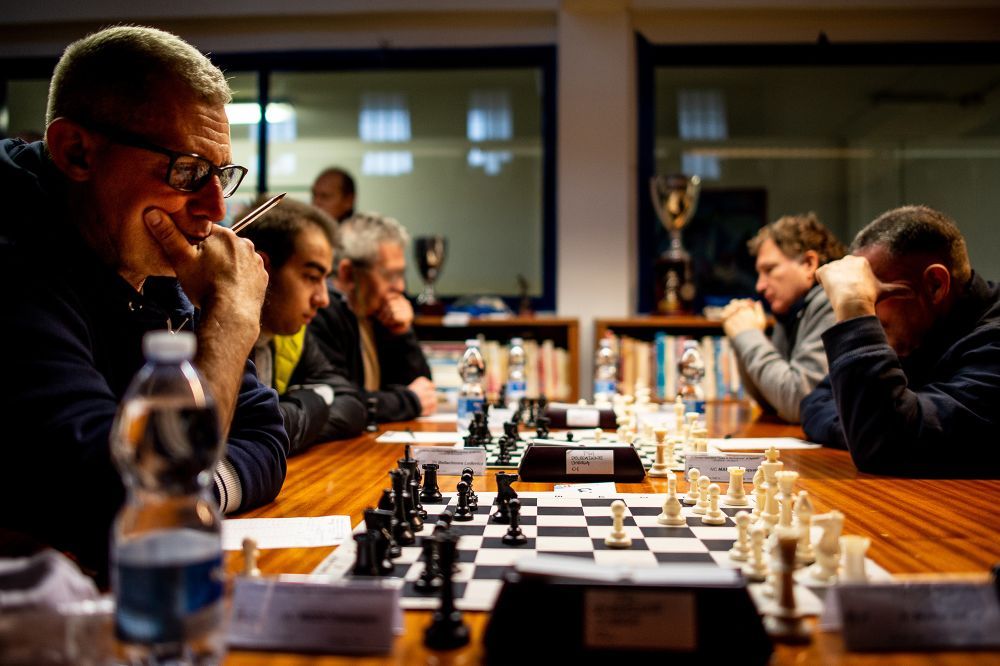 Two men look out the same prison bars; one sees mud and the other stars - Beck. | Photo: Mirko Trasciatti

One of the players will be soon released and we are happy to know that he wants to keep playing chess in his hometown. After the ritual acknowledgments, CONI Umbria gave to the inmates t-shirts and chessboards useful to train and play in jail. At the end of the ceremony, I played a video called “Colors od babel” made by Luca De Paolis (Nickelodeon Prize 2018) to point out the strict connection between the chess game and social aspects. It was a learning experience in which different culture and different people had the opportunity to meet and grow together without preconceptions. 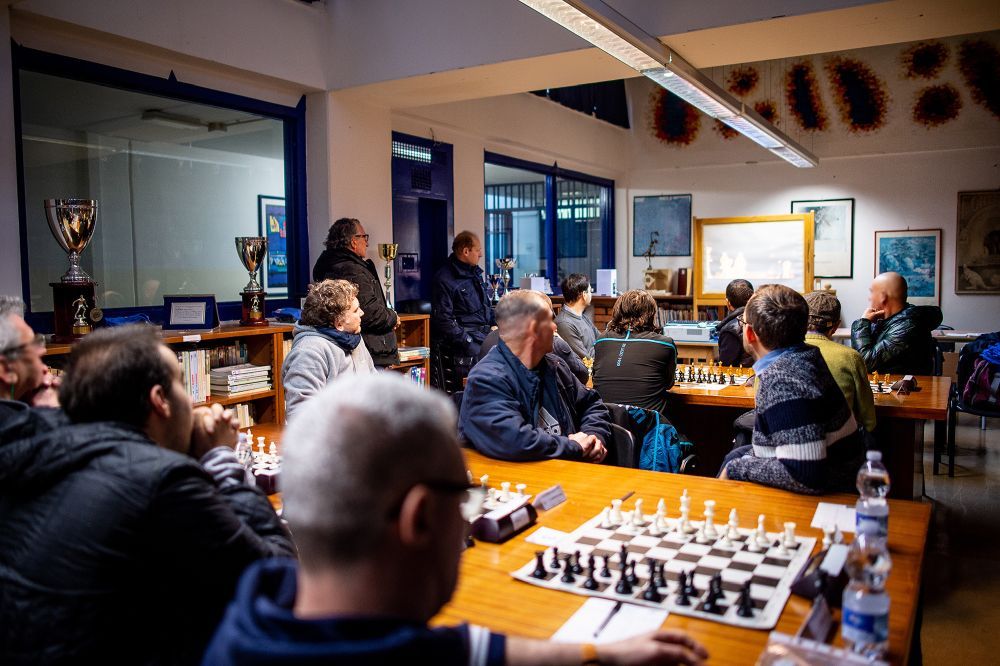 “I took part in the tournament to give the inmates the possibility to play chess experiencing something new and different from their daily routine. I had some prejudices and I was quite doubtful at the beginning, but when we started playing we were just players doing our best to win. There were no differences between inmates and free people, we were exactly the same in front of chessboards. It was a great and unforgettable experience for both!” says one of the players. During the tournament, all the players started chatting and having fun together in a very friendly and easy going atmosphere. At the end of the day, the inmates shared some Panettone (Panettone is an Italian type of sweet bread loaf) with the other players and they wished all the present Merry Christmas and Happy New Year. 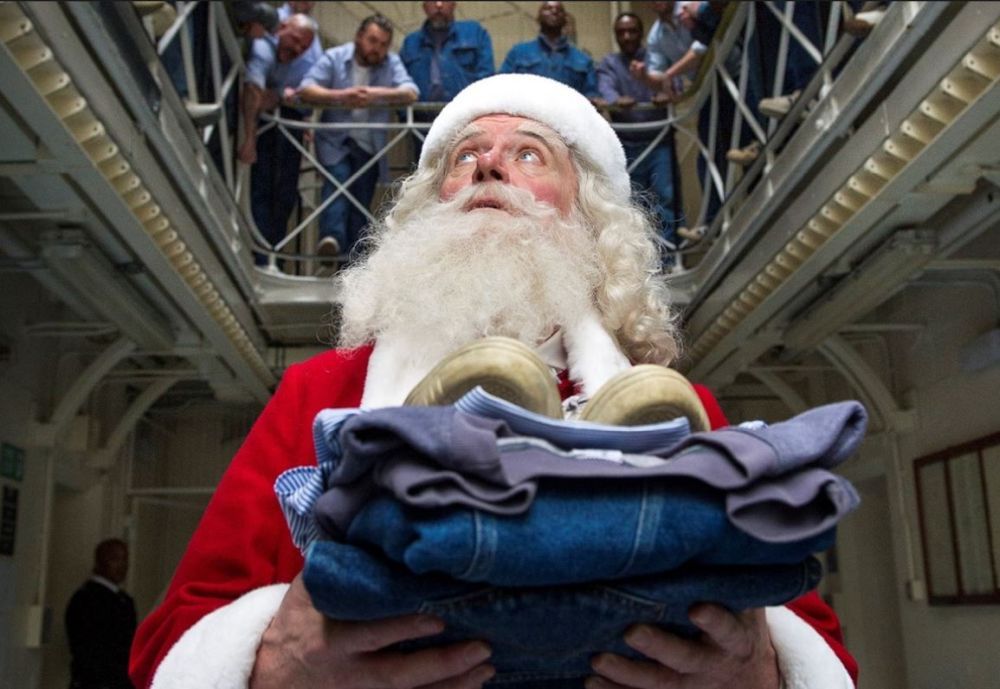 Christmas is a necessity. There has to be at least one day of the year to remind us that we’re here for something else besides ourselves. – Eric Sevareid | Photo: Dazed

The chess game has a very important role for inmates: it is not only a game or a hobby. Chess is a way to survive in jail, a way to find a better life style. An inmate says that his life is better than before thanks to chess. It helps not to think about the past mistakes.

I still remember my first day of chess class in 2015. I was terrified, it was a completely new experience and I was not sure to be ready to do it. I was worried to teach them something  harmful or wrong. I suddenly saw a man looking for some books in the jail library. He did not know about the chess class, but he asked me to be part of the group. I said yes. Since then, he has always played chess and I am happy to have done something good for him. 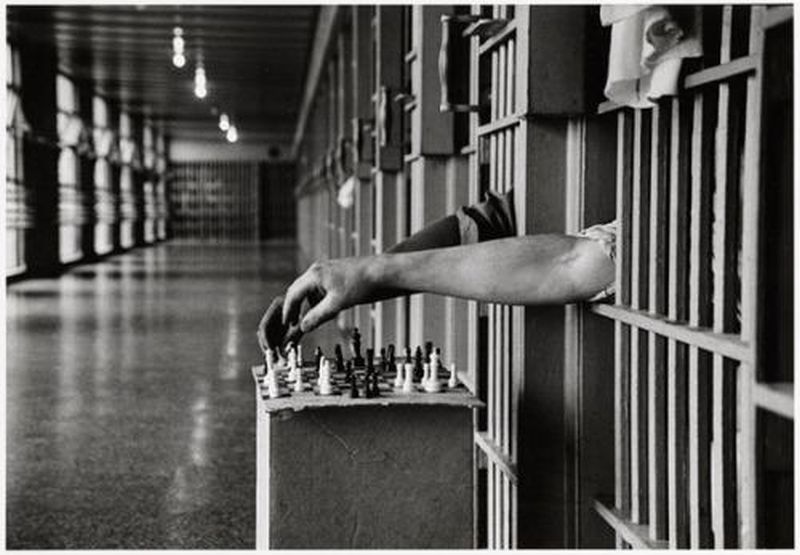 Some people cross your path and change your life forever| Photo: Reddit 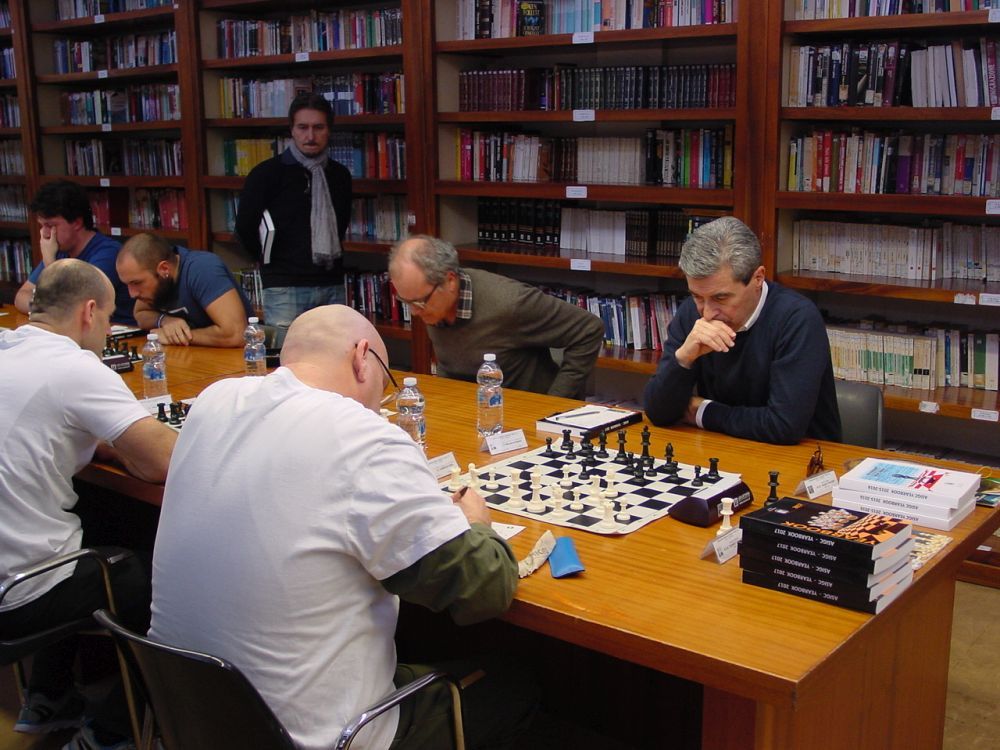 Born in Bologna (Italy) in 1990, I (Mirko Trasciatti) started playing chess when I was 13. After winning some youth tournaments, I won the UISP Italian Championship, cat. B in 2007 and the Umbria Championship in 2011. In 2011, I decided to become a chess instructor, so I got the national instructor title while in 2014 I obtained the Fide Instructor title. Since several years I have been working on many projects related to chess. Actually I’m a National Arbiter with four FA norms, member of a council of ASIGC (Italian Chess Association for Correspondence Players) and instructor specialized in youth and social sectors.