The International Chess Federation and Chess.com announce the FIDE Chess.com Women's Speed Chess Championship, an online competition to be held between May 28th and July 3rd. Unlike last year's Grand Prix format, this year it will be a knockout event among the final 16 players in the main event.

The first edition of the FIDE Chess.com Women's Speed Chess Championship was held in summer 2020, right in the midst of COVID-19 pandemic. With participants like Hou Yifan, Ju Wenjun, Anna Ushenina, Valentina Gunina, Alexandra Kosteniuk, Kateryna Lagno and others the event was a big success both among audience and participants. 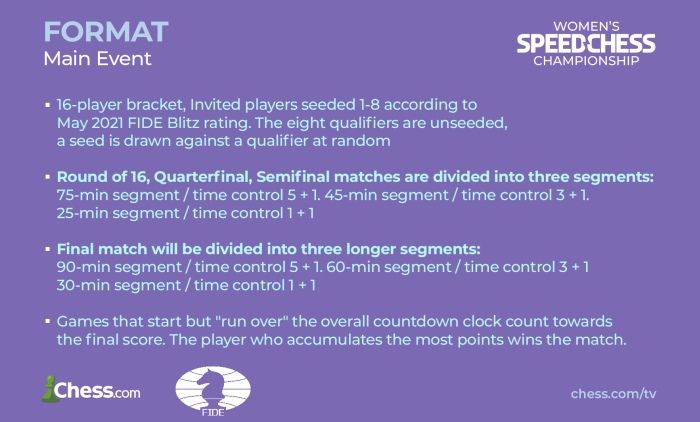 The first stage will comprise a total of eight Swiss tournaments open to any titled women player (WCM/WFM/WIM/WGM/CM/FM/IM/GM). Organizers expect to have participants from around 100 countries. One player from each playoff qualifier will move on to the main event.

The main event of the FIDE Chess.com Women's Speed Chess Championship will consist of a 16-player bracket, one match per day. Eight players will be invited directly to the knockout bracket, while a qualification system will determine the eight remaining spots.

In the 16-player brackets players will face each other under three different time controls – rapid, blitz and bullet. The closer they will be getting to the end of their matches, the less time they will have to make decisions – the more thrilling the games will become. 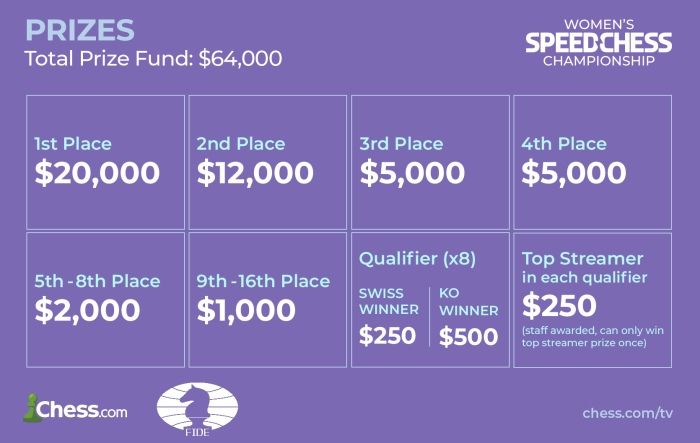 The FIDE Chess.com Women's Speed Chess Championship features one of the biggest prize pools in the history of online women’s chess tournaments. $58,000 will be allocated to the main event with $20,000 going to the winner and $12,000 to the runner-up. The total prize fund of the event is $64,000.

All the games from the FIDE Chess.com Women's Speed Chess Championship will be broadcast live with multilingual expert commentary on Chess.com/TV and Chess.com's Twitch channel. Fans will also be able to enjoy the event through Chess.com's Events page.

All the information about the Championship can be found here.