Dibyendu Barua wins Paritosh Bhattacharyya Memorial All Bengal Open Rapid Chess Tournament 2018. The maestro organized the event for the family of Late Paritosh Bhattacharyya to raise funds. All cash prize winners donated their prize money and many other people donated through various methods. Sandipan Chanda whose first coach was Paritosh, flew from Harika's wedding ceremony in Hyderabad to support the family of his first coach. Diptayan Ghosh, Saptarshi RoyChowdhury, Neeraj Kumar Mishra, Sayantan Das, Somak Palit played the tournament in his honor. Neelotpal Das was also there despite not playing the tournament to show his support. 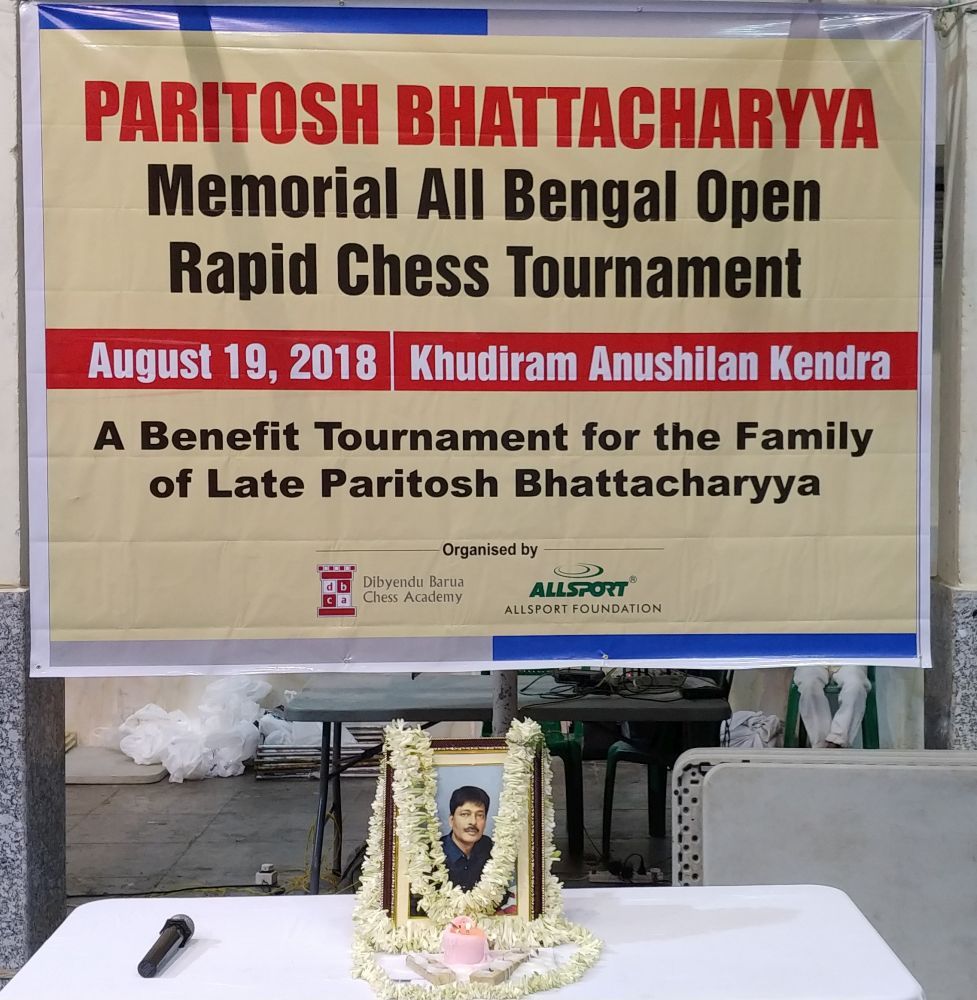 Dibyendu Barua organized a one-day all Bengal rapid tournament to raise funds for the family of Late Paritosh Bhattacharyya who has worked for his academy for more than 12 years. The tournament was supported by top players of West Bengal and India. Sandipan Chanda who was attending Harika's wedding at Hyderabad, flew back to Kolkata only for this reason. Neelotpal Das did not play the tournament, still he was there to support. Neeraj Kumar Mishra made his way to Kolkata only for this reason. 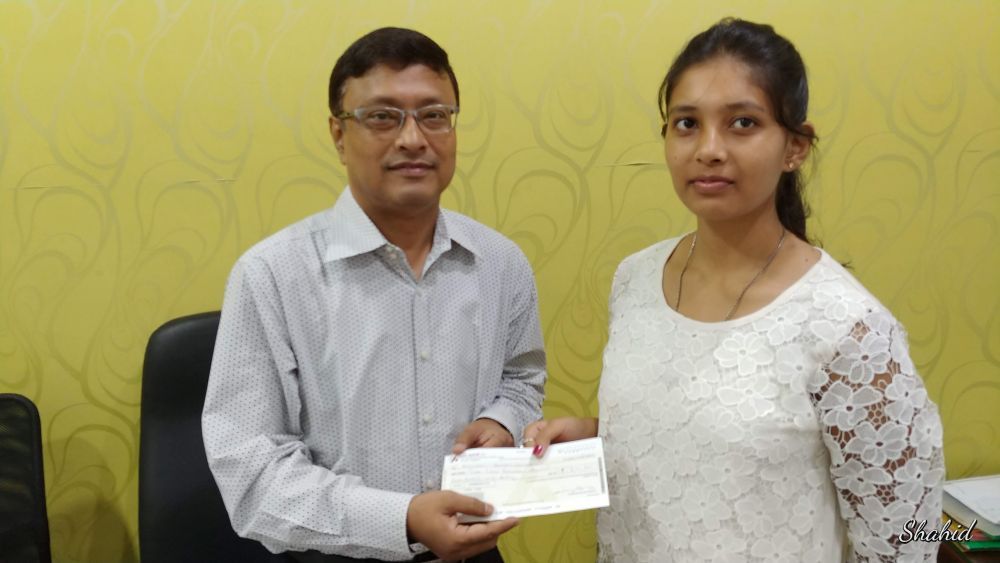 Dibyendu Barua hands over the cheque of ₹214201 (2 lacs fourteen thousand and two hundred one rupees) amount collected from all donations to Poulami Bhattacharyya, daughter of Late Paritosh Bhattacharyya 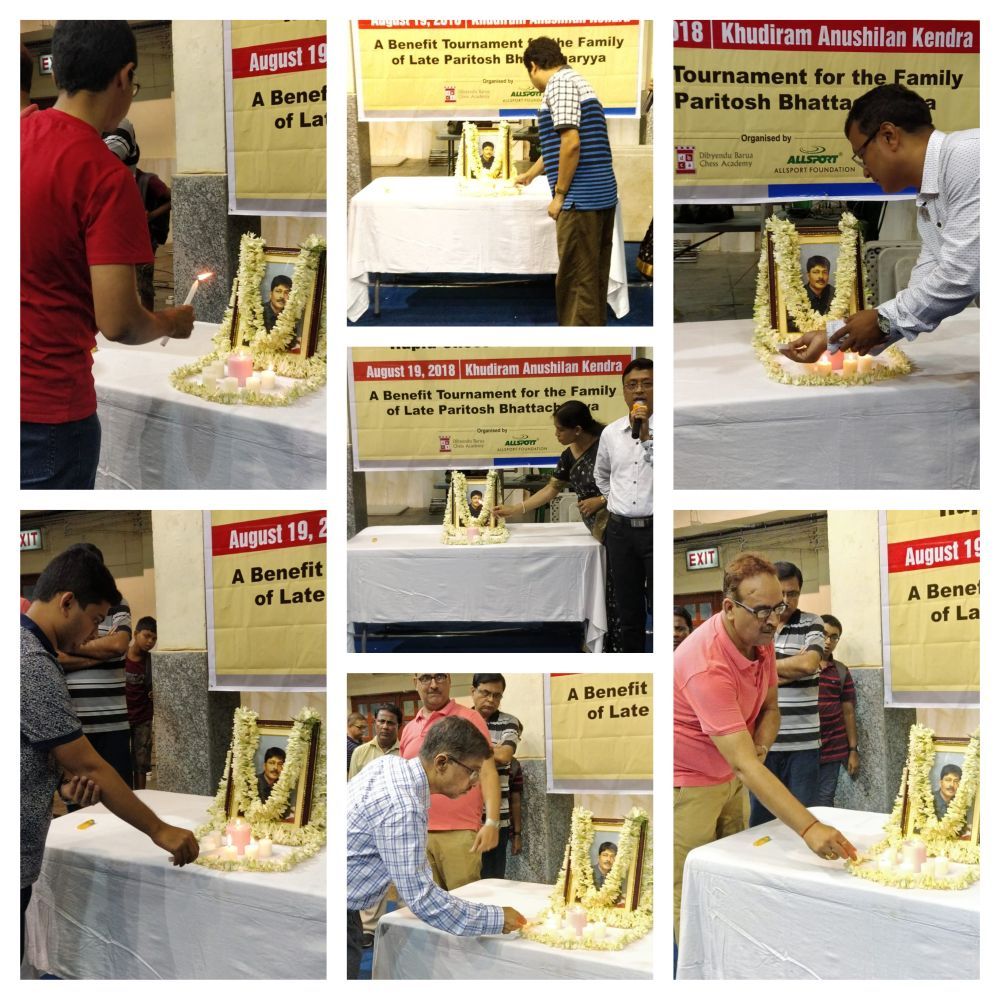 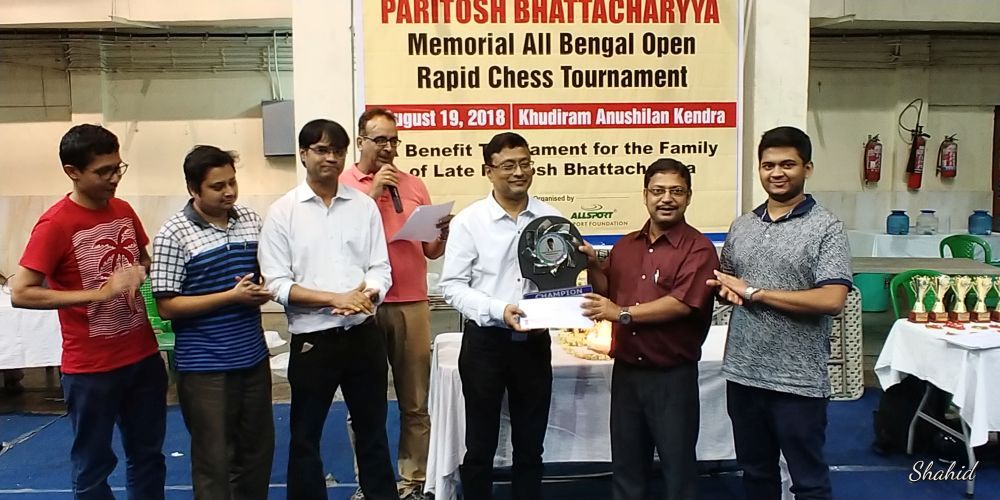 Dibyendu Barua scored 6.5/7, receives the first prize, however he donated the entire cash amount to the family of Late Paritosh Bhattacharyya 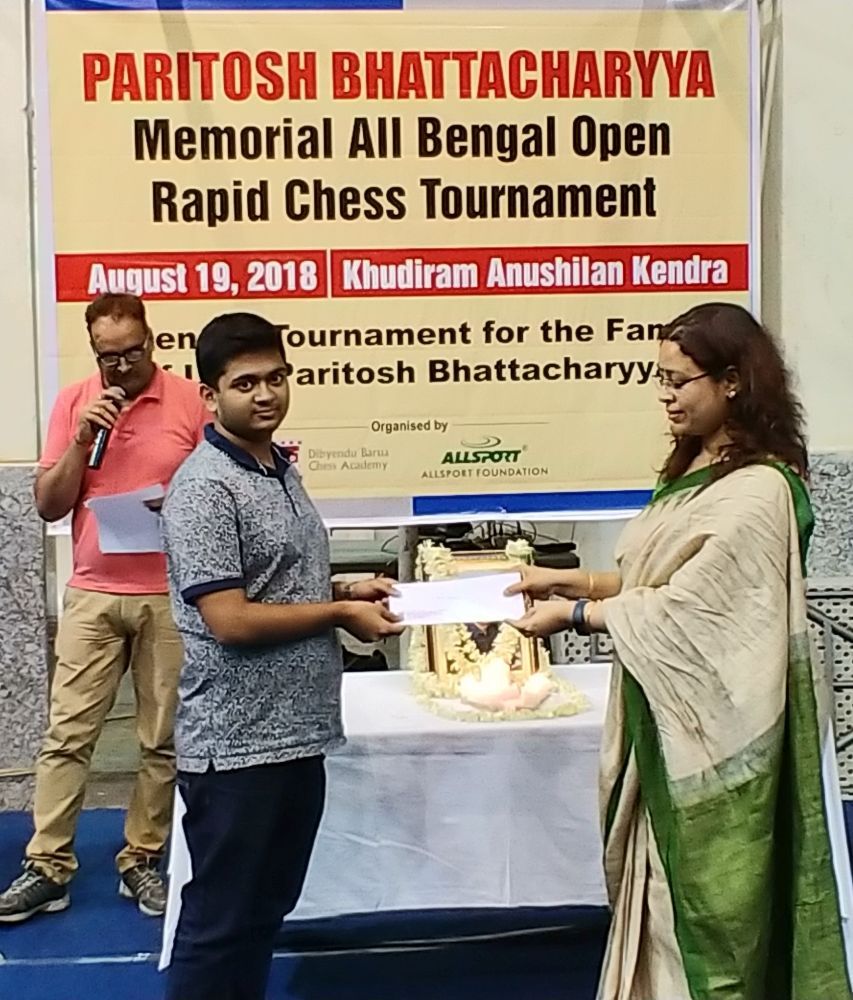 There was a four-way tie at the first position. Diptayan Ghosh also scored 6.5/7 and he secured 2nd position based on tie-break score 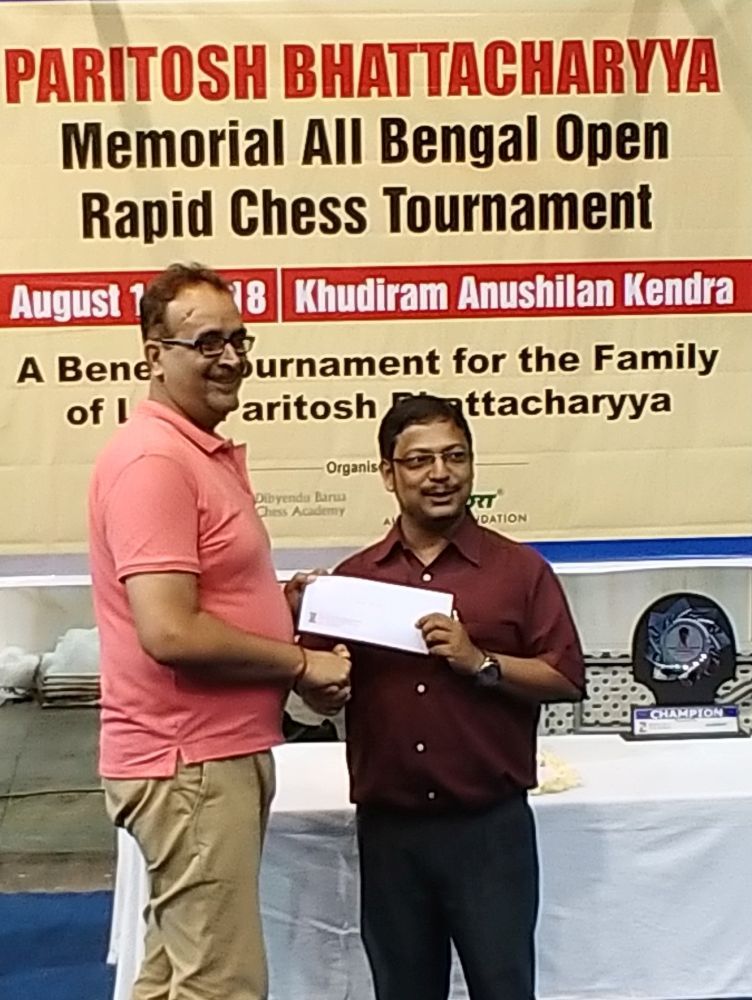 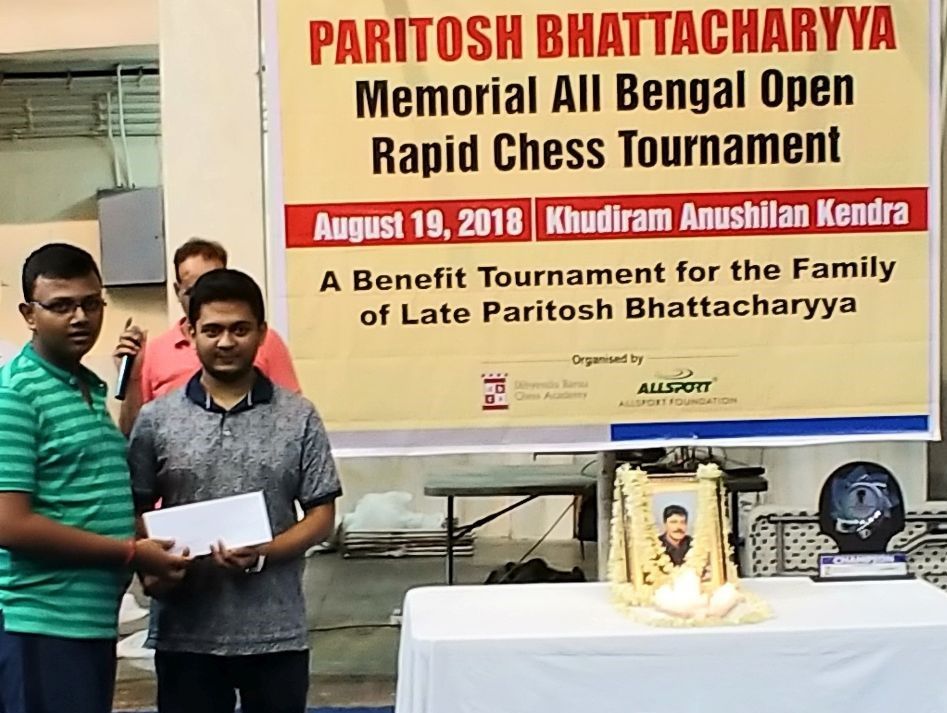 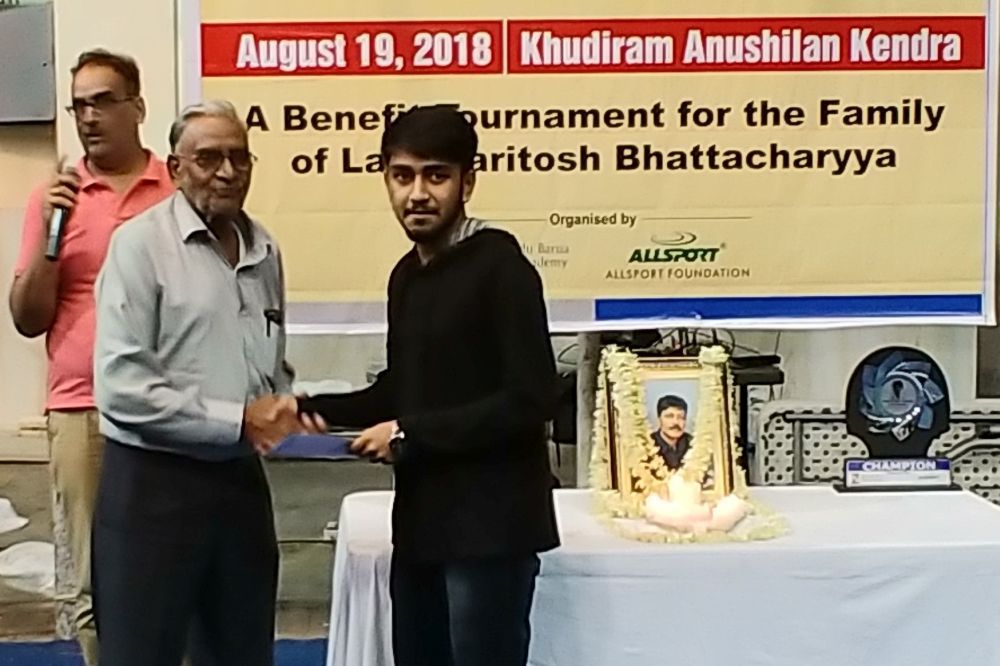 Anustoop Biswas scored 6.0/7 and he was declared joint 5th with... 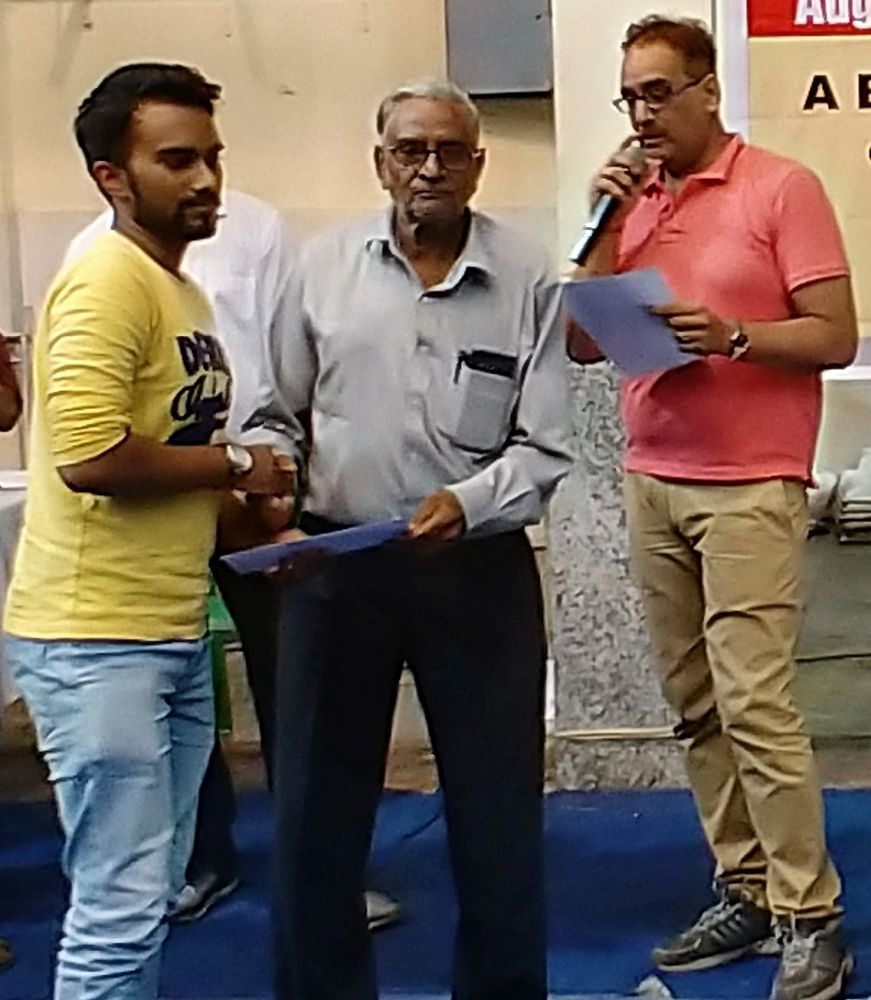 ...Suvradeepta Das who also scored 6.0/7 and their tie-break score was same Arpita Mukherjee secured 7th position due to a better tie-break score by scoring 5.5/7 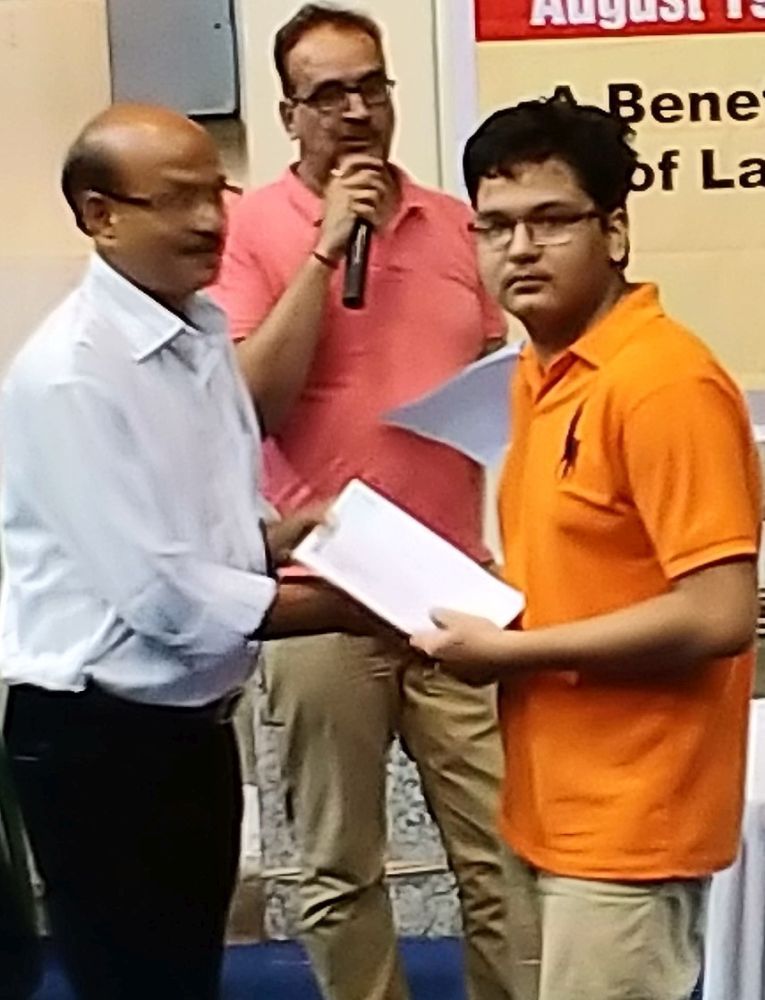 Rajdeep Sarkar was placed 8th with a score of 5.5/7 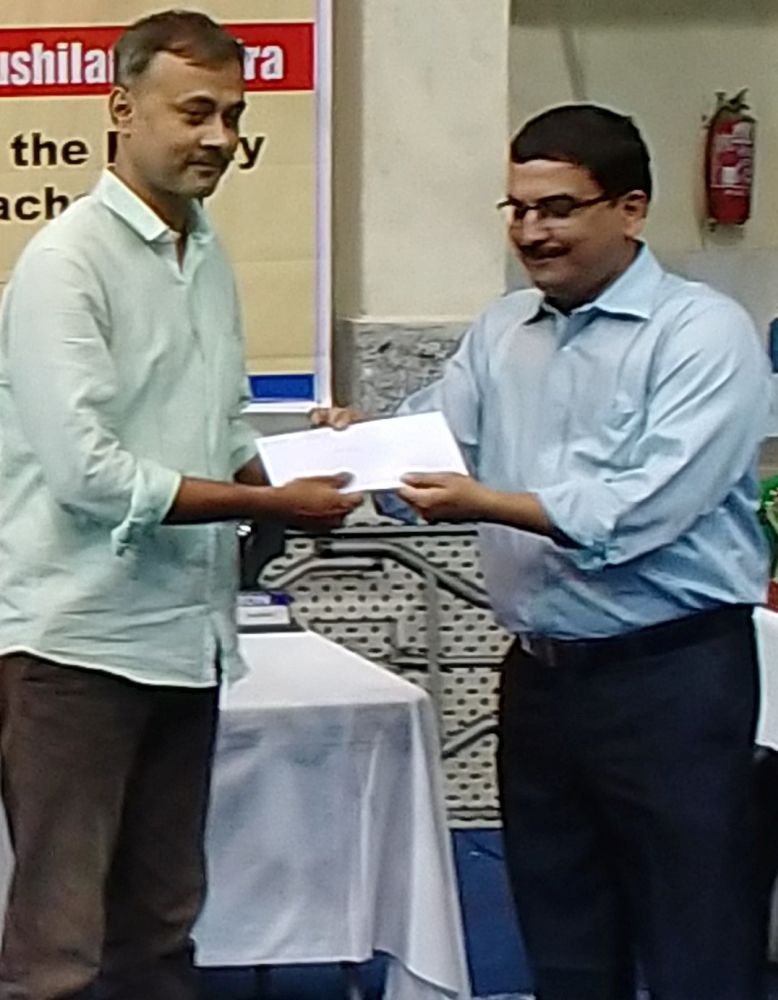 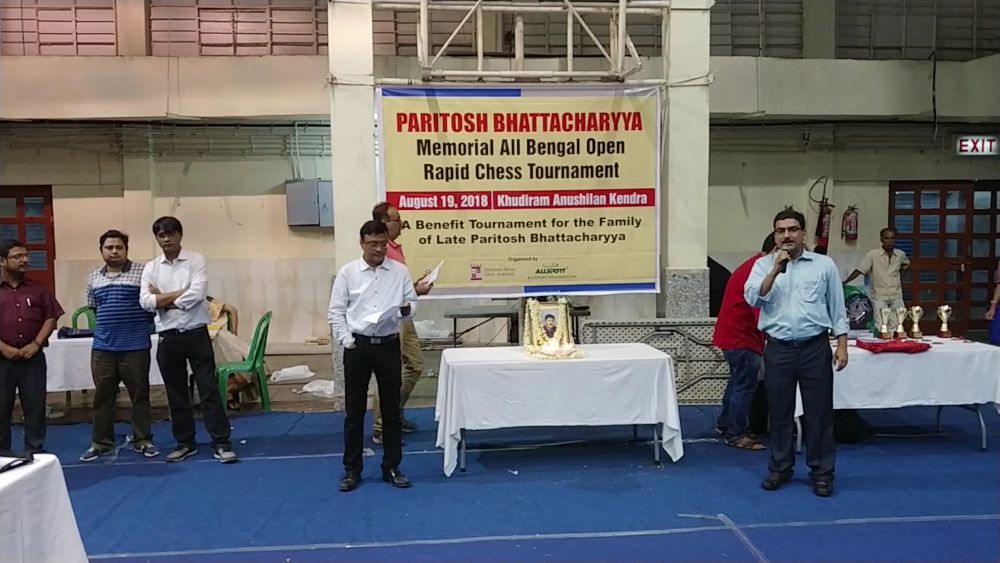 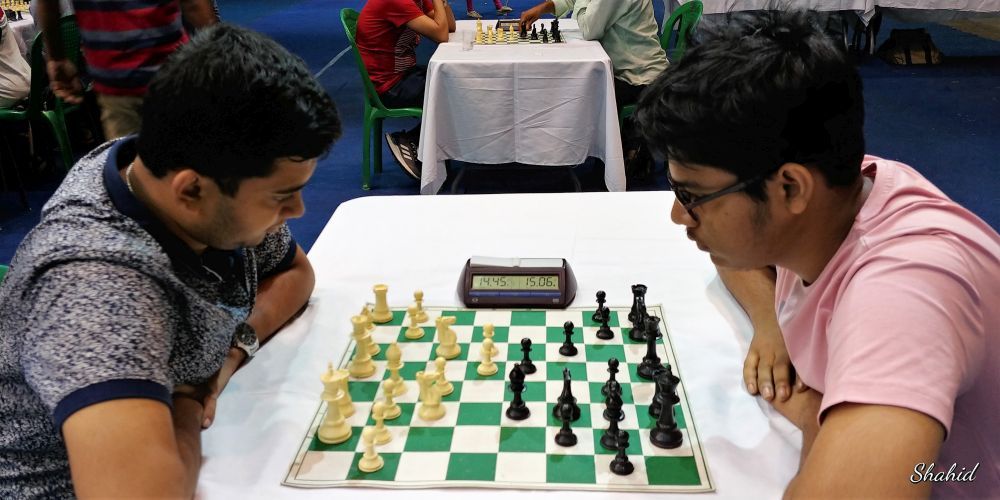 Aronyak Ghosh might have gone down against soft spoken powerhouse Diptayan Ghosh, but he won a tournament within six days after this battle 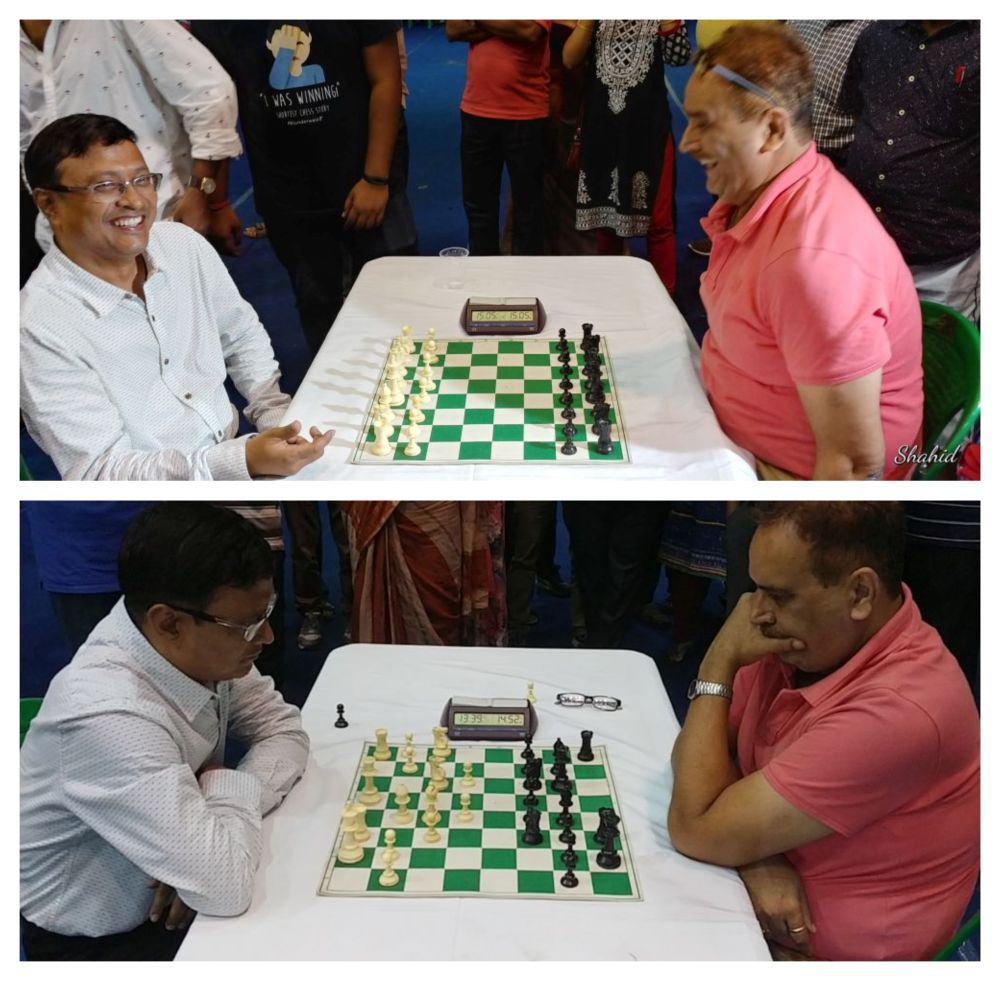 Childhood friends share a good laugh before the match, but when the clock starts ticking, game face is on 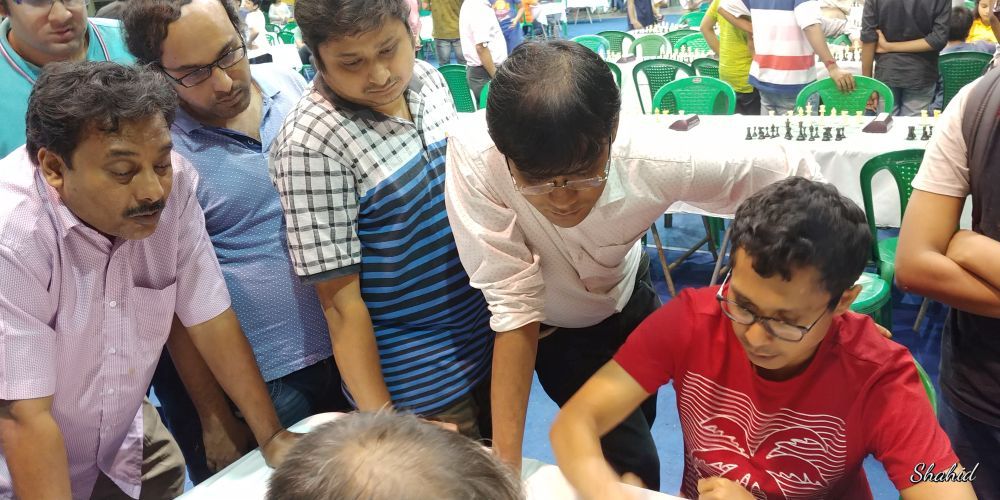 Can you identify the all strong titled players of Kolkata here? 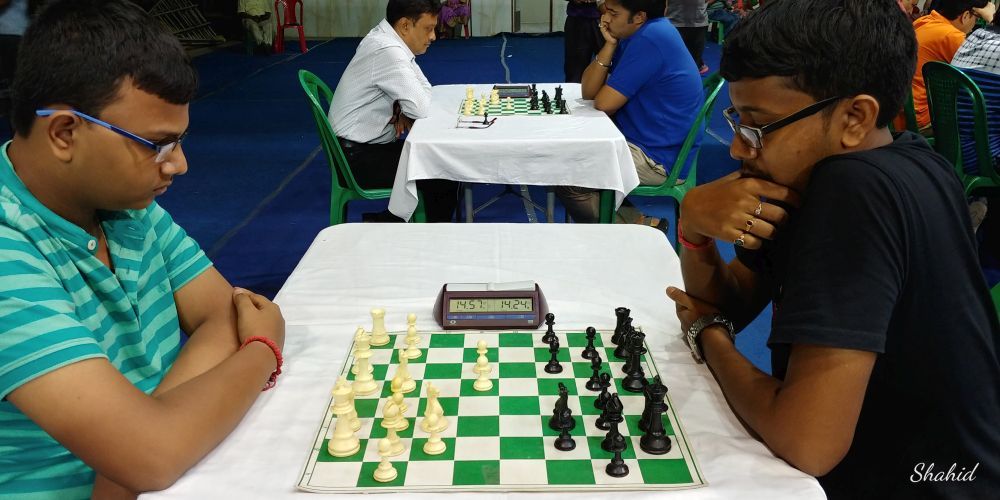 Who is going to be the next GM from Kolkata? Stats favor Sayantan whereas Mitrabha has the momentum 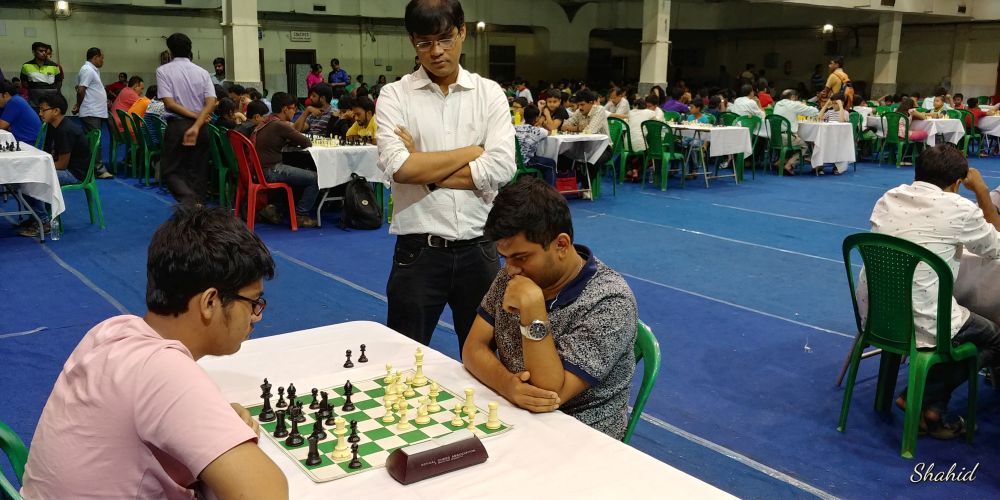