The Catalan circuit in Barcelona, Spain, is one of the most favored international destinations for chess players all around the world. The reason? You can stay in one place and play more than five tournaments in two months! It is extremely cost effective and you get to face strong players from different countries. This year the Catalan circuit begins from the 25th of June. ChessBase India helps you plan your entire trip and we have also introduce the new feature of a group tour where ten individuals will have a personalised guide to assist them! IM Sagar Shah also narrates his experience of playing the Catalan circuit in 2014.

Towards the end of 2013 I had reached a rating of 2378 with two IM norms. I was going to play three International events in India - Chennai, Hyderabad and Kolkata. Three opportunities to get my final norm and I was just 22 points away from the coveted IM title. It was going to be quite easy, I said to myself. Besides, I was thoroughly motivated to become an IM before my marriage which was scheduled on the 5th of February 2014. The three tournaments turned out to be a heart breaking experience. I bled rating like anything and I was pushed down to 2304. Of course, I didn't achieve my final norm. I had a dream of becoming an IM before marriage, but it had to wait! 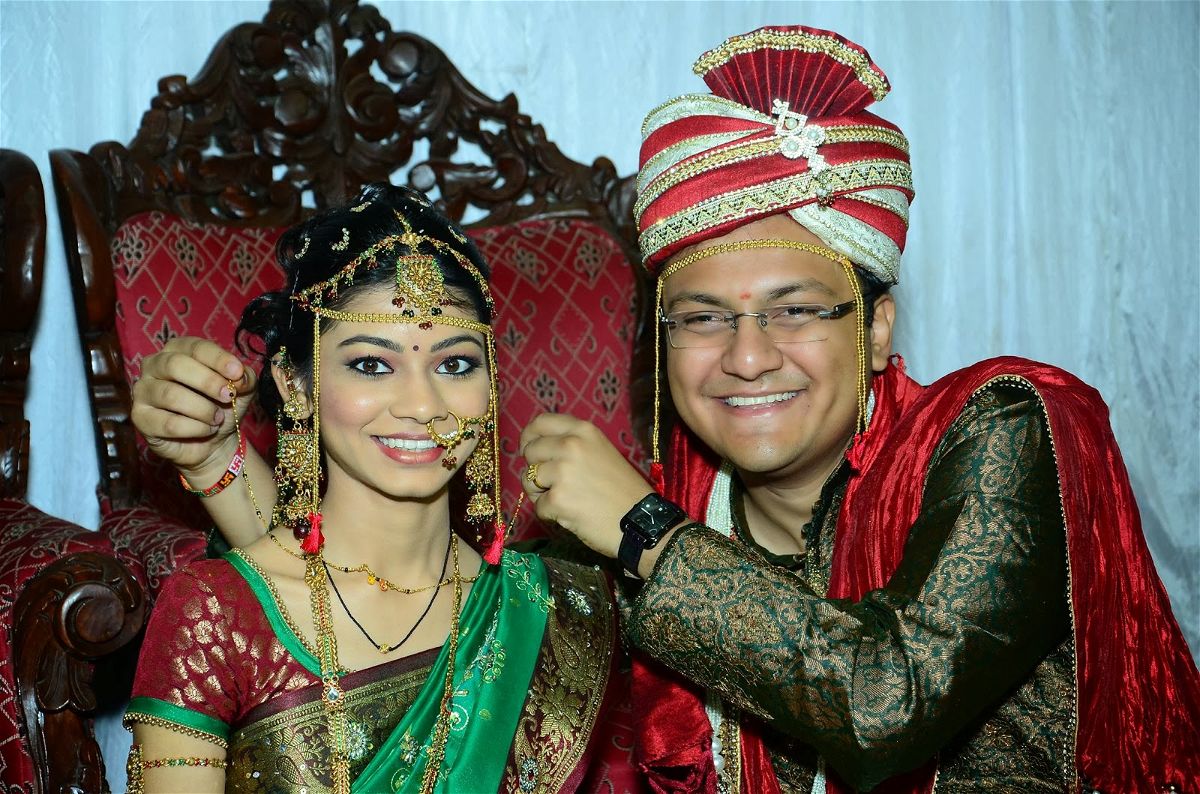 I kept my mental balance, and didn't call off the wedding! Amruta was also fine to marry an untitled player. So it all went ahead as planned!

One of the biggest advantages for Amruta and me after our marriage was that we could travel together. As of today, it has been four years since we got married and our European trips have grown in number of days and also in complexity. We have visited nearly 25 countries since marriage. Our trips started to become all the more complex in terms of the flight connections, looking for cheap accommodation, one year after the other as we became more confident about the European terrain! But as newbies in 2014, we both agreed that the Catalan circuit seemed like the most ideal one for both of us! There were a lot of upsides of playing in Barcelona, Spain:

Four/five tournaments in a row:

The biggest advantage of playing in the Catalan circuit was that you get to play five tournaments in a row. Amruta and I chose to play four, as we took a break after three events, but for the ones who are enthusiastic and have loads of energy, can aim for five or even six!

The most boring part for chess players is to pack their bags after every tournament and move to the next location. Playing in Catalan Circuit helps you avoid that because all the events are in the same city. So you can have a central place to stay and travel to each of these tournaments without having to change your accommodation.

One round a day:

The city of Barcelona is one which people visit as a part of their vacations. We as chess players are lucky that we get to stay in the city for more than a month to do something more meaningful (playing chess) than just sight seeing!

A peek into my Catalan trip in 2014 through pictures: 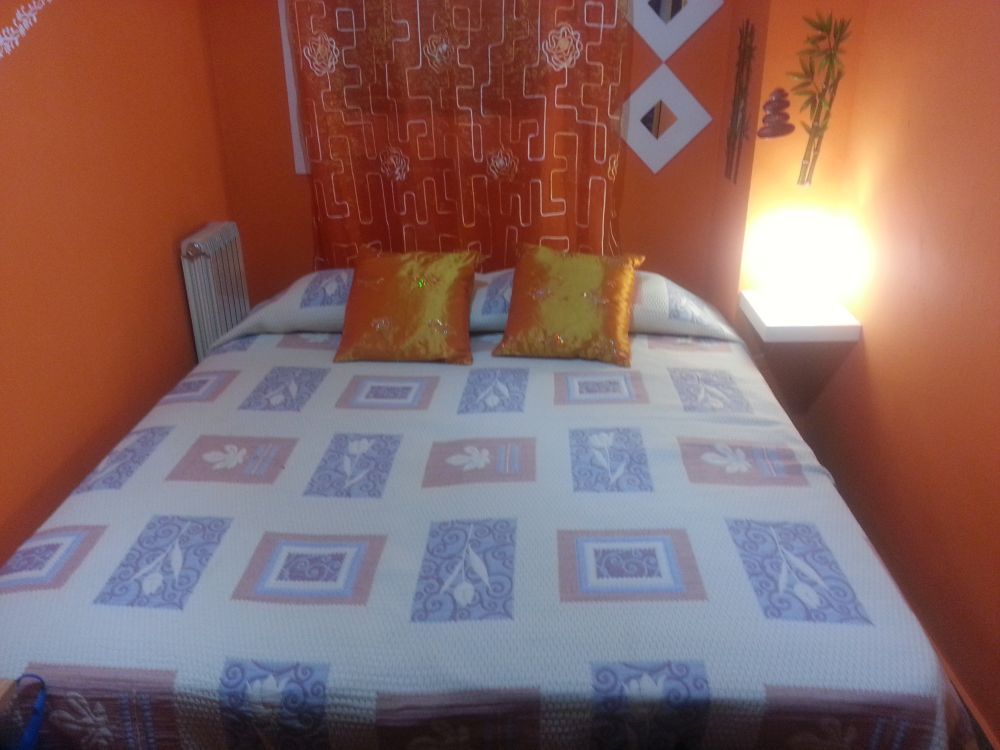 This little room in a shared apartment became our home for the next 52 days! At first it was really small, but humans have a habit to get accustomed to things! 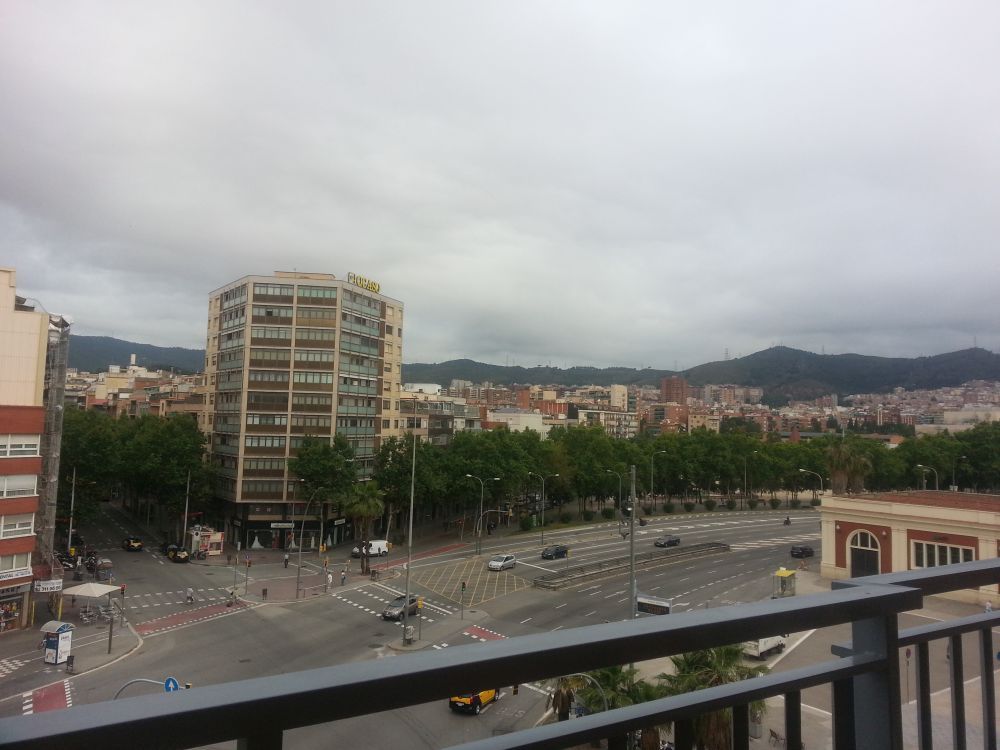 The beautiful view from the apartment! 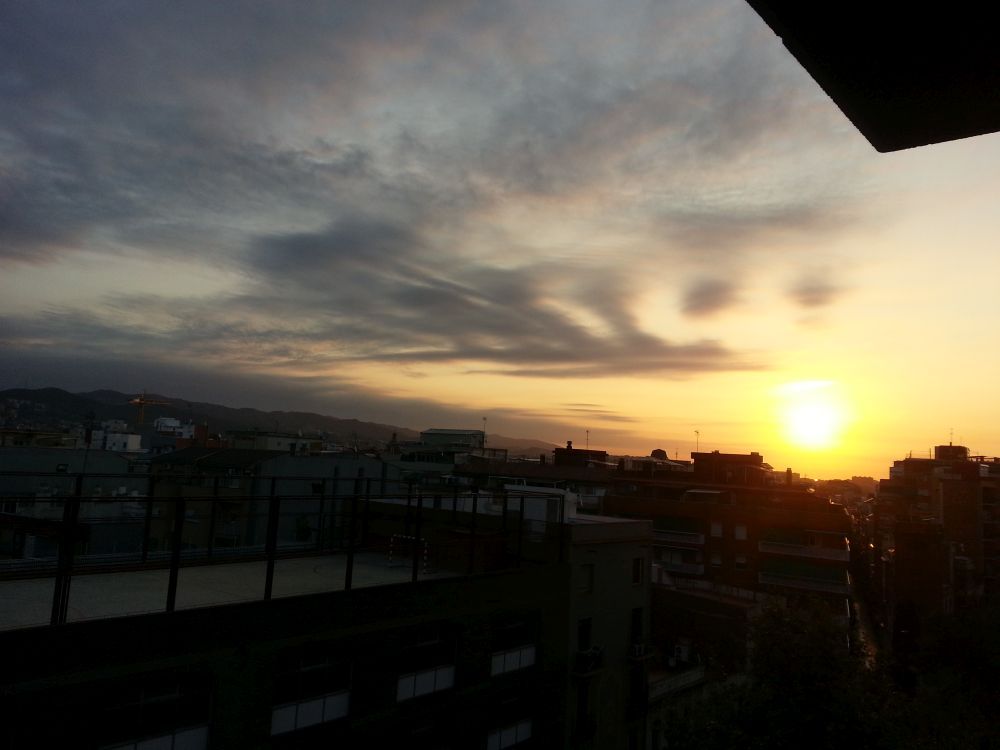 Sunset in Barcelona is spectacular! 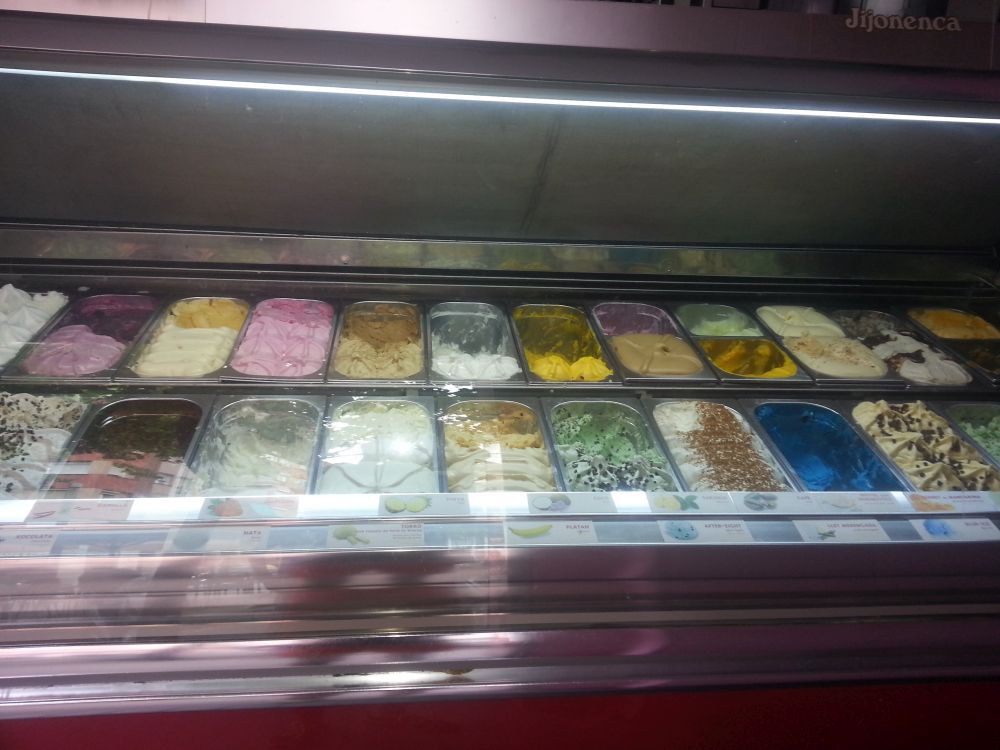 One thing we must let you know - ice creams in Barcelona are spectacular. But you shouldn't be eating too many of them! Healthy food is essential for a long 50-day trip... 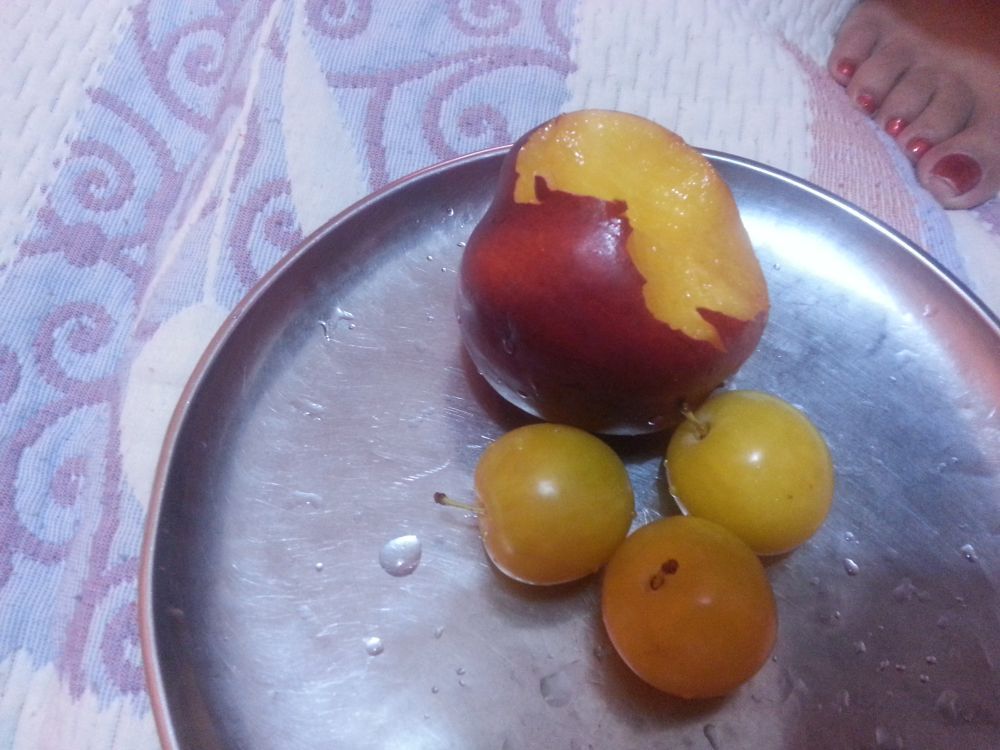 ...And so we recommend fresh fruits! In Barcelona you find some wonderful fruits at a reasonable price. My personal favourite was the Nectarin which is a synthesis of plum and peach and a fruit that you do not find in India. 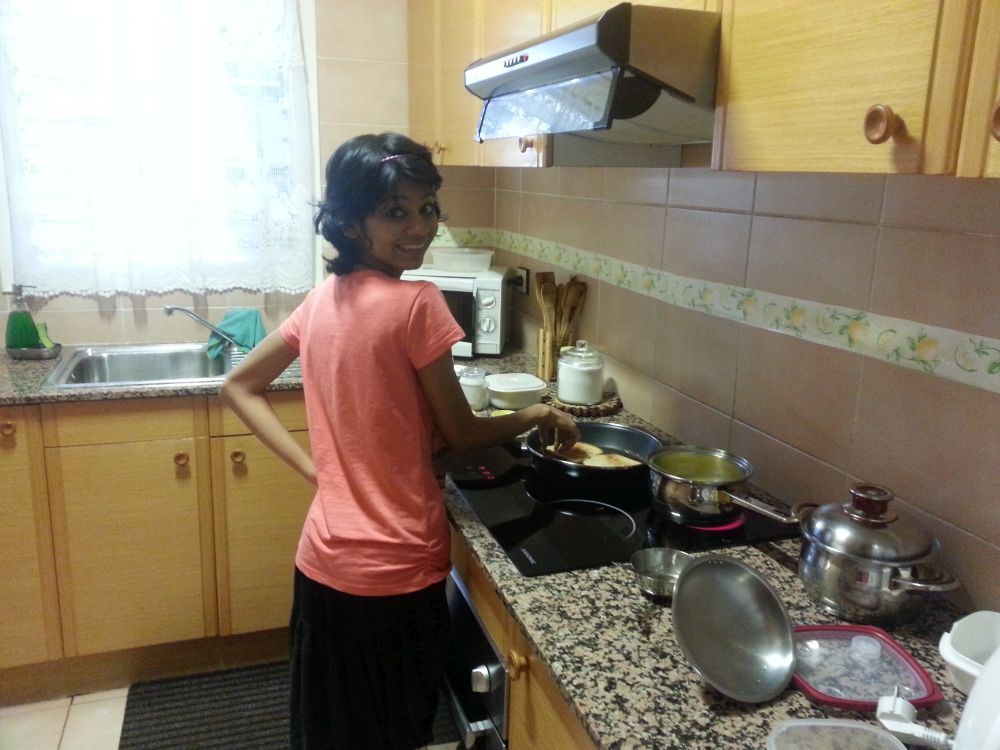 The kitchen gave us the freedom to cook whatever we wanted to.... 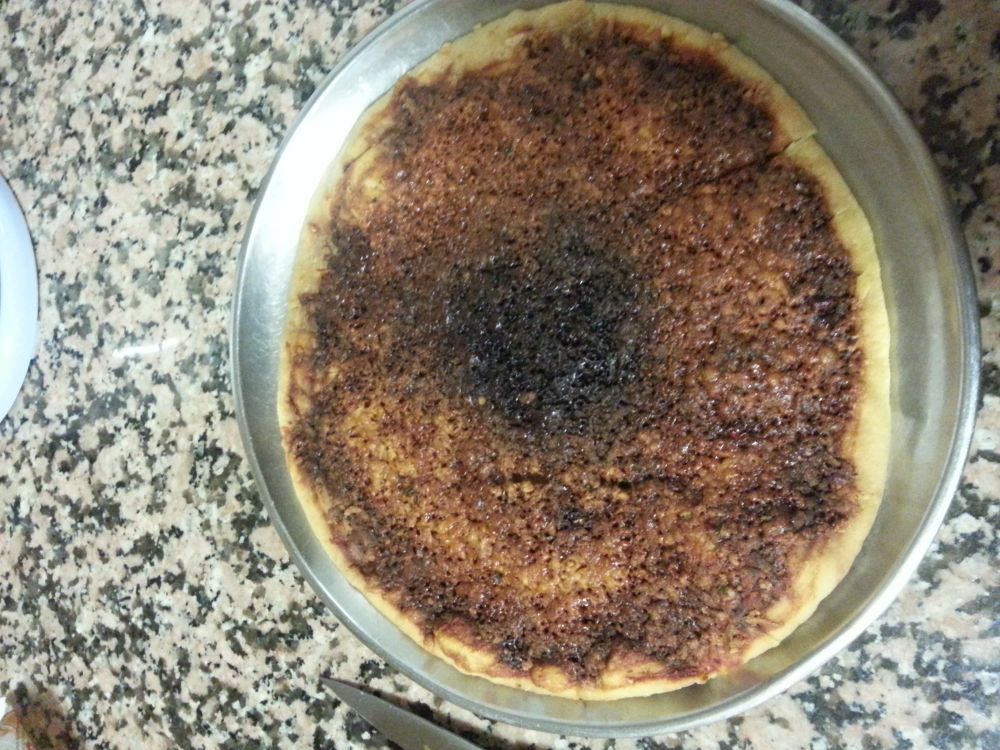 A lot of freedom! 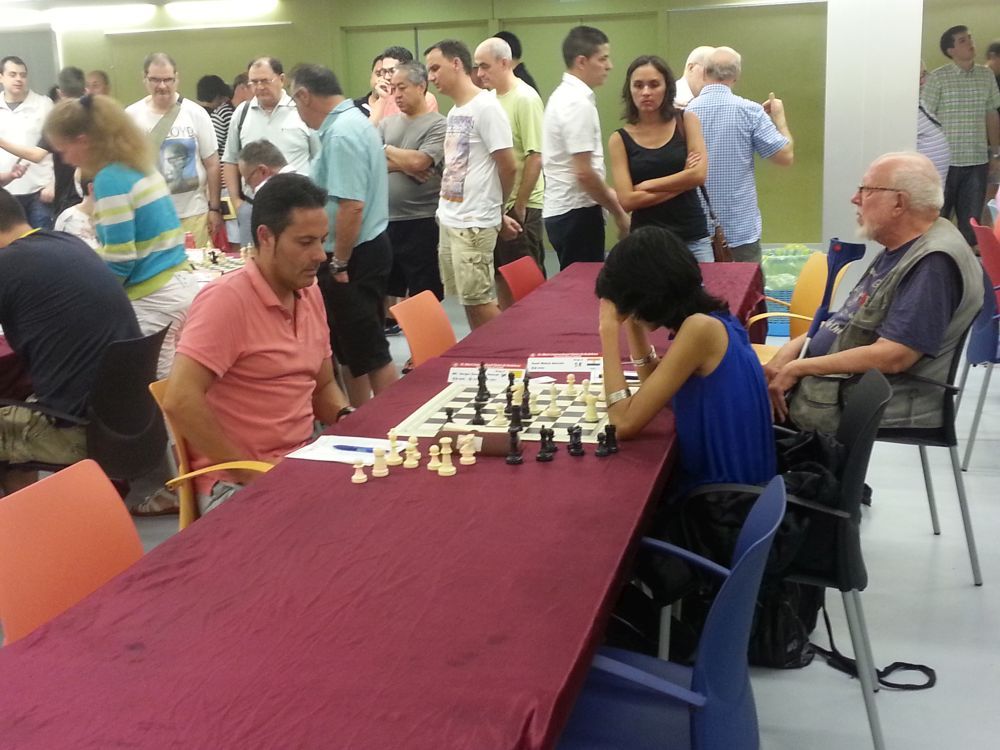 Of course, kitchen was not the place where Amruta belonged! 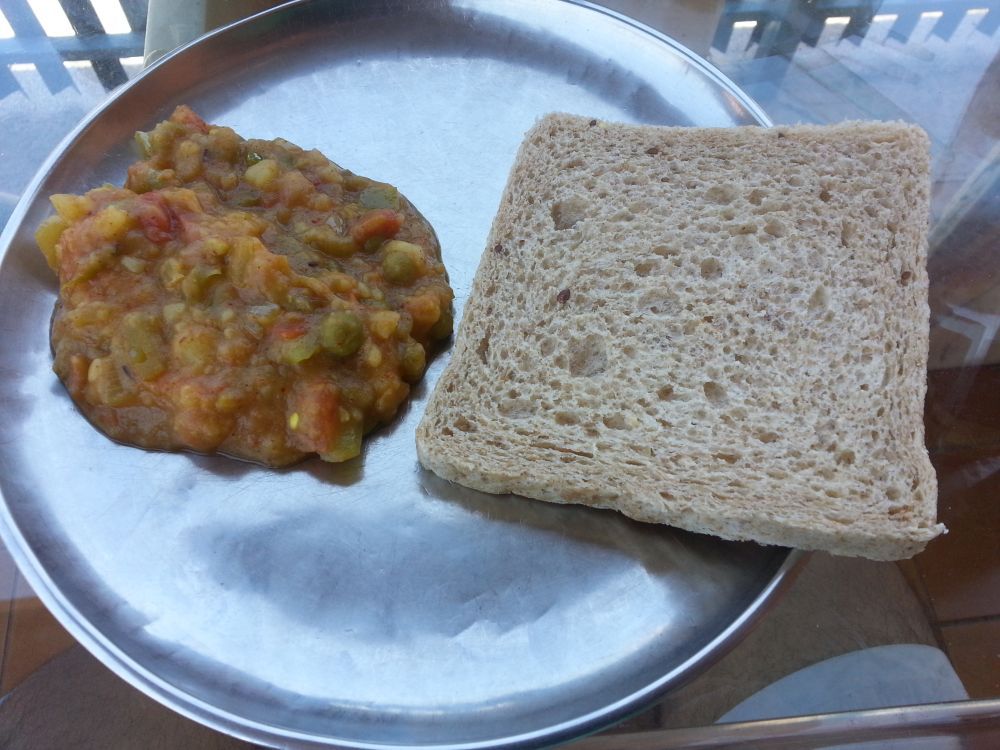 Bread and vegetable became our staple diet in the first few days! 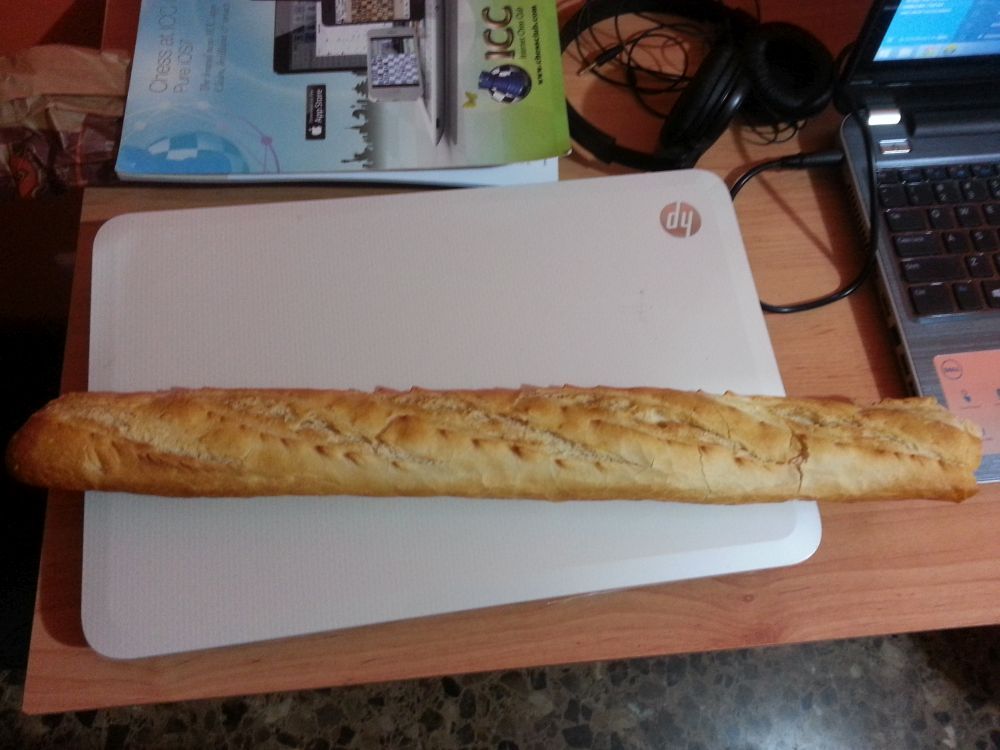 That's when we discovered the Pan bread! A local variety. If you got to a shop ask them for freshly made ones, you get hot ones that break into your mouth and dissolve with ease! They cost something like half a euro, and is a perfect replacement for Roti! 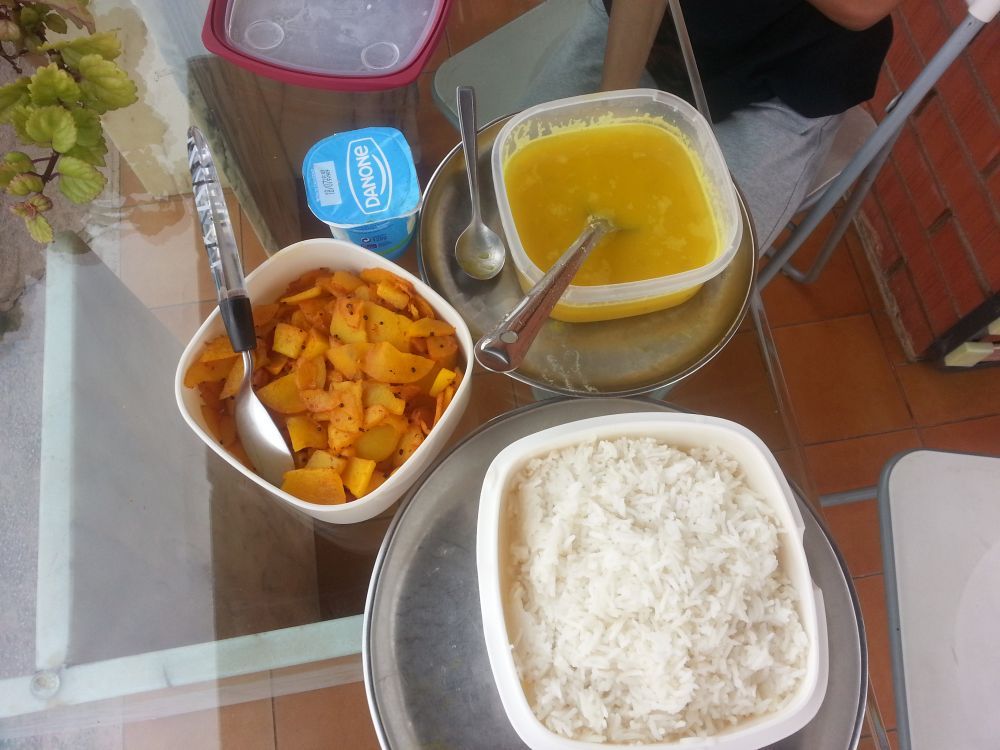 Soon we graduated to much better food! 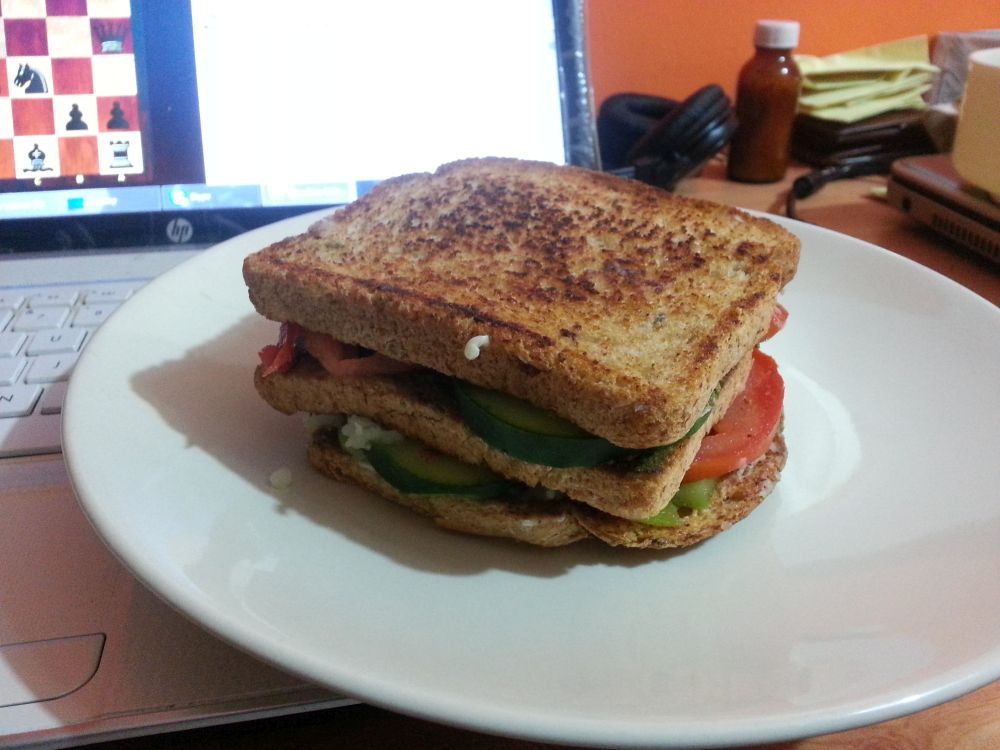 You always have the triple decker sandwich when you are bored to cook! 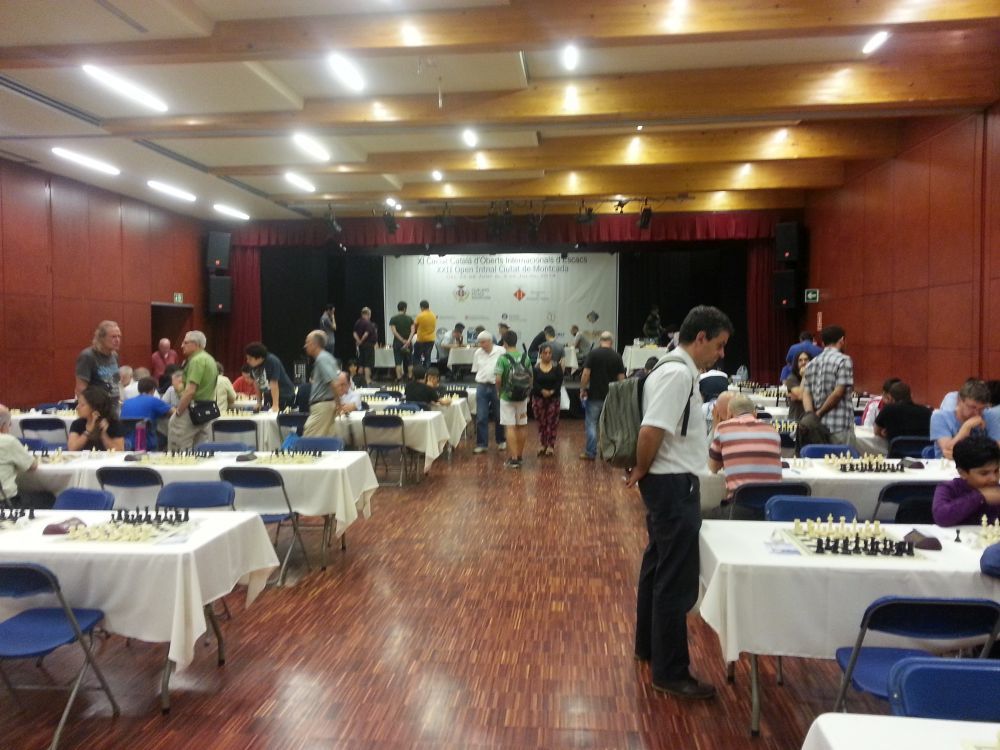 The playing halls at all the events are very nice. The one above is the first tournament in Montcada. 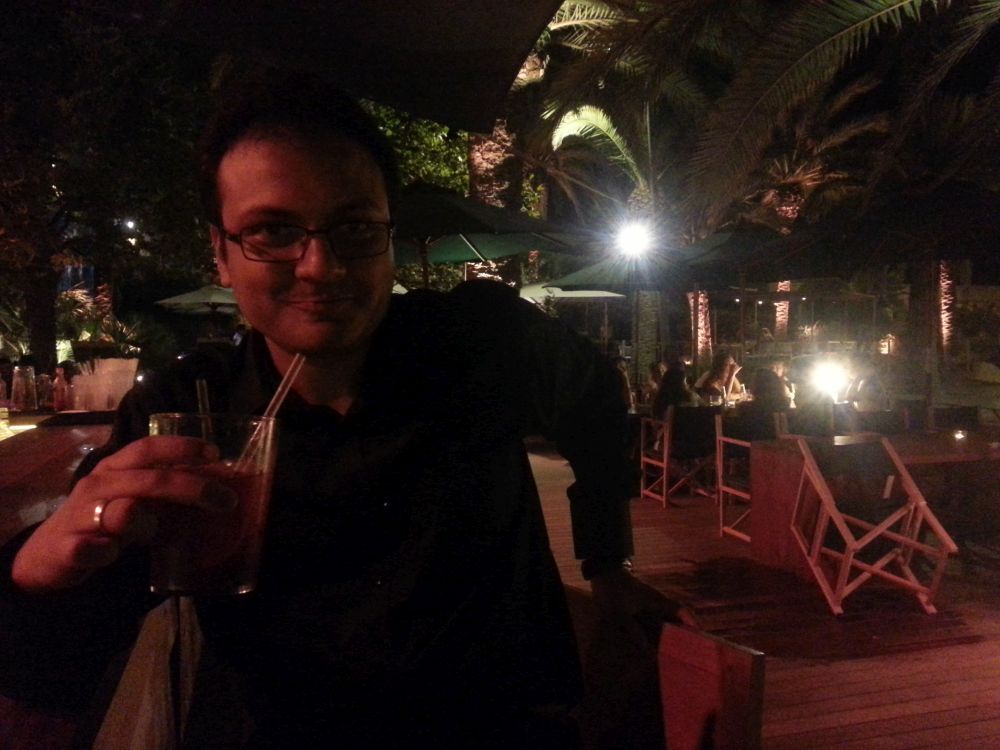 If you are in Barcelona, do try out the Sangria, which is a famous drink in Spain, especially Barcelona! This picture above was one of our only night outs in the 52 day trip! (Yes, we were focused!)

Our focus was at an entirely different level in the Catalan trip. Everything worked like clockwork. We would wake up, have breakfast, prepare for the game, cook and eat our lunch, take some rest before the game and then leave for the round which would begin at 5 p.m. After coming back we would eat our dinner (most of the times it would be the lunch that was cooked in the morning), analyze our games and go to sleep! I must say that this holistic approach helped us tremendously. Amruta gained rating and so did I. In three events itself I got my norm and also crossed 2400 Elo (remember I was 2304!) to become an IM! (After I became an IM, I wrote a post on my blog thanking all the people who helped me become an IM).

When Amruta and I decided to travel to Barcelona in 2014 we tried to find out information about the best place to live, what is the best way to travel, which are best tournaments, what should be our budget. But believe me, there was very little help that we could find. We planned it all on our own. Somehow, chess players travel all the time, but how they do it is always a well guarded secret. All that we hoped during those months of planning in 2014 was someone to tell us that this is the right way things have to be done, someone to guide us. So that we would save time in planning and could actually focus on preparing the Grunfeld or the Kan! Today after four years, I am happy to say that what we lacked back in 2014, we are trying to provide through ChessBase India.

The tournaments that ChessBase India Power will help you plan in the Catalan circuit 2018 are:

As you can see, each tournament is one after the other without any break. As there is only one round a day this is quite feasible to play without losing all your stamina! Yet, Amruta and I decided to skip the fourth event - Sitges Open and took a nine day break. Well, nothing like a few days off to analyze your 27 games, find the errors and get ready for the next tournaments. Also you get to see the beautiful town of Barcelona. Something which must not be missed! The fourth event - Sitges is also a little father away from the rest of the tournaments. It takes roughly around 1-1.30 hours by train to reach the tournament. And if you do shift your base for the Sitges tournament, things become a tad expensive. So we gave that event a skip, but I remember our friends Akshat Khamparia and Somak Palit travelling everyday and performing quite admirably and finishing in top three! Train travel in Barcelona is quite comfortable.

You would also have noticed that after the fifth event in Badalona, there is a gap on 8 days. There is an event in Sant Adria De Besos from the 10-16 of August, but it is not of the same quality as the above six events. The Sants Open from the 17th is extremely famous with many big names playing it. For Amruta and me our trip included four events: Montcada, Barbera, Sant Marti and Badalona.

This is where these six places stand on a map:

4. Entry for the tournaments

6. Not to forget, Ankit is a capable chess player and can throw in a novelty or two for your preparation!

He would be doing everything that a guardian does! In this way, parents who usually have to travel with their kids will be saved from spending nearly two months in Spain, away from their work, while the kids will be taken perfect care of! Also it is cost effective. Only the first 10 applicants will be a part of the ChessBase India Power Tour. Of course, the rest can do all the bookings with us but you won't receive personal attention from Ankit. 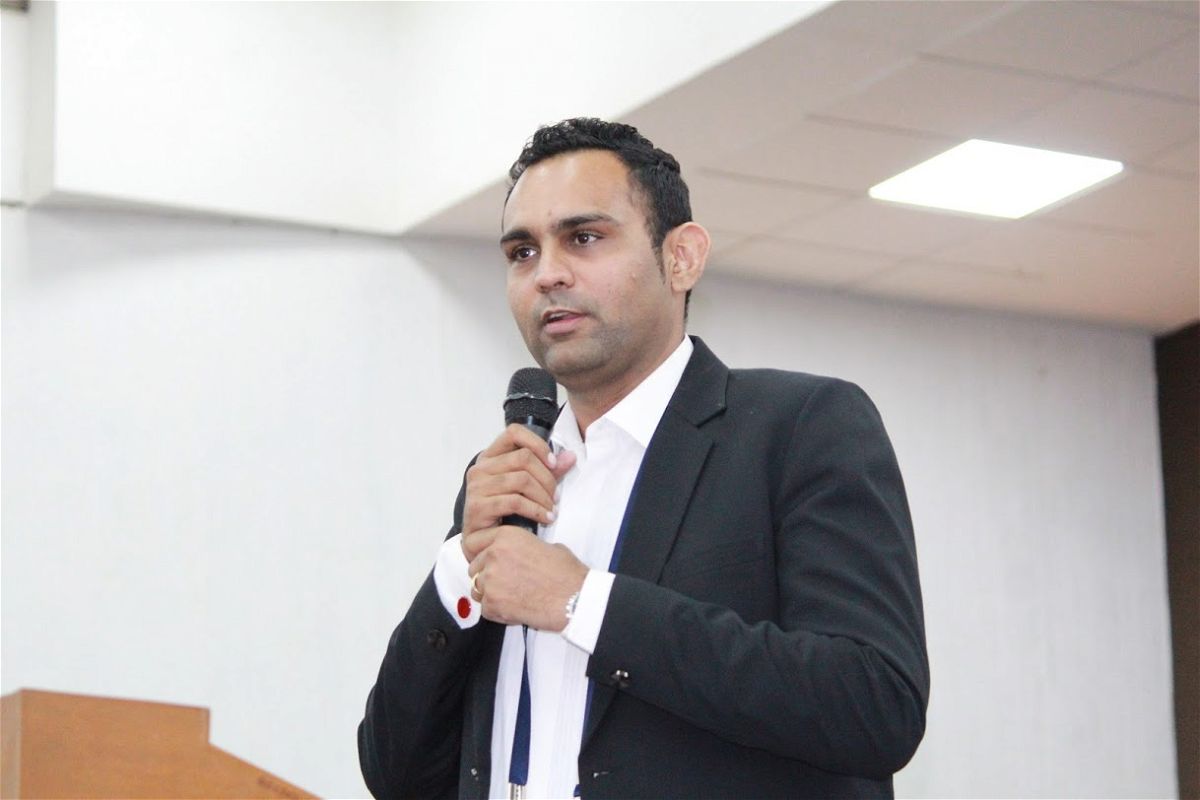 A thorough gentleman, and a man you can bank upon. Head of ChessBase India Power - Ankit Dalal \ Photo: Amruta Mokal

In case of any difficulties we also have three members from ChessBase India family who will be in Barcelona as players: Niklesh Jain, editor-in-chief of Hindi newspage, Atul Dahale, Project manager and ChessBase expert and Shahid Ahmed, editor and senior coordinator. They would always be ready to help!

The best way to know about the costs is to give a call to the ChessBase India Power Hotline number (details below) and speak to our representative. This is because the number of tournaments that one might want to play differs from person to person. However, to give you a rough idea of what you would be facing:

This is the one where ten people will be managed by Ankit Dalal:

* Management of all candidates

This is where you do not want to be a part of the 10-member group tour.

To know more about ChessBase India Power, visit us at: https://power.chessbase.in/

Because chess players must play chess!

Note: Players outside India can also avail of the above services. Please write to us at accommodations@chessbase.in and we will get back to you.