Chess is much more than a sport. It's not just about championships, titles and glory. It can be used to inculcate and improve life skills, decision making ability, differentiation between right and wrong and much more. Wang-Sheng Lee along with Asad Islam and Aaron Nicholas have conducted a randomised field experiment to investigate the benefits of an intensive chess training program undertaken by a primary school students in a developing country context. The research cites a progress made by Chess in Schools program in India and efforts by AICF to promote chess in India. Photo: Asad Islam

“Parents are realizing that chess is a game that teaches lessons about life such as decision making and foresight,” according to Puneet Jaiswal who operates a chess academy at Delhi’s east Patel Nagar. Based on a randomised control trial in rural Bangladesh, scientific evidence has recently been provided that supports this notion.

In many life situations, it is often the case that with great risk often comes great reward. However, the line between necessary calculated risk-taking and reckless behaviour is sometimes difficult to determine. Can playing chess help children better appreciate the concept of risk from a young age that will be useful in later life?

Our research, which was recently published in the Journal of Development Economics – a leading field journal in economics – found that learning the rules of the game, basic chess strategy and repeatedly playing chess over time has a significant positive effect on reducing the level of risk aversion in children (Islam, Lee and Nicholas, 2021). 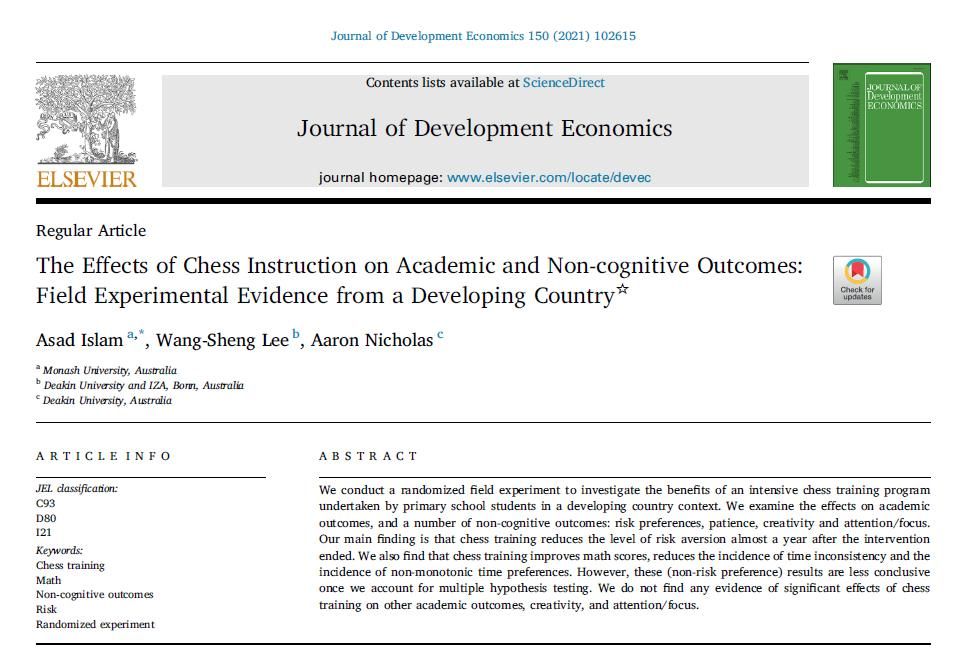 We conducted a field experiment to examine the effects of intensive chess lessons among grade five students in rural Bangladesh who had no previous exposure to chess. The lesson plan was based on free instructional chess materials available from the Chess in Schools Commission of the World Chess Federation (FIDE). Over 400 students participated in the randomized experiment. Students participated in a 30-hour chess training program over a three-week period and were taught by qualified chess coaches. They were followed closely for nearly a year after their training had ended. 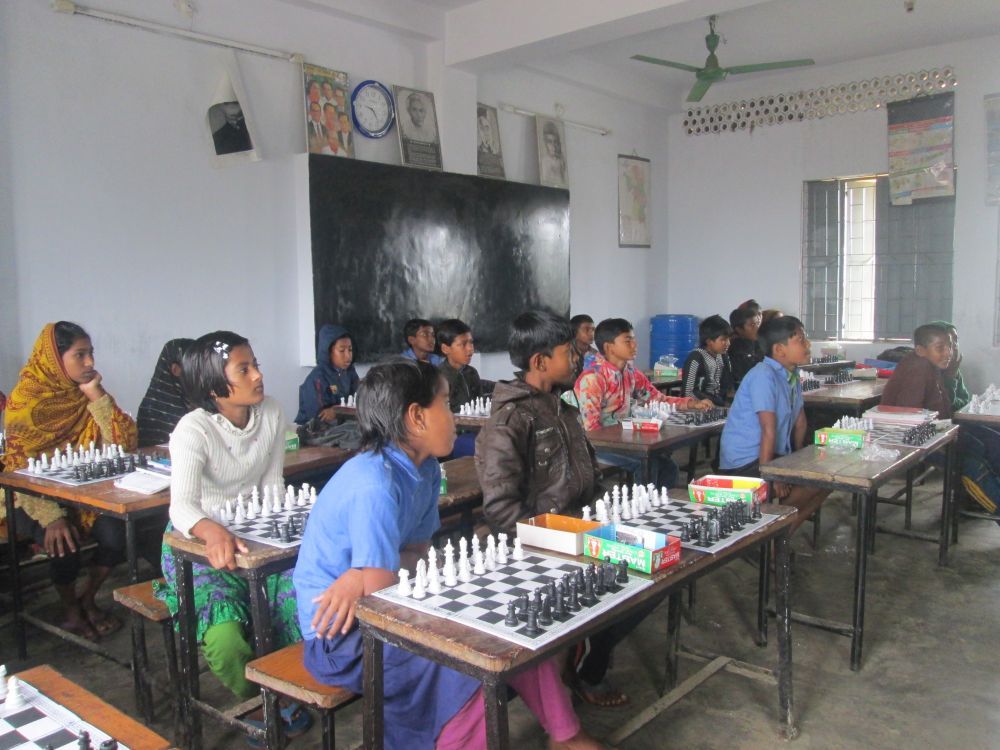 A school classroom used for chess lessons in the study | Photo: Asad Islam 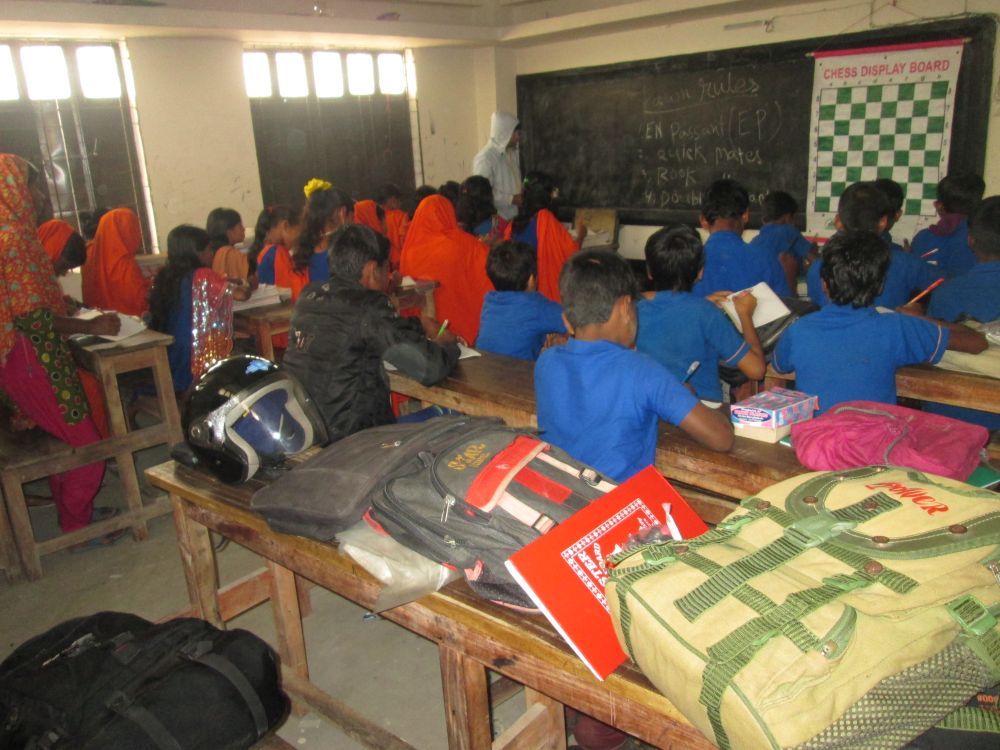 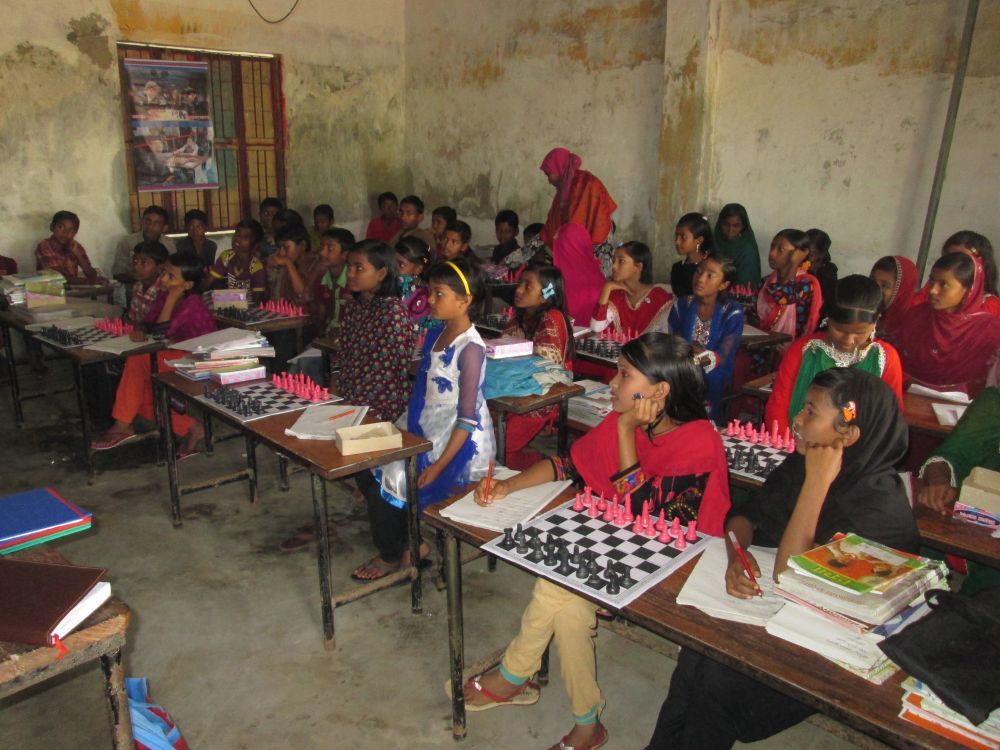 Learning chess from a young age may teach students to recognise opportunities to take calculated (rather than unknown) risks, as reflected in the choice of opening moves to use against a specific opponent, and in assessing the appropriate time to sacrifice material to attack an enemy king. 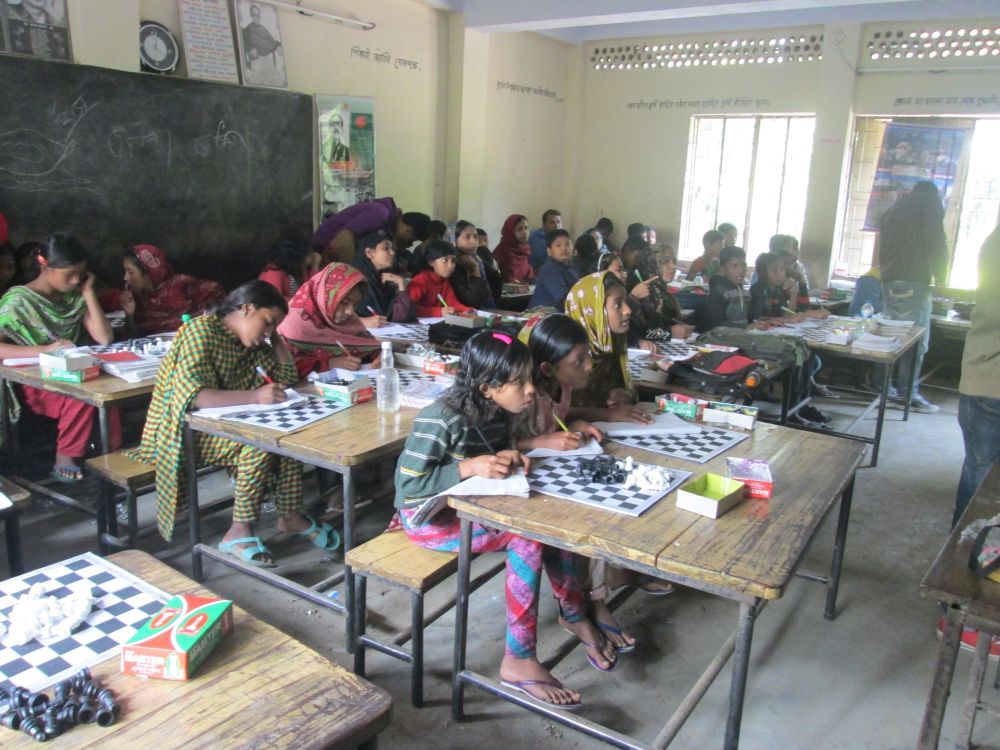 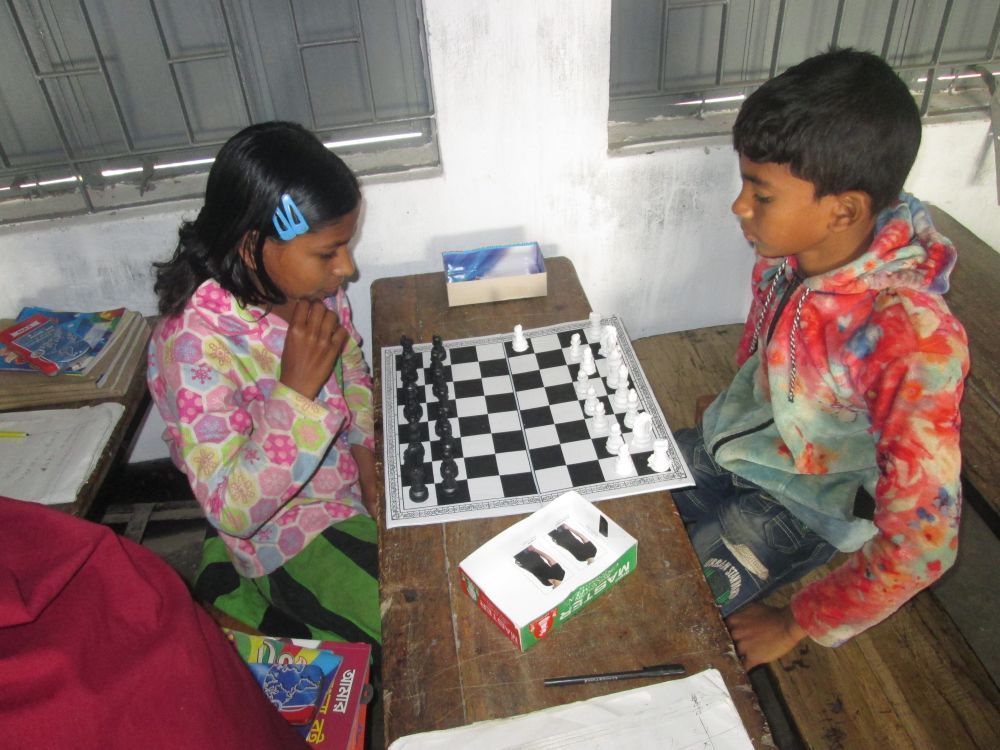 Chess playing may also decrease risk aversion through increased exposure to win/lose situations and competition, and by teaching one how to embrace losses and failure.

Uncertainty is inevitable from birth and learning how to take calculated risks is important in many life situations. Helping to model, nurture and teach good risk-taking skills to children will help them be better prepared to meet life’s challenges. 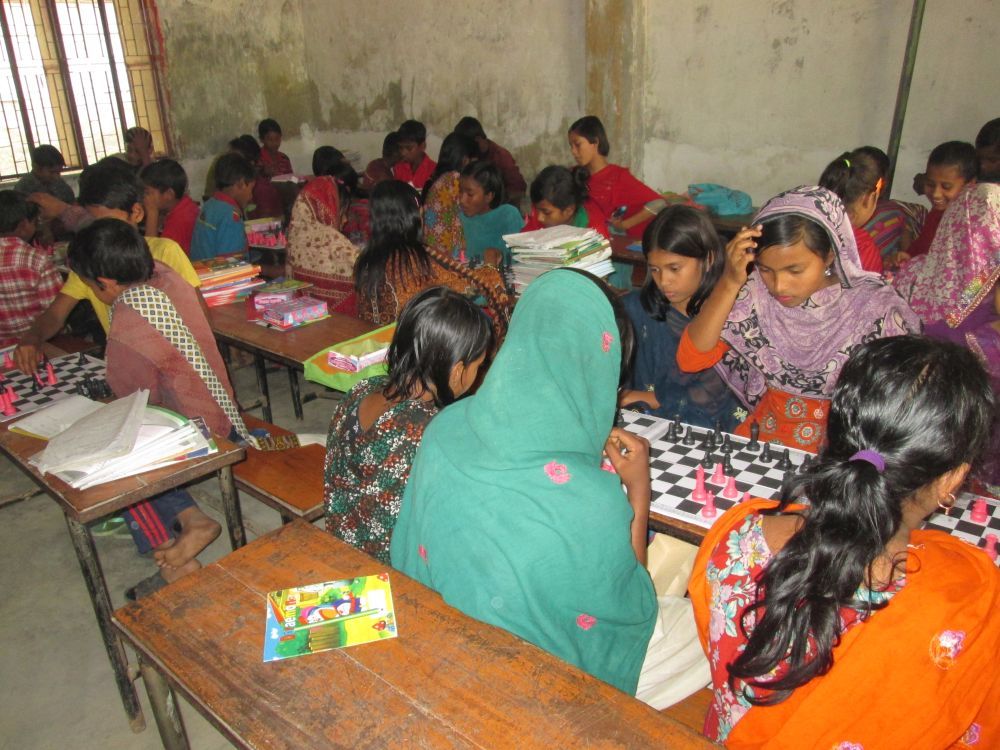 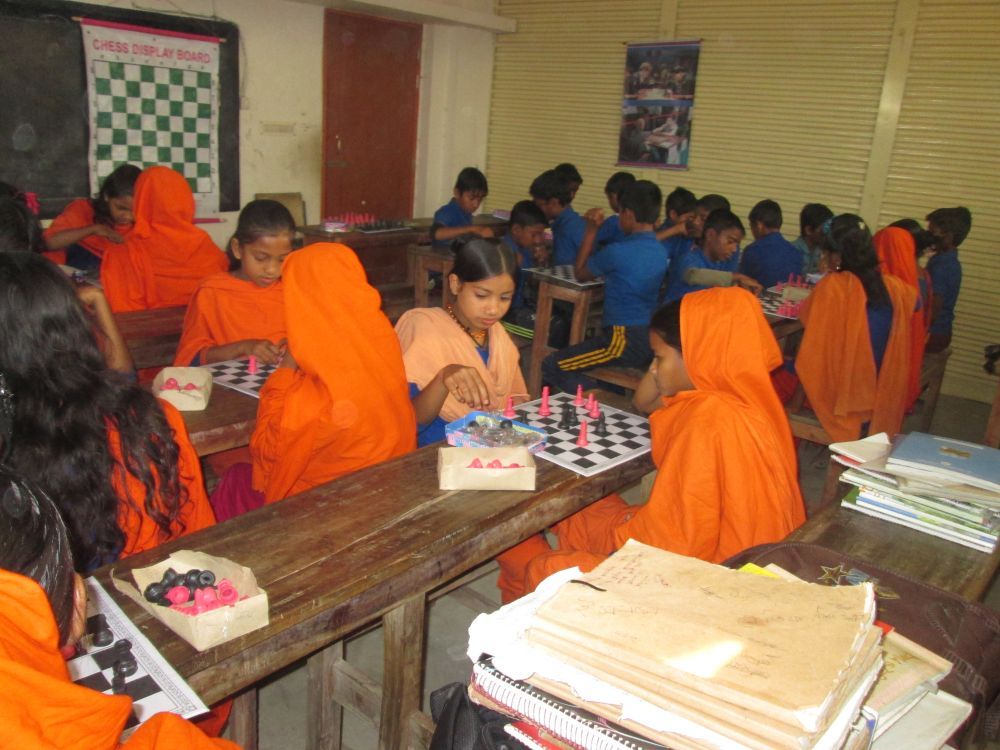 This is more fun than regular school! | Photo: Asad Islam

Some excerpts from the paper:

“The chess syllabus used for our experiment includes coverage of risk related concepts such as using risky openings (the Scholar’s mate, otherwise known as the four-move checkmate) and making sacrifices. Going for checkmate early in the game by moving one’s queen out early is considered to be a risky strategy because if it does not work, it can backfire and lead to a disadvantage in one’s position (e.g. other pieces are undeveloped). However, sacrificing can be an optimal strategy when one is already in a lost position. As there is nothing to lose, one can risk everything to try to checkmate the opponent.” (p.2)

“The role of risk in chess can be seen in how computer chess software function. Computers are now better at chess than even the world’s strongest grandmasters, and we can learn more about how the game is optimally played from studying their games and using them for analysis. When a computer plays chess, there is no element of psychology involved. The computer never gets tired and does not care who it is playing. There is, however, a setting available in many commercial chess programs that allow one to set the “risk level” in the software. This setting changes the style of play of the computer opponent, who might play in a more risky style (i.e. have a higher tendency to sacrifice and attack) or in a less risky style (i.e. have a tendency to focus on longer term strategic objectives). A risky style leads to more wins and losses, with fewer drawn games, whereas a less risky style will lead to relatively more drawn chess games, and fewer wins and losses. It has some similarities to conservative and risky styles in investing, which is why there is anecdotal evidence that many firms in the financial industry view a competitive chess background as a positive factor when hiring.” (p.2)

“As introducing chess as a subject in school will not be very costly, the educational intervention we examine in this paper most certainly has the potential to be scaled up if smaller proof-of-concept studies such as this paper show positive results. Indeed, some countries like Armenia and Poland and cities like Bremen in Germany have already made the decision to scale up despite scant rigorous experimental evidence on the effects of chess instruction. Furthermore, neighbouring India is making progress in introducing chess to the school curriculum. India currently has about 17 million children involved nationwide, especially in the states of Gujarat and Tamil Nadu where chess is part of the curriculum. There is a possibility that chess will be introduced to schools around the country. So far, largely due to the continuing efforts of the All India Chess Federation (AICF), over 1000 schools in the Delhi region in India have already adopted chess as a sport in the past few years.” (p.3)

“It is often said that chess is an easy game to learn but difficult to master. Our intervention helped to introduce the game of chess to students who had, in general, previously not been exposed to the game. Beyond the rules of how pieces move and how the game is won, strategy and tactics in various phases of the game were also introduced. It was ascertained that approximately nine out of ten students continued to play and practice chess when they were asked 9–10 months after the intensive three-week chess course ended. It is plausible that this repeated playing and honing of their skills could have contributed to a better appreciation for the concept of risk-taking, leading to a reduction in risk aversion. Our findings are consistent with evidence showing a link between cognitive development and a reduction in risk aversion.” (p.16) 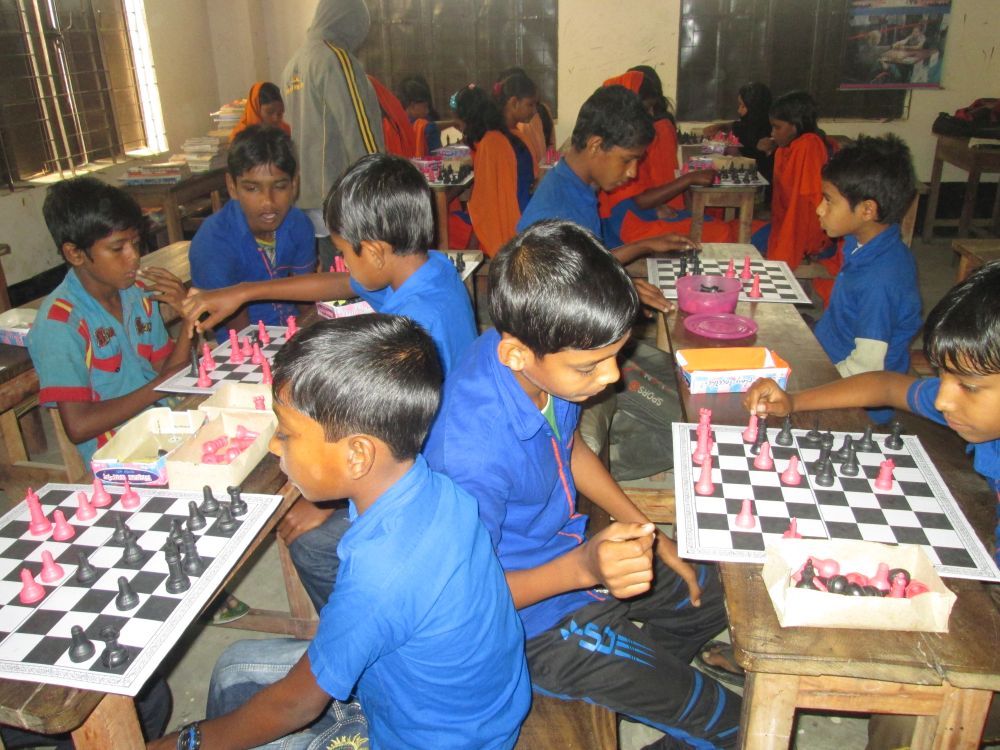 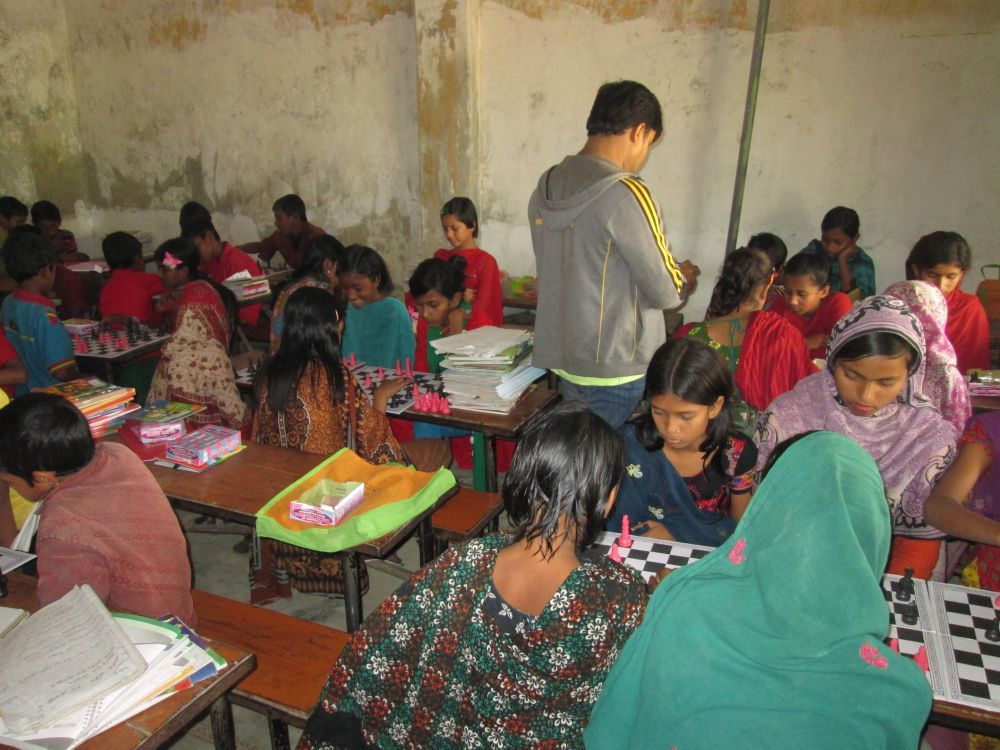 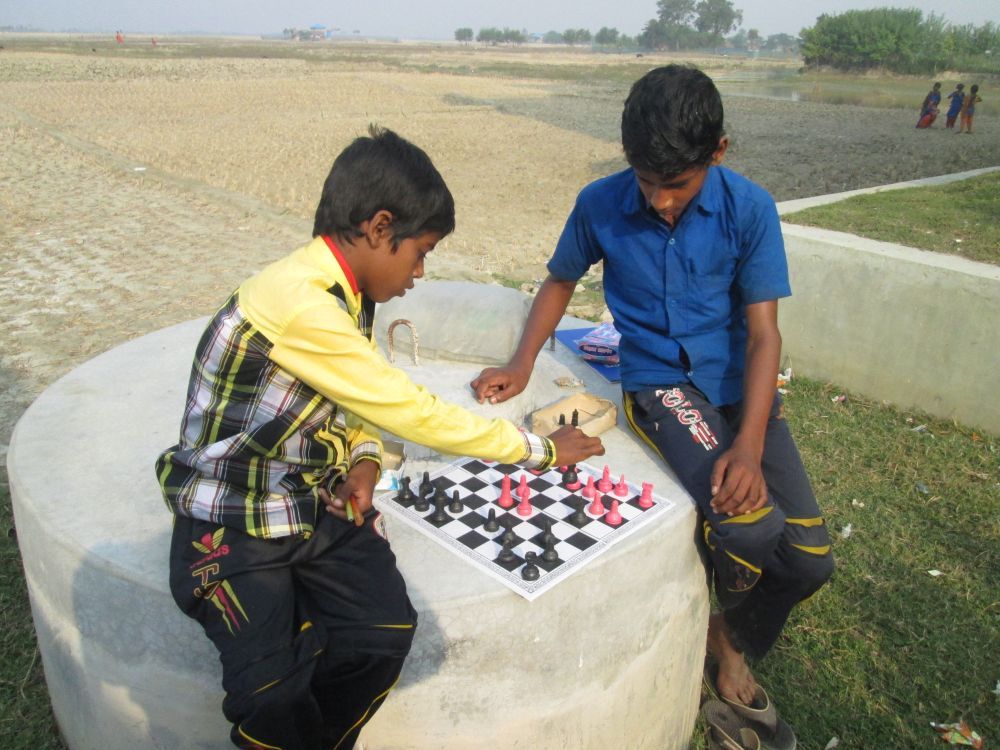 We can play after school too! | Photo: Asad Islam

“Knowledge of the opponent and his strong and weak points can help in the taking of a risky decision.”

The results from this paper are timely, as the vision of the All India Chess Federation (AICF) for 2021-23 includes providing funding for a School Teachers Training Programme and Chess in School Seminars.

Wang-Sheng Lee is an economist by profession. He finished runner-up in the Asian Junior Chess Championships held in India in 1990 and formerly represented Singapore in the Chess Olympiad. He achieved a highest international rating of 2320 and currently keeps up with the latest developments in chess as a hobby.