With a rating of 2084, Arvinder Preet Singh started as the 26th seed at the World Amateur Chess Championships below 2300 that were held in Cagliari, Italy from the 22nd to the 29th of April 2018. He lost his second and sixth round and with a score of 4.0/6 it seemed as if it would be just another normal event. But the Punjab lad pumped himself up for the final stretch and scored three wins in the last three rounds. More importantly he defeated the existing leaders in their personal encounters and when the last round was over, Arvinder Preet Singh had become the World Amateur Champion!

Arvinder Preet Singh is the World Amateur Champion below 2300

The World Amateur Championships organized by FIDE are held in three different rating categories - under-1700, under-2000 and under-2300. The most keenly contested of them all is definitely the below 2300 section where you have players nearly of the strength of International Masters trying their best to win the championship. The tournament this year was held in Cagliari, Italy from the 22nd to the 29th of April 2018.

Players from 21 countries participated in the event with 9 FMs in the fray. Indian hopes rested on the shoulders of Hemal Thanki, the reigning National Amateur champion, Arvinder Preet Singh and G. Sandhya in the below 2300 section. Arvinder with a rating of 2084 was the 26th seed. In such events the margin for error is quite low and one bad move is often the difference between a powerful finish and a mediocre performance. In the second round itself, the lad from Punjab faltered as he lost to Caetano Hugo Zanotti Mendonca rated 2208. But Arvinder didn't lose his composure. He came back strongly and beat three higher rated opponents to reach 4.0/5.

Those who know Arvinder, would also know that 2084 is not his real strength. Singh had a rating of 2185, way back in 2007. So the level of play already existed, all that was needed was the belief. Arvinder's chances to become a World Champion where dealt a severe blow when he lost the sixth round against Chipanga Chiletso rated 2126. With 4.0/6, almost all hopes were lost. But Arvinder didn't give up. He won the seventh round and leading to the crucial eighth round he was facing Gunbayar Myagmarsuren who had been playing sublime chess and was on 6.5/7. Talking to ChessBase India, Arvinder said, "Before the start of the eigth round I was on 5.0/7, while my opponent was on comfortable sole leader with 6.5/7 score. I saw his games and found that he plays the Caro Kann, Petroff and Sicilian against e4. He needed just a draw to maintain his lead and so it was not a surprise for me that he played the Petroff!"

After the penultimate round victory, this is how things stood on the top two boards:

Says Arvinder, "Before the start of last round I was on 6.0/8 score and my opponent was on 7.0/8. I needed to win with the black pieces to have any chance of finishing at the top. I felt that the Dutch Defence was a perfect choice for this situation. After 1.d4 when I replied with 1...f5, my opponent play the Staunton Gambit with 2.e4!? This was a surprise for me. In the past Garavita also had played g3 normal Dutch systems. His opening choice made me sure that he was also playing for a win to make himself the champion in the case that Gunbayar who was playing on the second board with 6.5 points wins."

Arvinder grabbed the opportunity of his opponent playing for a win with both hands and played a fantastic game with some solid opening preparation to not only win the game, but to score 7.0/9 and become the World Amateur Champion!

What a finale! After this victory Arvinder and Garavito were tied on the top spot with 7.0/9, but because the Indian had beaten his Colombian opponent he had superior direct encounter tiebreak! Arvinder went home richer by 800 Euros and he also received the title of FIDE Master (FM) for his achievement. 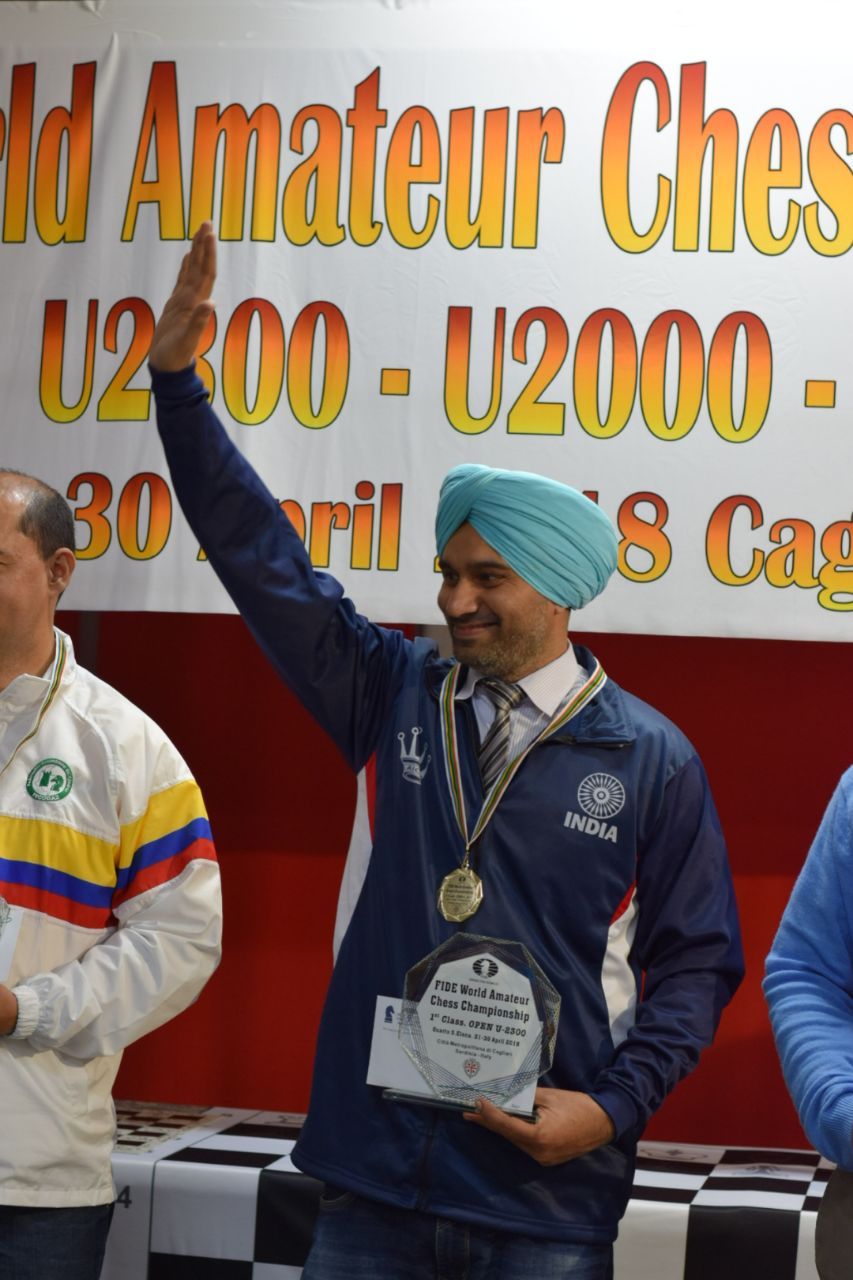 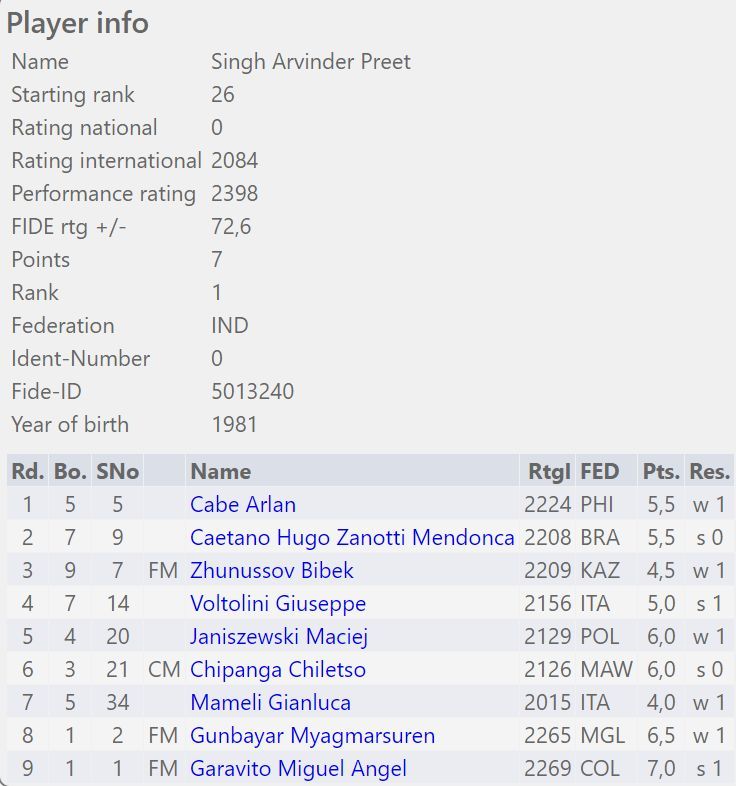 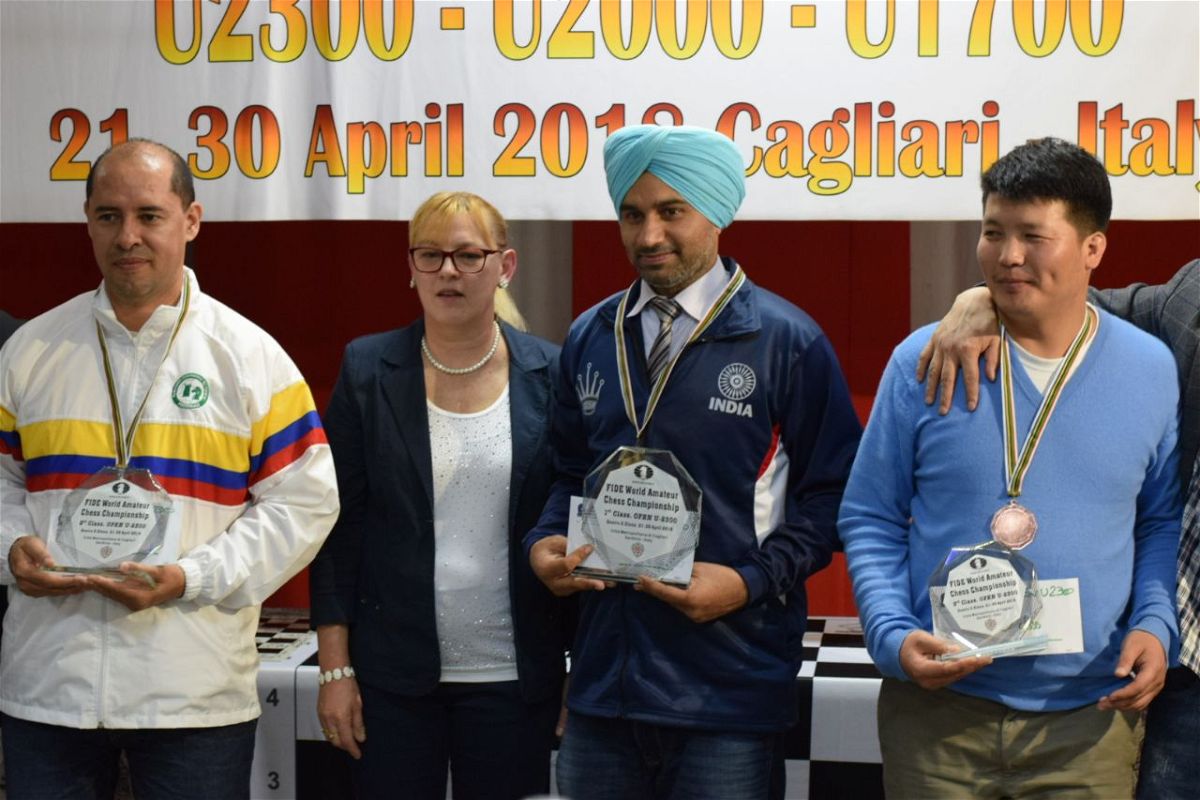 It always feels nice to see an Indian on top of the podium winning such a prestigious event | Photo: Palak Patel 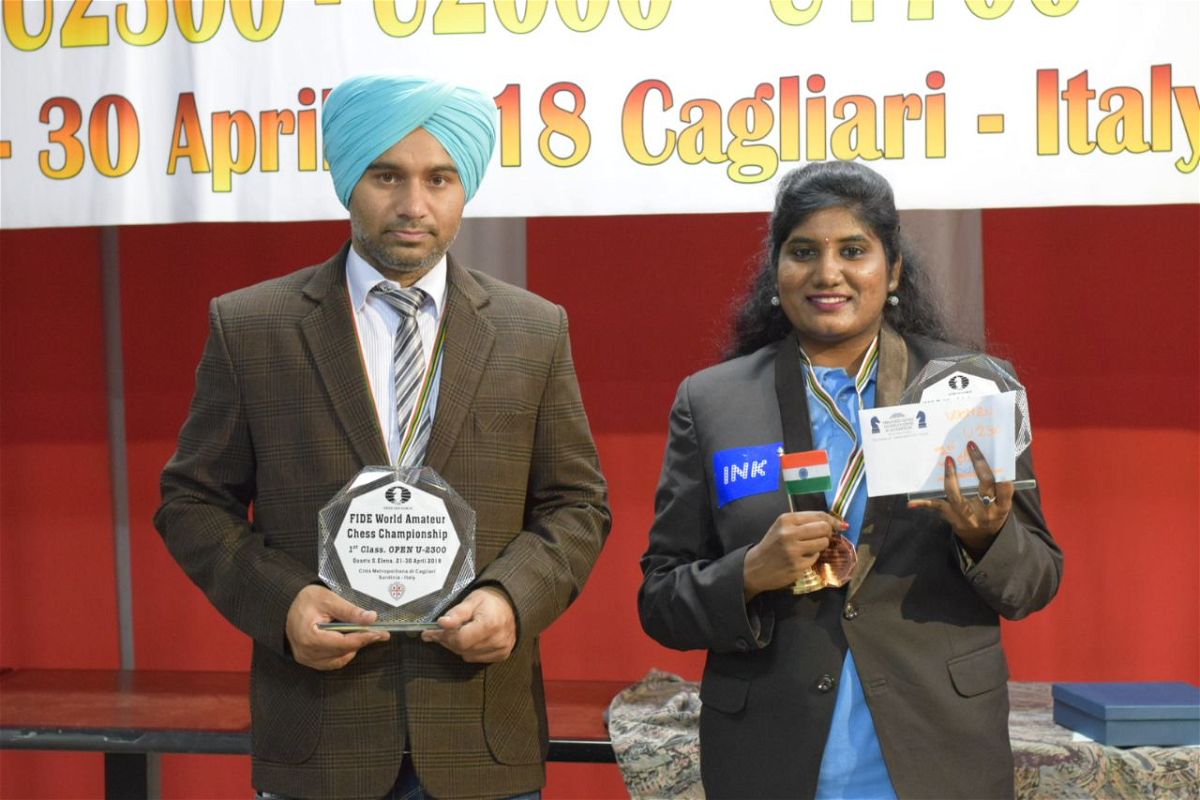 The current reality in the state of Punjab:

The state of Punjab has faced the problem of drug abuse among youngsters since a long time. School going kids are addicted to drugs and this is a problem that needs a solution. Since the last couple of years the biggest media house in Punjab and north India Punjab Kesari is supporting chess in the state. Director of Punjab Kesari, Abhijay Chopra, is trying to make use of chess to get rid of the problem of drug abuse. His analysis of the situation is the following, "Young kids come back from school and find that they have a lot of time on hand. As they are getting bored all of them meet together and indulge in something known as "Gedi" which essentially means encircling an area in a car with loud music playing. When these kids get bored of Gedi, they need something more exciting! That's where drugs come into the picture. This is the way in which the drugs culture is growing in the state of Punjab. The right way to fight this menace is to make kids make the best use of their time once they come back from school. And in this aspect there is no better sport than chess. Once hooked onto it, chess has the power to get the kids addicted to the game and make them disinterested in vices like Gedi and drugs."

In a state where chess is being used to fight the problem of drug abuse, Arvinder Preet's success at an international level comes as a tremendous boost. He is only the third FM from the state of Punjab after Ashwani Tiwari and the youngster 2003-born Dushyant Sharma. ChessBase India congratulates Arvinder Preet for becoming the World Amateur Champion and wish him success in his journey to become an International Master!