Rajdeep Sarkar and Varshini emerged as the National under 17 champions held in Bangalore, Karnataka. While the open section was hard fought with all the top three places scoring 8.0/11, in the girls section V.Varishini won the tournament with great ease with a score of 10.0/11. One of the highlights of the tournament was R.Vaishali playing in the open section and finishing third. We have pictures and game annotations from the event.

The National U-17 Chess Championship has been a notable national event in the annual chess calendar of India, with the tournament acting as a playground for many a talented youngsters to showcase their skills. The city of Bangalore, Karnataka hosted the 26th edition of this prestigious tournament. FM Rajdeep Sarkar won the open section on tiebreaks with 8.0/11, while WFM V. Varshini won the Girls section with 10.0/11.

Into its 26th edition, the BEL Officers Club, Bangalore, Karnataka hosted the 2015 National U-17 Championship from 3rd October, 2015 to 11th October, 2015. The time control was 90 minutes per player for the whole game plus 30 seconds increment per move.

The top three players from this tournament qualify for the World Youth Championships 2016, and consequently, this made for tough competition among the contenders. The tournament was an 11 round swiss with 81 players in the open section and 64 in the girls.

The open group was a close fight among the young stars battling for the top prize. FM Rajdeep Sarkar and WFM R. Vaishali (yes! she played in the open section!) were leading with 8.0/10, when a curious string of victories by White on the first four boards in the final round resulted in six players being tied at the top for 8.0/11!

This invited M/s. Bucholz and Co. to come into play and decide on the winners. 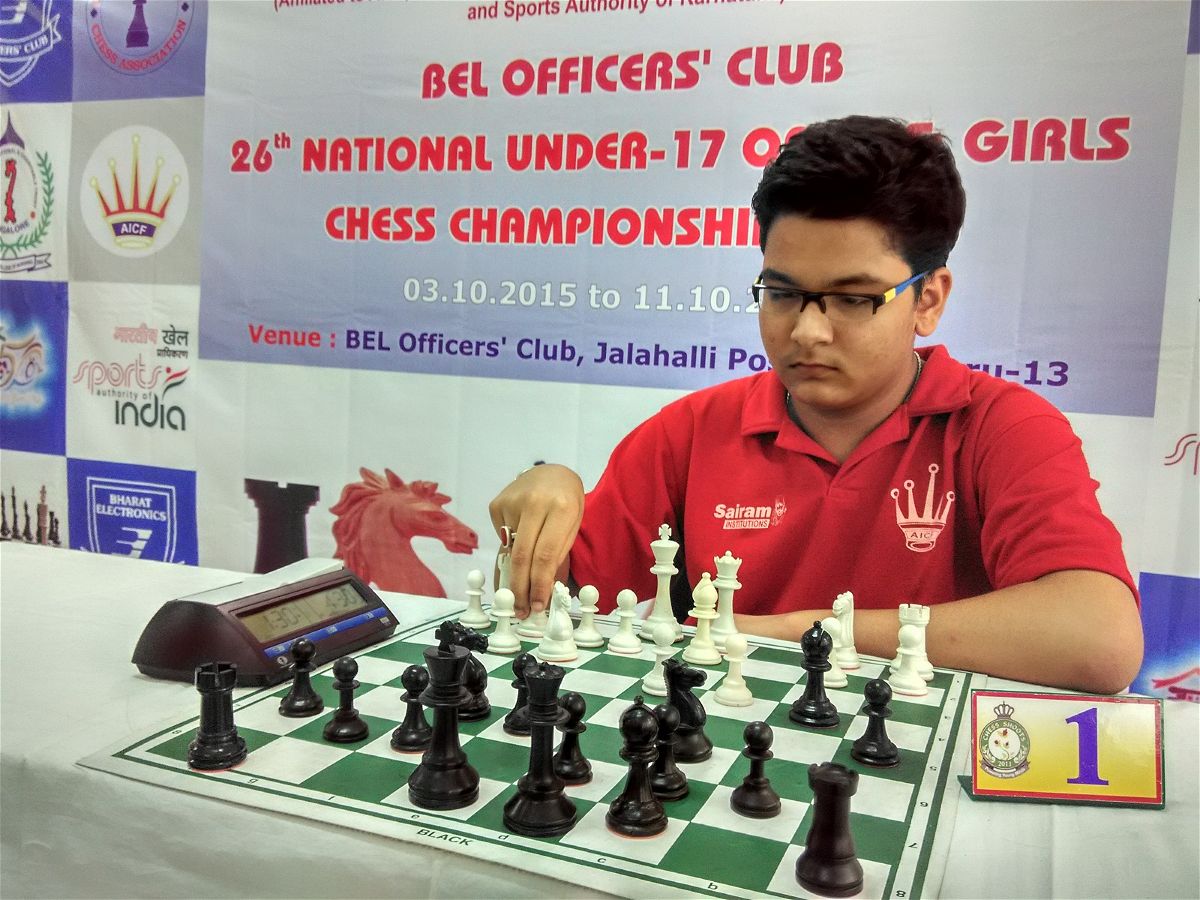 Rajdeep began the competition as the eighth seed, however, was coasting through the tournament, winning his first five rounds, grabbing the early lead. He then paused to give away two draws, and yet again shot into the sole lead after his eighth round victory over Jayakumaar S. (2223) of Tamil Nadu. 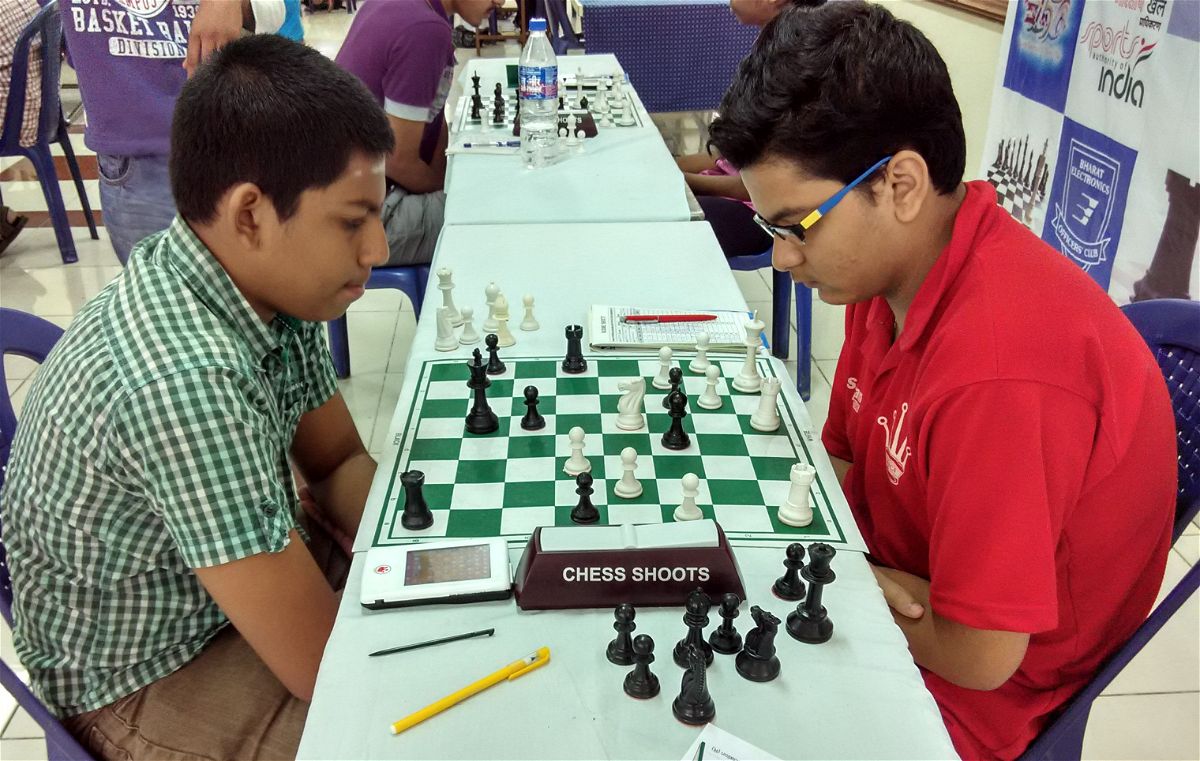 After managing to win this game, he gave away two more draws. Despite losing the final round encounter, Sarkar was crowned the National U-17 Champion, 2015, on tiebreak. 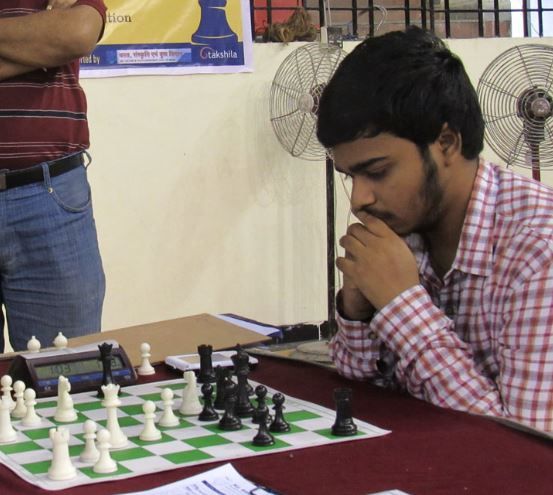 IM Krishna Teja N. of Andhra Pradesh finished second, after a last round victory propelled him to 8.0/11. Krishna started the tournament on a shaky note, with two draws in the first three rounds to much lower rated opponents. However, the newly crowned Asian Youth (U-18) Champion clawed back into the competition and place himself second on tiebreak.

IM Krishna Teja had his lucky moments in the tournament. In the following game, he dubiously gives up a piece, and still manages to win. 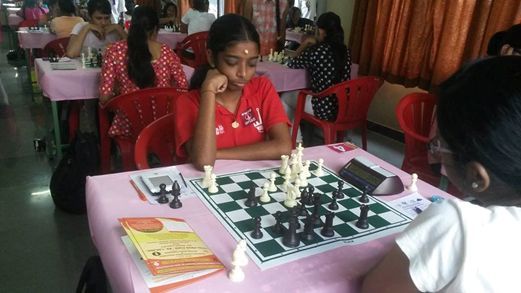 Displaying supreme confidence in her abilities, Tamil Nadu talent WFM R. Vaishali played in the Open section and scored 8.0/11, finishing third. Going into the final round, she was leading jointly with FM Sarkar. In a memorable turn of events, both FM Sarkar and WFM Vaishali lost their games, pushing Vaishali to third place on tiebreak.

Here is one of Vaishali's fine efforts: 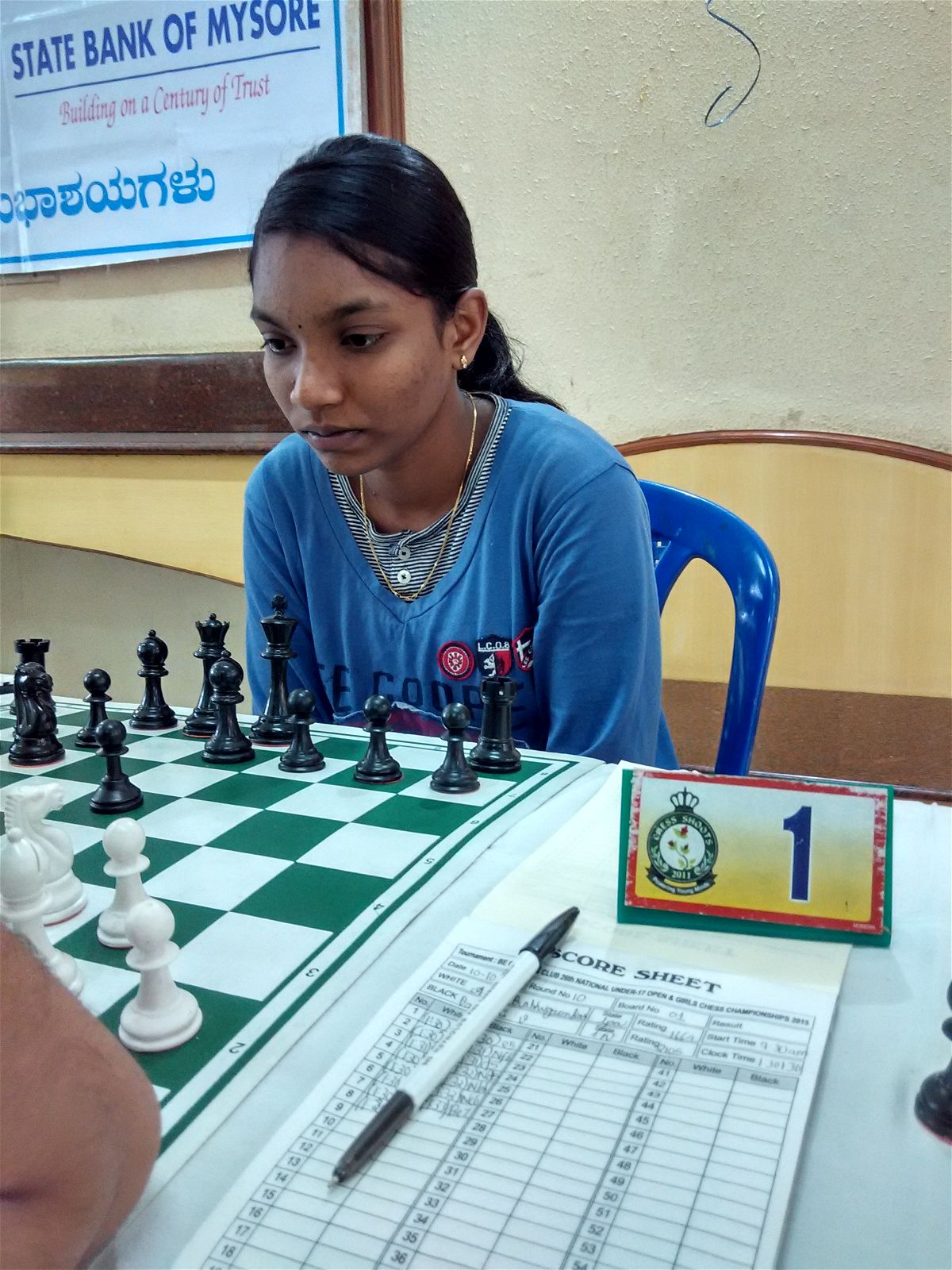 With WFM Vaishali R. playing in the Open section, her state-mate WFM Varshini V made mincemeat of her opposition, granting two draws and winning her remaining games. She scored a hefty 10/11, winning by a 1.5 points margin! This was her second consecutive victory at the National U-17 Championship. 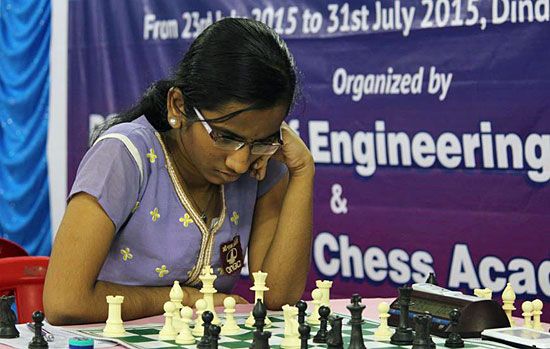 WFM Mahalakshmi M of Tamil Nadu was second with 8.5/11 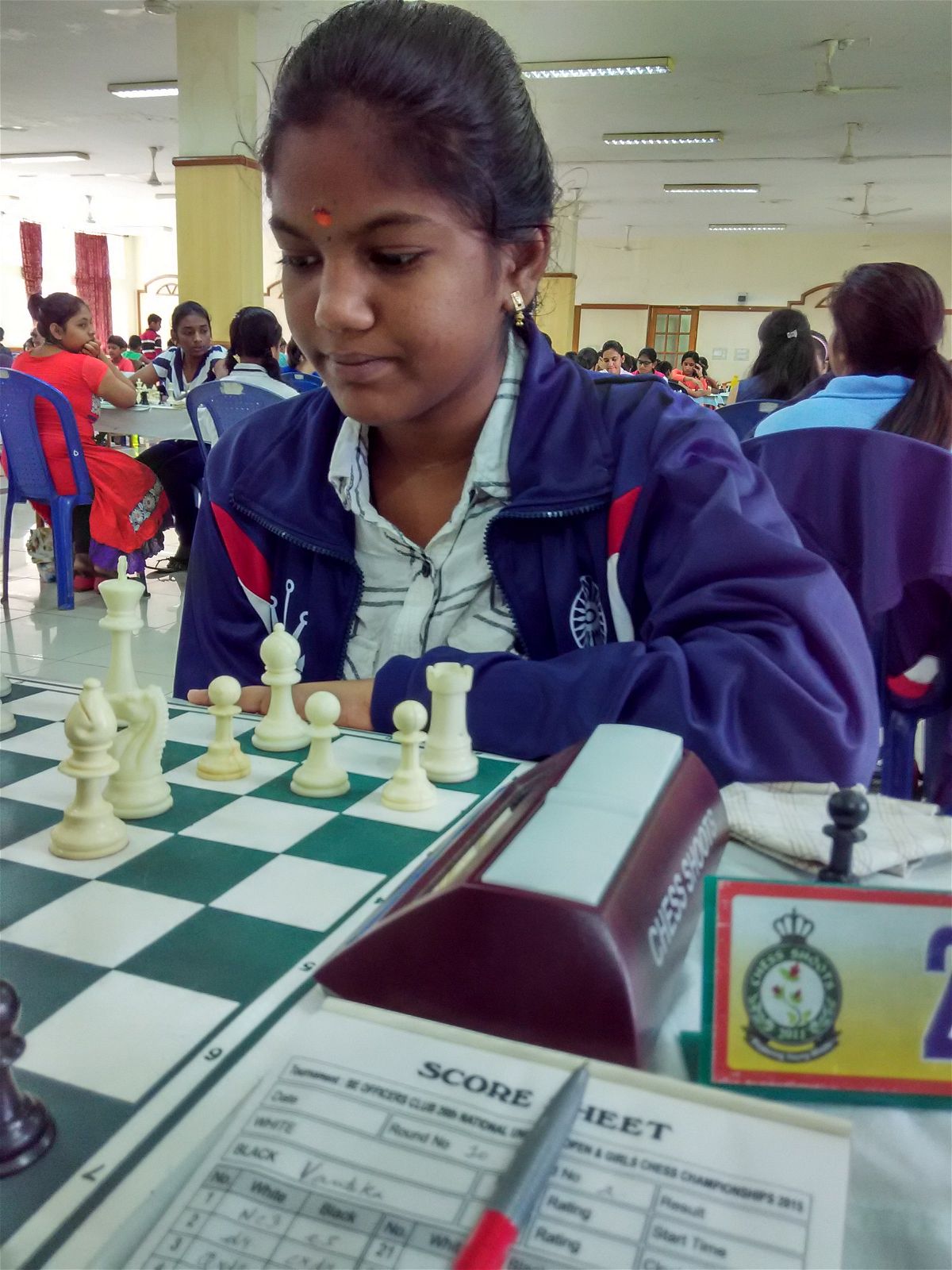 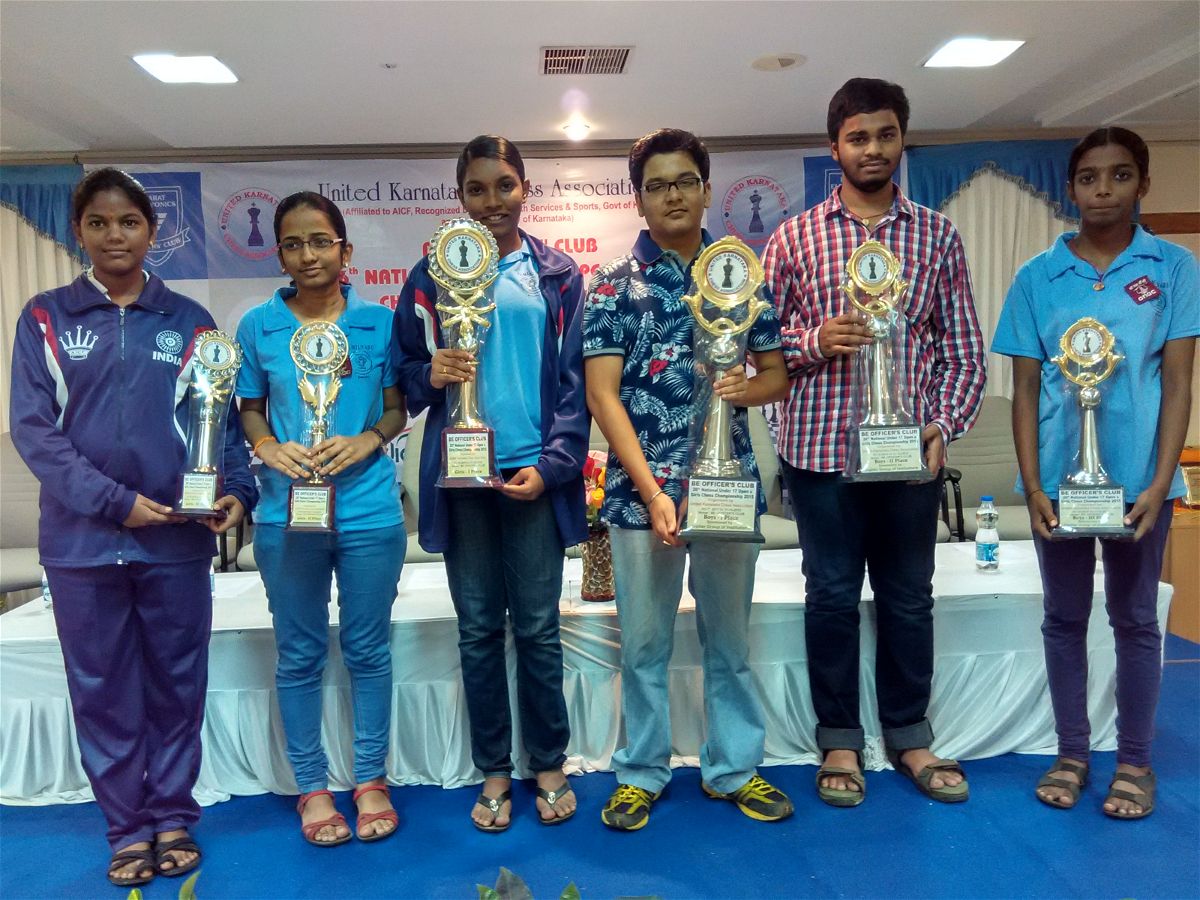