The classical part of world women championship in Tehran, Iran, has concluded but the winner, similar to the last World Championship in New York, has yet to be determined by tiebreak. The two finalists, after shedding blood in rounds two and three, took a rest and agreed to a rather fast draw in the last round to go for a tiebreak. Report, tiebreak preview, and analysis by GM Elshan Moradiabadi.

Surprisingly, this is going to be Anna Muzychuk’s first tie-break while Tan Zhongyi has played a handful of them, as early as round two. Muzychuk is the incumbent Women World champion in both blitz and rapid so one might think it is to her advantage to enter this accelerated playoff. Still, while Muzychuk may have a clear edge over Tan Zhongyi in a long rapid or blitz tournament, in a short match against the same opponent Anna’s chances are merely a bit better if at all. 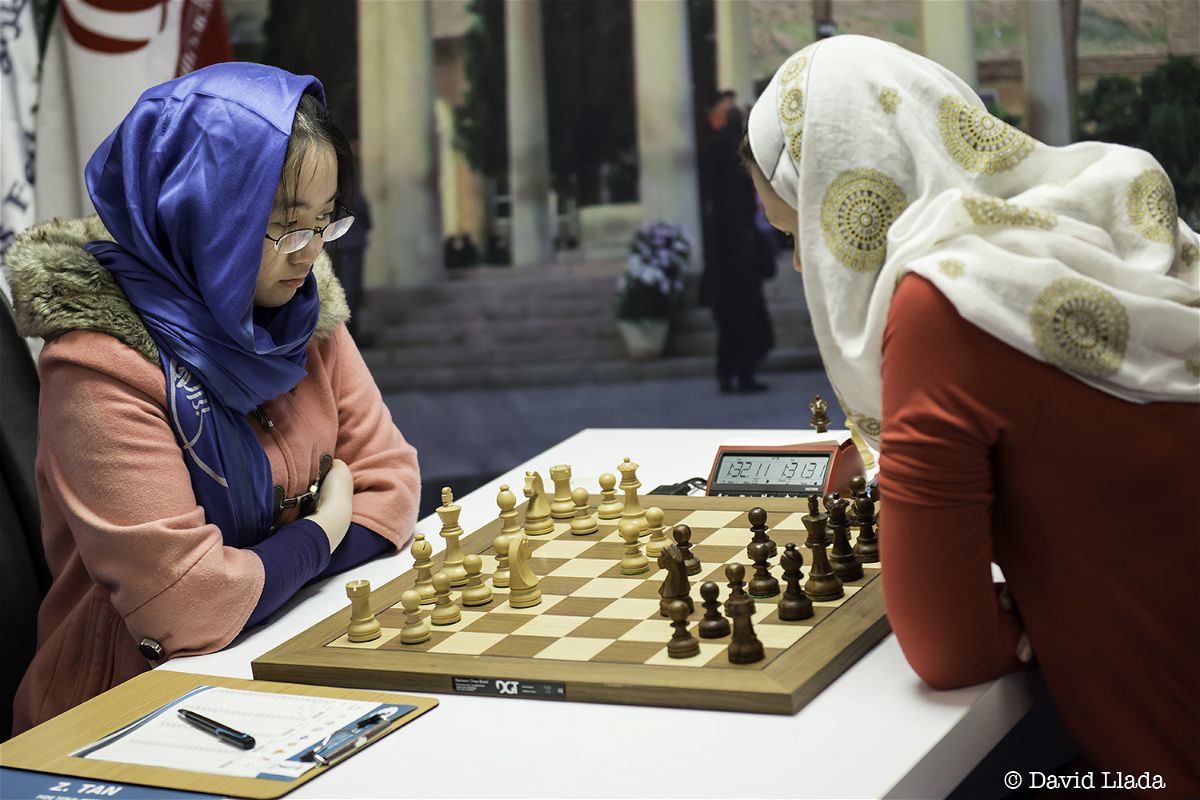 Today’s game was as uneventful as the final classical game between Carlsen and Karjakin.

In a closed Catalan, Tan’s early queen sortie followed by cxd5 forced a symmetrical position in which players wasted no time in exchanging pieces. Soon, we saw Tan Zhongyi playing e4 which was nothing but a smooth tide in dead water. The ensuing middlegame/endgame-ish position was a promised opposite color bishop position in which neither side could seek a target in opponent’s camp. Once the magical 30th move had been reached, the players signed the scoresheet to end a the uneventful day. Nevertheless, this calm day will assuredly be followed by exciting tiebreaks!

Players performance and the forthcoming tiebreak

Tan Zhongyi and Anna Muzychuk came a long way for tomorrow’s tiebreak. Qualifying for this tournament is probably not a difficult matter for them but the challenges started right after the Olympiad. First there was the Hijab controversy that raised questions with regard to the possibility of organizing this event in Iran, in spite of it being the only federation to bid to organize it. The subsequent months saw countless reports, stories, petitions, verbal discussions on social media, and etc. For instance, for Anna, things were quite unclear as her sister had dropped out of the event, stating Iran was not ‘a suitable place’ to organize world class events. Nevertheless, to their credit, the Muzychuk family proved very democratic, since Anna decided to play in this championship nonetheless.

While Tan Zhongyi was of course far away from all these controversies, her path to the final was much ‘bumpier’ than Anna’s. The nature of this tournament forces much stronger match-ups against lower rated players. In fact, she started very tough from the very first round, when she got in some trouble against David Llada's favorite player WGM Sabina Foisor who showed great fighting spirit and put up a tense battle against Tan Zhongyi but the Chinese player kept her calm and played consistently well in the second game in order to make it to the second round without needing a tiebreak. 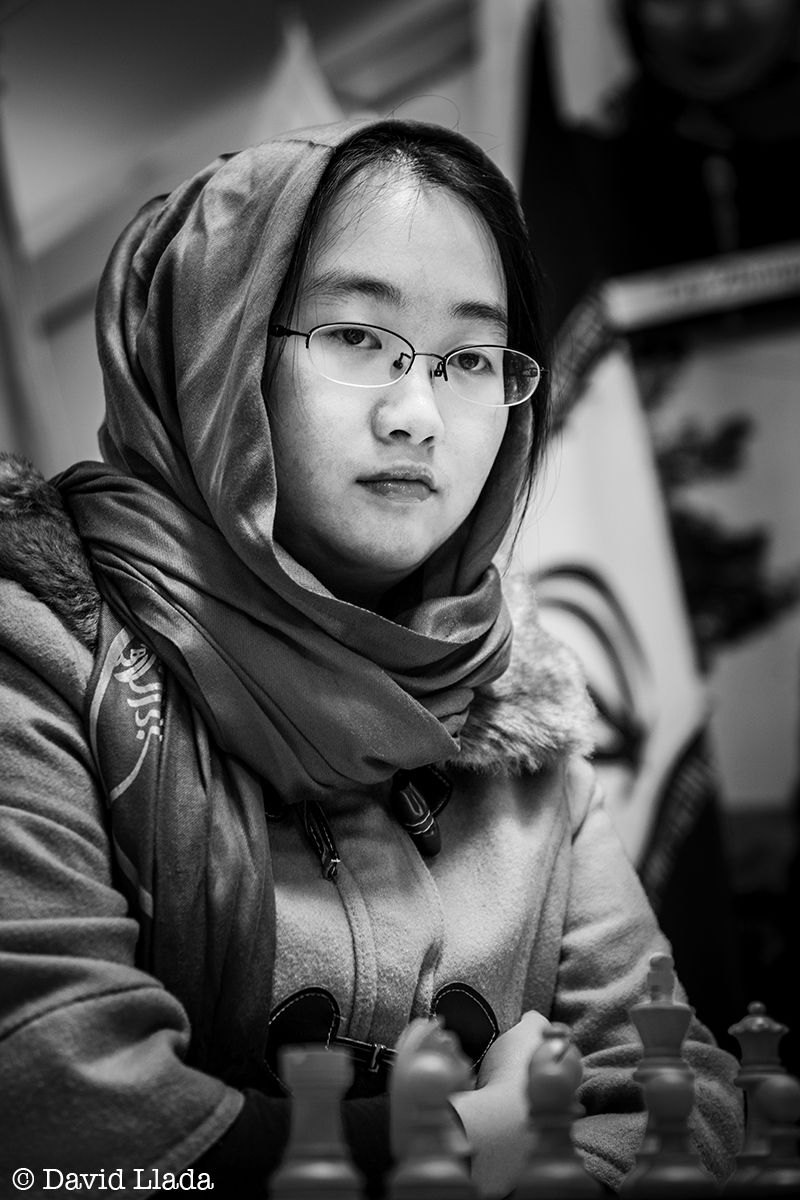 It wasn't the smoothest ride for Tan Zhongyi to the final, but she got there, and that's what counts.

She then faced the strong opponent, ex-world champion Anna Ushenina from Ukraine, whom she beat in the final Armageddon game. This trend of tiebreaks was the usual theme in Tan’s other matches against both Indians Padmini Rout and Hariak Dronavali, only winning one match without a tiebreak against Ju Wenjun, in what turned out to be the biggest upset of the event so far. Tan’s greatest asset which she has shown consistently is her ability to play even better when she is behind. She managed to level the matches a number of times and whenever she seemed to have hit rock bottom, she came back with more power and steam.

Anna Muzychuk’s path to the final was the stark opposite. Being one of the top seeds, she did not face a hard fight in the very first round and managed to dictate her class and experience. In fact, she showed the same trend all the way until the quarter-final with the exception of her game with black against Kashilinskaya. Even there, one could hardly see a clear-cut win for Kashilinskaya. 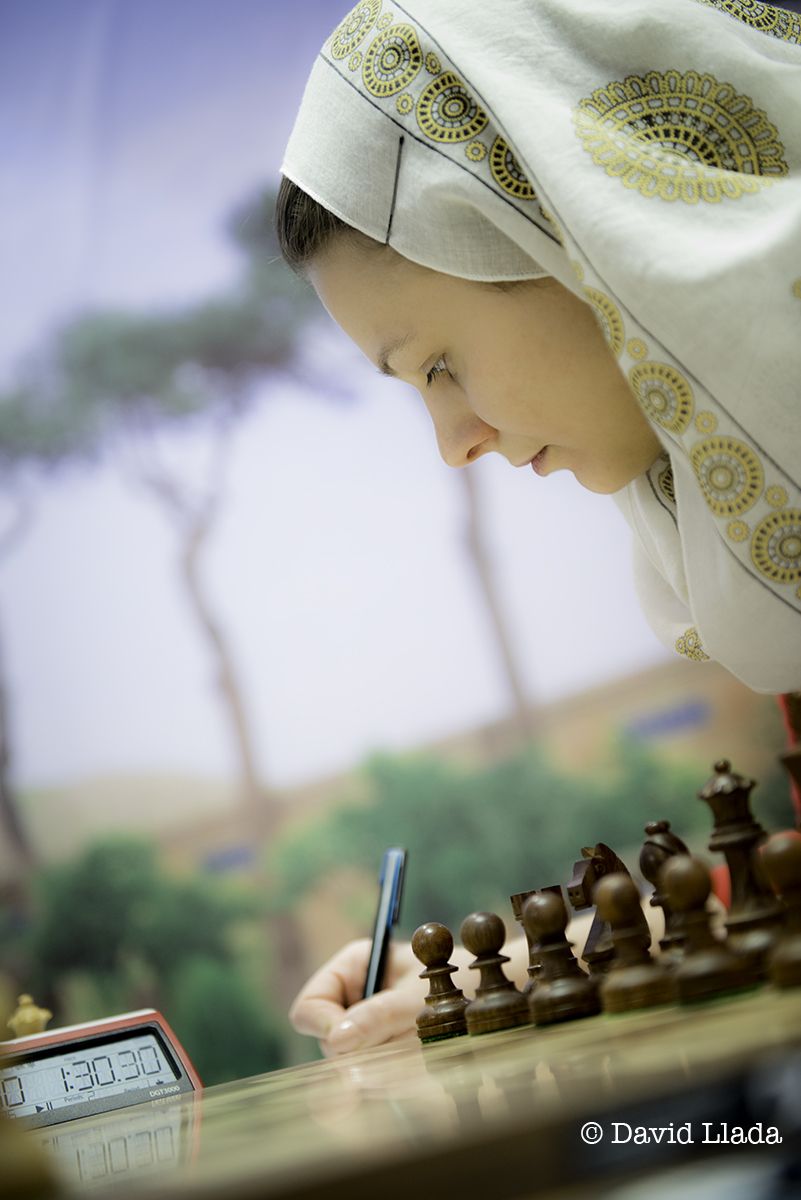 This will be Anna Muzychuk's first tiebreak in the tournament after a near perfect 9.0/10 ride to the final.

It was in the quarter-finals that Anna faced her first heavyweight opponent - in terms of chess strength - ex-world champion Antoaneta Stefanova. The Bulgarian had shown great form in Gibraltar and had had a good tournament up to that point in Tehran, however, for whatever reason, she barely managed to show the level of play she had been showing and Anna deservedly won the match.

In the semi-final, Anna once again had Caissa on her side when Kosteniuk blundered away a much better- possibly winning- position with white in the first game. Desperate to win and equalize, Kosteniuk took too many risks and lost the second game as well, allowing Anna to reach the final without a single tiebreak. Indeed Anna’s 9,0/10 was nothing short of spectacular, even if that path had been well-paved.

As we saw, the final match was a tense battle and luck was evenly distributed between the finalists. As in the main mini-match, Anna might be considered by many as the favorite or even clear favorite, however, your author believes that the power of returning to the match plays a much more important role in deciding the champion than just playing strong chess.

Whoever wins this match tomorrow will be a well-deserved winner, as they both showed resilience, good opening preparation, readiness for opportunities, and most importantly steel nerves when called upon.

Let us sit back and watch!