Women Challengers Round 2+3: Upsets all around!

Seven players including top seeded Soumya Swaminathan are in the lead with a perfect score after three rounds at the National Challengers 2017. Two rounds were played on Saturday and we witnessed huge number of upsets. Seasoned players like Nisha Mohota, Swathi Ghate, S. Meenakshi, Michelle Catherina and many others found the going tough against upcoming talents. We have round two plus three report, rich with pictures, analysis, results and also an interview with the top seed. "We must have more women tournaments in India and a grandmaster coach", says Soumya. 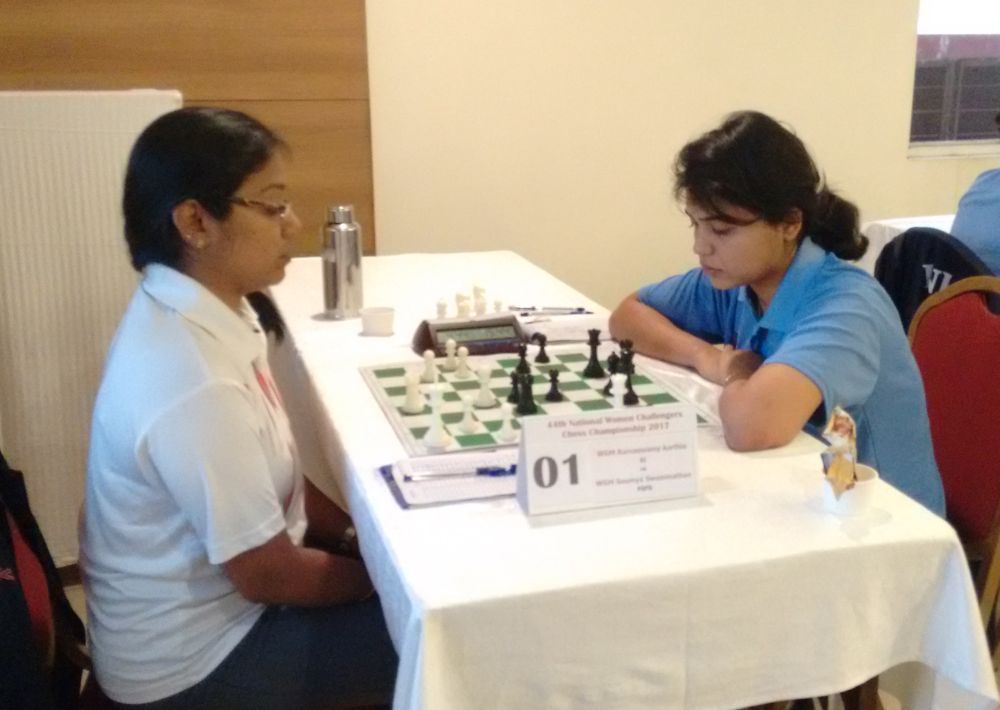 Soumya Swaminathan moved to 3.0/3, but it was only after some anxious moments in her game against Aarthie Ramaswamy
Aarthie vs Soumya, round three 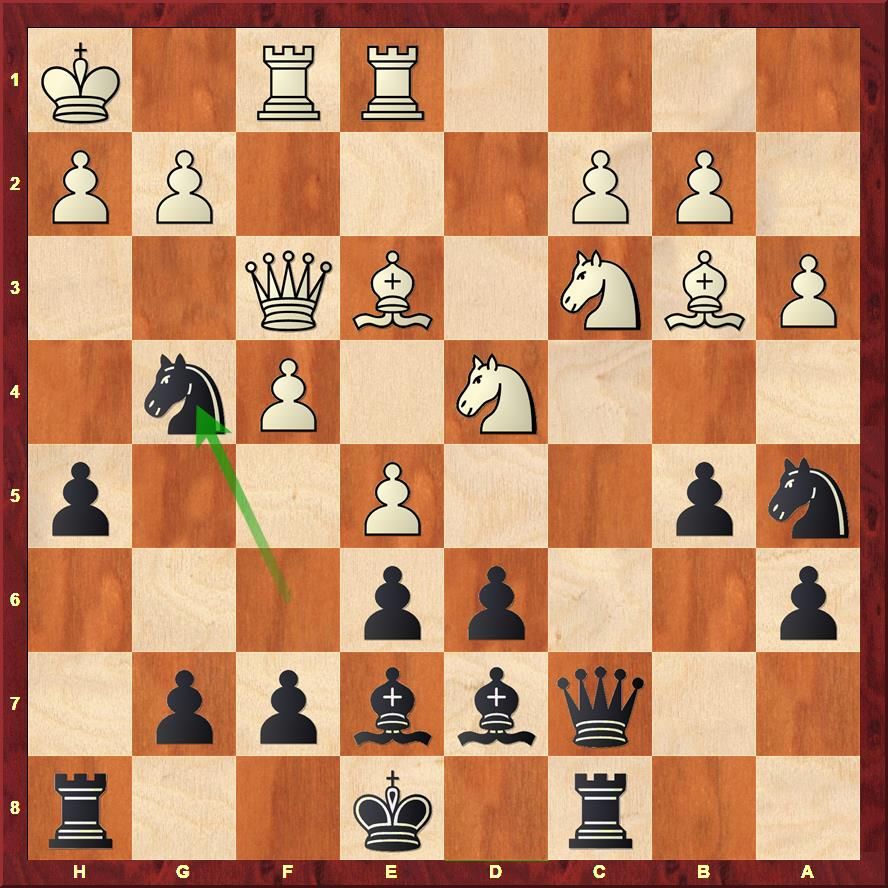 Black has just played her knight from f6 to g4. What is the correct way for White to play?
If you look at the position closely, you will see that the black king is still in the centre. Whatever has to be done, must be done now. And hence, White must open up the position with f5! with some really wild complications, but as you must have guessed, they all end in White's favour because of his safer king. Aarthie missed the chance and in the end had to taste defeat. 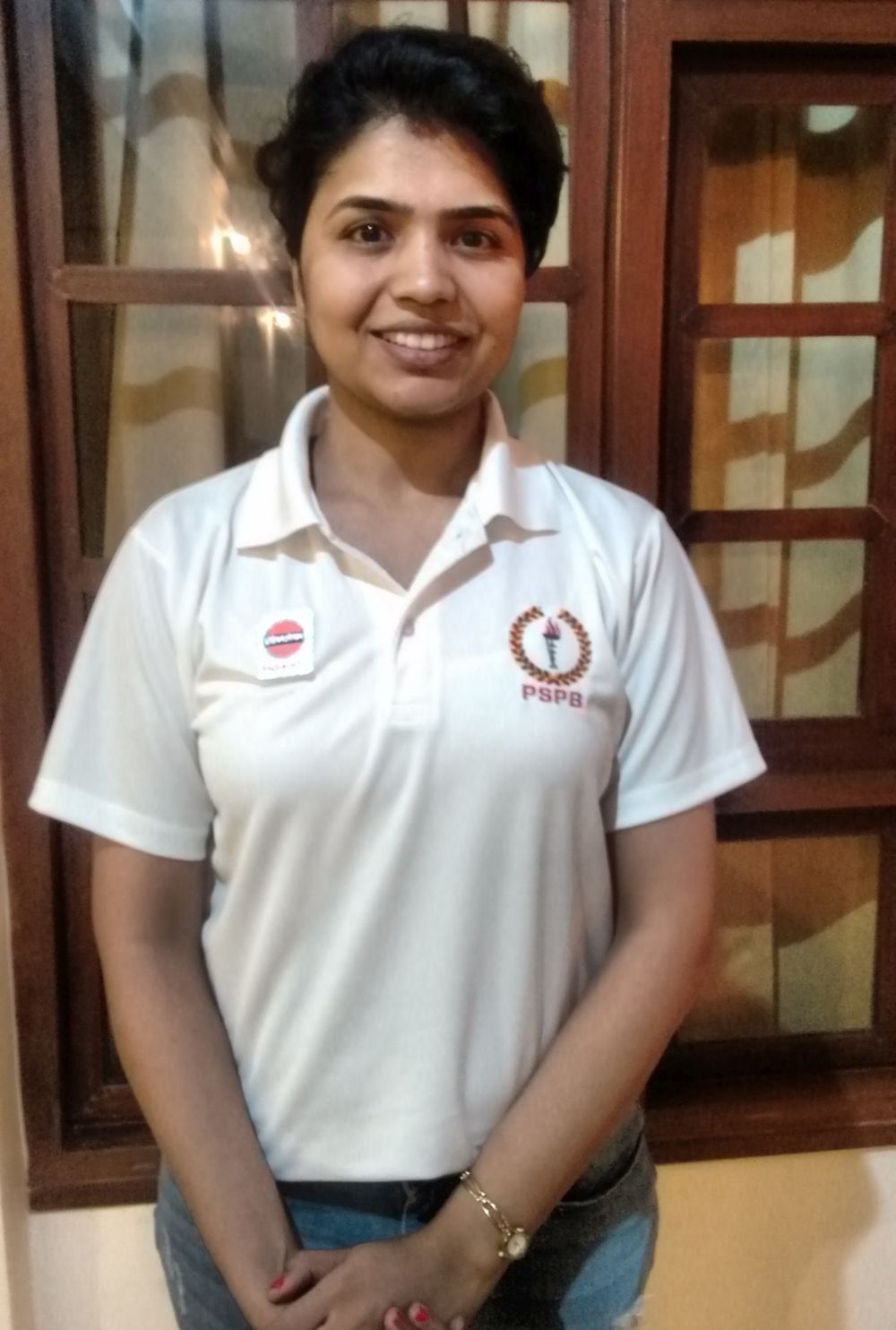 "I think we need a good grandmaster coach and if given that support we can achieve much more success", says Soumya Swaminathan

WGM Soumya Swaminathan, aged 28, an employee with PSPB, a former National champion in 2011,World junior championship title winner in 2009, Commonwealth women's champion in 2012 and had a second place finish in the 2016 Moscow Open. Soumya is one of the top women chess players' in the country, and the top-seed at the ongoing 44th National Women's Challengers Chess championships 2017. Soumya Swaminathan spoke to ChessBase India's correspondent on the side-lines of the tourney here on Saturday.

We have mentioned so many of your feat. What's next for you now?

Soumya: I don't think about that and do not have any specific targets. I intend to play well in the forthcoming competition and put up a good show. I want play fighting and interesting games and work hard for success.

Not really. I concentrated on my fitness and prepared myself mentally with some meditation and yoga sessions before coming to Mysore.

How did you feel after winning the 2011 National championships and followed it up with the Commonwealth title in 2012?

I felt elated after winning the National championships and the Commonwealth title in a row in successive years. I was happy I could play some fighting games and ended up on the winning note.

When was your first Olympiad representation for India and your performance at these top events?

My first Olympiad was in 2012 at Turkey. I started badly in the tournament but came back to win some important games. It was a good experience. In 2016, at Azerbaijan, I played really well and the Indian team finished 5th. I think we need a good Grand Master coach and if given that support we can achieve much more success.

My World juniors win, my National championship win in 2011, Asian games bronze medal are all close to my heart and all of these sum my best performances so far.

About support from PSPB?

They have been giving excellent support and are fantastic and very helpful. I play without pressure and am thankful to them for some splendid support.

I have no specific goals. Of-course, I want to become a grandmaster. I would like to move step by step towards that mark and continue playing some fighting and interesting games to improve as a overall player.

Presently I work on my own. I take specific coaching from GM Abhijit Kunte.

They have been conducting more number of tournaments, but they need to have more women specific tournaments on round-robin basis and introduce chess league. If they provide us with a good grandmaster coach it would be helpful to achieve more success. 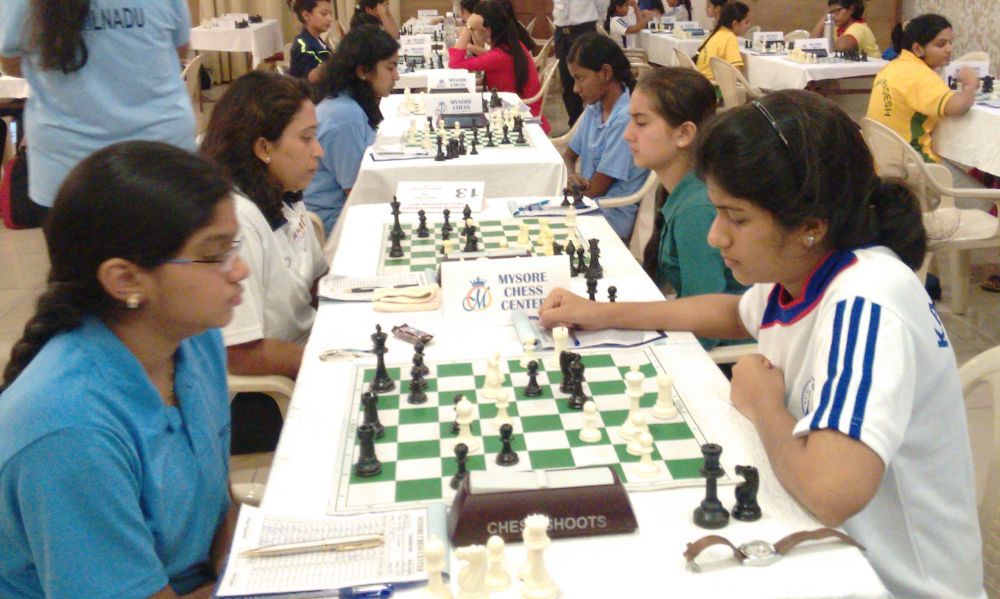 Andria played the Scotch and beat Michelle. Although her opening play was not the most ambitious, it goes without saying that Scotch is a very interesting opening that can be tried against 1.e4 e5. Not only do you avoid the Berlin and other long drawish theoretical lines, but are also able to indulge in fresh positions. Garry Kasparov was one of the biggest adherents of this opening, and when he played at the Saint Louis blitz last year, Scotch was his main weapon. We have an excellent DVD in the ChessBase India shop related to the Scotch, by our very own GM Parimarjan Negi. Being a theoretical expert, Negi is the right person to acquaint you with all the knowledge you need against 1.e4 e5 with white.

WGM Swati Ghate (2.5 points) came back strongly after a drawn game in the second round to register a win against Stuti Bhanot in 54 moves. WIM Rucha Pujari was held to a draw by WCM Jyothsna on the fourth board in 45 moves. 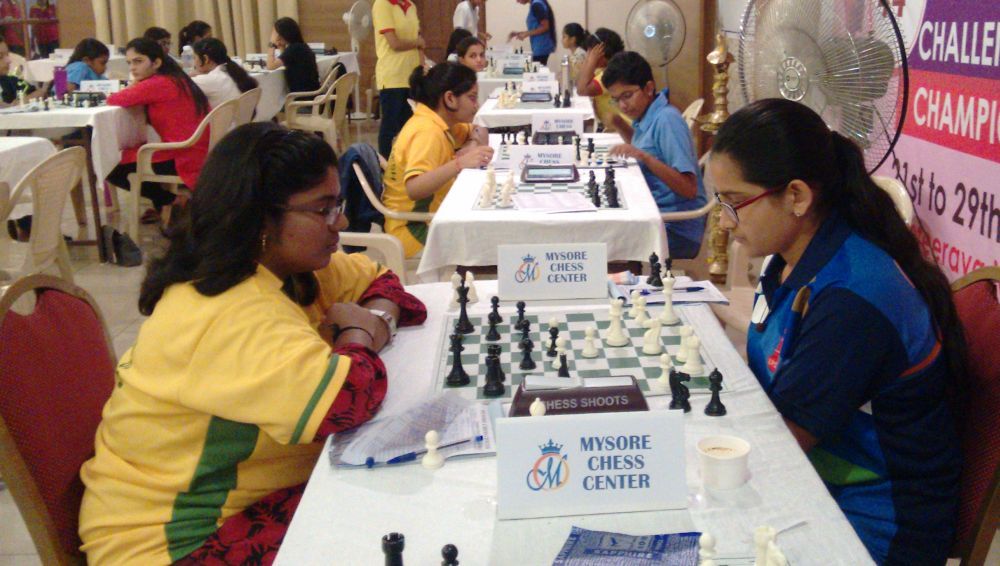 Sanskriti Goyal (right) had a great day. Not only did she beat Pratyusha Bodda in round two, but also managed to hold her higher rated opponent Lasya (left) to a draw.

Here is Sanskriti's win over Pratyusha: 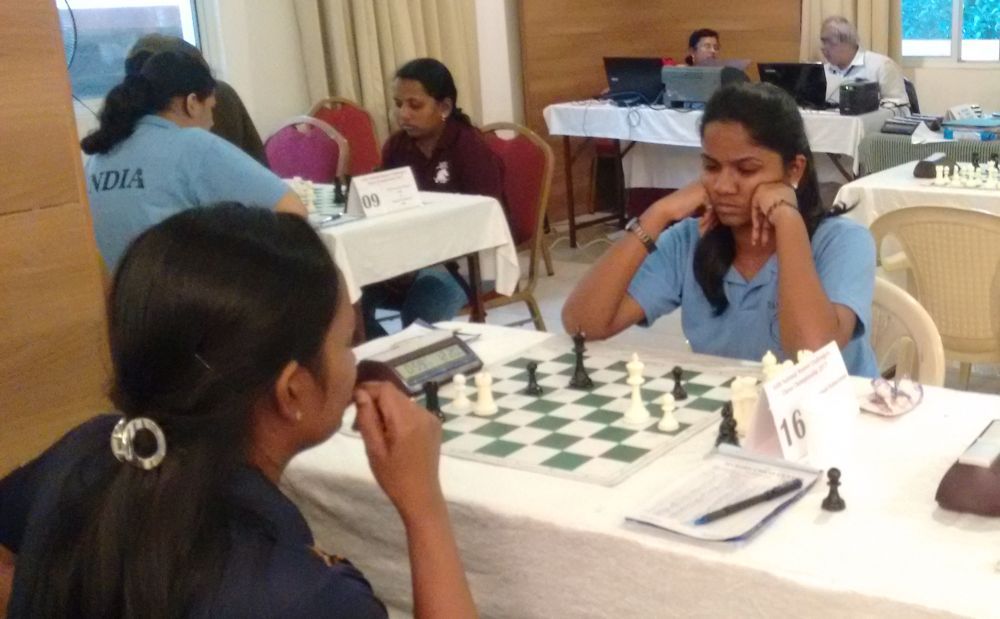 Y. Saranya held two strong players to a draw in rounds two and three. In the morning it was Nisha Mohota and in the evening Meenakshi Subbaraman (left) had to split the point.

In some of the other mini-upsets in round two WIM Nandhidhaa Pv (AAI) was held to a draw by Stuti Bhanot (Har)-rating 1869 in 39 moves. Commonwealth champion WGM Swati Ghate (LIC) was held to a creditable draw by WCM Isha Sharma of Karnataka (Rating 1878) in 47 moves.

Ranking after round three