Vishy Anand on Weekend with Stars

Celebrities, musicians and cricketers have adorned TV shows far and wide on Indian television. But for a non-cinema person to be invited to a talk show is an extremely rare occurrence. On May 21, 2017, in the fourth episode of their first season, Tamil talk show, Weekend with Stars invited the Tiger from Madras, Vishy Anand and gave the audience a comprehensive peek into the life of India’s first Grandmaster. He not only spoke about his chess career but also his personal life. Childhood friends were invited to the show, and there's also a special segment with Aruna. Here's a look into what happened on the show. 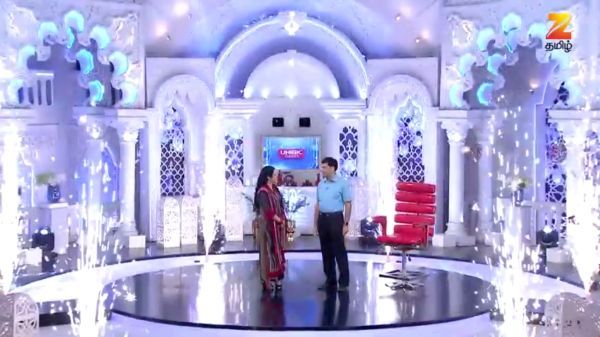 The warm welcome our beloved world champion received
In an hour long interview, the show featured Anand’s journey from making his mark as the “Lightning Kid” to becoming the second player in history to snatch the coveted World Championship title from the tight clasp of the Russian hegemony after Robert James Fischer. Delving into why Anand was named the lightning kid, a quick glimpse into Anand’s early years was presented with a video portrait.

Looking at the footage, Anand was surprised how vividly he could recall his early days: why he wore a particular T-shirt or what he did on a particular day besides the titles he had won, of course. Anand further recalled his days with another outstanding individual from his family – his grandfather, Srinivasa Sastri. Talking of him, Anand said that it was him who always told him to give his exams well since it was “family tradition”. 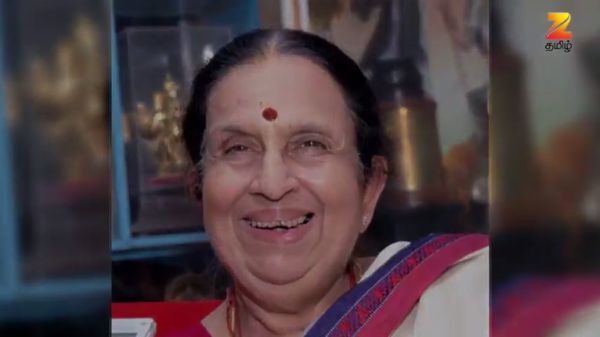 It was almost as if he had four parents while growing up since he was the youngest in the family. But his favourite parent is his mom, Susheela Viswanathan.

Mothers always hold a very special place in our lives. It is no different for Anand. Susheela Viswanathan, his mother, was always there by him through the highs and lows of his chess career. She was the one who took him to tournaments when he was too young to travel. At the same time, she was also the one to recognise it when her boy had grown up and let him travel by himself. She thus took care of Vishy differently at different times.

She would go to the tournaments and Vishy would always know she’s around somewhere but she wouldn’t be within visual range. She would say “You play by yourself, concentrate, do your thing”. She would take him to tennis coaching at 5.30 a.m. and go with him to every chess tournament and watch quietly. But it would never be direct since she wanted her boy to be independent.

Recalling the time when he had begun travelling alone, Vishy said his mother would call him to know his tournament results since she couldn’t wait until he was back home. When he couldn’t answer her calls, she would taunt him saying, “Oh you big star. You’ve forgotten me now”. Anand admitted that he was always scared of this and would make sure to call her as soon as he was done with his game. Adding to this further, he said, “Another thing is, it’s been 2 years since she passed away. Last year one night I jolted out of my sleeping state and went ‘Oh God, I forgot to call mom! Oh, wait she’s gone.’ It was such a habit. Now since she was also a player, she followed my games till the end. She would always take the results from someone. Somebody had to call her and text her about the proceedings like live reporting.”

A special message from a special fan 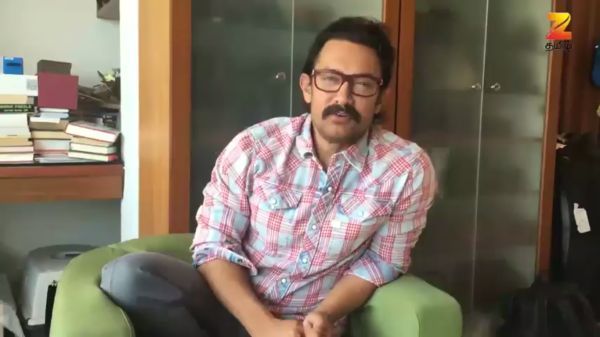 Anand also had a special message awaiting him from one of his very special fans!

Well, I always was a chess enthusiast. I learnt the game when I was about 6 or 7 maybe when my Grandma taught me. Since then I’ve been in love with the game. I thoroughly enjoy the game and in the papers when I started reading about this young boy Viswanath Anand, he caught my attention and I started following him. It’s kind of a coincidence we started our careers together. In 1988, my first film released – Kayamat se Kayamat Tak – and Anand became Grand Master. If I’m not mistaken, he’s the first grand master from India. And then finally when he became World Champion, it was a moment of such joy and pride for all of the chess enthusiasts from India. It was really amazing to know our guy was up there ruling the world; it was really tremendous and so inspiring."

"First time I met him I carried my chess board and asked him to sign it. I’ve always been a huge fan and then I met him and wife Aruna and he was kind enough to play a game of chess with me; he was humouring me I guess but he’s someone who has all the qualities of a true chess champion. He’s passionate, in love with what he’s doing and that’s where the hard work and dedication comes in. Other than that he’s a very fine human being. Hard working, well read, unassuming. I mean here’s a world champion and he’s so unassuming. He’s a role model for me. I think is a role model for all young kids across the country - my best wishes and admiration always." 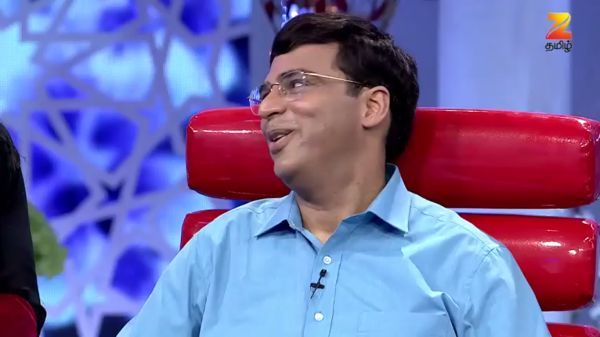 Anand’s reaction seeing Aamir Khan’s message for him!
Seeing Aamir’s message for him, Anand said he was just flattered and didn’t know how to react. Further, Anand told about one of the many times he had met Aamir saying, “In Nov 2001 I had just come back as World Champion. I went to Mumbai and was giving a lecture about chess showing one of my games and there he was! I was like ok Aamir Khan plays a bit of chess to have him in the audience was very nice. But after I showed the game from a technical standpoint, he asked two or three questions. In fact, he was the only person who asked any questions. He actually knew the game and was genuinely an enthusiast. He immediately got what I was talking about. After this, we met on several occasions and even played some games for charity.

Aruna has been one of the most important parts of Anand's life. She is not only his wife, but also her manager and ensures that the champion remains insulated from the outside world during his tournaments. At the show, Zee Tamil did something novel. 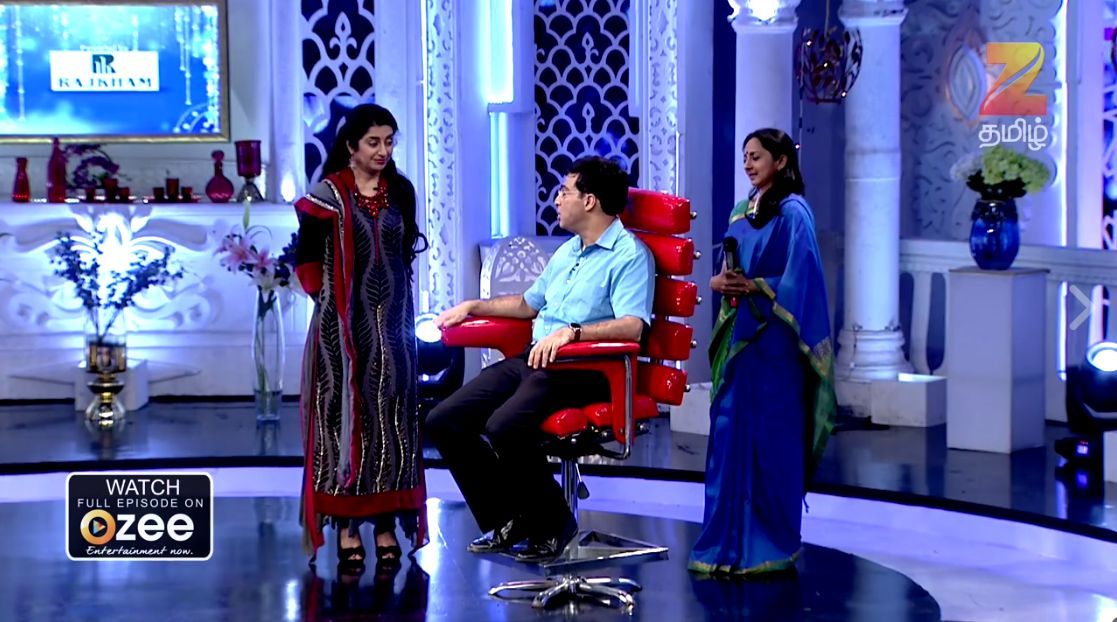 They asked Anand to speak about Aruna, while the latter stood behind him. Anand was unaware about this.
Anand said that the thing that he loved about Aruna was her patience. They went for their honeymoon to a chess tournament and Aruna knew absolutely nothing about chess. Yet within a year she had absorbed everything in the chess field around her. This was simply mind boggling. 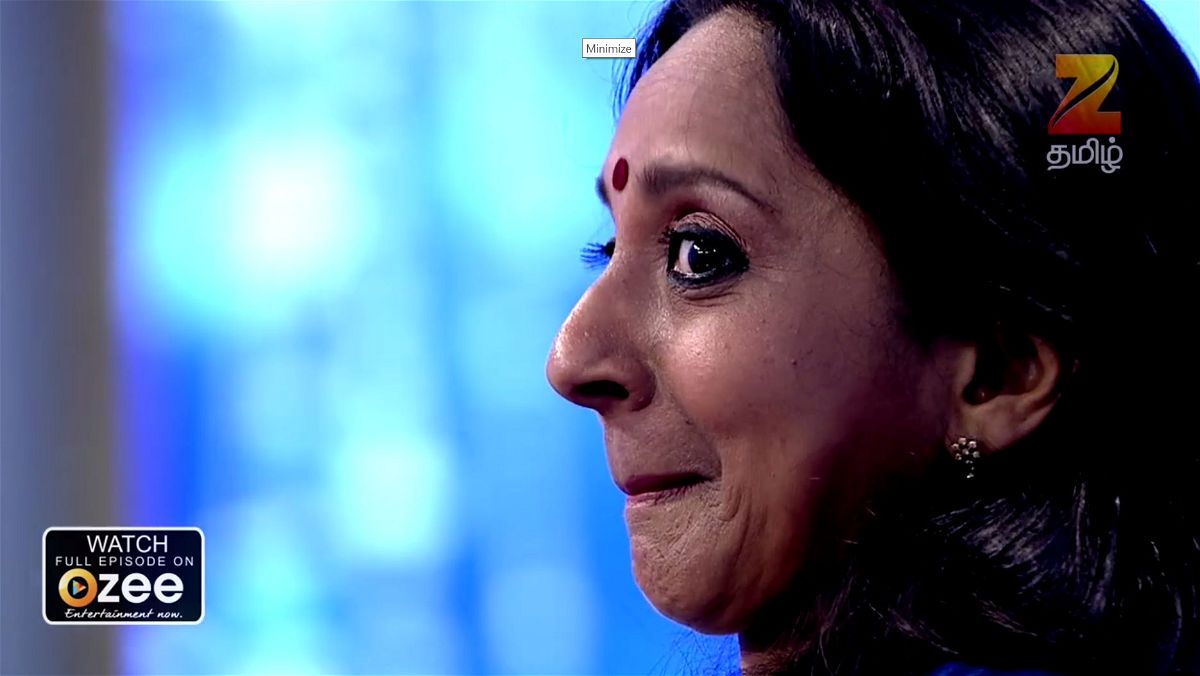 Aruna standing behind Anand's chair and listening to everything! 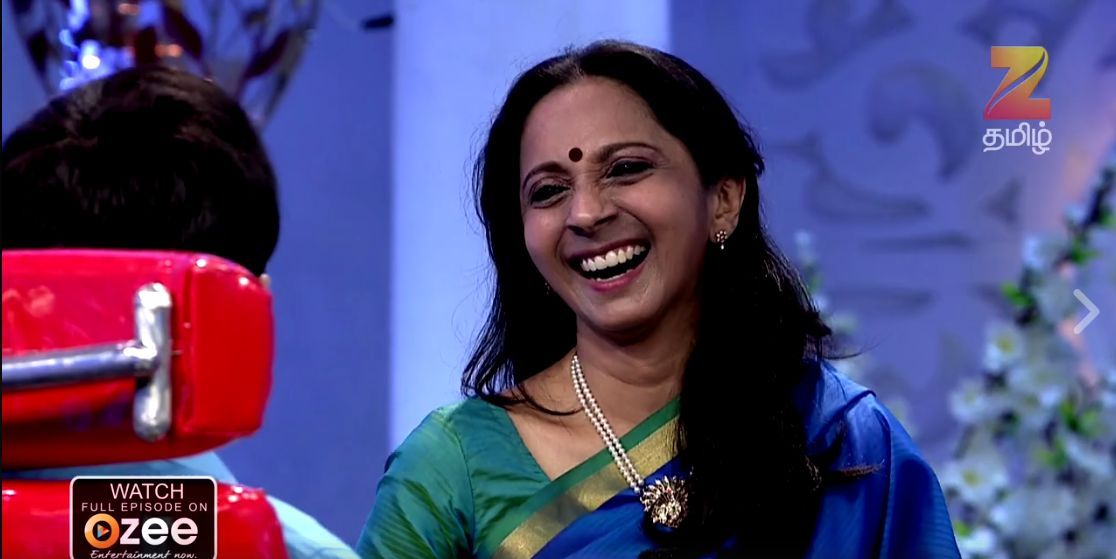 Laughter all around, when Anand turned his chair and came to know that Aruna was listening to everything that he had said! 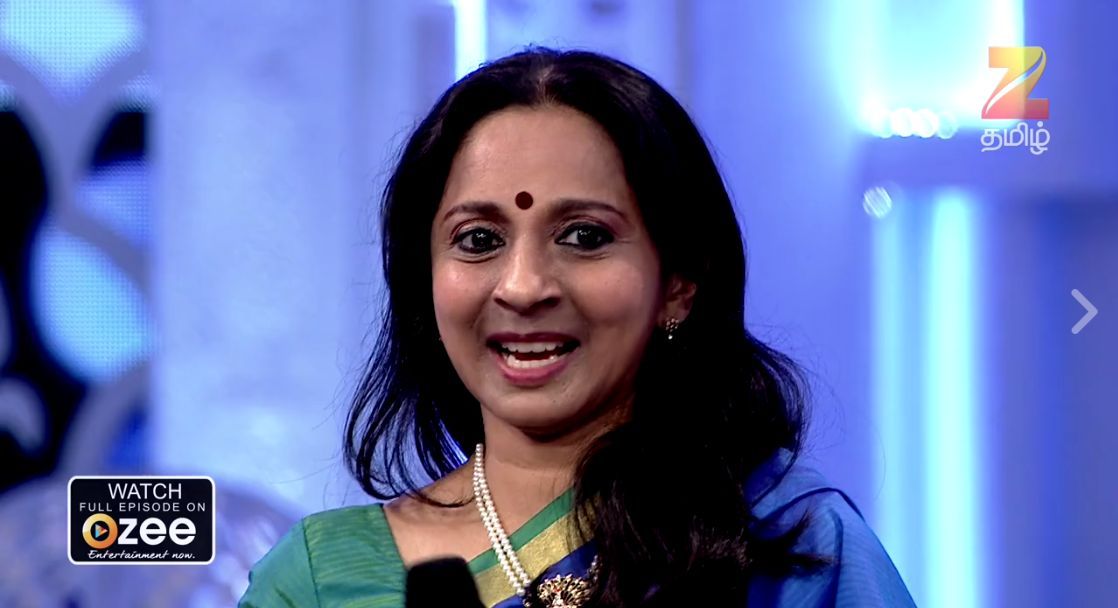 Aruna then spoke about 1995 when they got married!
Says Aruna, "Anand was a celebrity at that point. He had just played his match with Kasparov and was world number two. But when I met Anand I just couldn't believe it was him. He was just so simple."
Aruna further added, that it was a coffee and juice that had decided her marriage to Anand. "Anand came home to see me. My mother had made all the preparations and offered him coffee. Ater finishing the first when he was asked for another coffee, he said yes! That's when my mother took me to the kitchen and said, you have to marry him!
"After some days my brother came to my office and took me to a restaurant. He said what would you have. I took a juice. While having the juice he said, you must get married to Anand. So you can say coffee and juice, these two drinks and I got married to Anand!" 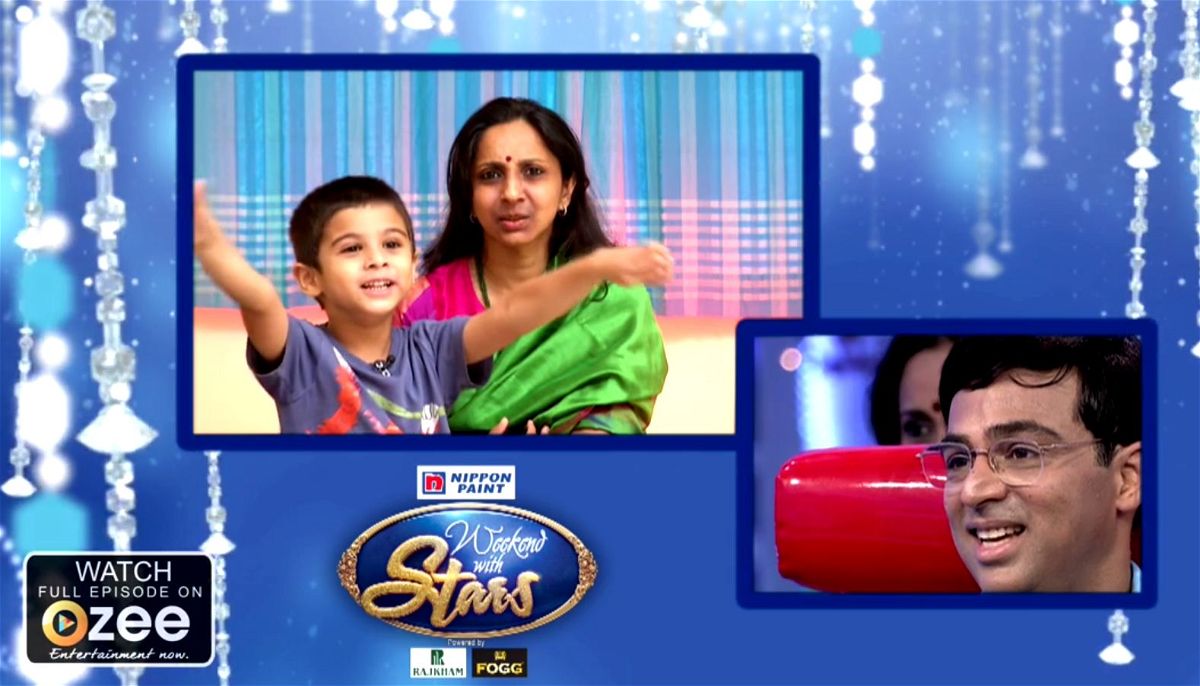 Anand's little bundle of joy, Akhil. What does Akhil do at night with Papa? Pillow fight!
Although the below six-minute segment is in Tamil, it is sure to bring a smile to your face!

When friends joined the party!

A few of Anand’s childhood friends also joined the show and had some really interesting stories from his school and college days. 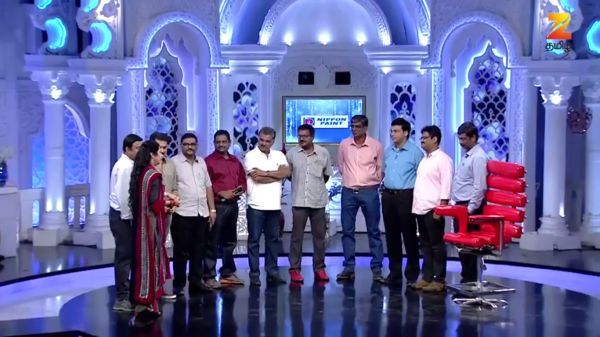 Vishy and his gang! 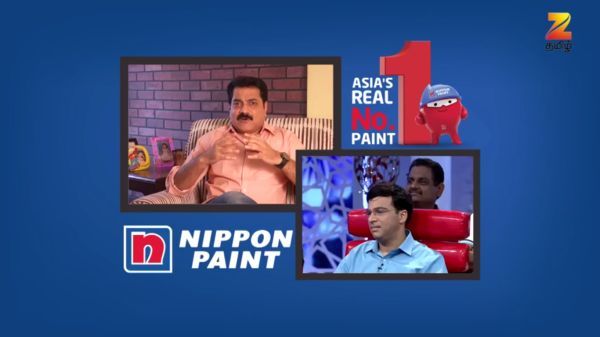 Vishy’s friend tells how, just like any other student, Vishy too had once bunked his class and was out to watch a movie with his mates.
"We bunked school in 11th and went to watch the movie Blue diamond. And all of us got caught. V.V. Abraham was our Principal. Since it was a mass bunk, he found out. As soon as we thought it would be a big problem, he realised that you were in the same class and ONLY because of that reason did we get saved that day! In a nutshell, it’s been a fantastic experience having you as a part of our life and we being a part of yours.” 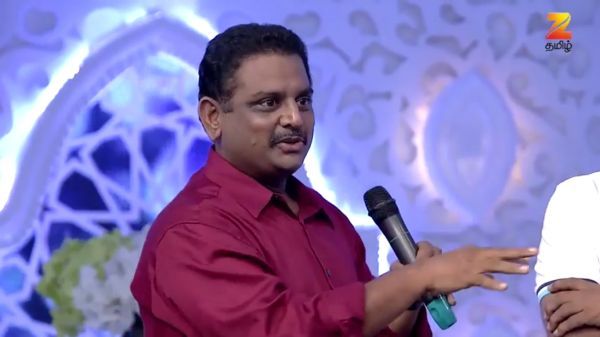 Believe it or not, Vishy actually replied to one of his friends' text message DURING a World Championship game!

"There was this championship recently that he was playing in and I think in the middle of the game, he had a move. The same time I chatted with him saying why this move and not that? And unexpectedly got a reply from him DURING the match! He replied to me while playing the world championship."

Commenting on this, Vishy said, “Well if a school classmate is texting, you got to reply no matter where you are!” (laughs) 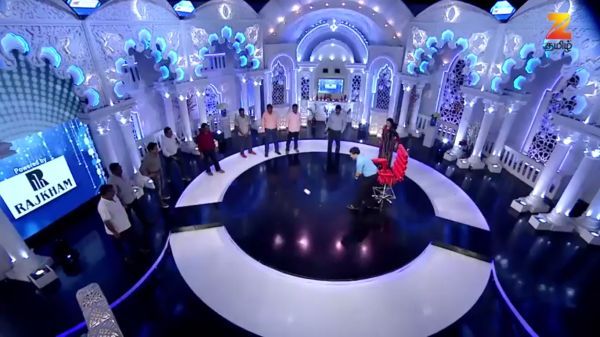 Vishy and his friends had their own version of cricket at school which they called crocket. The difference was that instead of running straight, the batsman had to run sideways to score runs. And unlike cricket, crocket is played with a baseball bat and a softball. 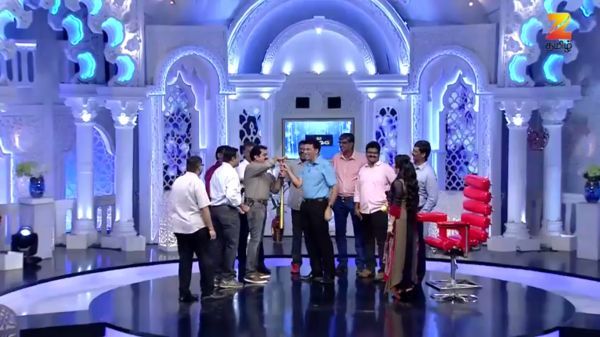 The toss, too, isn’t your regular coin flip toss 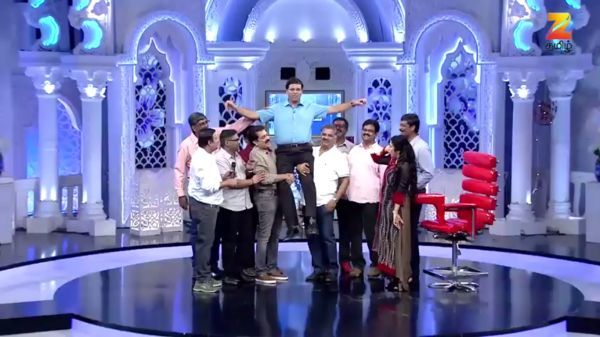 That’s how the Don Bosco boys cheer for their school mate! 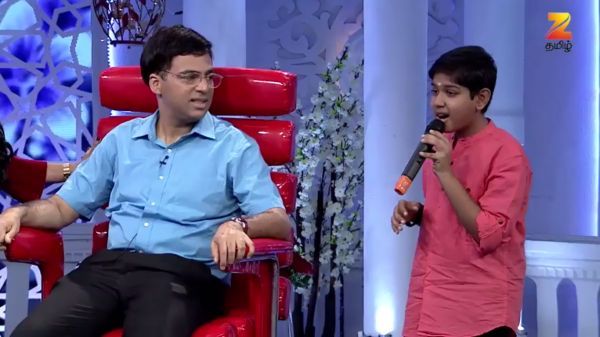 A soothing song performance ended the evening
Chess players in India aren’t as popular as movie stars or cricketers and, as mentioned before, it isn’t very often that one gets to see such a comprehensive portrait of someone from this field. ChessBase India would, therefore, like to thank the team of Zee Tamil for this amazing talk show which gave the general audience a glimpse of the mighty Vishy. If you would like to watch the full episode in Tamil, you can watch it here.