Happy Dussehra to all our readers!

Vijayadashami is a popular Indian religious festival among the masses with many parts of the country witnessing grand celebrations. Kolkata is popular for its Durga Puja. But another city that leads the festivities is Mysore, the cleanest city in India. R.Anantharam, a regular contributor to ChessBase, was the chief arbiter at the Viktor Korchnoi Memorial Tournament that finished some days back. He sends us a report on the tournament, plus a brief tour of the famous Mysore Dasara!

Happy Dussehra to all our readers!

A combination of chess and Dasara festivities was a feast for the participants of the Viktor Korchnoi Memorial FIDE-rated chess tournament, organised by Mysore Chess Centre at Paradise Hotel, Mysore. Though it had a relatively lower strength of 163 participants as it clashed with many tournaments and other unforeseen reasons, players enjoyed a healthy competition in a good environment and playing facilities.

IM Ravi Hegde of Karnataka and Maharashtra’s Rucha Pujari headed the seeding list as the top two players respectively. Ravi Hegde played true to his seeding to win the tournament without much ado, though he lost to Rucha Pujari in the process. 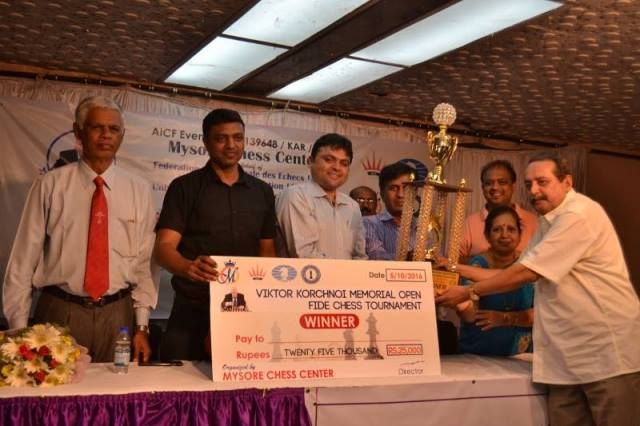 Seventh-seeded local lad L Vivekananda was beaten by unrated Vashishtha Ankesh of Rajasthan in the inaugural round. Two more rounds progressed without any upset and in the fourth round, World Amateur (under-1700) gold medallist and Karnataka state junior champion SN Jatin of Mysore got the better of third-seeded Balkishan of Karnataka.

After five rounds, IM Ravi Hegde emerged the sole leader, as the co-leaders Rucha Pujari and Jatin were held to draws by their respective opponents VPS Darshan of Mysore and Santosh Kashyap Hg of Karnataka. 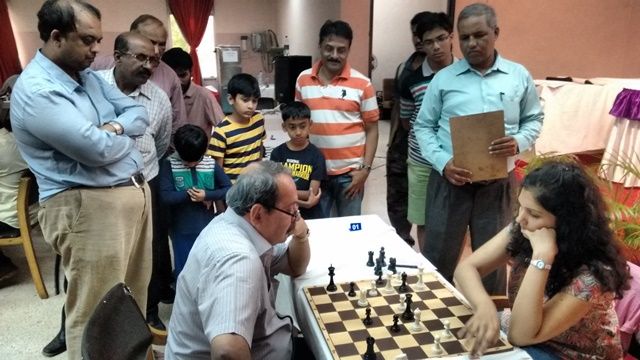 WFM Rucha Pujari shocked IM Ravi Hegde to surge ahead. Organiser Nagendra M, a keen chess lover, and player is at the left.

In the clash between the two titans of the tournament, Ravi Hegde was cruising ahead; but Rucha Pujari defended well to reach a drawish position when Hegde blundered (Rucha was under time pressure then) to lose the game. This allowed Rucha to claim the pole position with 5.5 points after six rounds.

Rucha was held to a draw by fourteen-year-old cool-headed Prasant N Nayagam of Tamil Nadu whereas Snehil Deota and Sushrutha Reddy of Karnataka, and Abhirami Madabushi of AP, scored wins in the seventh round to join Rucha in the lead.

Ravi Hegde and Abhirami maintained their winning trend in the eighth round to reach the final round as co-leaders. Ravi defeated Deota and Prasant pulled down Abhirami to a draw, helping Ravi to emerge a clear victor in the Viktor Korchnoi tournament. 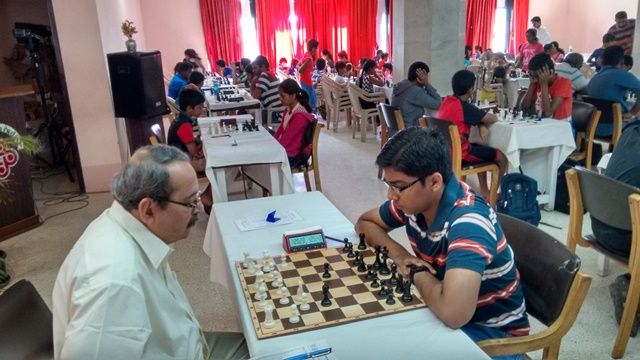 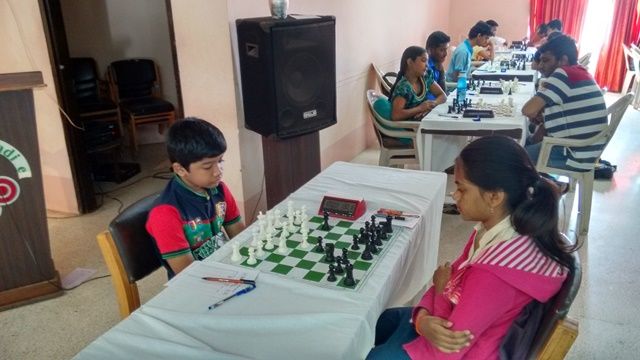 Abhirami drew with Prasant N Nayagam in the final round 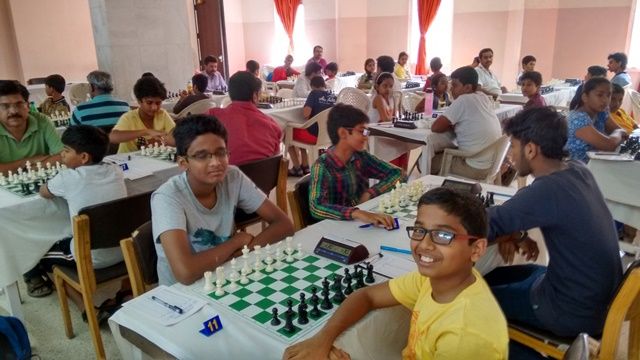 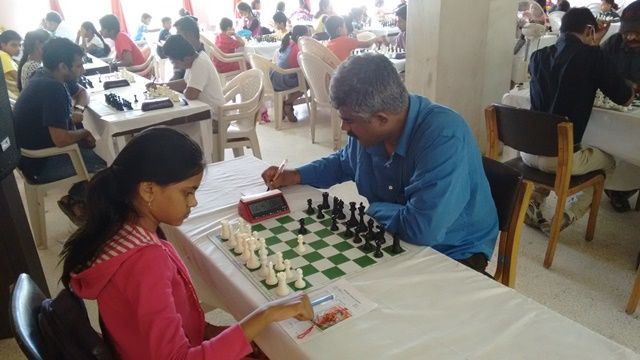 Sushrutha Reddy was beaten by Abhirami 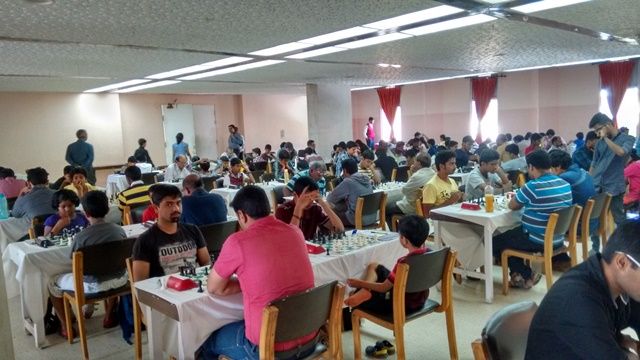 A section of the playing hall 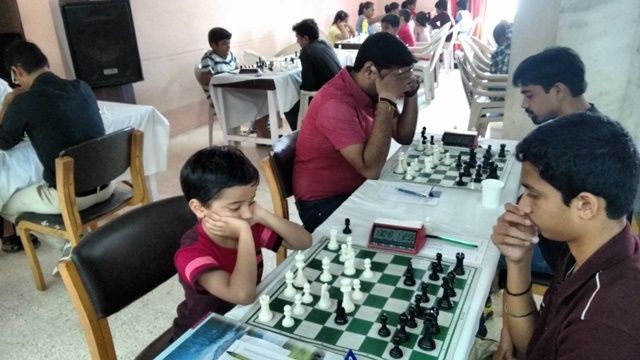 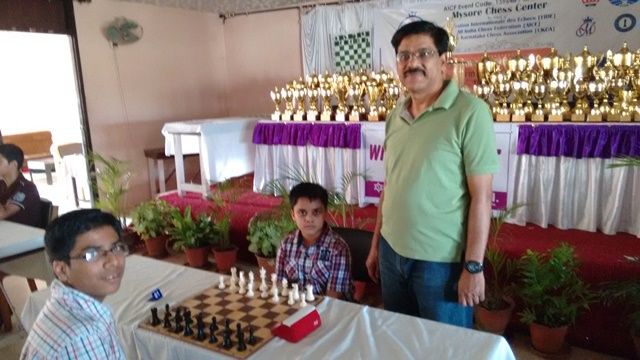 [Editor's Note: Vijayadashami is a religious festival in India and may be called Dussehra, or Navami, as well. In South-India, the festival is usually spelt 'Dasara'.]

Dasara festival, celebrated with pomp and gaiety in the city of Mysore is popular all over the world. The salubrious climate and trees and parks on the flanks of the roads is reminiscent of Madrid in Spain. The majestic palaces and royal mansions, beautiful flora and fauna attract the tourists to throng to the city, situated about 140 KMs from Bangalore.

The Dasara festival is associated with many cultural events daily, food mela, sports activities, etc. A two-day chess tournament is also a part of the sports event.

The illuminated palace is the centre of attraction during the festival 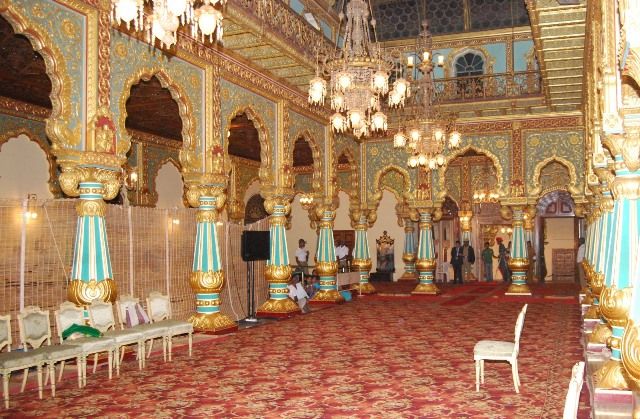 A section of the inner view of the palace 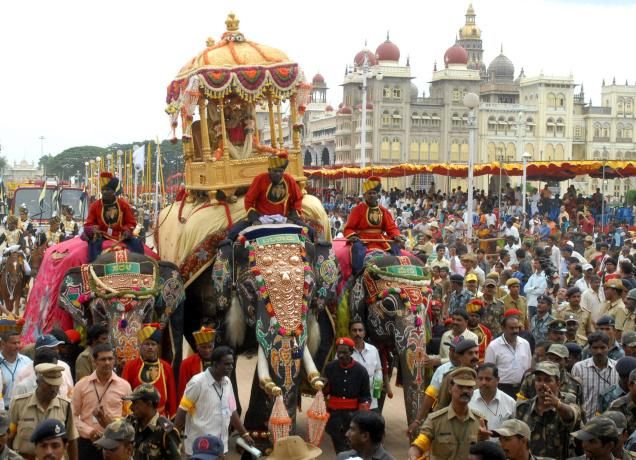 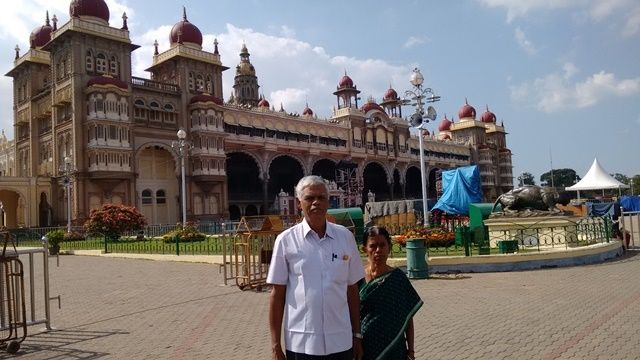 I worked as the chief arbiter in the event, and here I am standing with my dear wife. 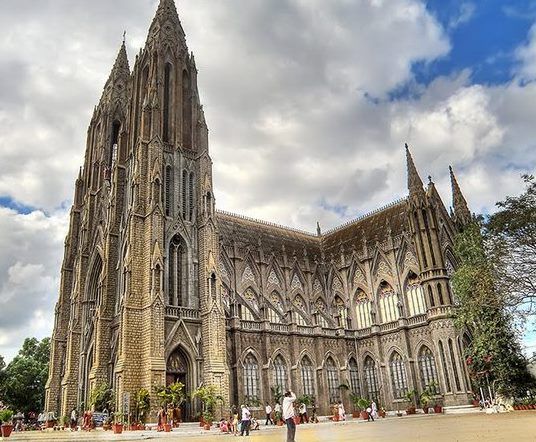 Prof. Rathinam Anantharam first A grade arbiter from India has served as chief arbiter in three World Junior chess championships, World Schools and Chess Olympiad for physically challenged, besides many Asian and international events. He is a Councillor in the Arbiters’ Commission, FIDE and also the Chairman of Arbiters’ Commission of All India Chess Federation. He is also a member of Qualification Commission and Pairings Commission in FIDE.