On 4th of December Timur Gareyev played against 48 opponents in a blindfold simul that lasted nearly 20 hours to set the world record in simultaneous blindfold chess. Miguel Najdorf's record of 45 opponents was broken by Mark Lang after 64 years in 2011 by playing 46 people. Timur went two steps ahead and challenged 48! He ended the simul with a staggering 35 wins. It was truly an exhibition of unbelievable human strength and stamina. Albert Silver tells you the tale of how it all transpired.

Aside from the World Championship title itself, nothing in chess quite seizes the imagination of the general public as blindfold chess. Tell a non-player you can play a game of chess blindfolded, and you are instantly classified as some sort of mad genius.

During the first half of the 20th century, there was a rush to break the record for the most blindfold games at a time, starting with the great Harry Pillsbury, who set the standard with 20 boards in 1900. The record was increased at alternate intervals by two champions vying for that final word in blindfold records: Richard Reti and Alexander Alekhine, who step by step raised the number to 32 boards. George Koltanowski claimed the record at 34 boards, but was soon surpassed by the brilliant Miguel Najdorf. 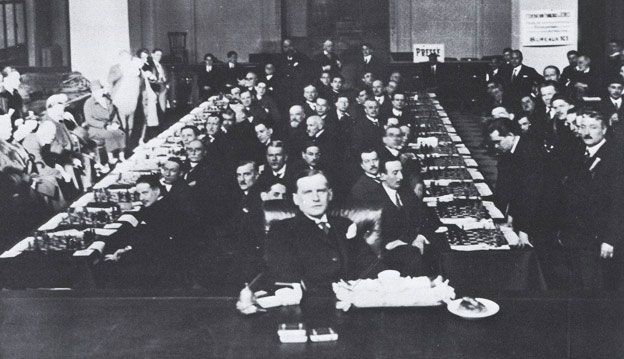 Alexander Alekhine, 4th world champion, is regarded as one of the strongest blindfold players ever

In 1939, while playing a tournament in South America, Najdorf had learned of Hitler’s invasion of his country, and with his fellow (Jewish) team mates, chose to stay in Argentina. Seeking to reach out to his family, of whom he had no news, he construed that news of a world blindfold record would be carried by newspapers around the globe, and seeing this news, any surviving family would know he was well, and seek him out.

In 1943, he broke the previous record with a fantastic 40 boards, but with no happy end. Having already learned of his wife and child’s demise before 1945, he still hoped to connect with family and friends, and in 1947, established a new record with 45 boards in a massive display in São Paulo, Brazil. 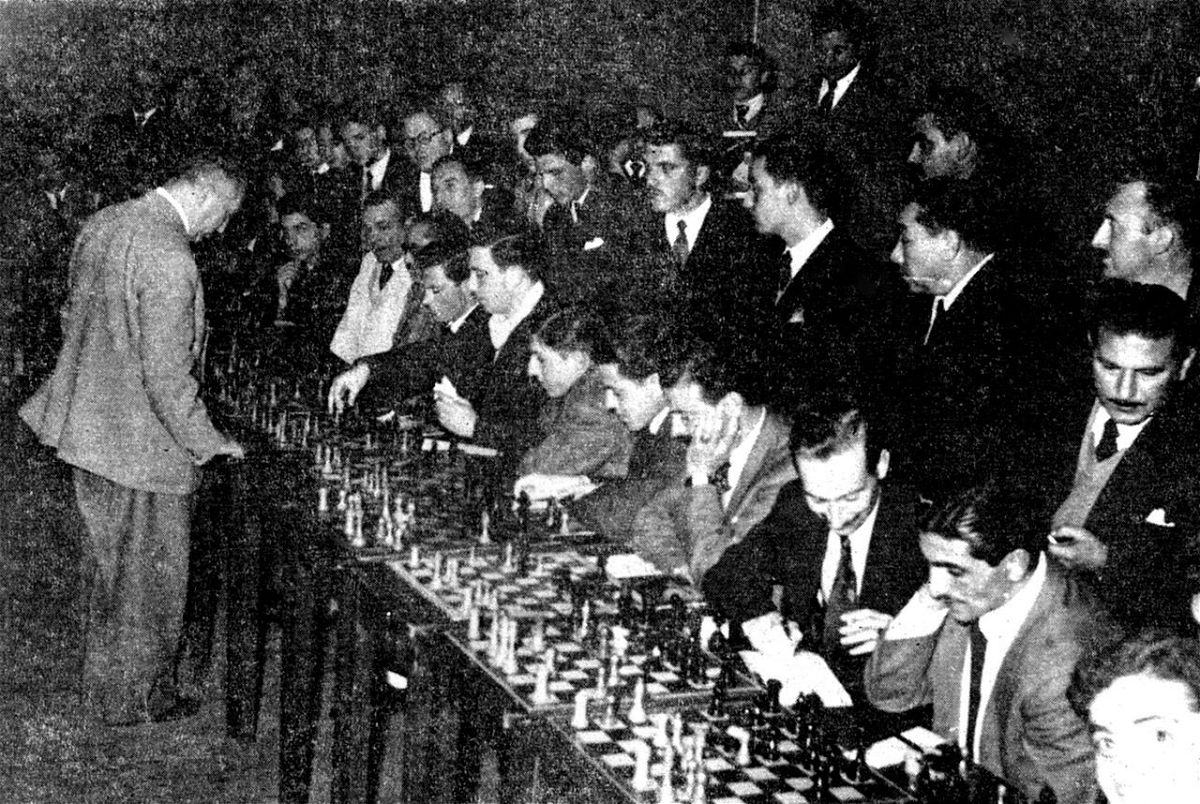 Miguel Najdorf giving a simul in 1955

The number of 45 boards was such a high standard that for decades none came close and the few claims to have broken it, such as Janos Flesch, were soon cast in doubt due to dubious conditions uncovered later. Thus Najdorf’s great record stood for 64 years, until a German master, Mark Lang, finally one-upped the feat after months of preparation, raising the bar to 46 boards in 2011.

However, another player also had his eye on Najdorf’s record: the ebullient free spirit Timur Gareyev. Hailing from Uzbekistan, the US-based chess grandmaster had made a name for himself with off-beat articles sharing his passion for life doing skydiving, globetrotting, and eventually blindfold simuls. Realizing he had an obvious talent for it, and their popularity, his displays were soon in regular demand, with newspapers gobbling it up, describing the ‘flip-flop wearing, exercise bicycle pumping, blindfold player’ as a vision of admiration and astonishment never to be forgotten. 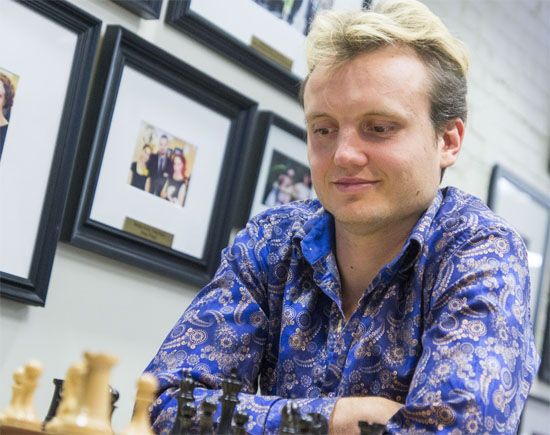 After years of making the rounds with his blindfold displays, Gareyev announced his plan to officially break the record early in 2016. While he raised funds for the event, he also began serious preparation for this huge undertaking.

One might assume that those who perform such feats of intellectual extremes are also endowed with superhuman abilities such as a computer-like ability to calculate, or a memory that will recite a license plate seen 12 years earlier, the truth is that extensive specialized preparation is involved.

Playing ten boards for a player of his skill (he peaked at world no. 68 in 2013) might be attainable without such hard work, but not the record-breaking number he hoped to achieve. Gradually, his public displays grew more ambitious, with 20 boards and more, and he also regularly met with memory specialists such as James Jorasch, founder of the Science House in New York, who is a regular participant in the World Memory Championships. Jorasch is quick to explain that this is thanks to mastery of specialized techniques such as Memory Palace, and not some winning ticket in the genetic lottery he was lucky enough to be born with. 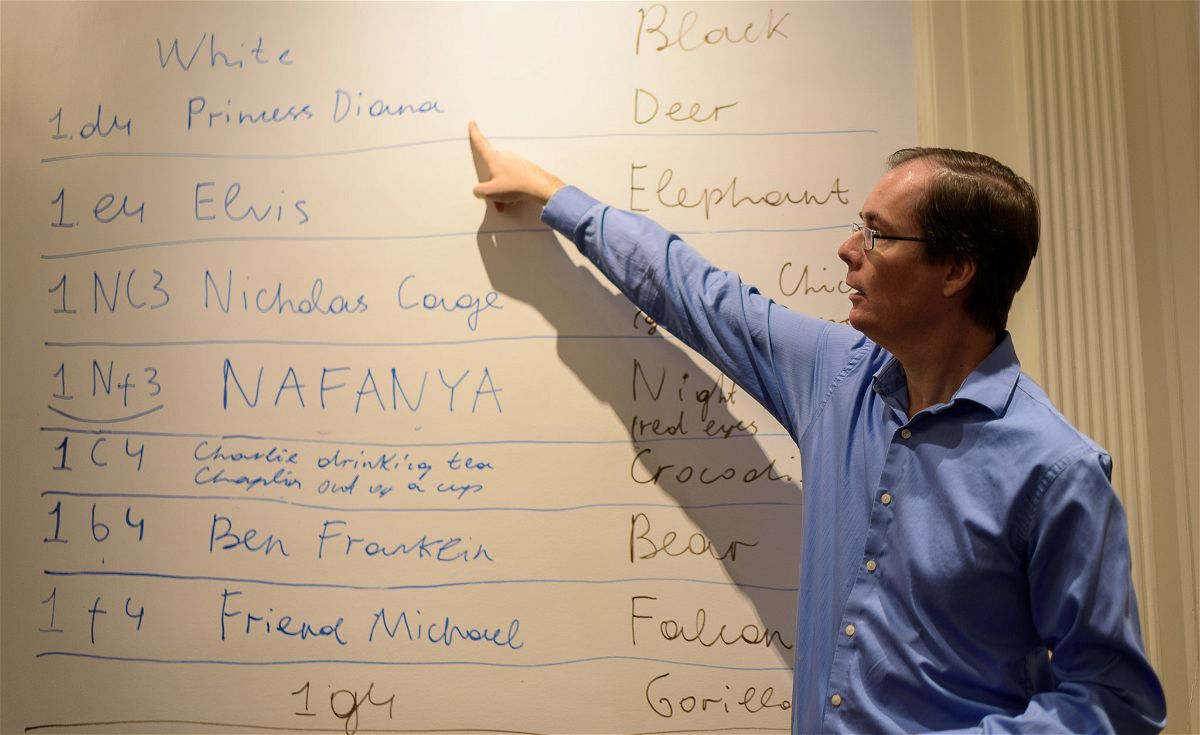 James Jorasch of the Science House coached Timur Gareyev to help prepare him for the challenge. (photo by Albert Silver)

One of the unexpected obstacles, Gareyev and Jorasch explained, is the very first moves played on the board. At first sight, this is counter-intuitive and one would think that 40+ complex boards would be the greatest challenge. However, they clarified that the difficulty at the start is possibly greater because so many of the boards are either identical, or nearly identical, due to repeated opening moves. There is a serious danger of confusing one board for another, and that is where techniques such as Memory Palace can be of enormous help. In fact, accounts of Pillsbury’s records in 1900 describe difficulties he had precisely at this opening stage. 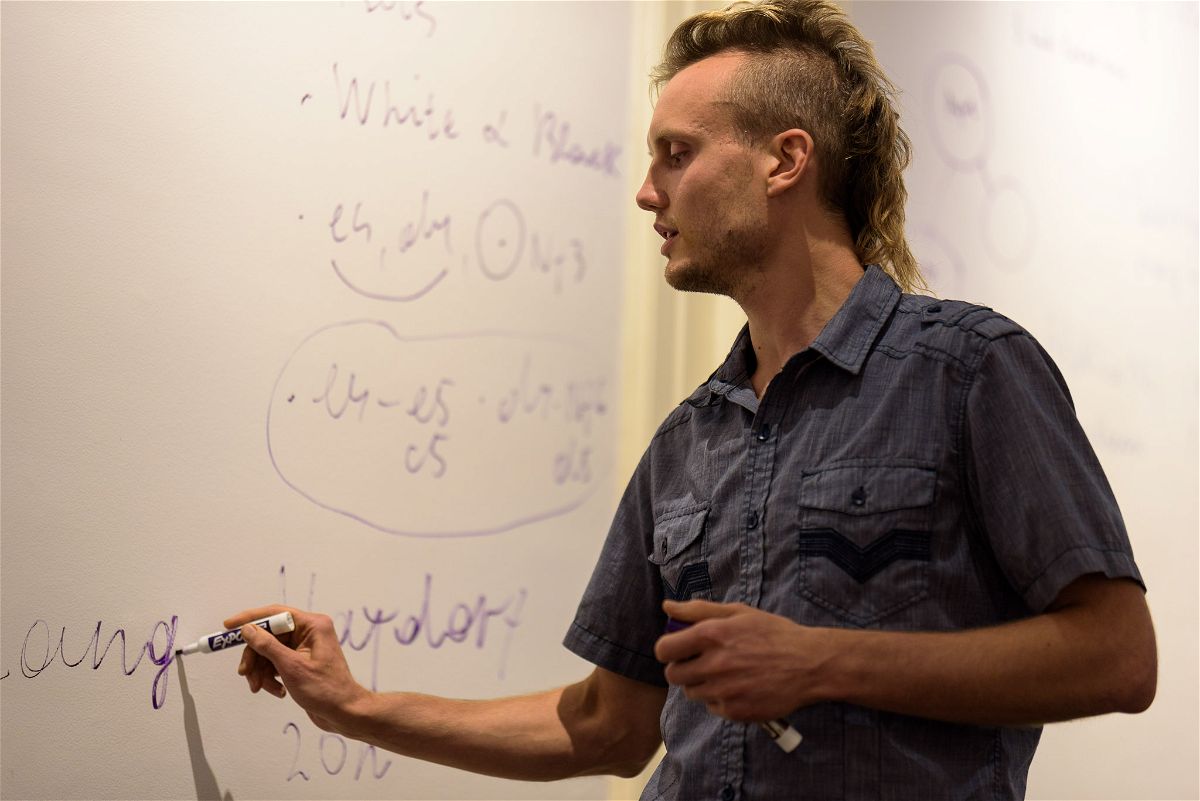 With displays of 20, 25, and 35 boards, Gareyev showed he was ready, and the date was set for December 3, 2016 in Las Vegas. Players from the Las Vegas area, as well as around the country, and even a few around the world via online connections were brought in, and the show was set up for an incredible 48 boards. As a form of full-circle in history, one of his online opponents was the inexhaustible chess enthusiast, 92-year-old Luciano de Nilo Andrade, who is the last surviving participant from Najdorf’s original record from 1947.

Luciano Andrade often described his experience of that original record nearly 70 years before, and upon learning of Gareyev’s plan to establish a new one had expressed a fervent desire to be a part of it. Due to his advanced age, Timur made allowances for him to participate via the online server Playchess.com, and with the assistance of the author, dream became reality. 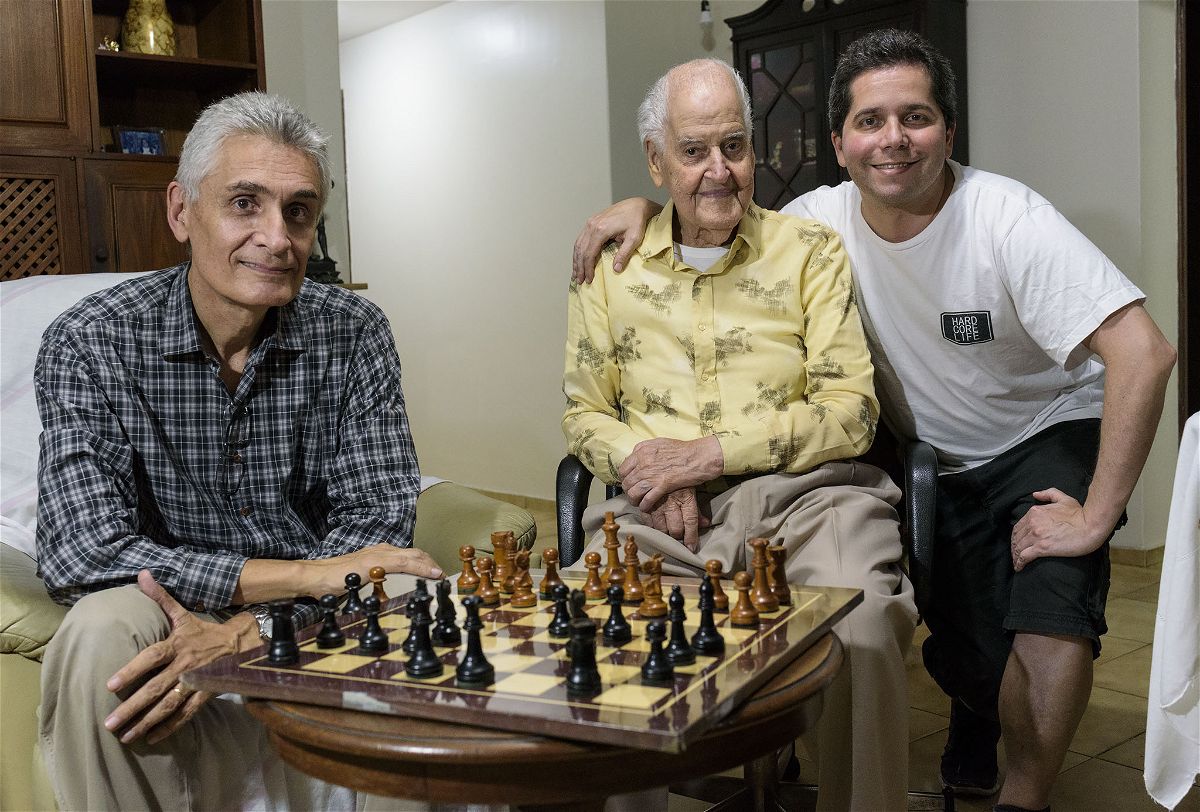 92-year-old Luciano Nilo de Andrade, the last surviving participant from Najdorf’s 1947 record, participated in the 2016 record, accompanied by friends FM Alberto Mascarenhas (left) and Albert Silver (right). (photo by Albert Silver)
In this quick scene, with the simul already underway, Luciano was shown his image and participation shared on Facebook, which he quickly showed his nurse. He is heard commenting that the photo does not do him justice, though he knows he is no model.

The entire event took place in a large hall, with a live video broadcast on Twitch TV with multiple cameras and commentary by host Jay Stallings, and players tuned in from all over to watch the amazing feat. The event was organized by Jennifer Vallens of Off da ROOK as organizer sponsor, without whom none of it would have taken place. 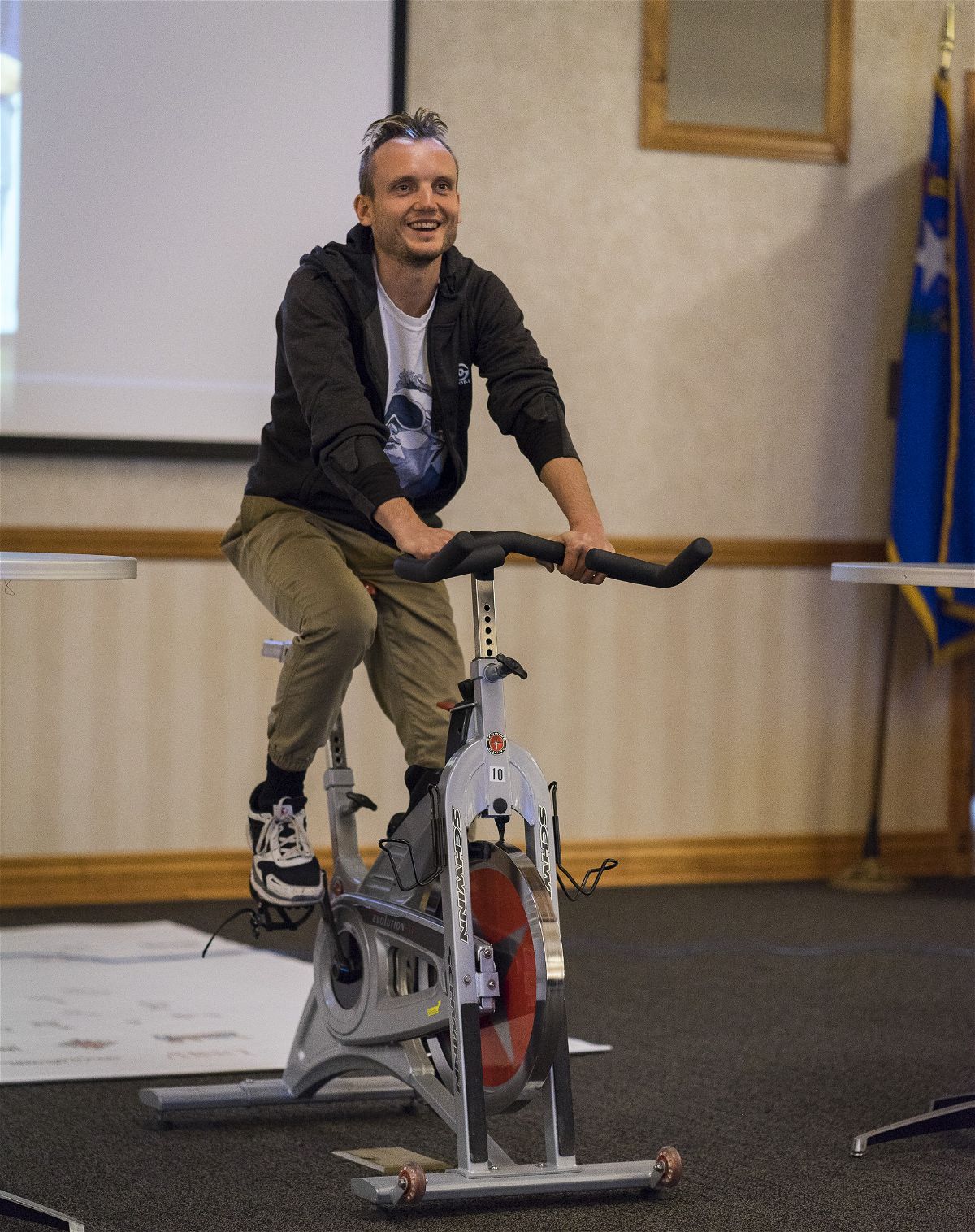 Timur Gareyev always conducts his blindfold simuls from an exercise bike. It is not meant as a gimmick, and he explains it helps him. (photo by Lennart Ootes)

Cycling away on an exercise bicycle as he played, which he explains helps him feel in touch with his surroundings, Timur Gareyev was heard announcing his moves board to board. All the while, he gesticulated with his hands and arms, working out visual images for each board and move in his mind. The moves took considerable time to make the rounds at first as he clearly worked to fixate the games and positions into his mind.

All seemed to be going smoothly until a moment of horror and concern took place after seven moves: a loud and persistent fire alarm was set off, interrupting the proceedings. Players left the area, and a visibly frustrated Gareyev was helped out. Was the record attempt going to be aborted? The penetrating sound lasted for a full ten minutes, overheard on everyone’s computer as they watched it live, all during which he never took off his blindfold. Finally, the noise stopped, later revealed to have been caused by burned food from the kitchen, and he got back on his exercise bicycle. After seeing him resume all the boards as if nothing had happened, flawlessly citing board numbers and player names, no one had any doubt he would succeed. 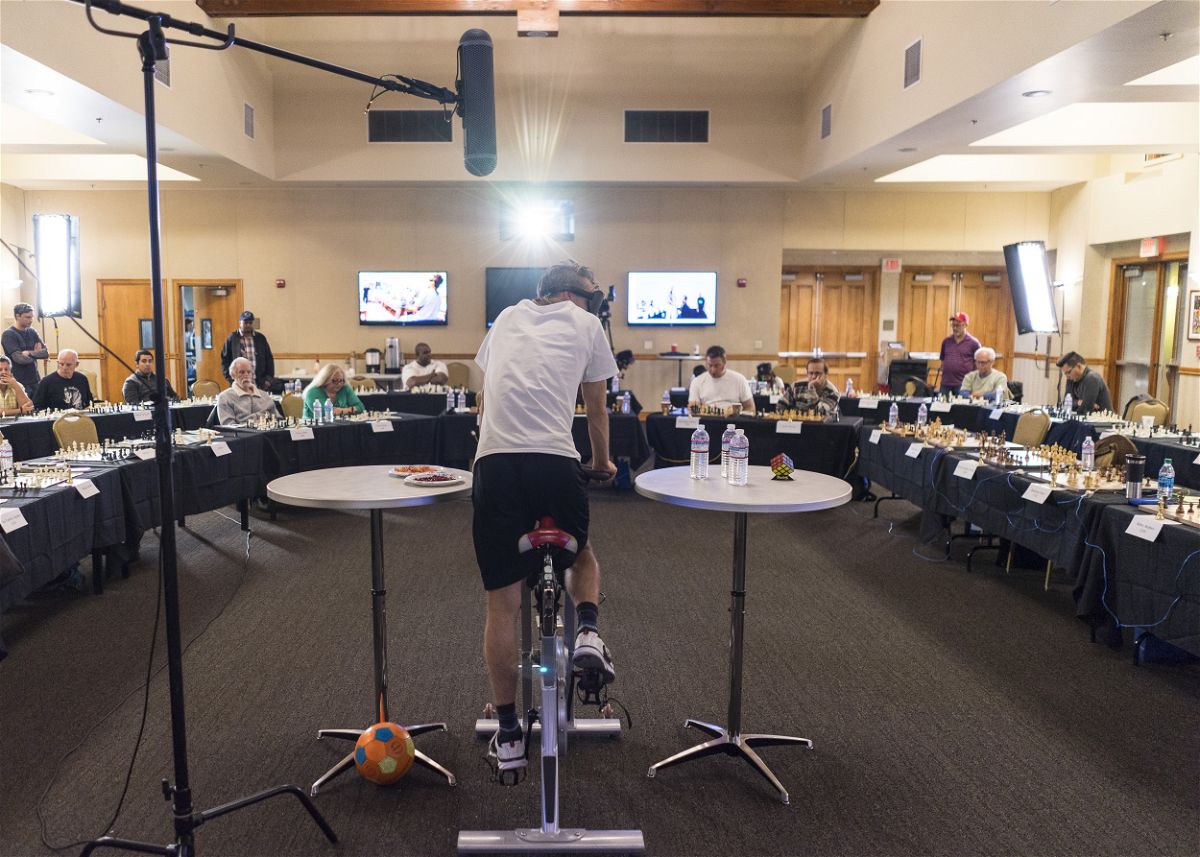 The setting of the simul (picture by Lennart Ootes)

Enormous credit must also be given to the participants as the author can attest to. It might seem obvious to focus on Gareyev who is doing all the hard work, or the hardest in any case, but with games that might last as long as 20 hours, and moves taking 30 minutes each, it requires the active and dedicated participation of players willing to see it through. In many cases this required help to share the burden. 92-year-old Luciano certainly had the desire and enthusiasm to play it until the end, but not the stamina, and eventually the torch was carried also by Albert Silver, and at the end by Priyadarshan Banjan. This was not an isolated case, and what really mattered was that the games were finished properly and with dignity so that Timur’s superhuman effort was not tainted by insincere efforts.

Finally, after nearly 20 hours, Timur Gareyev finished the display with 35 wins, 7 draws, and 6 losses, successfully completing his world record attempt with 80% over 48 boards. The self-monikered “Blindfold King” had earned his name: long live the king. 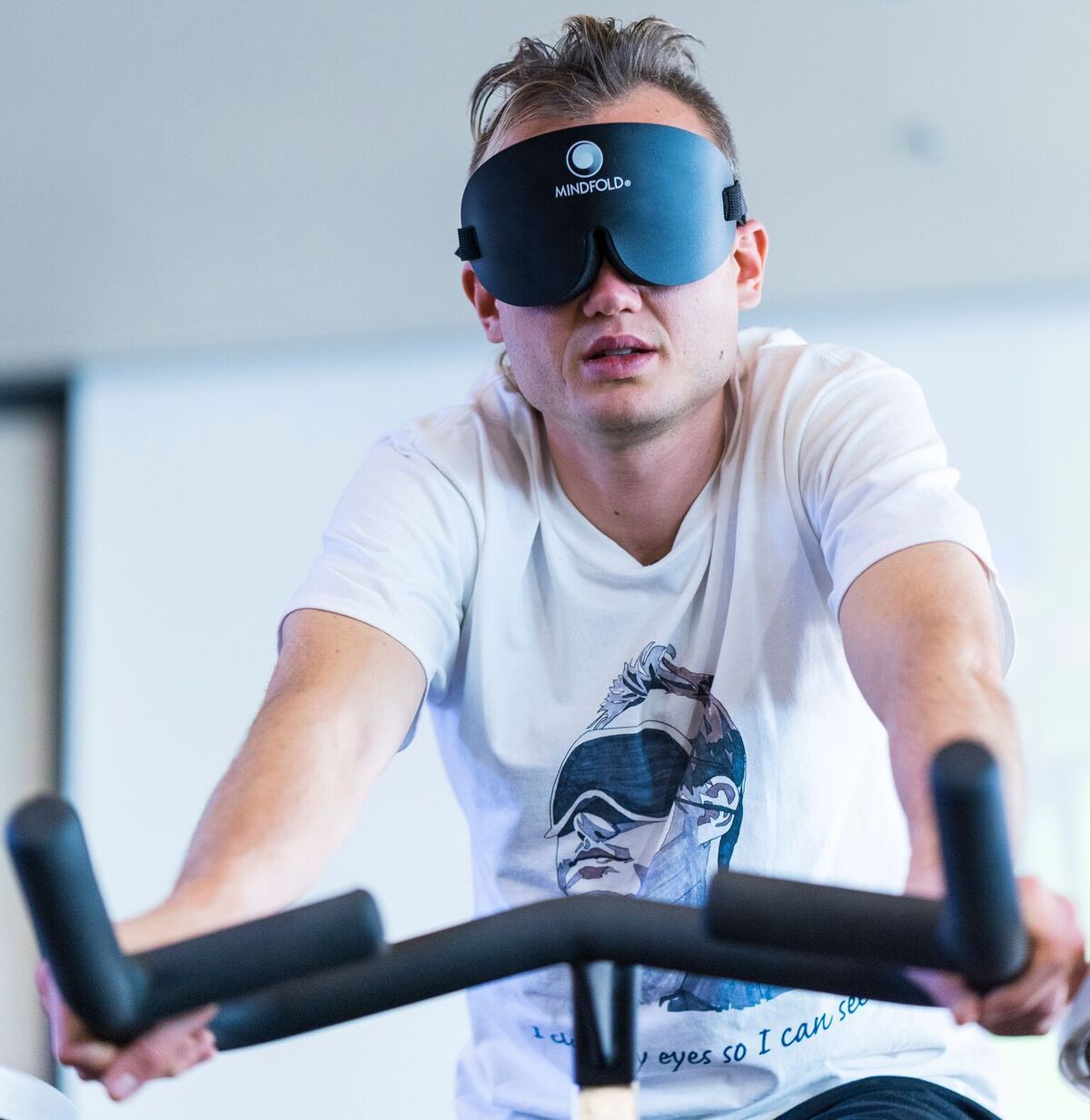 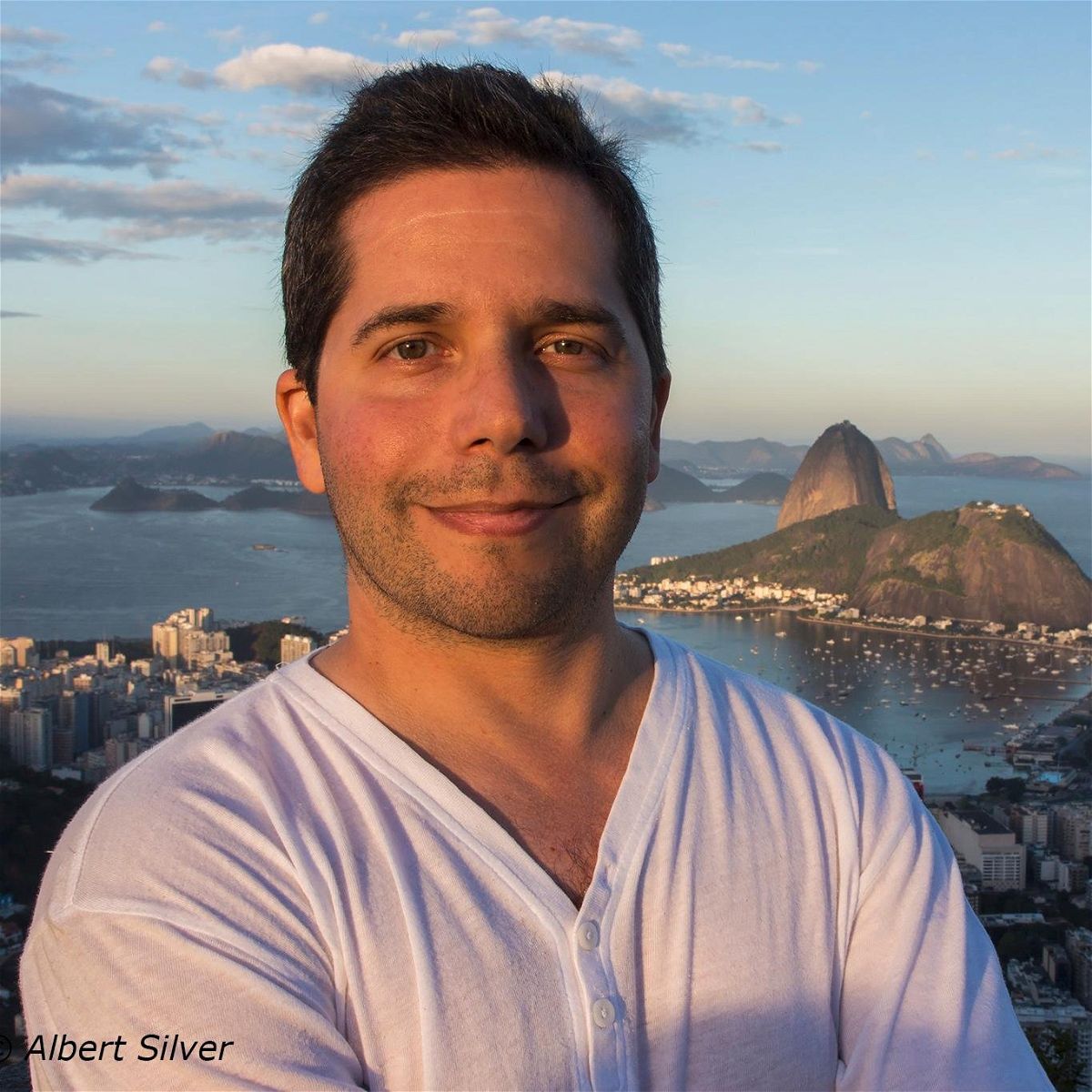 Born in the US, he grew up in Paris, France, where he completed his Baccalaureat, and after college moved to Rio de Janeiro, Brazil. He had a peak rating of 2240 FIDE, and was a key designer of Chess Assistant 6. In 2010 he joined the ChessBase family as an editor and writer at ChessBase News. He is also a passionate photographer with work appearing in numerous publications.

You can now learn the Trompowsky Opening from the blindfold king Timur Gareyev!