Imagine an Open tournament with beautiful surroundings around the venue, a beach nearby. Imagine going to the playing hall by pedaling a bicycle on the seashore. Atul Dahale found it so mesmerizing that he thought he was in a different world. Find beautiful pictures, annotations, GM masterclass by the winner, and more in his report!

Sunway Sitges International Festival was held from 16th December to 23rd December 2016 at Sitges (Barcelona), which is a beautiful town of the Catalonia region. This was the third edition of the festival which attracted players from 30 different countries. The Spanish, Indians and Russians contributed the most number of players that included 27 grandmasters and 31 international masters.

This shows the tournament was very strong and of high quality. In the end, four players scored 7.0/9 points and Russian GM Evgeny Romanov (2622) won the tournament on better tiebreak.

I arrived in Sitges after my tournament in Rome, so I was a bit tired but when I reached the tournament venue all my fatigue vanished! The beautiful surroundings around the venue, the beach, the bungalows on the streets and the calm environment was so mesmerizing that I felt I am in a different world.

Hotel Sunway Playa Golf Sitges was the official hotel of Sunway Chess festival. It is situated in a scenic location on the beach. We were staying at the Sunway apartments and the organizers provided us bicycles for the entire duration of the tournament. Riding the bicycle on beach side every day was a refreshing experience before and after the game.

Look at this 1 min video which will give you an idea of What was it like to ride the bicycle in Sitges and localities. Perfect place to play a tournament in the winter!

What happened in the tournament?

There was a four-way tie for the top place, all with 7.0/9. Top seed from the US, GM Gata Kamsky (2661), French GM Edouard Romain (2611), Spanish GM Martinez Lopez (2552) and GM Evgeny Romanov (2622) scored the same number of points and tied for the first place but Romanov won the tournament on better tiebreak with a 2723 rating performance.

For Romanov, it was second championship title in a row. Just a week before this event, he won the Rome Chess festival. In this tournament, he was leading from the beginning with 5.5/6 points but in the seventh round, he lost against talented Italian GM Daniel Vocaturo (2601). His chances were looking bleak but champions always rise when it matters most. He won his last round game against another youngster, Dutch GM Jorden Van Foreest (2605) and finished on top! 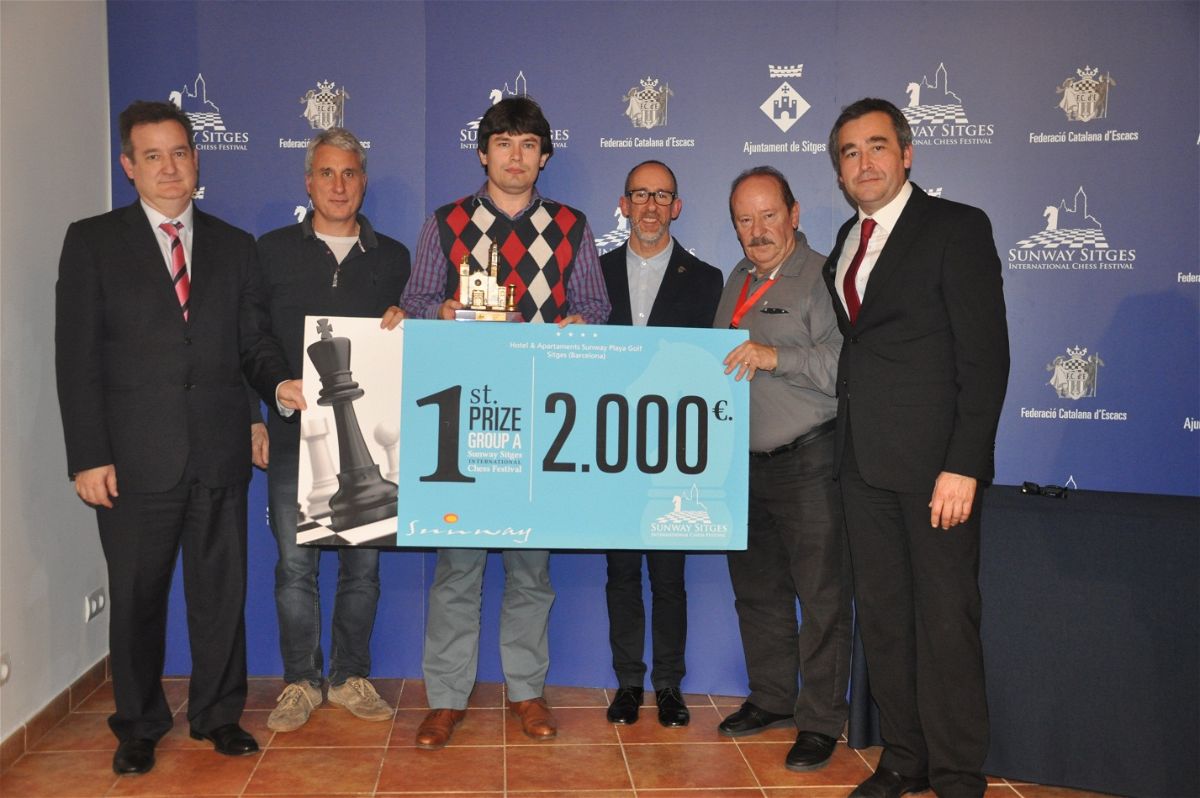 GM Evgeny Romanov with winner’s Cheque of 2000 Euros along with the Mayor of Sitges and Organisers.

On a special request, GM Romanov has analyzed his crucial game from this tournament against the legendary player from Peru GM Julio Granda Zuniga (2646). There is a lot to learn from this masterclass game. 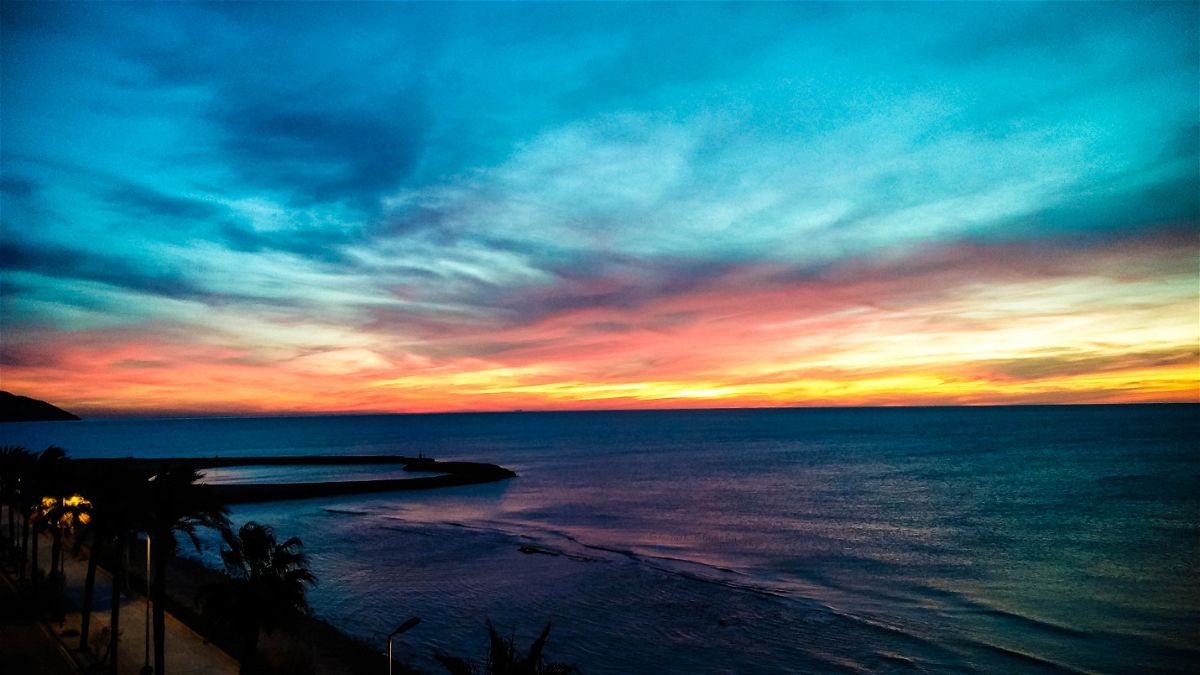 This is the breathtaking view from the tournament hall which Romanov was talking about in the annotated game above. Isn’t it beautiful? (Photo: Sharath Elumulai) 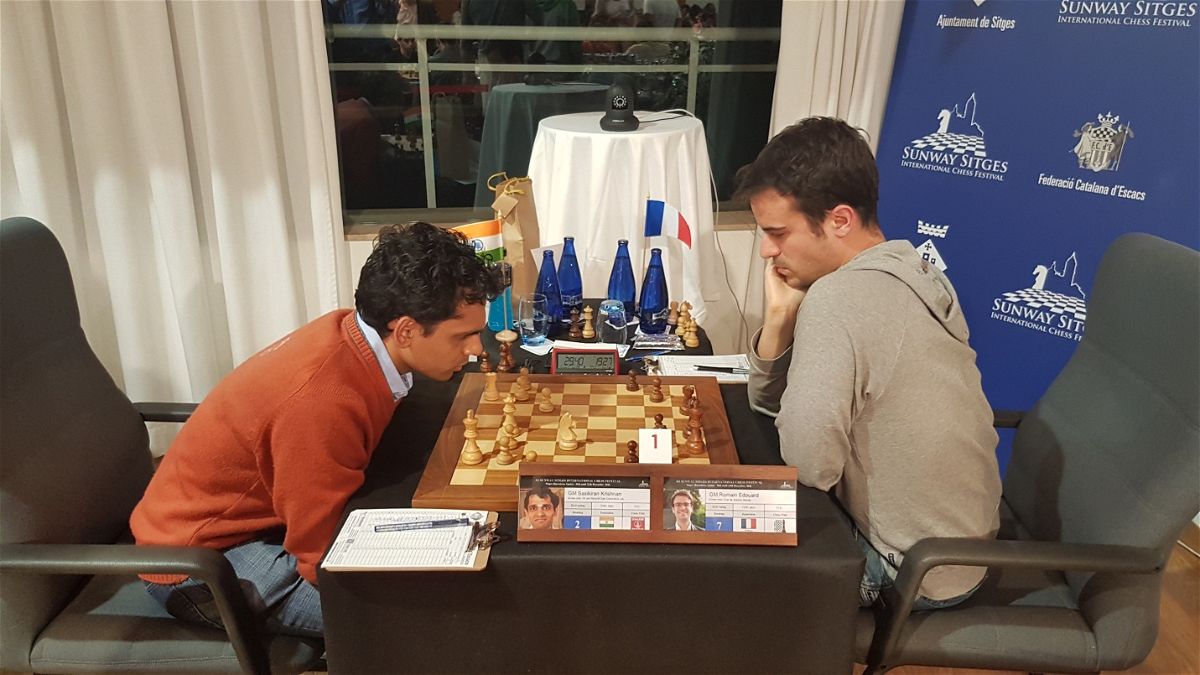 GM Romain Edouard (right | 2611) from France started slowly but picked up speed towards the end tying for the first place with a 2696 rating performance. He was second in the tiebreak and was richer by 1200 euros.

Here is his eighth round win against Daniel Vocaturo. It was a dominating performance! He built his position smoothly and then finished the game without giving any counter play. 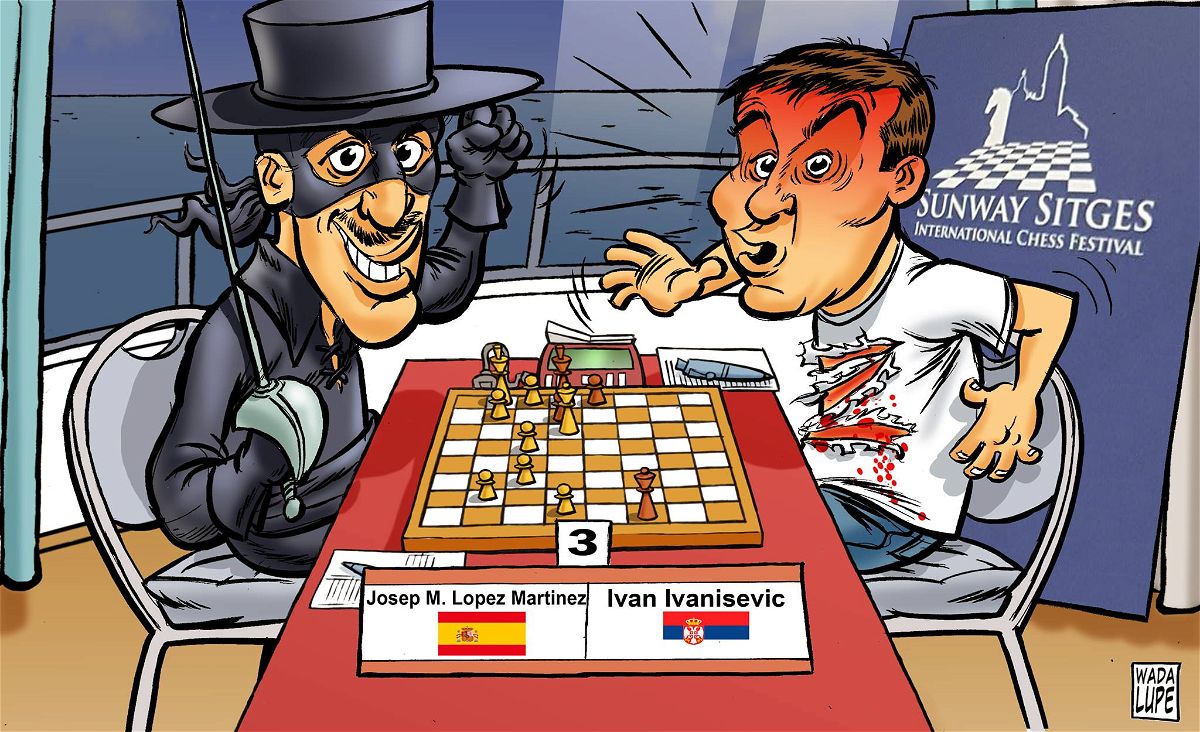 It was an innovative idea of organizers to make cartoons of players. The talented cartoonist Wada Lupe depicts Josep's final round win. Creative and humorous! In this picture, you can see the epic expressions of players!

We present you this game by GM Lopez Martinez with some training questions to solve! Learn how to take advantage of development and initiative in the opening! Enjoy! 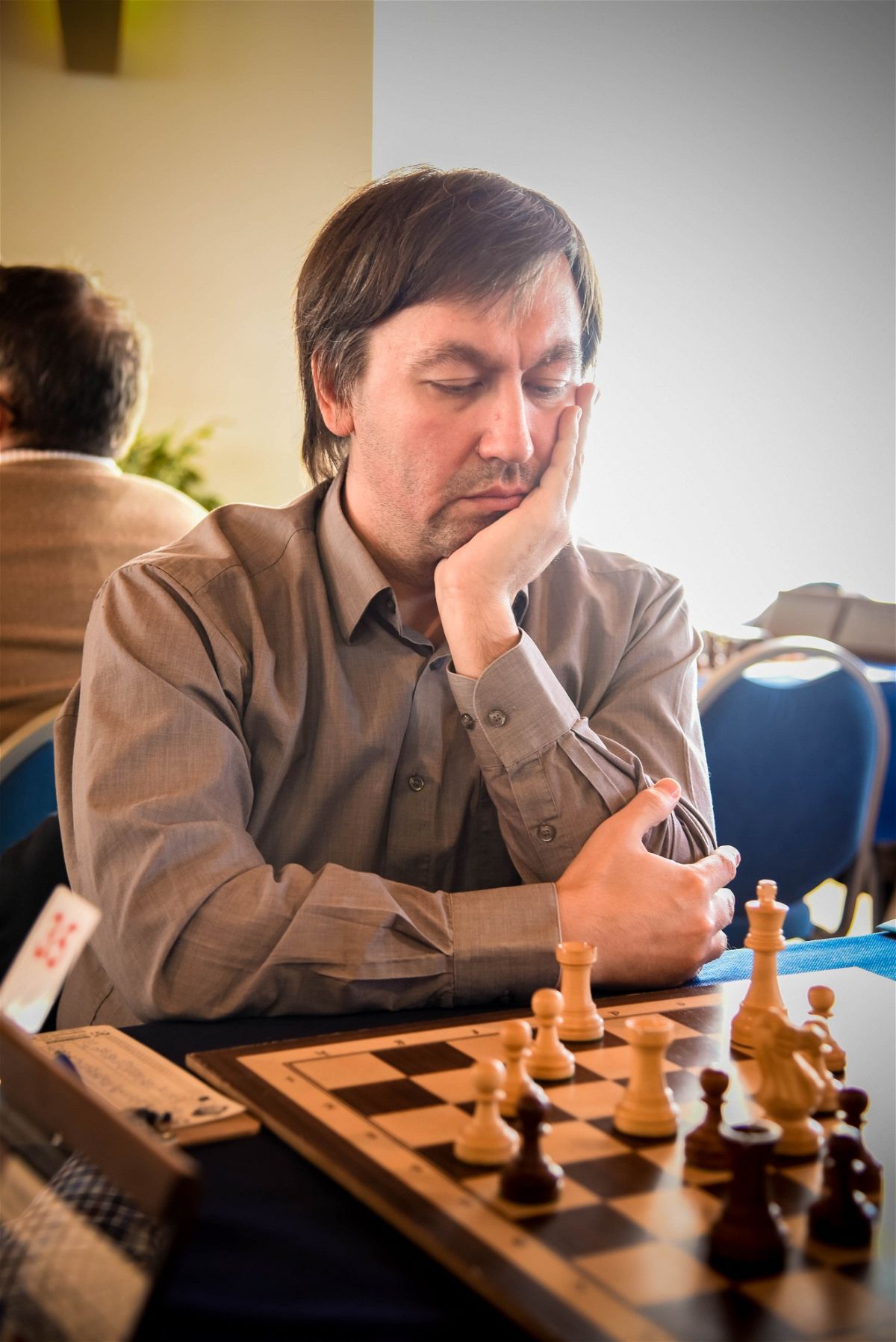 Former World Championship challenger and GM Gata Kamsky (2661) from the USA was the top seed of the tournament. (Photo: Sharath Elumalai )

He had to concede two draws in first three games but then he found his rhythm and scored 7/9 to finish 4th on tiebreak.

Indian Superstar GM Krishnan Sasikiran (2661) had a decent tournament with 5 draws and 4 wins he scored 6.5/9 to finish 7th in the end! 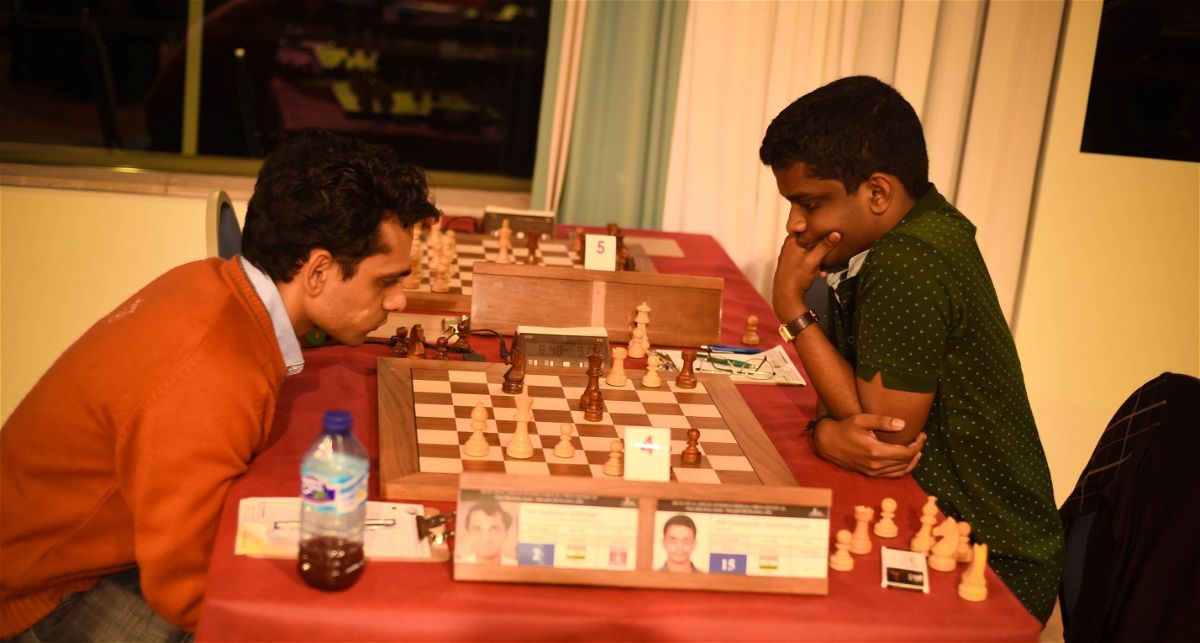 We present you a miniature game by Sasikiran annotated by Soham Datar (Elo: 2030). Enjoy how Sasi forced his opponent to resign after the opening! 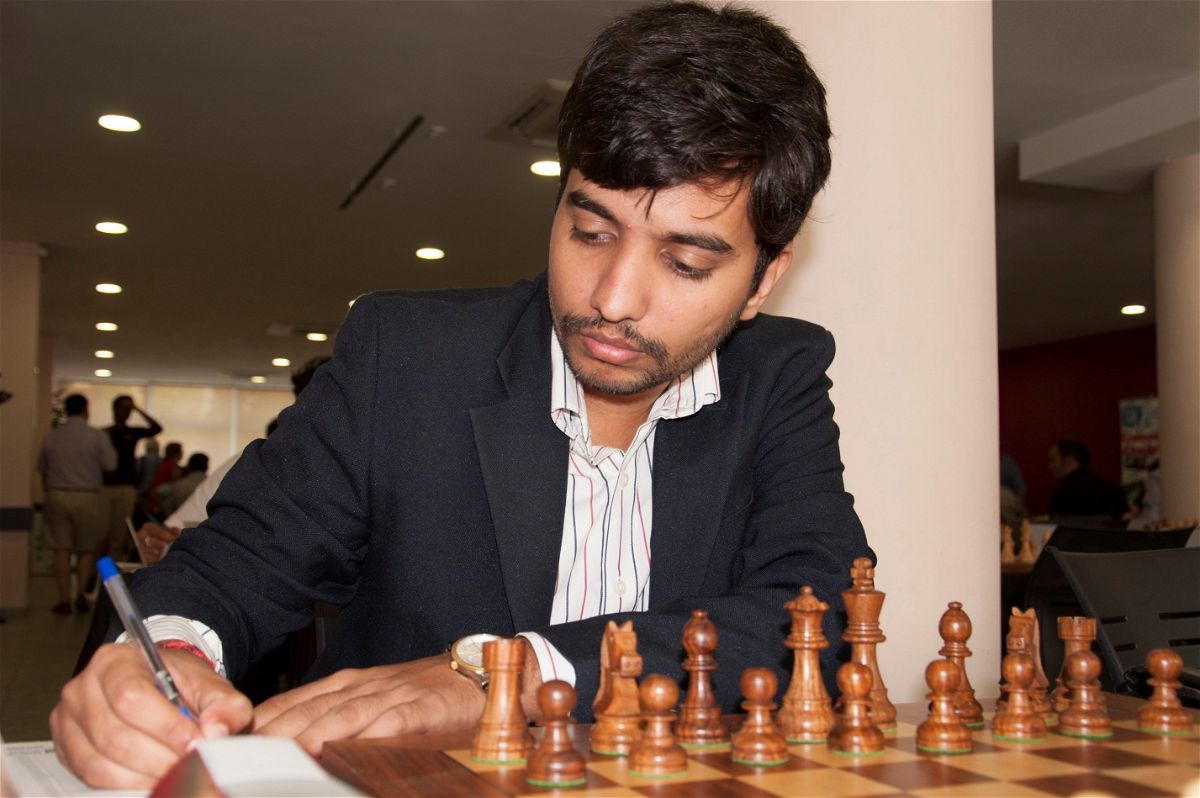 He played 5 games against 2600+ players winning one game against GM Evgeny Postny  (2620) and drawing three against GM Sasikiran K., GM Alexander Zubov (2606) and the champion GM Evgeny Romanov! He lost in the last round against GM Gata Kamsky in a tough game. He had to be content with 6.0/9 and 11th place. Way to go Shyam!

Here is his superb win against GM Postny Evgeny (2620) where he played quite aggressively and showed that he is not afraid to get into complications! 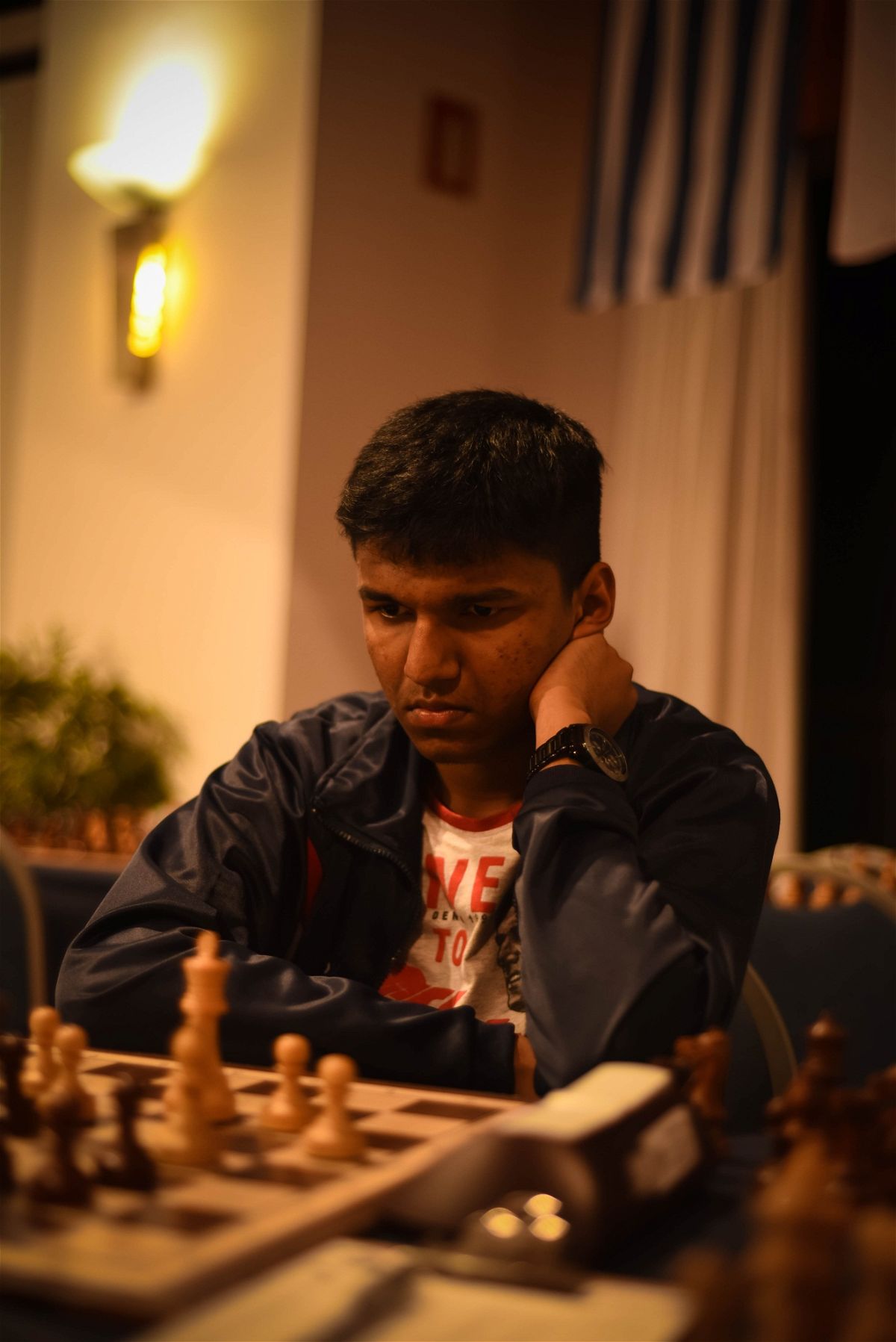 The talented boy Harsha Bharathkoti played some good games and achieved his final IM norm in this tournament. He has completed all his IM title formalities to become a full-fledged International Master! 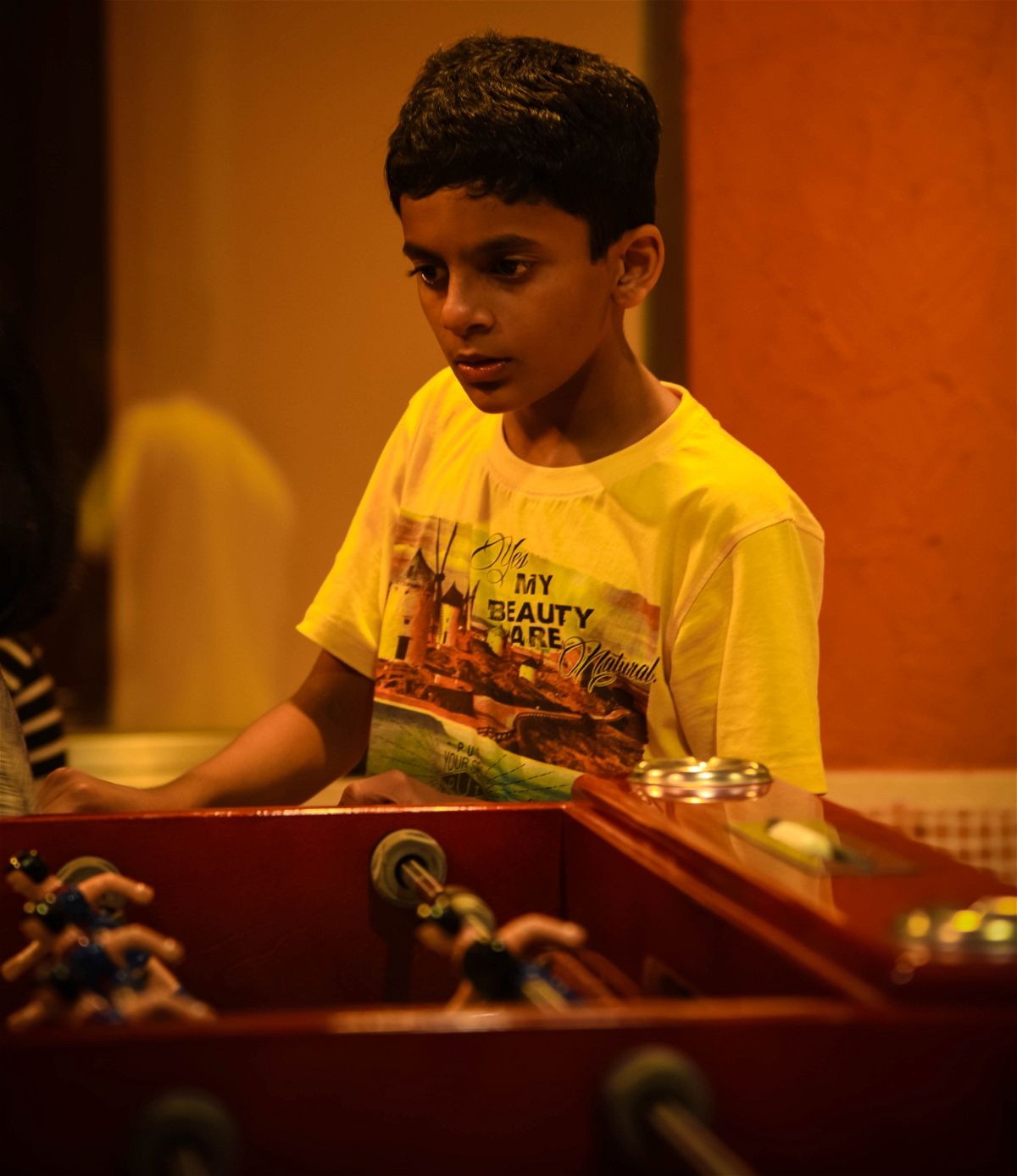 Our wonder boy FM Nihal Sarin, who is already a 2386 rated player, scored 5.5/9 points to achieve his second IM norm. This 12-year-old kid is really very talented! He showed his true colours in the two blitz tournaments that were held alongside the main event where he cleaned up a field full of titled players! (Report).


Here is his one game which he drew against the second runner-up GM Josep Martinez Lopez with a fine positional style. This boy knows his stuff! 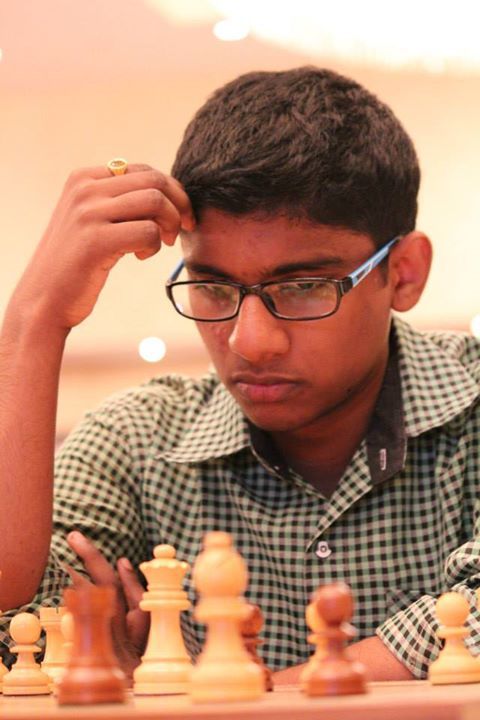 Sai Agni Jeevitesh (2115) gained 124 Elo rating points from this tournament. From his recent European tournaments, he gained around 300 points and has crossed 2400 rating mark! (Interview to follow). 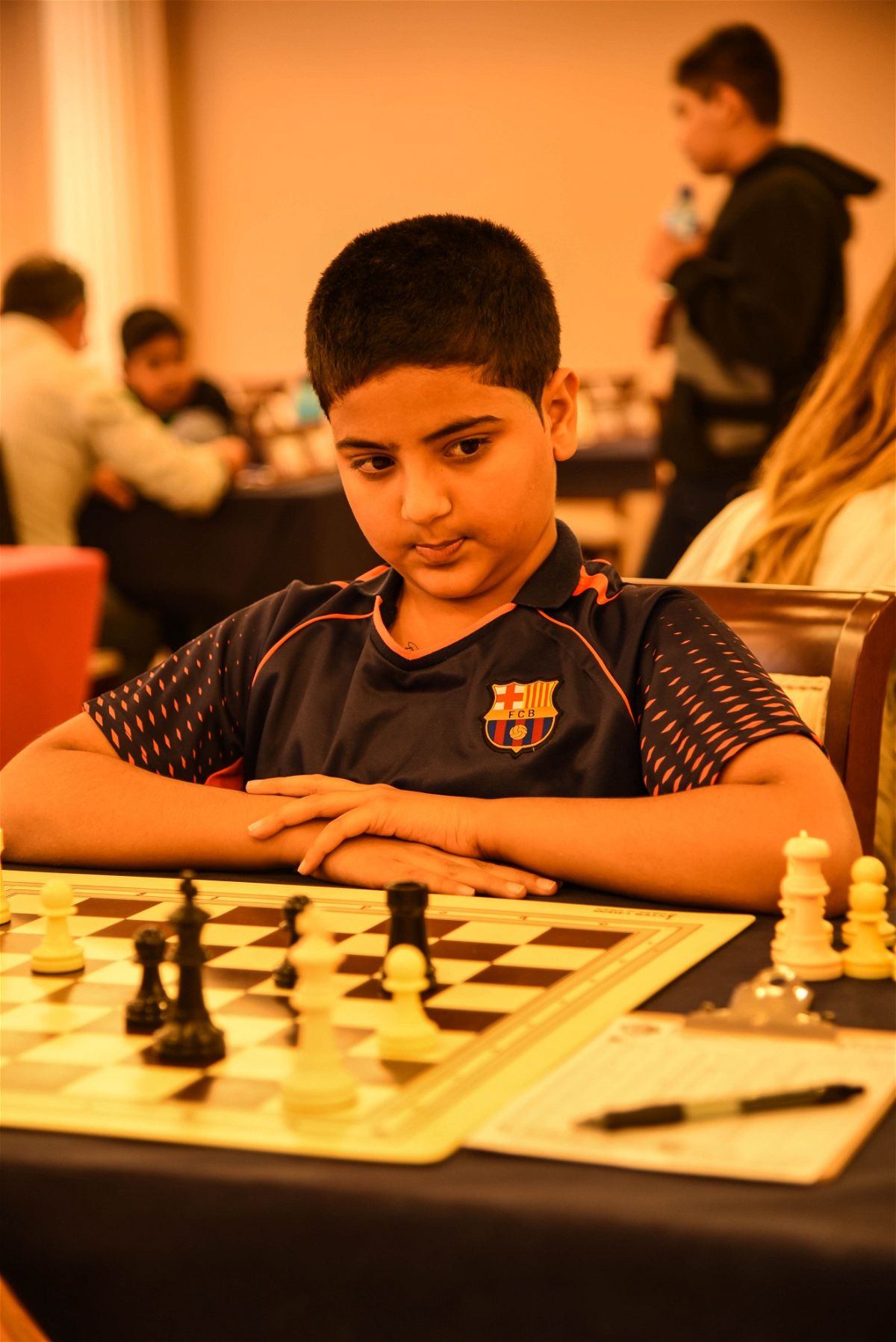 The 11-year-old talent from Nagpur CM Raunak Sadhwani (2246) was in good form. He was very close to complete his maiden IM norm. 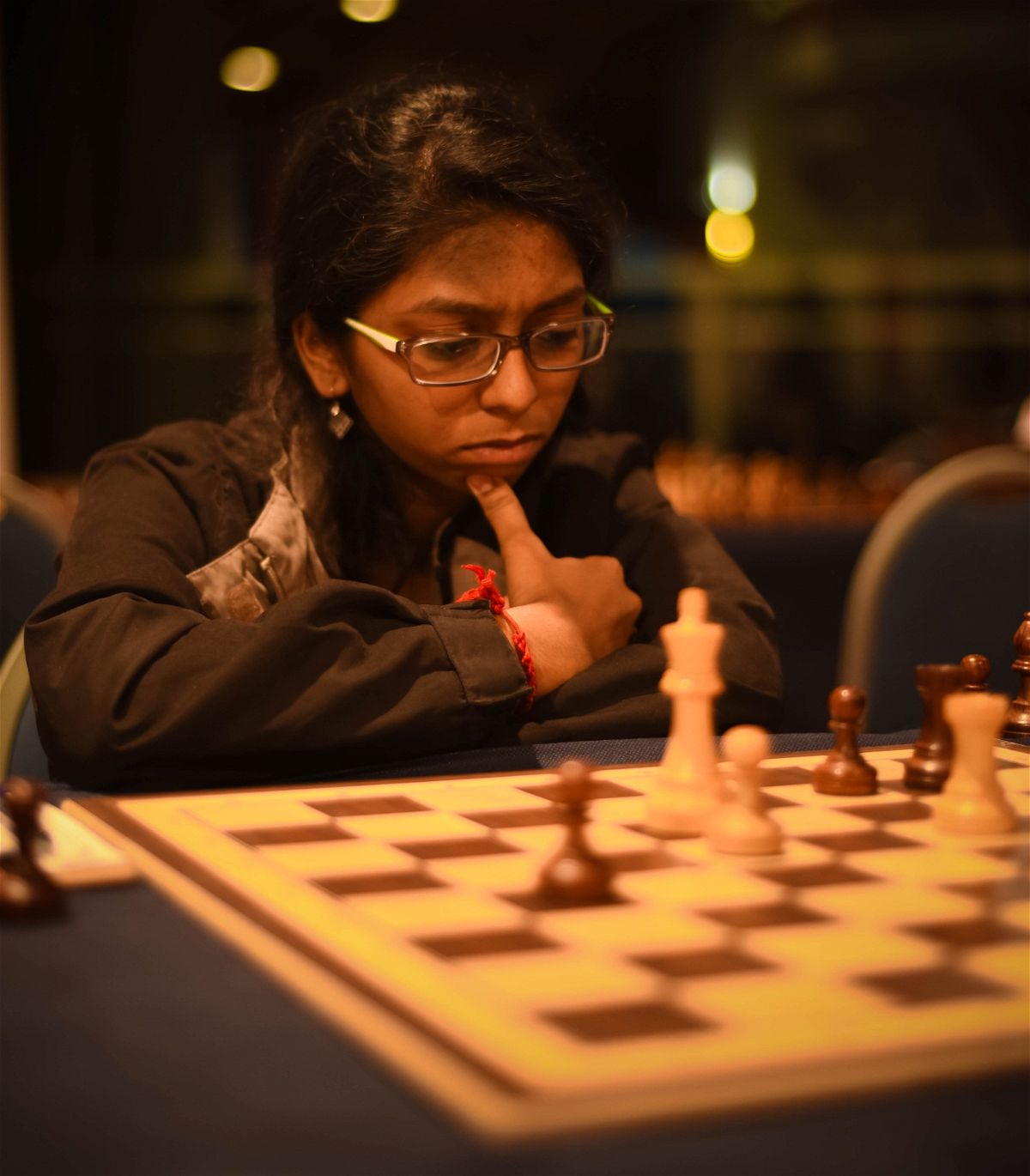 The organization of this tournament was top notch! The organizers made sure that players got all the facilities and enjoyed their stay at Sitges. They took care of each and every small detail. Right from providing free sports facilities in the hotel, bicycles for players to commute to the venue and elsewhere, feast and cocktails for the players! On few days, movies were shown on big screen.

A unique way to celebrate this festival with all the participants of the tournament! 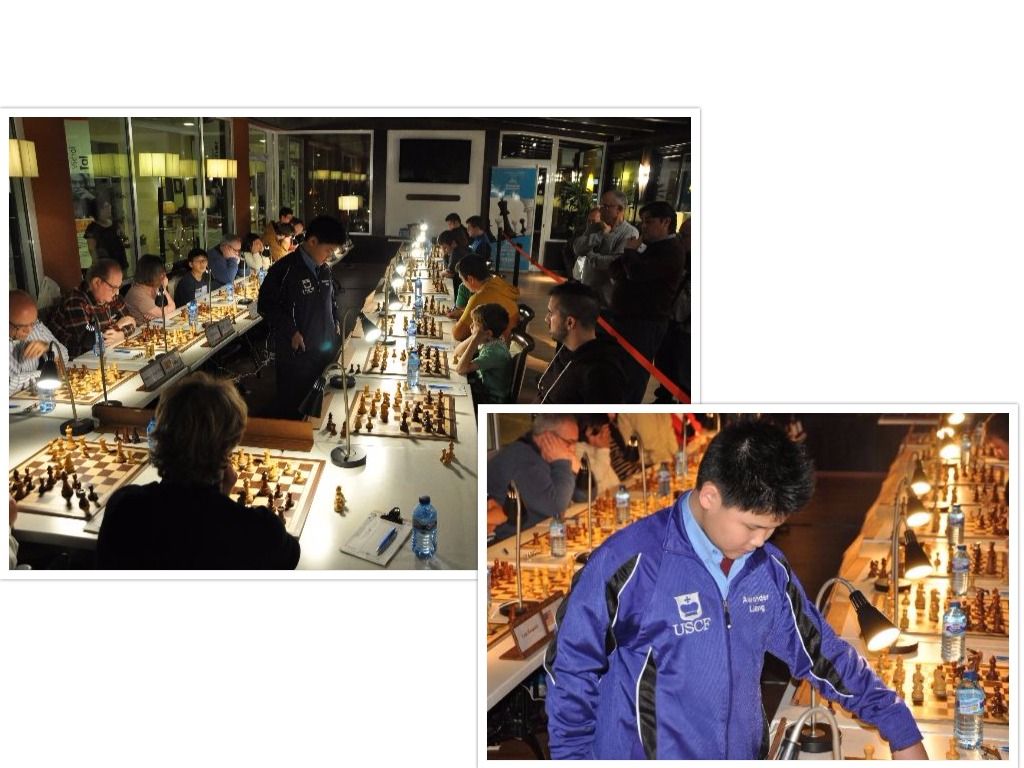 One of the world youngest international masters, Awonder Liang from the USA, was playing in this tournament. The organizers arranged one simultaneous display of this wonder kid! 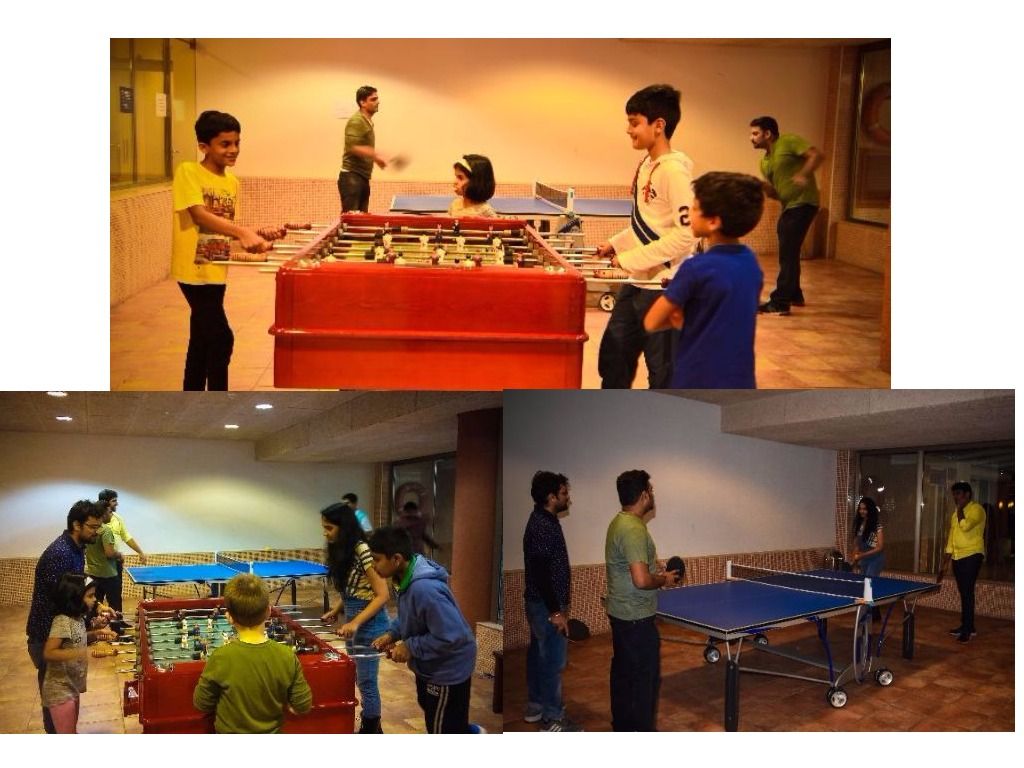 Sports facilities by the organizers to all Players was a treat! Every day, after the games, we used to go to playing arena and enjoy Table Tennis or Fussball! Sports of any kind is always a stress buster after a tough game. 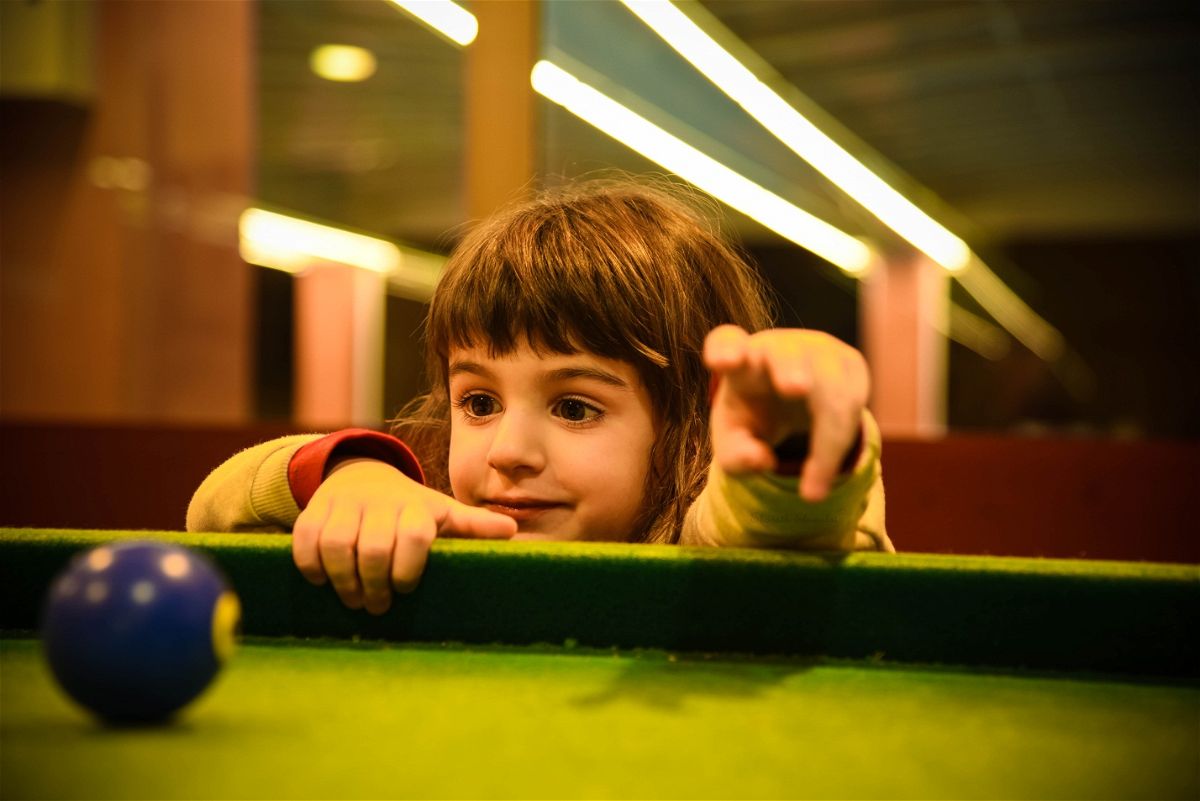 Everybody knows that Sasi is an expert when it comes to opening preparation but he is also a very good Table tennis player! Enjoy how he serves like a Pro.

On a Personal Note... 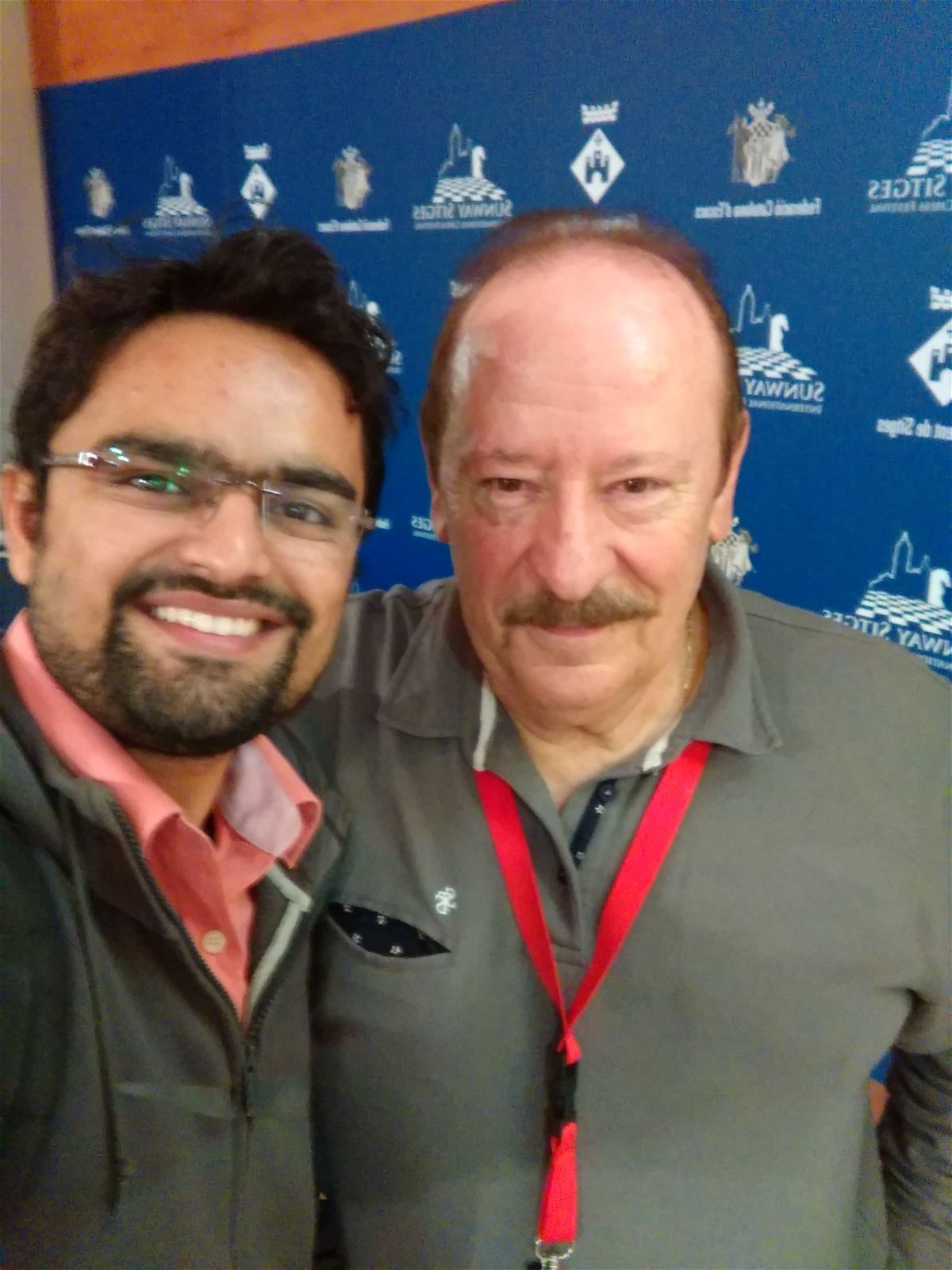 Selfie with the ever-smiling and efficient organizer of Sunway Sitges Chess Festival, Mr. Francesc Gonzales. Thank you for organizing such a wonderful event! Looking forward to come and play next edition! 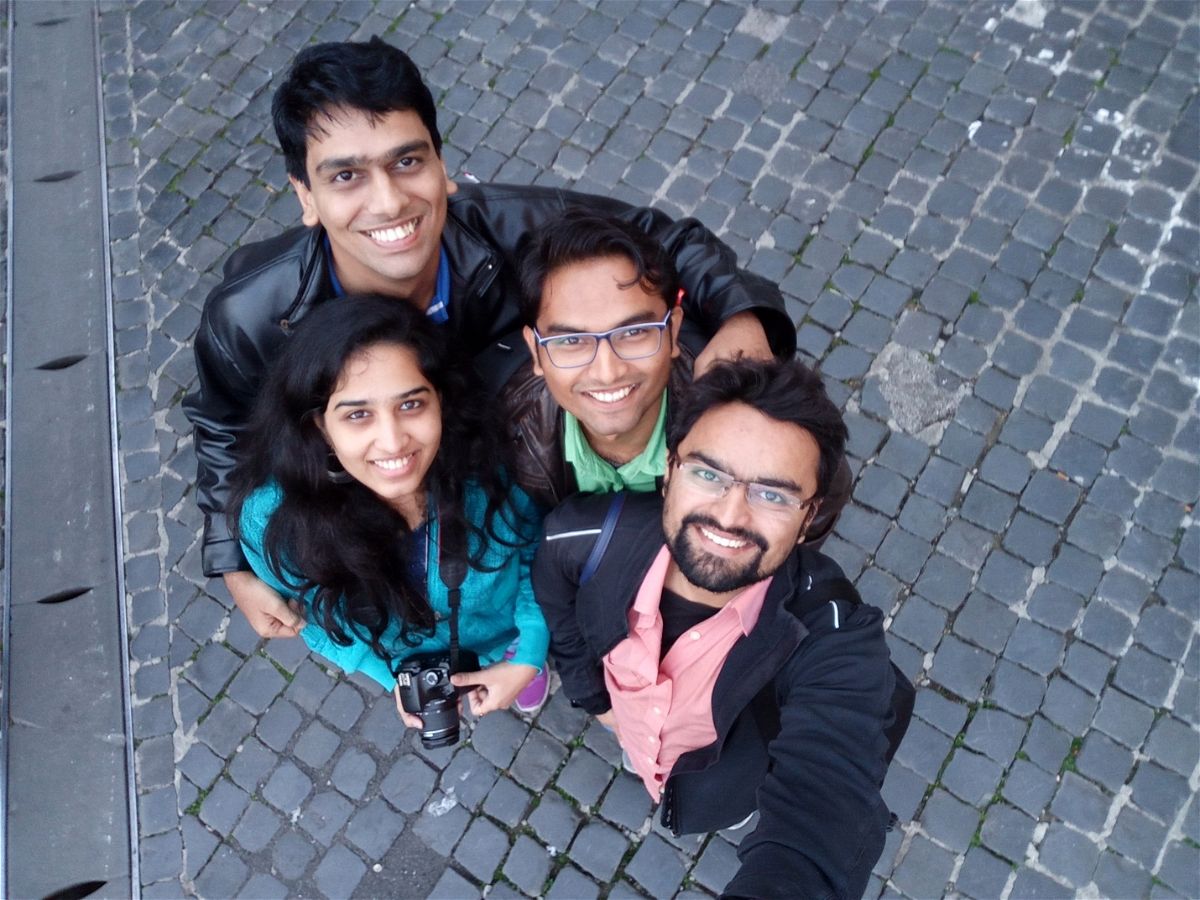 During this tournament, I was staying with my friends Aniruddha Deshpande (Better known as 'Sir' — the origins of this title remain unknown), Supriya Joshi and Swapnil Dhopade!

I am really impressed by the way this tournament was efficiently organized. We really had a great time together in Sitges! This tour wouldn’t have been so amazing and memorable without my friends and the organizer himself!

Atul Dahale is one of the first internationally FIDE rated players from Parbhani. He loves the game of chess and enjoys the fact that he can travel to different places, meet people and make new friends thanks to chess. He has a rating of 2076 and is a successful coach currently based in Pune, Maharashtra. You can contact him on atuldahale64@gmail.com. 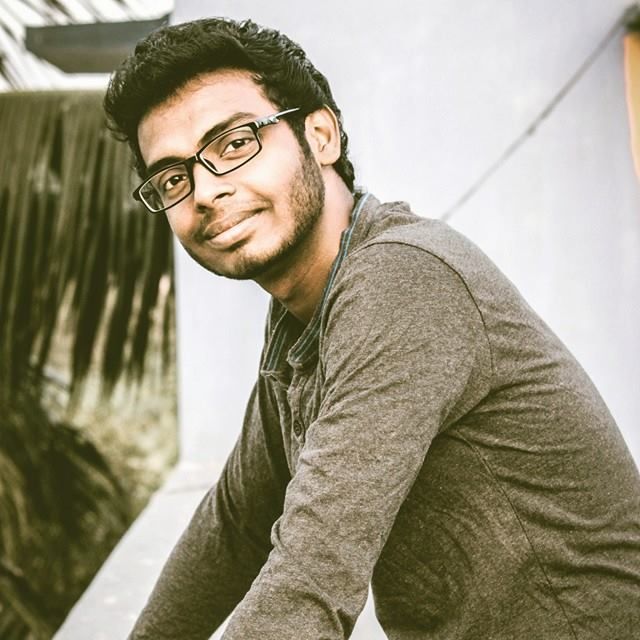 Special thanks to Sharath Elumulai for contributing with his pictures.