World's smartest chess board is here!

How about sitting in the comforts of your living room and challenging a player anywhere in the world to play a game with you on a "real chess set"? Sound's impossible right! With the world's smartest chess board - Square Off, it no longer is! This article deals with the journey of how this revolutionizing chess technology was created. After years of hard work and innumerable prototypes, the final product is now ready. And you can be the proud owner of the Square Off chess set by supporting their campaign on Kickstarter!

You are sitting at home looking for a game of chess with a friend that you have invited. The chess board and pieces have been arranged. The settings look perfect. You have prepared a few clever opening traps to score a few quick points! Suddenly you receive a text from him saying that he is busy and won't be able to make it. Ahh! What a horrible day!

Reluctantly you get up from your chair and make your way to the computer. You go to an online platform and start playing chess with random people who are also sitting in front of their computers in different parts of the globe. While playing online is fine, the fun of touching the pieces and making the moves on a real chess board is the missing element. The 2D computer screen doesn't give you the same experience that one gets while playing on the chess board during a tournament. That's when you swear at your friend for ditching you.

Meeting friends at a common place in order to play chess on a real chess board is not easy. You have to fix a location, a common time, take care of the transport and all of this is a huge hassle. But what if you could play on a chess board from the comforts of your living room against an opponent anywhere in the world! 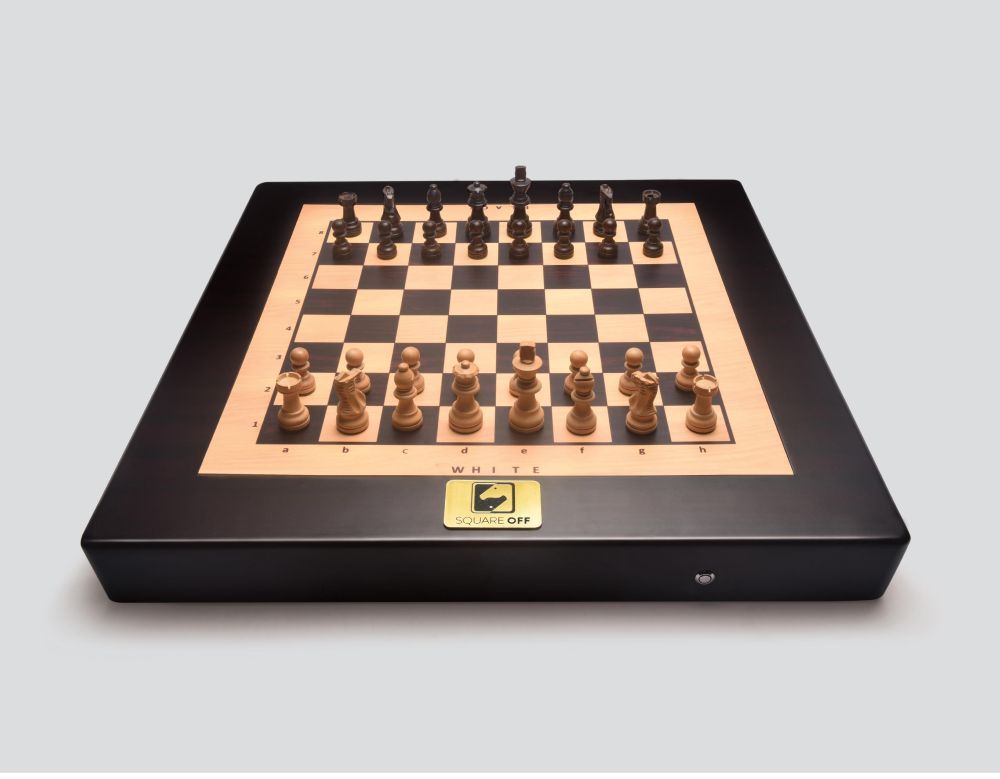 Presenting Square Off - world’s most evolved board game ever!

Two chess boards are connected with each other with the help of the Square Off app on your smart phone. The app will connect you with an opponent sitting anywhere in the world. Suppose you get the white pieces and make the move 1.e4 on the board, that same move will automatically be executed on your opponent's board! It's just like playing against a real opponent!

Besides human opponents, you can also play against the in-built engine which will automatically make its moves.

Square Off uses a compact two axis robotic arm with a magnetic head beneath the box to move the magnetic chess pieces. The AtMega 2560 chip with Bluetooth BLE ensures smooth communication with a smartphone, taking care of decrypting and execution. The most important thing is that the it is programmed in a way that the chess pieces don’t collide during automatic movements. 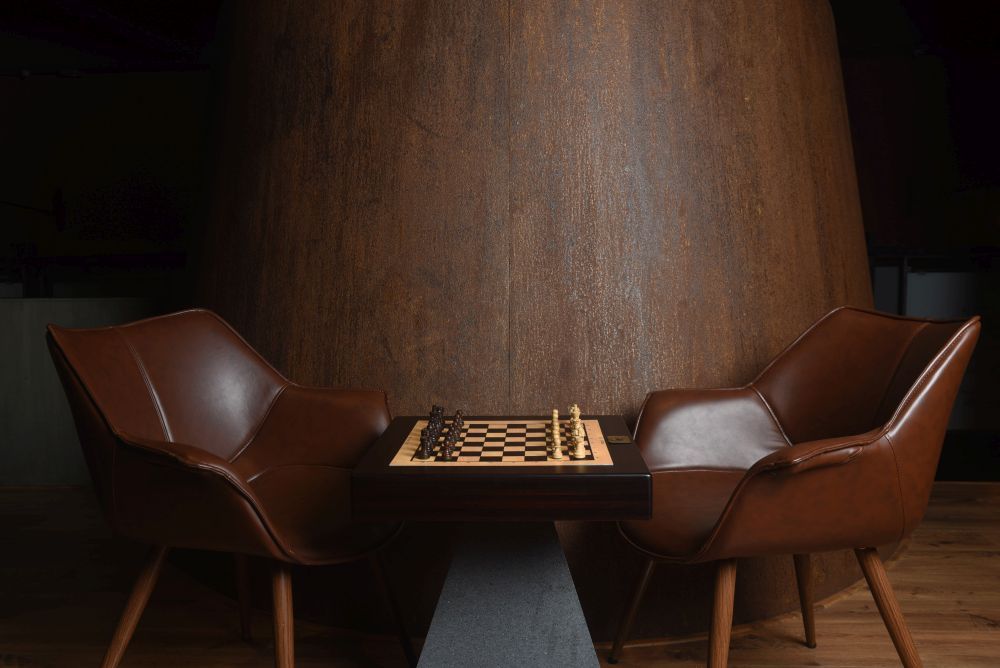 The MDF wooden board comes with a premium Rosewood finish. It’s spill-resistant and suitable for all climatic conditions. The dimensions of the board are 486 mm x 486 mm x 75mm. 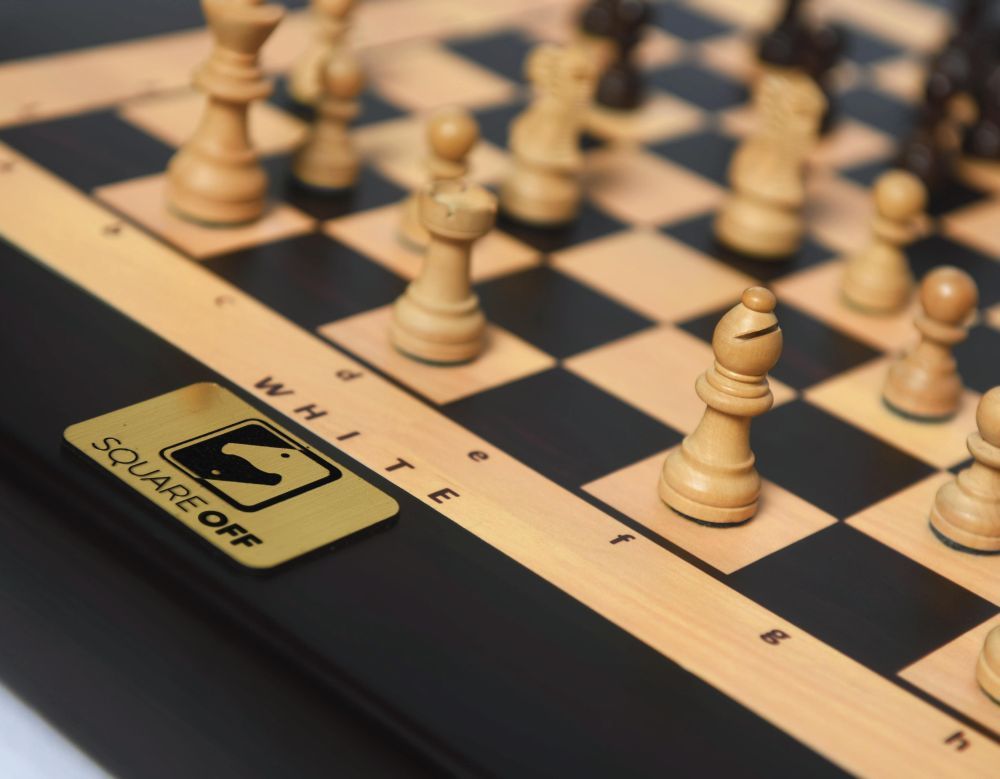 The chess pieces are 2.5-inch tall fitted with Neodymium magnets

The Square Off App

The idea is to make the chess board button-free.  Hence, everything is controlled through the app. Be it selecting black or white side, difficulty levels, challenging friends, analyzing games, using the clock or chatting with the opponent. Your phone is connected to the board all the time via Bluetooth, allowing you to save an incomplete game. Also, it uses your phone’s Wi-Fi to connect to the internet and your phone’s processor to process the data and think of the next possible moves. Currently it works on Stockfish 7, which is the best open source chess engine. Many more engines will be offered in the future.

Features of Square Off 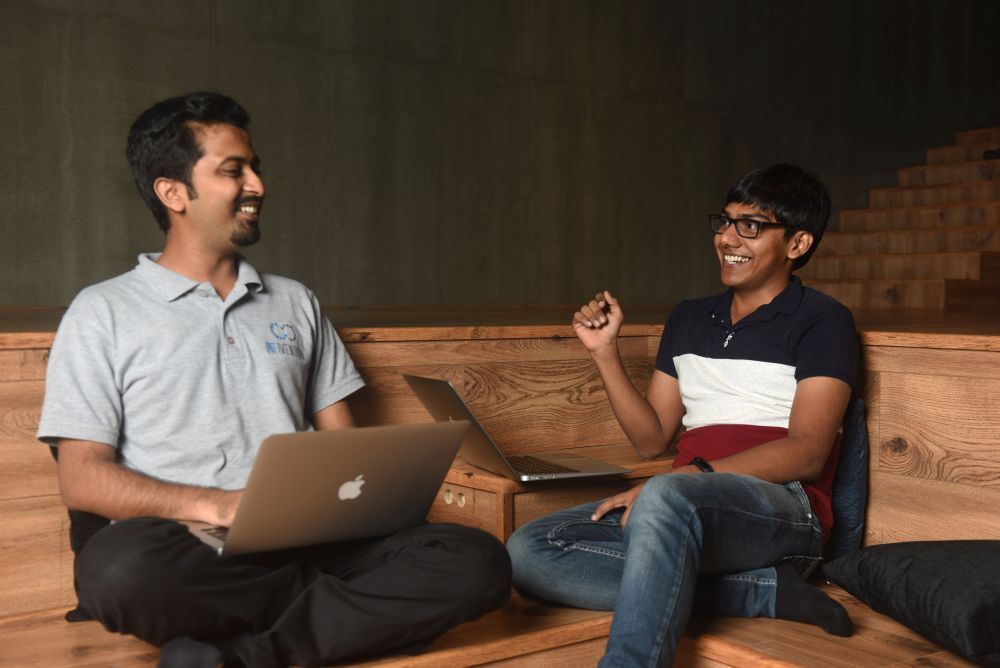 The minds behind Square Off: Bhavya Gohil (left) and Aatur Mehta. Both are electronic engineers from the Mumbai University

In the year 2013, Bhavya and Aatur got in touch with the Chairperson of National Association of Blind (NAB) to understand the feasibility of an idea. They wanted to design a chessboard for the visually impaired. It was not possible for the blind to play chess on computers and smartphones. Being board game lovers, Bhavya and Aatur dived in to explore the possibilities. They researched tirelessly to finally arrive at a design. But, they didn’t have the funds to bring the design alive.

In order to fund themselves they started participating in various technical paper presentations and national level tech competitions to earn the prize money, just to create the prototype. Gradually they gathered sufficient cash to design their first prototype in 2014. They were helped in a huge way by RiiDL (Research, Innovation, Incubation, Design Lab) at Somaiya College, Vidyavihar, the institution where both Bhavya and Aatur studied engineering. 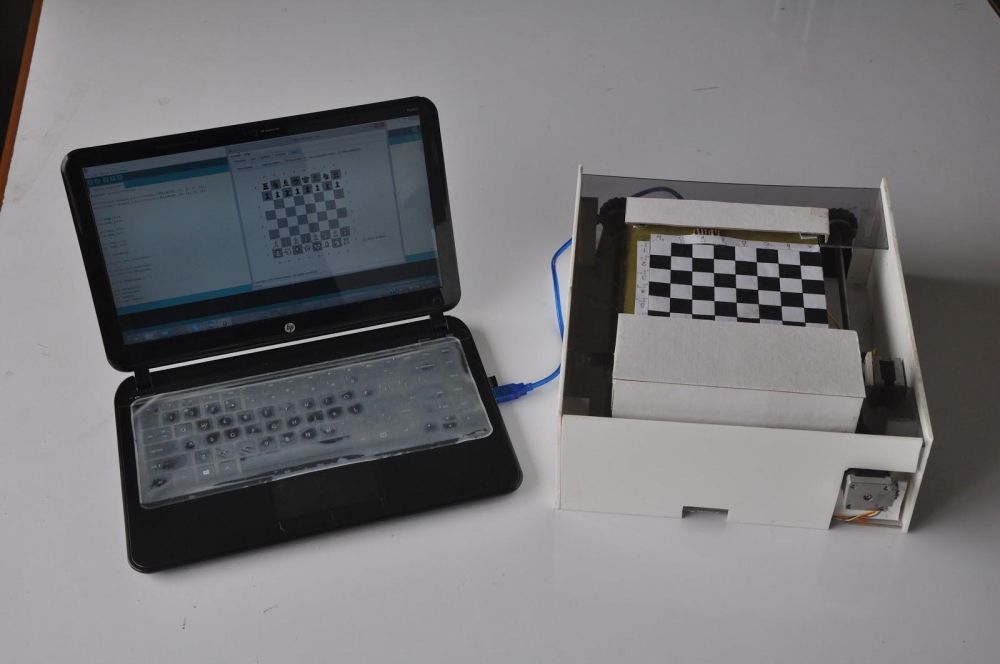 Prototype 1 - The proof of concept to show the possibility of automated movements by sensing and analysing the user inputs. With a set-up time of 30 minutes, it was very slow and noisy. It required to be connected to a computer to meet the demand of high processing power. 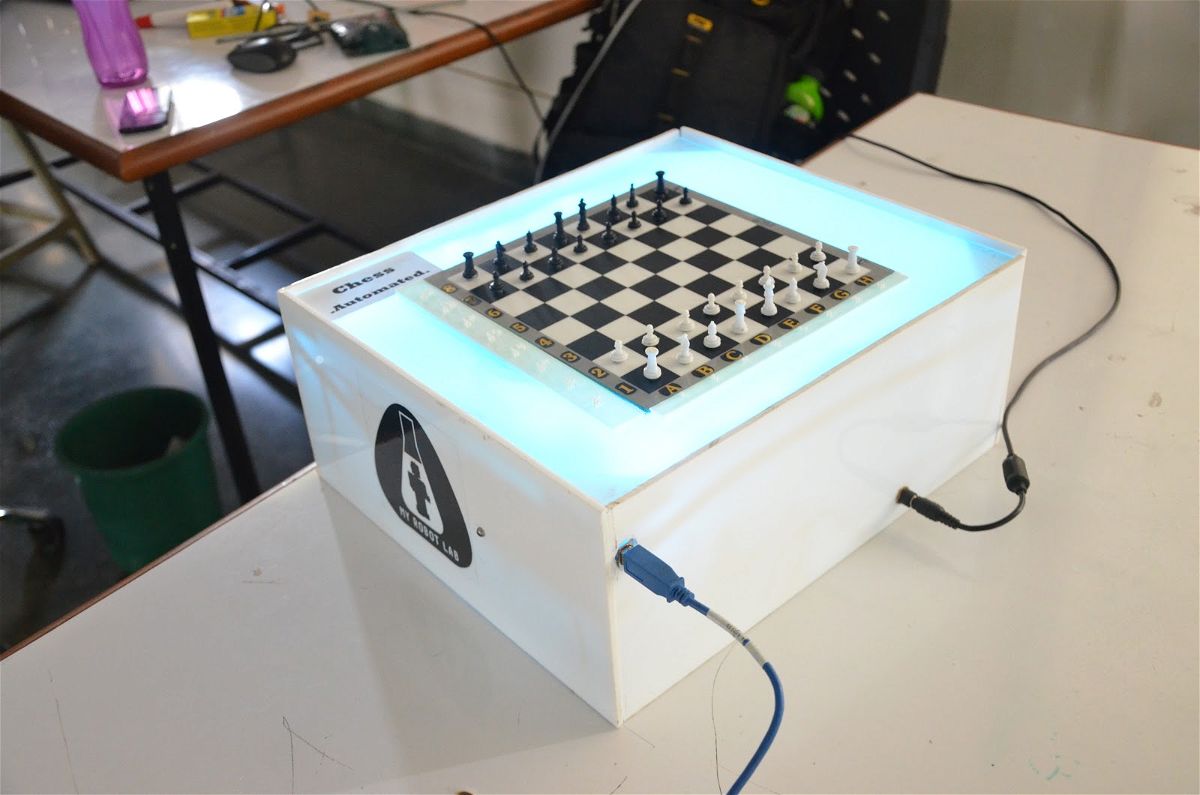 Prototype 2 - It was  built in july 2014, for the visually impaired. With voice feedback for each and every move, braille coordinates, texture difference between black and white squares, strong magnetic chess pieces, it was a small and portable machine. But, the chess pieces were too small and the board still needed to be connected with a PC. It required bigger pieces to ensure a comfortable handling for the visually impaired.

The Chairman of National Association of Blind, who himself was visually impaired, tested the prototype and loved playing on it. As Bhavya puts it, "It was one of the happiest days of our life!"

It was time to take it to the next level. On 3rd October, 2014, Aatur and Bhavya got an opportunity to present their prototype in front of an international audience at the Maker Faire, Rome. This was the real turning point. The response was tremendous and the exhaustive feedbacks made them realise that the board had the potential to connect the whole world. 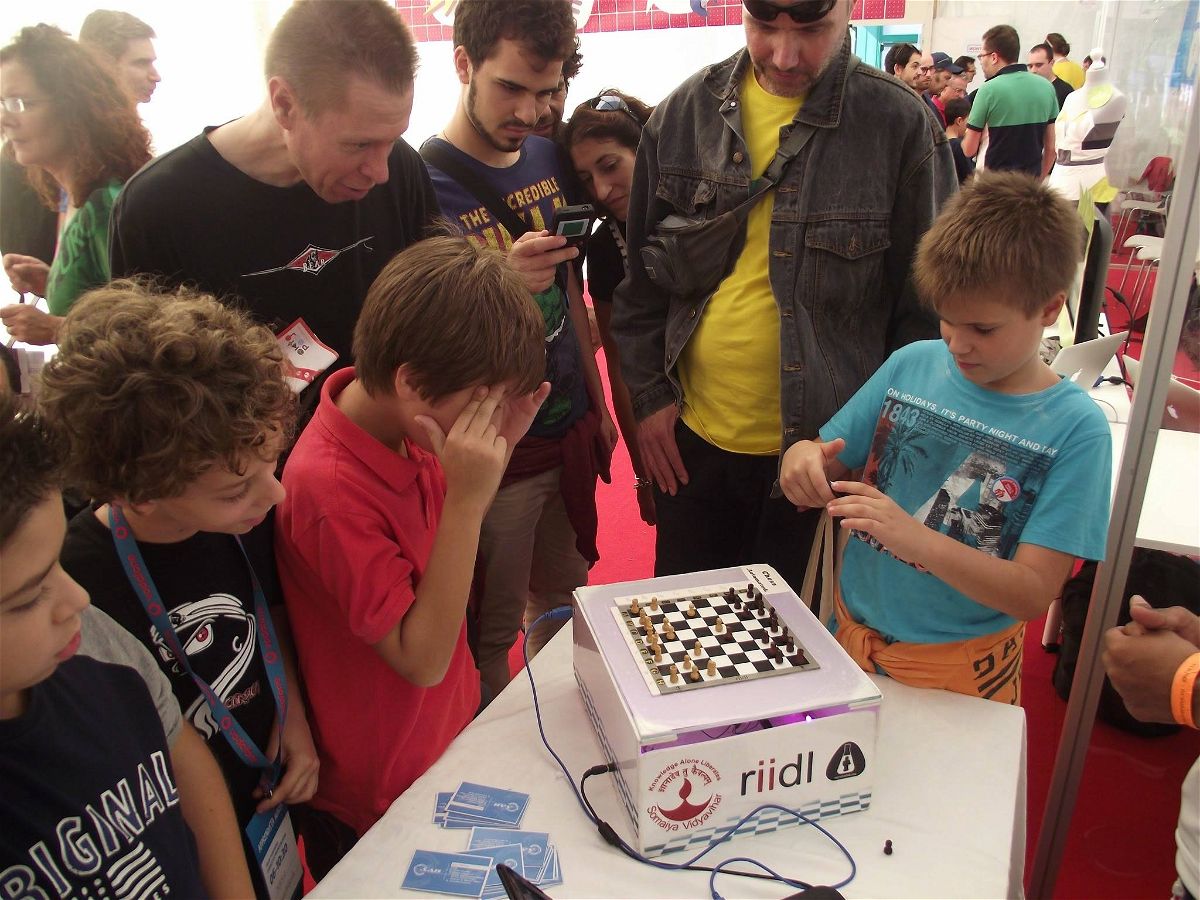 Captivated audience at the Maker Faire in Rome 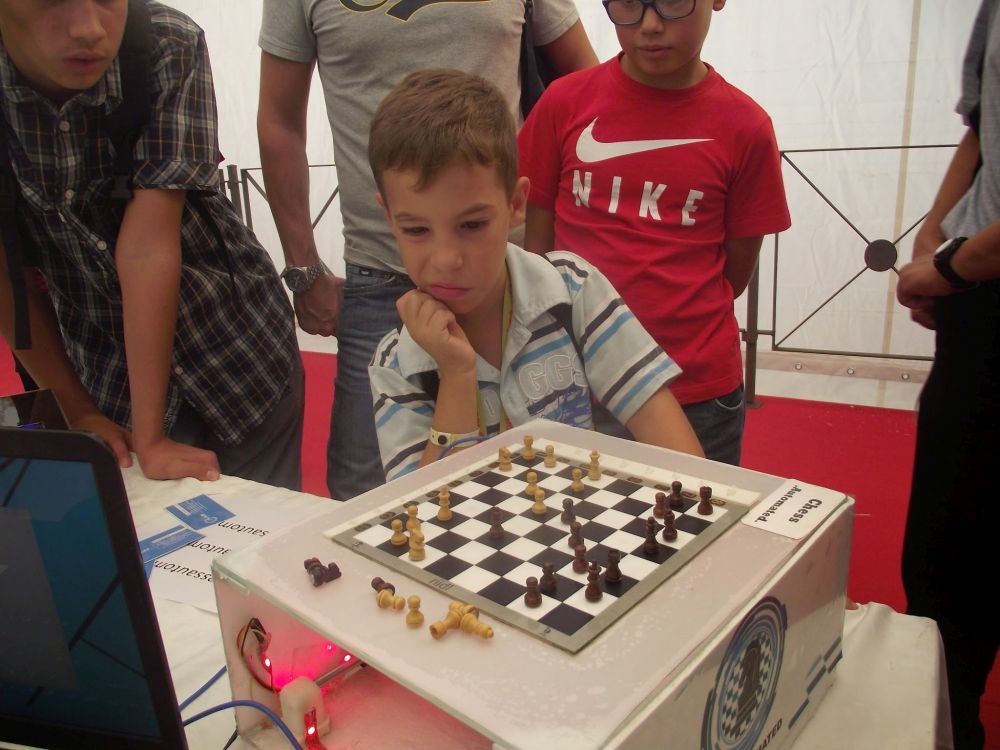 The automated board seems to have got better of his young kid! 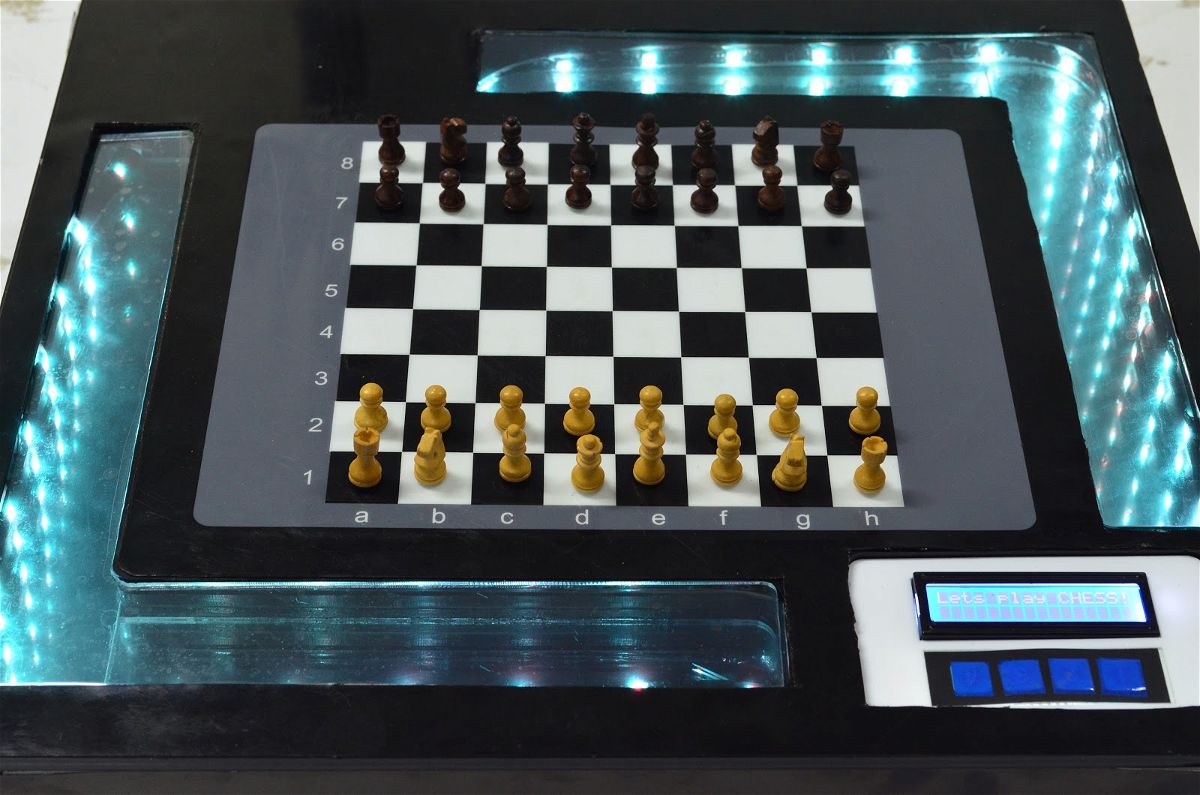 Prototype 03: Built in December 2014, after returning from Rome. This was a sleeker version, with LED and LCD screen to make it visually interactive. Bluetooth enabled and app controlled, it was fast and accurate. Capture space was an added bonus.

More opportunities flowed in. The duo were invited to showcase the prototype at all the IITs in India, MIT Boston FAB 11, Startup Istanbul and the Sharjah Chess Club.

Although, it had a smoother mechanism, the board lacked premiumness. That’s when they decided to create a classic, rosewood finish chessboard with exquisitely designed chess pieces. 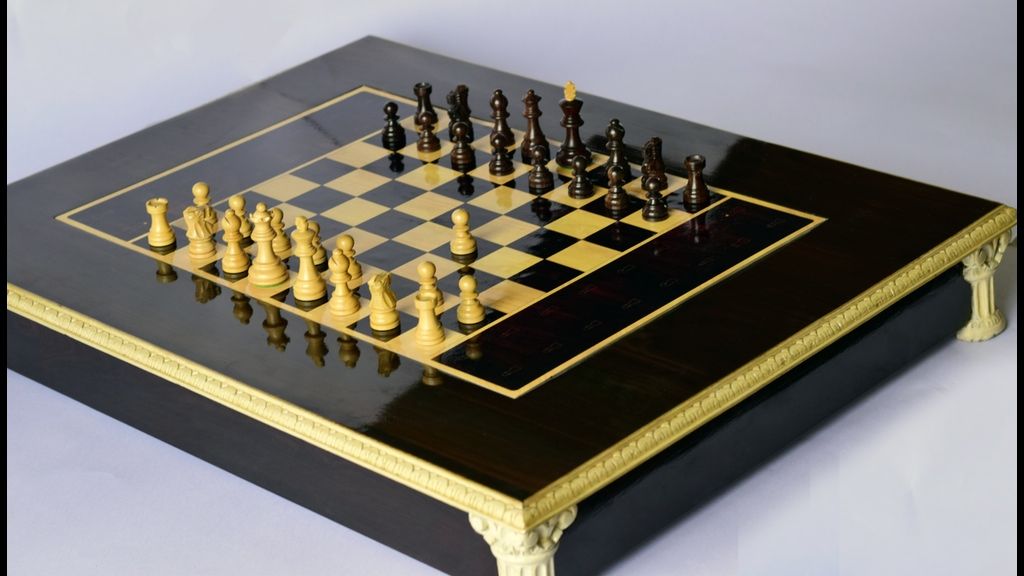 A refined board that was designed tastefully, but was heavy and couldn’t endure weather conditions. It was also very expensive because of the Rosewood body

The cost of these raw products was very high in India. Hence, they decided to visit China to procure the raw materials. 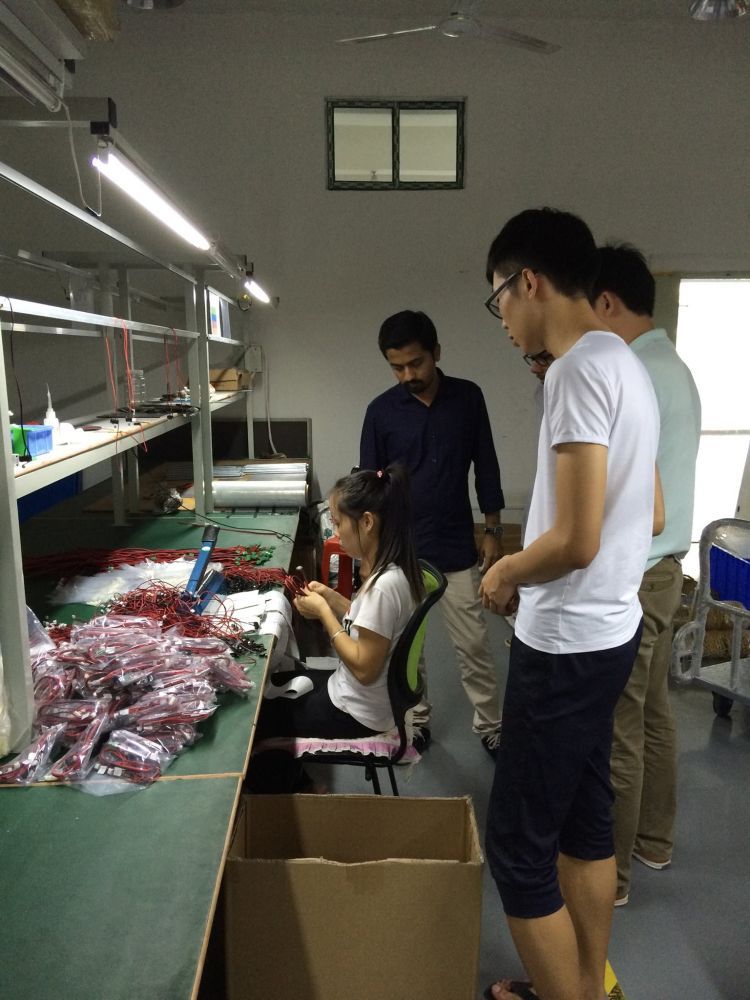 Shenzhen, China, being an electronics hub of the world, technical expertise was found without too much difficulty Finding wood for the board wasn’t easy. After a lot of research they fortunately stumbled upon a dealer who could supply the desired quality of wood 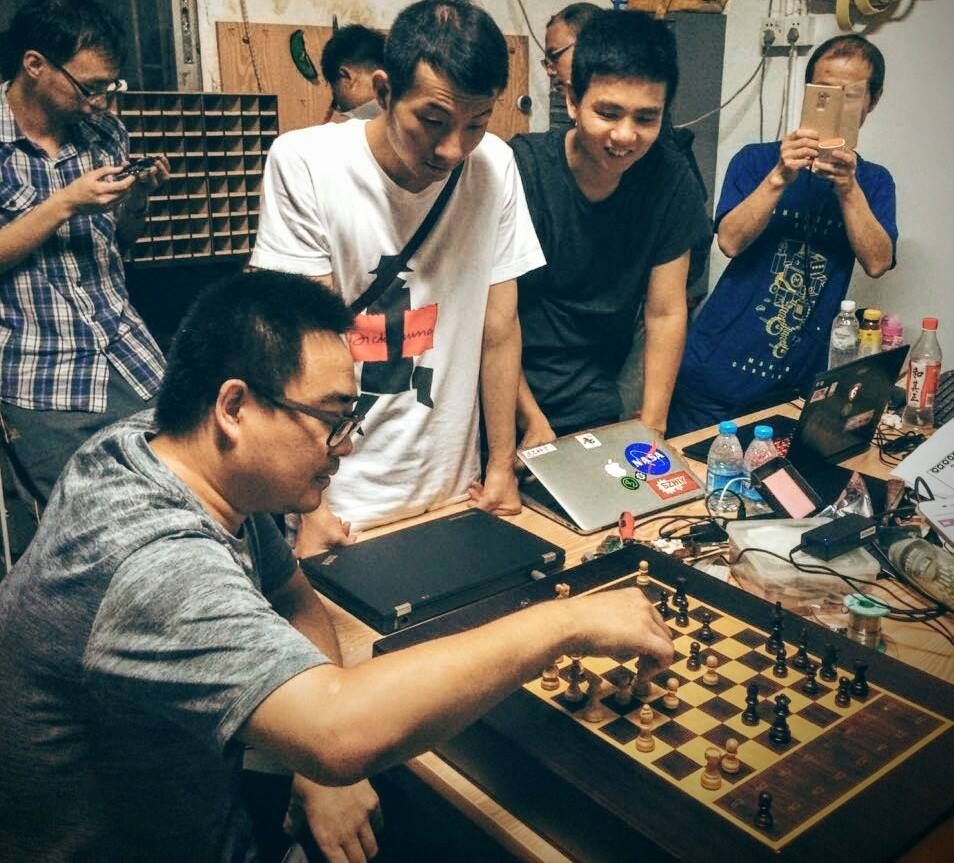 After three years of tedious efforts, finally the Beta product was ready in May, 2016. To test and gauge the response, a small batch of Collector’s Edition Square Off boards were produced and 20 of them were sold in no time. 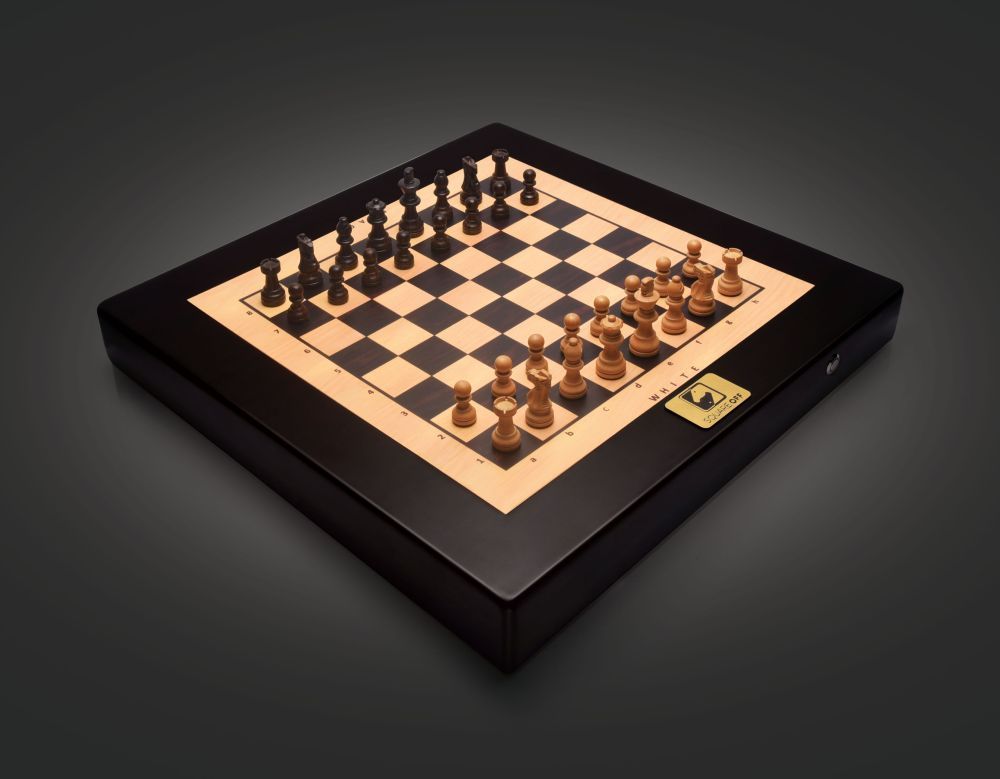 That's the final product! Built with medium density fibre with rosewood finish, the board is water resistant. It can withstand seasonal changes. And the real rosewood and maple wood chess pieces give it an elite look. 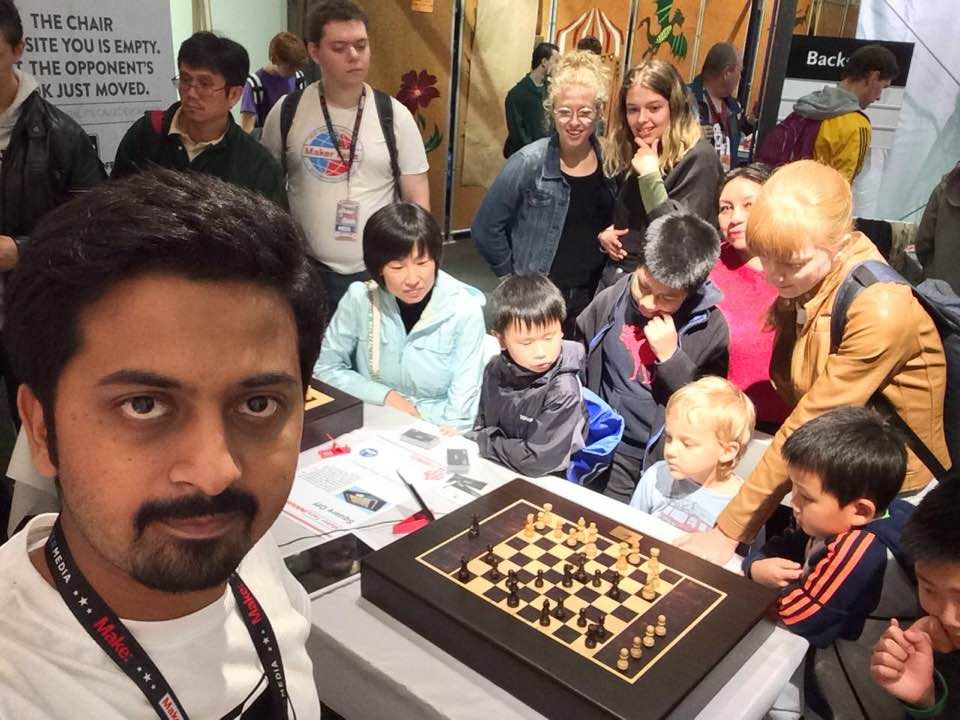 Just a few days ago, the automated chess board had the audience fascinated at the Maker Faire, New York 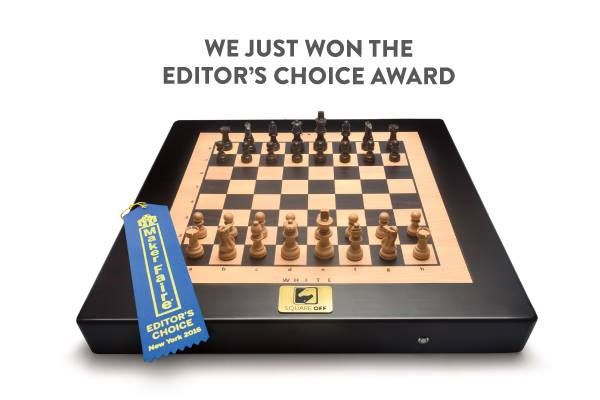 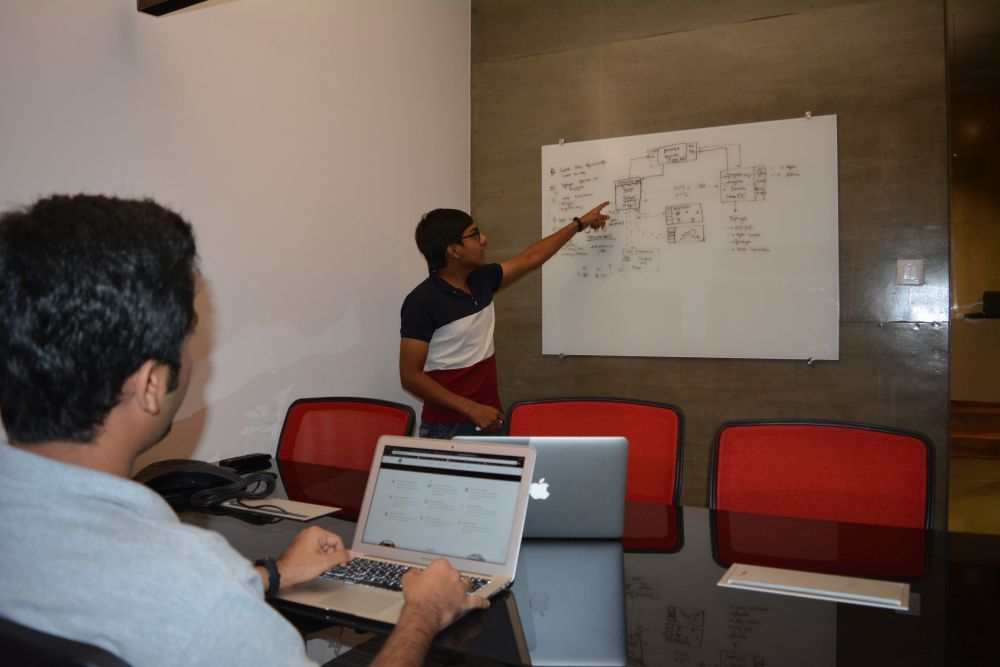 That was the journey of two individuals wanting to achieve perfection. It was a journey of not giving up on your dream product.

Chess is just the beginning. The vision is to add a variety of board games like Checkers, Backgammon, Snakes & Ladder, etc. to build a highly connected board gaming platform. All you would need to do is to upgrade the Square Off App, replace the top surface with another board game panel and you will be ready to play your preferred game with anybody in the world.

They need your support more than ever

Square Off has started their campaign on Kickstarter to raise €45,000. The project will only be funded if that amount is collected until the 18th of November 2016. €179 is what it will cost you to own a Square Off chess board. 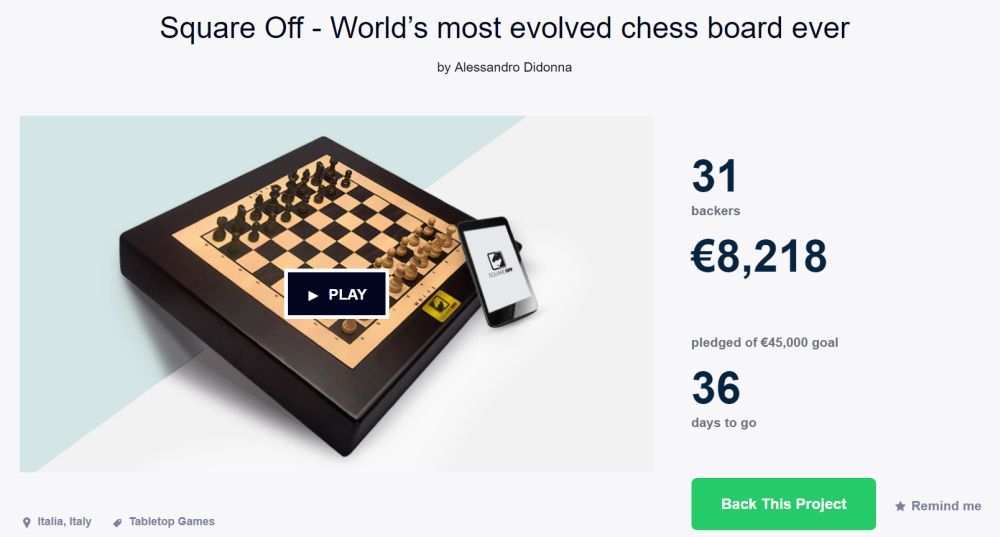 If Square Off is something that you would like to possess, visit their page on Kickstarter. You will be among the first few people in the world to lay hands on this distinctive chess set.
"Oh my God, It's the like board is alive!" Check out this highly entertaining video of Square Off

Your funding is what can help them undertake bulk orders through suppliers at the best possible prices. More importantly, they need funds to bear the setup costs to kick-off production and deliver to as many chess lovers as possible. The certification, necessary paperwork and government approvals can be possible only when they have a strong backing. Your support opens up the possibility to develop many fun board games that people would love to play.

Support Square Off on Kickstarter 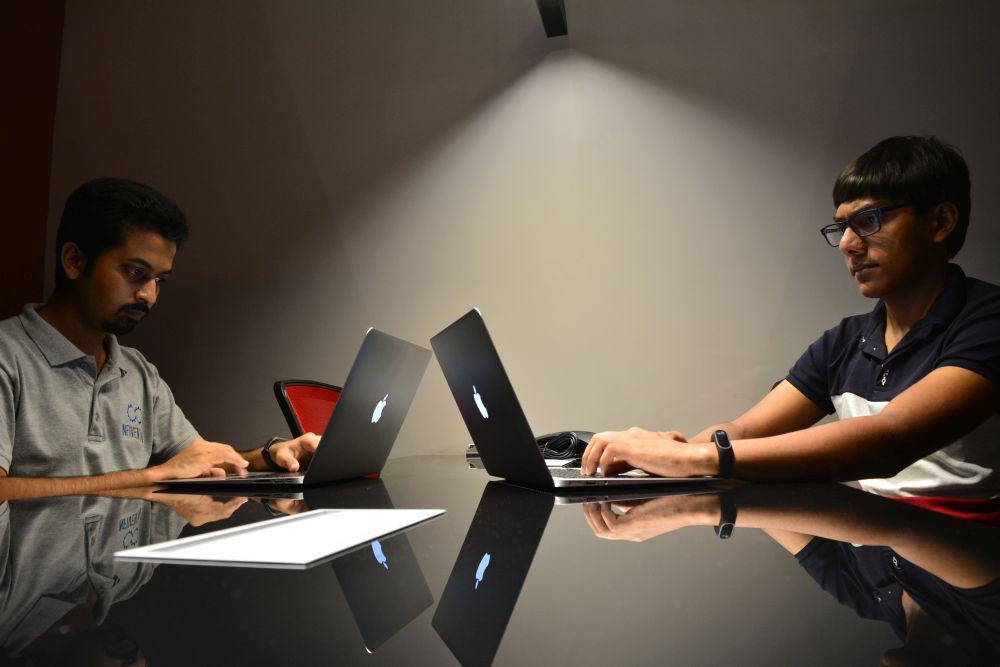 Bhavya Gohil (left) is an electronic engineer from the Mumbai University. He is the one with wild imagination and splits his time between growing the company and working with the team on all areas of product, engineering and customer happiness.

Aatur Mehta (right) is also an electronic engineer from the Mumbai University. He is a tech enthusiast who craves for knowledge, and is passionate about robotics. He believes in applying creative engineering to solve toughest problems in the simplest of ways.