It was a day when Vishy Anand and Magnus Carlsen showcased some brilliant calculating skills and self belief in order to win their games against Caruana and So respectively. We say self belief because when your opponent makes a move which you have thought was impossible, it is natural to doubt your calculation. But great players go beyond that doubt and play the move in case they find no holes in their calculation. Anand did just that, and so did Carlsen to score the only victories of the day. Blow by blow analysis of both the games.

Viswanathan Anand displayed brilliant imagination and flawless calculation in outplaying the American Fabiano Caruana in a delightful mating attacking in the 5th round of the Sinquefield Cup held at Saint Louis, US. This first victory for Anand in the tournament propelled him to a tie for 2-3 places along with World Champion Magnus Carlsen on 3 points from 5 rounds, behind the tournament leader Maxime Vachier-Lagrave on 3.5 points. 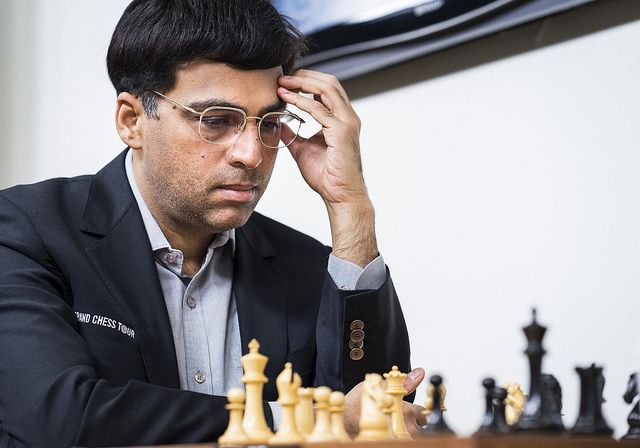 Anand deviated from his favoured 1.e4 in the opening and chose the English

Anand started off with a surprise in the opening when he employed the English Opening against Caruana, which he has employed only sporadically in his career. Slightly hesitant play in the early middlegame saw him concede near equality to Caruana after 18 moves. However, in his enthusiasm to complicate the position, Caruana started a misadventure on the 19th move, which Anand had dismissed as impossible, but was delighted to find the opponent doing it anyway. 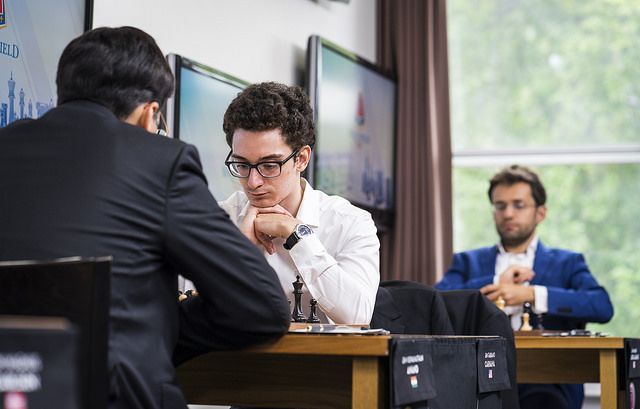 Caruana had equalized the game, but embarked on a faulty line to cede the advantage to the Indian GM

The positional laws governing play in the middlegame of chess often look simple and logical, but it takes courage to understand the risks and still go beyond them and create complications and chaos, if one can possess necessary tactical intuition and gumption for risk-taking. It is the trademark of tactical geniuses in the history of the game, who were able to create such complications ignoring strict positional laws. However, even in cases where the created complications are unsound in nature, it requires very steady nerves and crystal-clear calculating ability to defend against such attacks and repulse them, defensive abilities which are again not for the faint-hearted.

The Sunday encounter against Caruana was one such encounter where Anand showed nerves of steel and deep calculation in calling his opponent’s bluff. He accepted Caruana’s pawn sacrifice on the 21st move, and went even bolder and accepted the second pawn on the next move, only to find Caruana’s rook land on the crucial 7th rank, threatening Anand’s queen and also checkmate in one move at the same time. 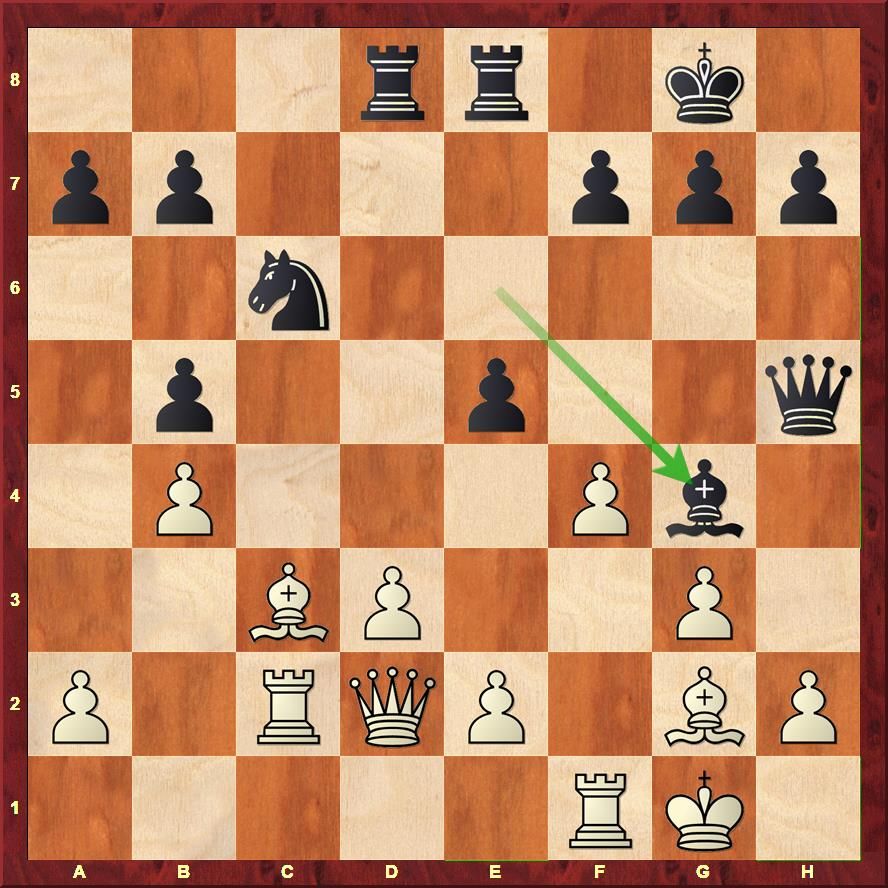 Caruana's ...Bg4 started the tactical melee. Anand went ahead boldly and took the knight on c6 and then captured the e5 pawn with fxe5 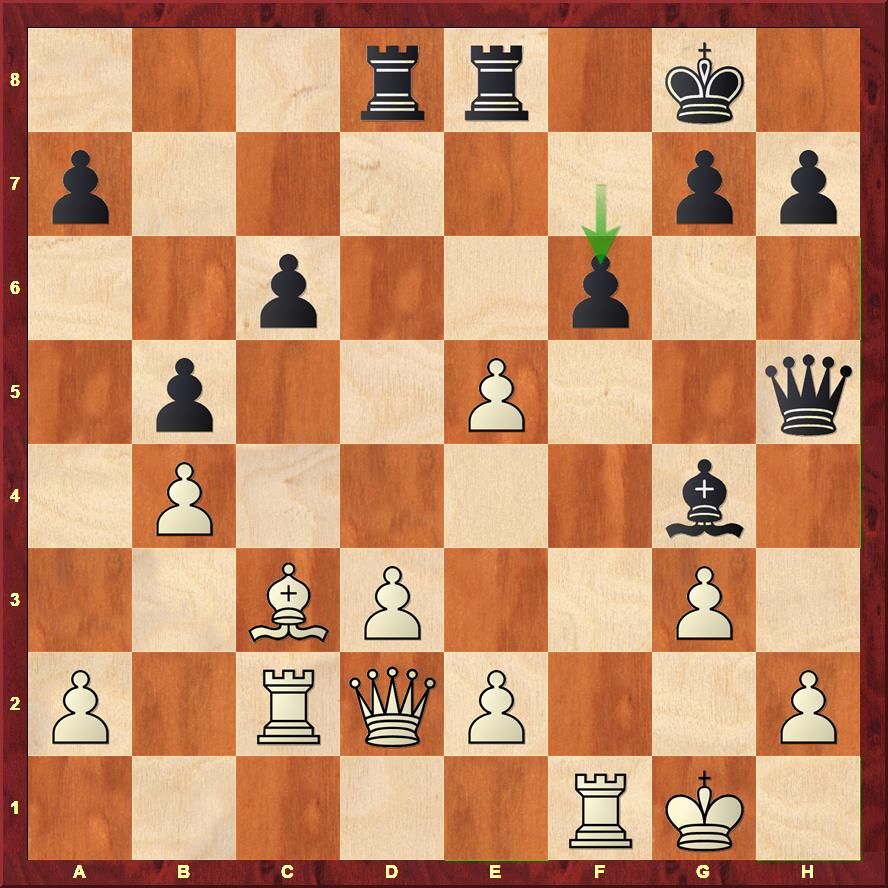 When a brilliant calculator like Caruana makes a move like ...f6, you need tremendous self-belief to go ahead and take that pawn. 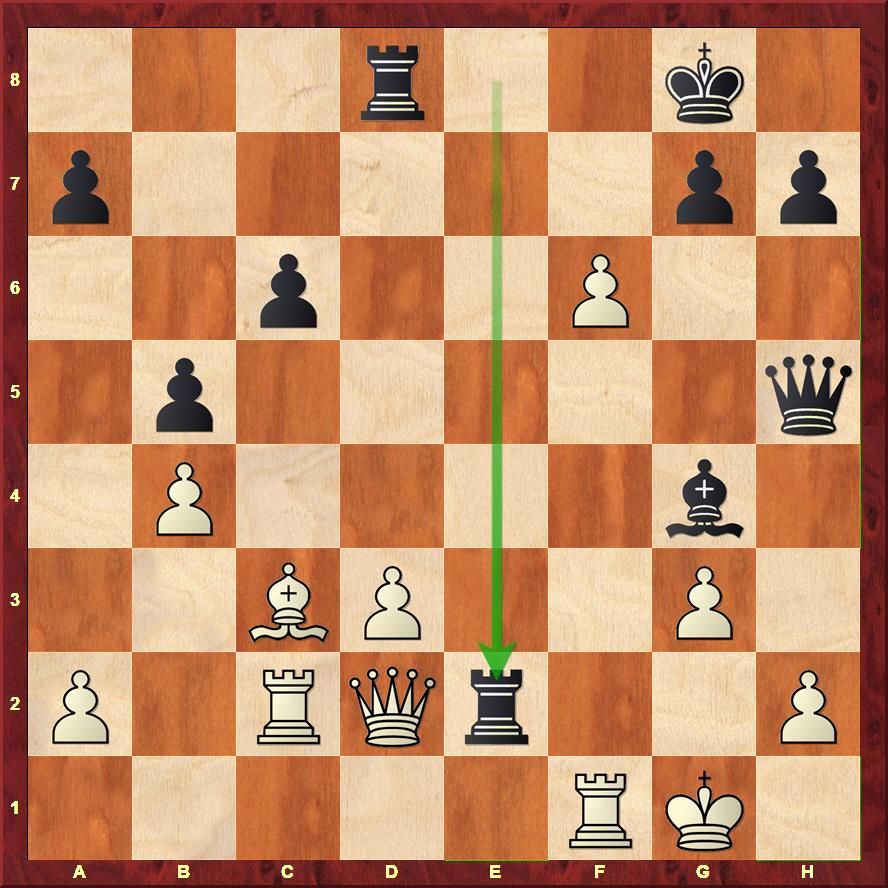 The rook came in on e2 and attacked not only the queen but also the h2 pawn with a mate. Anand was, of course, ready for this and played f7+. After Kf8, he was the one who went on the offensive with... 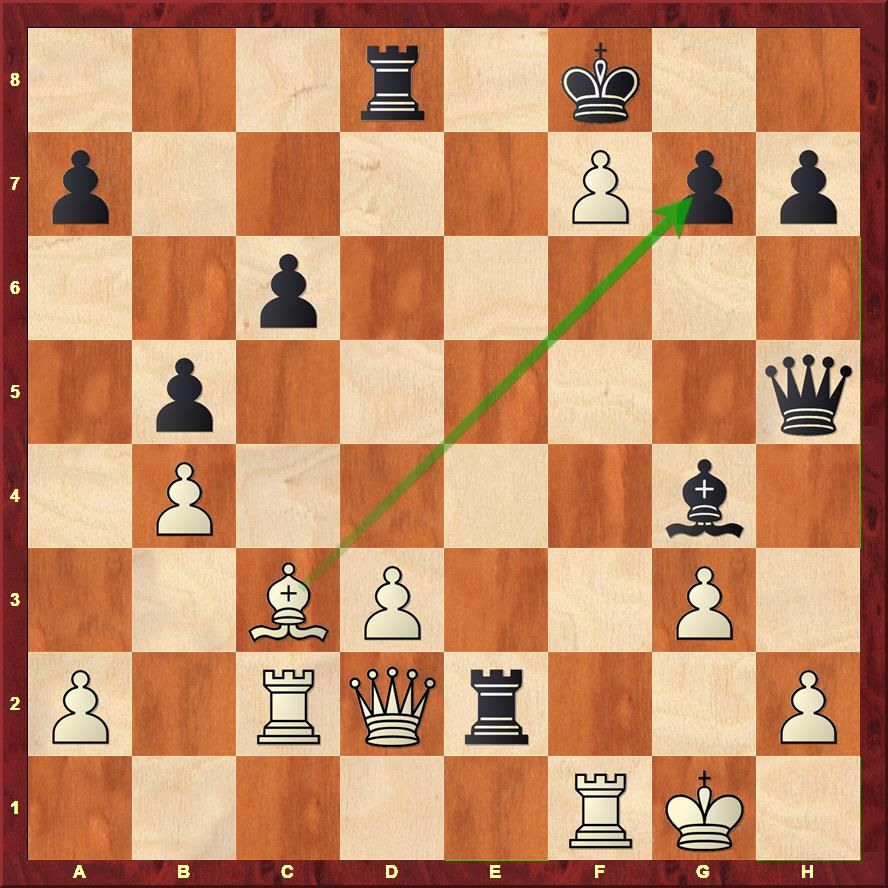 ...Bxg7+!! Caruana had to take that bishop and now the queen popped out to c3 with a check. Black had two options. Block on e5 with the queen or with the rook. Caruana chose ...Re5 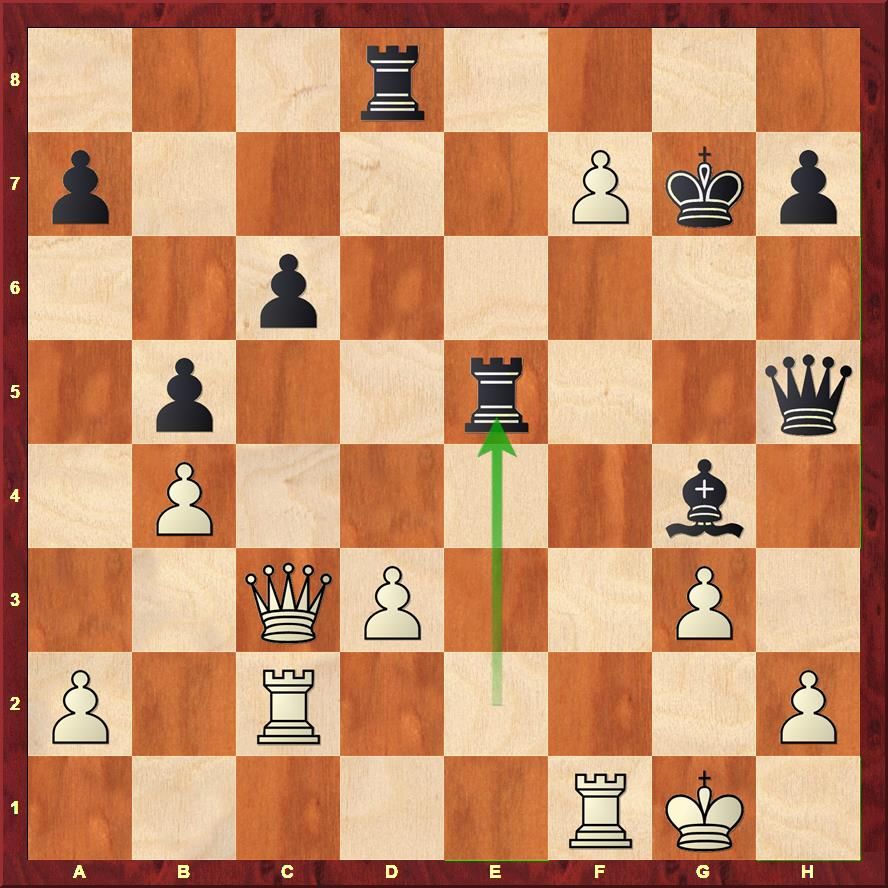 ...Qe5 would have been much more tenacious (check notes in the game below) Fabiano went for Re5. It's now your turn to find out what Anand had planned. 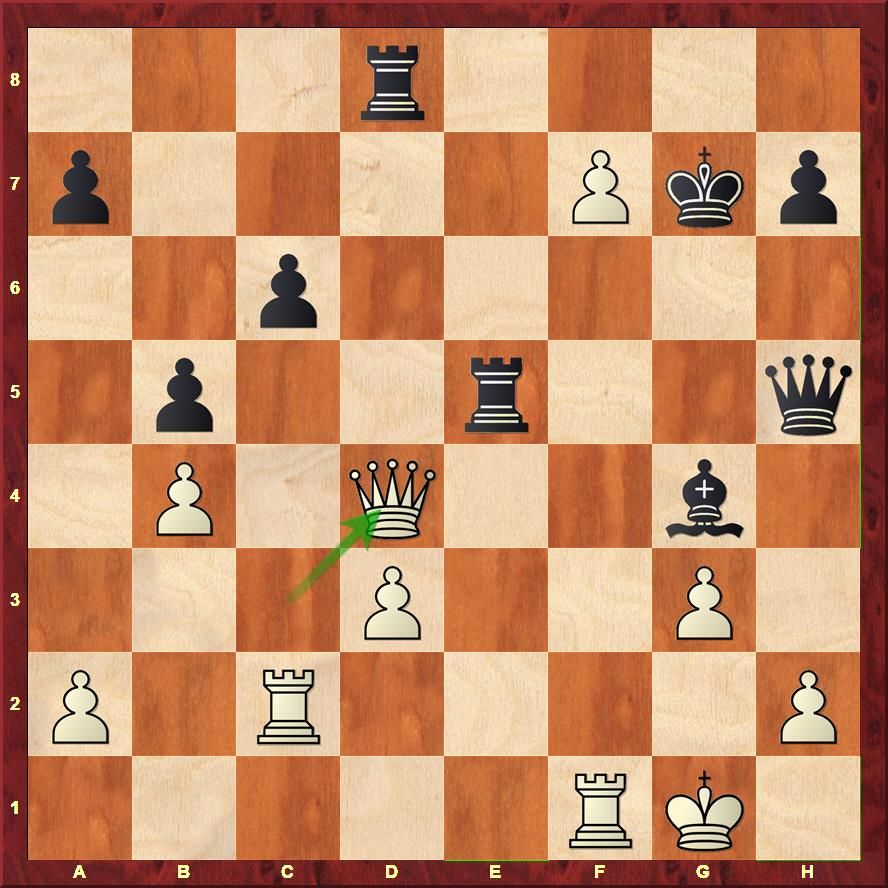 Qd4!! came like a bolt from the blue for Fabiano Caruana. The queen not only attacks the rook, but also vacates the c5 square for the rook! Caruana played ...Qg5 and Anand went ahead with... 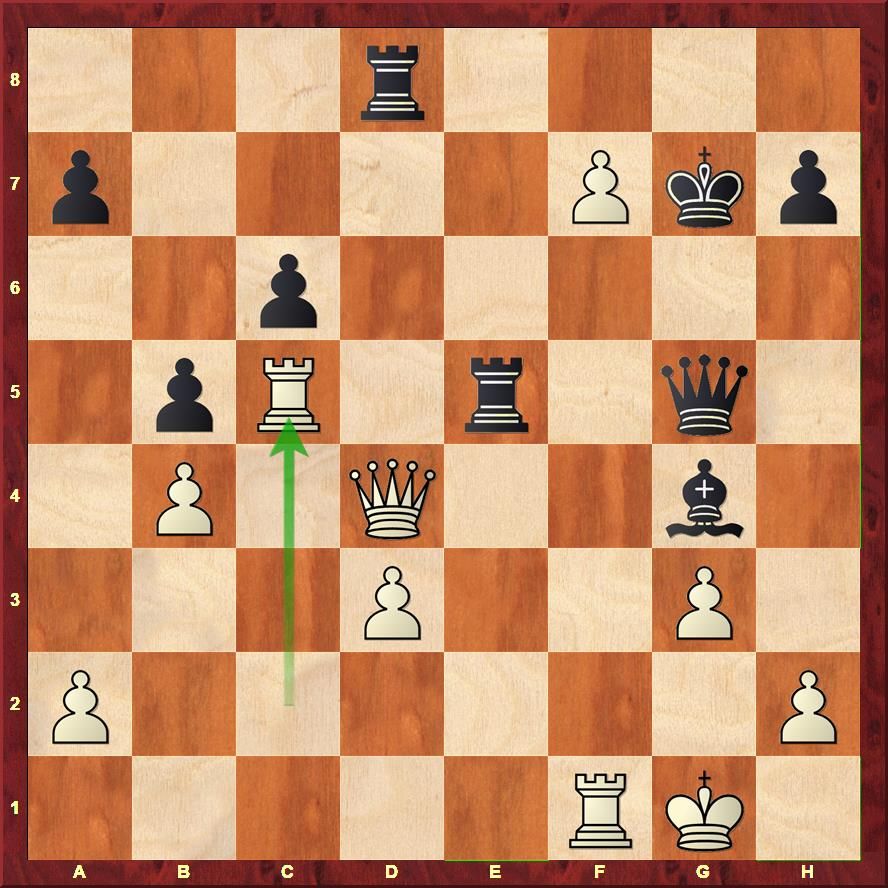 ...Rc5! It was game over for Caruana who took the queen on d4 and allowed Anand to make another queen on the board. 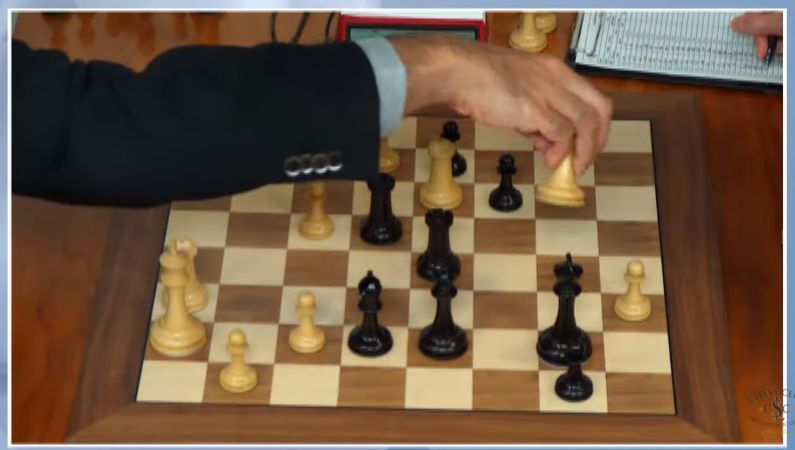 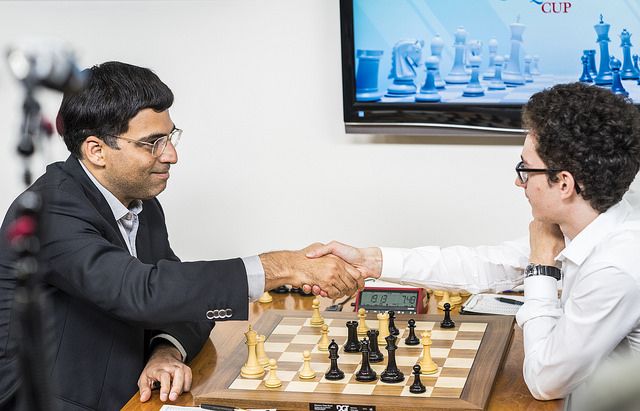 Fabi calls it a day. A brilliant win for Vishy Anand! 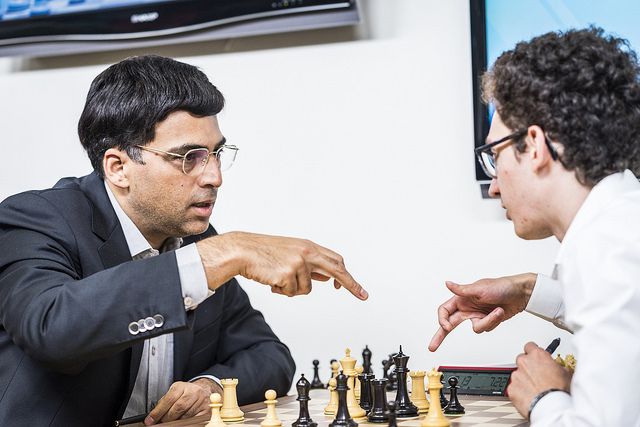 Great sportsmanship shown by Caruana as he not only analyzed the game after it was over, but also attended the post game interview with Maurice Ashley. 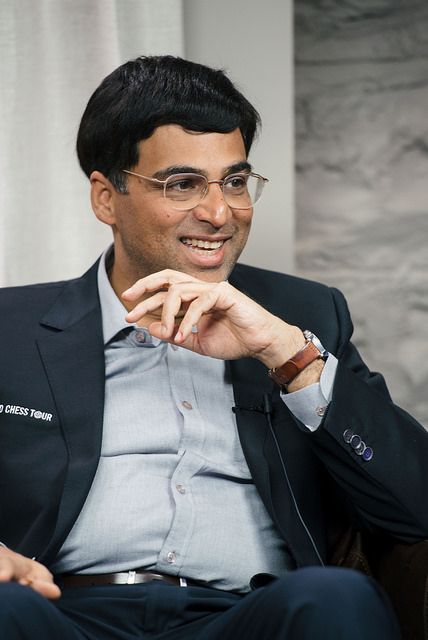 World Champion Magnus Carlsen came back very strongly from Saturday’s defeat to play a flawless game in the black side of a Scotch Opening and defeat another of the world elites, American Wesley So. Coming back immediately after tasting a defeat has always been one of Carlsen’s strong points, and the ability thus stood him in good stead in the 5th round. 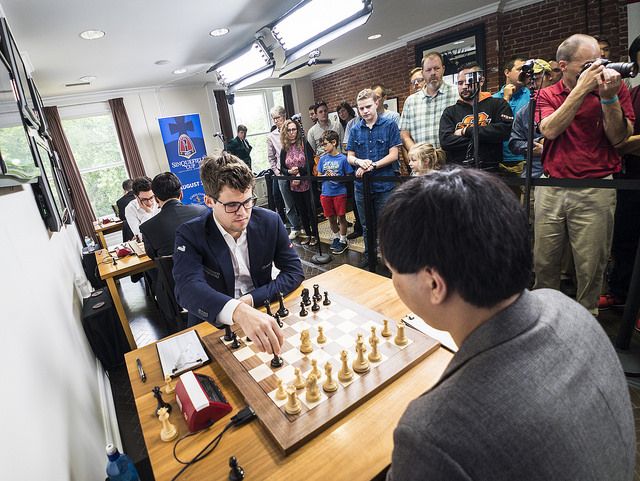 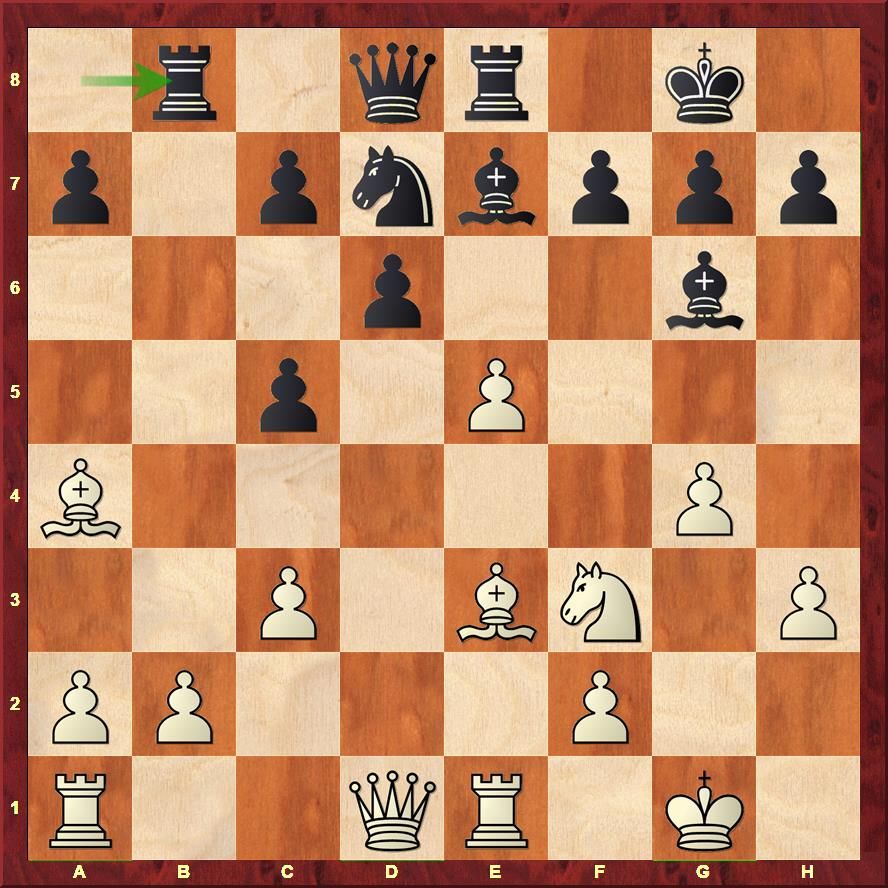 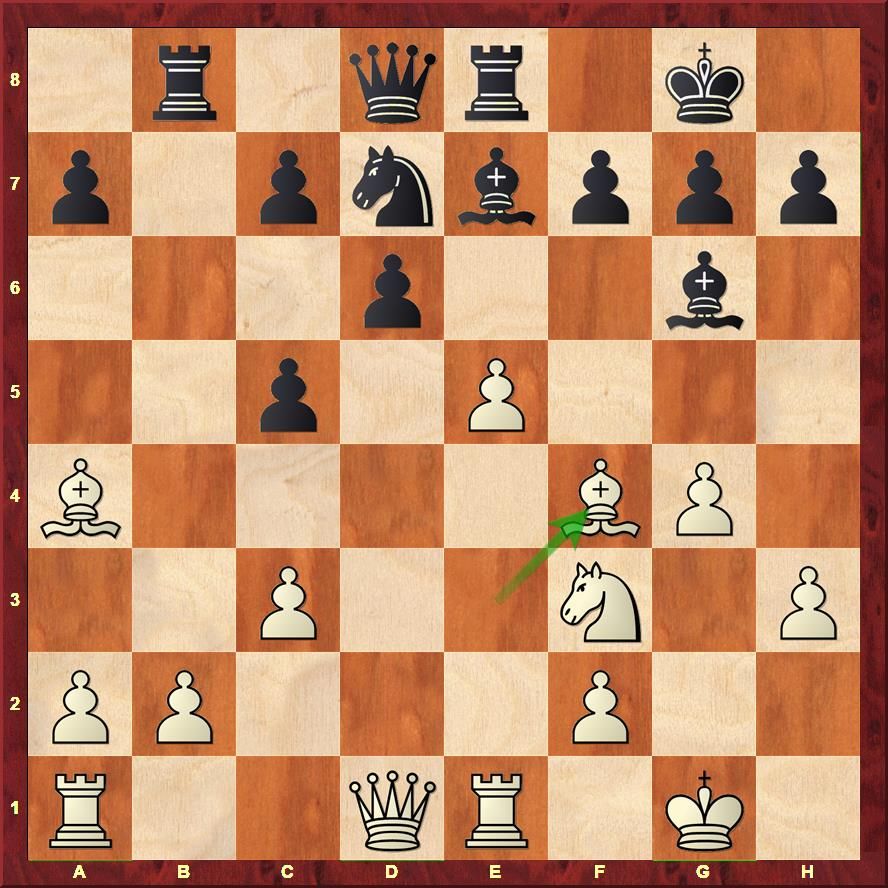 Instead of defending the pawn with b3 and gaining a fine position, Wesley played the inaccurate Bf4, which was a big error 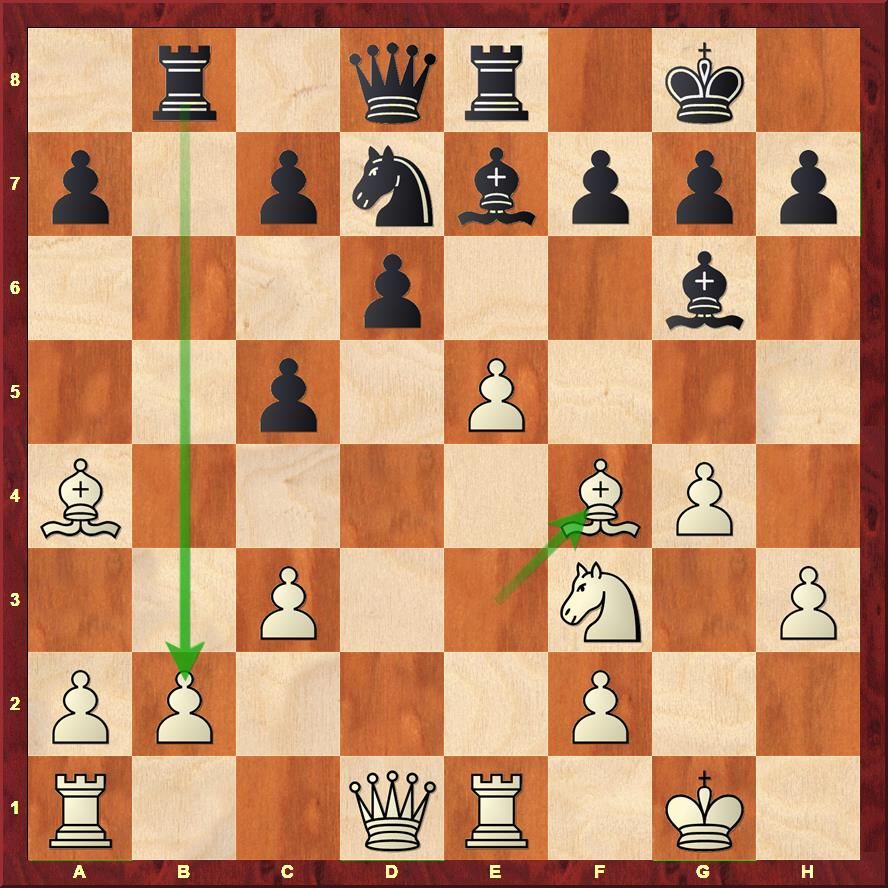 Carlsen thought for a long time about why Wesley had given up the pawn. Finally he came to the conclusion that he couldn't live like this with self-doubt! He took the pawn on b2 and asked Wesley to show his cards. 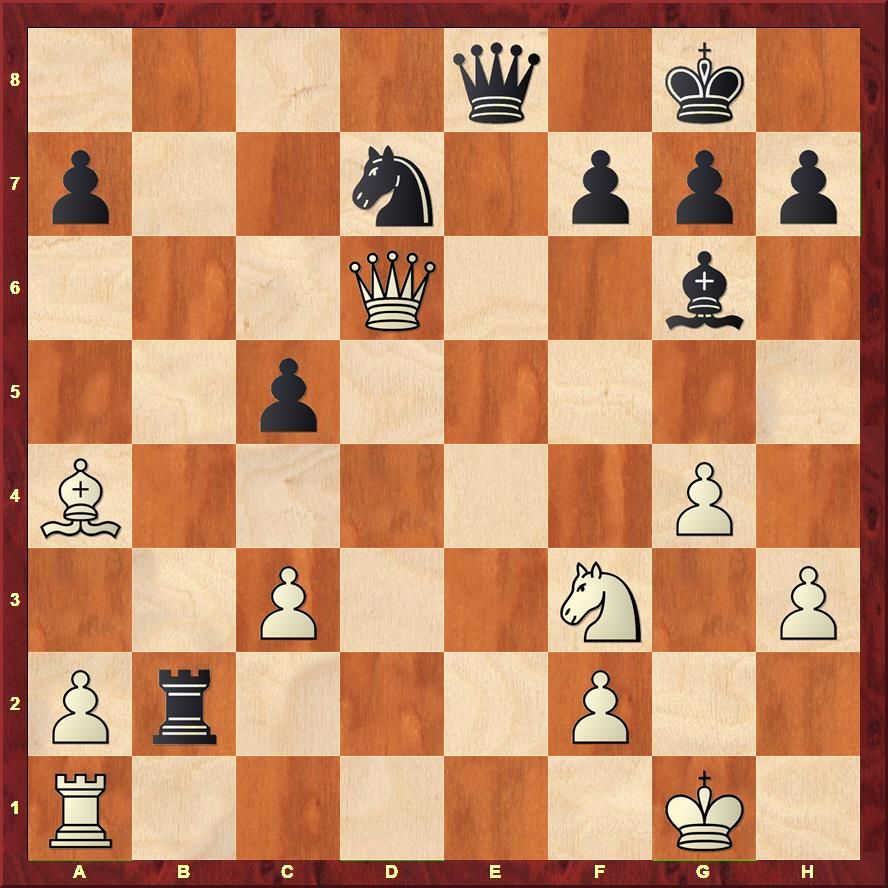 A lot of exchanges took place on the d6 square and the knight on d7 seemed to be in trouble. But Carlsen had seen a move ahead. Can you find Black's move? 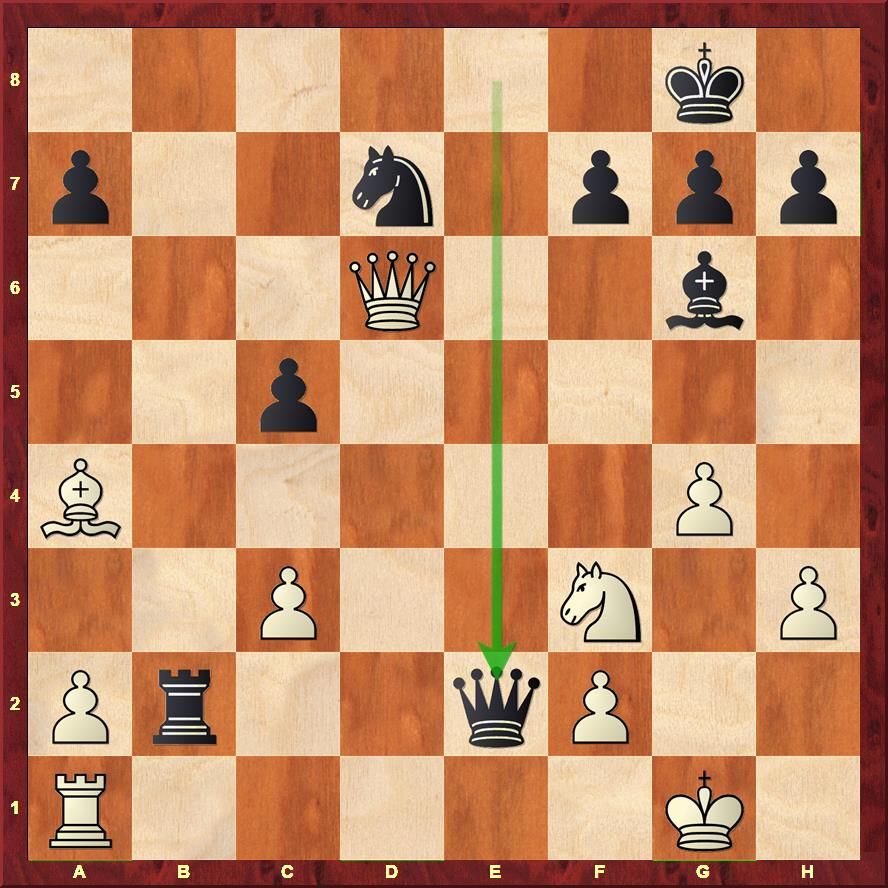 Thus, Anand and Carlsen are placed in a tie for the 2-3 places with 3 points, behind the leader Maxime Vachier-Lagrave who maintained his top position with 3.5 points after drawing with Levon Aronian.

Crosstable after round five: